Portugal’s Alentejo region occupies almost the entire lower third of the country, save its sunny, southernmost sliver, the Algarve. Home to some of the nation’s finest beaches, this striking region is equally blessed with rolling hills, mountain peaks, and cliffs that plunge into the sea. It’s surprising, then, that most travelers overlook Alentejo’s outdoors in favor of its small, historic cities; piquant cuisine; and, more recently, wine country.

Don’t undersell Alentejo by skipping its beaches, rivers, and countryside, which together offer excellent surfing, kayaking, hiking, biking, and even rock climbing. If you’re an active traveler, or just want to get in some movement to make room for your next meal, here’s our guide to the incomparable Alentejo’s outdoor offerings.

The most scenic trails for hiking and mountain biking 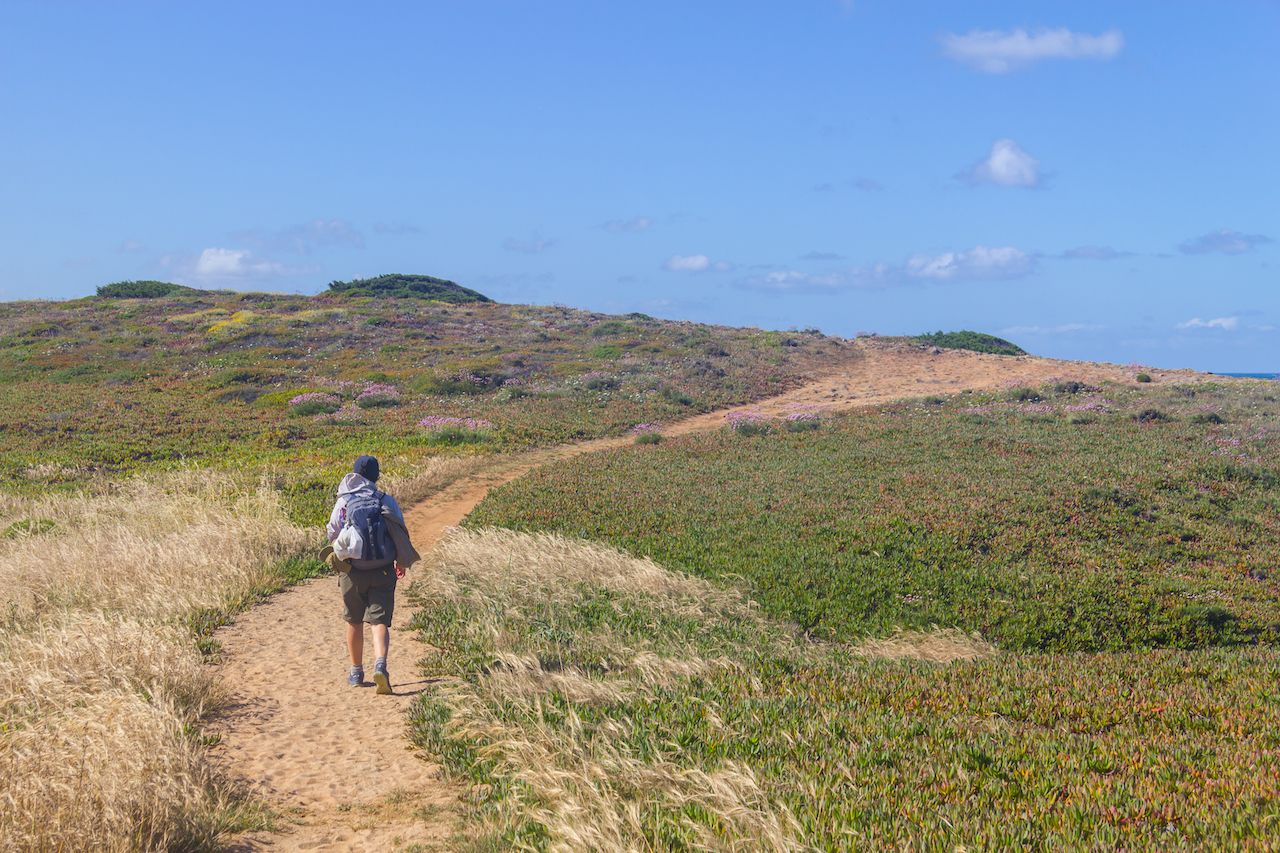 Alentejo’s west coast ambles through hills flush with wheat fields and wildflowers, holm oak forests, and cork trees, from which the country’s most iconic souvenirs are sourced, before kissing the ocean, fringed by towering cliffs where land meets sea. Much of the coast belongs to the Southwest Alentejo and Vicentine Coast Natural Park, which stretches roughly 60 miles south all the way down to the Algarve.

A long-distance trail network, the Rota Vicentina, cuts through the park, offering unparalleled paths for hikers and mountain bikers. There are two main trails, the Historical Way and Fisherman’s Trail, as well as a smattering of circular routes that can be tacked onto longer itineraries or tackled as day excursions. All routes are clearly marked, and the landscape is largely flat, making it approachable for most hikers and mountain bikers.

The longest route, the Historical Way covers roughly 140 miles of hills and valleys, cork forests, and coastline. It’s split up into 12 sections from Santiago do Cacém to Cabo de São Vicente in the Algarve. Each section represents a full day’s journey of around 15 miles, and those looking to complete the route will find modest accommodations in villages like Odemira and Odeceixe along the way. Particularly special in spring when the region’s wildflowers are in full bloom, the Historical Way is suitable for both hikers and mountain bikers.

Hugging the coast even more closely, the Fisherman’s Trail covers more demanding terrain that should only be attempted on foot. It comprises nine sections, four main legs and five optional circuits, spanning nearly 80 miles from fishing village Porto Covo to Odeceixe. Additional routes guide hikers around Amoreira and Telheiro Beach, among others, as well as rivers slightly inland where hikers can rest and dabble in some birdwatching.

Even if you don’t have days to dedicate to the Rota Vicentina, consider spending an afternoon traversing one of the shorter circular routes. The nine-mile hike around Odeceixe Beach is perfect for sun-seekers while the five-mile Dunes of Almograve route, which intersects the Fisherman’s Trail, houses herbaceous flora like lavender, rosemary, and thyme. Another highlight, the Endiabrada trail swaps sea views for hidden lakes and offers access to beach town Bordeira, which serves as the starting point for yet another route that leads back to the ocean on a hike that can be done in four or eight miles, depending on your stamina.

The best beaches to surf, SUP, and bodyboard 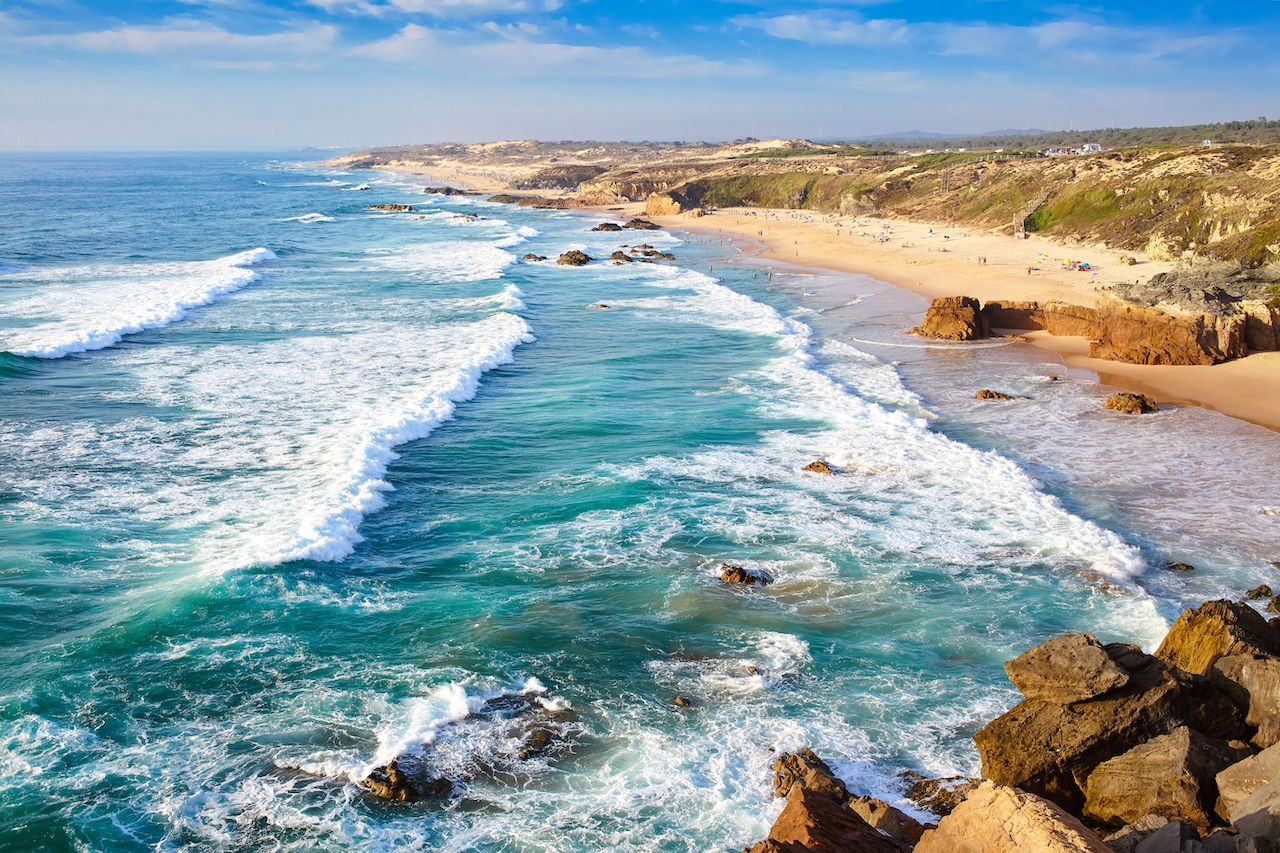 Surfers are well aware that Portugal has some of the best, and biggest, breaks in the world. The current record for the tallest wave ever surfed was set last November by Brazilian surfer Rodrigo Koxa, who sailed down an 80-foot monstrosity in Nazaré, Portugal, about 75 miles north of Lisbon. While that landmark locale falls outside Alentejo’s bounds, the region remains a surfer’s paradise with uncongested beaches and challenging, consistent breaks.

The surf tends to be tougher in Alentejo than the Algarve, which also draws considerably more holidaymakers. While it might not be ideal for first-time surfers, beginners are in good hands with several surf schools set up along the coast. Most offer SUP rentals, as well. Two options for newer surfers are Alentejo Surf Camp, based in Vila Nova de Milfontes, and SurfMilfontes, which operates off of Malhão Beach about four miles outside town. The swells here are reliable, particularly during fall, through the currents and winds can be formidable. You can reach the beach, which is located along the Rota Vicentina, on foot or by car.

More experienced surfers may prefer Aivados Beach, a popular spot for surf competitions about 20 minutes north of Vila Nova de Milfontes by car. It’s a fun beach break, but — like at Malhão — there’s little infrastructure here. Pack everything you’ll need for your outing. Alternatively, hit up the bohemian surf town of Carrapateira on the border between Alentejo and the Algarve. It’s near two beaches that are solid for all skill levels and have snack kiosks.

Where the beaches by Vila Nova de Milfontes and Carrapateira offer endless expanses of white-gold sand, local-holiday resort Porto Covo houses smaller, rockier beaches just north. The main beach, Praia Grande, attracts its fair share of surfers but also SUPers, bodyboarders, and family vacationers as there’s a lifeguard on duty during summer and plenty of nearby facilities. Also near Porto Covo is Samoqueira Beach, perfect for poking around tide pools during ebbs. 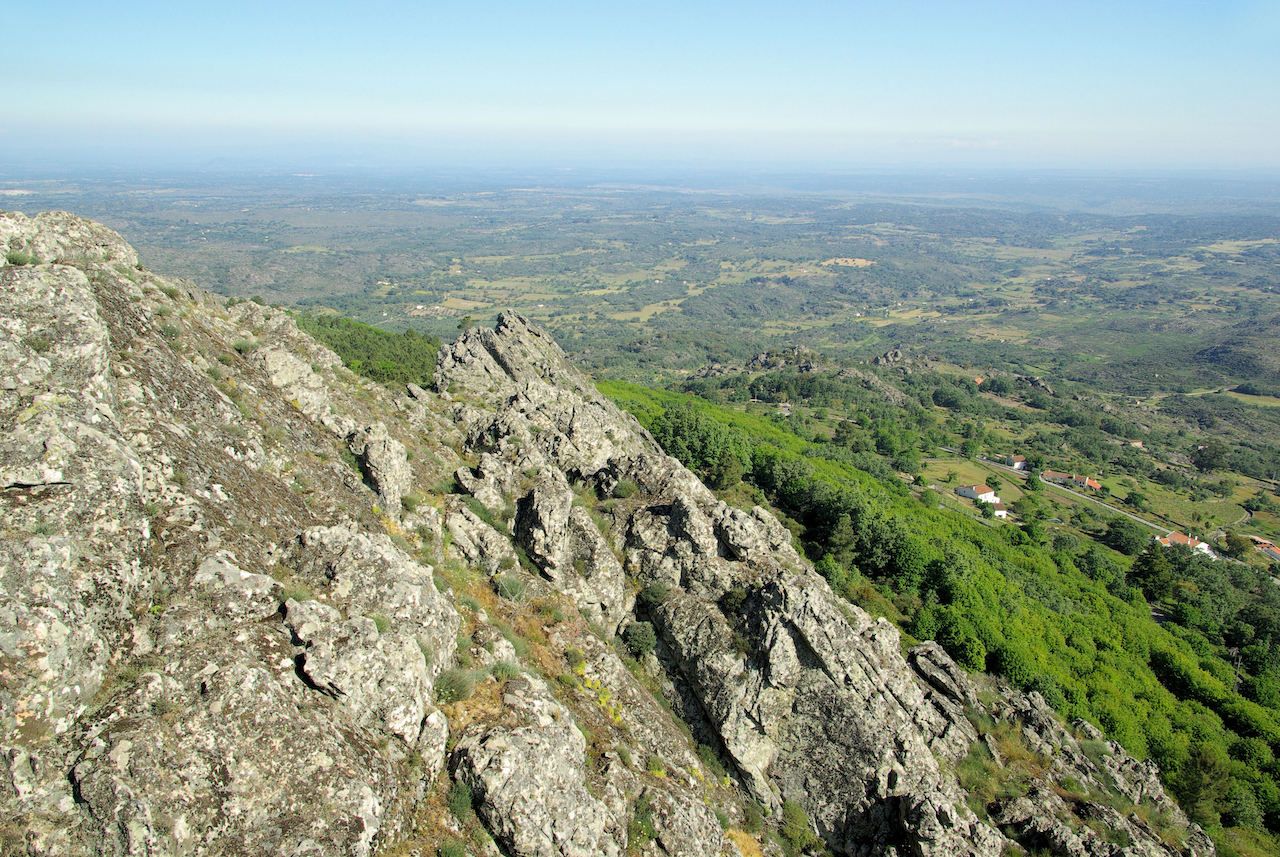 Apart from local climbers, few people know that climbing is even possible in Alentejo. Those that do beeline for Serra de São Mamede, a protected mountain range in the Portalegre district that runs between the basins of the Tagus and Guidiana rivers. A handful of hiking trails, some of which are also open to mountain bikers, have earned the Serra de São Mamede Natural Park its reputation as an outdoors haven, but what really makes it so special is that it hosts some of the region’s only established climbing routes on the Penha de Portalegre cliff face.

Take in views of the town below, and perhaps even catch a glimpse of the 17th-century Nossa Senhora de Pena chapel as you scramble up, admiring the range’s quartzite and dolomite. Base yourself in Portalegre for ease of access or opt to stay in Marvão, a historic town located a half hour into the park near the Spanish border, to make the most of your time in this slice of Alentejo.

The best canoeing and kayaking around 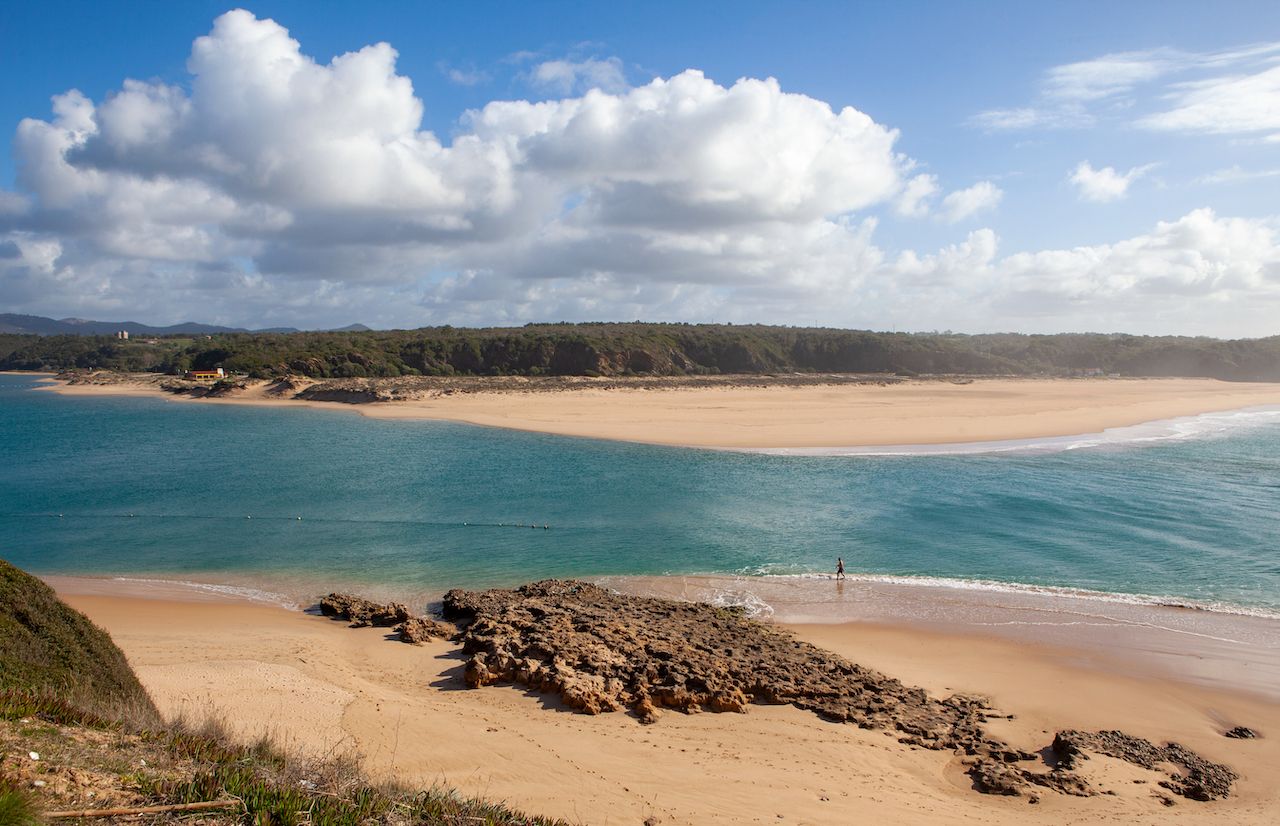 When you’re ready to get back on the water, trade in your surfboard for a canoe or kayak and head to the Mira River. If you’re sold on the Rota Vicentina, you can easily work either water sport into your trip with access points and rental options in Vila Nova de Milfontes or Odemira. Parties traveling with young kids can plan fun, easy, up-and-back canoe trips between Odemira and São Luís while those looking for a slightly greater challenge can depart from Vila Nova de Milfontes by kayak. It can get windy, but children as young as six are generally still welcome to join.

Several fish species live in the Mira’s waters, including the bream and sea bass you’ll see on menus all over Alentejo. Seabirds like storks, kingfishers, and herons are also easy to spot peeking out from marshy reeds or soaring overhead, so canoe and kayak trips are an excellent choice for sporty wildlife enthusiasts. Plan to visit from March to November for optimal conditions.

The horseback riding you won’t want to miss 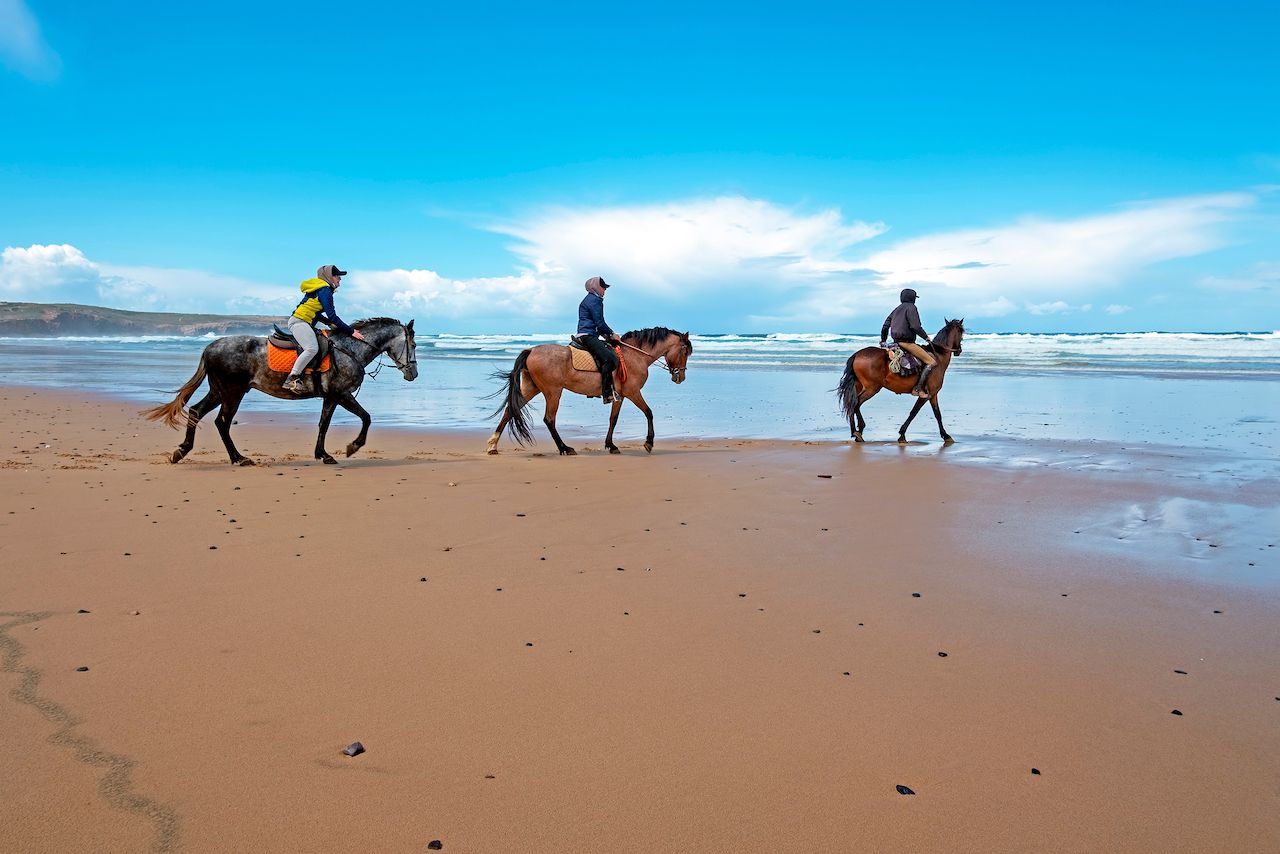 Cycling down wide, dusty roads in the Alentejan countryside, you might think life, let alone your vacation, couldn’t possibly be more pleasant. Think again. Taking in the surroundings atop one of the region’s Lusitano horses is guaranteed to make you feel that much more connected to the natural world and transform any ordinary afternoon into something unforgettable.

Just outside Évora, a medieval city and UNESCO World Heritage site that probably sees more tourist traffic than any other Alentejo destination, riders can combine the great outdoors with a good dose of culture as they trot by nearby farms and smaller villages or canter along riverbanks, all in the company of local fauna like rabbits and foxes. Several companies also offer seaside rides over sandy dunes, where you might spot rare birds and marine life. No matter where you end up staying in Alentejo, search around or ask your hotel about the best riding school near you.

The most spectacular bird-watching spots 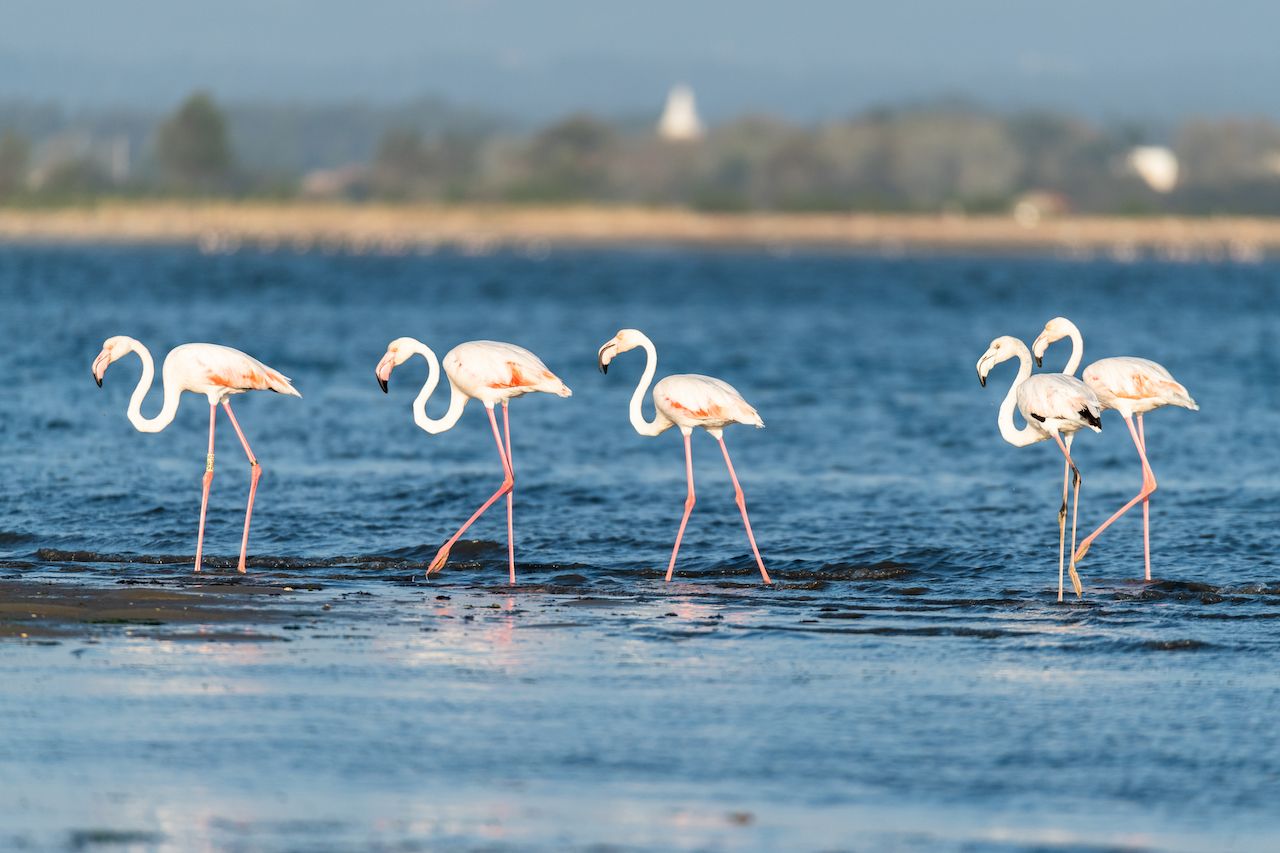 With such a rich, sundry terrain, it’s no wonder Alentejo is home to prolific birdlife. If you only have time to visit one bird-watching area, we recommend choosing between Castro Verde; the Sado Estuary; or the habitats of Mourão, Moura, and Barrancos.

Castro Verde belongs to the Baixo Alentejo subregion in the southern half of Alentejo. It’s known as Campo Branco, or “White Plains,” owing to its characteristic cereal fields that, together with the steppe birds that inhabit the plains, have earned Castro Verde its protected status. Keep an eye out for great bustards, a majestic species that’s as large as you’ll find in Europe and one of the heaviest flying birds anywhere in the world. Also found in Castro Verde is the Iberian imperial eagle, an endangered bird of prey that any birder would be thrilled to spot.

Roughly one-and-a-half hours east of Castro Verde, Mourão, Moura, and Barrancos comprise a protected area that belongs to the Baixo Alentejo subregion, as well. The landscape is similar in places though you’re likely to see more grazing sheep and cattle, as well as the odd vineyard and olive grove. Raptor species like black, red, and black-shouldered kites migrate here for the winter, and it’s not uncommon to see black vultures soaring alongside eagles over rocky outcrops, as well as a few water-loving species that have made their homes by the area’s rivers.

For an easy day trip, set your sights on the Sado Estuary, situated about an hour south of Lisbon and an hour west of Évora. Here, you’ll find around 200 bird species thriving in the wetlands, including white storks, glossy ibis, and flamingos. The Sado River isn’t just a haven for bird life, however. Visitors also have the chance to see dolphins splashing about in the river, a rare sight in Europe and part of what makes this spectacular wildlife reserve a must-see during your Alentejo travels.

Road TripsThe Iberian Rift Is the Best Road Trip Between Spain and Portugal
Tagged
Outdoor Trip Planning Portugal
What did you think of this story?
Meh
Good
Awesome