As the driest place on earth, you might expect the Atacama Desert to be a barren affair. Yet, every couple of years, a tiny section of Chile’s far north coastal desert erupts with the desierto florido, or desert bloom. This springtime phenomenon paints the dunes of this coastal region with a myriad of colors from cerise pink to snowdrop white.

Chile’s botanical spectacle takes place in the Coquimbo region with the Llanos de Challe National Park at the heart of the magic. Due to the unique climate of Llanos de Challe and its usual parched status, this floral sensation is rare and never guaranteed.

While the Atacama Desert – known for its volcanoes, geysers, and hot springs – stretches across 40,440 square miles, the humble Llanos de Challe claims less than one percent of that land. Coined the “Little North” of the country’s “Big North,” the reserve is a 10-hour drive south of San Pedro de Atacama.

Flower power in the Atacama Desert 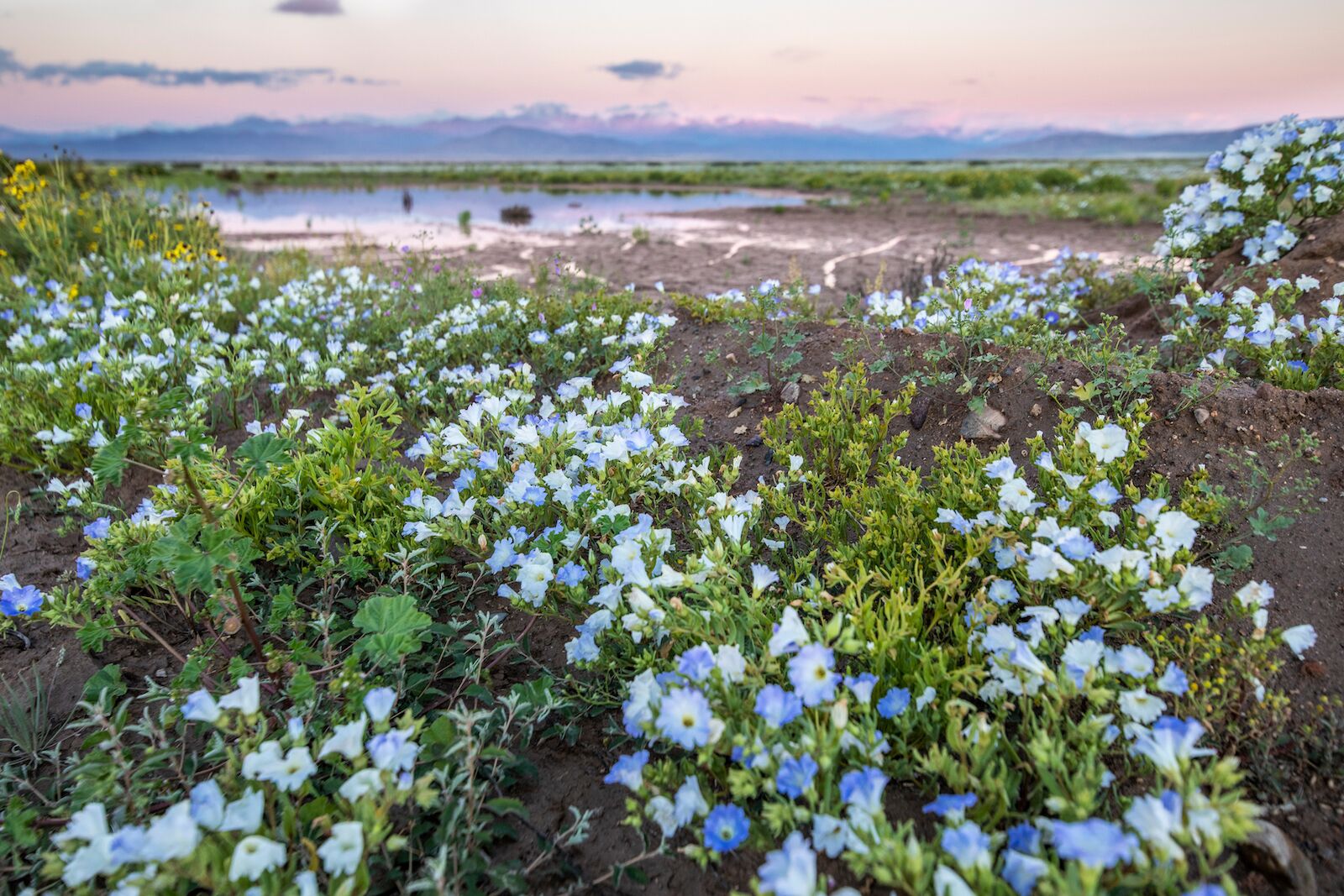 Murmurs of Chile’s flowering desert start in August with the main show surfacing in early spring. Down in the Southern Hemisphere, this means late September through the end of November is the best time to plan a trip. It comes about at its greatest following hefty rain. Heavy downpour this past winter hints that 2022 could be the “super bloom” Chileans have hoped for, and that the pageant of flowers may become more regular.

Endemic to Chile and Argentina, añañucas (Rhodophiala) are the emblem of the world’s driest non-polar desert. Lemon-colored añañucas amarillas and ruby-red añañucas rojas take center stage and you’ll soon spot fields of these as you follow the seaside road.

Clans of scarlet garra de león (Leontochir ovallei), or “lion’s paw,” dance alongside butterfly-resembling cacatùa (Schizanthus) and swathes of fuchsia pata de guanaco(Cistanthe grandiflora). Braving the harsh desert and coastal winds, dainty huilli(Leucocoryne appendiculata) burst from the soil alongside the sturdier oreja de zorro (Aristolochia) – affectionately termed “fox ears.” There’s no need to be a botanical genius or a pro photographer to appreciate this sea of flowers and enjoy learning their playful names.

Even when rainfall is less abundant – as has been the case for over a decade during Chile’s megadrought – the presence of light drizzle and thick ocean fog continues to nourish the terrain. More than 1,100 vascular plant species, of which 980 are native, persistently nudge at the desert rubble and reveal this vivid patchwork of color.

Besides the flowers, the desert provides habitat to species including guanaco(lama guanicoe) and the near-endangered pampas cat,gato colo colo. Aguilucho (red-backed hawk) and cernicalo (kestrel) circle overhead while chincol (Andean sparrows) peck for insects. These shy creatures keep their distance and chances of encountering the wild cats are slim, but that doesn’t detract from the experience of stretching your legs with a light hike in the park. 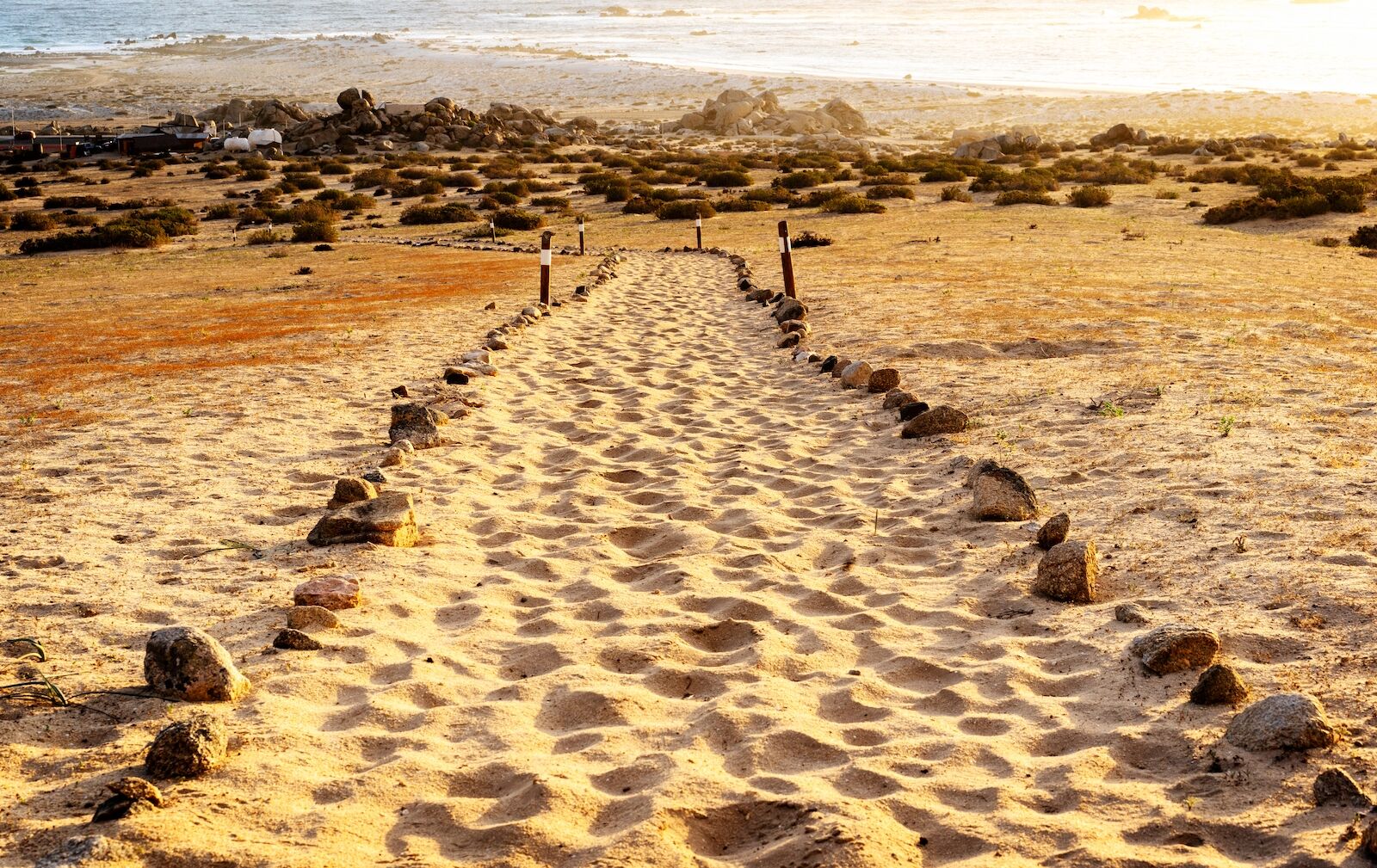 The vast majority of Llanos de Challe is undeveloped and left as a habitat for flora and fauna. There are however three trails varying from 1.5 to 6.8 miles. The Sendero Interpretativo Centenario is an easy loop that takes less than two hours to complete and grants wonderful views over the Pacific Ocean. Tread a little deeper with the longest of the trio. Sendero Alberto Villegas passes underground water outcrops before gaining elevation for panoramas across the reserve. Picking flowers is forbidden, and you must remain on the marked paths to avoid disturbing the seeds.

Payable at the ranger’s station, a permit of 3,700 CLP ($3.70) is required to hike in the park. Beyond the trailheads, you have free reign to explore the wider landscape which changes at every mile. Parts of the park nod toward the Grand Canyon, other segments feel practically Martian, while snow-capped peaks loom on the horizon. Stick to the highway and resist the urge to amble into the depth of the park, as like many hiking trails in Chile, this is no place to wander off track.

Getting to and around the park 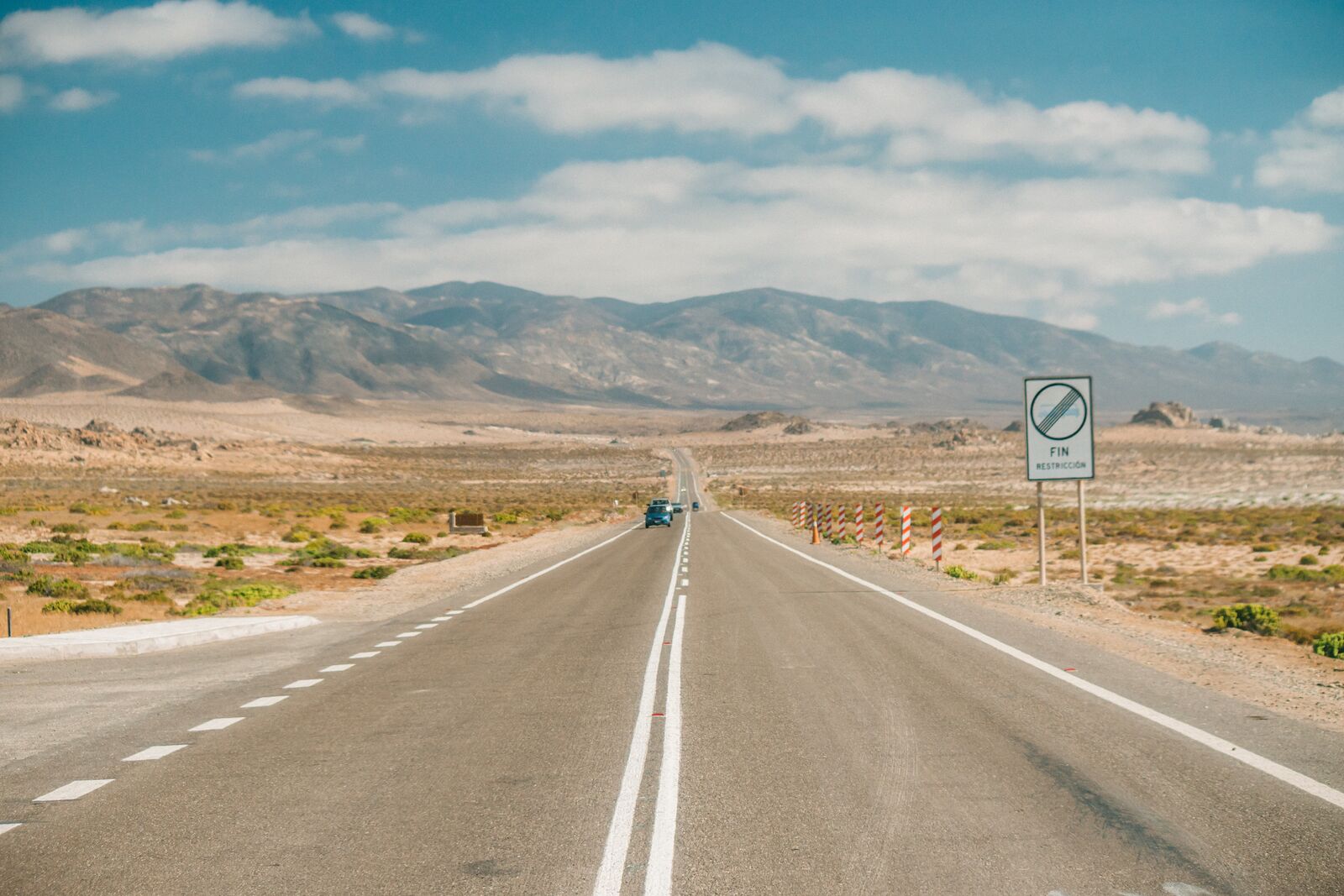 Renting a vehicle and self-driving is the typical method of getting around Llanos de Challe. This way, you can pull over as you like for a closer look at the flowerage. Owing to the fragility of the ecosystem, vehicles (including sand buggies) are not permitted on the dunes. Ruta 5 on the Pan-American Highway splinters off at Vallenar toward Huasco from where a scenic coastal road connects the Llanos de Challe National Park and the desert flora begins.

Public buses do not serve Llanos de Challe although some tours operate. You can arrange these on the ground from the closest towns: Huasco, Vallenar, Caldera, La Serena, and Copiapó.Atacamensis and Go Chileschedule tours when the petals emerge. If the botanical wonderland continues to blossom, the provision of tours may well “bloom” as local authorities aim to reduce carbon emissions.

One option is to pitch a tent – or park your motorhome – at Playa Blanca Llanos Del Challe. Sited directly on the powdery white beach next to the warden’s station, the campsite is basic but there’s tons of space and the potential for stargazing is unreal. Restrooms are available while hot showers are dependent on the solar panel. Contact details are published on the Corporación Nacional Forestal (CONAF) website.

Otherwise, you can take your pick from hotels and Airbnbs in those border towns mentioned previously. This two-bedroom condo in Huasco overlooks the Pacific Ocean and the desert. Vallenar’s Hotel Puerto de Vega comes with creature comforts and a pool while Krreteros Restobar in Plaza de Armas is recommended for a bite or a beer.

A sky full of stars

Once you’ve dusted off the sand, don’t miss the opportunity to explore the lower portion of the Atacama Desert near the Llanos de Challe National Park. Each of the gateway towns mentioned above is worthy of a visit or you can tap on a visit to the Elqui Valley. Besides producing the Chilean national spirit, pisco, and a percentage of Chile’s leading wines, this lush region is the country’s capital for astrotourism.