Ireland is often called the land of saints and scholars. Without a doubt, the most famous among these is St. Patrick, or Naomh Pádraig to give him his Irish name.

A lot of mythology surrounds Ireland’s best-known saint and first bishop. For one, he probably didn’t banish the snakes from the Emerald Isle. For another, he definitely never dyed a pint of beer green in his life.

But something we know is that in the fourth century, St. Patrick worked, lived, and was buried in County Down, Northern Ireland. Although a lesser-known part of Northern Ireland, the county is a great starting point to learn more about the most famous character in Irish culture and the myths and legends that surround him. 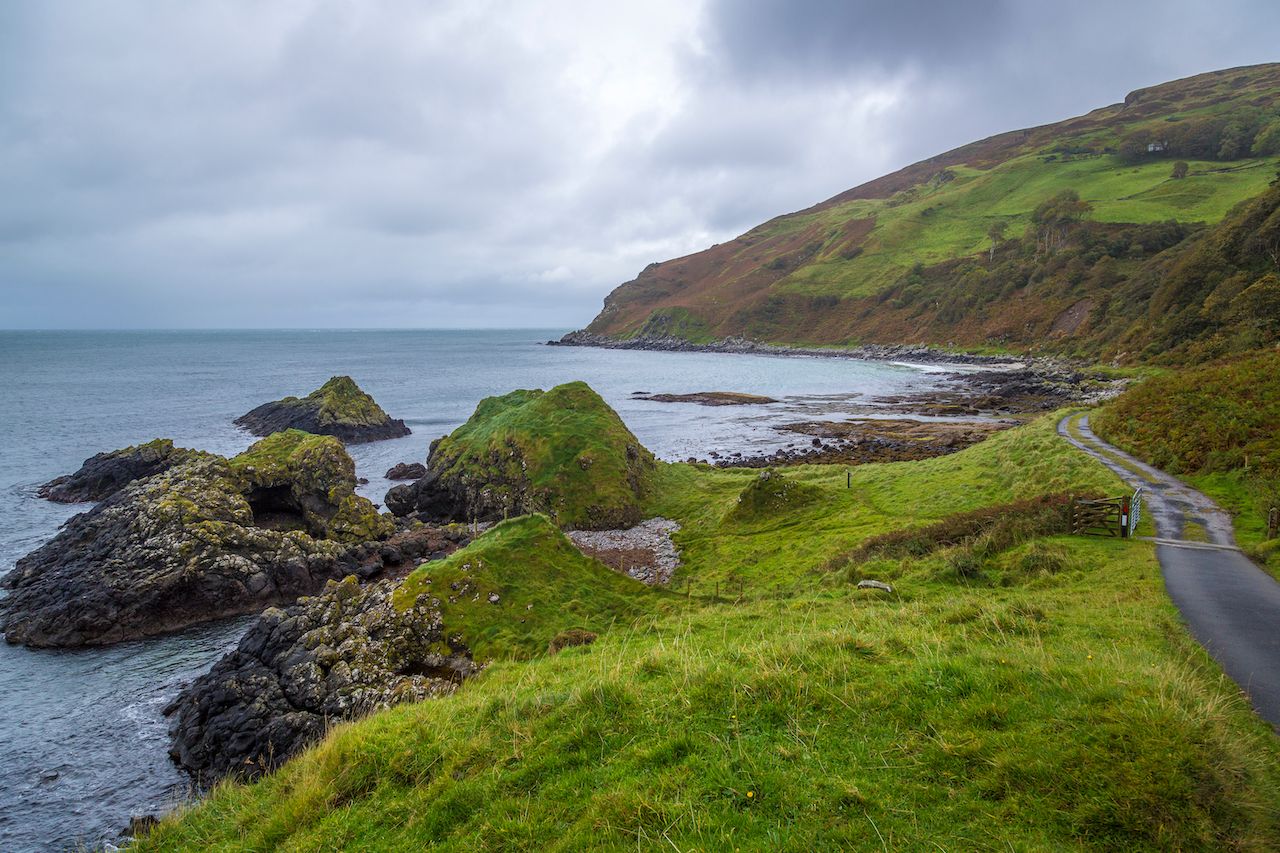 St. Patrick’s Way is an 82-mile walk, which takes in some of Co. Down and neighboring Co. Armagh’s most important religious, industrial, and rural history. While originally a pilgrimage, today the St. Patrick’s Way is more often enjoyed as a secular hike.

One of the St. Patrick’s Way’s top-selling points is the diverse range of landscapes and indigenous wildlife that hikers are able to see. In just a few days, you’ll move through urban, mountainous, forested, and coastal settings. 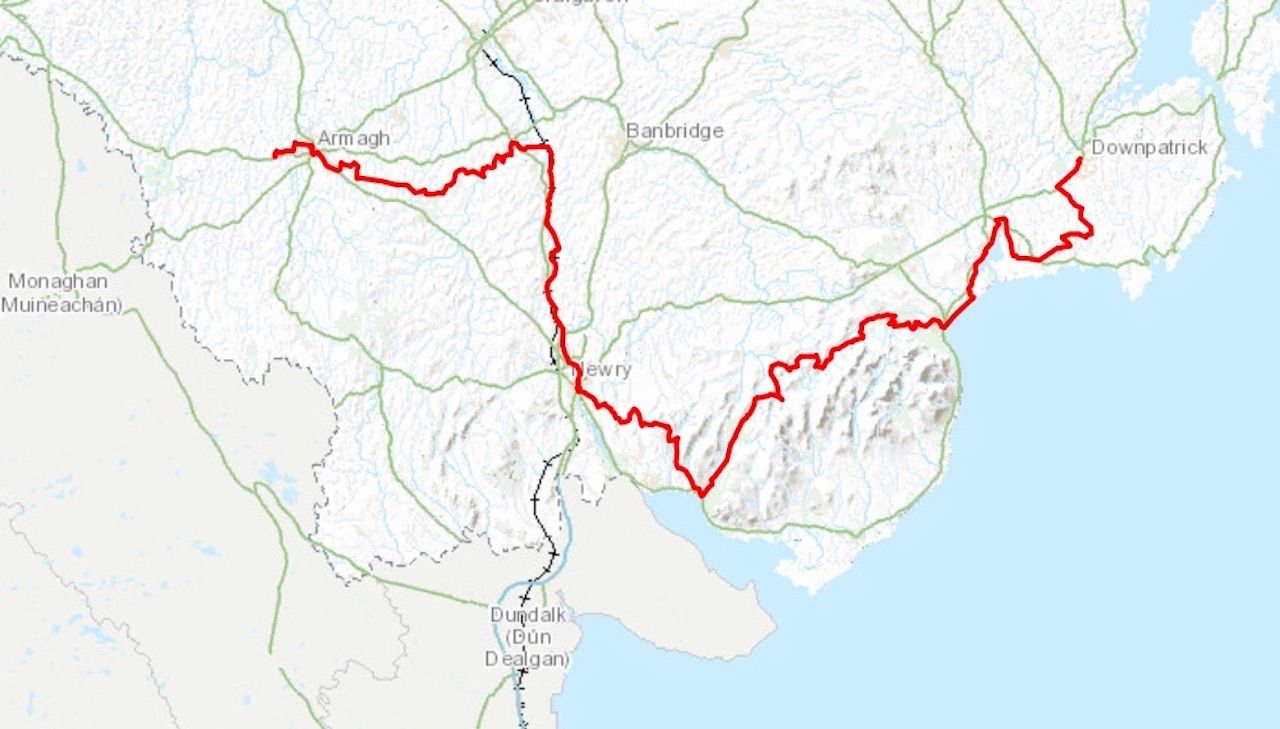 The first part of the route joins the cities of Armagh and Newry via a repurposed canal towpath. The rest of the sign-posted walk then comprises a jaunt through the Mourne Mountains, before traveling through the Murlough Bay nature reserve, and eventually up the coast to Downpatrick.

To get the full experience, we recommend picking up the Pilgrim’s Passport from the starting point at the Navan Centre, outside Armagh. This can be stamped at 10 points along the route. If you collect all 10 stamps, you’ll receive a certificate of completion from the St. Patrick Centre.

We recommend at least six days to get the full experience. Multiple hotels and B&Bs are available in the major towns along the route. 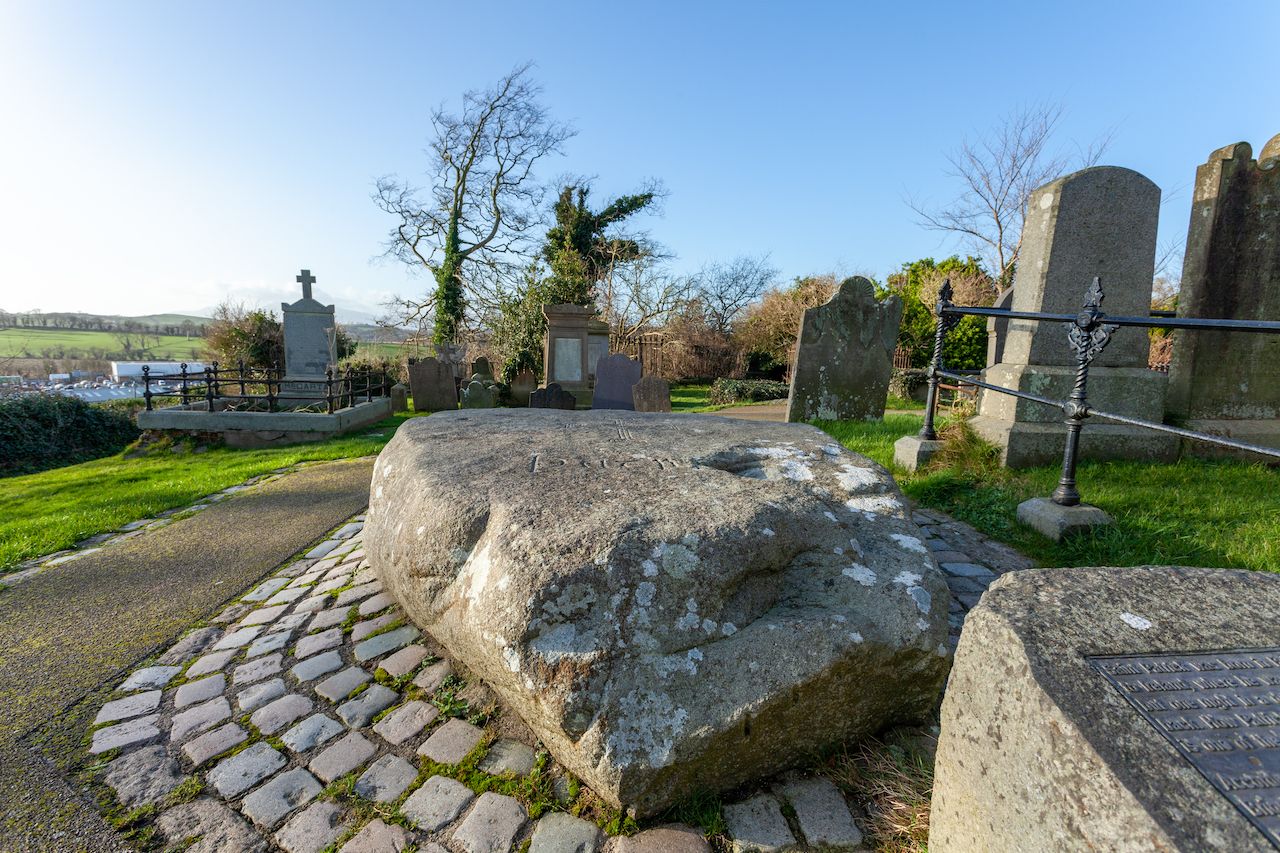 While it’s hard to know for sure, it’s widely accepted that St. Patrick lived and worked in Northern Ireland from around 433 AD and that he eventually died in what’s now the town of Downpatrick in 461 AD.

He’s buried in Downpatrick, on the grounds of an 11th-century monastery, alongside Ireland’s other two patron saints, Brigid and Columba. According to legend, the three saints were buried together in the 13th century, fulfilling a prophecy that Ireland’s three patron saints would find the same eternal resting place.

Since 1818, a cathedral has stood on the same spot. The current memorial to Patrick, a large unadorned granite slab, was placed there in 1900.

Naturally, the gravesite is one of great religious significance. It’s also the perfect place for a moment of quiet reflection and a great reminder of our connections to the distant past. 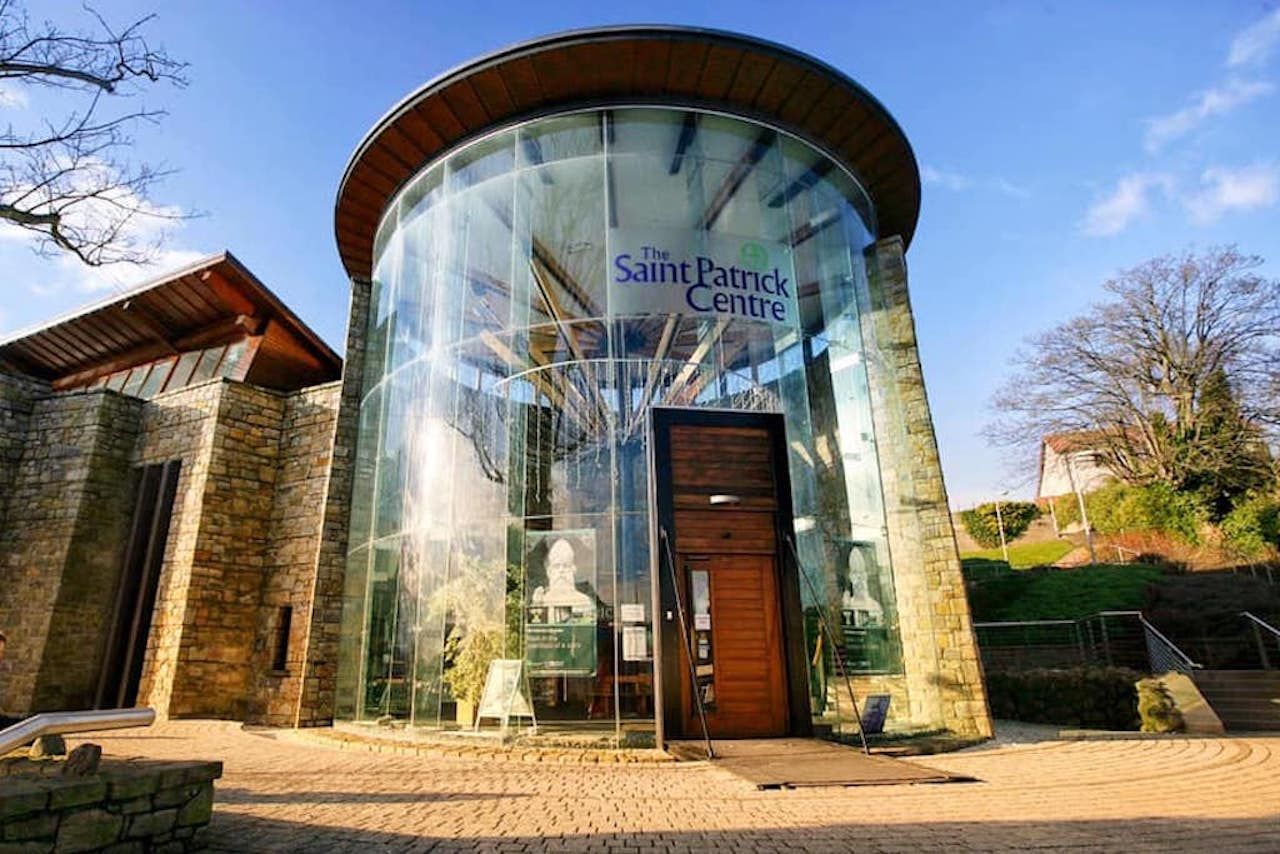 Only a few minutes’ walk away from St. Patrick’s gravesite is the Saint Patrick Centre. As well as being the only permanent exhibition to Patrick in the world, the center offers a fantastic insight into Ireland’s Celtic history.

The Garden Cafe also offers outdoor dining in the peace of the center’s enclosed rear. 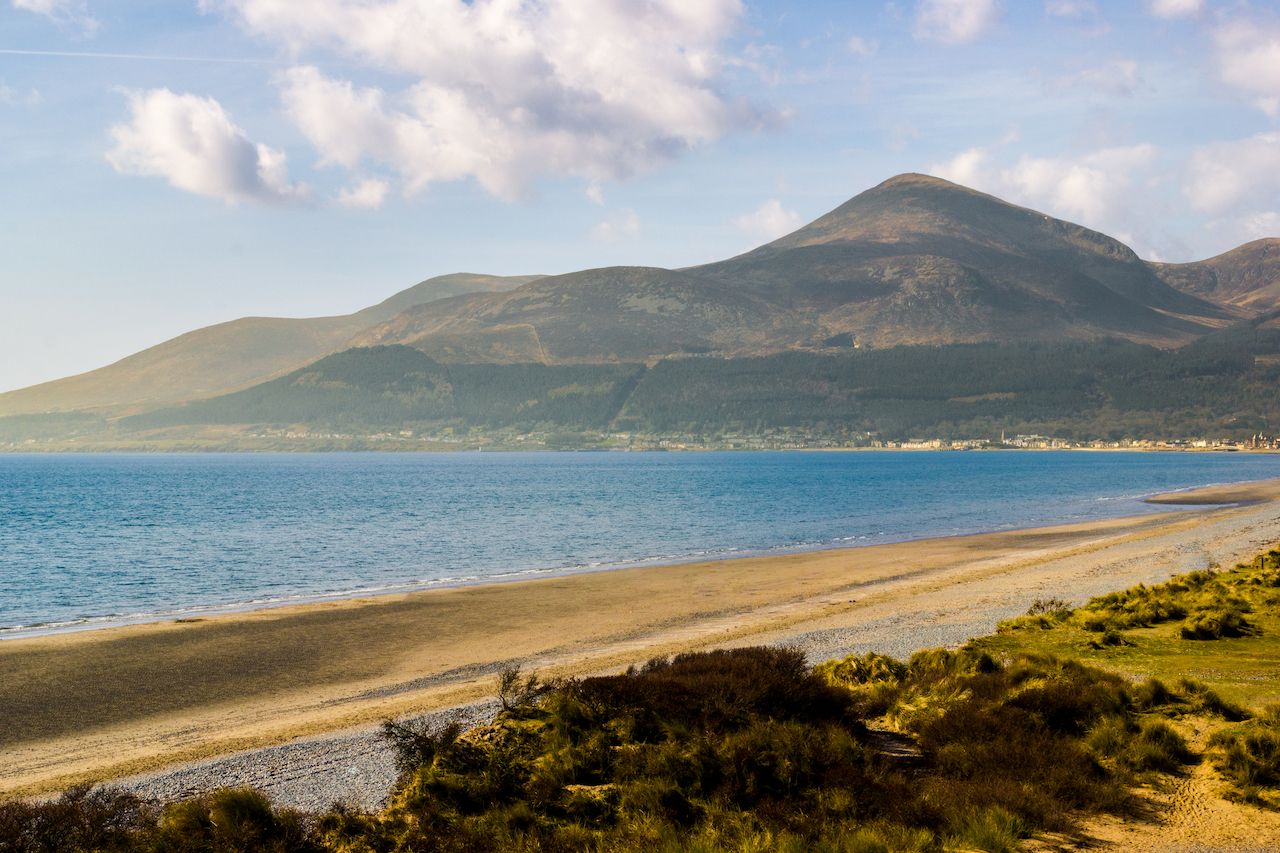 Like many fishing villages, Newcastle became a popular Victorian holiday resort in the 19th century. Then, as today, one of the primary draws was the combination of sandy beaches and views of the nearby Mourne Mountains.

Newcastle is also popular for its seafront promenade, which was refurbished in 2007. Along the seafront, you’ll also find some of Northern Ireland’s best independent and artisan shops, including Painted Earth handmade jewelers and the Cookie Jar Bakery, where you’ll find the best wheaten bread there is in this part of the world. 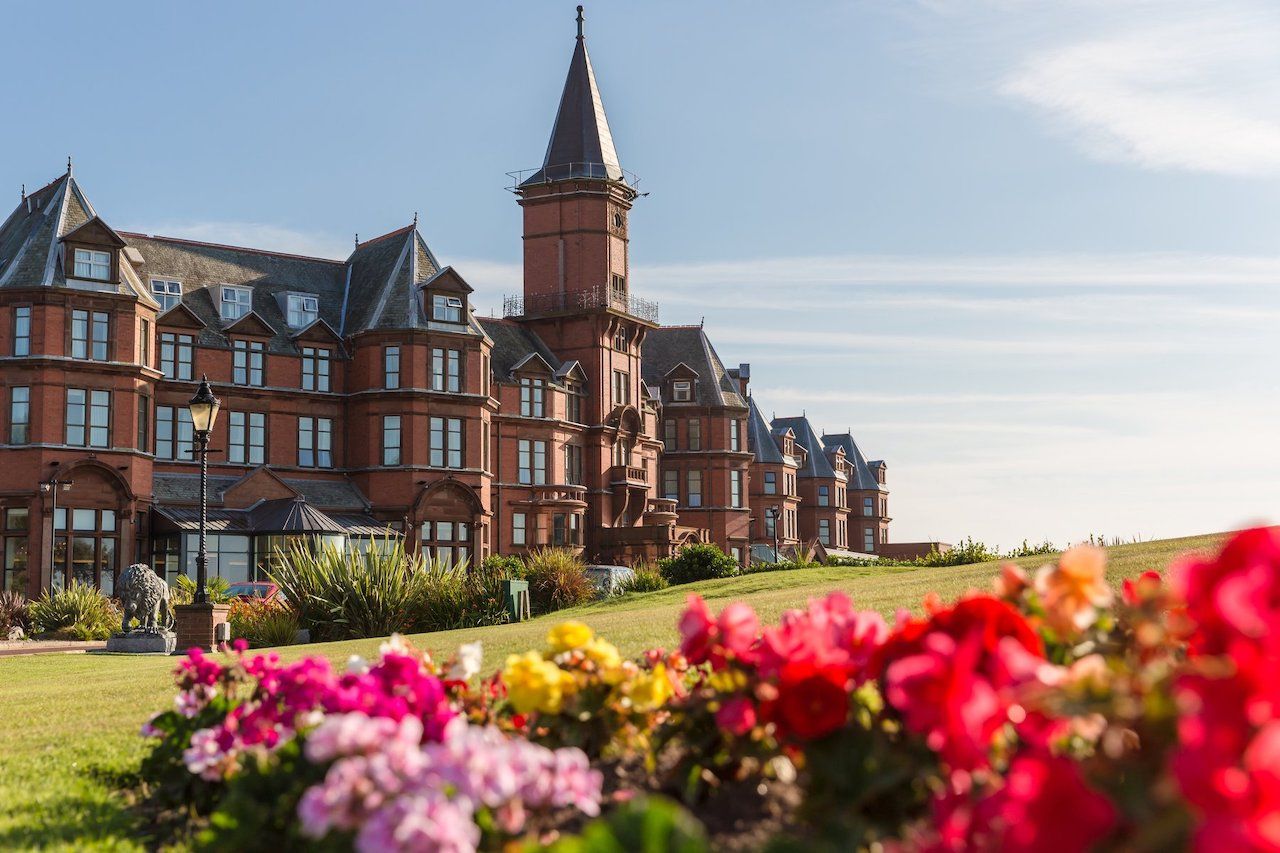 Newcastle punches well above its weight in plenty of other ways too. It’s the home of Royal County Down Golf Club, which was founded all the way back in 1898. In 2020, Royal County Down was even named the second-best golf club in the world.

Just outside Newcastle is one of the finest examples of late-Victorian red-brick architecture in the grandiose turrets of the Slieve Donard Hotel. The hotel itself stands on six acres of open grounds, including a long stretch of private beach. 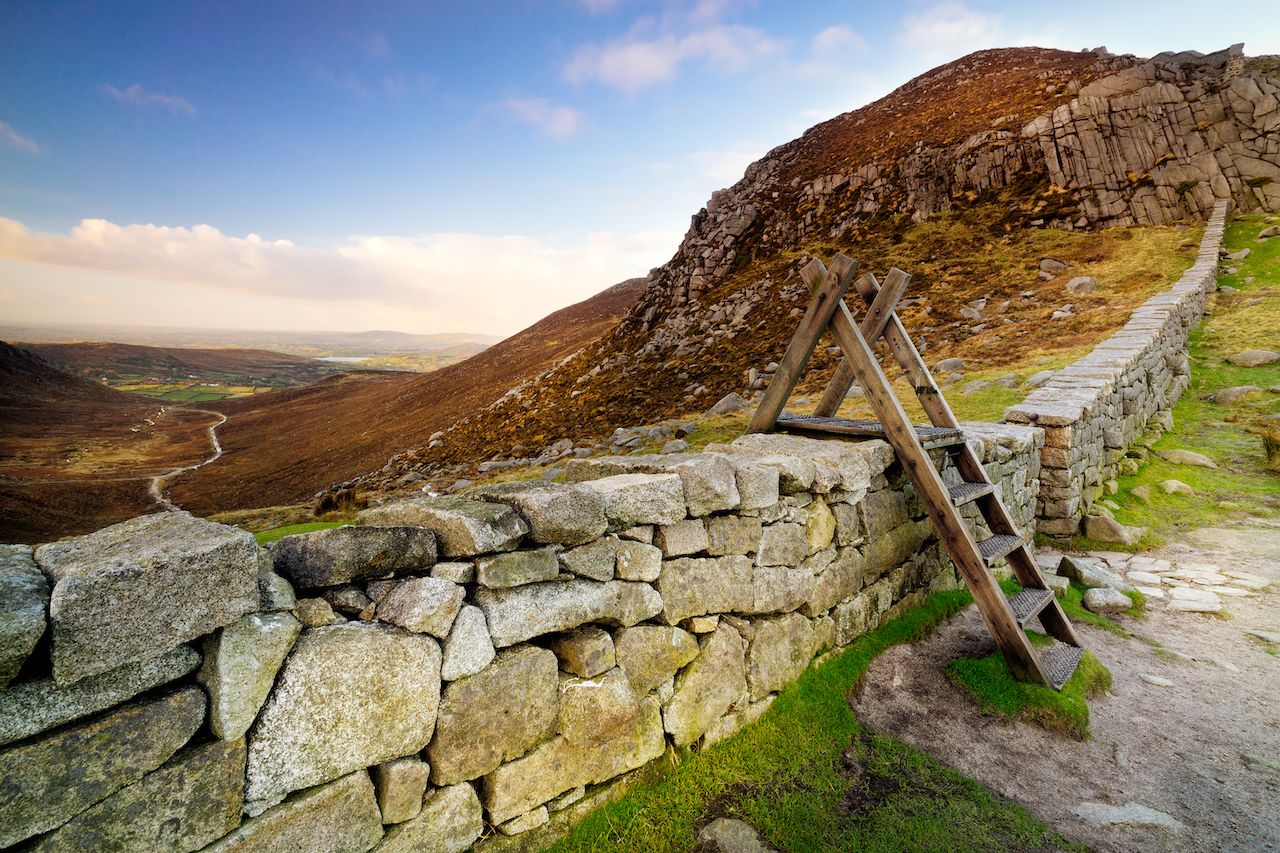 Northern Ireland’s famous and popular mountain range, the Mournes are accessible by foot from Newcastle. The Mournes are an area of outstanding natural beauty, and reportedly inspired certain elements of C.S. Lewis’ Narnia.

They even get a mention in John Lennon’s 1972 song The Luck of the Irish.

While there are hundreds of documented routes in the Mournes, our recommendation is to follow the Mourne Wall, which was erected in the early 20th century by the local water authorities. The hand-built dry granite wall spans almost 20 miles and passes through 15 of the peaks.

For less experienced hill walkers, it’s best to use the wall for easy navigation but without committing to the full route. 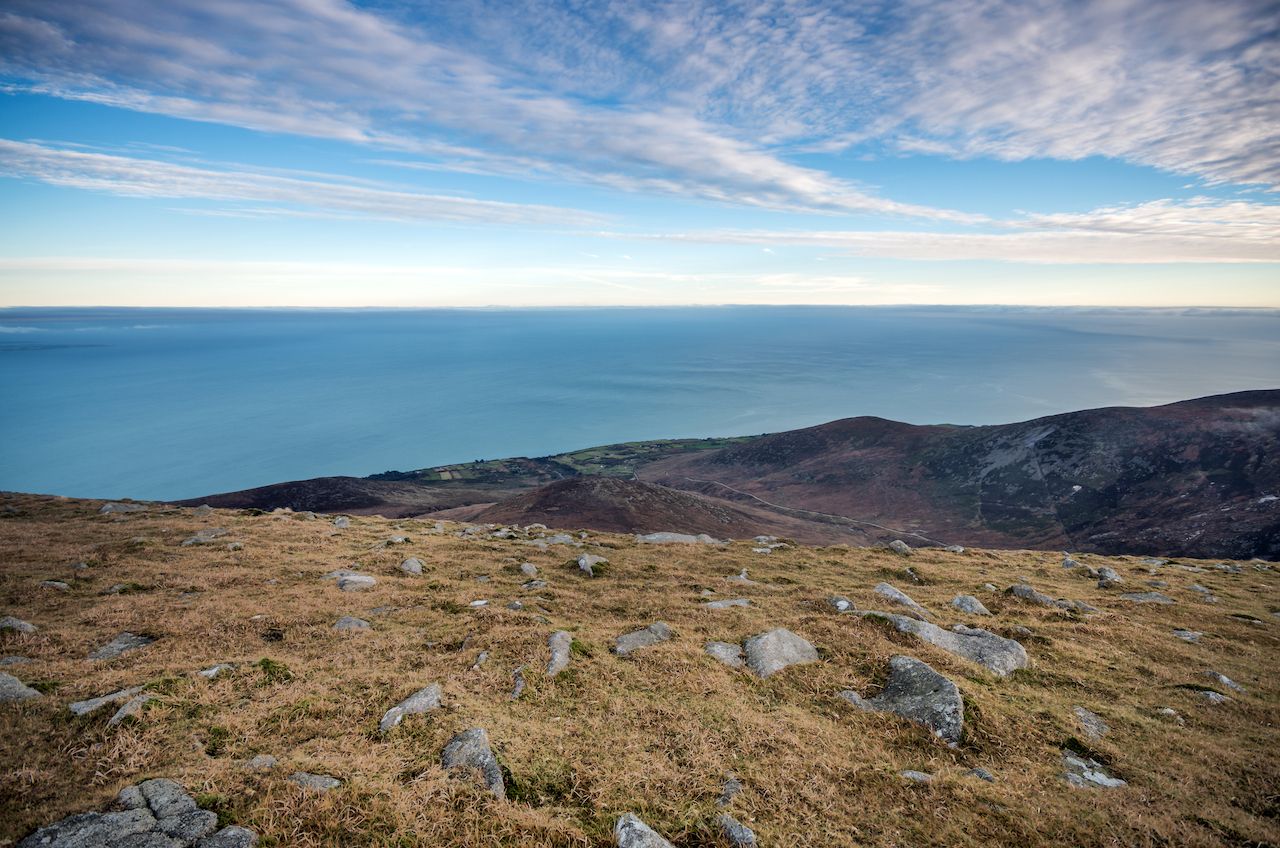 Many of the Mournes begin with slieve, an anglicized version of the Irish word for mountain. Among these is Northern Ireland’s highest peak, Slieve Donard, translatable as Saint Donard’s Mountain. Here, you’ll also find the highest passage tomb in Ireland.

On a clear day, you can see the Scottish coast, the Isle of Man, and the surrounding mountain ranges. 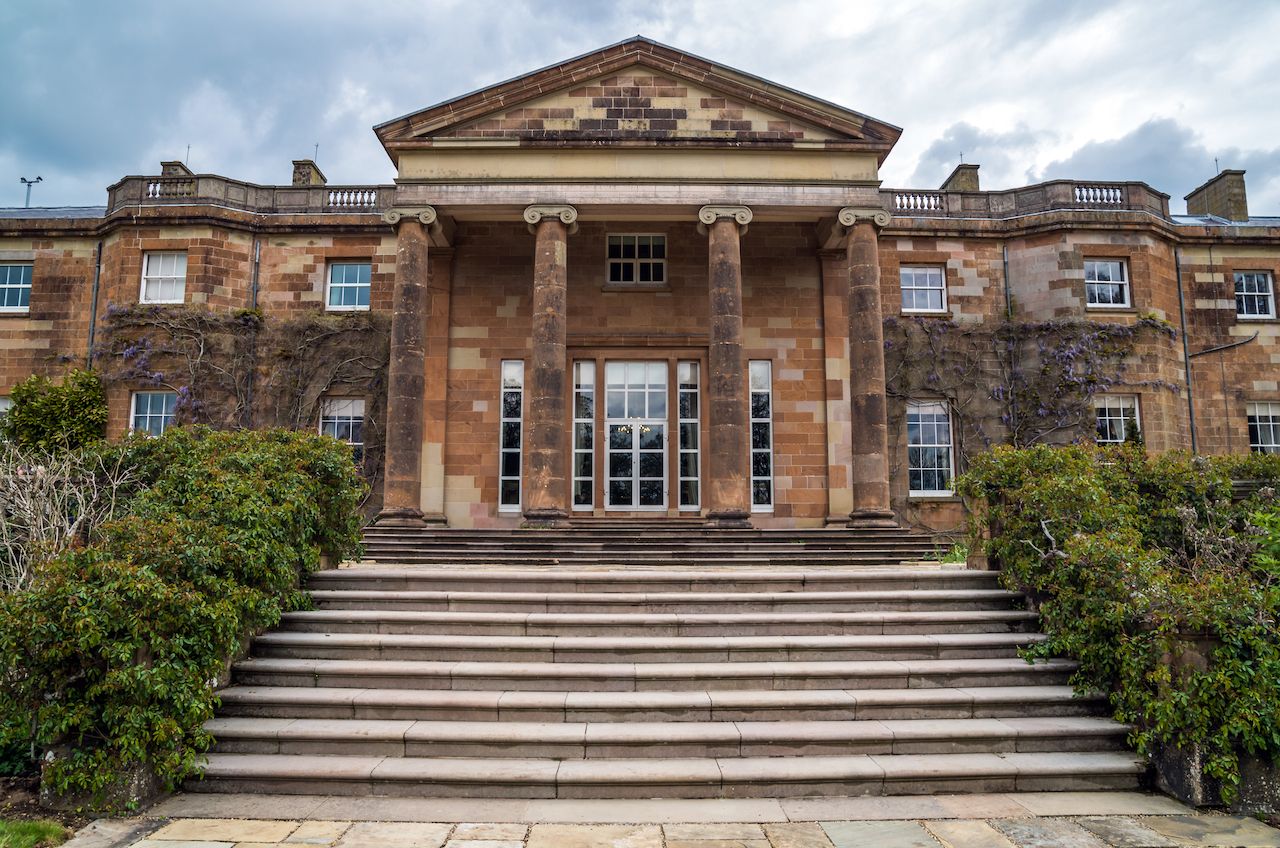 For a slightly less intense outdoor experience, head to Hillsborough Castle. The castle itself was previously the official home of the Governor of Northern Ireland but became the British Royal Family’s official residence in 1972 when that role was abolished.

The sandstone Castle itself was completed in the early 1770s by wealthy British plantationists. It stands on over 100 acres of manicured gardens, which are open to the public. Particular highlights are the famous Walled Garden and the recently re-discovered Lost Garden.

Since its completion, Hillsborough castle has also played a varied and important role in Irish, British, and international politics. All the way back in 1771, the castle’s original owner, Willis Hills, even hosted the American founding father Ben Franklin. Queen Elizabeth also celebrated part of her honeymoon in the castle in 1949.

During the bloody conflict in Northern Ireland in the second half of the 20th century, the castle was fitted with added security, including bullet proof glass, which inadvertently made it the ideal location to host the negotiations which eventually led to the Good Friday Agreement of 1998.

The current management of the castle and gardens offer bespoke political tours. 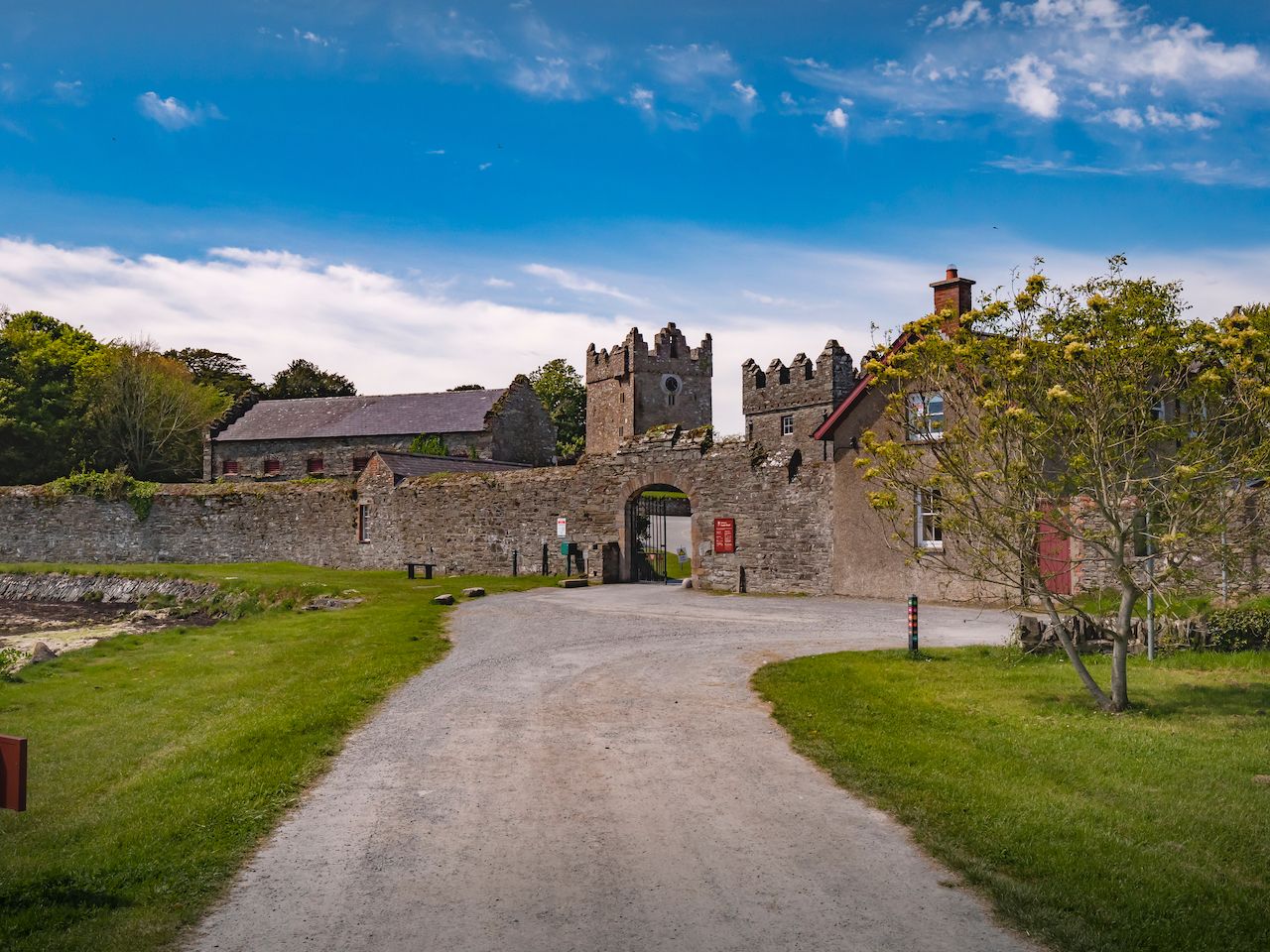 As a one-stop shop for enjoying Co. Down’s natural and manmade beauty, you’d be hard-pressed to beat the National Trust property, Castle Ward, which includes an 18th century mansion house.

The Castle Ward property also has 20 miles of walking trails, including routes along the front of nearby Strangford Lough. These are a particular highlight as in the warmer months you’ll be able to catch a glimpse of the local seals basking on the shore.

While Castle Ward’s history spans multiple centuries, today it’s probably most popular as a filming location for HBO’s Game of Thrones. Many of the outdoor Winterfell scenes were shot in the property’s stable yards. You can even dress up in costume from the show and try your hand at archery on a replica of the Winterfell Archery Range.

Hilarious ‘Derry Girls’ Now Have Their Own Derry Mural