With Halloween behind us, and jolly old St. Nick’s annual ride up ahead, it may seem like the creepiest thing we have left to contend with this year is the suspiciously innocent Elf on the Shelf. But according to European folklore, Christmas gets a whole lot scarier than rosy-cheeked dolls. Witches, demons, and a giant cat more terrifying than any character from A Nightmare Before Christmas feature in traditional tales from Iceland to Austria. Take note, superstitious types: These are the seven creepiest yuletide baddies to keep an eye out for this month. 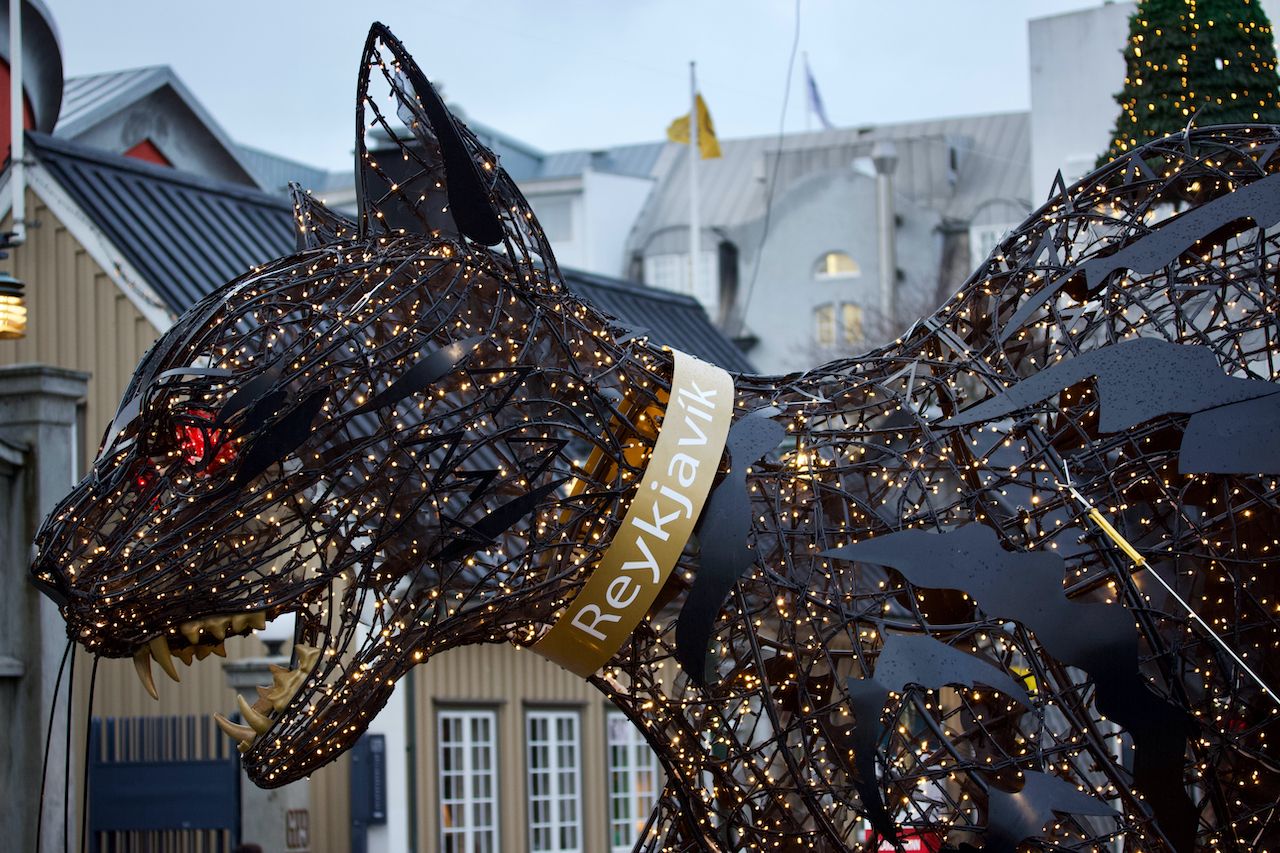 How we act throughout the year generally decides whether we make the naughty or nice list. Yet Iceland’s bloodthirsty Yule Cat bases its judgment on another criterion: wardrobe. The massive, murderous feline is said to patrol the snowy landscape in the days before Christmas, peering into windows and gobbling up children who haven’t received new clothes. According to Icelandic tradition, children who finished their chores on time were gifted new clothes to wear for Christmas. Lazy children were threatened with receiving nothing and having to face Jólakötturinn. To appease the people-eating Yule Cat, some Icelanders still give each other socks, mittens, and other warm clothing on Christmas.

2. Frau Perchta: The Christmas witch made famous by Jacob Grimm 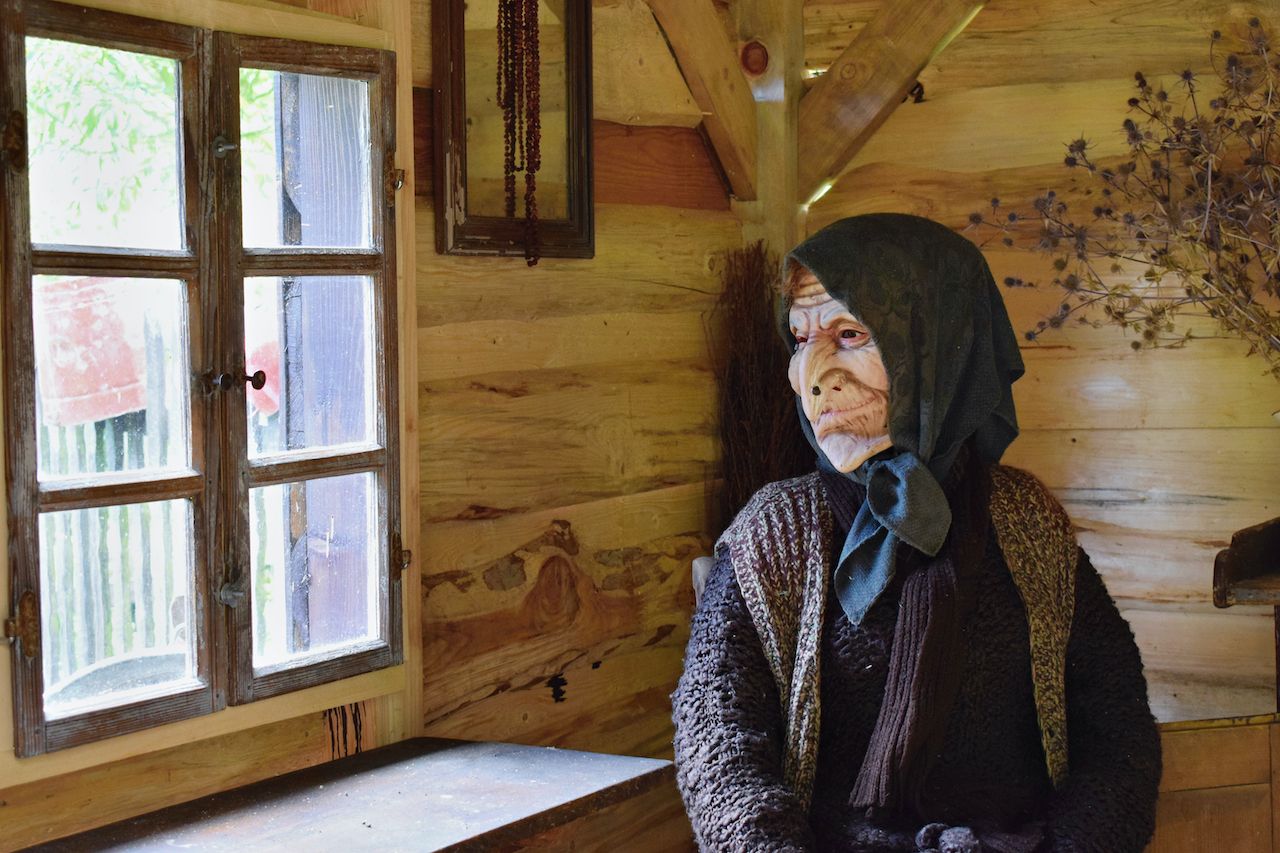 Many children grow up thinking that the worst thing they could wake up to Christmas morning is a lump of coal in their stocking. Those from southern Germany and Austria know better, however, having grown up with the tale of Frau Perchta. Perchta is said to prowl the Alps during the 12 days of Christmas. On the last night, the Eve of Epiphany, she creeps into homes to leave silver coins in good children’s shoes and slit the stomachs of the naughty, particularly the lazy. Adults included. She then replaces their insides with straw, stones, and waste.

Descriptions of Frau Perchta vary. Once believed to be a goddess, she’s been depicted as both tall and womanly and grotesque and demonic, with features like horns, an enlarged foot, and a beak-like nose. In some stories, she switches between the two forms. Jacob Grimm, of Brothers Grimm fame, popularized the legend of Frau Perchta in the 19th century, linking the figure back to 10th-century lore.

Hans Trapp is an evil spirit who haunts the forests of Alsace Lorraine. Trapp’s story is a cautionary tale about greed, as well as a good old-fashioned ghost story that’s come to be associated with Christmas on the French-German border. As it goes, Hans Trapp was a wealthy man whose cruelty and money-lust eventually got him excommunicated from the Catholic church, after which he became a disciple of Satan. Exiled to the forest, Trapp disguised himself as a scarecrow and began preying on young children. One day, about to devour one of his catches, legend has it that Trapp was struck by a bolt of lighting, a not-so-subtle sign from God, and killed on the spot. Unfortunately for the little ones of Alsace Lorraine, his restless soul is still said to roam the region every Christmas, looking for children to feast on.

4. Krampus: The half-goat, half-demon keeper of the naughty list 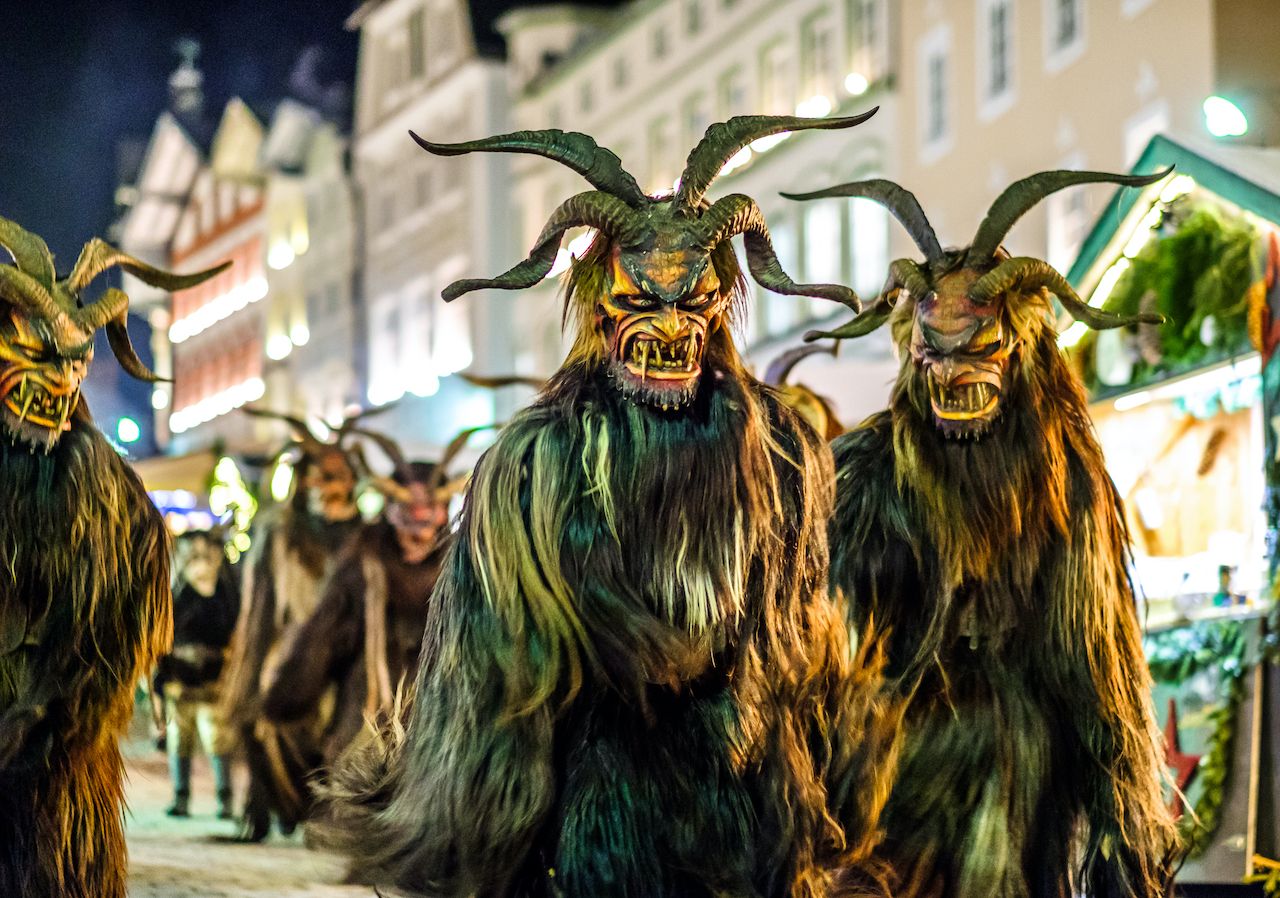 Santa Claus may be a far cry from St. Nicholas, but at least the patron saint of children on whom he’s based made it into the mainstream. Classic Christmas tales also speak of evil counterparts to gift-giving St. Nicholas who are said to punish naughty children.

One of the most famous anti-Santas, Krampus began its flirtation with the zeitgeist in 2015 after the surprisingly not-panned horror-comedy of the same name hit the big screen. The story dates much farther back, however, with roots in centuries-old pagan lore from Austria and Alpine Germany. Legend has it that Krampus comes to town every December 5 on the eve of the Feast of St. Nicholas, also known as Krampusnacht, or “Krampus Night.” In tamer tales, the hoofed, fanged demon leaves bundles of sticks in naughty children’s shoes. Other stories have the monster beat the children or even drag them to hell.

Some young men still get drunk, dress up in menacing masks, and run through the streets on a Krampuslauf, or “Krampus Run,” over the holidays. The whole thing started as a way to scare disobedient children straight, but we suspect it’s more about adults letting loose these days. 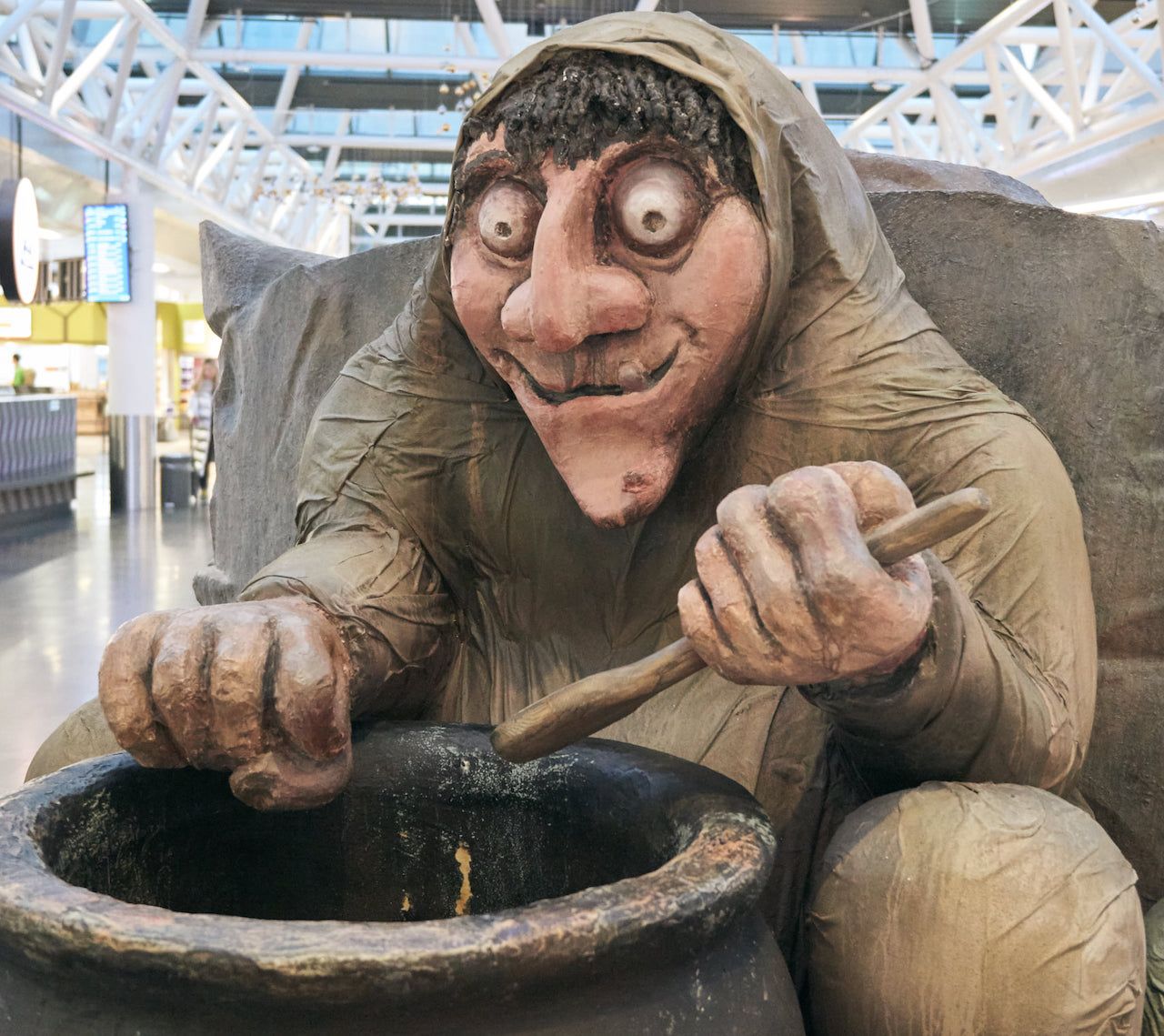 Iceland’s Yule Lads, or Jólasveinar, are a band of 13 folkloric fellows who visit children during the lead-up to Christmas. Like Krampus, they supposedly leave treats in the shoes of well-behaved children, distributing candies rather than coins. Troublemakers receive rotten potatoes in their place. Now depicted as relatively child-friendly trolls, the original Yule Lads were conceived of as terrifying monsters intended to scare children. Each has a name and mischievous specialty, from licking spoons to stealing sausages and slamming doors.

Even before being watered down in the interest of not scarring children for life, the Yule Lads were never the most frightening part of their own lore. That title belongs to Grýla, their mother and Iceland’s notorious Christmas witch. Early Icelanders believed that the mid-winter holiday that predated Christmas was a time when supernatural creatures roamed the human realm. Among them was cave-dwelling Grýla who was notorious for stuffing naughty children into her sack, bringing them back to her lair, and cooking them up in her cauldron. In some accounts, her husband, a troll named Leppalúði, joins her in the hunt.

Though Grýla’s story was not originally associated with Christmas, she’s come to be regarded as the mother of Iceland’s creepy Christmas family, which includes the Yule Lads and Yule Cat. A large sculpture of Grýla is currently displayed at Keflavik airport, and you can jump into her pot for terrifying photo-op.

Mari Lwyd is a Welsh custom with pagan roots that got swept up in Christmas and New Year’s festivities in South Wales and beyond. Traditionally, the practice involved wassailers going door to door carrying a horse skull mounted to a stick, draped in a white sheet, and decorated with ribbons, bells, and baubles. The skeleton-helmed procession sang ditties on every doorstep, demanding entry into people’s homes. Residents were challenged to retort with rhyming comebacks in a back-and-forth exchange called pwnco. After the battle of wits, the Mari Lywd procession was allowed in for drinks and snacks, and sometimes farewell songs were exchanged before the troupe continued on. It’s a lighthearted custom at its core, but the Mari Lwyd horse-spirit is one of the creepier Christmas figures out there.

Belsnickel is a character from German folklore, primarily featured in stories from the Palatinate region, but the legend carried over and grew with the Pennsylvania Dutch. Dwight Schrute introduced the figure to American audiences on The Office, dressing up as the fur-wearing, stick-carrying curmudgeon with a coal-smeared face in the Christmas episode of season nine. Though Belsnickel doles out both presents and punishments, he’s most famous for scaring naughty kids into behaving before Christmas. Said to appear a week or two before Christmas Day, he goes around beating insolent children to whip them into shape for his wholesome companion, St. Nicholas. Belsnickel bears some resemblance to an earlier German figure called Knecht Ruprecht who also accompanied St. Nicholas and threatened unruly kids.

Holidays9 of the Most Beautiful Christmas Trees From Around the World
Tagged
Holidays Religion
What did you think of this story?
Meh
Good
Awesome