The Mediterranean’s Ionian and Adriatic seas lap against the rugged coastlines and pristine beaches of southern Italy’s Puglia region, an under-tracked stretch of land occupying the narrow heel of Italy’s boot. Puglia’s lush landscape belies an ancient history of pirates and gladiators, and ingredients sprout in every direction (even on cliff-sides and cracks in the road!) that come together in unforgettable dishes. It has cliffs carved into ethereal rock formations, pale sandy beaches, glistening turquoise water, and a chill, authentic vibe.

There is no better way to explore the Puglia region, also known as Apulia or Salento, than circumnavigating it on two wheels. Since the area is frequented mostly in July and August by Italian holidaymakers, fall is the prime time to visit. It’s also a cooler season to embark on this lovely four-day cycling loop of the heel — which begins and ends in the city of Lecce, on the eastern coast of the heel.

Where to pick up gear and start your tour 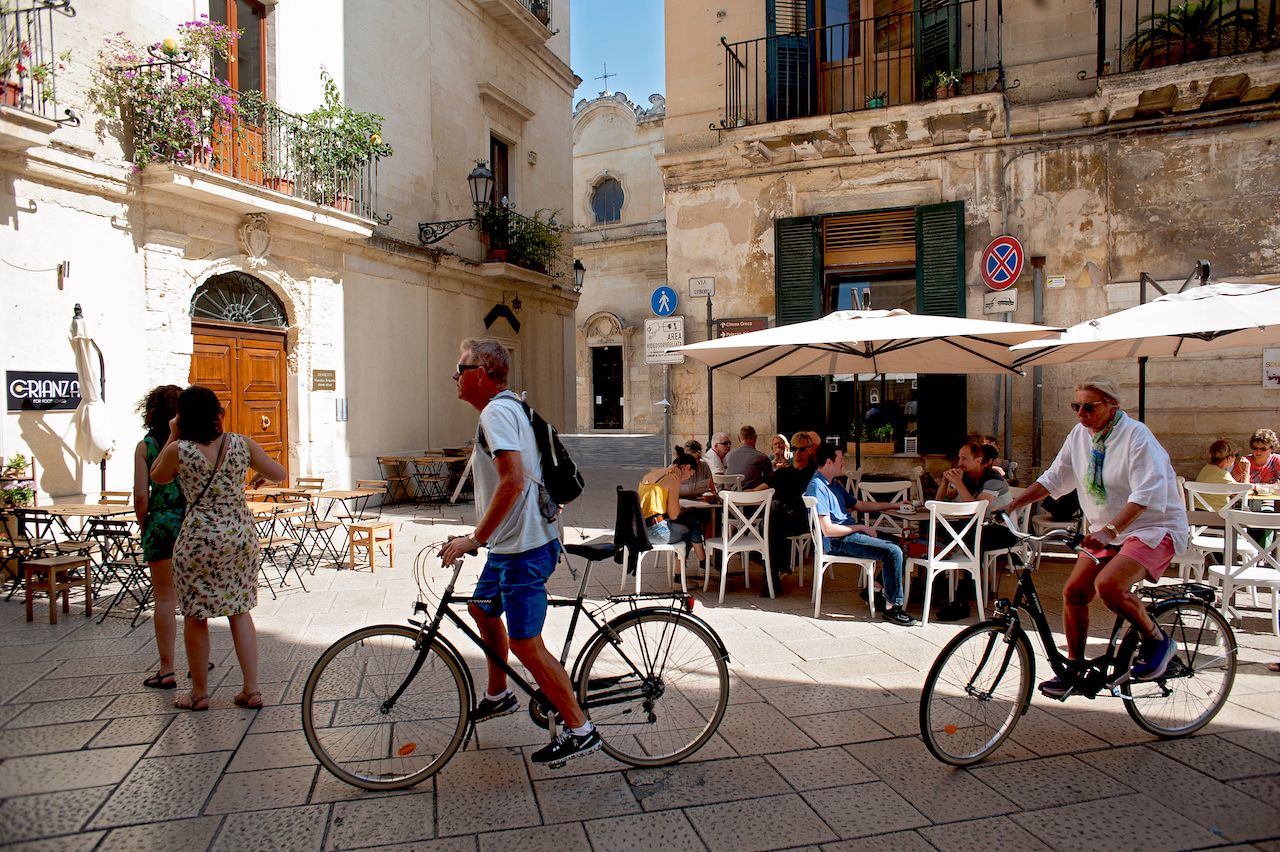 To have the full experience in Puglia, book the Apulia Short Break Tour, which includes five nights of lodging and airport transfers, as well as breakfast each day, without sacrificing the freedom of a self-led tour. These thoughtfully planned trips from operator Girolibero also include bike rental, luggage transfers, maps, panniers, turn-by-turn directions, and a detailed guidebook. Expect to pay between $512 and $600 per person during low season, with prices increasing based largely on hotel rates during the summer’s peak travel season. Fly into either Bari or Brindisi, both of which can be reached from numerous major European cities. Puglia’s epicenter and the ideal starting point of the four-day loop ride is the historic city of Lecce, a 30-minute drive from Brindisi.

A small city of around 800,000 inhabitants, Lecce looks a little rough around the edges. Outside the center, you’ll find graffiti scrawled on underpasses, drab-looking apartments, and a smattering of dilapidated buildings. However, it’s gorgeous at its core. Surrounded by an ancient stone fortress, Lecce’s old town is a labyrinth of ornately detailed Baroque buildings and churches with lively open squares dotted by artists at work. (Look for the Sudanese guy making and selling super cool and colorful, centerpiece-sized bicycles made from aluminum cans).

Like the entire Puglia region, Lecce is surprisingly affordable. You can find fantastic local wine and delicious, simple cuisine ranging from steaming thin-crust pizzas to handmade pasta and fresh seafood. Also, amid its boutique shops selling leather handbags, footwear, and handcrafted ceramics lies a relatively recently unearthed Roman Amphitheater dating back to the first century AD. The 25,000-capacity arena once served as the region’s entertainment hub, where warriors battled against wild animals and gladiators fought to the death.

Stage one: Lecce to Gallipoli 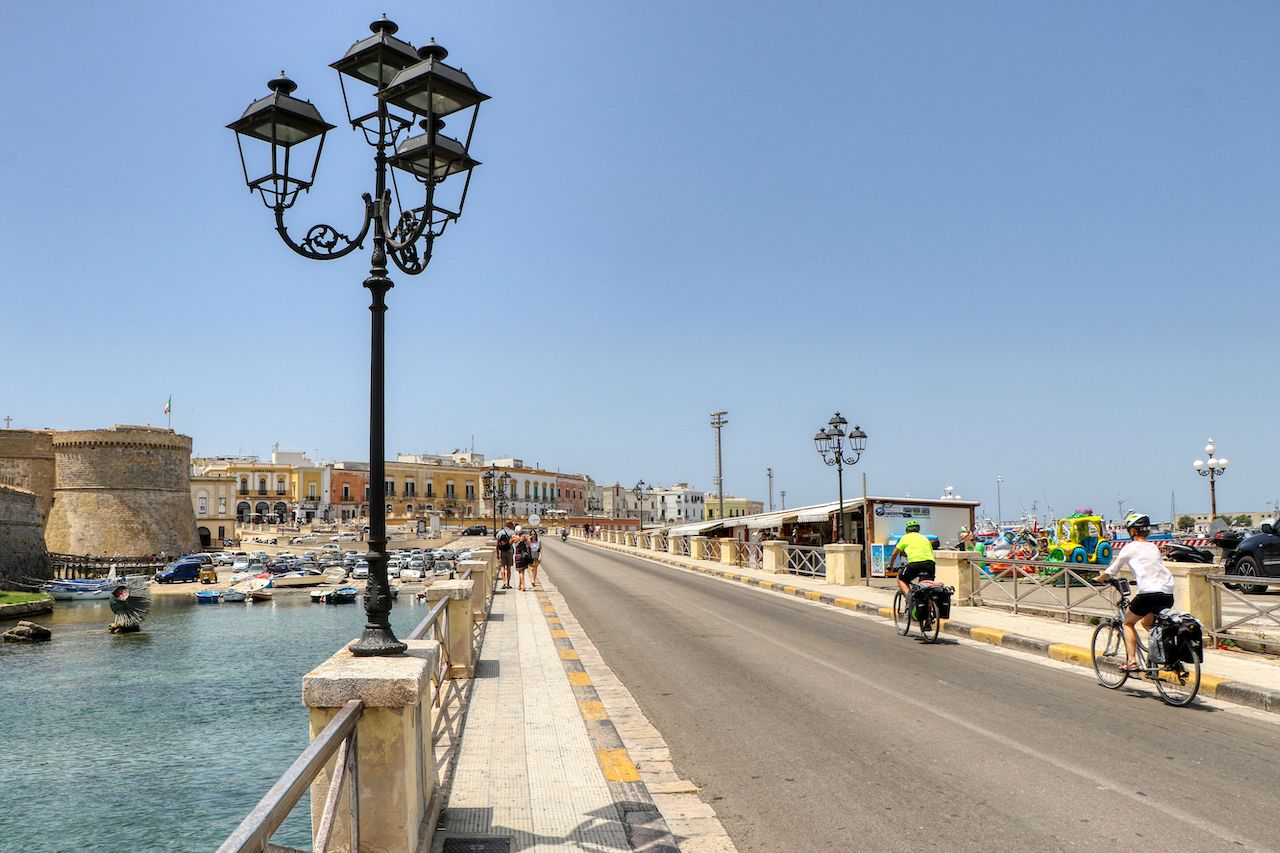 Pedaling out of Lecce, the chaos of the city falls quickly away to quiet country roads lined with wild red poppies and the occasional abandoned estate. You’ll cross overland from the eastern coast of the heel in a southwesterly direction towards Gallipoli, cycling through olive orchards and crop fields before passing through the town of Nardo and its Renaissance castle, palace, and fountains.

As you pedal up and over a mild gradient, the crystalline waters of the Ionian Sea unfold ahead. Soon the route to the ancient city of Gallipoli runs adjacent to the rugged coastline. Dating back to before the arrival of the Romans, Gallipoli’s fortressed old town juts into the sea from the end of the peninsula and is only accessed by a single, narrow road.

Its center is a Venice-like labyrinth of deep, narrow, cobblestone passageways and streets leading to colorful squares, boutiques, and restaurants. Tucked onto a quiet street is dinner gem D’Angolo Blu, where daily fresh seafood options like redfish, sea bass, and monkfish are brought to the table and prepared to order. 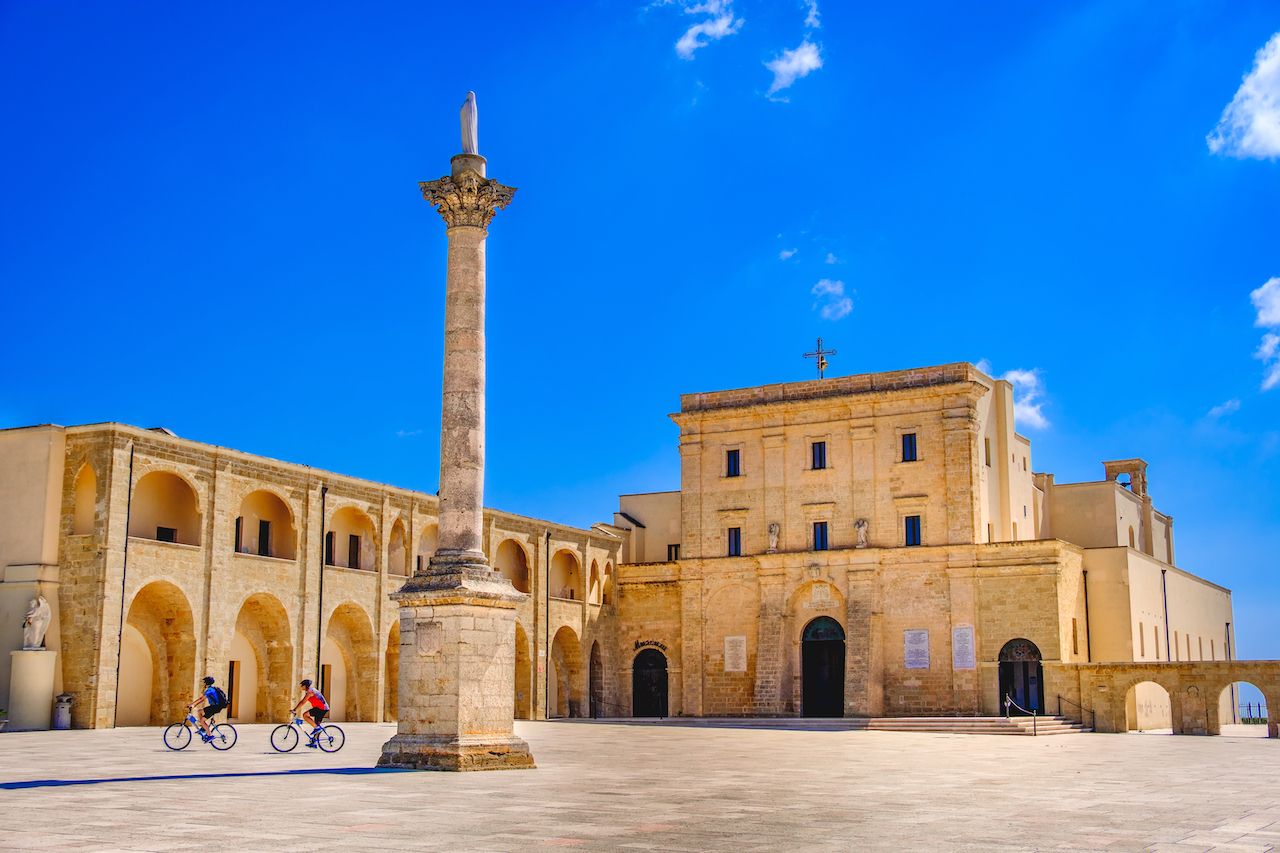 From Gallipoli, day two of the bike route continues south down the coast, passing the stoic remains of 16th-century watchtowers that watched for Ottoman pirates and seemingly endless stretches of white sandy beach, eerily empty in the spring and fall months. In September and October, the clear, shallow, turquoise waters of La Spiaggia del Maldivo, Salento’s version of the Maldives, are delightfully mild and inviting, yet it will likely feel as though no one other than your group has accepted the invitation.

From here, the coastal road becomes slightly rolling, giving way to ancient caves and cliffs, all sprouting wild fennel and green onions. The day’s destination is Santa Maria di Leuca, a harbor town in the southernmost tip of Italy’s heel characterized by a mix of architecture ranging from a 300-foot-tall white lighthouse to a 2,000-year-old hilltop sanctuary, bright pink Neo-Gothic palaces, and the ruins of wooden Victorian bathing huts. 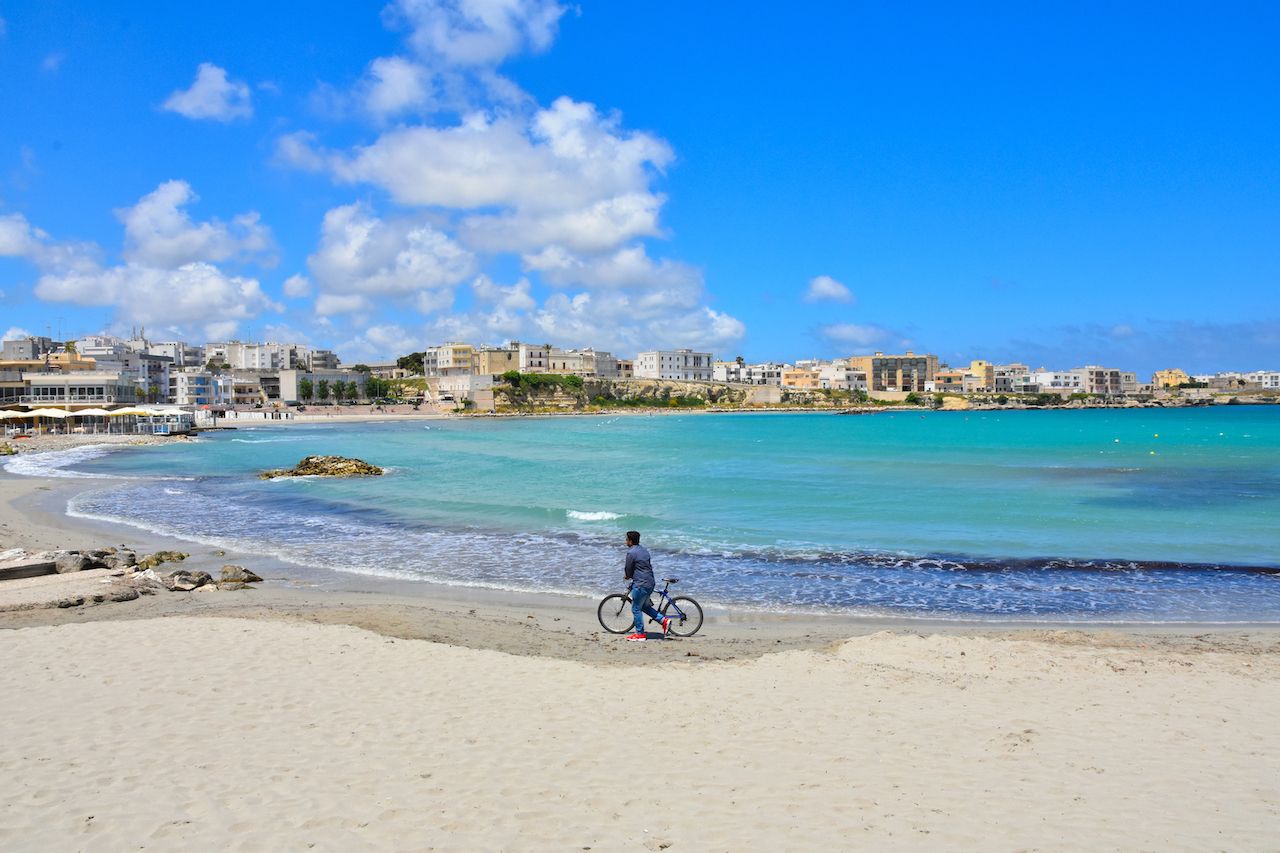 Day three takes you from Santa Maria di Leuca up the back of the heel to Otranto, a hilly journey on narrow roads hugging the cliffs with long, slogging climbs and fast, thrilling descents. The first of these takes you across Ciolo, a landmark bridge high above a narrow canyon lined with immaculate white stones above the aquamarine water. The rising and falling route is speckled with red poppies, as well as prickly pear and fig trees fresh for autumn picking. On this section of coast, the Ionian and Adriatic Seas meet. It’s the easternmost point of Italy, and on a clear day, the mountains of Albania are visible on the horizon.

Otranto is an attractive ancient town with a stunningly beautiful harbor, Aragonese Castle, and an 11th-century cathedral housing impressive mosaic floors and walls. Morbid curiosity will also lure you to the chapel filled with the bones of hundreds of locals killed by invading Turks in 1480. Otranto’s old town is accessed across a drawbridge through impressive fortress walls, and its center is abuzz with shops and restaurants, one of the tastiest of which is La Bella Idrusa, serving classic Italian fare such as eggplant parmigiana in scalding cast iron pots.

Stage four: Otranto back to Lecce 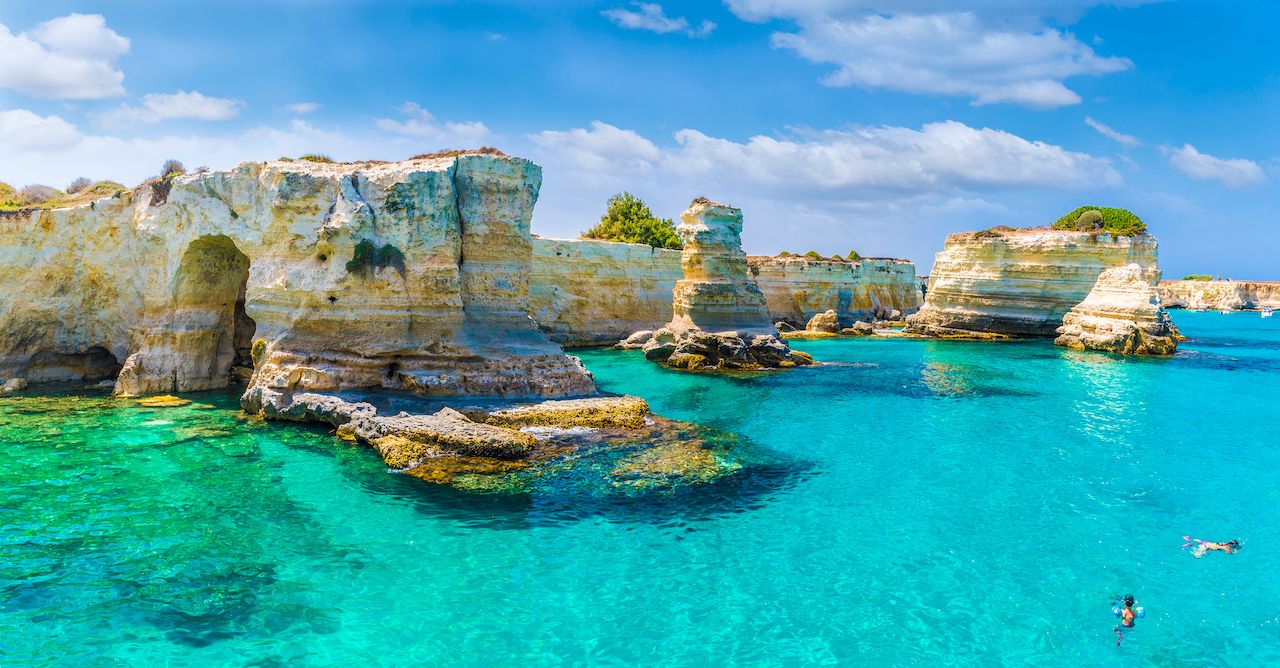 The fourth and final day of the ride returning to Lecce travels inland from Otranto through a foliage-rich nature reserve, between two bodies of water knowns as the Alimini Lakes — although one is saltwater and the other fresh. The route returns to the coast, at which point one of the most striking coastal views on the planet unfolds in the form of bizarre rock formations jutting out of the turquoise water at Sant’Andrea.

From here, the route meanders around a number of caves (grottos) and ruins of more anti-pirate watchtowers before crossing a wetland area and turning inland. Here, you’ll once again pass through sleepy olive orchards and the quiet but pretty Renaissance village of Acaya before re-entering urban civilization in Lecce.