Exploring a new destination on two wheels has a certain magical appeal.

Cycling can act as a bridge between the destination and the journey. It’s not the unromantic necessity of air travel, the convenience of car travel, or the free experience of a brisk hike – it’s more like a middle option. It’s a way to travel great distances while experiencing a destination first-hand, folding the highlights of a place into the romance of a journey (and yes, sometimes with a touch more chafing).

If you’re deciding where to go for a vacation on two wheels, few countries offer the options you’ll find while cycling in France. 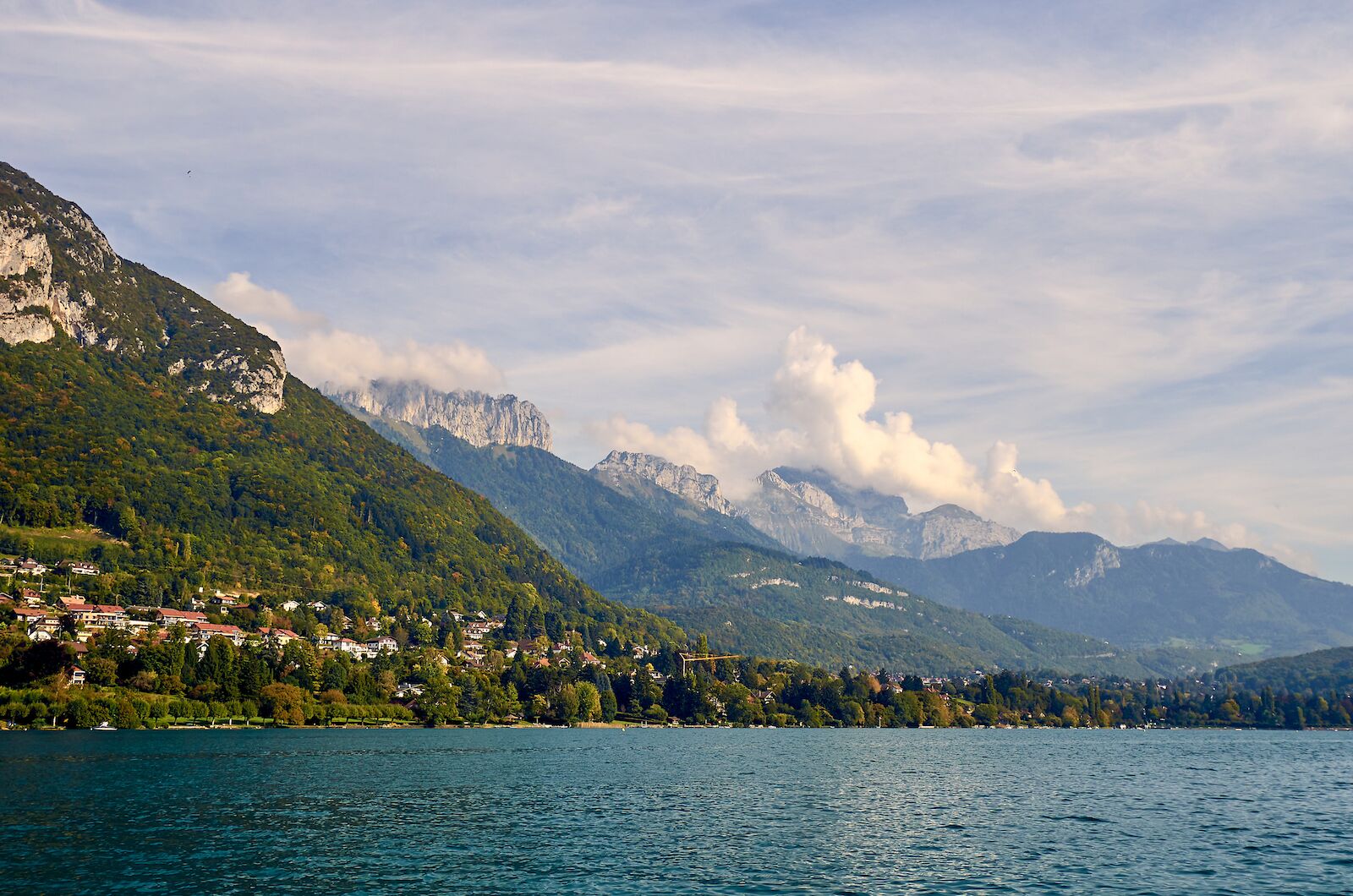 The best cities for cycling in France are charming old towns with historic buildings, and are near sprawling wine regions, lakes, and forested mountains. Many towns with a fondness and focus on sustainability have started developing cycle paths to enhance their eco-credibility, while new velo (bike) routes from tourism agencies promise to link the Alps to the Mediterranean via French towns and villages. The country offers stunning routes for a day trip or month-long ride — and you’ll find plenty of cafes and restaurants to stop for a quick cheese-and-wine refuel along the way.

These are the best towns to base yourself for cycling in France, from east to west. 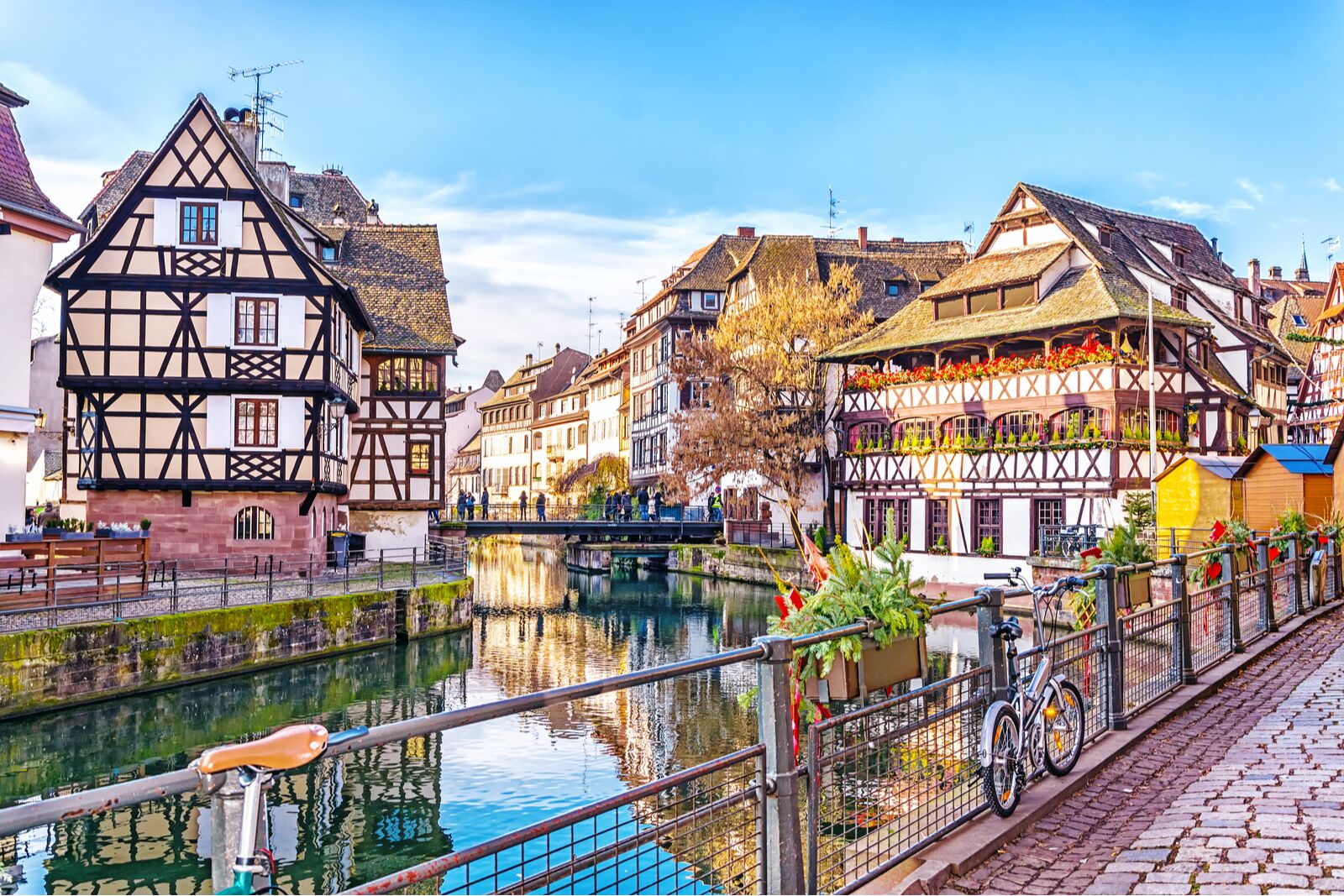 Strasbourg’s “Petite France” is a tiny jewel of a neighborhood with half-timbered houses surrounded by German Renaissance façades. Picture Art-Nouveau homes poking up behind iron gates laced with dense ivy.
But as a tourist destination, Strasbourg has become no more than a quick stop on European tours, with few people venturing farther than the tourist hub of the city’s Petite France.

But the city is one of the best starting points for cycling in France and has some of the country’s most beguiling architecture, with Romanesque churches and Renaissance schools lining tall boulevards. The leafy bike-friendly canals that divide the Grand Île are beautiful for pedaling. The city has well-signed bike paths serving much of the city, and the streets are very cycle-friendly.

For a 10.5-mile route, cycle from the train station to Petite France and along the banks of the River Ill to see the elegant garden greenery of the Parc de l’Orangerie (and its families of storks swooping over the tree line). You could then stop at the Quartier des XV neighborhood to see grand streets pulled high with elegant villas and embassies, then finish at the striking European Parliament and its buildings that reflect the confluence of the River Ill and Marne Rhine Canal. For an even longer ride, add a detour to Germany over the Pont de l’Europe (Bridge of Europe) where the German-French border divides the Rhine.

Strasbourg is a popular starting point for cycling the 15-mile Canal de la Bruche route from the city to the Alsace Vineyard cycle route through the country. The route rolls through greenways and roads with restricted car traffic, cutting through grape-scented vineyards and picturesque towns like Colmar, Mittelbergheim, and Beblenheim. It does grip the slopes of the Vosges Mountains, so expect some fairly challenging climbs.

Annecy and the lakeside Voie Verte 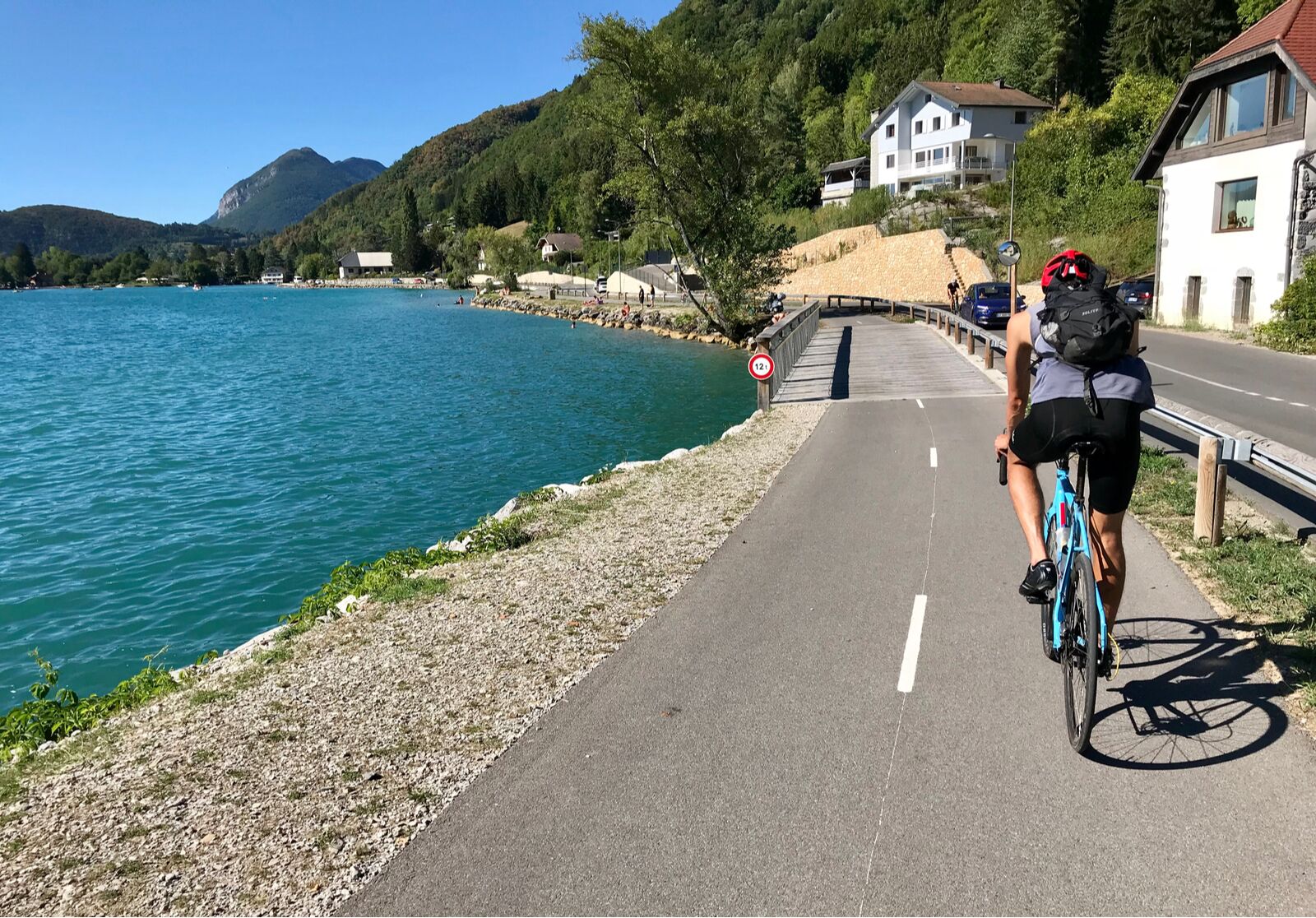 The uneven cobblestone streets of Annecy‘s pastel-shaded old town may seem like they lend themselves better to cheese tastings and browsing the weekly market than to cycling.

But stroll to the glacial blues of the lake and you’ll reach Annecy’s stunning greenway, the Voie Verte du Lac d’Annecy — the Lake Annecy Greenway. It’s a car-free cycle track along the shore of Lake Annecy. If you head around the lake in a counterclockwise direction, be sure to stop at Château de Duingt. You’ll reach it after seven or so miles and it’s an ideal place for a lakeside picnic on the grassy Plage du Château (the beach just outside the castle). If the beach is closed for a private event, don’t worry — most of the route is nearly as lovely.  If you don’t plan on the longer mountain route, the town of Sévrier (which you’ll have passed on the way to Duingt) is ideal for swimming or a quick hike before cycling back into Annecy. 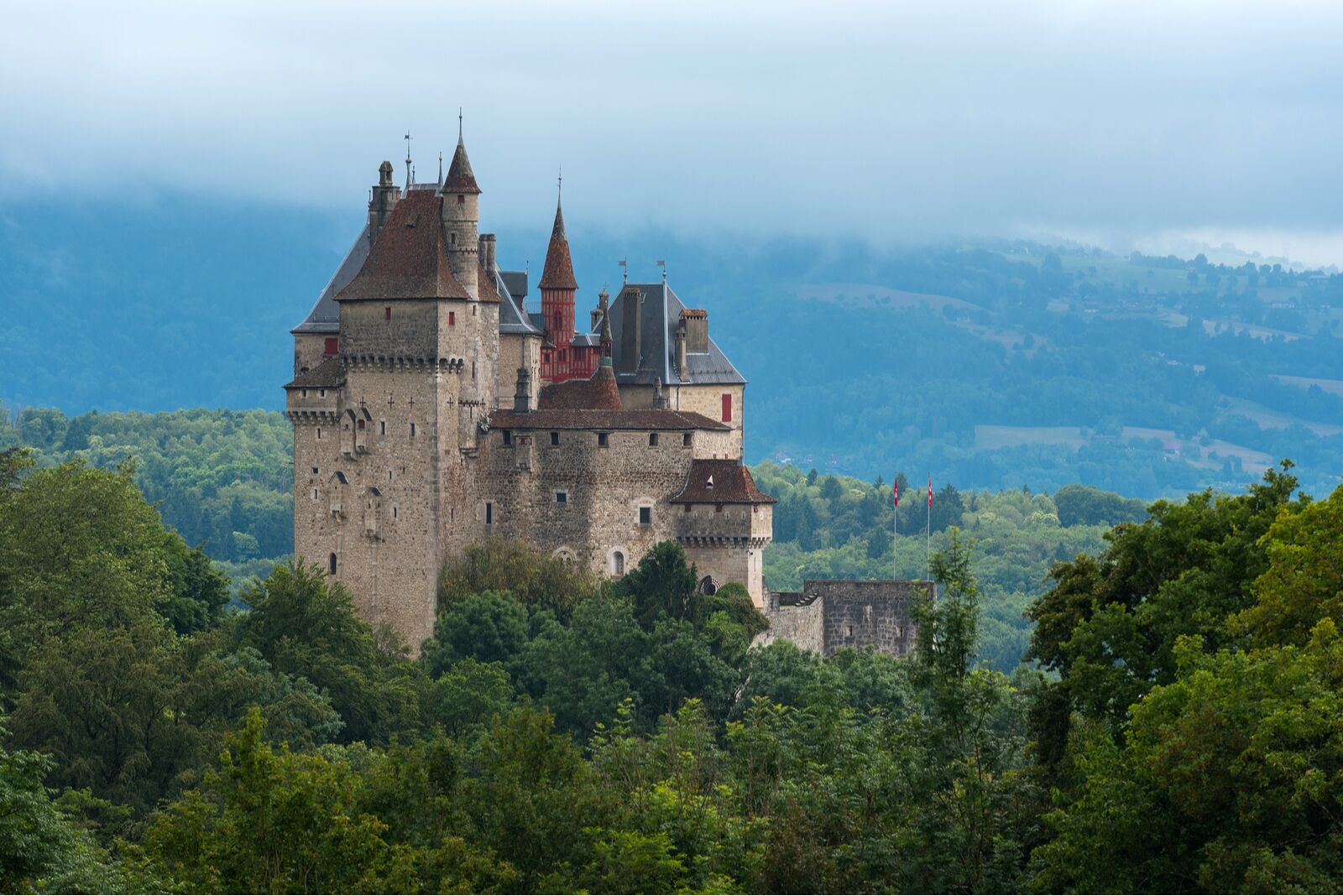 For a longer, circular route around the lake, stick with the greenway just beyond Duingt, where an old railway tunnel joins the road to the other side of the lake. Here, the family-friendly straights give way to mountainous peaks and hair raising descents, so the section is a bit more challenging. After around 18 miles, you’ll reach Menthon-Saint-Bernard, where you may want to make a stop at the Château de Menthon. It’s notable for its imposing gothic facade, tiled gables, and elegant mix of stone and wooden turrets that some people say was the inspiration for Sleeping Beauty’s castle at Disneyland.

From Menthon, the rest of the ride is an airy descent back to Annecy. Consider having a hearty dinner if you’ve ridden the full 26-mile lake loop. Annecy is well-known for a dish called tartiflette —  potatoes covered in gooey Reblochon cheese and topped with bacon. Pair it with a glass of local white wine or a dark fruity Mondeuse noir for a perfect alpine evening. 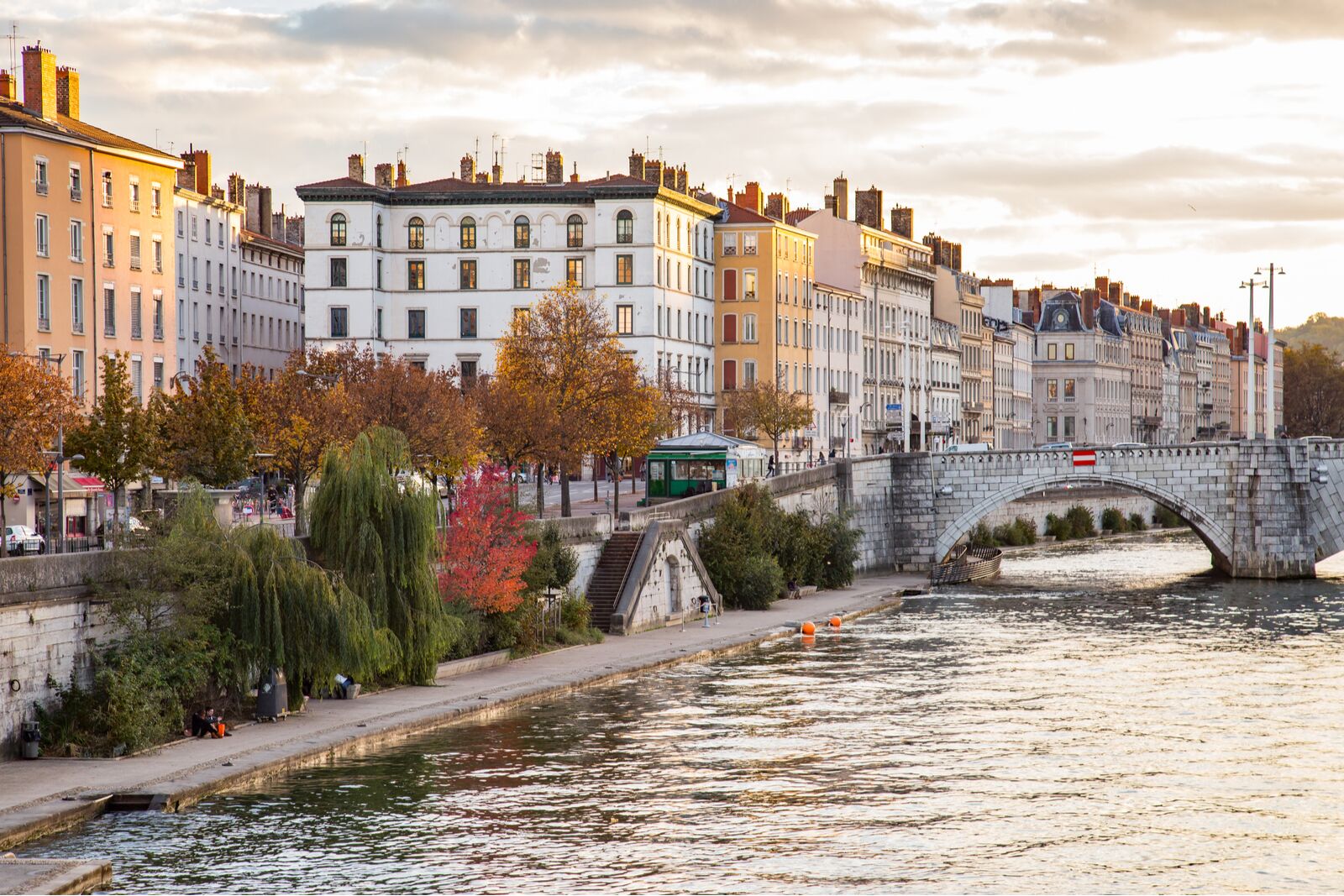 Road cyclists have eagerly awaited the development of the incredibly ambitious 815 kilometer ViaRhôna, linking Geneva to the Mediterranean. The full route isn’t finished, but some sections are already good to go. And what makes Lyon one of the best bases for cycling in France is its location in the middle of the route. You can use it as a starting point to get to the mountains or to Montpellier.

You could also ride to Lyon from Geneva via the ViaRhôna through the charming villages of Seyssel and Chanaz. It takes about a week if you start from Lake Geneva, descending from Switzerland and following the Rhone across the border, watching as mountains drop steeply into alpine lakes. You’ll climb into misty woodlands while moving west until the Rhône converges with the Saône River in Lyon. 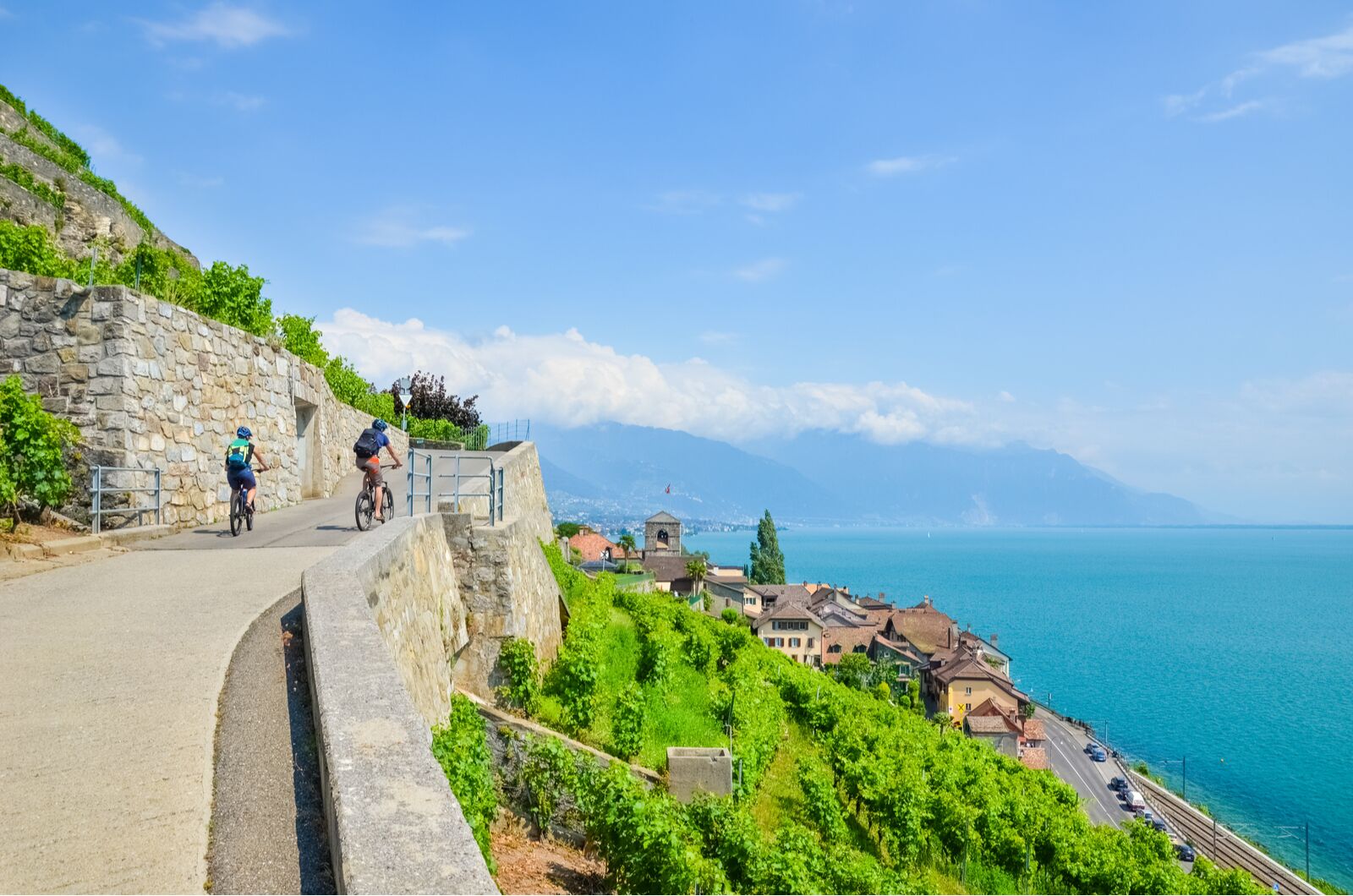 The ViaRhôna is well-marked, linking major parks and roads with greenways that pass the nearly flat Jonage Canal and the Grand Parc de Miribel-Jonage. The latter is a pretty but unremarkable island park, and while it gets busy, it’s still a good place to stop for a swim, especially after a long ride.

If you’re starting in Lyon, consider cycling through the Croix-Rousse (a lovely neighborhood just across the Winston Churchill Bridge). You can do a relatively flat route around the neighborhood in about six miles, and since it’s such a popular town for biking in France, you’ll find several shops in town where you could rent an e-bike if your legs are tired from more difficult rides. The route traces the curves of the river with spires of Lyons churches in the distance. Be sure to take a break to grab a table outside in the sun to smell the hearty dishes and spices from nearby restaurants. 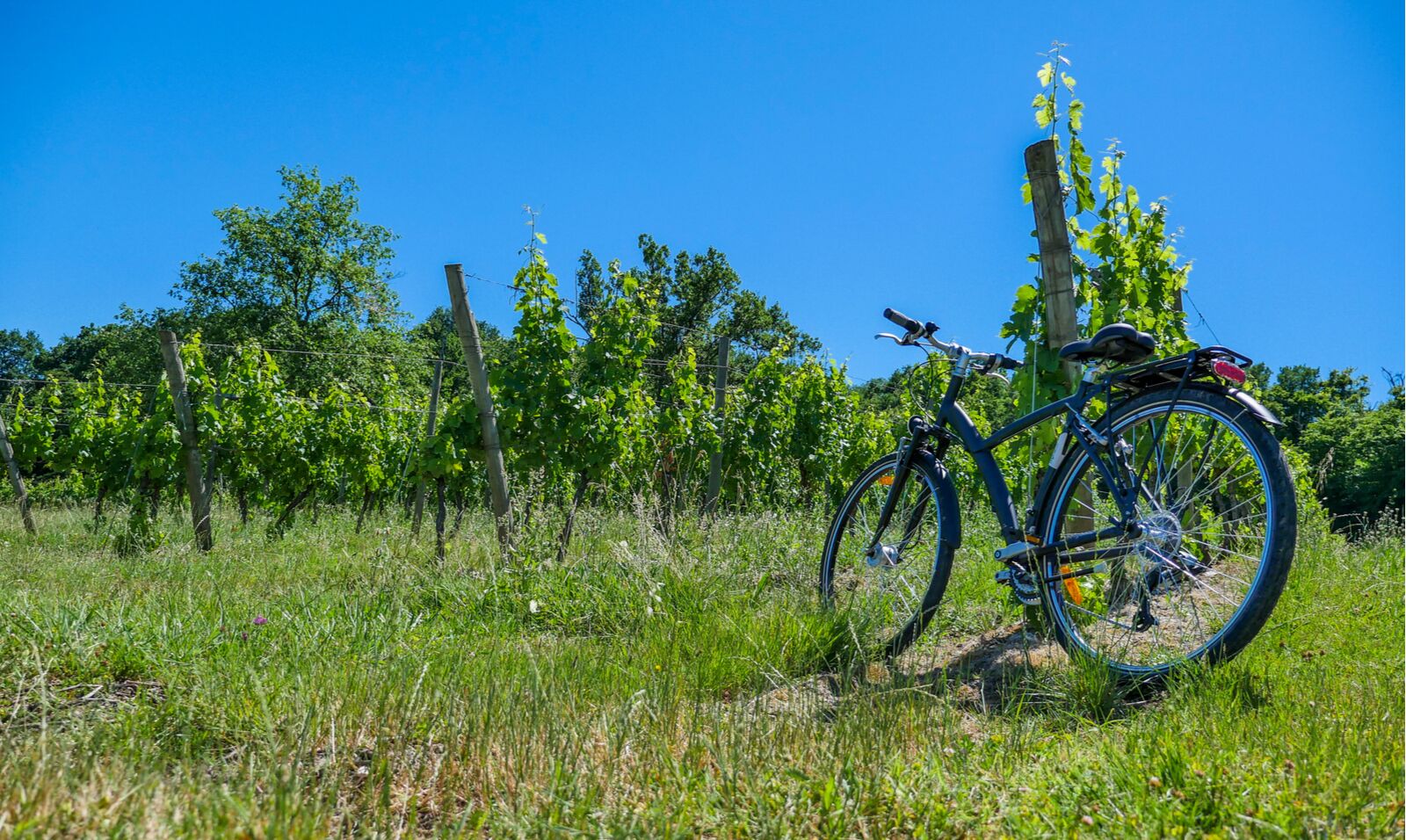 While the medieval gates and chateau-style architecture of Bordeaux’s UNESCO-listed old town are a pleasure to cycle (thanks in part to the boulevards margined by bike lanes), it’s the short ride along the river that convinces most visitors that the town is one of the best for cycling in France.

Most cyclists begin at the neoclassical Grand Théâtre and cycle to the sublime Cours du Chapeau Rouge (a main avenue) to the world’s largest reflecting pool: the Mirror D’eau. 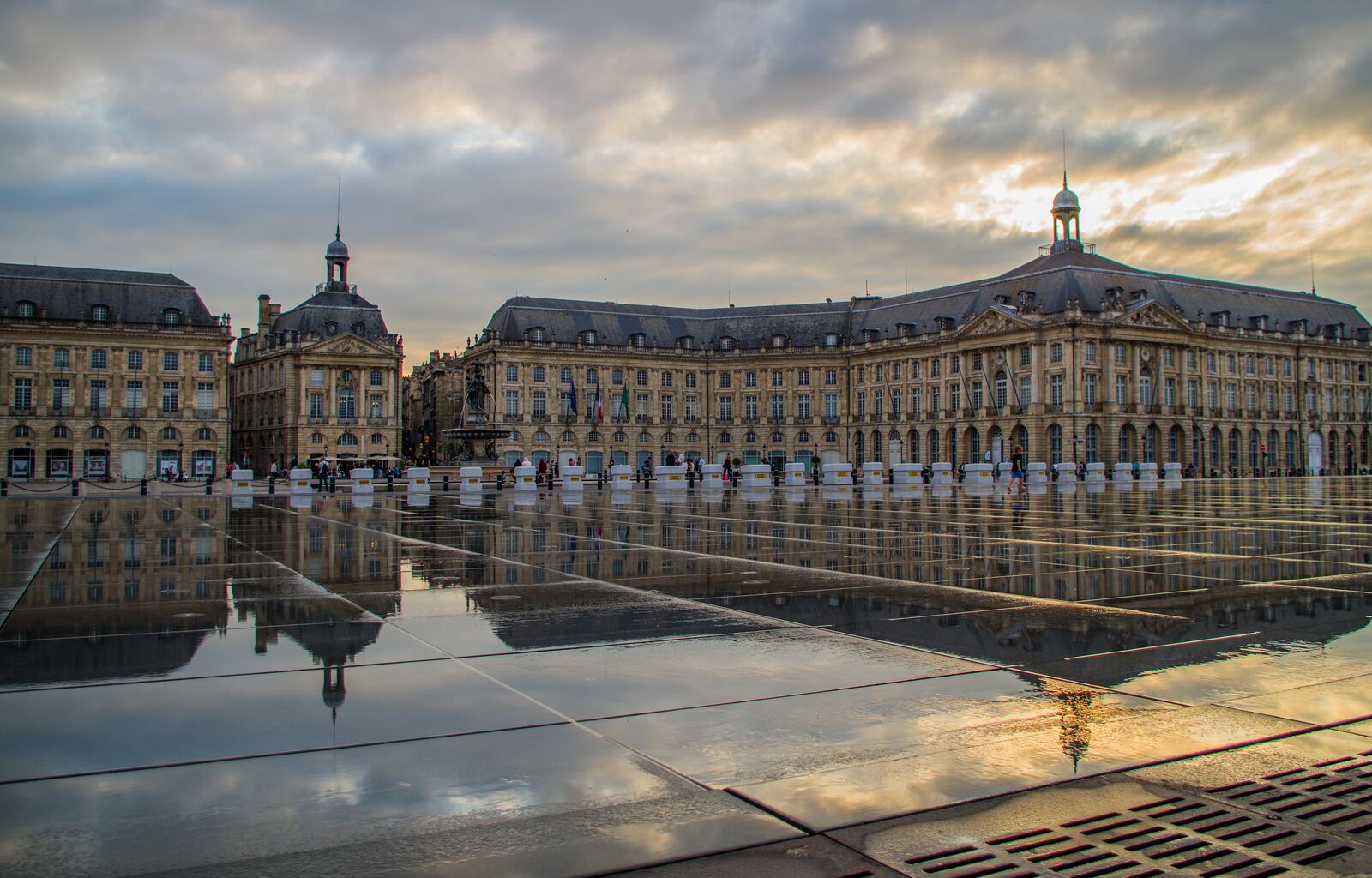 After a leisurely stroll or cycle around the pool, cycle past the Jacques Chaban Delmas bridge to La Cité du Vin – the huge, carafe-shaped shrine to wine poking up from the water’s edge. Inside are detailed wine galleries and an impressive tasting room with thousands of wine bottles suspended from the ceiling.

From there, you’ll want to cross the river to see the newer part of the city’s Darwin Center. It’s a modern community development with cafes full of mismatched and recycled furniture, an open-air graffiti gallery, and a lively skatepark. Then ride across the Pont de Pierre back into central Bordeaux to end your ride.

Bordeaux makes a perfect base for cycling in France through vineyards in the Nouvelle-Aquitaine area, but the roads can get busy, particularly in the high season. To lose the traffic, take the Roger Lapébie bike path to a scenic greenway that leads through tunnels and forests to Sauveterre-de-Guyenne, a town about four hours from Bordeaux by bike. 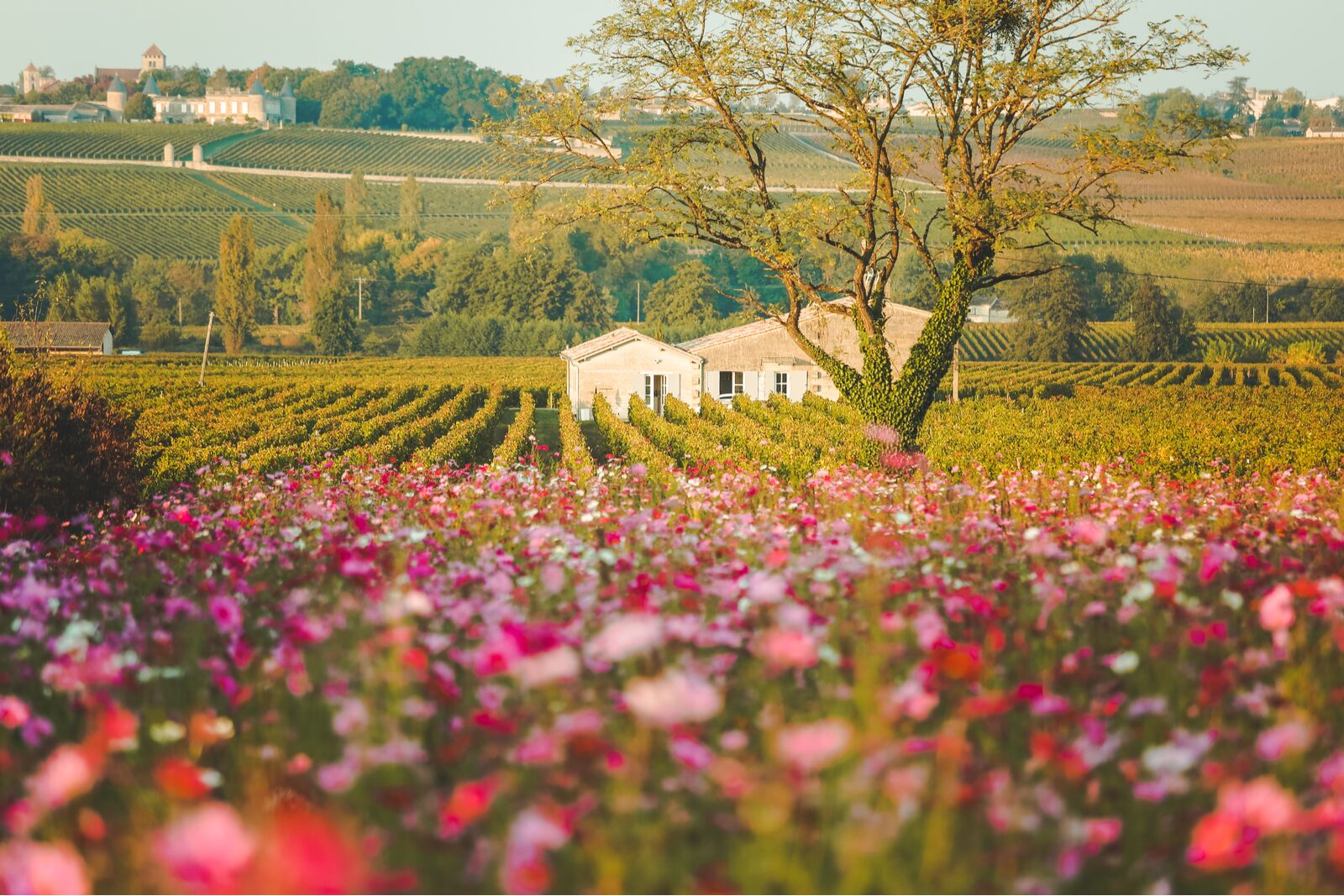 From Sauveterre-de-Guyenne, you can reach Saint-Émilion to the north in about 17 miles. You’ll take a road called the D122, which runs past cascading vineyards of the Saint-Émilion commune. It’s one of Bordeaux’s most popular wine regions.

You’ll find plenty of easy routes in the area, but for a longer ride, take the huge and overwhelming EuroVelo1 route. It’s a massive route that connects Bordeaux to northern France and runs for roughly 617 miles along the coast. Bordeaux is ideal for cycling in France as you can base yourself in posh hotels, take multiple two- or three-night trips on two wheels, and return to Bordeaux between each ride to refresh with some red wine and rich seafood dishes. The region is particularly known for oysters from the Arcachon Bay.