The first time I downloaded the language-learning app Duolingo, I was about two weeks out from a trip to Portugal. I was surprised to see an icon for the Brazilian flag representing the Portuguese course, even though Brazil’s population outnumbers Portugal’s by more than 2,000 percent, but I figured the basics of Brazilian and European Portuguese would be the same.

I figured wrong. When I got to Lisbon, simple phrases like “good morning” and “good afternoon” were pronounced so differently than the app had accustomed me to hearing them that it took me a couple of days to register the words. Other times, random words like “abacaxi” that I’d managed to memorize during my brief study were met with raised eyebrows, not because I had a tendency to shoehorn them into conversation but because, in that particular example, “ananás” is the more common word for “pineapple” in Portugal.

The experience left me with a couple of questions: How far in advance of a trip should travelers start studying Duolingo, and how well does Duolingo work when the destination you’re traveling to is different from the destination that was used as a reference point for your language course? So, when I got the opportunity to spend four days in Belgium after studying Duolingo French for three months this past summer, I jumped at the chance to find out.

How well does Duolingo actually work?

Belgium has three official languages: Dutch, the native language of about 60 percent of Belgians; French, the mother tongue of around 40 percent of Belgians; and German, which is spoken natively by less than one percent of the population. I chose to visit Brussels, the primarily French-speaking capital, because I remembered some French from a stint I spent in Paris years ago, and I was curious to see how closely Duolingo’s French course translated to the French I’d heard in France versus the French I’d hear in Belgium.

First, I needed some serious practice. Duolingo’s placement exam confirmed just how much French I’d forgotten in the decade since I stopped hearing it regularly. I was placed in Unit 3 of 199 and pledged to spend 15 minutes per day studying for 90 consecutive days.

By day five, I was hooked. I was translating sentences at breakfast, practicing my pronunciation at crosswalks, and listening to short dialogues before bed. Once, during a cabin trip to Northern California, I walked a mile into town and back to get enough internet access to complete that day’s lesson. Though I never got invested in gamification tactics like leaderboards and badges, I chased the daily dopamine hit of watching my lesson streak grow.

If the first measure of a language-learning app is user retention, Duolingo succeeds by presenting itself more like entertainment than a chore.

The second measure, of course, is efficacy.

When I landed in Brussels, I was eager to continue my learning streak in real life. The “getting around” theme of the very first Duolingo French unit I studied had equipped me with the vocabulary needed to hail a taxi at the airport. A later unit involving prepositions helped me explain to my driver, Jan, that I was going to Hotel Indigo in the city center between the botanical gardens and Place Charles Rogier. I’d practiced a few times in the taxi line. 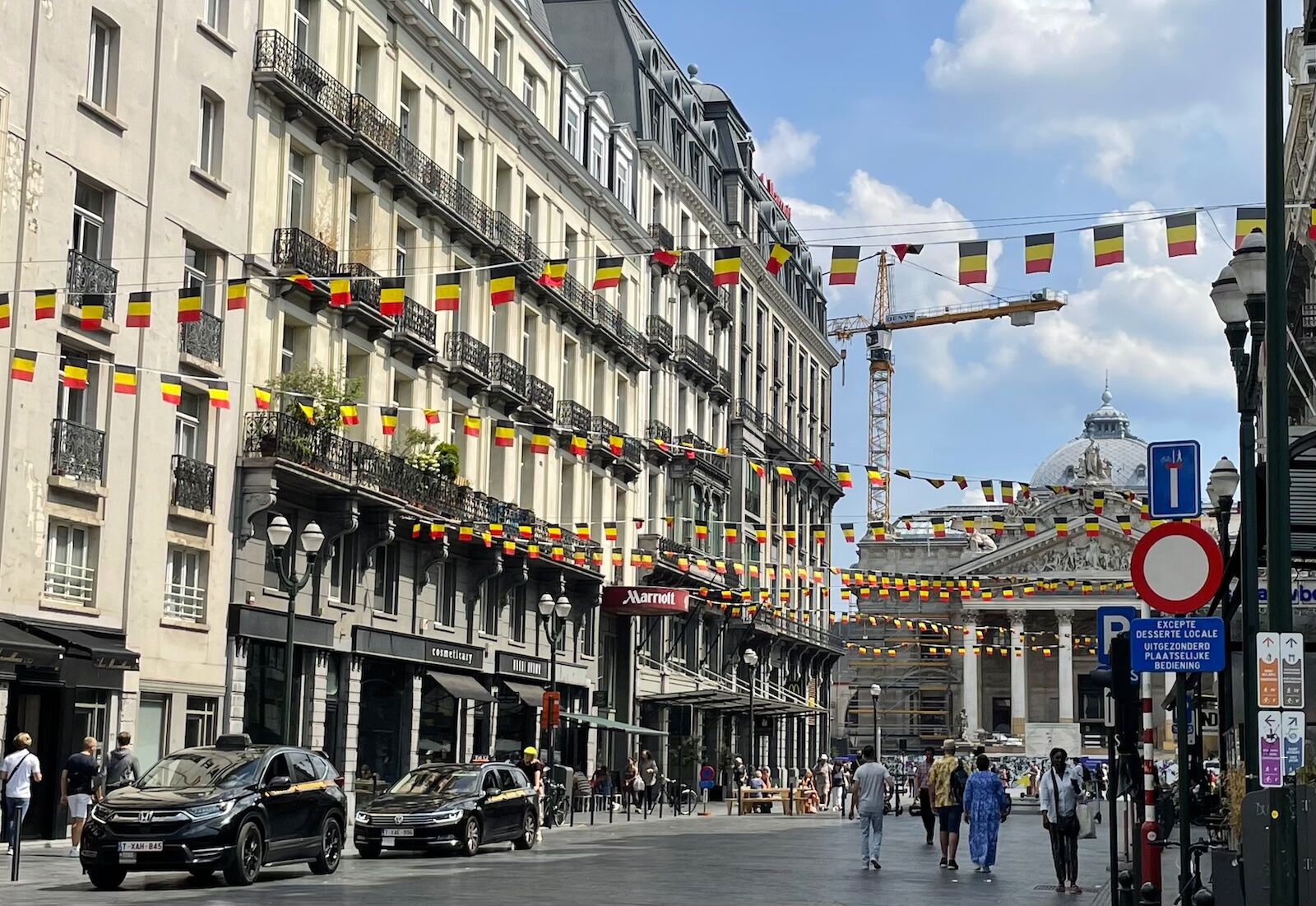 The first sign of trouble came when Jan mumbled something about a “fête nationale” when we hit traffic near the city center. We’d spent the ride chatting. He asked where I was from (“Je viens de San Francisco”) and if it was my first time in Belgium (“Oui, c’est ma première visite”). I explained that I was learning French. He assured me that it was good, albeit not good enough to follow his tirade against Belgian governance when road closure due to it being Belgium’s National Day disrupted our route. Duolingo hadn’t prepared me for that.

This is how the majority of my interactions went. I’d order moules-frites at a restaurant as the app had instructed but then stumble through small talk as the waiter tried running my card through a broken card reader. At the Magritte Museum, I opted to use the French audio guide to learn about the surrealist Belgian artist but realistically only understood a third of his biography. 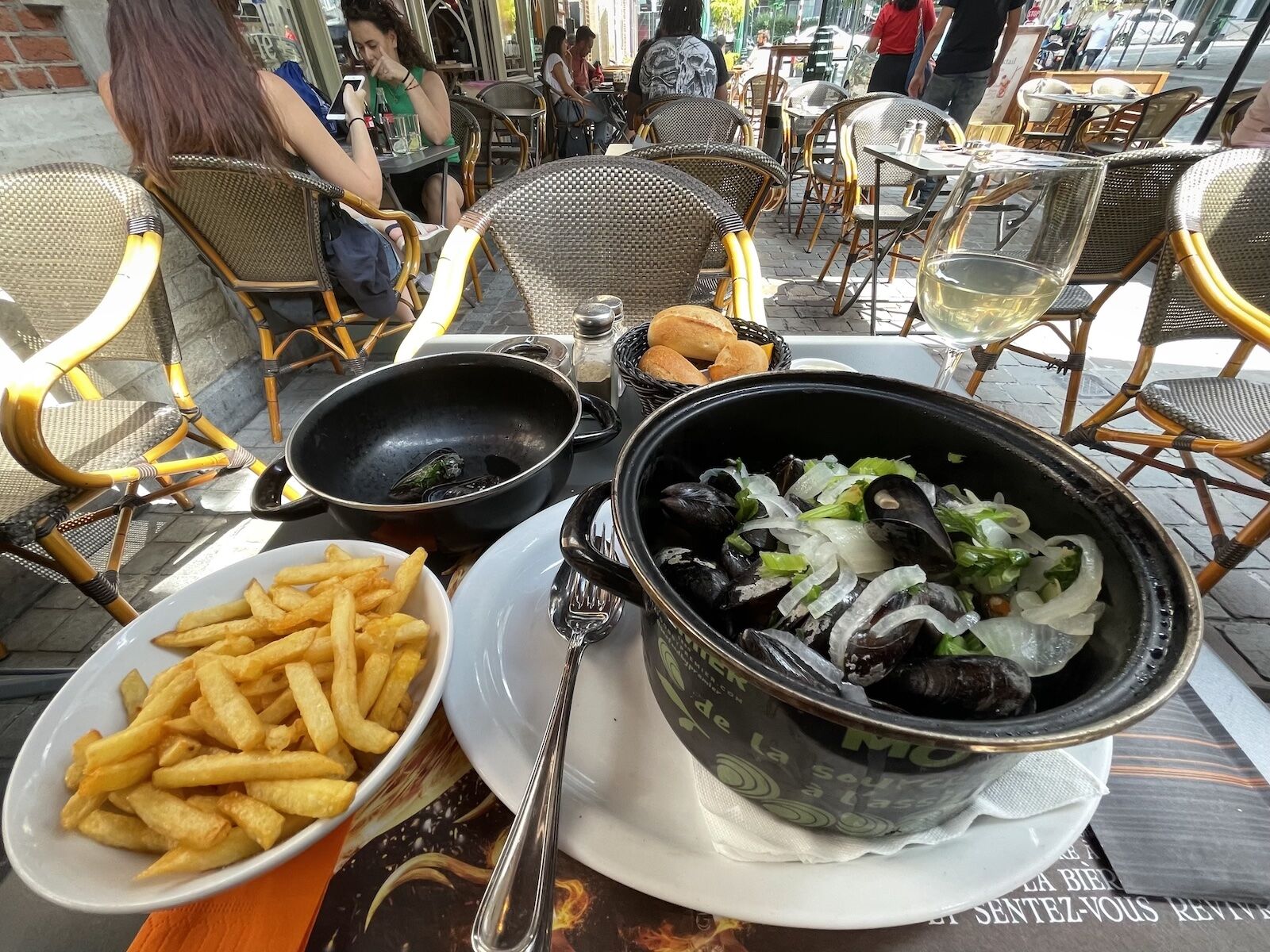 Talking with locals, if I had the vocabulary to express a complex idea, I often lacked the grammatical structure to present it, and vice versa. My most successful conversations were with an Argentinian expat I met in a cafe who’d recently moved to Belgium and was himself still learning French because we followed the same beginner’s rubric, mine from Duolingo, his from the in-person lessons he’d been taking.

This is perhaps the greatest challenge language-learning apps face: No matter how many probable real-world scenarios users are exposed to, there’s no accounting for the flow of actual, unpredictable, yet totally normal encounters.

Duolingo’s latest conversation-based exercises work to remedy this practicality pitfall. A lot has changed since the first time I used the app. Lessons now guide readers down a “learning path” rather than a “learning tree.” The content is similar but with a greater focus on audio exercises, short stories, and “spaced repetition” to re-expose users to concepts throughout their study.

These new narrative exercises achieved something no textbook I’ve thumbed has been able to accomplish: familiarize me with the cadence of a language and ease the shock of conversation when it came to speaking out loud. Duolingo got me in the habit of reaching for French words rather than English ones, and it gave me the confidence to use them with native speakers.

According to Cindy Blanco, a senior learning specialist at Duolingo whom I chatted with before my trip, that’s the Duolingo promise — not fluency but foundation.

“What Duolingo wants to do is give you a really solid foundation that you can take with you anywhere,” she explained when I’d asked how helpful the French course would be outside of France. (In the end, Belgian French proved nearly indistinguishable to Parisian French to my ear—until I tried buying a baguette, or “pain français” in Brussels, as I learned.)

No language is static, Blanco explains, whether influenced by dialect or slang, like the “TikTok French” you might hear today. “So what’s really important is to build this flexible foundation so that when your super cool TikTok waiter at the Parisian cafe says something you don’t know, you can say in French, ‘Wait, wait, wait, what do you mean there.’ You can negotiate that way … with the vocabulary or context clues to be able to figure it out … in Quebec or Congo.”

And that’s exactly what happened. In four days of attempting to speak exclusively French in Brussels, I only defaulted to using English a few times when interactions got away from me. And that, for me, is a measure of success.

When should you start studying Duolingo before a trip?

It’s hard to say how quickly Duolingo’s lessons morph into conversationalism. Different learners and languages are going to produce different results. One thing became clear to me after my short-lived Portuguese lessons though: You’re not going to learn much of a language in a couple of weeks.

Blanco recommends building the app into your travel planning early on. “I think one good way to think about it is [to start practicing] once you’ve purchased the plane tickets. You want flights, you want accommodation, maybe you start looking into tours, start learning the language … You get your visa, you get your passport, you get your language.”

Unless you tend toward spontaneous trips, that should give you at least a few months to hammer in the basics. And if my experience is anything to go by, a few months of Duolingo lessons is plenty to get you eagerly practicing your language of choice in real life.

LanguagesThe 7 Hardest Languages To Learn for English Speakers
Tagged
Languages Brussels, Belgium
What did you think of this story?
Meh
Good
Awesome