There are cities that travelers to the Old Continent will never pass on — London, Paris, Amsterdam, Prague — and others that they tend to forget entirely, to their detriment. Belgium’s many beautiful cities — with their historical architecture, grand market places, and Venice-like canals — might not be as well known as their next-door neighbors, but they have a rightful place on any Eurotrip itinerary. Instead of making a quick stop to Brussels before heading out to another well-known capital, take the time to explore the nooks and crannies of the small, multilingual, and multicultural nation at the heart of Western Europe — it’s filled with unexpected beauty that you won’t regret making a detour for. 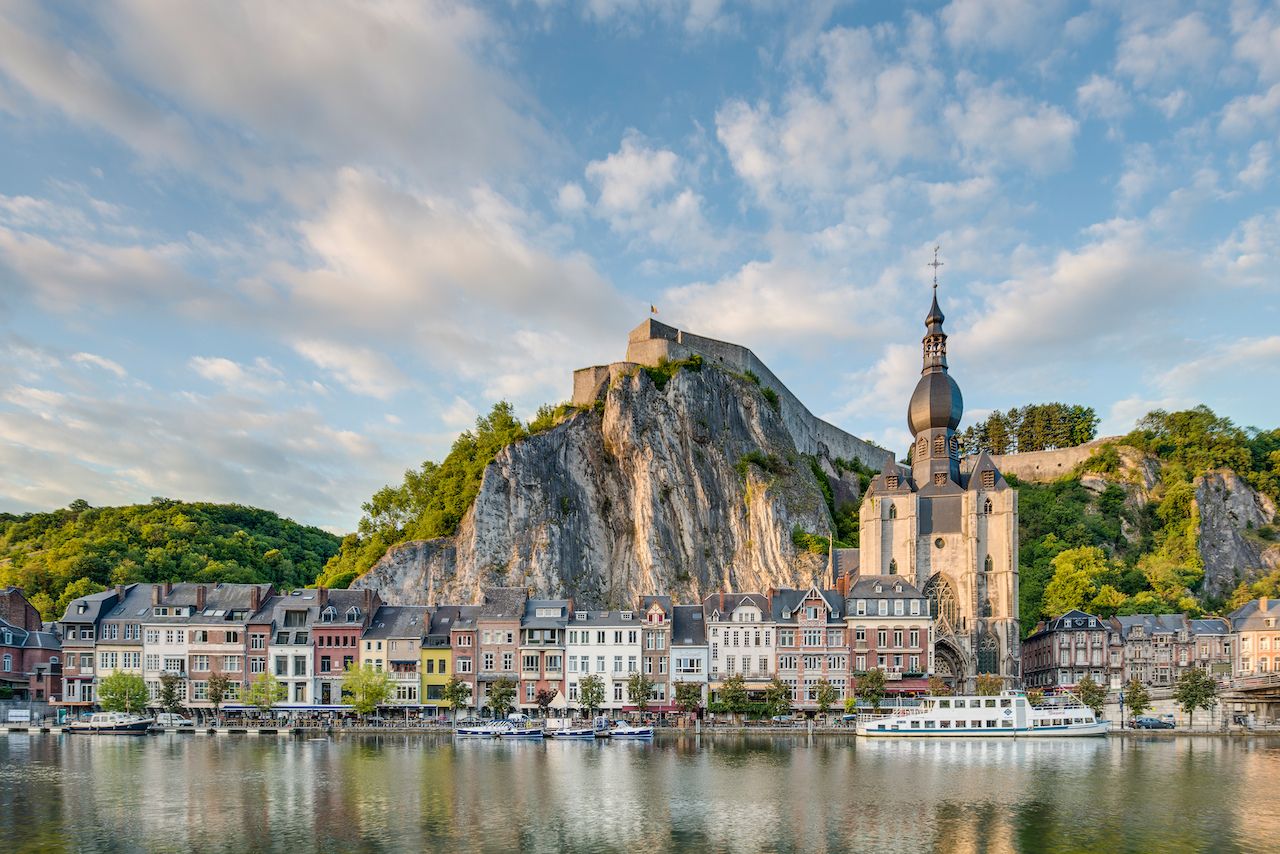 Despite having been devastated by German troops in 1914, a tragic event that saw more than one thousand houses burned down, Dinant is today one of the most beautiful cities in Belgium. Built along the River Meuse and against rocky cliffs, the city’s most recognizable and celebrated features are the citadel that dominates the colorful town from its outcrop and the large catholic church topped with an unusual onion dome. For an aerial view of the town and the landscape of the Ardènnes region, walk the 408 steps, or take the cable car, to the citadel. For a slower, more relaxing way to admire Dinant’s assets, take a sightseeing cruise along the river. 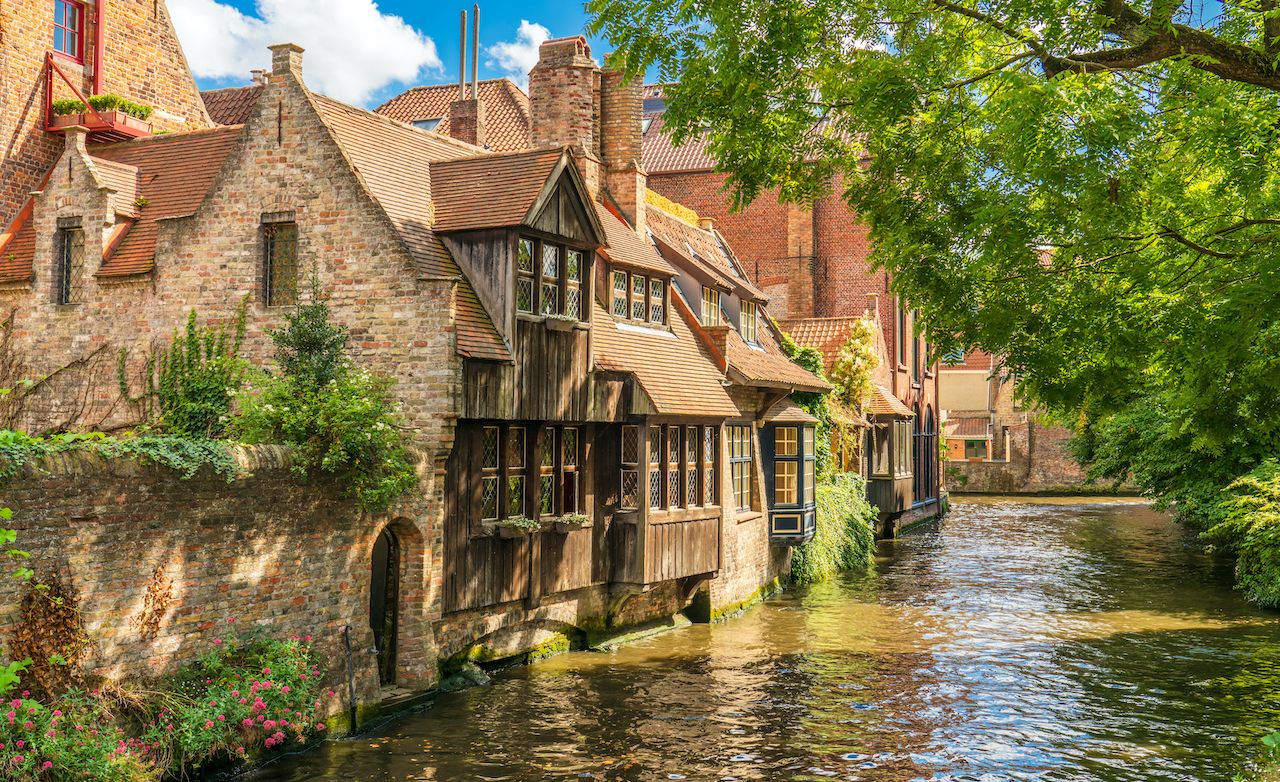 Made cool in 2008 thanks to the now-iconic movie In Bruges featuring Colin Farell and Brendan Gleeson, Bruges’ historic city center has been a UNESCO World Heritage site since 2000 for its exceptionally well-preserved Gothic architecture. In the 15th century, Bruges became a commercial and cultural hub thanks to its large network of canals that wind through the city and connect it to the sea and the rest of Europe. Today, visitors can travel on those very same canals for a slow-paced, 30-minute sightseeing tour or get themselves a map and create their own walking tour to some of the most photogenic spots, such as the Groenerei canal and its romantic stone bridge. Another highlight is Rozenhoedkaai (the Quay of the Rosary) from where travelers can see some of the most beautiful brick and Gothic structures in all of Bruges, like the Tanners’ house. Strolling the large market square dominated by the impressive 13th-century belfry (which one can climb for great views of Bruges and its surroundings) is also one of the highlights of the gorgeous city. 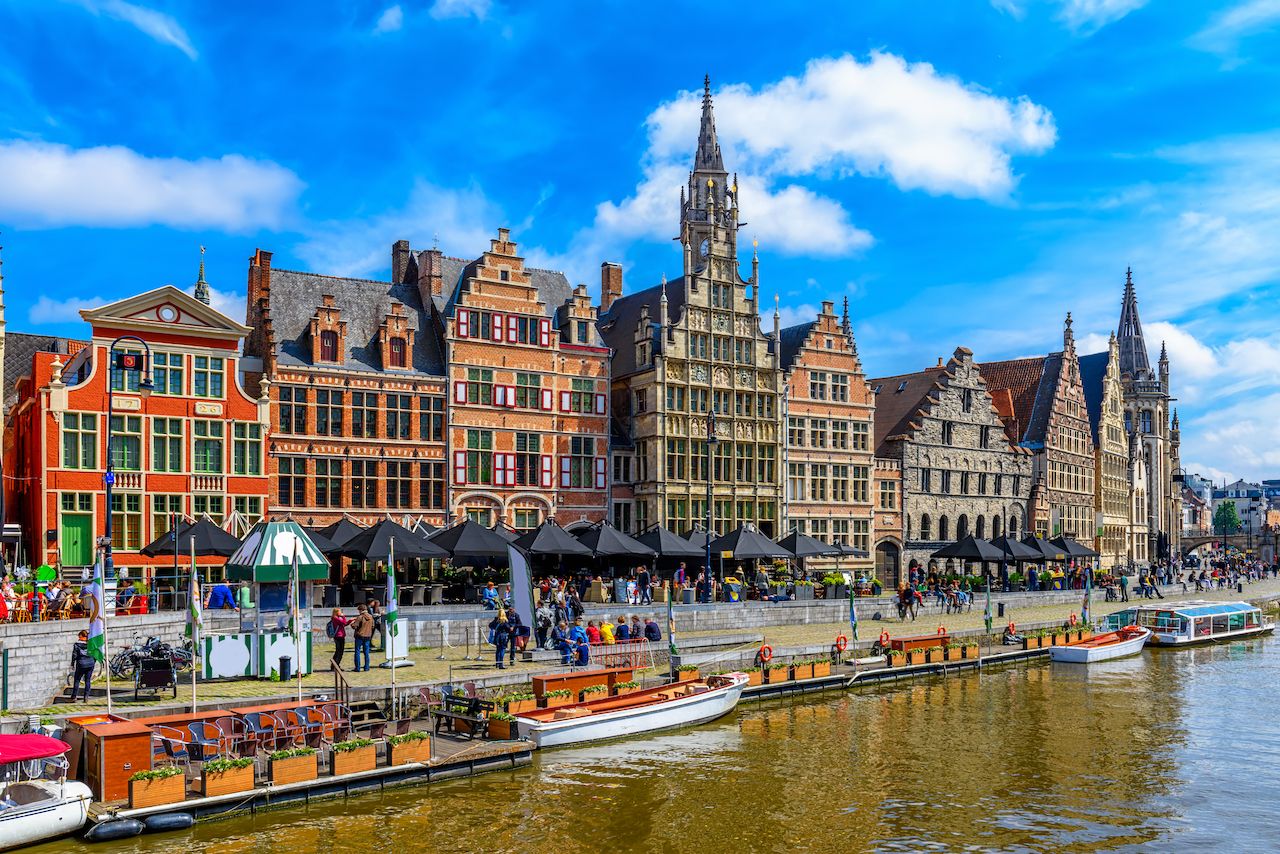 Ghent was built about 1,400 years ago, and it shows in the best of ways. The pedestrianized city center is filled with historic structures, each as beautiful and impressive as the next. Walk around the canal quays for a good look at the Flemish Renaissance houses, reminiscent of the ones you’d see in Amsterdam, and check out the 1,000-year-old medieval fortress, the UNESCO World Heritage-listed belfry (which you can climb for a incomparable views of the city), and the many churches. These include the famous St. Nicholas located on the grand market place and Gothic St. Bavo’s Cathedral, which is filled with art treasures like the famous 1432 Van Eyck brothers painting “The Adoration of the Mystic Lamb.” For a different perspective on the city, take a boat tour or even a kayak tour. 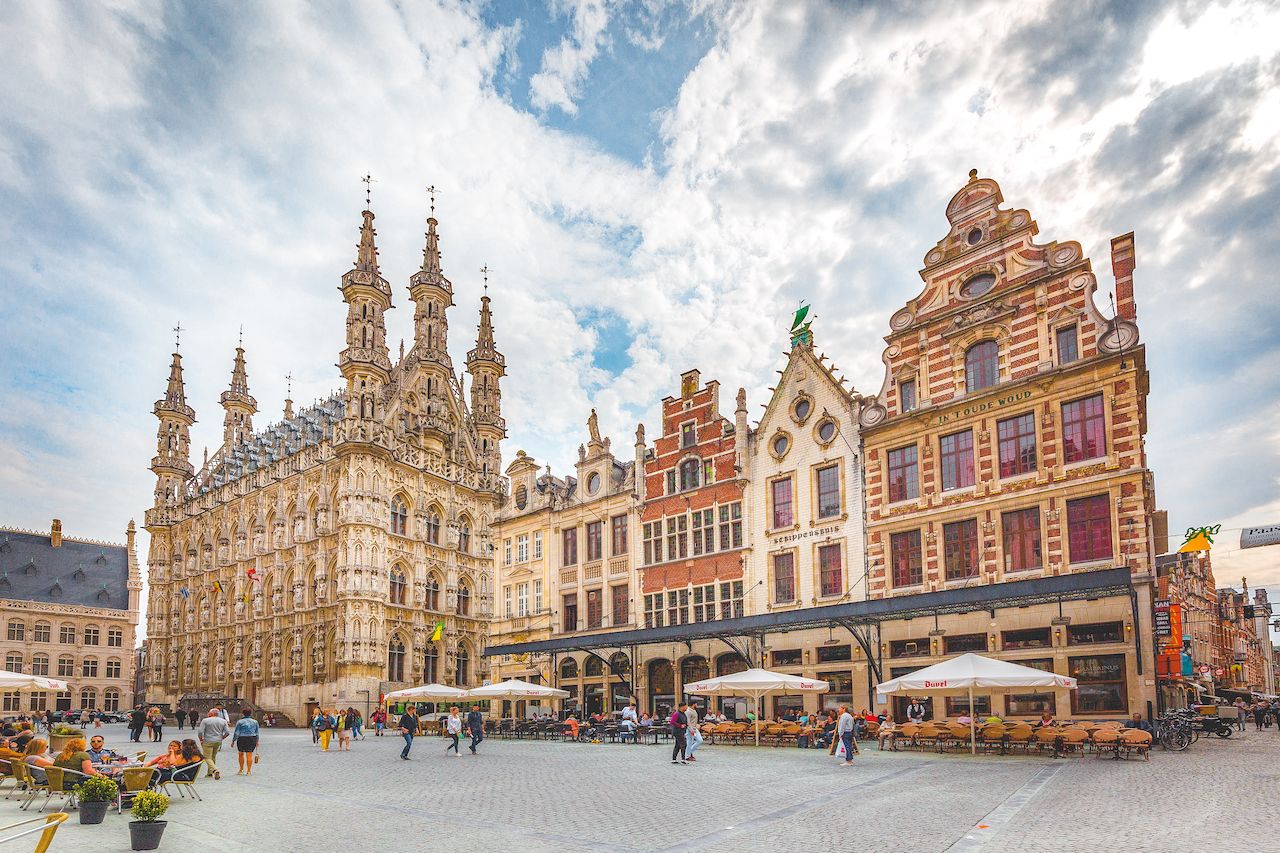 The highlight of the city of Leuven is undoubtedly its immense and ornate Gothic town hall whose facade is covered in 236 statues. Check out the outside and, if intrigued enough, partake in one of the daily guided tours to learn all about this fascinating building. The university library and tower, located on a large square, is also worth a visit as it is likely nothing like your local college. The outside is impressive enough, but it’s the reading room that takes the cake with its beautiful wooden interior, which you can visit daily. Make sure to walk up all the way to the university tower’s balcony for superb views of the city. When you’ve had your share of pretty buildings, head over to the world’s largest brewery, Brewery Stella Artois, located 15 minutes on foot from the city center. The brewery can be visited every Saturday between 1 PM and 3 PM. 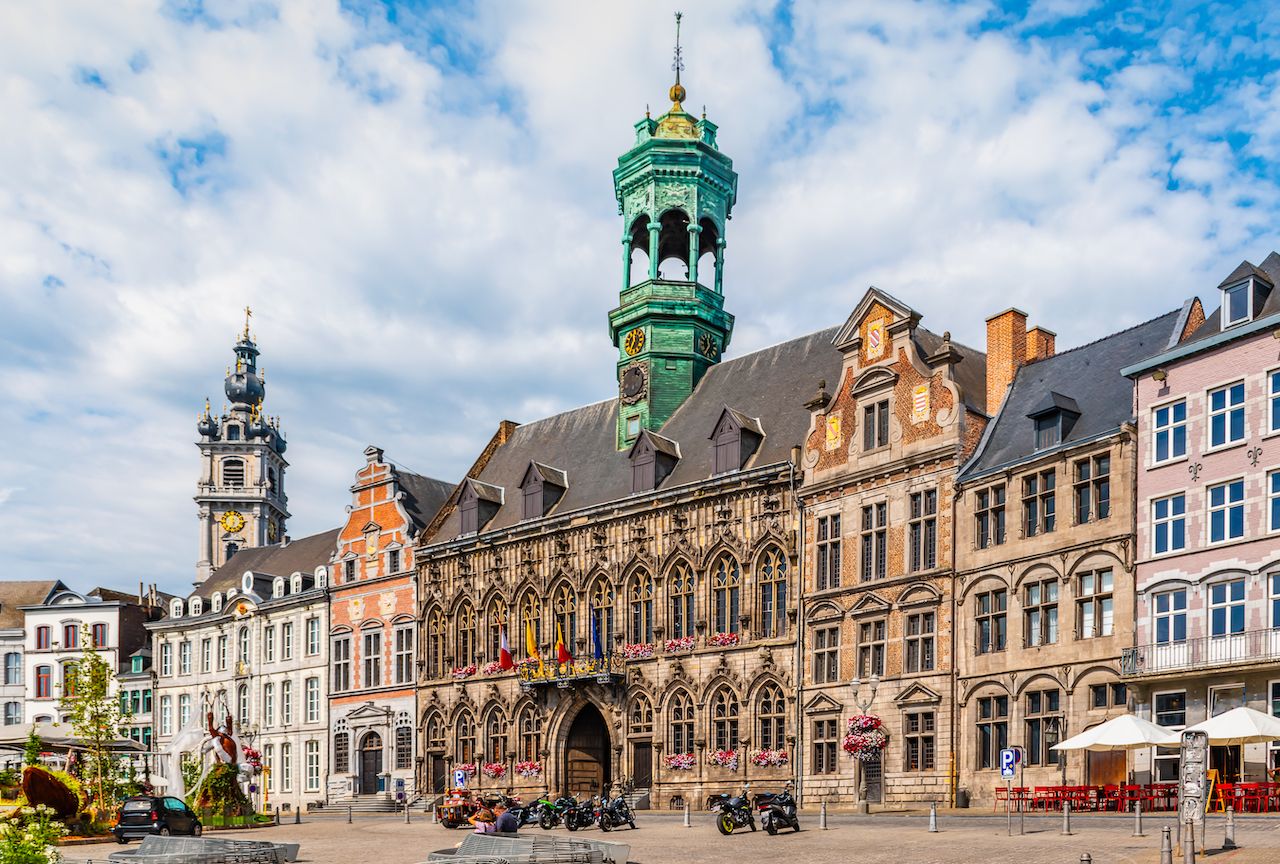 Like the other Belgian cities on this list, Mons is full of beautiful historical structures like the 17th-century Baroque belfry (listed as a UNESCO Heritage site and which you can visit), the large and intricate St Waltrude’s Collegiate Church, the elaborate 15th-century town hall, and the city’s main square, the Grand-Place, which is considered the beating heart of Mons. Beyond those well-known attractions, Mons is full of street art pieces, from murals to sculptures. Download this street art map and mix up centuries-old architecture with a more modern take on the city for a refreshing visit. 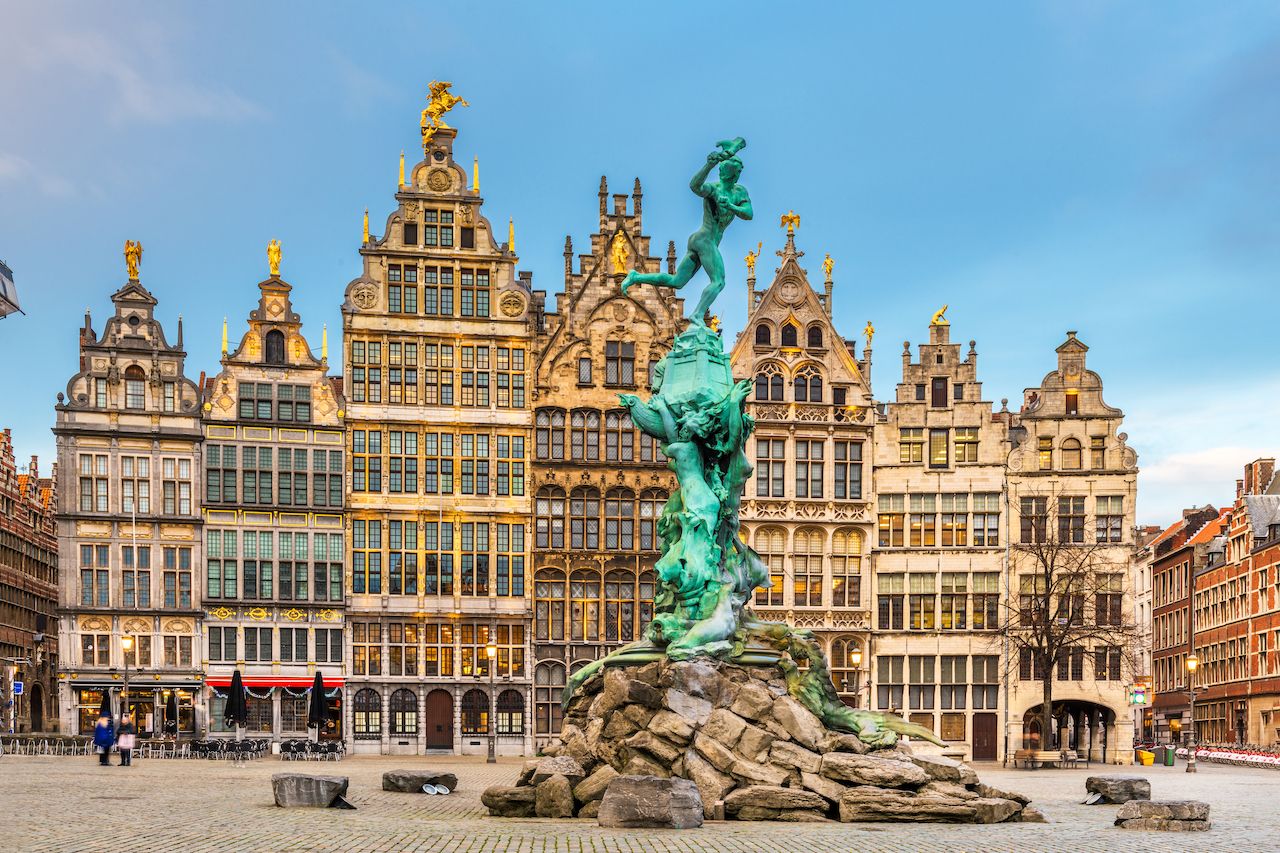 Antwerp was devastated during WWI, and large swathes of the city were rebuilt in the first half of the 20th century in a functional modernist style. The city is also Europe’s second-busiest seaport, so it has an undeniable industrial vibe that is reinforced by innovative architecture like that of the Port House (design by Zaha Hadid Architects) or the MAS Museum. But despite all this modernity, the old city center of Antwerp retains the charm of a time past whether it is in the medieval Steen Castle, the oldest building in Antwerp, or the Gothic Cathedral of Our Lady. The heart of the city, Grote Markt, a large market square that used to be the gathering point of merchants from around the world, remains as impressive today as it did centuries ago, with its cobblestone streets and Flemish Renaissance buildings, including its UNESCO World Heritage-listed town hall. 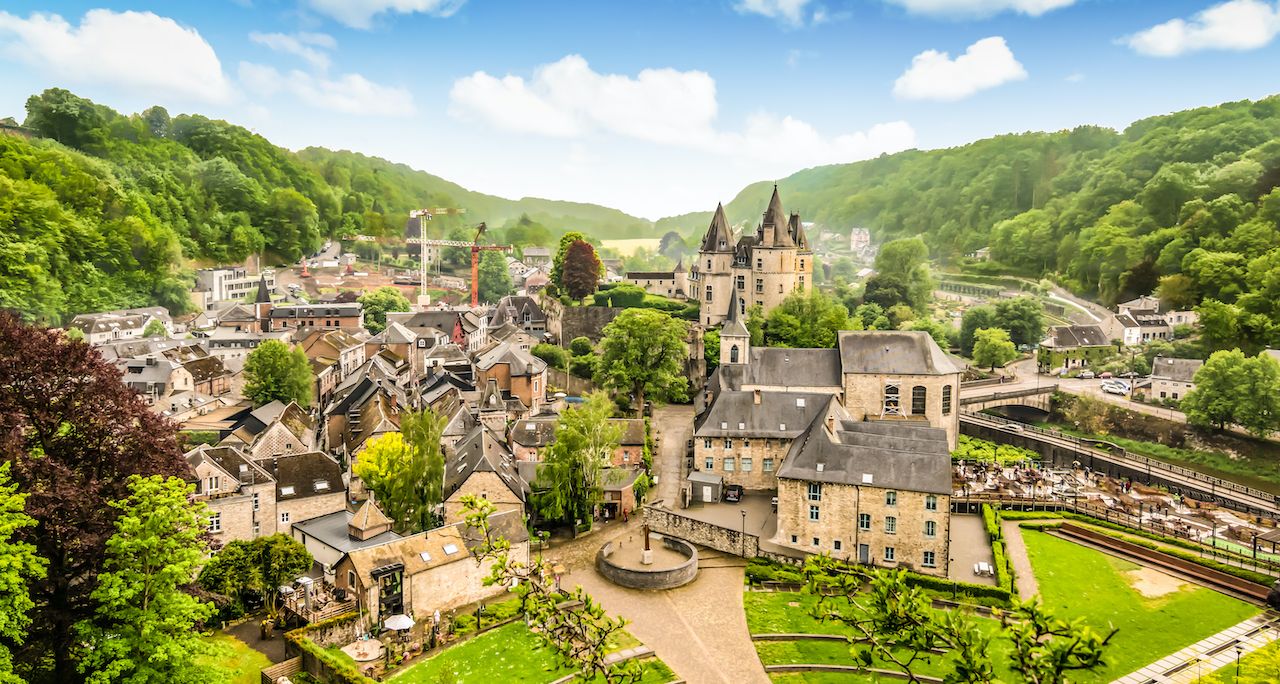 Known as “the smallest city in the world,” Durbuy’s historic city center has indeed only 400 lucky inhabitants, but it’s a well-known destination in Belgium, so you won’t be the only one walking its cobblestone streets and checking out the gorgeous stone and slate houses from the 17th and 18th centuries. Located in the wooded Ardènnes region, it’s surrounded by forests and valleys, so you can hike and camp in between cultural visits to Durbuy’s St. Nicholas Church and the Museum of Modern Art located in a former 16th-century wheat market hall.