Among Europe’s big cities, Brussels doesn’t always get the attention it deserves. Yet Belgium’s capital has prime architecture, public parks, and 19 municipalities, each with its own distinct vibe. These include trendy Ixelles, artsy Saint-Gilles, and the city center with its Grand-Place on the main square, surrounded by opulent buildings. Add to that a unique artistic sense, excellent cuisine, and multilingual conversation — French, Dutch, and German are all official languages, and English is widely spoken — and you have a lot to explore in one short weekend. Here are some ideas to get you started.

1. Go up inside the Atomium. 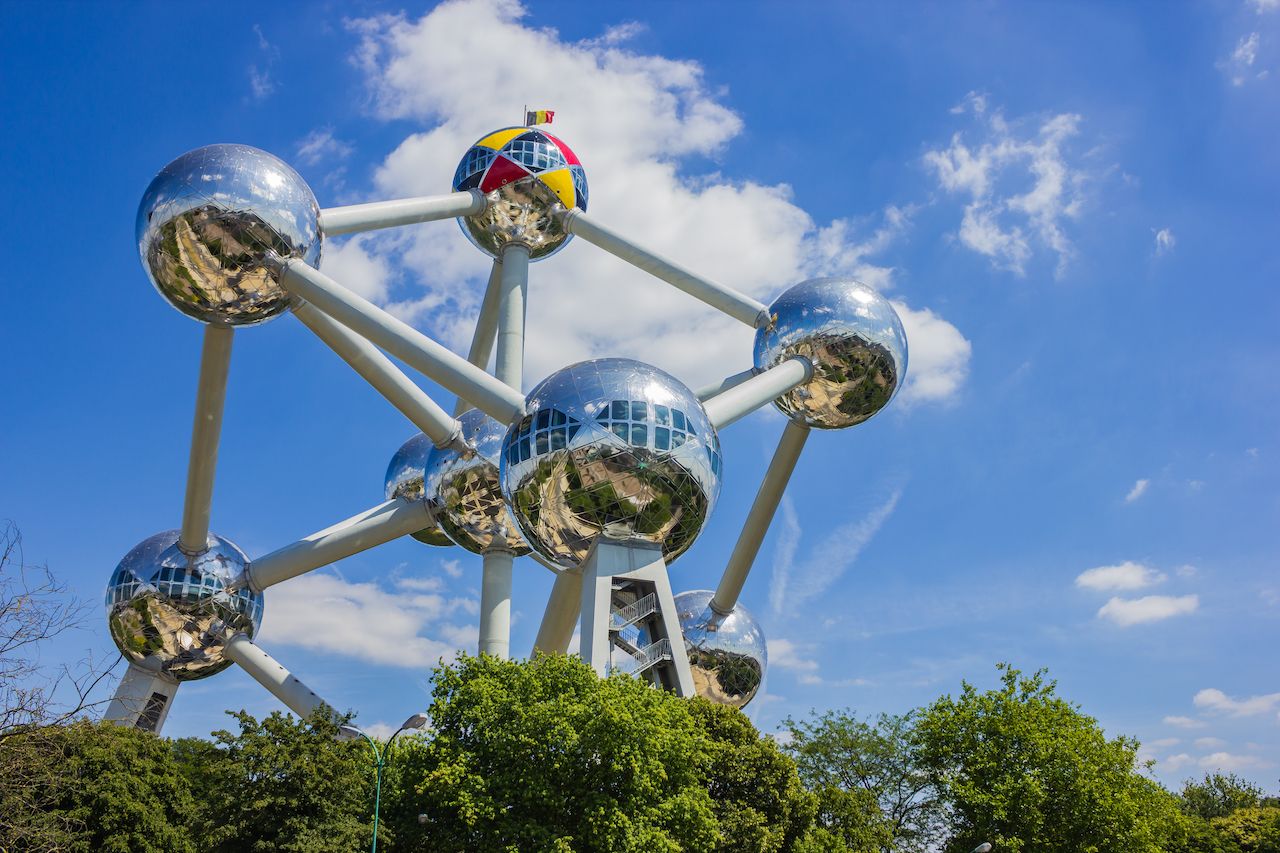 This shiny metallic attraction in Heysel Plateau in the north of Brussels was originally built for the 1958 Brussels World’s Fair, or Expo 58, but now serves as a timepiece. Designed to depict the Atomic Age, this set of nine spheres was supposed to be dismantled once the World’s Fair was over. However, the fixture won Belgians over and became a beloved landmark.

It was restored in 2006, and now you can go inside and up escalators to two levels. Take in the permanent and temporary exhibits, and more importantly, orient yourself with an overhead panoramic view of Brussels. To enjoy the view longer, stay for a meal of Belgian dishes or seasonal specialties within Atomium’s restaurant within its top sphere. (Reserve a table in advance, to be safe.)

2. Giggle at the Manneken Pis statue. 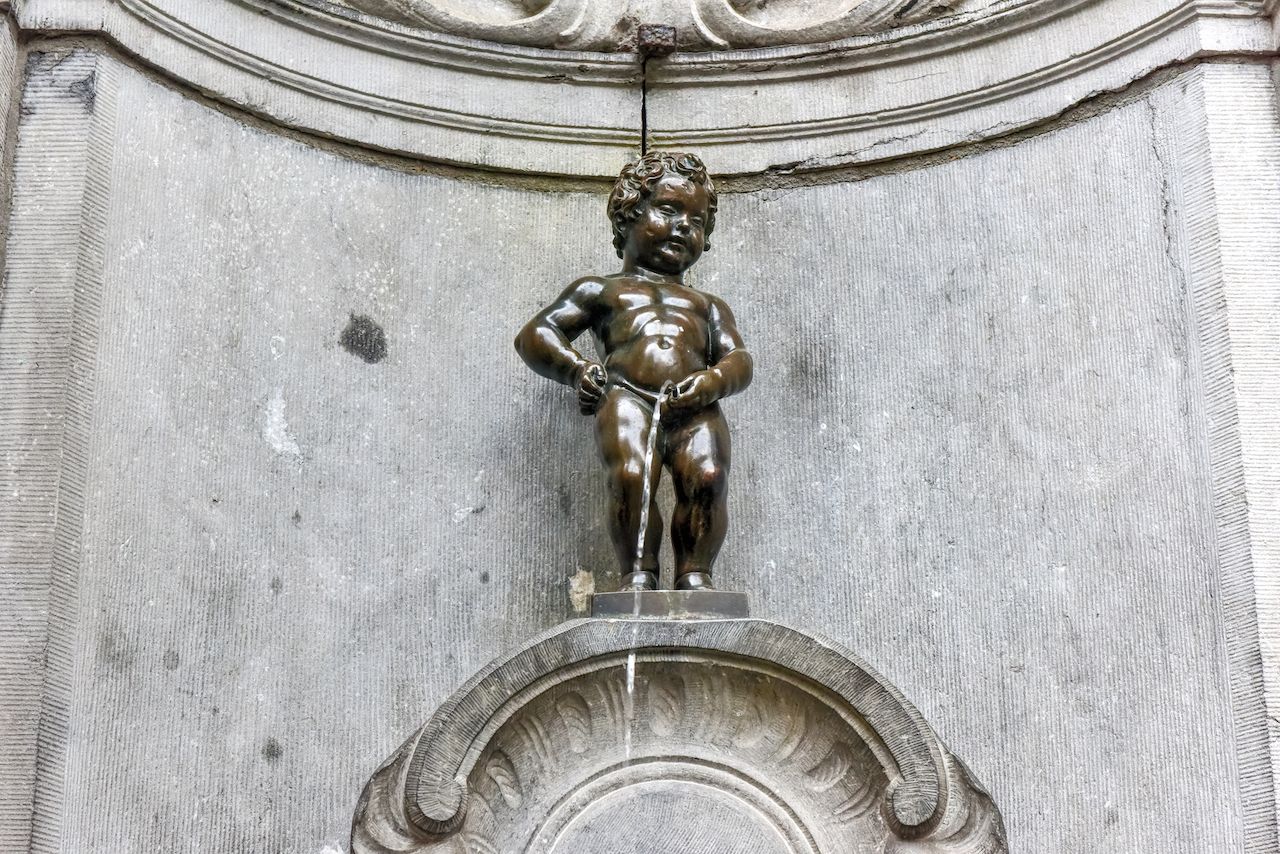 This bronze, pint-size statue of a naked boy urinating in a fountain sounds gross, but this little guy has been a Brussels’ city center fixture since the 15th century. Manneken Pis has had some stories about him, from being a boy who saved Brussels from burning down due to peeing on the flames to being the lost son of a rich man who found him taking a whiz at a street corner.

In reality, Manneken Pis had an important job back in the early 1600s: aiding in the distribution of water through a system by standing on a column and pouring water into a stone basin up until the 19th century. He’s also been through some bumps, having survived a bombardment of Brussels in 1695 and being stolen but returned a few times. (The original one sits in the Brussels City Museum.) These days, Manneken Pis gets dressed up throughout the year in attire based on themes or events. In 2017, the GardeRobe MannekenPis opened as a costume museum that displays and stores his wardrobe. 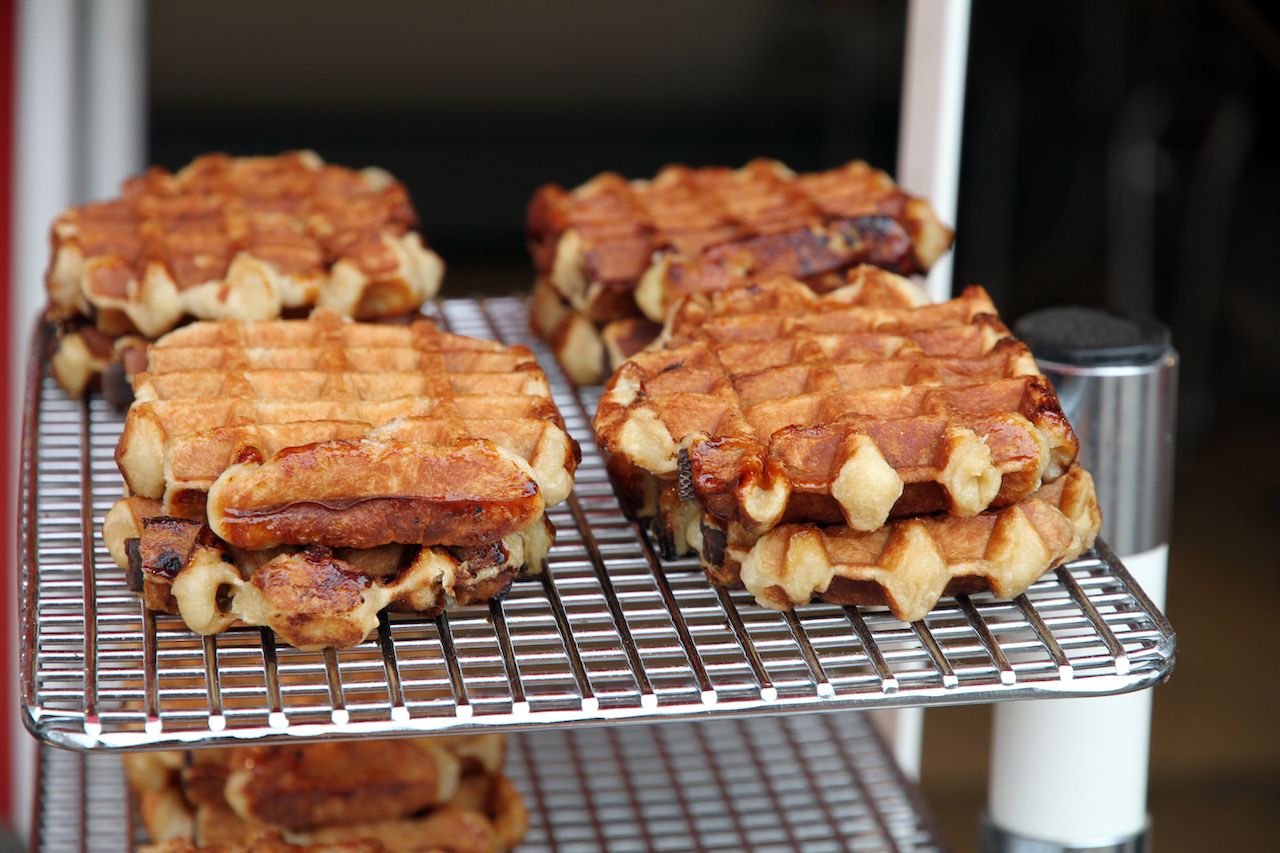 You’ve never really had a waffle until you’ve tried a Belgian waffle, a special treat that’s very simple but incredibly tasty. The waffles are traditionally made with yeast, which gives them an airy texture and makes them crispy on the outside but light and fluffy on the inside. Try a Brussels-style waffle, which comes topped with powdered sugar and a dollop of whipped cream or a drizzle of melted chocolate. Another waffle version is the Liège, which has an oval shape and is sweetened with pearl sugar, compressed nibs of sugar. 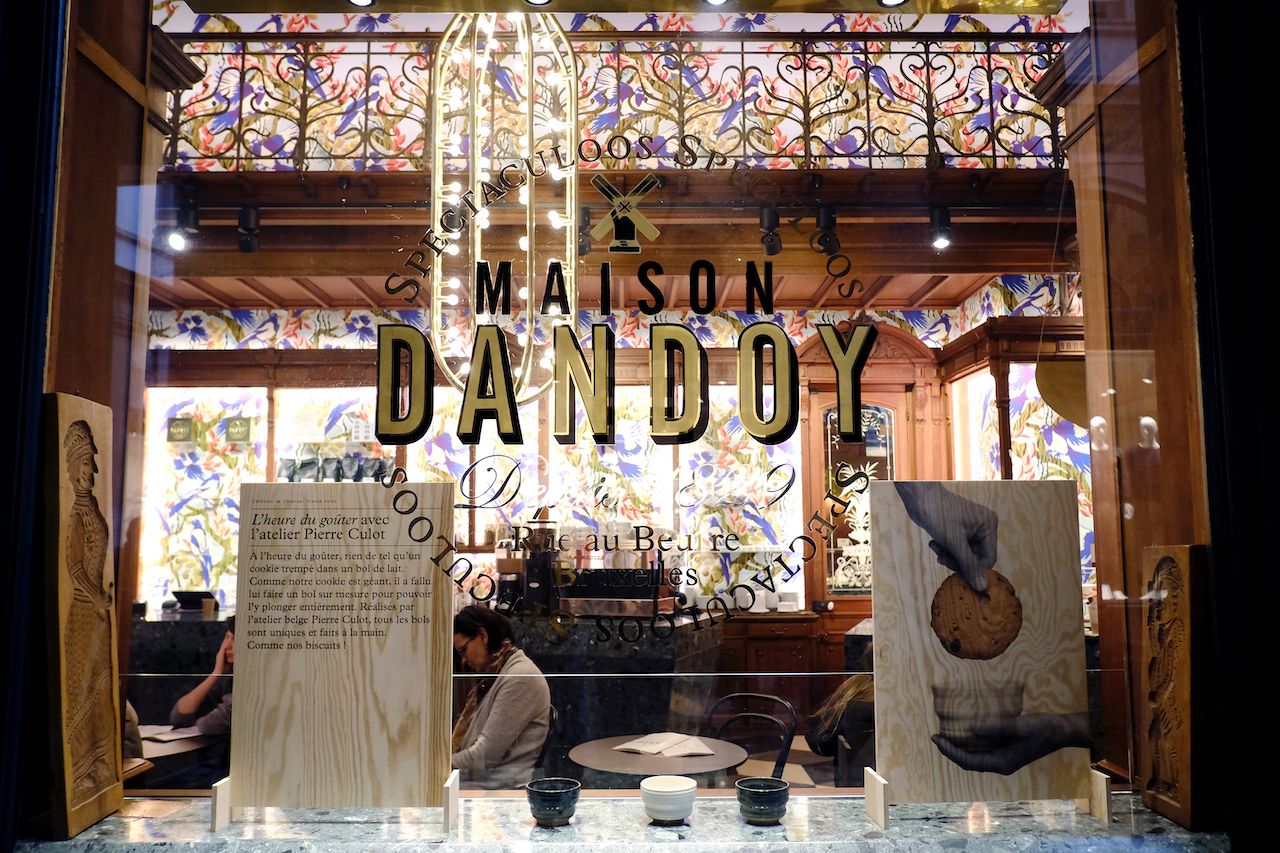 Try either type of waffle at Maison Dandoy, a bakery founded by the owner’s great-great-great grandfather in 1829. It has several locations, including one with a tearoom at its City Center address on Rue Charles Buls; consider their speculoos, or spiced shortbread, as a crunchy topping. In Saint-Hubert Royal Galleries, Mokafé is a longtime bistro with waffles and other Belgian delights, while the Waffle Factory near the Manneken Pis sculpture has traditional and experimental orders such as a LunchWaf sandwich. 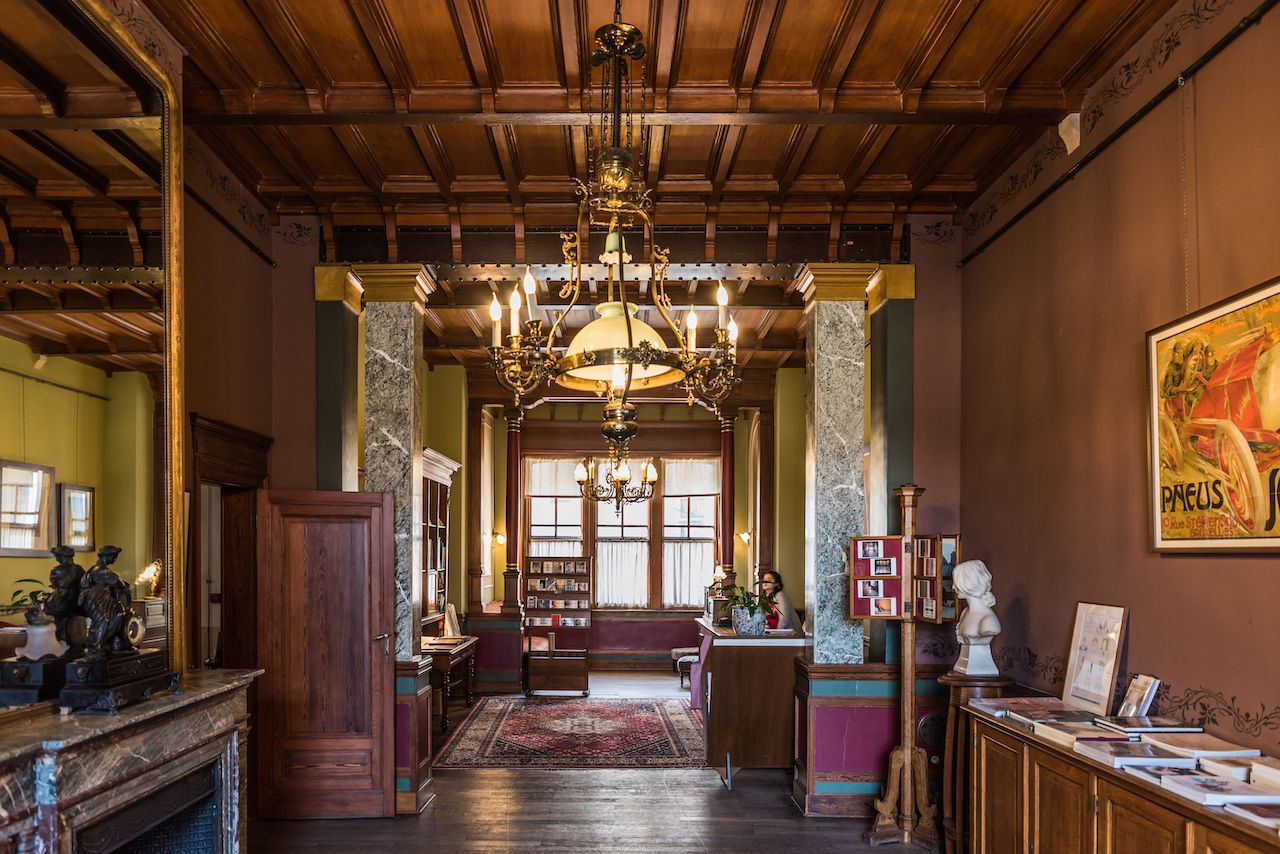 Art Nouveau, an architectural style centering on natural forms, can be found throughout Brussels. Belgian architect Victor Horta is considered to be the father of Brussels’ Art Nouveau, and you can see his work throughout the city. The Horta Museum is the house that Horta lived in for 20 years in Saint-Gilles, which today is a boho, multicultural area. The house’s interior reflects Horta’s work through its mosaics, stained glass, and elegant wall decorations.

You can view other examples mainly from outside. The Hôtel Tassel, a townhouse built in 1893, is where Horta first applied his theories in Art Nouveau — using an exposed metal structure, integrating décor with form, and being fluid with spacing. In the hip Ixelles neighborhood, Solvay House is a luxe townhouse built for an industrialist with eye-catching altered metal framing and glasswork. There are other game-changers in Brussels’ Art Nouveau heritage. Designed by Belgian architect Paul Hankar, Maison A. Ciamberlani is named for the painter it was built for; its façade has beautiful frescos and oriental design windows. 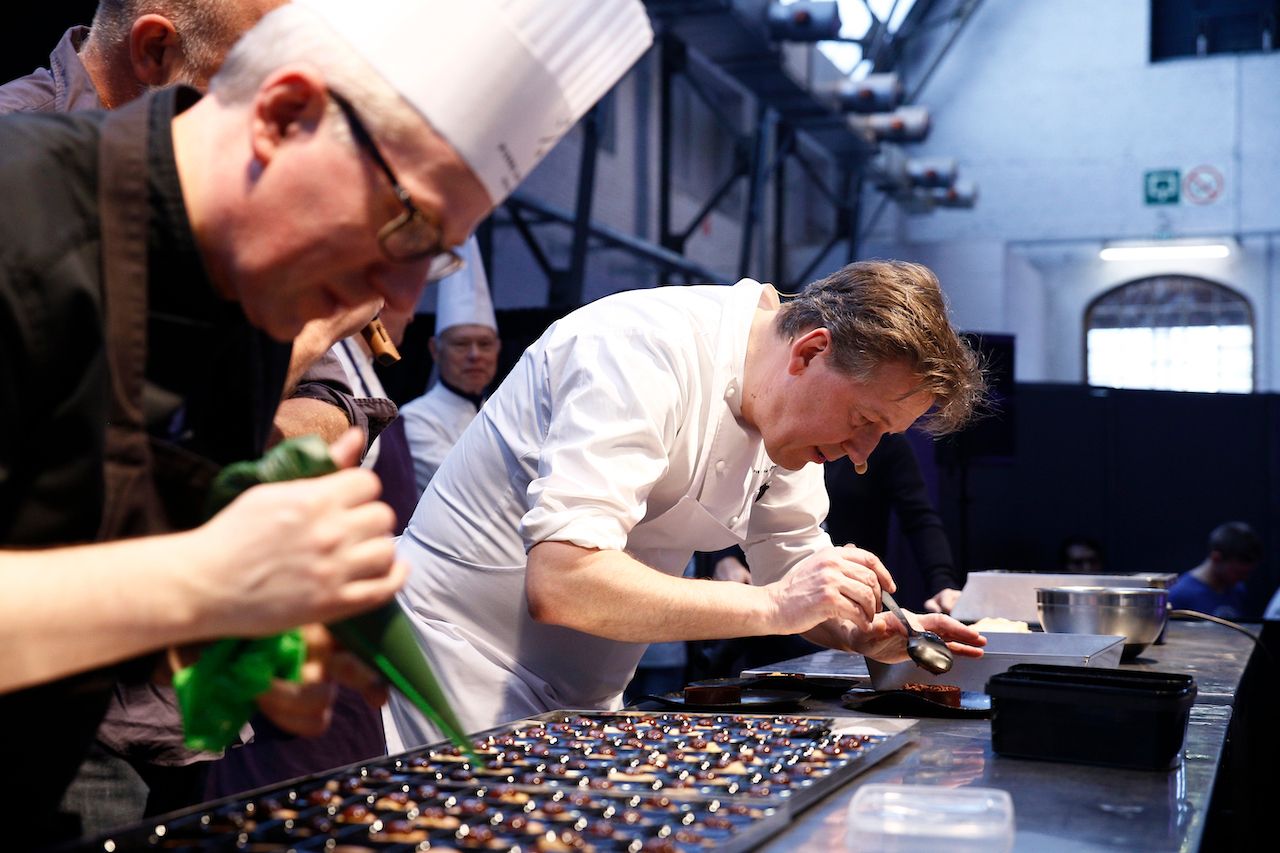 Brussels and chocolate have a sweet relationship, and many confectionaries create exquisite bars, truffles, and other chocolaty goodness packaged in beautiful boxes. Within the city center, Galeries Royales Saint-Hubert is where Neuhaus created the praline; it’s said that pharmacist Jean Neuhaus came up with it while trying to make medicine make better. The shop has different locations throughout Brussels.

Mary Chocolatier, which also has multiple addresses, is a century-old artisan shop that makes everything from chocolate squares to truffles to pralines. Within the Sablon district, Léonidas Chocolates is a Belgian institution known for its chocolate dipped fruits, marzipan, and napolitains, while master chocolatier Maison Pierre Marcolini roasts his own cacao beans, and Belvas emphasizes fair trade practices and has gluten- and sugar-free choices. In Mont des Arts, Laurent Gerbaud Chocolatier holds decorating workshops that let chocolate-lovers add on kumquats, sesame seeds, ginger, hazelnuts, and other unique toppings. 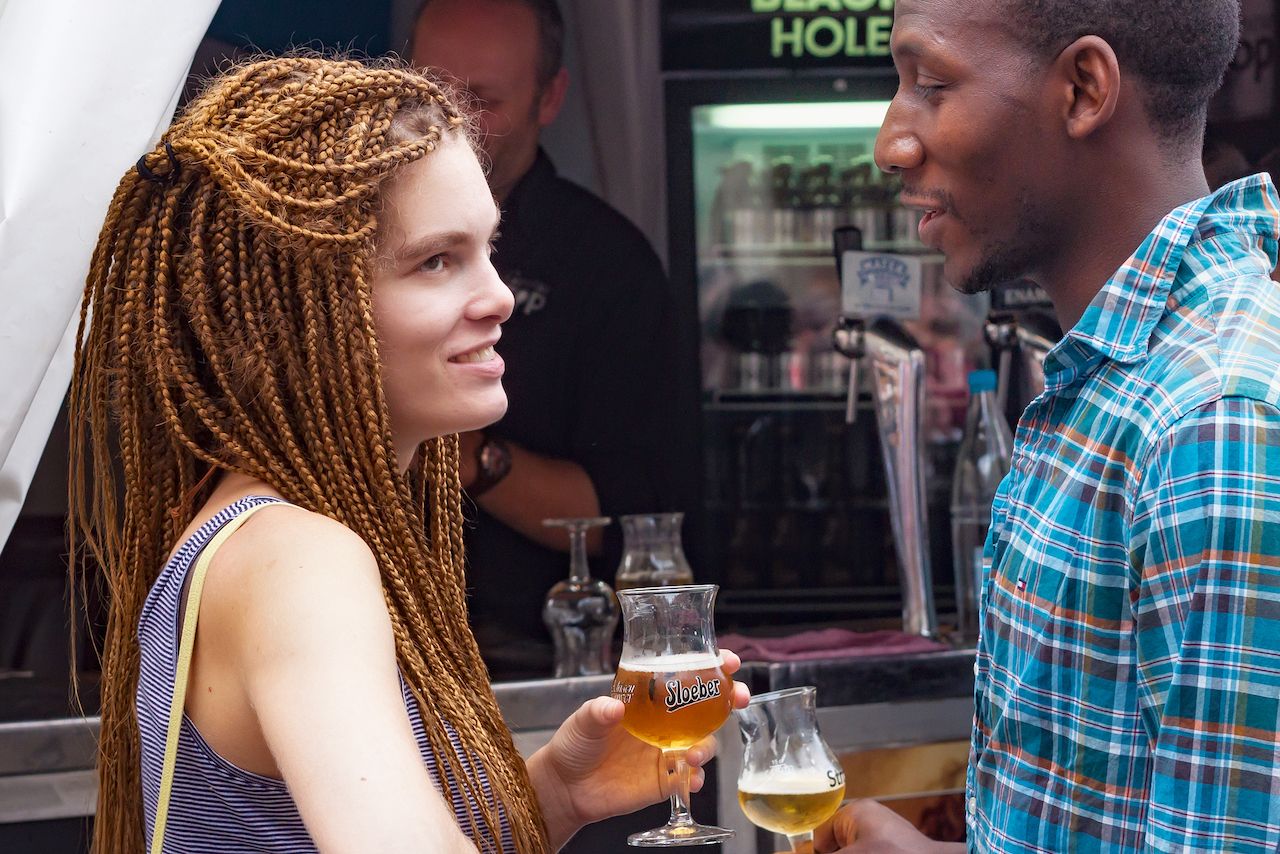 After taking in city sights, relax over a glass of one of Brussels’ most excellent liquid creations: beer. Belgium has been brewing craft beers long before they became a thing. Today, the industry produces great varieties, which you can sample at pubs, breweries, and beer halls. There’s even a Belgian Beer Weekend in early September in the Grand-Place.

Headquartered in Dansaert, the Brussels Beer Project works as a cooperative in constantly developing new beers and fostering brewing dialogue with like-minded brewers and beer drinkers. This microbrewery’s resulting creations can range from a Belgian IPA to their Grosse Bertha, a blending of the recipes of a malt-heavy tripel beer and a hefeweizen. Brasserie de la Senne is also a small brewery with an emphasis on traditional methods and producing beers with lower alcohol level content. As a nightlife spot, Delirium Café has quite the long beer list — with just over 2,000 choices from Belgium and all around the globe — so much that it earned a Guinness Book of World Records title in 2004. 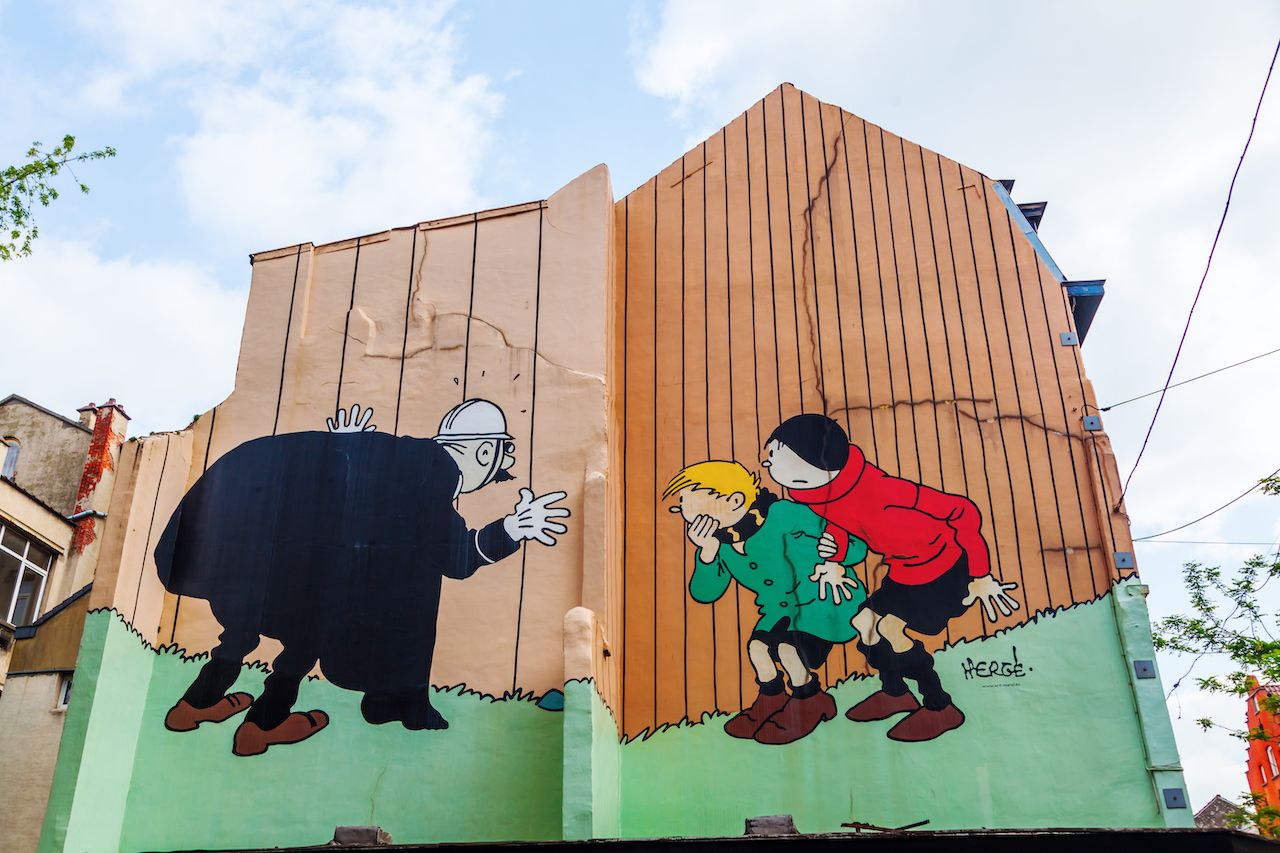 Belgian and other European comic strip illustrators have made their home within Belgium, and Brussels is the place where this Ninth Art becomes the centerpiece within museums and galleries, along walls and on the sides of buildings. A comic strip mural tour offers a route to check out outdoor murals featuring native Belgian designs — from The Smurfs by Peyo to Hergè’s Tin Tin to Lucky Luke by Morris. Pick up maps for the tour at Visit Brussels information desks.

The Belgian Comic Strip Center, a two-level Art Nouveau building designed by Horta, delves into the history of the comic strip but also highlights works by native and noted creators. Fans of the Smurfs will delight in viewing the story behind these small blue creatures and their appearance in print, a TV cartoon, and movies. Then each September, Brussels celebrates this artistic connection through its Comic Strip Festival.