Dr. Ruth is worried about you.

In her new, fourth edition of Sex for Dummies, the world’s most renowned sex therapist, Dr. Ruth Westheimer, has devoted an entire chapter to the overwhelming loneliness of millennials. And she is out to show them all how to end it.

“We have to sound a warning,” she says. “I’m worried about the loneliness of young people, I’m worried they are not developing long term relationships. And I believe planning a short vacation can help cement their relationships.”

To further her cause, she’s partnered with discount travel mavens Hotwire.com to help promote the idea of a “quickie” — short vacations a couple, either new or established, can take to make their relationship better and stave off loneliness. We chatted with Dr. Ruth, and she explained why these types of trips are so important, and gave free advice on how to make the most of them.

Short vacations are essential to solidifying a relationship.

There’s nothing groundbreaking in saying getting away with your significant other brings you closer together. But young couples typically don’t have the time or money to jet off and explore Madagascar. Dr. Ruth says oftentimes when people can’t plan a big trip, they opt not to plan trips at all, and that does no one any good.

“I’m not saying short is better versus long,” she says. “Maybe in a couple years you can go to another country. But it’s not instead of world travel, if you can have a vacation in between in order to cement the relationship you are now in, that’s something you should do. It shows you are in it for a long-term, and not just a fling.”

To back her up, Hotwire commissioned some research that found half of Americans who took a two-to-three-day trip felt an improved sense of well-being afterwards. And a third felt a stronger bond with their partner.

The act of planning shows you care.

Though planning a quick getaway isn’t exactly an altruistic gesture, Dr. Ruth says simply taking the time to book a trip shows your partner you care about them and their happiness. The process of selecting a destination, a hotel, and maybe even some activities demonstrates you’re putting effort into a relationship, and that you don’t want things to get stale.

“It says to someone, ‘Look, I am so interested in you, I went [online], I found a mystery program that gives us a hotel at a very reasonable rate, so let’s go,” she says. “It shows you want to put time and effort into a relationship, I think it’s a win-win for everyone.”

Dr. Ruth even suggests surprising your partner with a quickie getaway to put an instant smile on their face. You’ll demonstrate you’re thinking of the other person’s pleasure, which bodes well for… other activities.

Short vacations allow you to pay more attention to each other.

We’d all love to say we’re going to go off the grid for two weeks with our partner, ignoring emails and the office to enjoy extended, coupled-up bliss. But who aside from two unemployed people with no extended family can stay off their phone and email for two weeks? Literally, no one.

That said, taking three days and cutting out of life is a much more realistic expectation. And with only a short time deprived of constant contact, couples have a better chance of putting their phones down and devoting themselves to each other.

“On a short vacation, people don’t have to tell their boss they’re going away for four weeks,” Dr. Ruth says. “That might not be possible in today’s world. But it’s nice to be able to say, ‘For three days, I’m going to be yours and I’m going to be listening to you, and I’m going to be reflecting on what you say.’ I think that has something to do with good sex.”

Having sex right away makes for a more relaxed vacation. 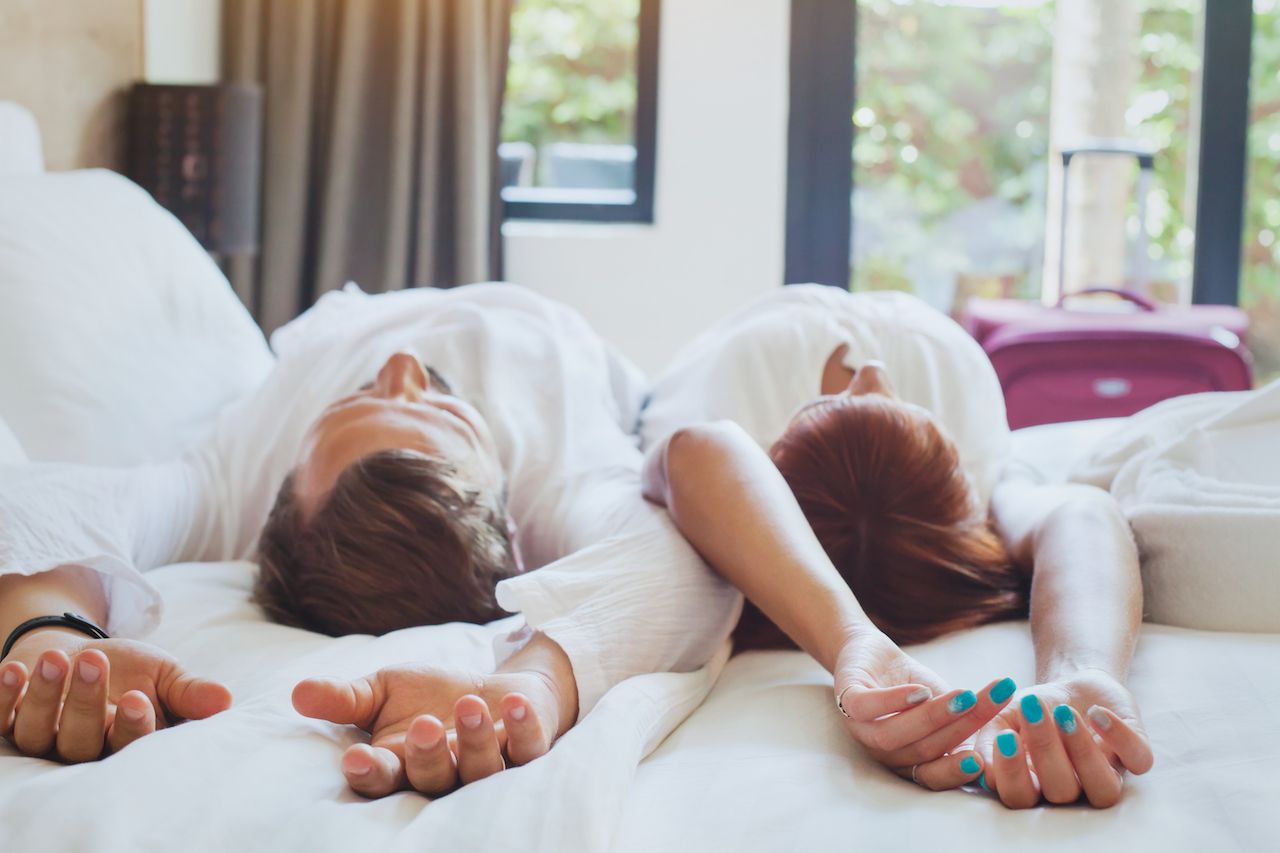 There is something inherently sexy about a hotel room, about that moment when you first open the door and see the perfectly made bed and imagine destroying it with your significant other. Dr. Ruth says there’s no need to wait until after dinner to break in your temporary home.

“Have a quickie experience in that reasonable hotel room right away,” she advises. “Enjoy that, then go out to an expensive dinner with the money you saved on the hotel. After you’ve had that quickie, when you have dinner you won’t constantly be thinking, ‘Will I get sex, or will I not get sex?”

Because you are more relaxed at dinner, you’re likely to listen more. Which then makes for better sex once dinner is over.

Leave the phone away.

Nobody is going to argue that being on your phones during a couples’ vacation is good for a relationship. But because the trip is so short, Dr. Ruth stresses it’s especially important to pledge to disconnect, and stick to your promises.

“I know you have to have a phone, you can’t think about not having one,” she says. “But know when to use it, and when to put your attention into that other person. When you have dinner, when you are in the car, anytime you might be able to have a conversation, leave the phone away.”

Dr. Ruth lamented the loss of the art of conversation and said phones shut the other person out, effectively telling them you’re not interested in what they have to say and only in what’s on your screen.

“I don’t want to see more loneliness,” she says. “And more isolation, not knowing what to talk about.”

Of course, because many millennials have grown up with primarily on-screen communication, cultivating an extended conversation with their significant others can be a challenge. Especially for three days. Facing 72 hours of face-to-face contact with no digital assistance can be a downright terrifying prospect to some people. So Dr. Ruth offered up some pointers on how to have meaningful chats.

“Think about a topic that would be of interest to the other person, something they are passionate about or want to share,” she says. “Even if it’s about the turning leaves, or that it’s autumn and it’s beautiful. Anything that opens up and doesn’t shut the other person out.”

Have a longer encounter later in the night.

Even though you’ve already had that in-room quickie to break the ice, Dr. Ruth says it’s equally important to end the night with a long sexual encounter, where you take all the tension that’s built up listening to each other over your fancy dinner and let it out in an extended, adventurous romp. After all, Hotwire’s survey found 86 percent of millennials would be willing to try something a little more freaky with a partner on vacation, and you don’t need to go halfway around the world to do it.

“That moment of surprise where you find out where you’re going, then showing you are really interested in the other person’s satisfaction, that will translate to being a better lover,” she says. “And having better orgasms!”

CouplesThe Best Vacation Spots for Sexually Daring Couples
Tagged
Couples
What did you think of this story?
Meh
Good
Awesome