America’s version of “Christmas markets” seem to either be heavily decorated department stores or amusement parks that replace Santa with slightly sketchy carnies. That’s why to really get the mulled-wine and gingerbread feel of Christmas, you need to cross the pond and visit the centuries-old Christmas markets of Europe.

This, of course, is not exactly as easy as strolling down to the mall and enjoying the nativity scene outside Hot Topic, so if you’re making the big production to fly all that way, you should probably hit more than one. And fortunately, there is no shortage of scenic river cruises, romantic train rides, and adventurous tours waiting to take you there. Here are seven tours that will bring you through the best Christmas markets in Europe, as well as plenty of other world-class cultural locales.

1. AmaWaterways Christmas on the Danube 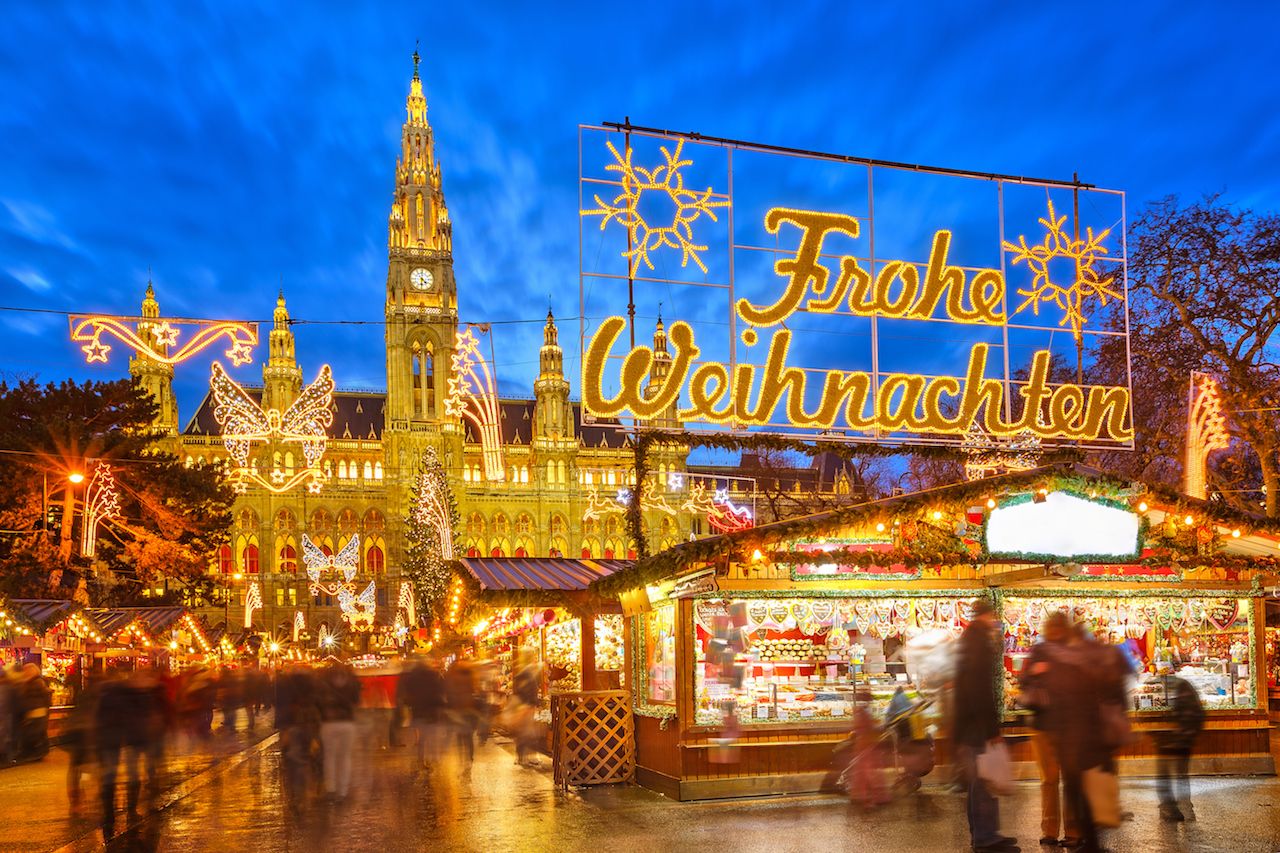 River cruising might be the most stress-free way of seeing multiple Christmas markets in Central Europe. And a trip on the AmaMagna — double the width of most traditional river cruise ships — will have you doing it with more suite space than anyone else. Not that you’ll be spending a whole lot of time in your cabin anyway. This trip has stops in eight different ports, highlighted by the classic Christmas markets in Vienna, Budapest, and Salzburg.

Beyond strolling the bright lights and cinnamon smells, you’ll also get to enjoy a private food tour of Bratislava, as well as bike tours in Passau, Melk, and Alte Danou near Vienna. You’ll also have the option to hike to the famous Bratislava Castle and attend an exclusive Oktoberfest celebration in Vilshofen. Yes, it’s December, but when will you ever have another opportunity to hoist steins during the holidays and not be labeled as “that” relative? 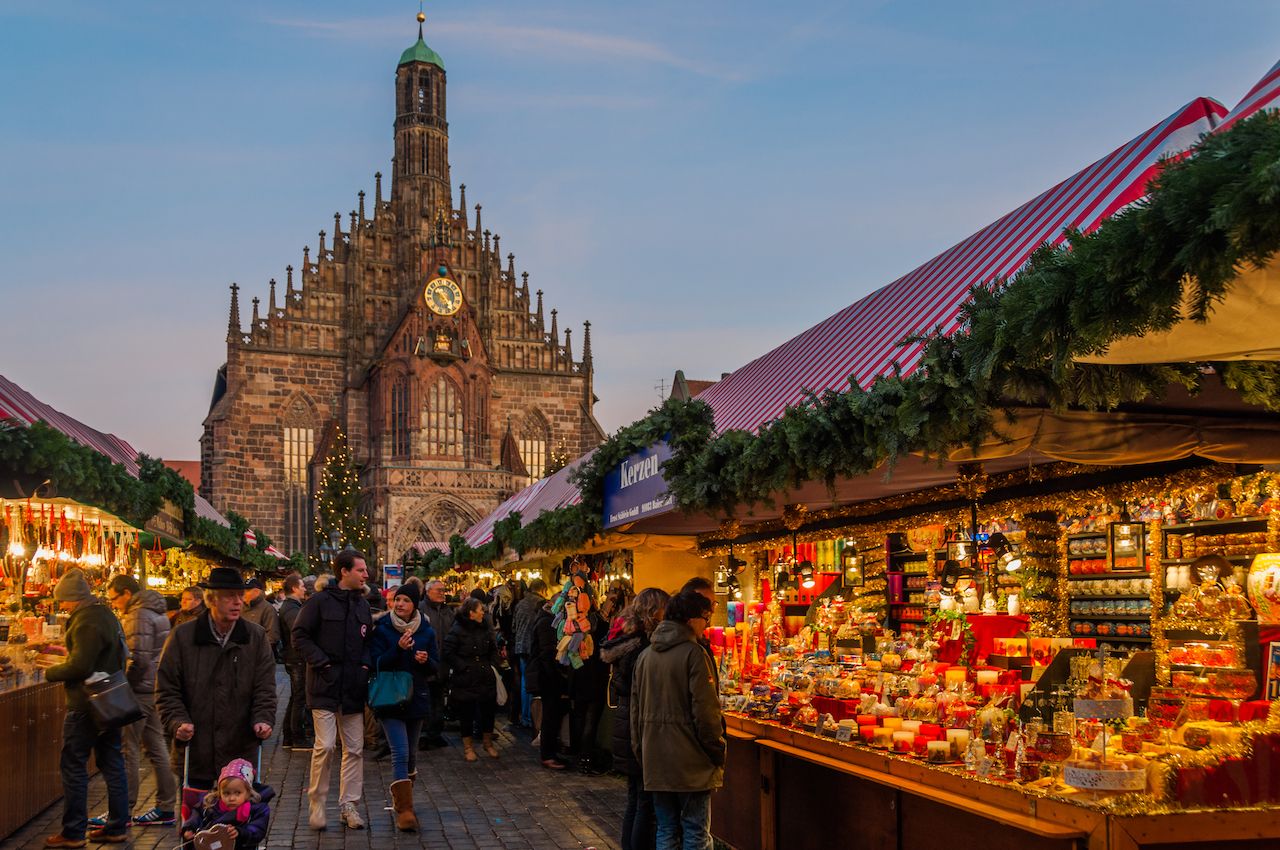 It doesn’t get much more classically winter than a five-day train trip through the snow-covered hills of Bavaria, stopping at some of the world’s most beautiful Christmas markets along the way. This Vacations By Rail tour begins with Germany’s most renowned market in Nuremberg, where your first night is at Christkindlmarkt in Old Town. You’ll spend a full day in Nurmberg, where you can also explore medieval structures like the Kaiserburg Fortress and the walls that once guarded the city.

Day three is a scenic train ride through the Bavarian countryside to the UNESCO World Heritage Site of Regensburg. Though the city has three Christmas markets, you’ll definitely want to spend some time in St. Peters’ Church, a gothic monument that took 600 years to build. Your fourth and final full day is in Rothenburg ob der Tauber, home to the legendary Christmas Shop, and its 30,000 Christmas decorations. Then it’s all aboard a glowing train back to Nuremberg and a farewell dinner at the Maritim Hotel. 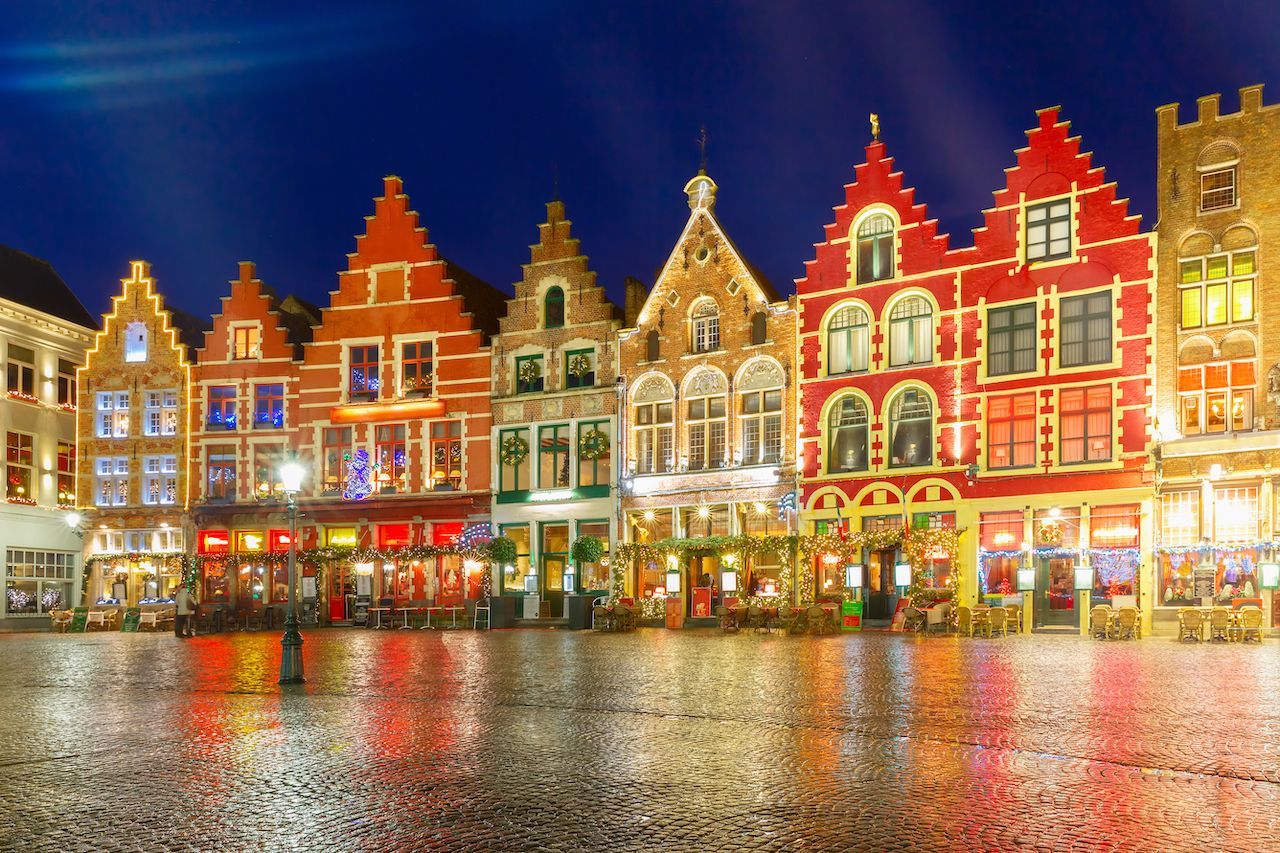 Colin Ferrell and Brenden Gleason probably wouldn’t have been so pained had they been stuck in Bruges during the holidays, when one of the more under-appreciated cities in Europe lights up with unparalleled Christmas market excitement. Most European tours somehow glance over this medieval city, but its markets are just as dazzling and fragrant as anywhere. This tour starts in London and makes the quick trip across the English channel to Bruges, where you’ll start off with a walking tour of the city. Then you’ll have two days to get your fill of mulled wine before venturing out to Brussels on day three.

Your day trip to the Belgian capital includes a walking tour of the city and ample chances to stuff yourself with fries and waffles. Then it’s back to Bruges for your final night in the markets before heading back to London the next day. Though the trip is brief, at $395 it’s the most affordable tour on the list and an ideal continental offshoot if you’re planning on London during the holidays. 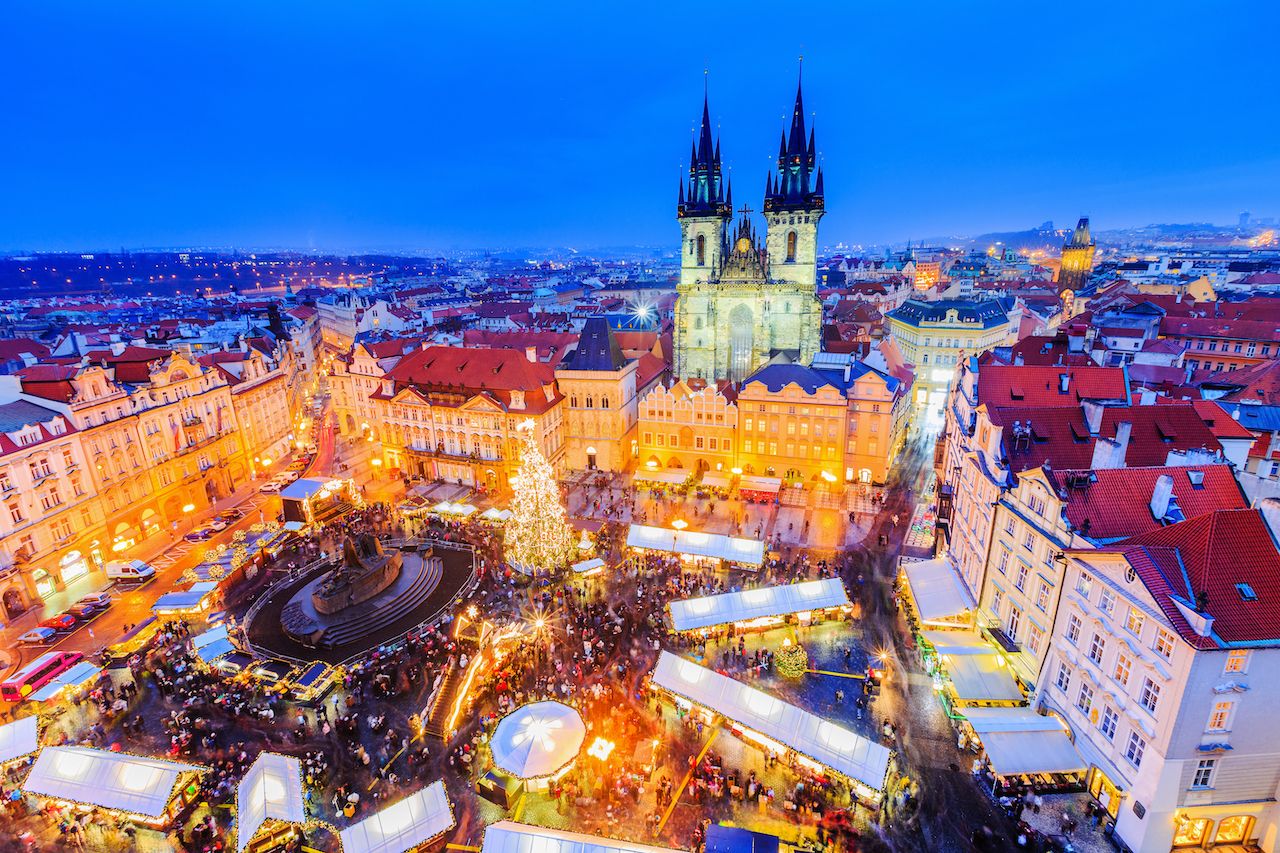 Whereas many Christmas market tours play the hits and take you to the biggest and brightest markets on the continent, this trip from Classic Journeys delves a little deeper into the historic small villages of the Czech Republic. After an opening day in Prague, where you’ll stroll one of the grandest Christmas markets in the world, you’ll then venture to the tiny town of Cesky Krumlov. During your two days here you’ll be immersed in the immaculately preserved old world, visiting a local brewery and markets both here and in neighboring Ceske Budweiss.

After that, it’s off for two days in Vienna, including a private tour of Schonbrunn and the 22-room apartments occupied by Emperor Franz Josef and his wife Sisi. In front of the palace, you’ll find the sprawling Christmas market, with 60 stalls of crafts, mulled wine, and traditional Austrian food. Your final two days are spent in Budapestf, where you’ll arrive early in the morning and walk the Danube from the Royal Palace to the largest synagogue in Europe. The day concludes with a trip to the Christmas market, which you’re welcome to revisit on your final morning as well. 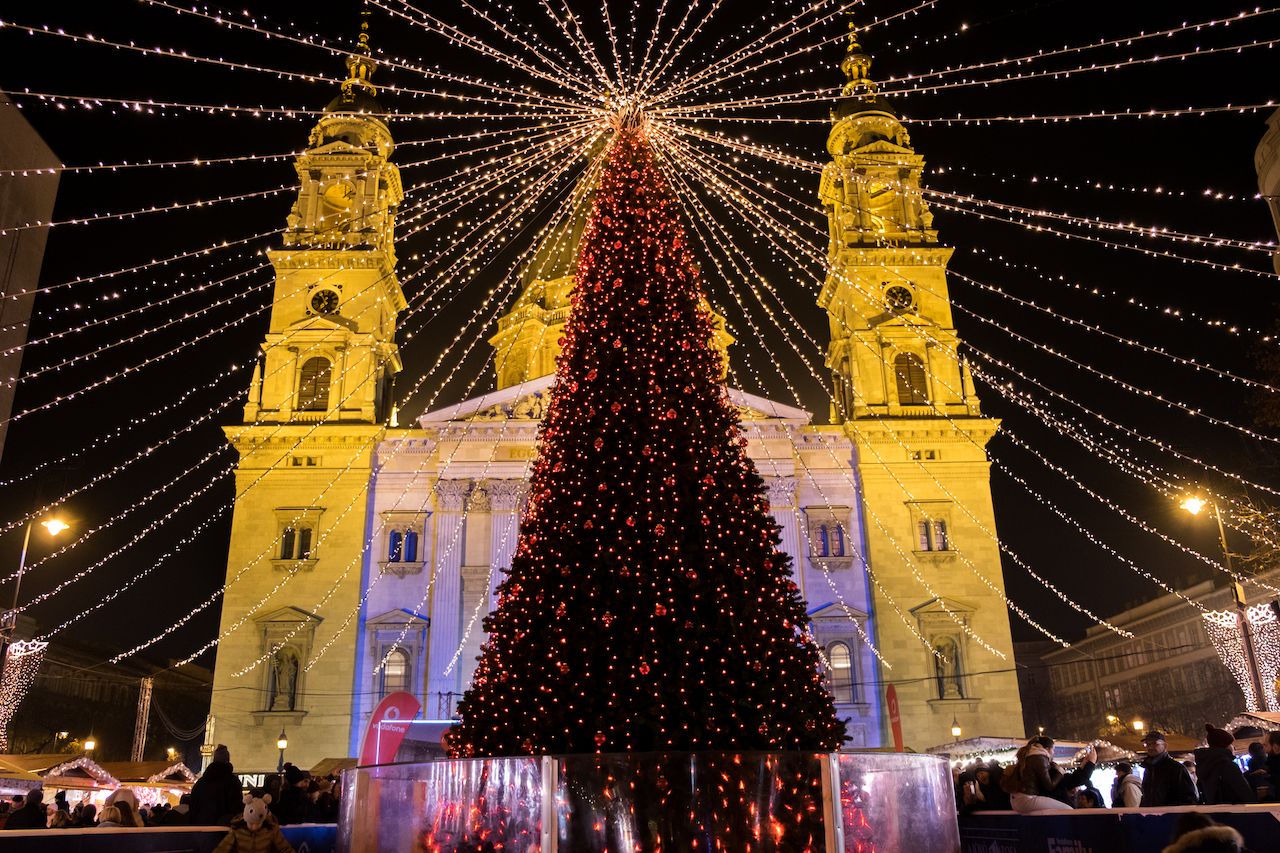 Just because Christmas is over doesn’t mean the markets have to be. And Vacations By Rail’s nine-day trip through four countries and seven cities not only includes Europe’s finest Christmas markets, but it also has you ringing in the new year at one of the continent’s largest parties. Your journey begins with a couple of nights at the Four Seasons in Budapest, where you’ll get a city tour and a chance to explore the Christmas markets during their final days. Then you’ll step aboard the luxurious Golden Eagle Danube Express for a snow-dusted train ride through Balaton Uplands National Park.

The Golden Eagle rumbles through the Austrian alps among some spectacular mountain scenery, going through the picturesque village of Keszthely before arriving in Vienna on New Year’s Eve. You’ll ring in 2020 at a grand gala in City Hall, featuring a performance from Wiener Hofball Orchestra before fireworks from the hall’s balcony. After spending New Year’s Day in Vienna, the train makes a stop in the UNESCO historic site of Cesky Krumlov before continuing on to Prague and the seldom-visited Czech gem of Kosice, before finishing back in Budapest with one more night at the Four Seasons. 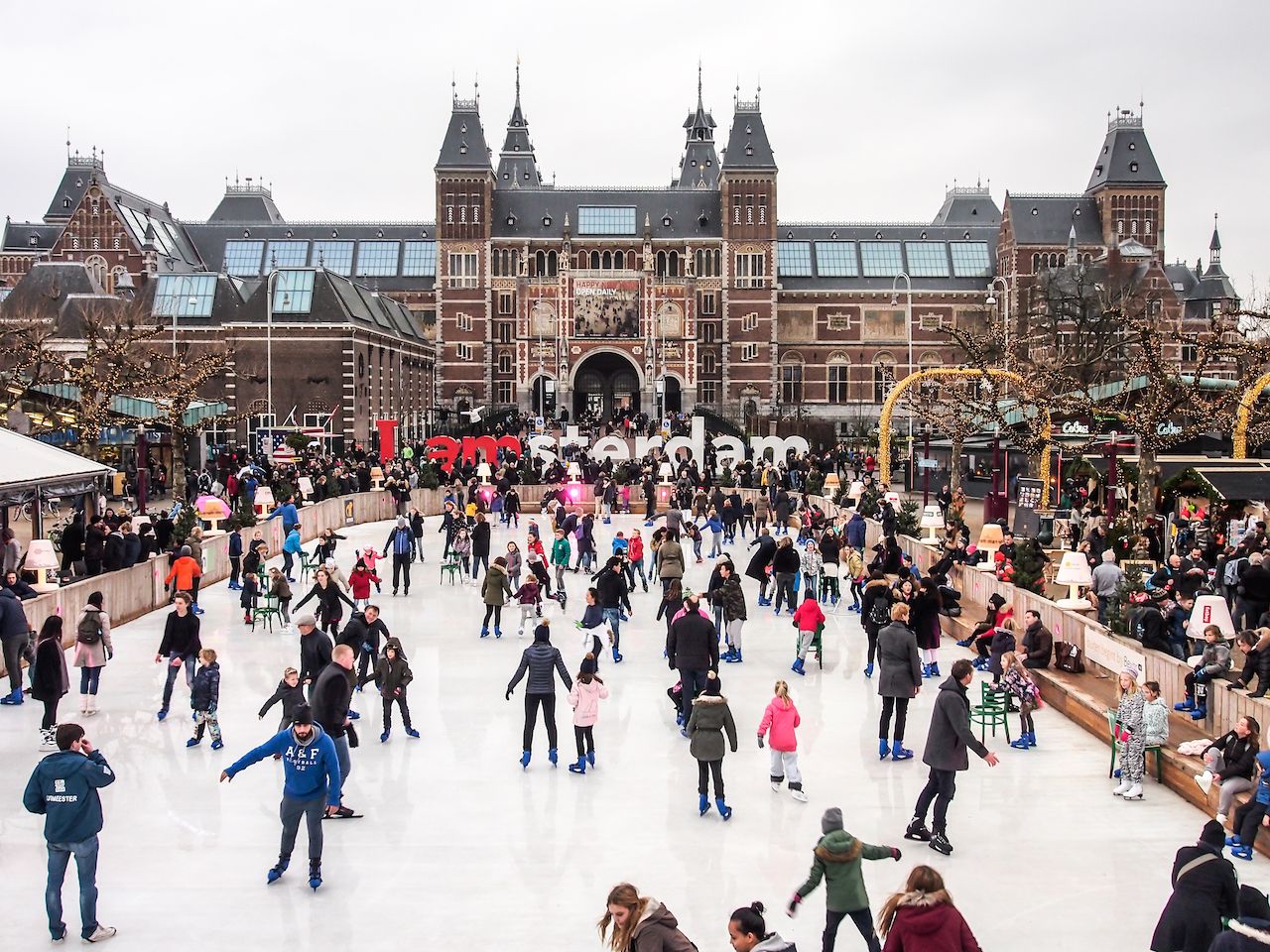 With most of the Christmas market attention lavished on Central and Eastern Europe, people often forget the cities up north go just as big. This 11-day journey takes you from Amsterdam to Stockholm, allowing you the opportunity to visit these cities sans the summer crowds while checking out their spectacular Christmas displays.

The trip begins in Amsterdam, where you’ll hit Dam Square and the Van Gogh Museum before heading to the Winter Village in Amstelveen, one of the most impressive holiday installations in the world. After a free day in Amsterdam, you’ll head to Hamburg and visit the Christmas markets there before moving on to Copenhagen. There you’ll bask in the holiday lights of Tivoli Gardens, which might outdo Disneyland for amusement park Christmas decorations. From there it’s a short flight to Stockholm, where you’ll peruse the city’s multiple markets and make a trip to the Vasa Museum before heading home. 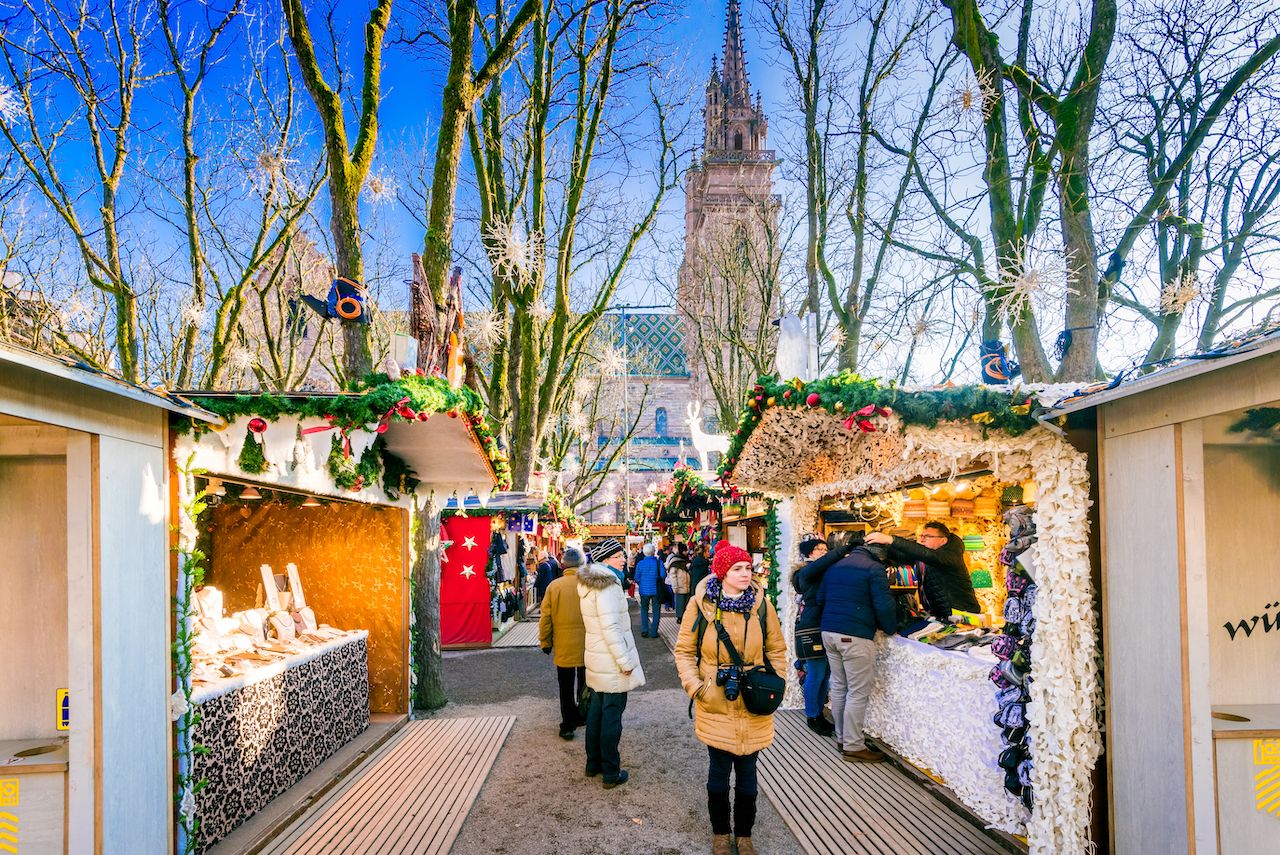 Though the Danube tends to be the big Christmas market river cruise destination, don’t sleep on the Rhine, which runs from Switzerland to the Netherlands through some of the most beautiful cities in Europe. This eight-day adventure begins with the spectacular Christmas sights of Basel, where you’ll gaze in childlike amazement at the 100 trees lining Christmas Street. The next day has you floating into Strasbourg, home to a Rockefeller-worthy Christmas tree and the traditional Christmas cake buche de Noel.

Your fourth day stops in Mannheim, then on to the stately old city in Mainz. From there you can take a side trip to the Christmas markets in Wiesbaden before getting back on the ship for an evening in the lively alley in Rudesheim. Then it’s 40 miles cruising through the cliffside castles along the Upper Middle Rhine Valley, a UNESCO World Heritage site marked by church spires and tiny villages. Your final stop is in Cologne, where you’ll tour the red-roofed stalls of its famous Christmas market on your last evening of vacation.

Pyramids, art, and mole sauce make Puebla much more than a side trip from Mexico City
50 African proverbs that will get you thinking
29 phrases to get you started learning Pidgin English
23 of the most beautiful words in the world
7 wild and weird Nevada attractions that have nothing to do with Las Vegas