April 25, 2015, lives on in the nightmares of those who were on Mt. Everest that day, when a magnitude 7.8 earthquake rattled the Himalayas and ravaged the nation of Nepal. Among those to experience the single deadliest day in the mountain’s living history was mountaineer and author Jim Davidson.

In a new book, Davidson looks back at the terrifying events that he and a team of climbers with International Mountain Guides lived through on their ascent to the world’s tallest peak. The Next Everest: Surviving The Mountain’s Deadliest Day and Finding The Resilience To Climb Again, out now from St. Martin’s Press, details the harrowing events that transpired and his drive to get back to Nepal and stand on the peak he’s dreamed of for more than three decades.

“‘Should I go back to Nepal?’” Davidson tells us he asked himself in the earthquake’s long and painful aftermath. “‘Should I never even go climbing again?’”

Nepal hadn’t seen an earthquake of that magnitude in 81 years. Nearly 9,000 people died in Nepal, with scores more injured and devastation rocking the nation from the capital city, Kathmandu, to the countryside. The earthquake was equally tragic in the high country.

On that day, the earth underneath the world’s tallest mountain range shifted, scraped, and resettled, triggering a series of massive avalanches in the Upper Kumbu Valley along the route used by climbers to summit Everest from the Nepali side. One avalanche tumbled down the side of Pumori, a 23,494-foot behemoth of a peak that overlooks the basecamp used by the IMG climbing expedition that year.

The camp was destroyed, overrun by ice debris. Other avalanches slid down the West Shoulder, a ridge above the Khumbu Icefall that stands at around 23,000 feet between basecamp and Camp One. Davidson and his team were trapped at nearly 20,000 feet, unable to reach higher ground or descend to safety.

For two days, Davidson and his team huddled in and around their tents, waiting for rescue. Passage in or out was impossible, even with a fully equipped mountaineering unit. By the time the plumes and ice of the Gorkha earthquake had settled and the crew was finally rescued via helicopter, 19 climbers had lost their lives. 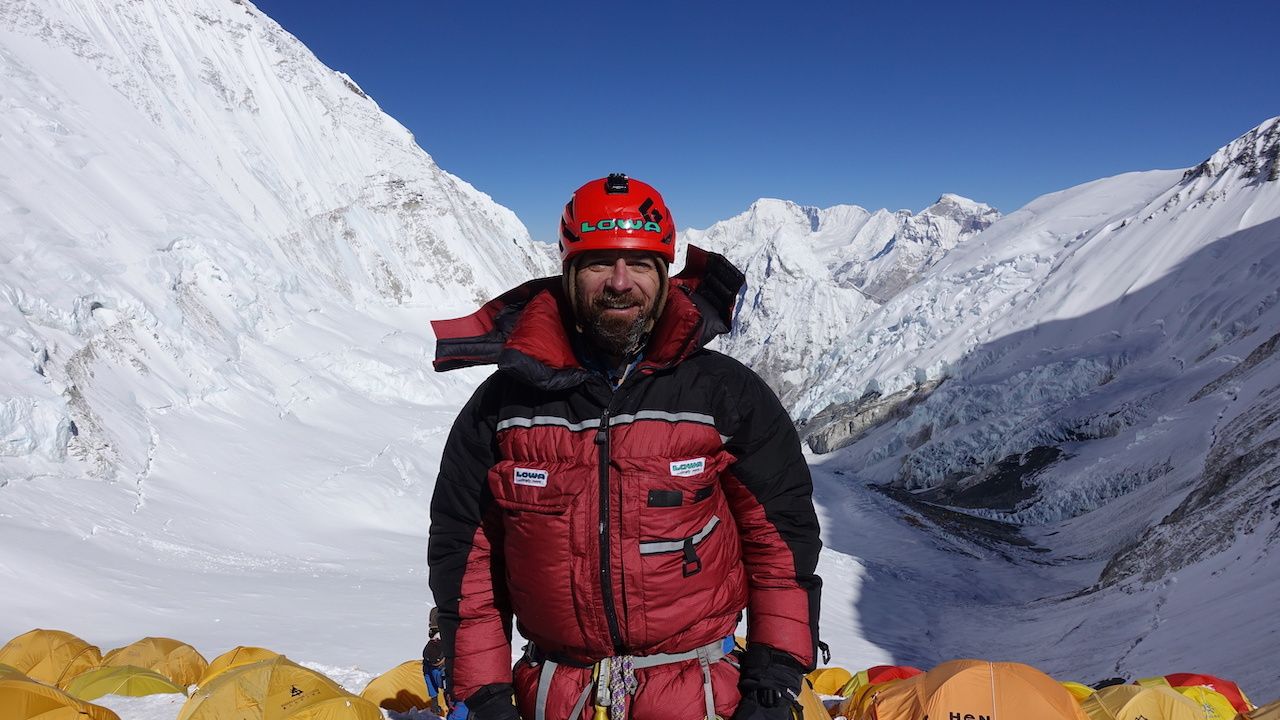 Davidson spent two years putting his experiences into words. The book is at once an inspiring narrative of triumph over trauma and a spiritual guide for how to accomplish such a thing. He recounts the experiences and how he sought to help Nepal, both through volunteer efforts on the ground and through fundraising initiatives back home in Colorado.

Along the way, the author addresses common rumors surrounding Everest, including the presence of trash and bodies on the mountain (not as bad as it’s made out to be), how the Nepalese government is handling over-tourism (not well), and whether or not anyone with the financial means can show up and summit Everest (they can try, but most won’t succeed).

“I wanted to show the non-climber what it was like to climb Everest now,” Davidson says. “I wanted it to be a visceral experience — I needed to bring to life all those sensations of cold and fear and avalanche risk.”

There was nobody better to tell the tale. Davidson has spent over 30 years climbing peaks around the world after being turned onto wilderness excursions as a teenager. Much of his climbing is done in the high alpine, where avalanche risk is a constant threat.

“I was shook up like everyone else that was on the mountain and in Nepal,” Davidson says. “We helped out however we could … This was a major, scary setback for me, and everybody else. It doesn’t mean I should necessarily quit, but I do need to ask myself, ‘If I go back, am I putting myself back into the lion’s mouth?’” 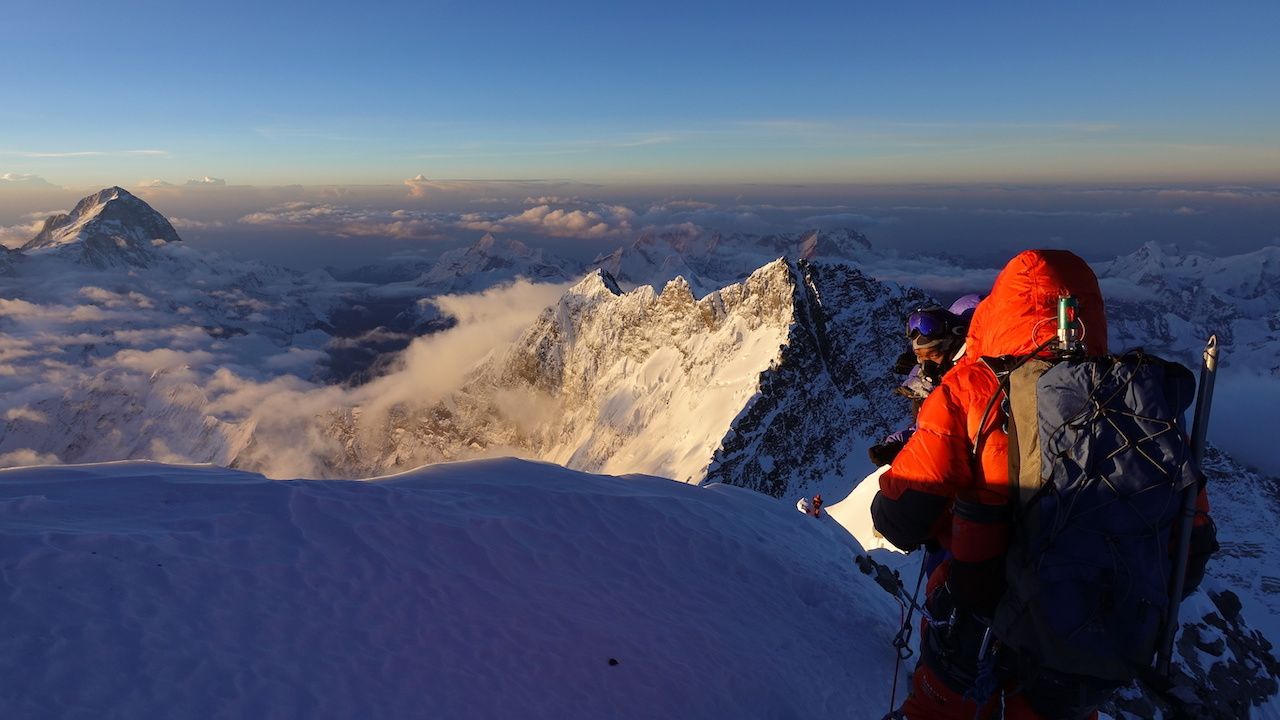 After witnessing such a horrific event firsthand, and having his dream stripped away when he was just days from securing it, Davidson considered quitting climbing for good.

He ultimately decided that overcoming the shock and fear that resulted from his experience was the only path forward. He focused his mental attention on dissecting what happened and how he had reacted, and pivoting that knowledge towards making himself stronger, both mentally and physically.

One lesson Davidson took from the experience is that we are dependent on those around us, often far more than we realize. Climbing is not a team sport in the vein of tennis or baseball, but to be a good climber — and a good friend or relative — is to be someone others can trust with their lives. One Everest summit is the result of groups of people coming together to accomplish something great.

“Try and become a partner that other people would want to climb a big mountain with,” Davidson says, both as advice to aspiring mountaineers and as a mantra to live by. “Figure out all the skills you need. Become highly proficient at some, and reasonably proficient at them all.”

He also put his skills as a geologist to use, analyzing the strain on the plates — which had increased following the 2015 quake — to determine the likelihood of another major earthquake happening while he was there. The odds were low.

“From a traumatic situation, if you think about it long enough you can distill some wisdom, some lessons, some strength, and actually make yourself better equipped to handle something scary down the road,” Davidson says. “That’s what I call ‘post-traumatic growth.’ I didn’t want that thing, I didn’t like that thing, but how can I use that thing to make myself either a better person, a wiser person, or a better teammate.” 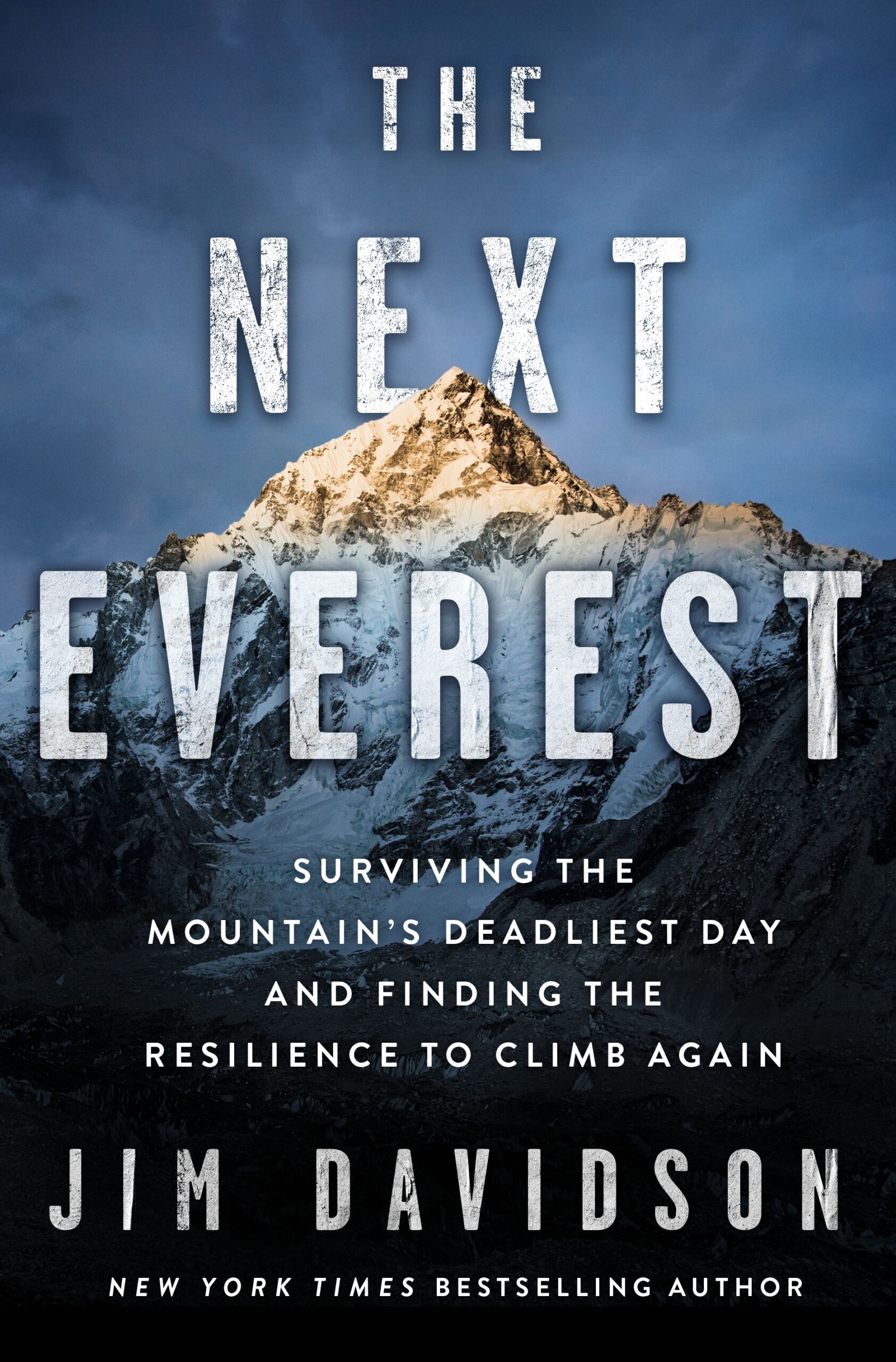 The book’s title is of dual purposes. Davidson returned to Everest in 2017 after the sleepless nights and bouts of trepidation had caved to raw desire. But it is also a metaphor for life and the never-ending, seemingly insurmountable challenges that present themself along the way.

“To my right the rising sun pushed waves of orange and pink ahead of its arrival,” Davidson writes in The Next Everest “To my left the western sky was releasing its gentle grip on nighttime and starlight.

“A deep satisfaction flowed through me. After each step I stopped to stretch out the final minutes of summiting and to savor my dream coming true. I wanted to feel all the joy and experience every second of awe.

“My head rose higher than the final snow mount and I saw over the mountaintop, far into Tibet. After two more gentle strides, at 4:19 a.m., I stopped and embraced PK.”

After 35 years of dreaming, training, and planning, this Everest had been met. Now it’s on to the next one, carrying forth the indelible spirit of the climber.

ClimbingThe 11 Hardest, Most Dangerous Mountains To Climb in the World
Tagged
Books Climbing Nepal
What did you think of this story?
Meh
Good
Awesome