“We are surviving to death.”

This was what one sharp-witted 26-year old girl from Guantanamo tells me over beers in a cafe on Calle Obispo, a lively street near Habana Vieja.

No one’s starving to death on the streets. If you have a bad leg or a bad heart, the doctor’ll fix you right up at zero cost to you. There are beggars, but it’s not uncommon to spot the same person a few blocks away in a suit, clicking away on his smartphone or ordering a coffee at a hotel cafe. Many pull in more money per day than the doctor who treats him, so the girl tells me.

“I think my stork got lazy and dropped me off in the wrong country,” she continues, ordering another Bucanero. “I shouldn’t have been born here.” She’d moved to Havana a year earlier when her heavy metal rocker boyfriend offered to pay for her travels (though he was still married to his wife). Despite speaking near-fluent English, she can’t work without a proper Havana residence permit, so she spends most of her days in their apartment. They rely on the income her boyfriend pulls in from selling tourist trap trinkets in a marketplace a few blocks away. He is one of the lucky ones. With an average income of $5–10 per day, he makes more than the vast majority of people who survived on ~$20 a month at a government job. This includes doctors, lawyers, and bankers — the people who usually pull in the biggest salaries in most other countries. 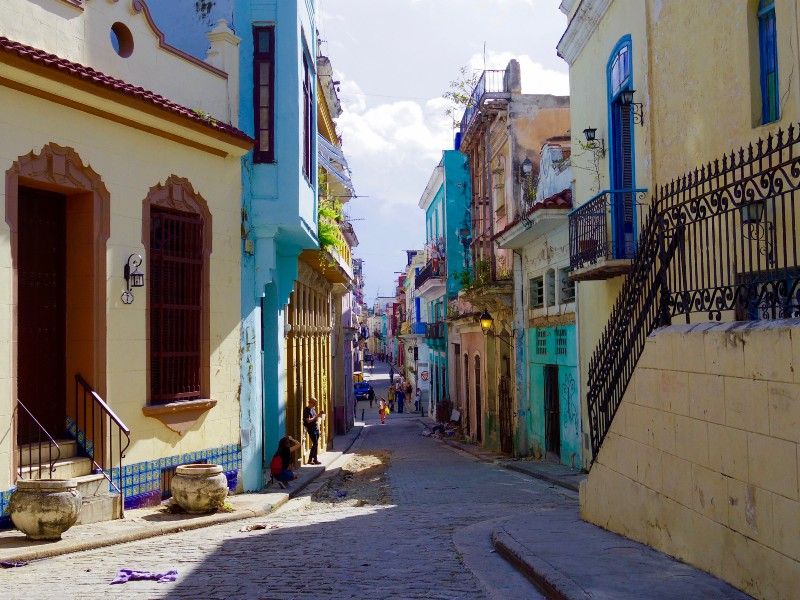 “In America, workers are like this,” one casa particular owner said, making a triangle with his hands. “The people who use their brains are at the top while the people who use their muscles are at the bottom. But here it’s the opposite.” He flipped the triangle upside down so that the apex was now on the bottom. “Here in Cuba, the smartest people make the least money and work the longest hours.” His daughter works as a obstetrician and delivered more than 15 babies the night before. This was a regular day. She makes less than 600pesos per month (~24 USD). Yet he said that “doctor” is still one of the most desired jobs among students. “You save lives. Everyone knows you and everyone respects you,” he said, explaining the conflict between wanting a fulfilling job and longing for a more comfortable life. He had worked as a mining engineer until a series of kidney problems forced him to retire. His days became a cycle of eat, sleep, eat, sleep, interspersed with visits from his daughters. He sat on a plastic stool outside his house, watching people walk by.

He said a visit from President Obama and Brian Chesky, the founder of Airbnb, a year earlier had changed his life.

“We all looked at this young guy who had built his business from scratch and grown his business like crazy in just a few years. Not even 40 years old,” he said, adjusting his Yankees baseball cap. “He said any of us could do it.” With the help of his younger daughter who had picked up some English working as a journalist for a government magazine, he put up his two free rooms on Airbnb and had already started construction on a third floor where he would add another two rooms for rent. He’d made enough money to buy a motorcycle, and he would take his wife on it on weekends to Malecon’s seaside. 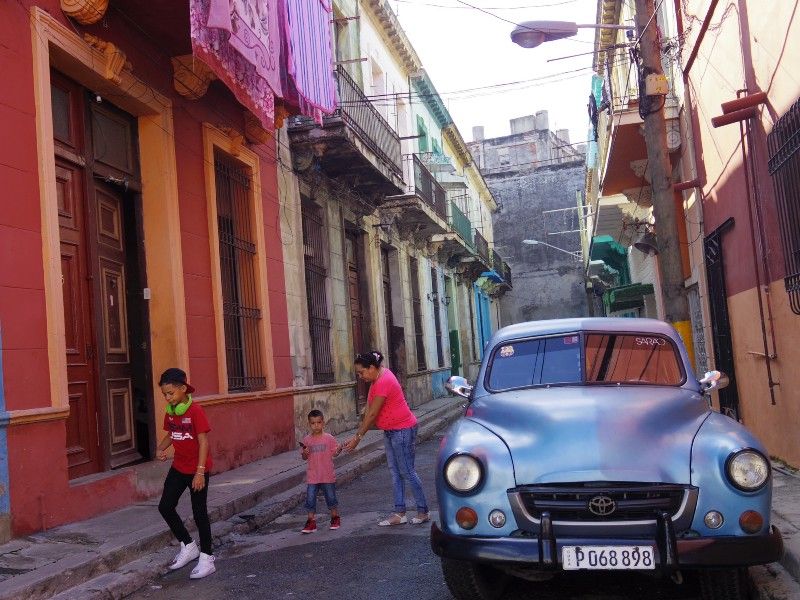 For many Cubans, tourism has become the primary escape from a low-paying government job and speaking English is often a gateway into new opportunities. Our biking tour guide, a 22-year old girl from Vinales, told us how she had picked up her English purely through binge-watching American TV shows. “I love Supernatural and Arrow,” she said as we passed by El Palenque, a limestone cave that doubled as a nightclub on weekends. Wifi is expensive (at about $2 per hour), so she and most of her friends use “El Paquete Semanal,” a 1TB collection of digital contents containing new episodes of TV shows, films, books, and other customized options that is updated weekly at a cost of about $1 (~30pesos). She’d been recruited as a tour guide by her boyfriend’s cousin after he’d heard her mimicking a line from Family Guy. Each morning, she walked 20 minutes from her house near one of the tobacco farms into town where she would take phone calls from both English and Spanish-speaking tourists. She’d even mastered horseback riding for the group’s most popular foreigner-focused tours. 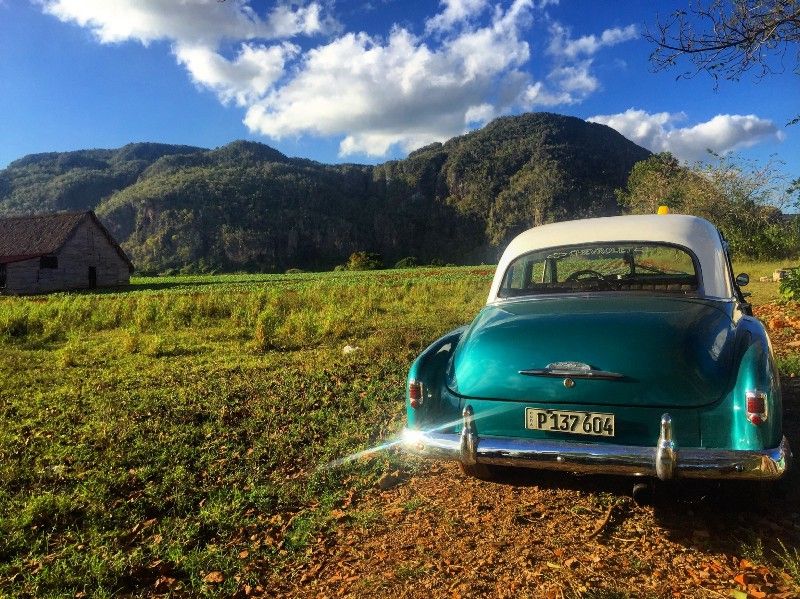 When I asked her boss, another fluent English speaker, how he’d had gotten into the touring business, he said he had actually studied engineering in college but could barely pay his bills as an engineer. He left Havana and returned to his small hometown in Vinales where he found a job at a friend’s tour guide company. After a few years, he bought a few used mountain bikes from some visiting foreigners (since it’s still too difficult and expensive to import new bikes into Cuba) and started his own tour company.

“No one needs a programmer. I haven’t coded anything in years, except to make a website for my tour services,” he said, standing barefoot in a walled-in plot of pebbles and bricks: the foundation to a new house. He’d recently hurt his knees on a biking tour, so he’d switched his attention to building his own casa particular. His father, a farmer, had given him a small plot of land but he had no interest in using it for tobacco. “I like designing things, visualizing and organizing. I made the entire blueprint for this house,” he explained proudly, walking us through where the two bedrooms would be, the space between them to limit sound leakage, the cooled hallway to the kitchen and the seating arrangement for breakfast, all along a skeleton of concrete and bricks already laid into the ground. With limited masons and funds, however, he said it would take nearly 4–5 years to complete. It took him nearly 30 minutes by motorcycle just to get to a wifi hotspot so he could answer email inquiries about his tour services, so it was still difficult to scale his business. 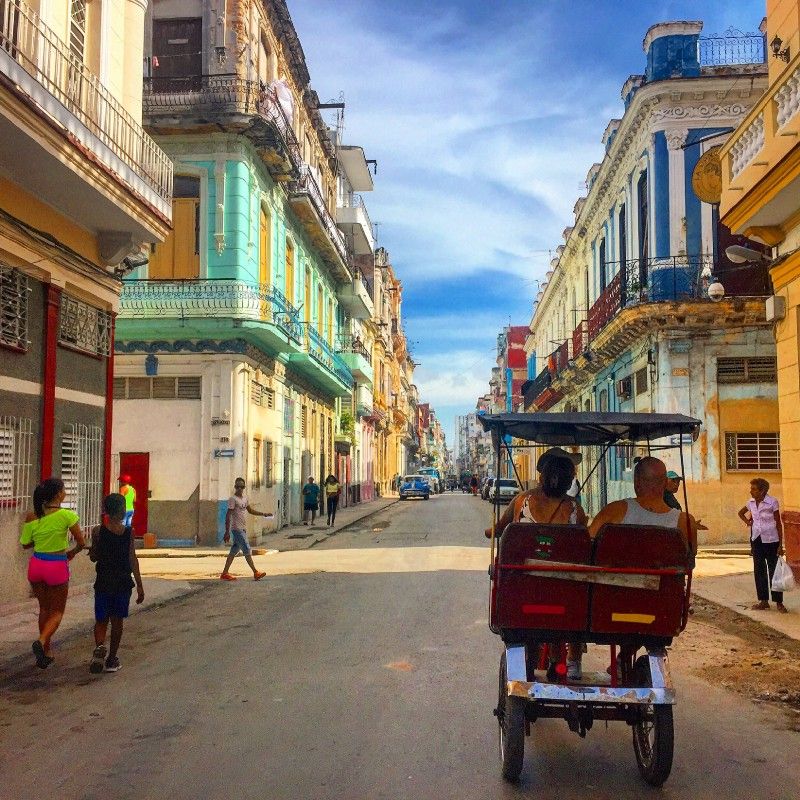 Lack of infrastructure was a problem, but limited food/supplies and a looming sense of stagnation were the more troubling issues for most Cubans.

“Why would anyone work hard? They know it won’t get them anywhere,” the girl from Guantanamo says, lighting up a half-crushed H.Upmann cigarette. The only four things she says people could always get in Cuba were cigarettes, sugar, rum, and coffee, the top exports for the country. “If I want apples and the government’s not selling apples now, even if I have the money to buy, there’s no way I can get an apple.” She says the country still largely relied on imported food and because of the US embargo, their options were always limited. Our casa particular owner in Trinidad told us that finding everyday goods like toilet paper and eggs could take days to find in stores, with most products being used for tourists (e.g. at hotels and casas). She used an iPhone 4 that her daughter had sent her from Slovenia because it was impossible to find (or afford) a working smartphone. She apologized for how her sheets, pillow covers, and blankets were all different colors and sizes because it was impossible to buy a full set, so she bought whatever she could find.

The girl from Guantanamo says she owns only one pair of jeans. They cost her 30cucs (~$30), more than a month’s salary for most government workers. Her shoes were 20cucs (~$20). Almost everything was Made in China. The government-operated shops had limited stock, so she and her friends often relied on street vendors, many of whom traveled to nearby countries like Mexico, Jamaica, and the Dominican Republic to source the latest styles and sold them at a massive mark-up on the black market. She says it’s her dream to own an authentic pair of Manolo or Christian Louboutin shoes. When I ask where she could buy them in Havana, she laughs.

“I don’t even want to think about it. The cost of one pair could feed a whole family for a year.” 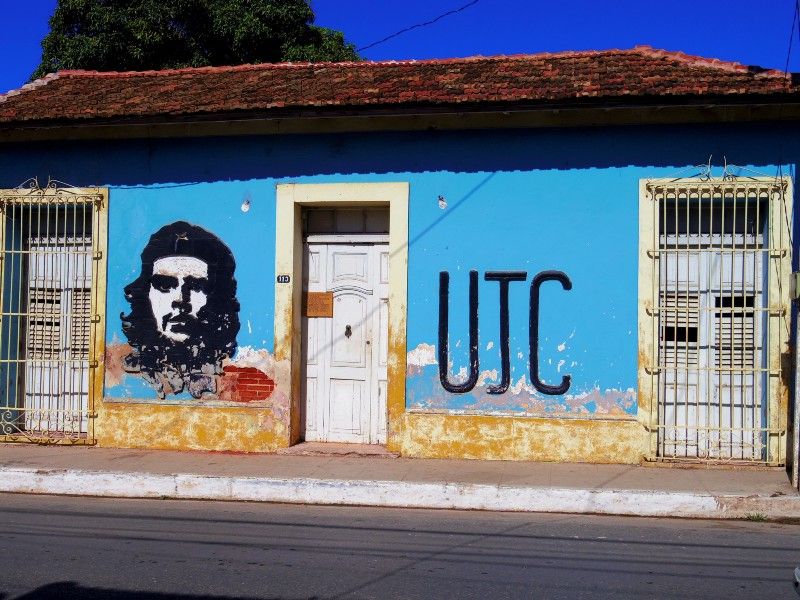 Every Cuban I met was proud of four things in their country: free education, free healthcare, overall safety, and a deep respect for family. The fourth often manifested in an almost feminist mindset that I hadn’t expected.

“I have only a handful of friends,” one Cuban man said. He’d worked for the military for more than fifteen years and despite having earned a college degree in communications, he couldn’t find any non-military job outside of hotel security guard and storage warehouse labor. “One of my best friends, a guy I knew since we were kids. I recently found out he had hit his wife. That was the end of our friendship. I thought, how can you hit the person you love? You’re supposed to treasure her, protect her. I just couldn’t understand it. I couldn’t be friends with someone like that.” 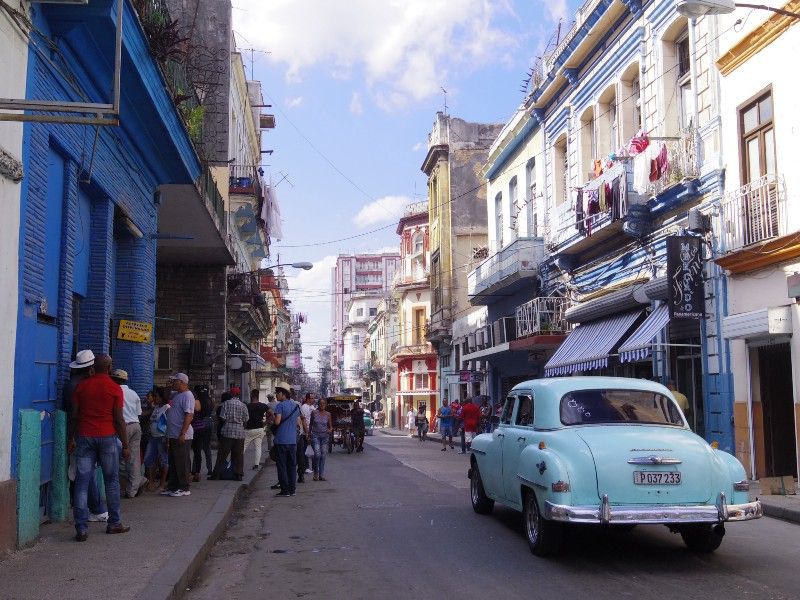 I asked him why so many people in Cuba go to college but almost no one goes on to graduate school. He just shook his head and said with a smirk, “It’s a sad story.”

“What do you mean? I love sad stories,” I joked.

His girlfriend snickered, “Why? Because you can get on a plane tomorrow out of here?”

The owner of our Havana casa particular said that many Cubans still tried to swim their way to the US border, hoping to leverage the Wet Foot, Dry Foot Policy. Much of his wife’s family had immigrated to the US during the 1980 Mariel boatlift, some during the massive 1960s Cuban migration. Everyone we met had family in Miami. Most make trips home every year and bring whatever supplies they can. A new phone, a pair of good earphones, or an eyeliner refill. Anything is better than nothing. My tour guide in Vinales said I could probably find a buyer for any of my old electronics in Cuba. 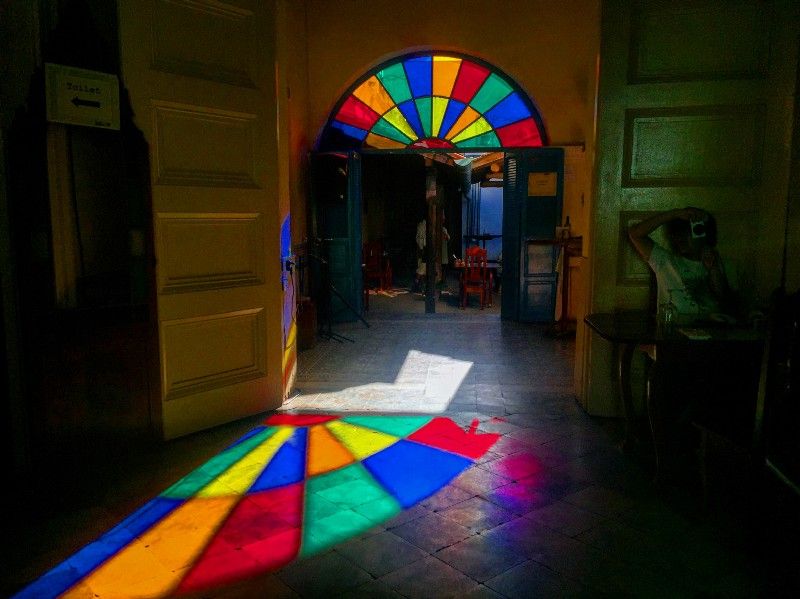 “Do you think things will get better?” I ask the girl from Guantanamo. It’s my last night in Havana, 9 days in and I still have not made sense of the happy-sadness that seems to permeate every person I’ve met.

The cafe has started pulling down its metal shudders so we switch to a small, government-owned bar across the street from Havana’s tiny Chinatown. Several classic American cars, all collective taxis, are lined up on the street, hoping to pick up a few tired stragglers from Centro Habana. The drivers are gathered outside their cars, laughing and arguing baseball. The girl flicks her cigarette stub onto the street. She grins at me like I’ve asked a loaded question.

“We all smile and look happy because we’re hoping, some of us consciously and some unconsciously, that someday, who the fuck knows when, someone will come and save us,” she answers. 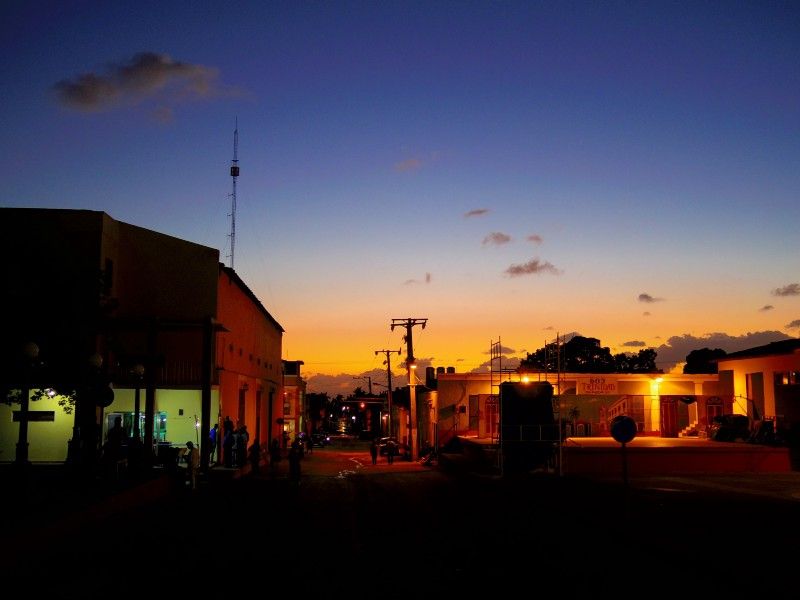 Tagged
Narrative Cuba
What did you think of this story?
Meh
Good
Awesome