Gazing at the yellows of quaking aspen or the deep reds of vine maples until your neck cringes is an autumn rite of passage in the Northeast. But before you hop in the car and head for the hills, remember one thing: It’s tough to enjoy the scenery when you’re the one stuck behind the wheel.

Fortunately, the close proximity of New York and New England’s population centers to its scenic areas, and to the nearby metropolises that feed into them, means that driving isn’t a necessary prerequisite to proper leaf-peeping. The below routes save you the hassle of driving and get you to the region’s leafiest, most colorful spots. All you have to do is sit back and take in the hues.

From Boston to the White Mountains 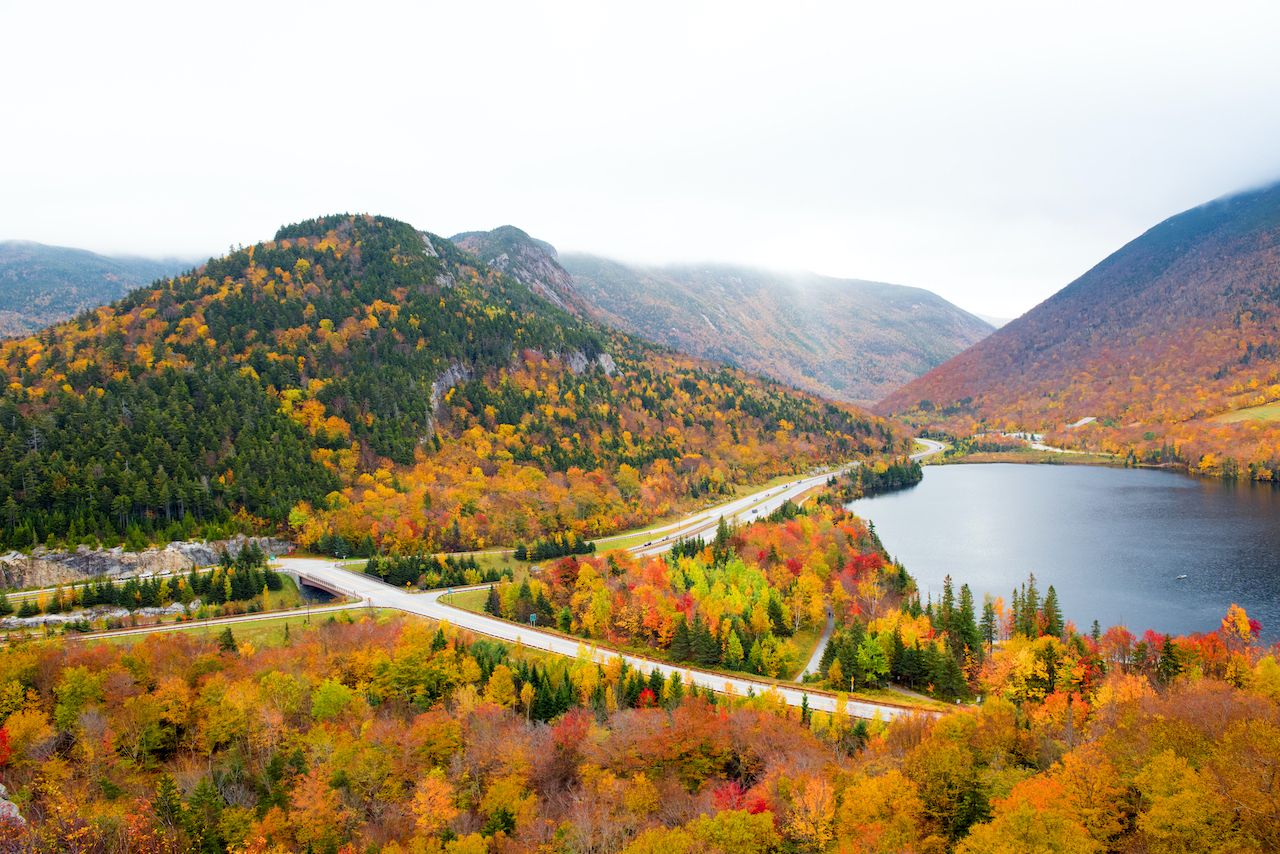 Guided fall-foliage tours are aplenty from Boston, and some make it up to the White Mountains of New Hampshire and back in a single day — without sacrificing the photo stops of longer trips from Northeastern cities further afield.

Viator offers a guided tour from Boston along the scenic Kancamagus Highway through the White Mountains for $125 per person. You’ll stop at a few photo ops along the way to lunch in North Conway. The tour culminates at the legendary Mount Washington Hotel, a National Historic Landmark that’s hosted presidential getaways and the pen-hands of the most prominent Gilded Age writers. Be that as it may, the tour’s highlight remains the burgeoning bands of oranges, yellows, and bronzes that dot the hillsides. 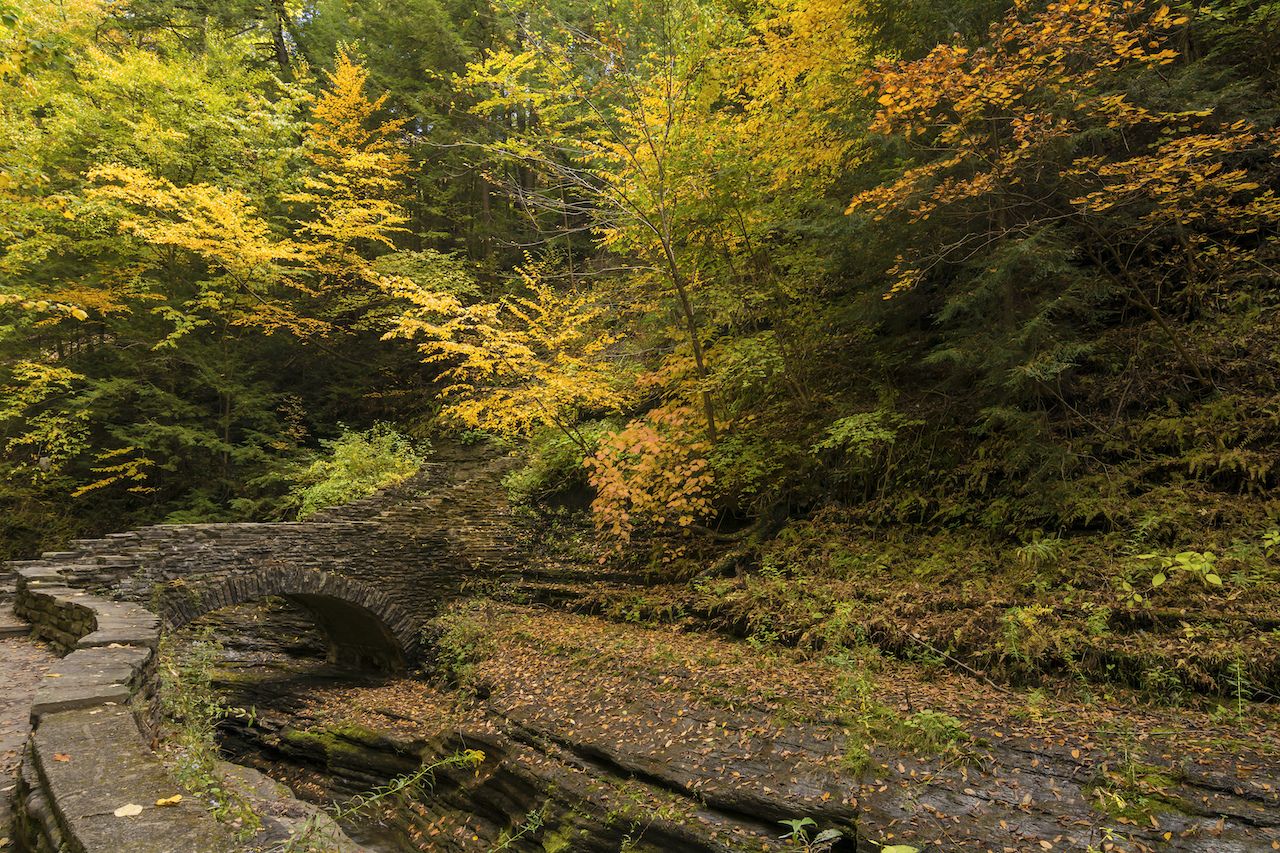 Traveling from New York City to Ithaca, New York, via OurBus costs between $35 and $60 — depending on the day — and takes about 4.5 hours. Getting there from Boston is doable, too, but that still takes you through NYC.

You’ll depart in the morning and arrive in downtown Ithaca by early afternoon. Once there, your itinerary requires just one thing: Watkins Glen State Park. Hike the Gorge Trail and try not to get too distracted by the jaw-dropping scenery surrounding you — or else you might find yourself passed by groups of more focused hikers at best or at worst sliding down a muddy embankment.

If you still have energy left after hiking the trails and staring at the flora for an entire afternoon, the surrounding Finger Lakes region offers plenty of wine and farm-to-table food to please. 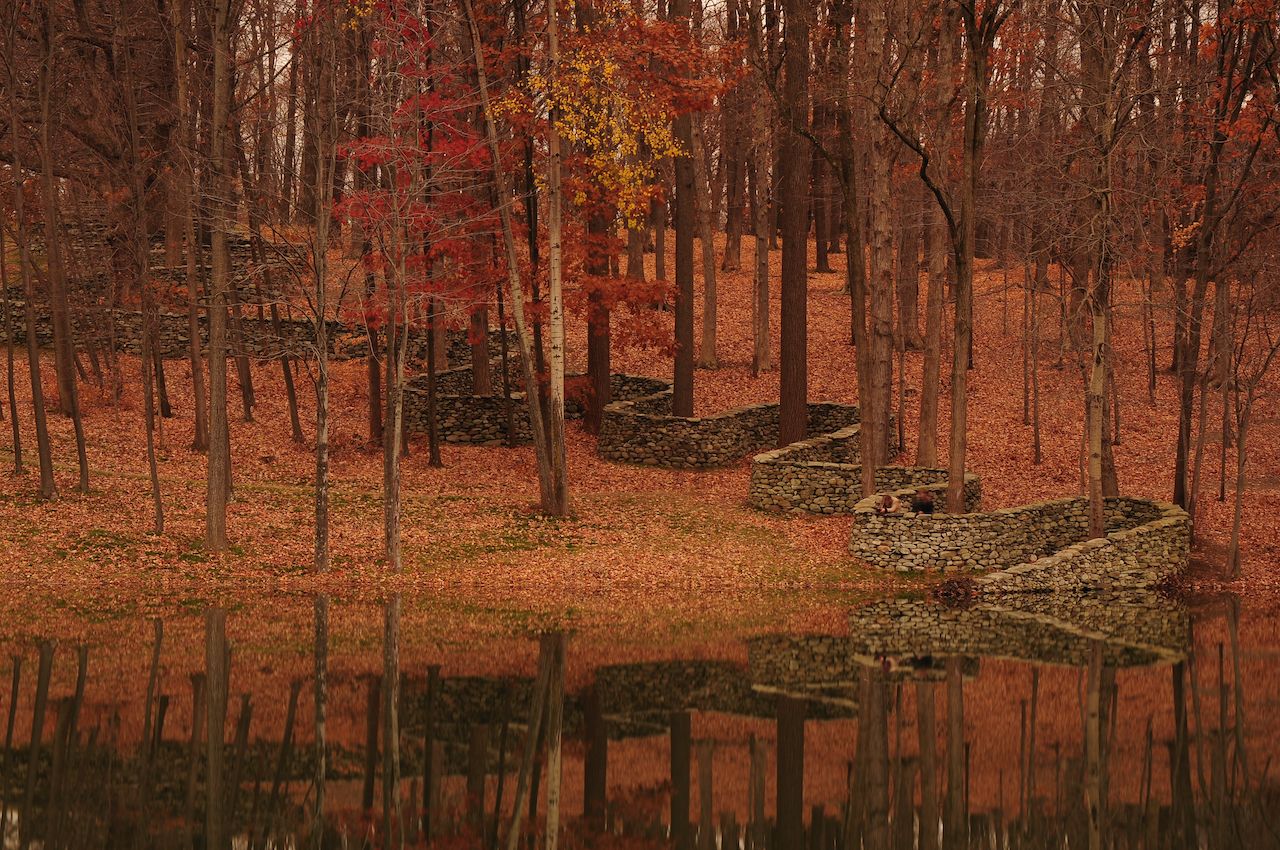 Going all the way to Ithaca and actually enjoying the experience requires an overnight, but it’s certainly not the only leaf-peepin’ option from the Big Apple. CoachUSA sells round-trip bus tickets from New York’s Port Authority Bus Terminal to the outdoor Storm King Art Center, about an hour-and-a-half from the city.

For $48, you’ll get there and back to experience the fall colors in and around the nature center. The foliage is accented by the outdoor art sculptures that line the park, meaning you can actually snap some unique photos that aren’t carbon copies of every fall foliage shot on Instagram. With about 5.5 hours on-site, you’ll be back in the city in time to still grab dinner afterward. 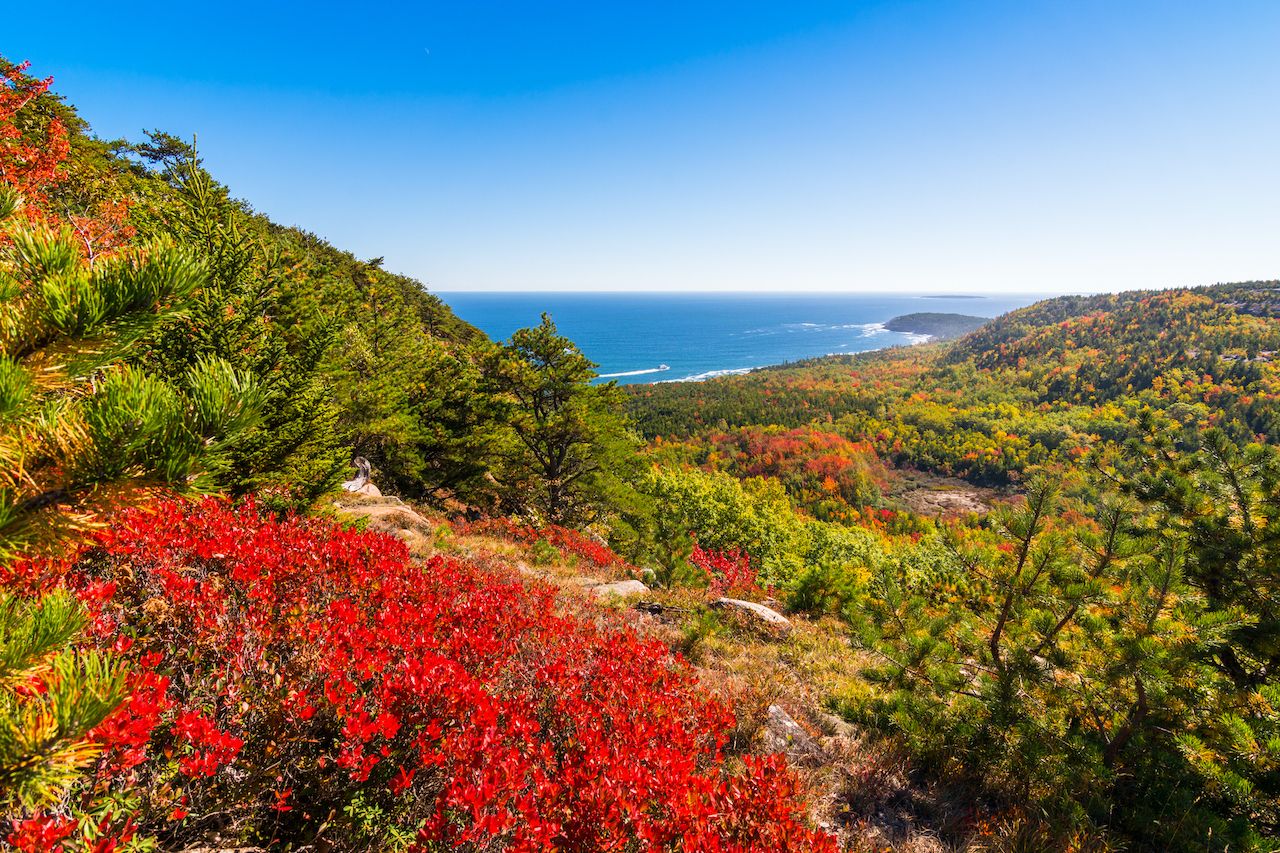 Acadia National Park is a microcosm of everything naturally awesome about New England. As such, the fall colors are striking — and easy to get to from just about anywhere in Maine. With the help of Rome2Rio, you can get from Portland, Maine, to Acadia National Park by bus in about 5.5 hours, and you’ll only have to shell out $30-50 for the journey each way.

Once there, Matador has you covered with everything you need to know about visiting Acadia National Park. The best spots to see the colors in Acadia are from its beaches, where you can stare at the rising hills and Cadillac Mountain at a safe distance from the single-occupancy vehicles clogging up the park’s main thoroughfare.

Multi-day tours across the Northeast 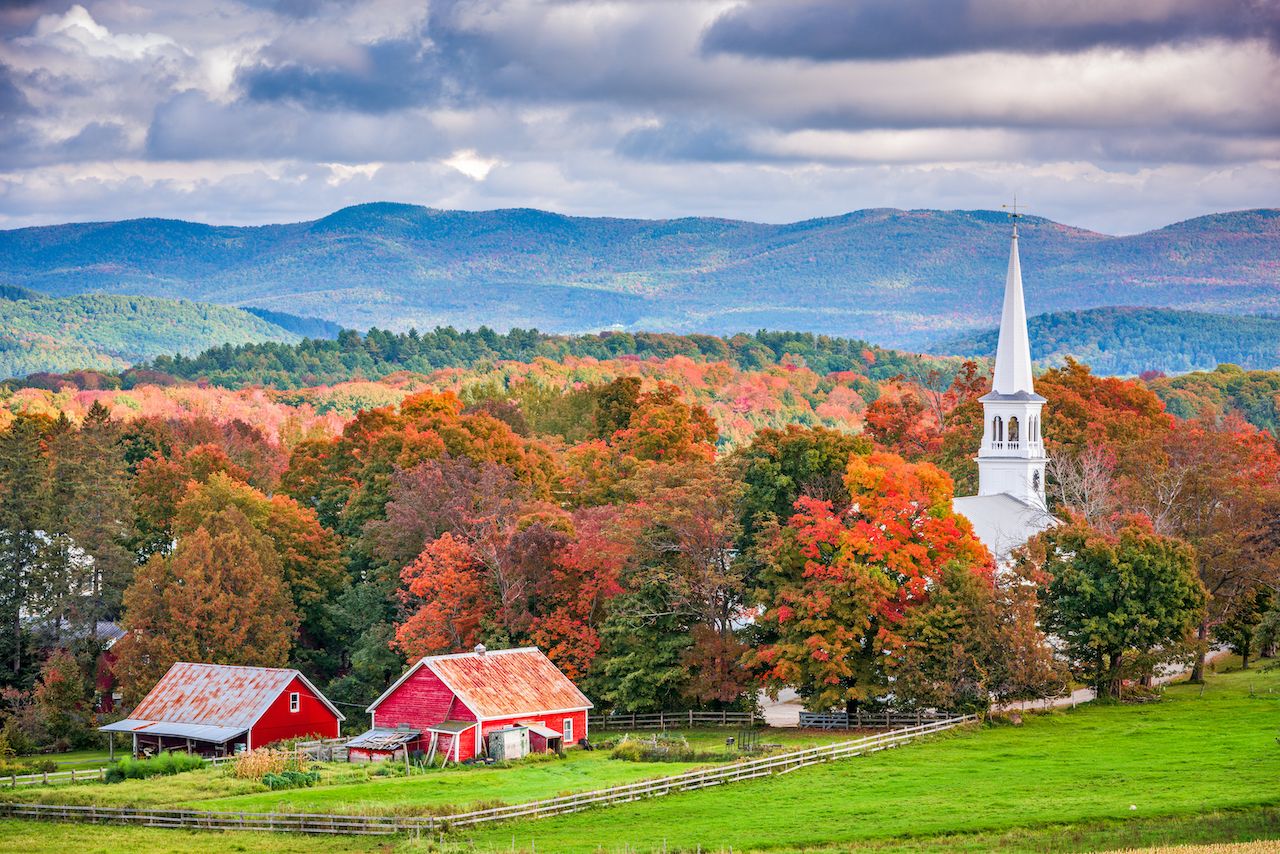 Taking in the entire region requires more than one day. It also necessitates either a knack for trip-planning logistics (see Rome2Rio for help) or a decent budget.

If you have the latter, a number of companies offer eight-day guided excursions departing from cities across the region. Go Ahead Tours departs from Burlington, Vermont, in the direction of Massachusetts, stopping at six leaf-peeping spots along with visits to the Ben & Jerry’s Factory, a cheese factory, and a number of other interesting and delicious excursions. The tour costs about $2,400 per person, but it’s nearly all-inclusive — your hotel rooms, breakfasts, and some dinners (including libations) are covered.

Caravan Tours runs a similar trip departing from Boston, with the bonus of being far cheaper (about $1,400 per person for an eight-day trip). It takes you through all six New England states and even includes a quick jaunt over to Martha’s Vineyard to stare at trees that come with a wetter, better-known backdrop.