Niagara gets a lot of hype, so too does Yosemite, but the US is littered with amazing waterfalls. If there’s only one thing this country knows how to do (and there might be), it’s rack up natural wonders.

You might think you know all the big ones — and you might think the rest are all smushed into the Pacific Northwest — but there are dozens worth knowing about. Some are major state attractions, others a reward for those who bother to make the trek. From Washington to New York, here are the most spectacular US waterfalls to see in the country’s most spectacular season. 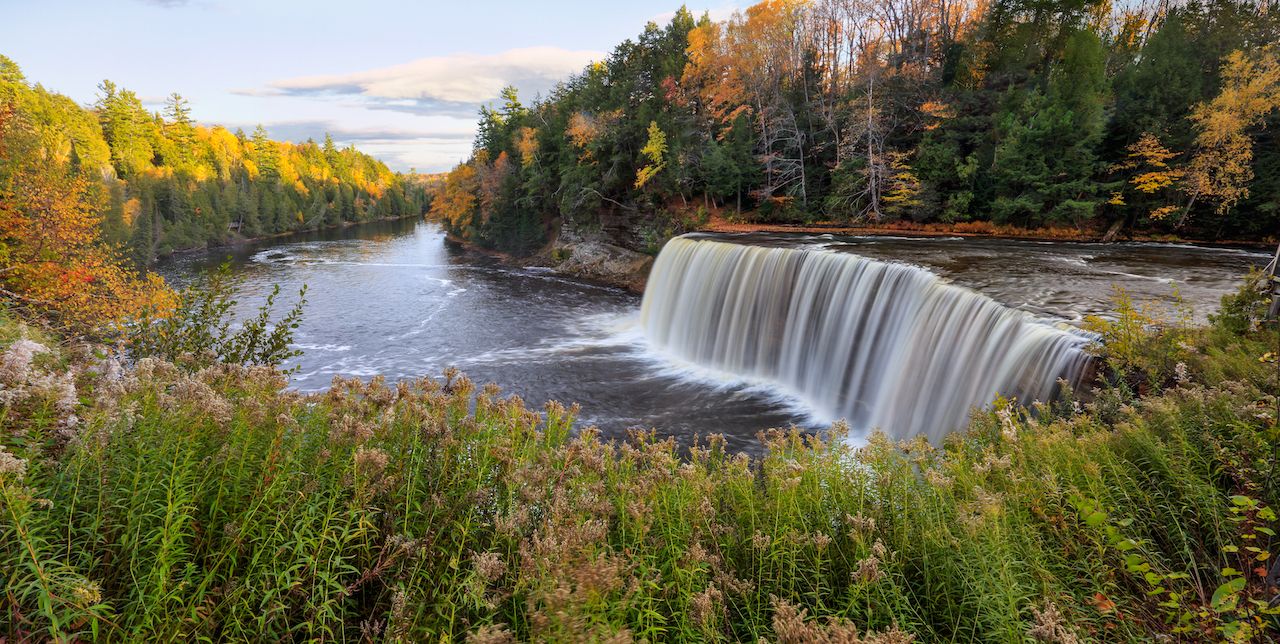 Tahquamenon Falls is either two or six falls, depending on your perception. Upper Falls — a 50-foot drop, 200 feet across — is regarded as more dramatic than Lower Falls, where five small cascades descend around an island. Nicknamed “Root Beer Falls,” tannins from local cedar swamps have turned the water a vivid shade of brown.

The 50,000-acre Tahquamenon Falls State Park can hook you up with a rowboat to access the island (where you can play in the falls), or you can scope out views from the trail along the riverbank. Here, you’re also not far from Lake Superior, on the eastern side of Michigan’s Upper Peninsula. 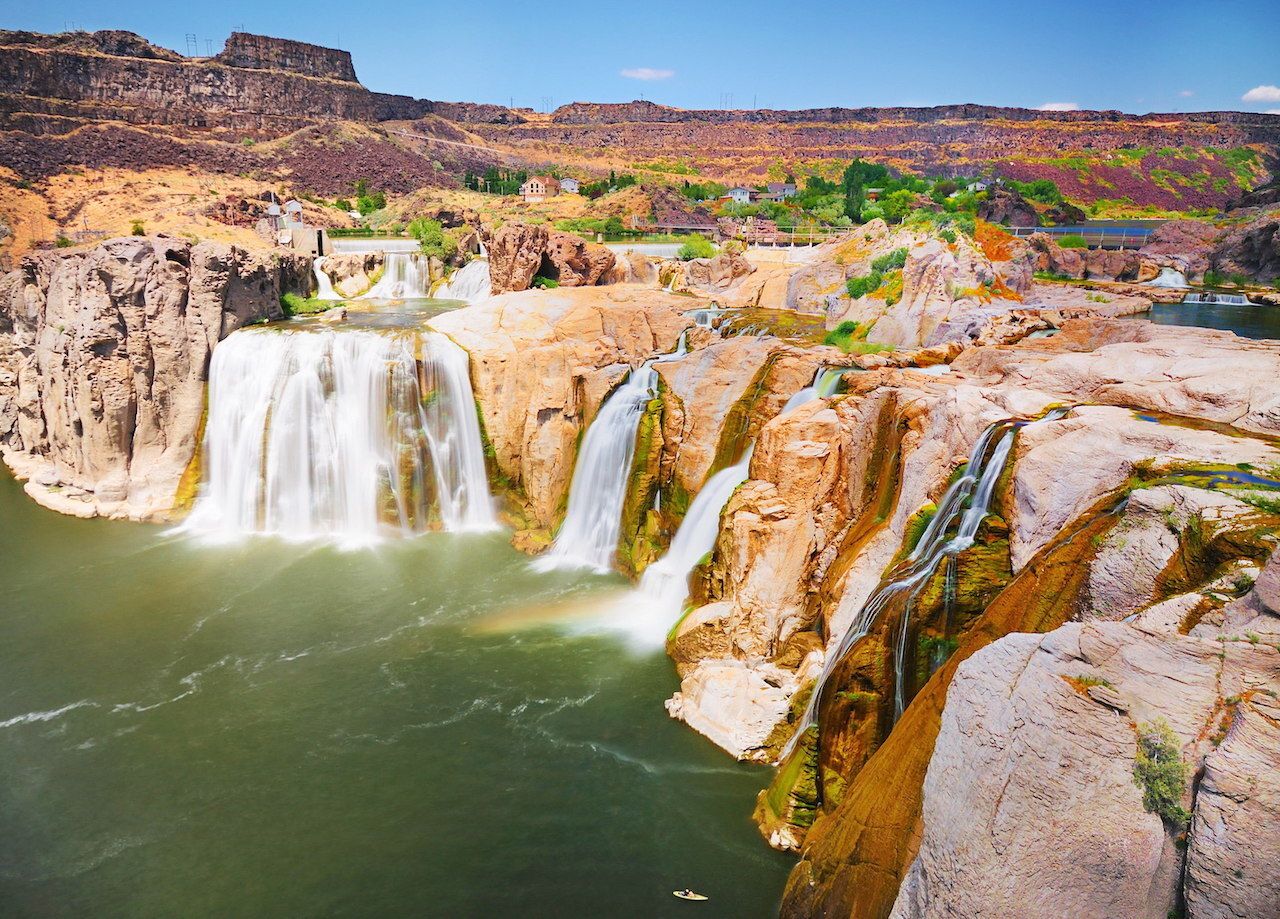 Nicknamed the “Niagara of the West” — but 45 feet taller — the Snake River’s Shoshone Falls needs no comparison. Formed during a massive Ice Age flood, the 900-foot-wide cascade has carved out a basalt canyon just east of Twin Falls, Idaho, flowing mightily all the way to the Columbia River. (Fun fact: That basalt comes from ancient Yellowstone eruptions.)

Because of irrigation diversion, Shoshone Falls is best viewed in springtime, when the cascades gush at 20,000 cubic feet per second. 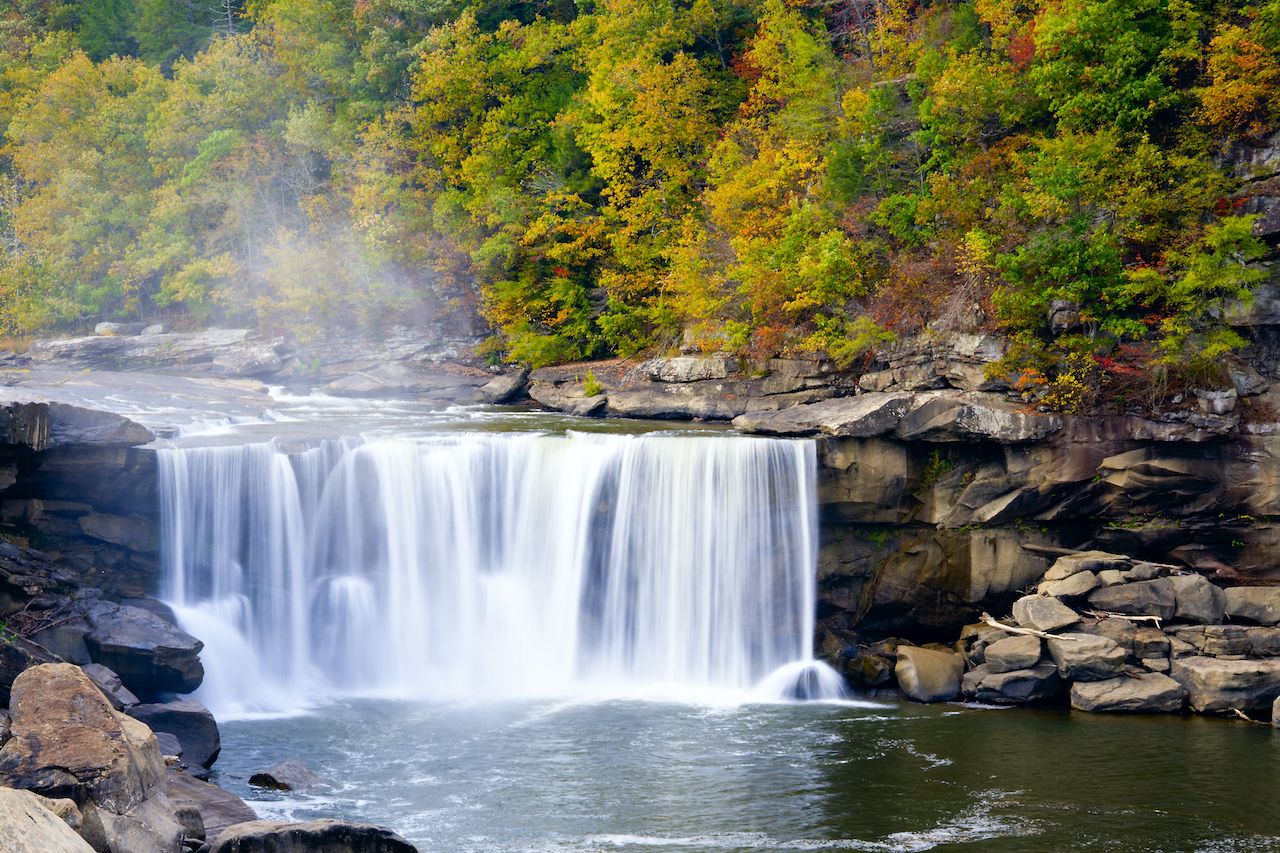 At 68 feet tall and 125 feet wide, Cumberland Falls is the second-largest waterfall east of the Rockies. But silver medaling in the waterfall game isn’t what Cumberland is known for. Instead, it’s known for its moonbows. They appear on clear nights on either end of the full moon — the only place in the Western Hemisphere where this visual phenomenon regularly occurs.

Though easily accessible via the Cumberland Falls State Resort Park, you could also raft the Cumberland River — in the Daniel Boone National Forest — for up-close views of the cascade. While certainly beautiful in the daylight, the moonbows are a sight to be seen. 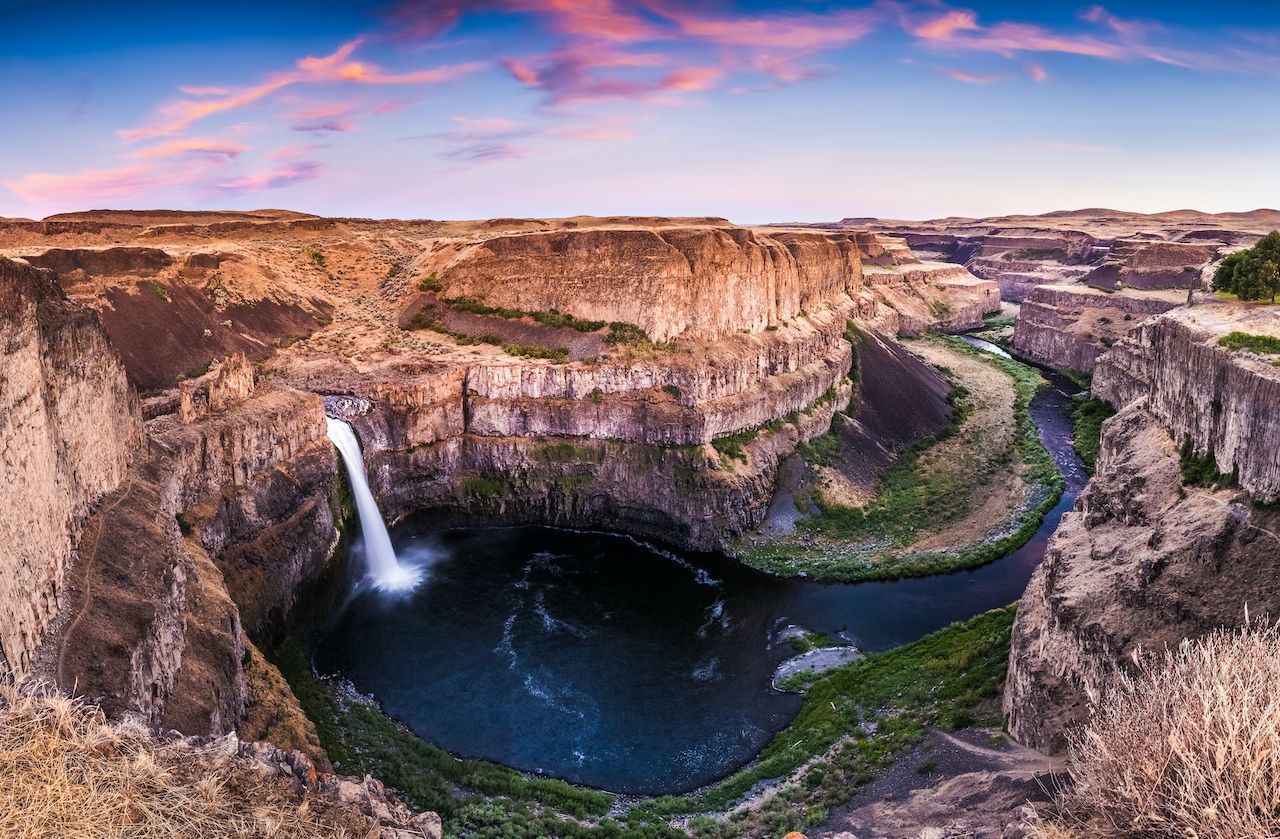 Out of Eastern Washington’s ancient lava beds and dry scablands pops Palouse Falls, a stunning cascade that drops 200 feet into a swirling, churning bowl of water at its base. It’s one of the last remaining waterfall remnants of the Ice Age floods, a series of catastrophic events that struck repeatedly over 2,000 years.

The gorge into which it spills provides stunning views just from the parking lot. There are a few short, easy hikes from here. More difficult scrambles can be taken down into the canyon. Note: The road in is a rough one — take it slow or get a high-clearance vehicle. 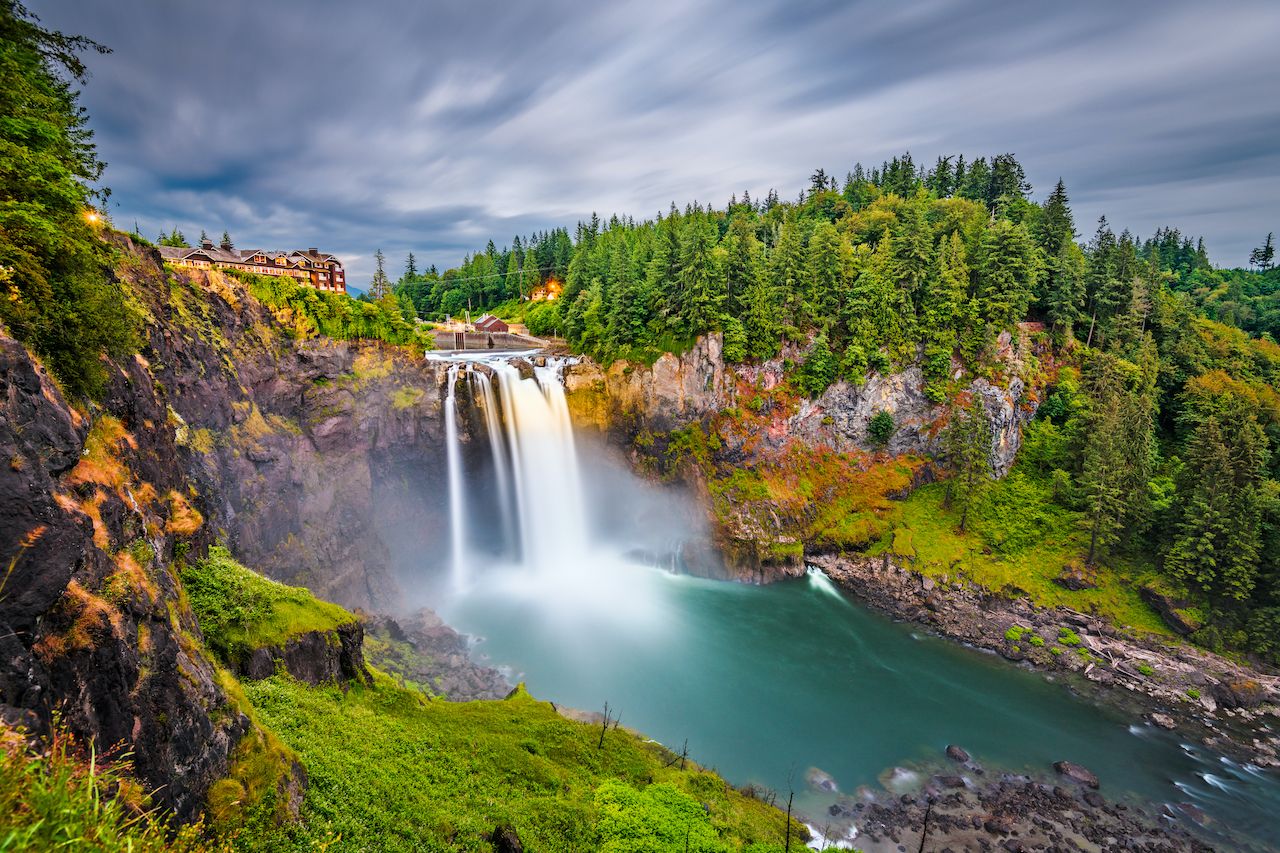 Twice as high as Niagara, Snoqualmie packs in over 1.5 million visitors every year, making it Washington’s second-most popular attraction (after Rainier). You might recognize it from Twin Peaks.

In 2019, the Snoqualmie tribe purchased the onsite lodge, the falls, and the surrounding 45 acres, reclaiming it as their own, which it had been for centuries. This is a sacred site — when you visit, keep this history in mind. 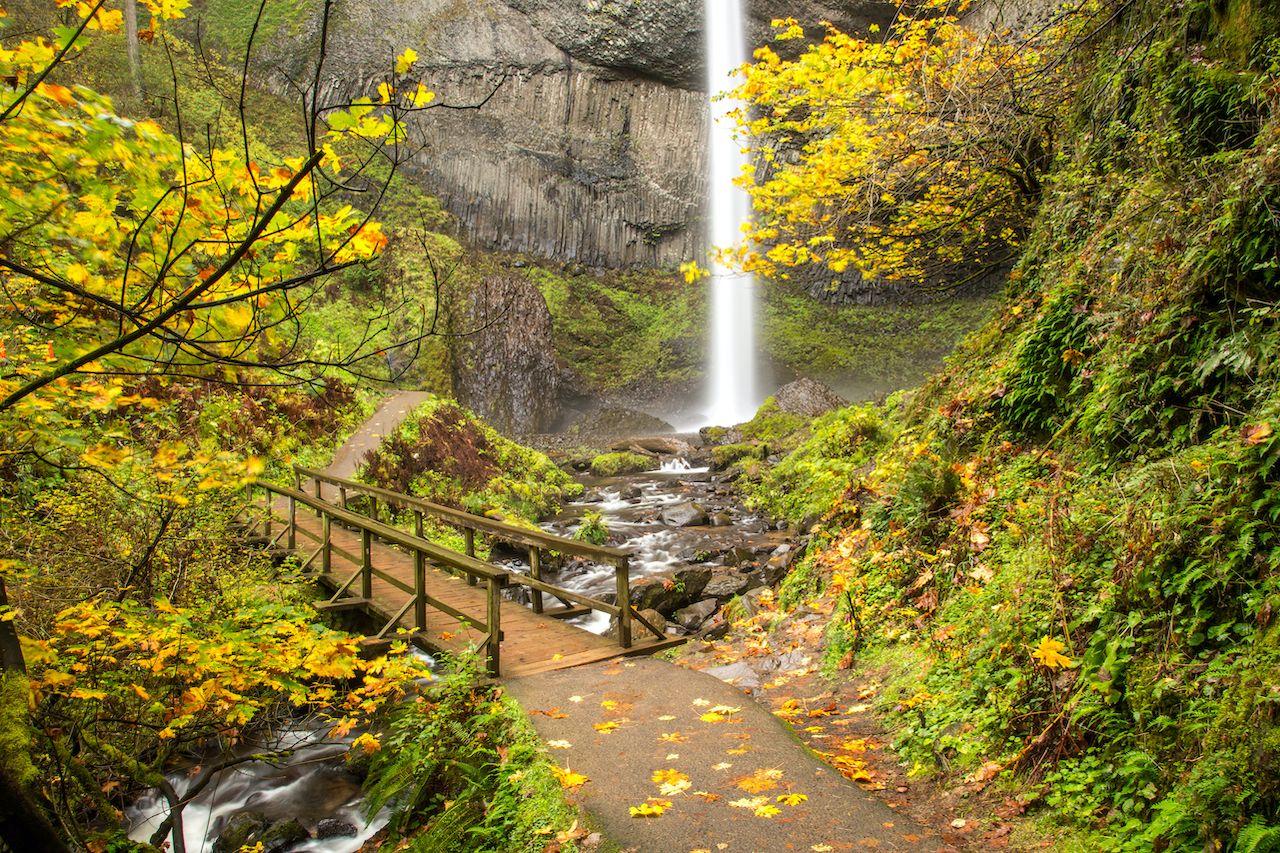 On the Historic Columbia River Scenic Byway — a 70-mile stretch just east of Portland, Oregon — Multnomah Falls is the piece de resistance. It’s also Oregon’s most visited natural attraction, and parking is hard to find from the second it opens. But 90 waterfalls — yes, 90 — alight this stretch; skip Multnomah until the crowds fade, and let the rest of this historic route grab your attention.

Of these 90, Latourell is one of the grandest and easily accessible falls off the road. A short hike leads to this view, and a longer, uphill stretch takes you closer to the top. 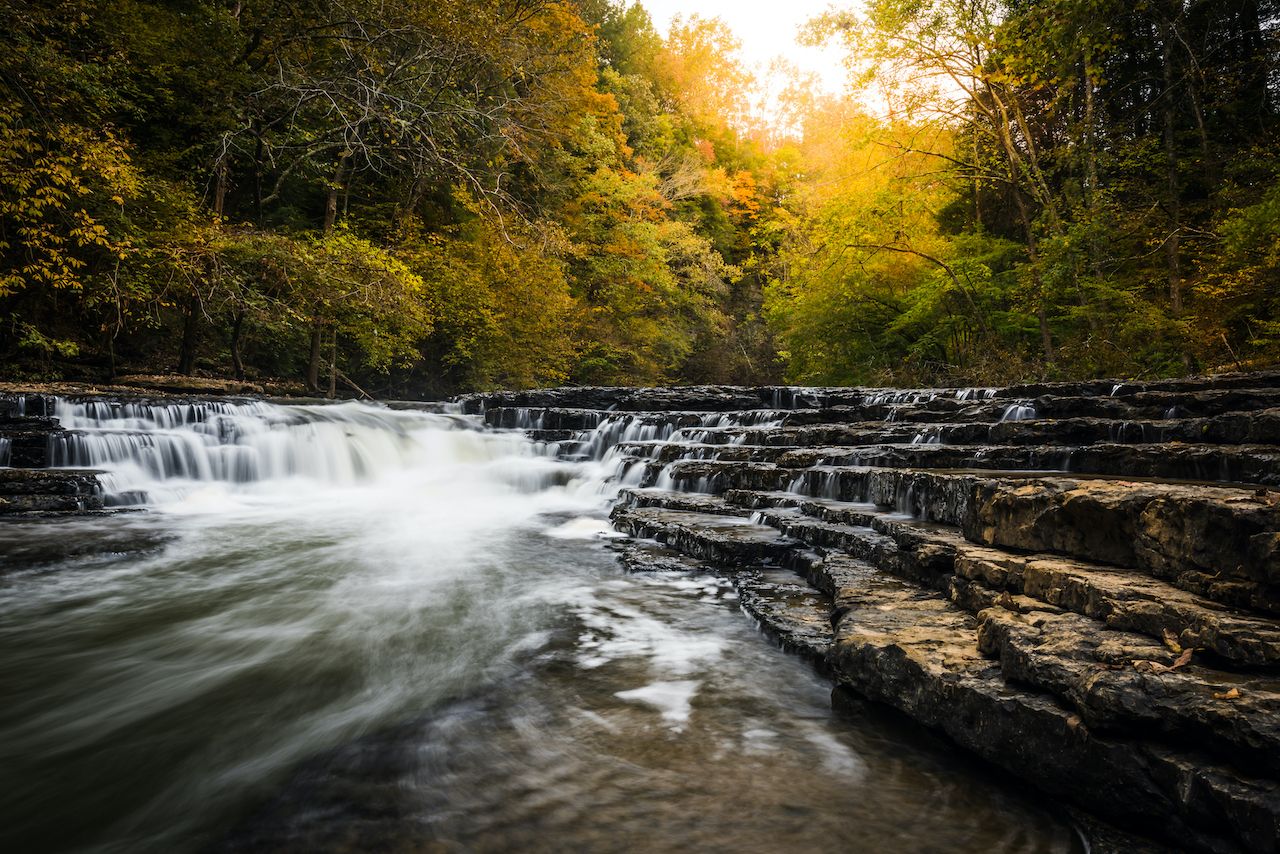 Less than 90 minutes from Nashville, Burgess Falls tumbles down the aptly named Falling Water River. It spills mightily for 136 feet into the bottom of a limestone gorge — beautiful 150-foot cliffs line either side.

Burgess State Park technically contains four waterfalls, but it’s the last of these that’ll make you pull off I-40. Trails of varying difficulties meander along the river and to a great viewpoint of the falls. 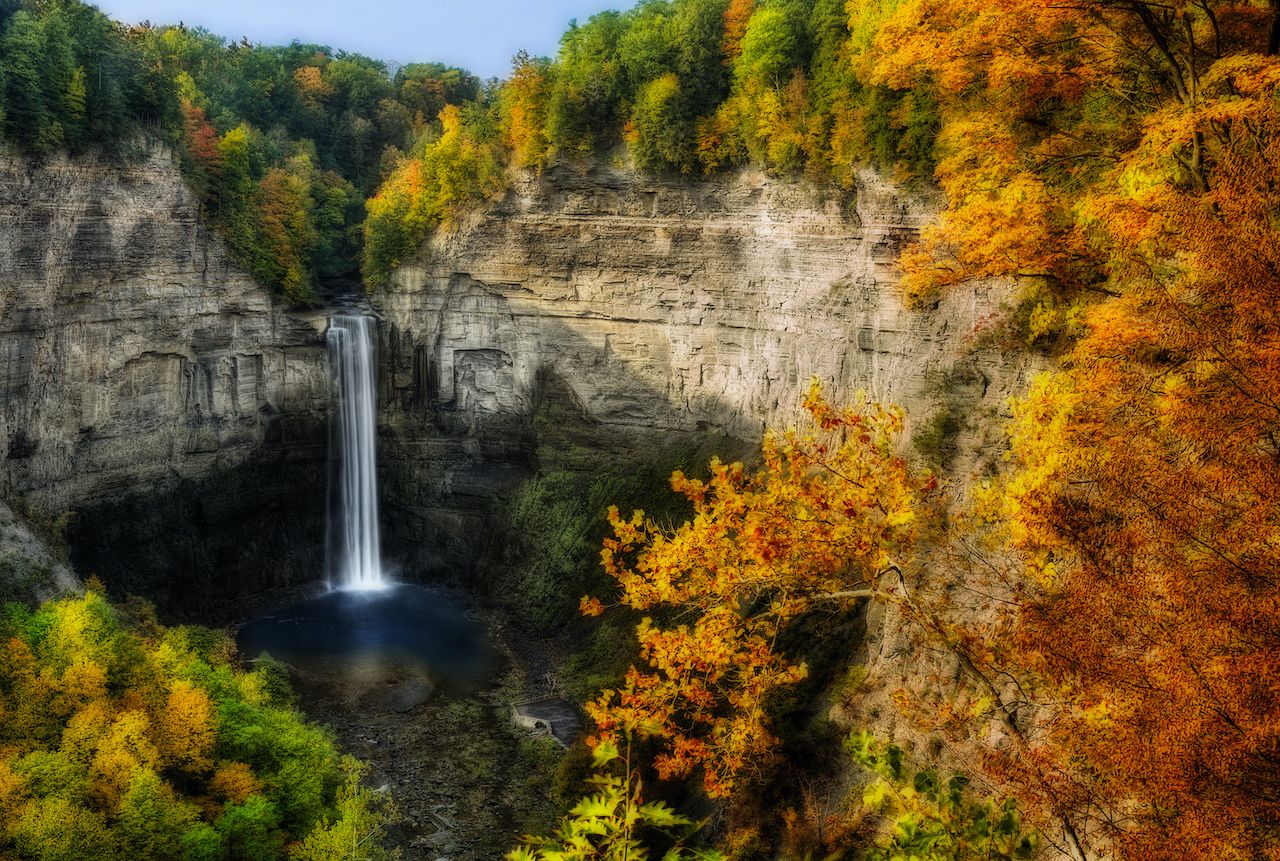 Pronounced tuh-GA-nick, this is the highest single-drop waterfall east of the Rockies. At 215 feet, it’s 33 feet taller than Niagara. And Taughannock Falls State Park, about 10 miles north of Ithaca, comes without the manufactured attractions, crowds, and long lines.

The hike to the Gorge Trailhead winds for a short 0.75 miles (you’ll find parking on NY-89). For a slightly longer trek, the 1.5-mile North Rim Trail and 1.2-mile South Rim Trail split from the Gorge Trail, also offering views of the falls. 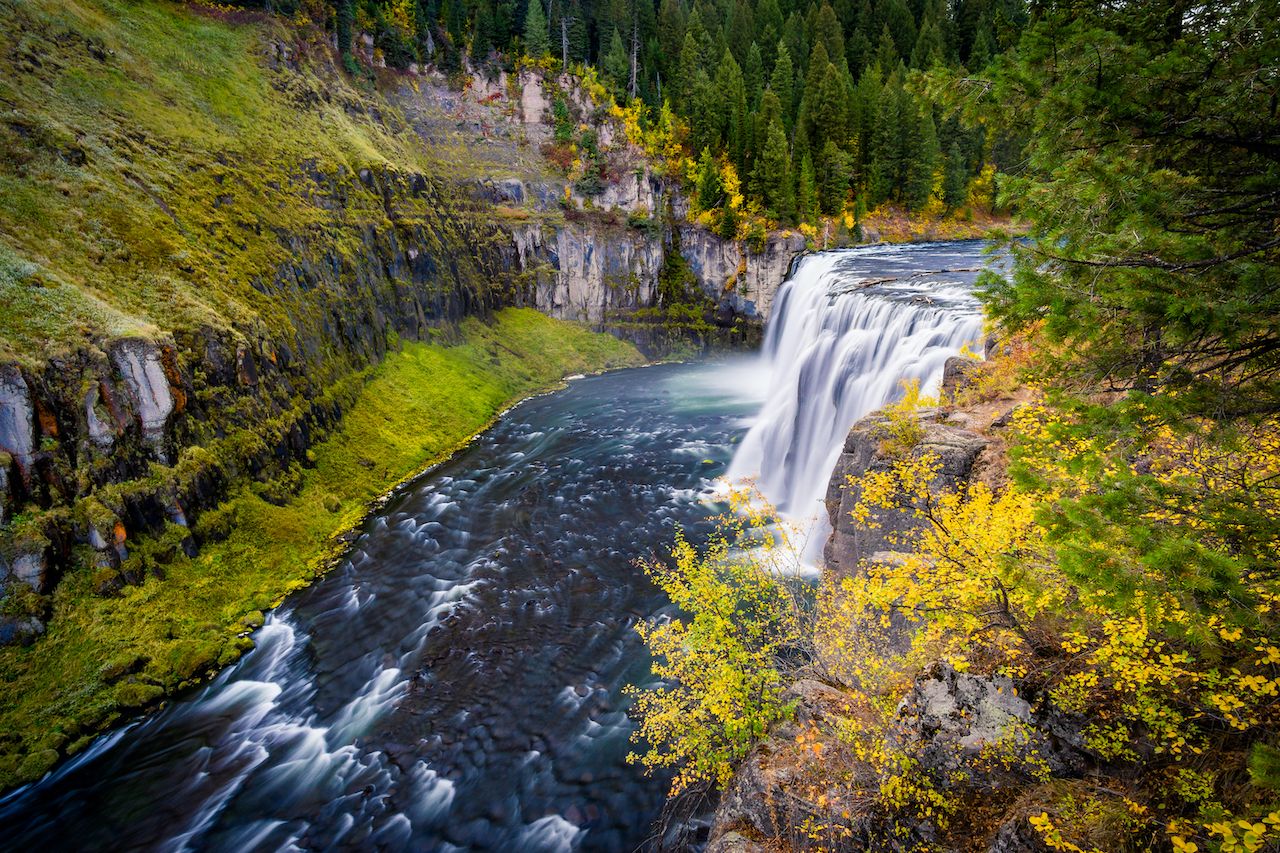 A curtain of water the size of a 10-story building cascades over a bed of volcanic rock at Upper Mesa Falls — and just a mile south, Lower Mesa Falls pretty much does the same thing. The Mesa Falls Scenic Byway winds for around 30 miles along vistas like these, through the Targhee National Forest, and near Yellowstone National Park.

Note: Most of the Snake River — where you’ll find the falls — has been wrangled and wrestled into submission by man, but not Upper or Lower Mesa Falls. 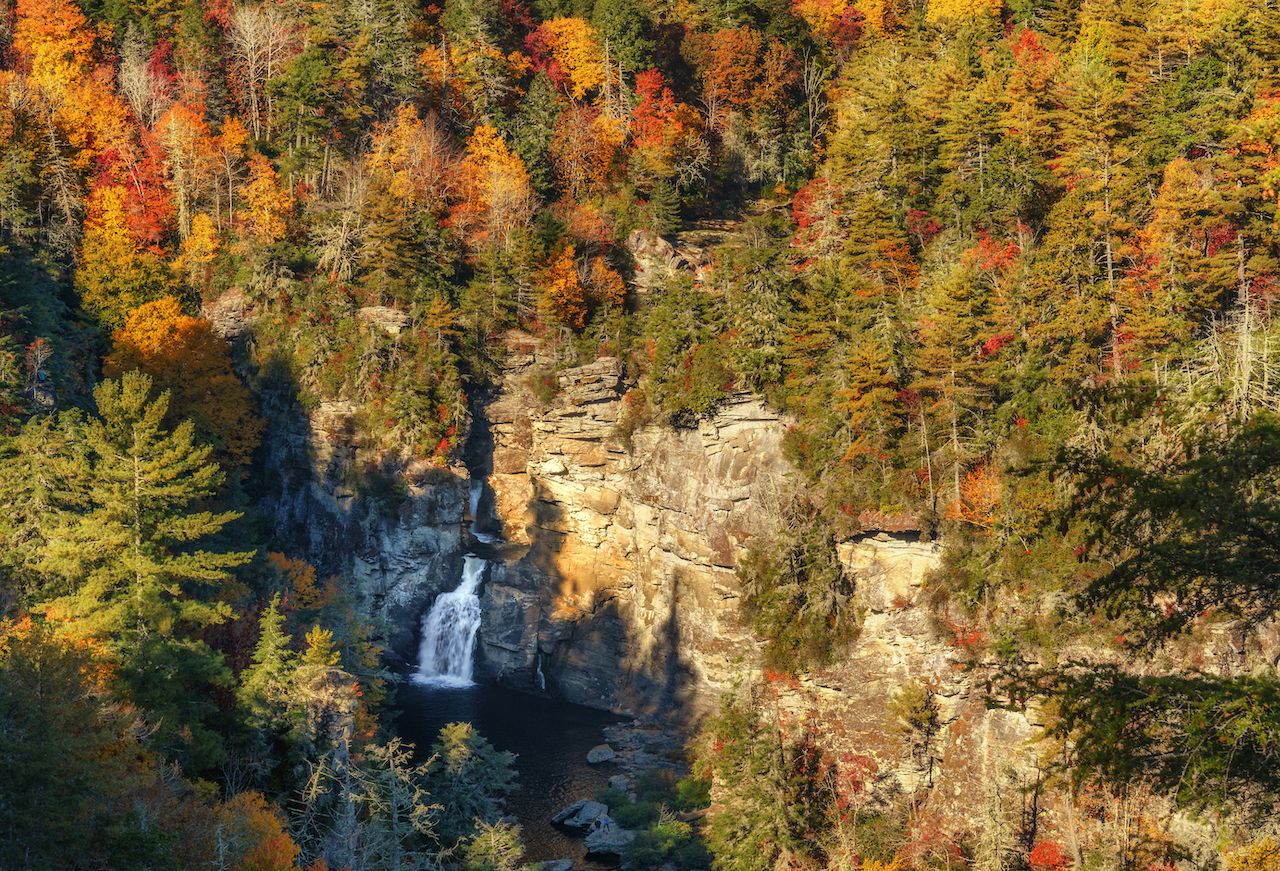 The most popular waterfall in the Blue Ridge Mountains — and not far from the Blue Ridge Parkway — the three-tiered Linville Falls is the highlight of the already spectacular Linville Gorge. Appropriately, three different trails (from easy to strenuous) snake around the gorge, from the base of the falls to the very tip-top. 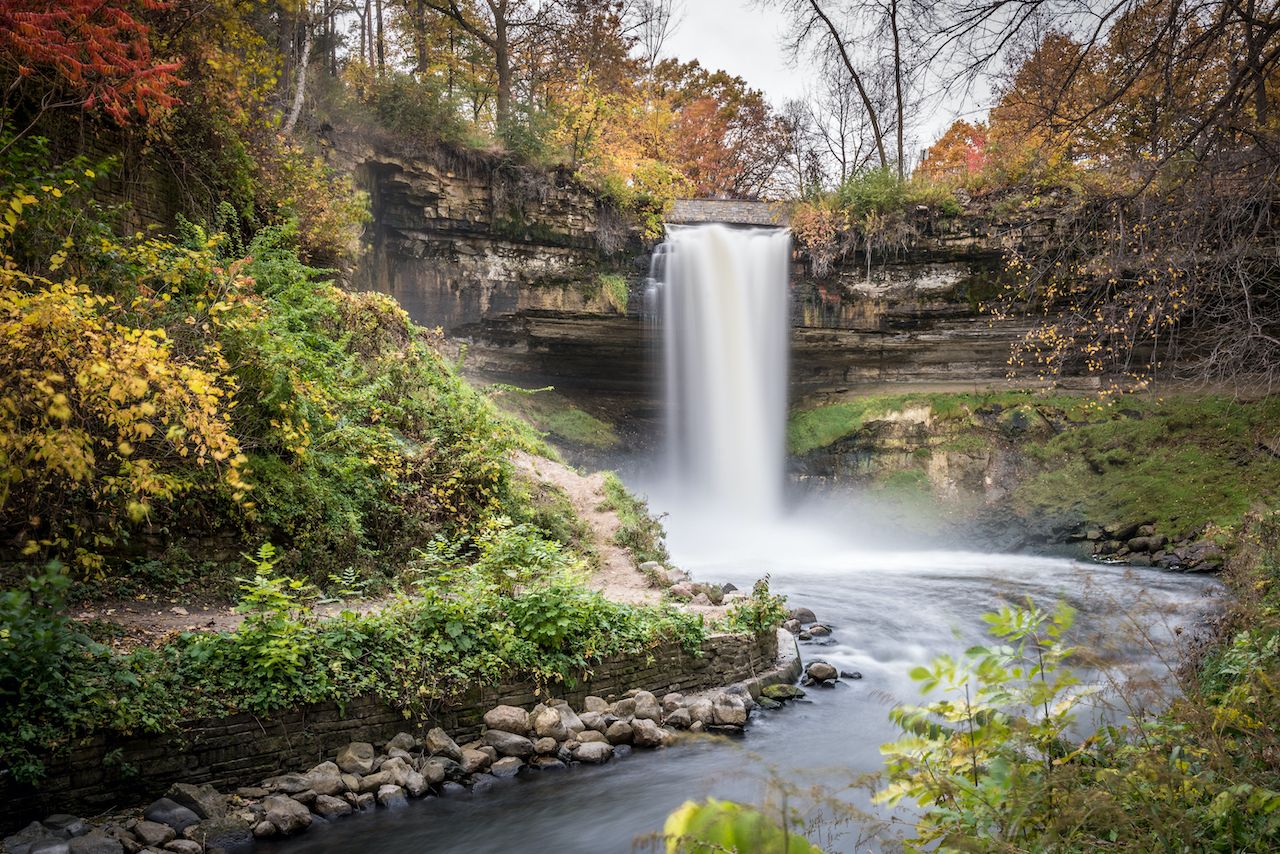 One of the few waterfalls smack dab in the center of a city, Minnehaha Falls tumbles for 53 feet in Minneapolis’ oldest park (and one of the oldest state parks in the country), surrounded by limestone bluffs and groves of oak, elm, and silver maple. Minnehaha Park overlooks the Mississippi, part of Minneapolis Grand Rounds — widely regarded as one of the best urban park systems in the world.

Why you should visit Buffalo, New York, in the winter. Really.