When you think of waterfalls in North America, there’s a good chance that Niagara Falls comes to mind first. While Niagara is certainly majestic, it’s not even close to the highest. Falls in Yosemite and Hawaii are taller by a wide margin. But what’s even more surprising is that waterfalls in Idaho like Shoshone Falls, are larger, too. But Idaho probably doesn’t crack your top 10 list of states with epics falls. But it should.

Idaho is home to some of the country’s most stunning natural beauty, not least of which is Shoshone Falls. Dubbed the “Niagara Falls of the West,” Shoshone sits just outside Twin Falls and it surpasses Niagara in height by nearly 50 feet. While the falls themselves are an ideal destination for sightseeing, the broader Twin Falls area is perfect for those craving outdoor adventure plus a solid brewery and culinary scene. From kayaking on the Snake River Canyon to exploring the city of Twin Falls itself, here’s how to make the most out of your visit to the Niagara Falls of the West.

How did Shoshone Falls form? 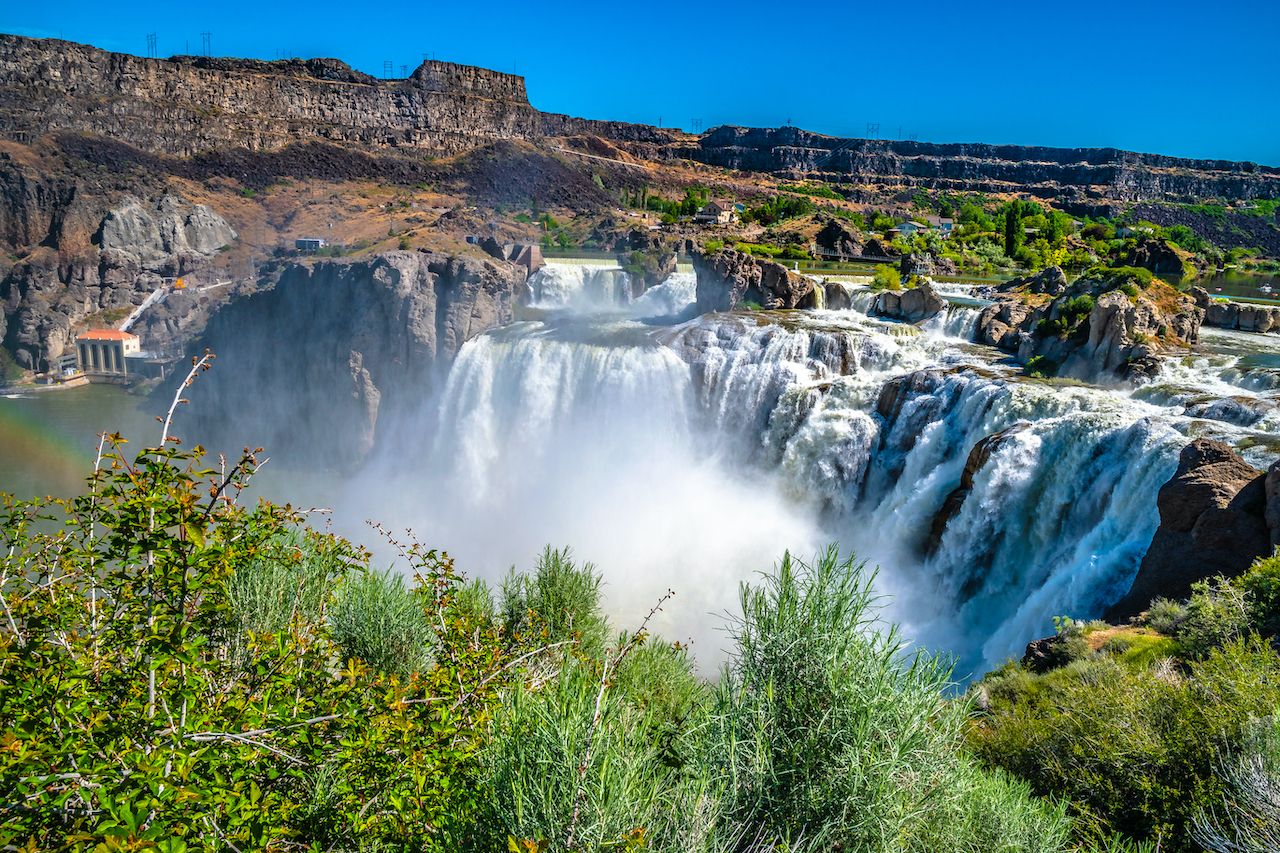 At 212 feet high and 900 feet wide, Shoshone Falls is one of the most beautiful waterfalls in the US. The falls are just seven miles outside Twin Falls, a city of just under 50,000 people in southern Idaho. They were created some 15,000 years ago during the Bonneville Flood of the Pleistocene Ice Age — the same time period in which the water that covered much of the Great Basin carved the Snake River Canyon. This process created Shoshone Falls as well as other regional waterfalls.

How to see Shoshone Falls 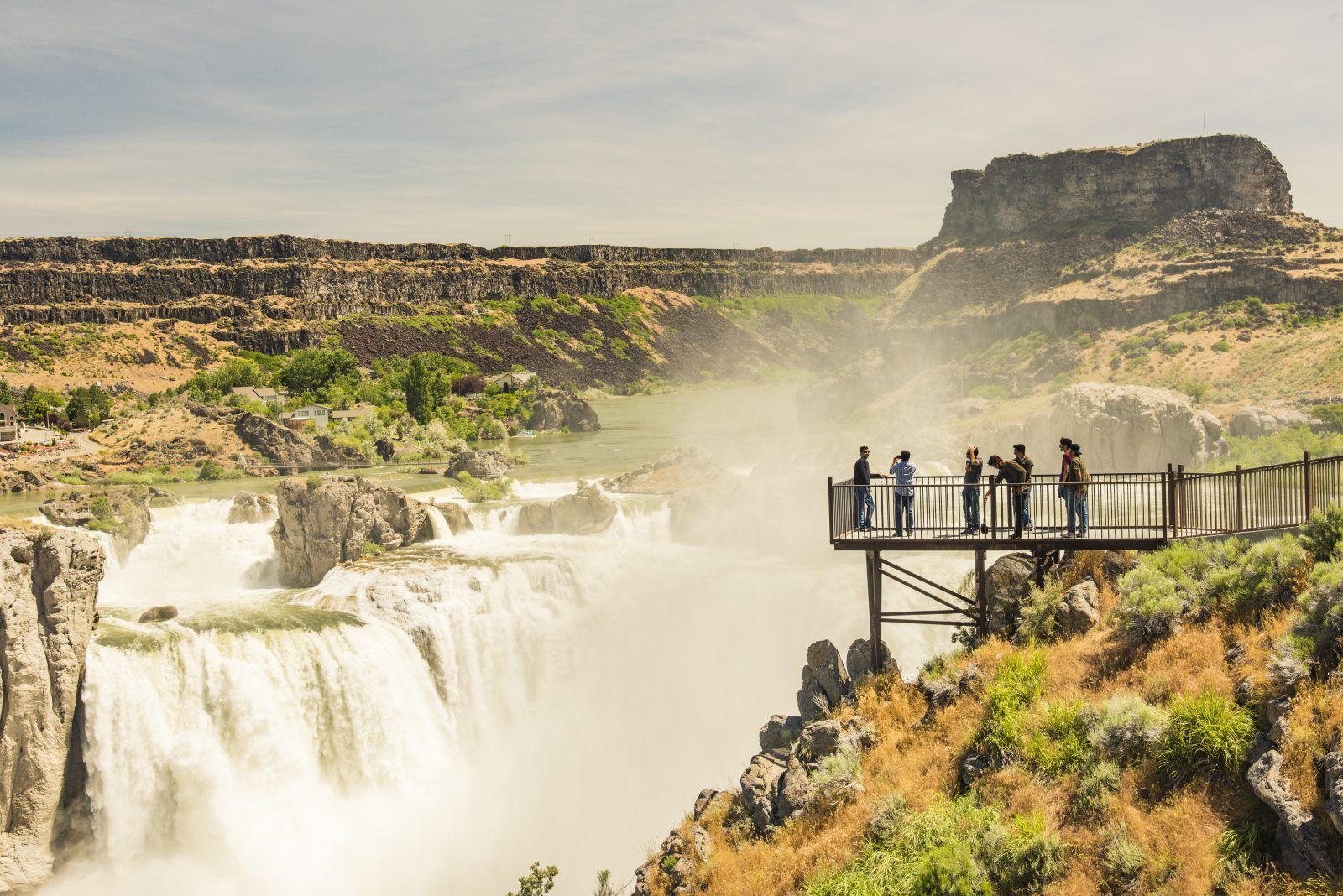 Your first stop to get a full view of the falls should be one of the observation decks. The first deck is near the park entrance and accessible via stairs. From this platform, guests have an unparalleled view of the falls. The second viewpoint affords a closer view and is just up the path from the entrance.

You can also hike around the falls, and the popular Canyon Rim Trail begins at the falls and travels roughly eight miles along the Snake River Canyon to the trailhead for Auger Falls. There’s also the aptly named Dierkes Lake Trail (a 1.8-mile loop around nearby Dierkes Lake), as well as a handful of very short, kid-friendly strolls through the park itself. 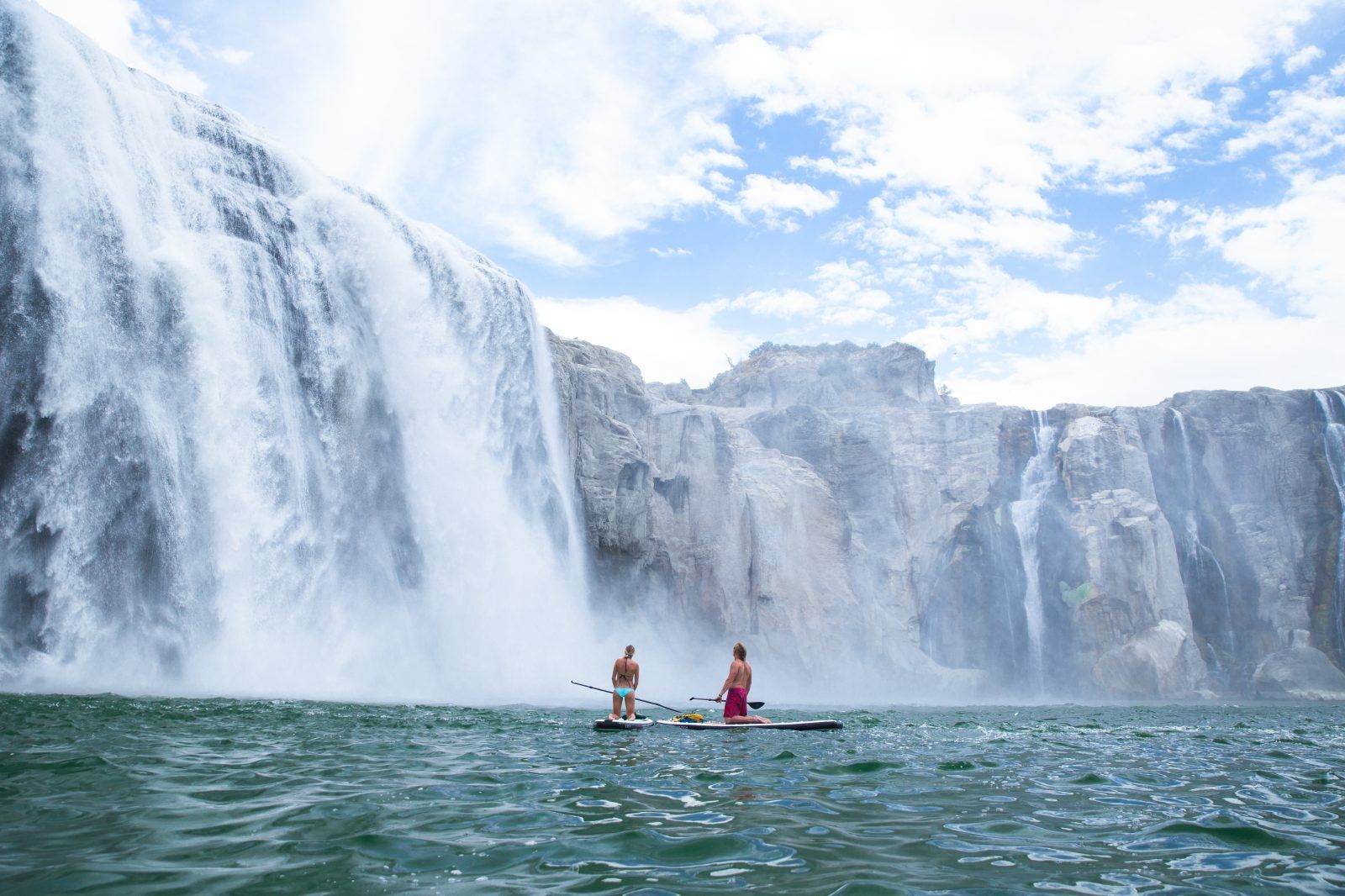 For a closer view of the falls, you’ll need to get a little more adventurous and hop in kayak. It makes Niagara Falls’ “Maid of the Mist” look tame, as you’ll need to paddle yourself to the bottom of Shoshone for a stunning (and terrifying) view of the thundering falls. Most people rent kayaks from AWOL Adventure Sports in Centennial Waterfront Park and paddle for two to three hours down the Snake River to Shoshone. Along the way, you’ll see Pillar Falls, pass under the Perrine bridge, and take in the views of the Snake River Canyon before finally arriving at the imposing waterfall. 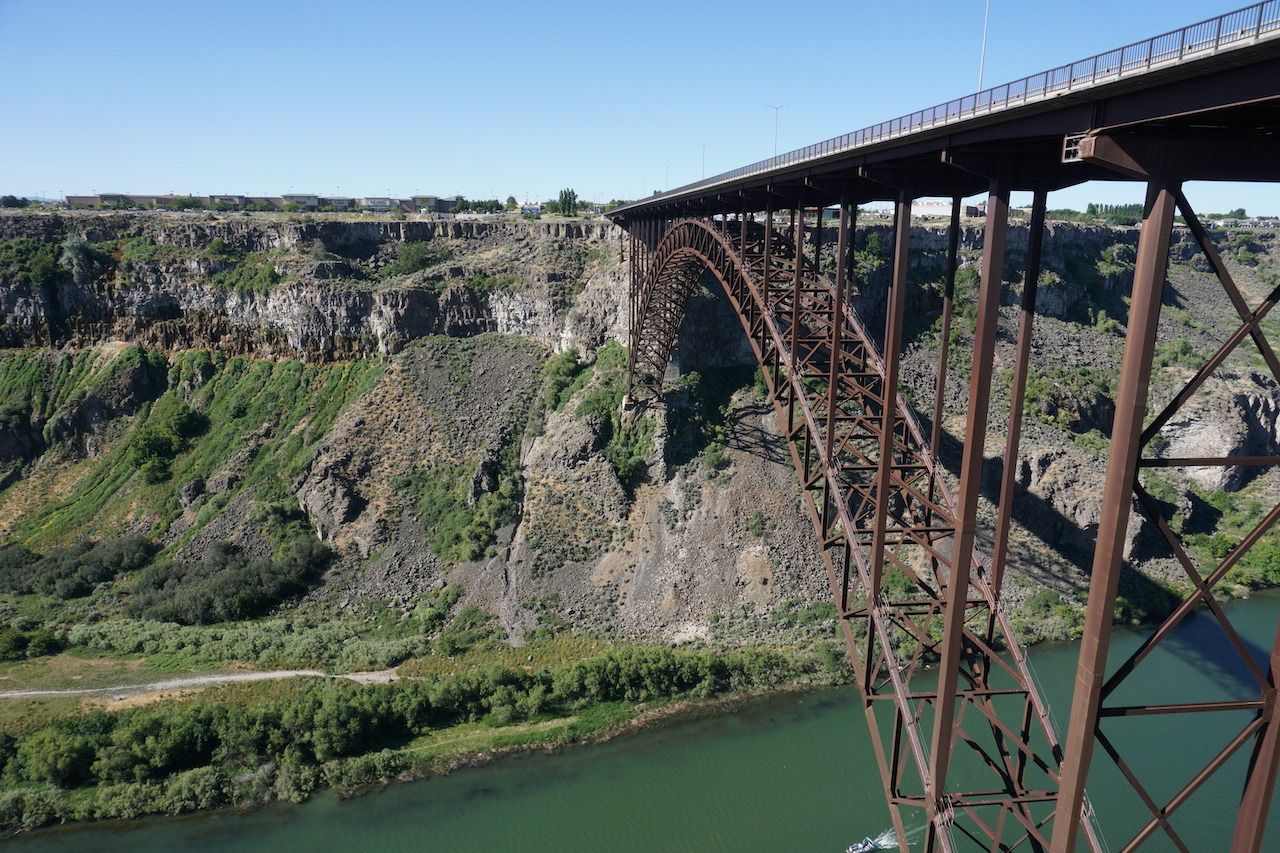 Shoshone Falls might be the visual highlight of the area, but Snake River Canyon is definitely the adventure highlight. Whether it’s hiking, boating, stand-up paddleboarding, kayaking, canoeing, rock climbing, or even golfing, there’s plenty to do to keep busy in the canyon.

Snake River Canyon is more than 50 miles long, with several waterfalls and natural springs along its length. The name might sound familiar to adrenaline fans as it was the site of Evel Knievel’s infamous 1974 jump (which was unsuccessful). And the Perrine Bridge, which crosses 500 feet above the canyon, is popular among base jumpers (which you actually can try yourself on a tandem jump).

One of the best ways to explore the canyon with a hike to Pillar Falls. It begins on Pole Line Road in Twin Falls then descends to the bottom of the canyon, where you’ll feel the refreshing spray of Pillar Falls. You can also take the trail to a section of the canyon farther east, on rugged terrain through trees and bushes. You’ll eventually arrive at a shaded camping area near the shore with great views of Perrine Bridge. 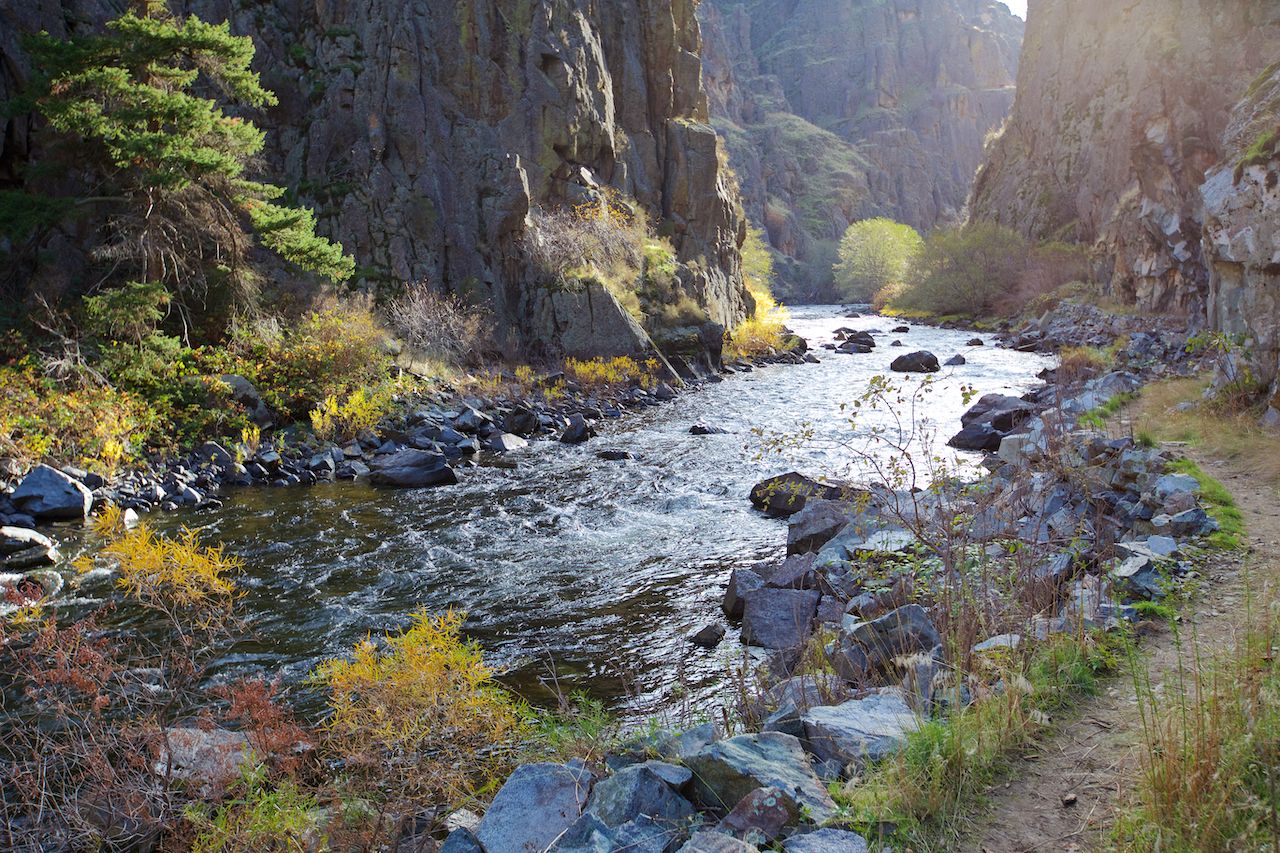 You can also explore the nearby Hells Canyon — the deepest river gorge in North America — on an unforgettable jet boat tour. The tour begins at Pittsburg Landing and heads upriver to see bighorn sheep and other wildlife that call the canyon home. You’ll stop at the Kirkwood Ranch and Museum, Sheep Creek Cabin, and other points of historic interest. The trip continues upriver to Rush Creek, Granite Creek, and Hells Canyon Dam, where you’ll be able to swim in the calm pools to cap off an eventful day.

For something extremely unexpected, dig up your scuba certification card and book a dive at nearby Dierkes Lake, where the deep water holds curiosities like sunken rowboats, a metal shark cutout, and a hidden treasure chest. 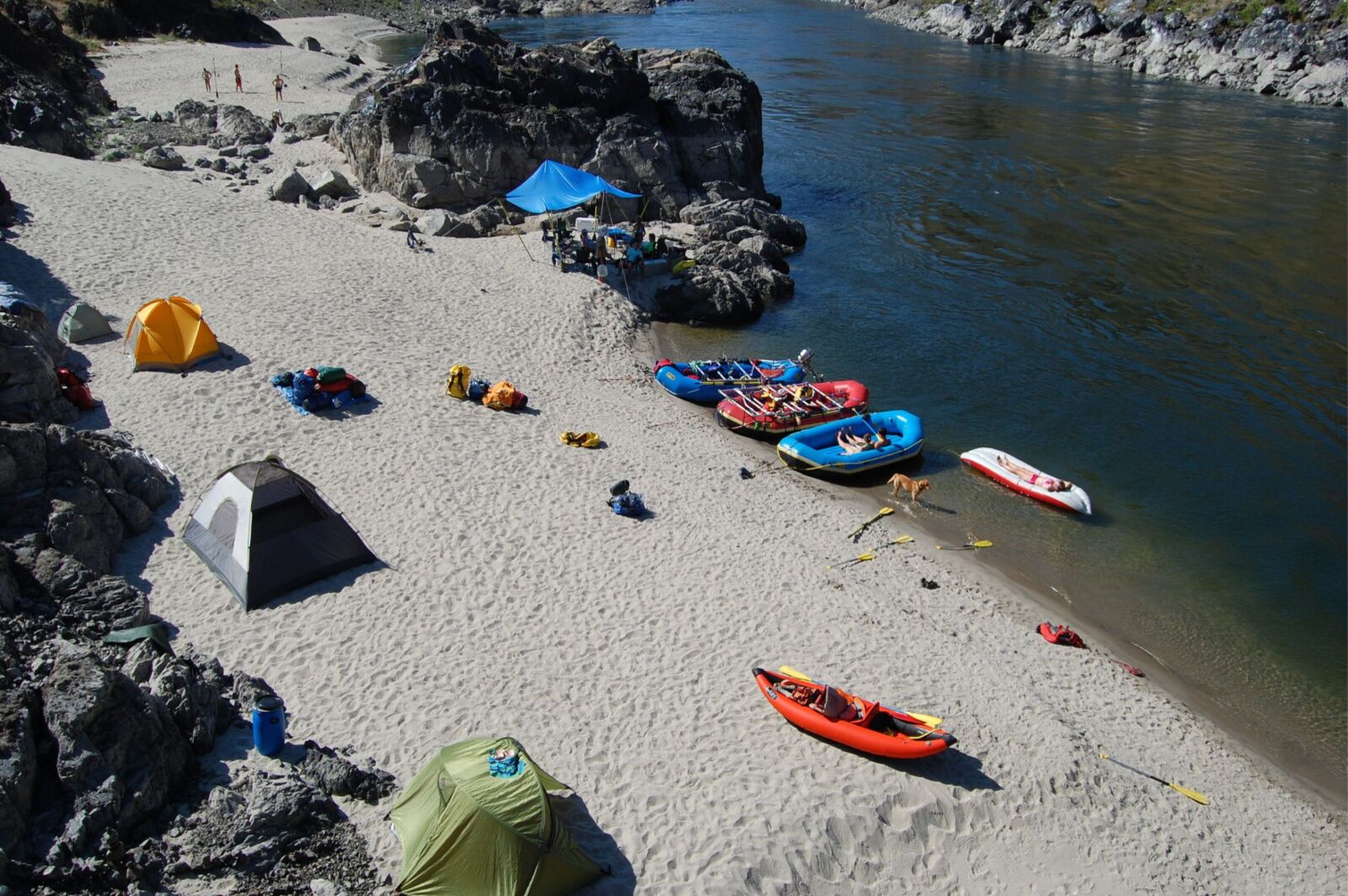 While you can’t camp at Shoshone Falls or nearby Dierkes Lake, you don’t have to go too much further past that to find a place to pitch your tent. Book a site at the Oregon Trails Campground (5.3 miles away), the Rock Creek RV Park (8.3 miles away), or the Twin Falls KOA (10.5 miles away). Oregon Trails Campground takes online reservations and has Wi-Fi, the RV park takes reservations but is only for RVs, and the Twin Falls KOA has everything from tent sites to rental cabins, plus amenities like a pool and on-site mini golf.

How to watch the Shoshone Falls Light Show 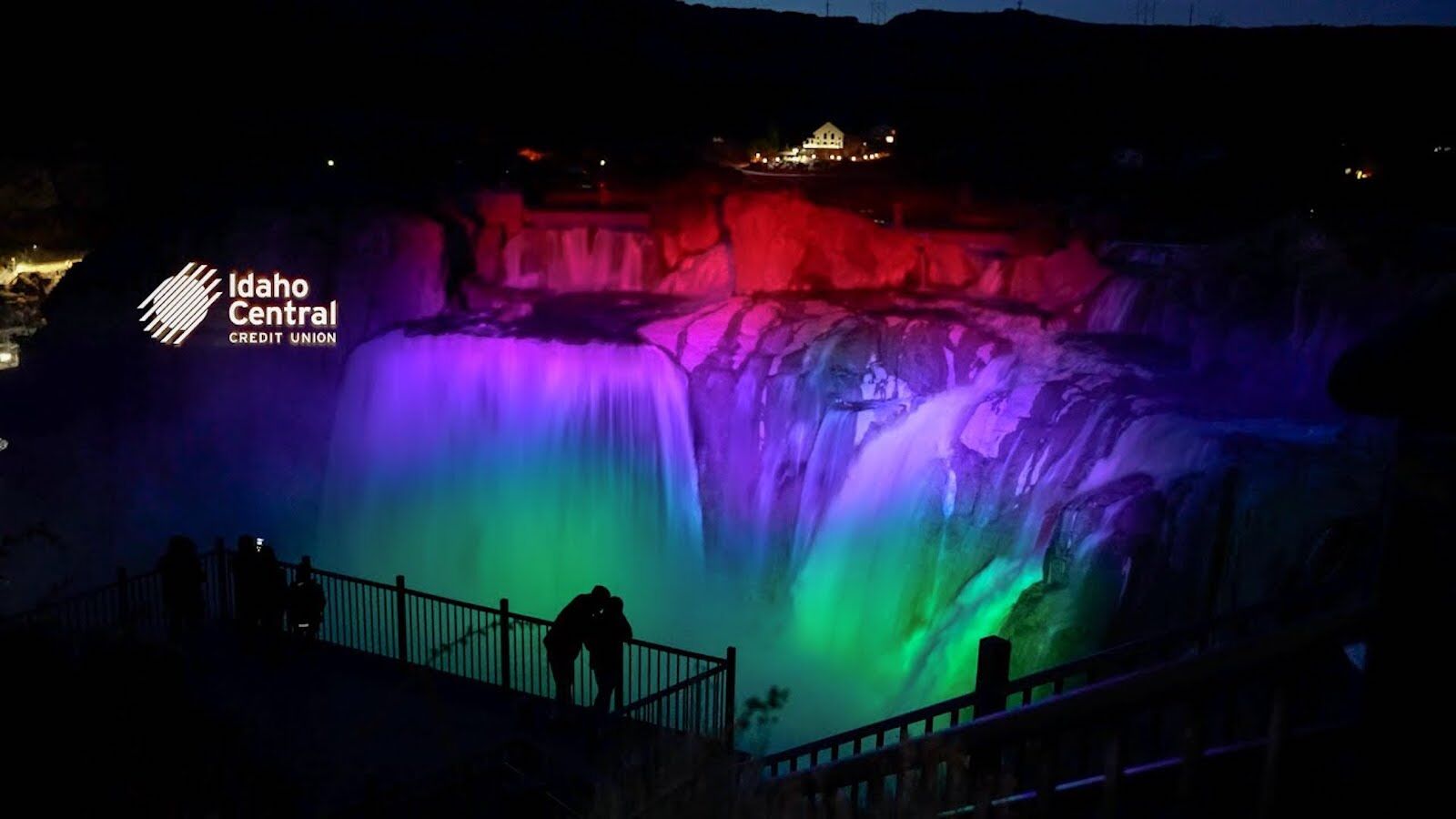 As if Shoshone Falls wasn’t gorgeous enough on it own, there’s a summer light show to make the experience extra-magical. The Shoshone Falls Light Show — technically called Shoshone Falls After Dark — only happens once a year in May or June, depending on flow. It runs for just one week and it’s essential to buy tickets in advance as it always sells out. During the 20-minute show, the falls are illuminated with multicolored lights and various patterns, putting on a dazzling display against the night sky.

Keep an eye on Southern Idaho’s tourism website for ticket announcements, and if you’re lucky enough to snag a spot, pack a flashlight and arrive about 10 minutes early to give yourself time to get to the viewing area before the show. 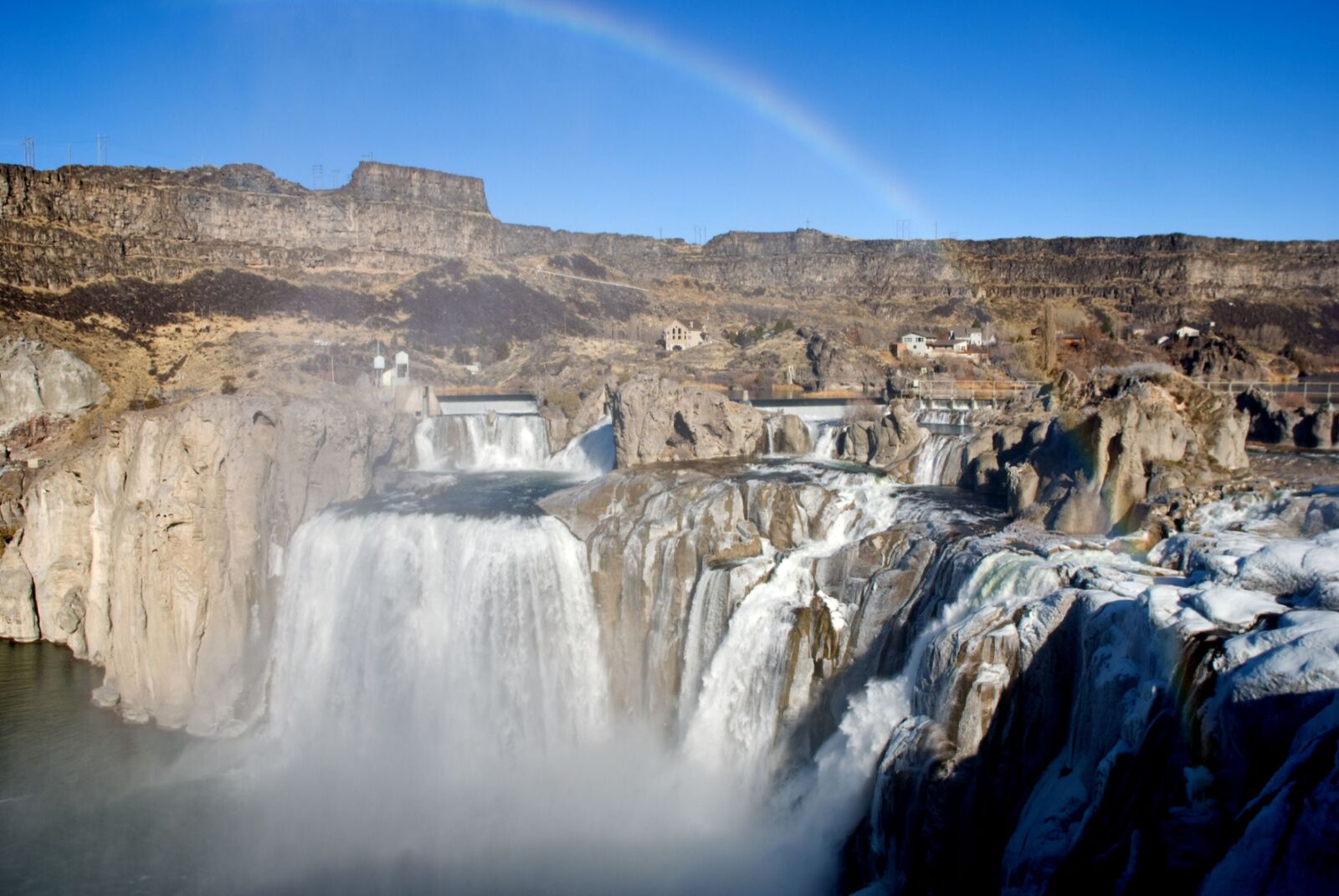 Shoshone Falls is a year-round destination, but visit in late spring to catch the light show mentioned above. That’s also when the falls are at the peak due to snowmelt from higher elevations. The falls can look almost dried up in autumn, but fall is also a great time to explore some of southern Idaho’s area hikes or plan a backpacking trip in nearby national forests. If you’re going just to see the falls, go in spring. But otherwise, there’s plenty of nearby recreation any season. And that includes winter, too — nearby Craters of the Moon National Monument is cool any time of year, but it’s an unbeatable spot if you’re a cross-country skier come December. 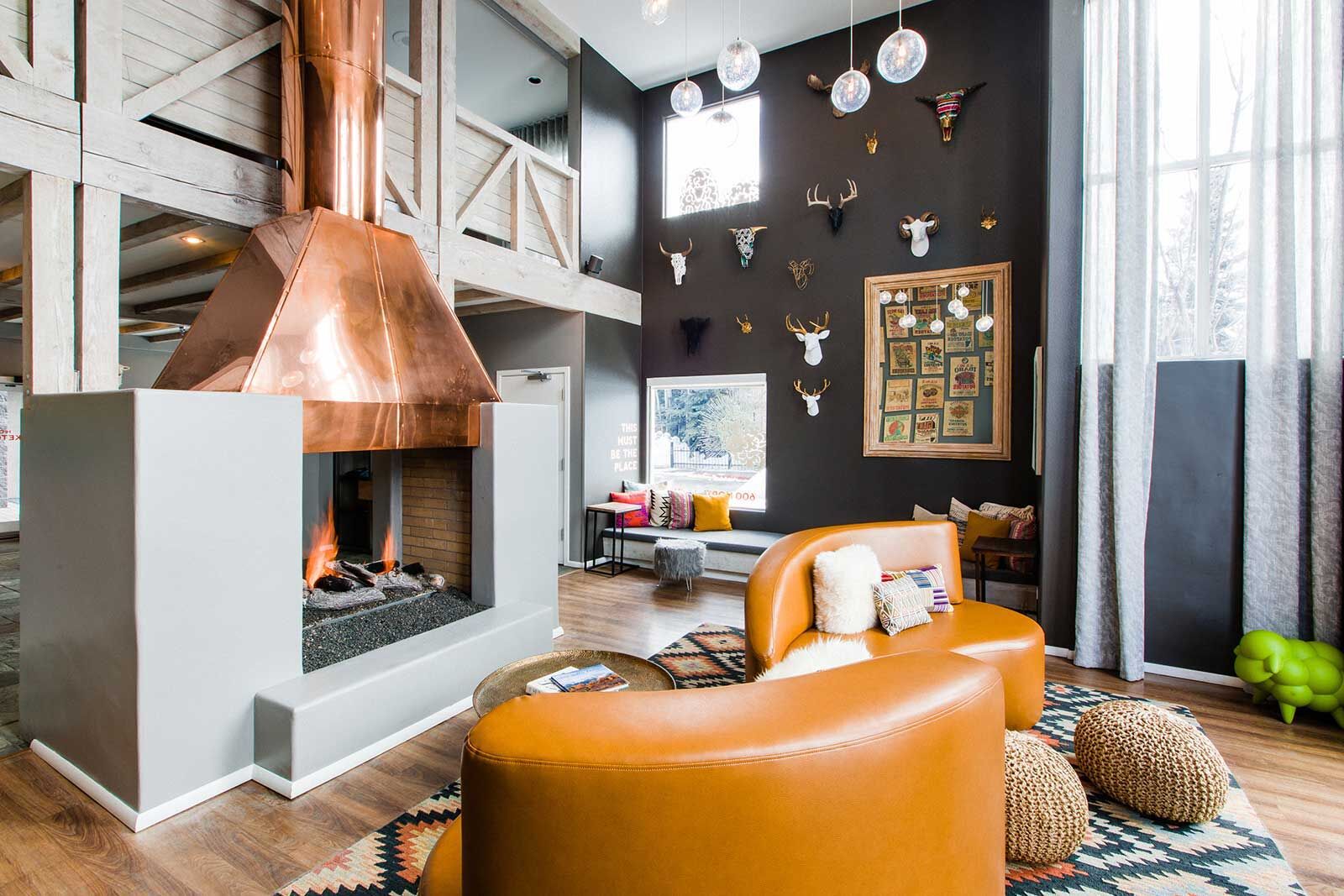 Shoshone Falls is in Twin Falls, Idaho, which has all the various types of hotels and lodging you’d expect from a mid-sized town. Most hotels are chai properties with a nationwide presence like Best Western Plus, LaQuinta, or Comfort Inn and Suites. While they’re not necessarily glamorous, they’re comfortable and convenient and a good choice if you plan to spend your days recreating, rather than lounging at a resort.

However, there are a few more unique choices around town, too. You can book a glamping dome at Miracle and Banbury Hot Springs (about 30 minutes from the falls) or, if you don’t mind driving down to see the falls for a day, book a more upscale resort near Sun Valley (about 1.5 hours from Twin Falls). In Sun Valley, unique, upscale options include Sun Valley Lodge or Hotel Ketchum.

What to do in Twin Falls and around Shoshone Falls 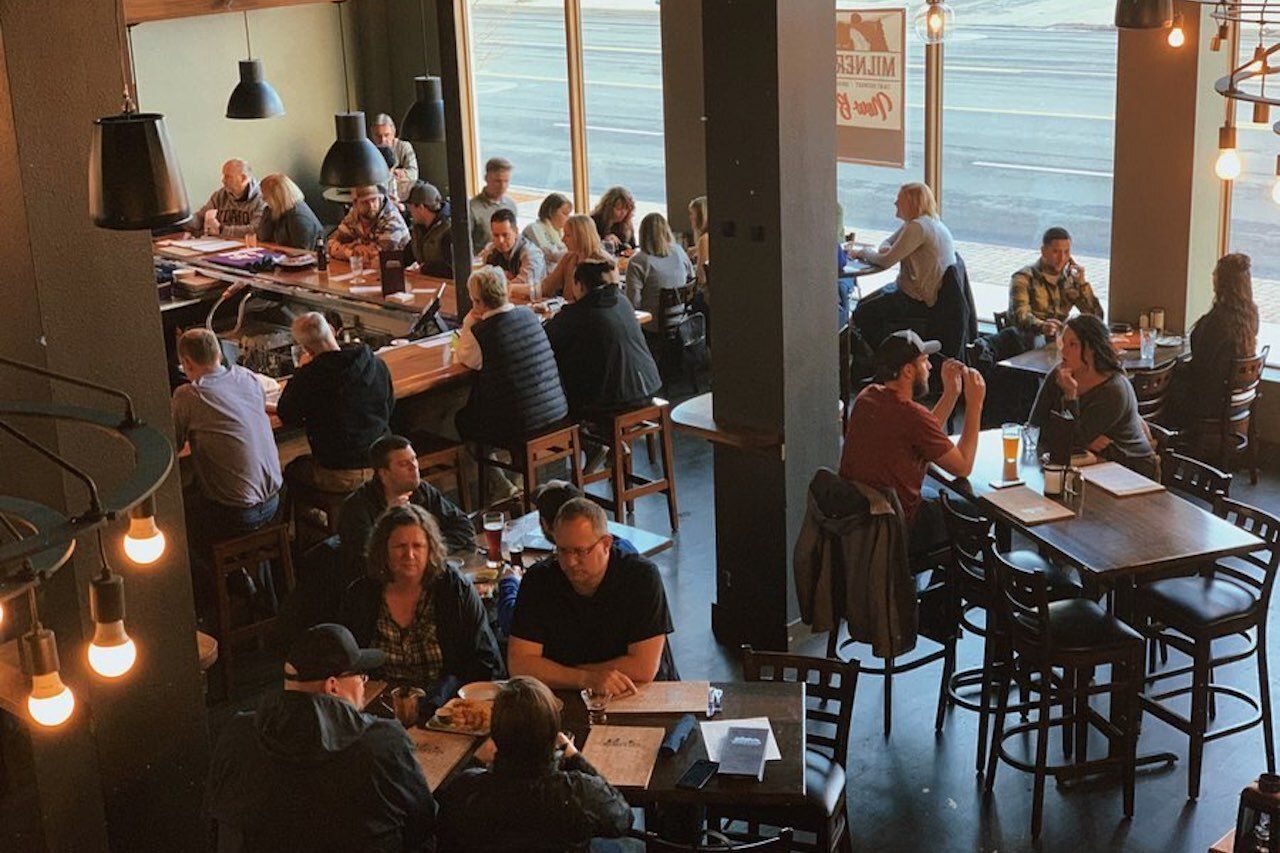 While you can’t go wrong spending most of your time at the falls or Snake River Canyon, it would be a mistake not to check out what Twin Falls has to offer. For a relatively small city, Twin Falls has a thriving craft beer scene. KOTO Brewing Co. is owned by a family with deep roots in the Twin Falls community, and equally popular is Milner’s Gate, a brewery and full bar and restaurant named in honor of the Milner Dam, completed in 1905.

Your trip can take a more educational turn at the Herrett Center for Arts and Science, a natural history museum on the campus of the College of Southern Idaho with an impressive collection from the prehistoric Americas. That include s geological specimens, material relics of the Buffalo Nation, and artifacts from Peru that predate the Inca The museum also houses the Faulkner Planetarium, the largest in the state with one of the biggest wheelchair-accessible public telescopes on Earth.

You don’t have to kayak to Shoshone Falls to get a healthy dose of the outdoors on your visit to Twin Falls, either. Rock Creek Park, on the southwestern edge of the city, has 12 acres of green parkland running along the canyon. You can follow the Old Towne Rock Creek Parkway Trail from downtown Twin Falls through the park, or take advantage of facilities like a disc golf course, fishing holes, horseshoe pits, picnic tables, and volleyball courts.

If you happen to be visiting the area in early September, you’re in luck. The Twin Falls County Fair runs for five days in early September and has been a popular event since 1916. The fair has all the classics like vendors, carnival rides, livestock competitions, and country music concerts, but it also coincides with the Magic Valley Stampede PRCA Rodeo. The rodeo alone makes the trip more than worth it.

National Parks11 Spectacular US Waterfalls To Visit This Fall
Tagged
Outdoor Idaho, United States
What did you think of this story?
Meh
Good
Awesome

May 3, 2022 Eben Diskin
✖
travelstoke
Download the mobile app
stoked by