In Italy, autumn builds up slowly. The blazing sun still calls a few diehard sunbathers to the beach on some early October days while storms roll in on other days, leaving plummeting temperatures in their wake. These turbulent days are the backdrop for a season of grape harvesting, olive pressing, food festivals, and celebrations of agriculture. Visitors to Italy in the fall can expect earthy vegetables like pumpkin and mushrooms, gamey meats, and the most prestigious of autumn foods, truffles.

One of the best ways to try Italy’s fall food offerings is to visit sagre, or local food festivals, which celebrate a particular food of the area. Some of these festivals, like the White Truffle Fair in Alba, Piemonte, have become internationally acclaimed events with celebrity chef appearances. Many others, however, have remained strictly local events with stalls selling handicrafts, folk dancing, and the much anticipated tombola — a board game resembling a raffle. Some sagre in rural areas have even maintained the tradition of blessing all the local farmers’ tractors to ensure a good harvest.

Here are some of the most important fall foods to try in Italy and where to sample them. 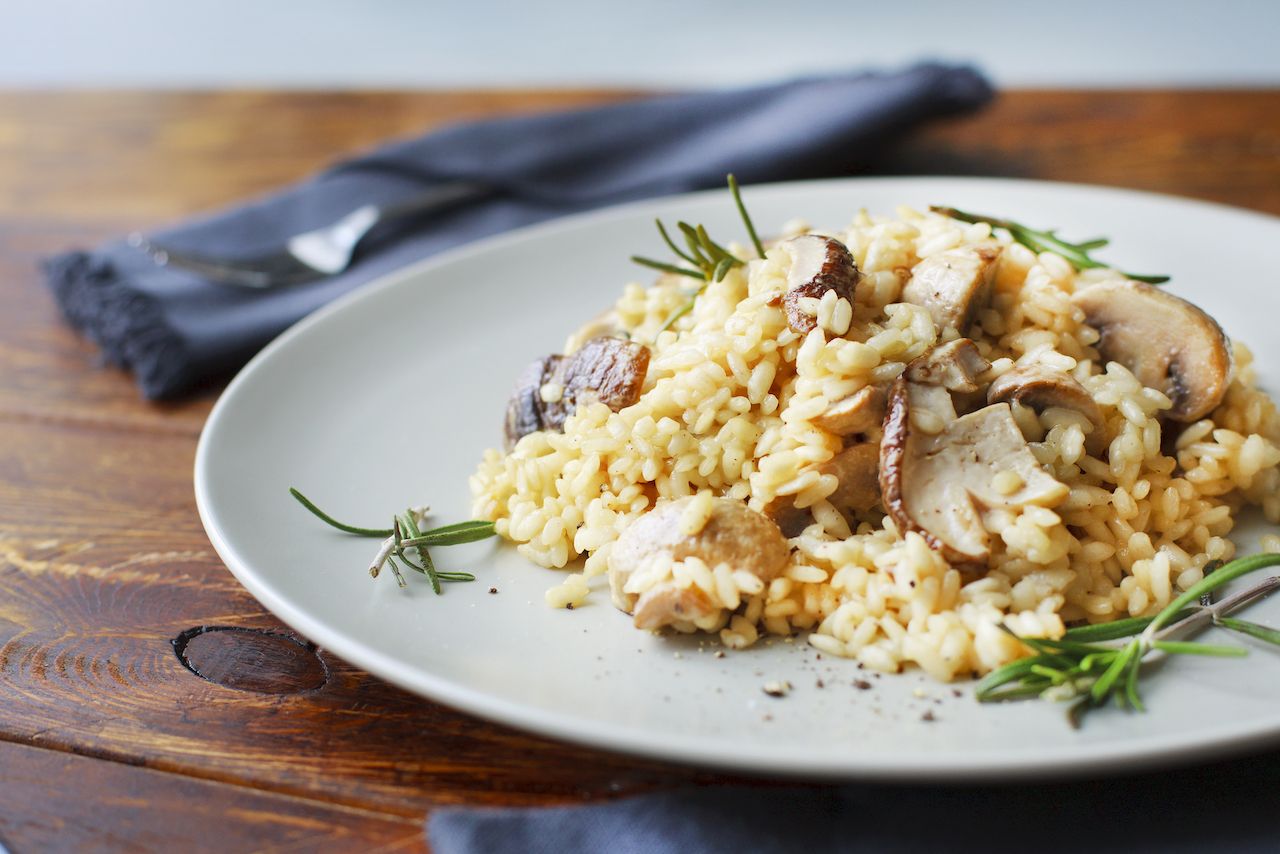 Rice is the key autumn carbohydrate and an ideal foundation for seasonal vegetables. There are several types of rice used to make risotto — arborio and carnaroli are the most common varieties. Baldo, a thick, short-grained variety, is occasionally used, as is the medium round grain vialone nano. Risotto is a good base for earthy fall flavors such as wild mushrooms, truffles, and pomegranate.

Isola della Scala, near Verona, is synonymous with rice and is the area responsible for almost half the vialone nano production in the whole of Italy. This rice is celebrated at the annual Fiera del Riso, which has been taking place since 1966. Alongside inventive combinations like risotto with pumpkin and lambrusco or beetroot and burrata, the festival celebrates the traditional risotto all’Isolana flavored with veal, pork, and hints of rosemary and cinnamon. 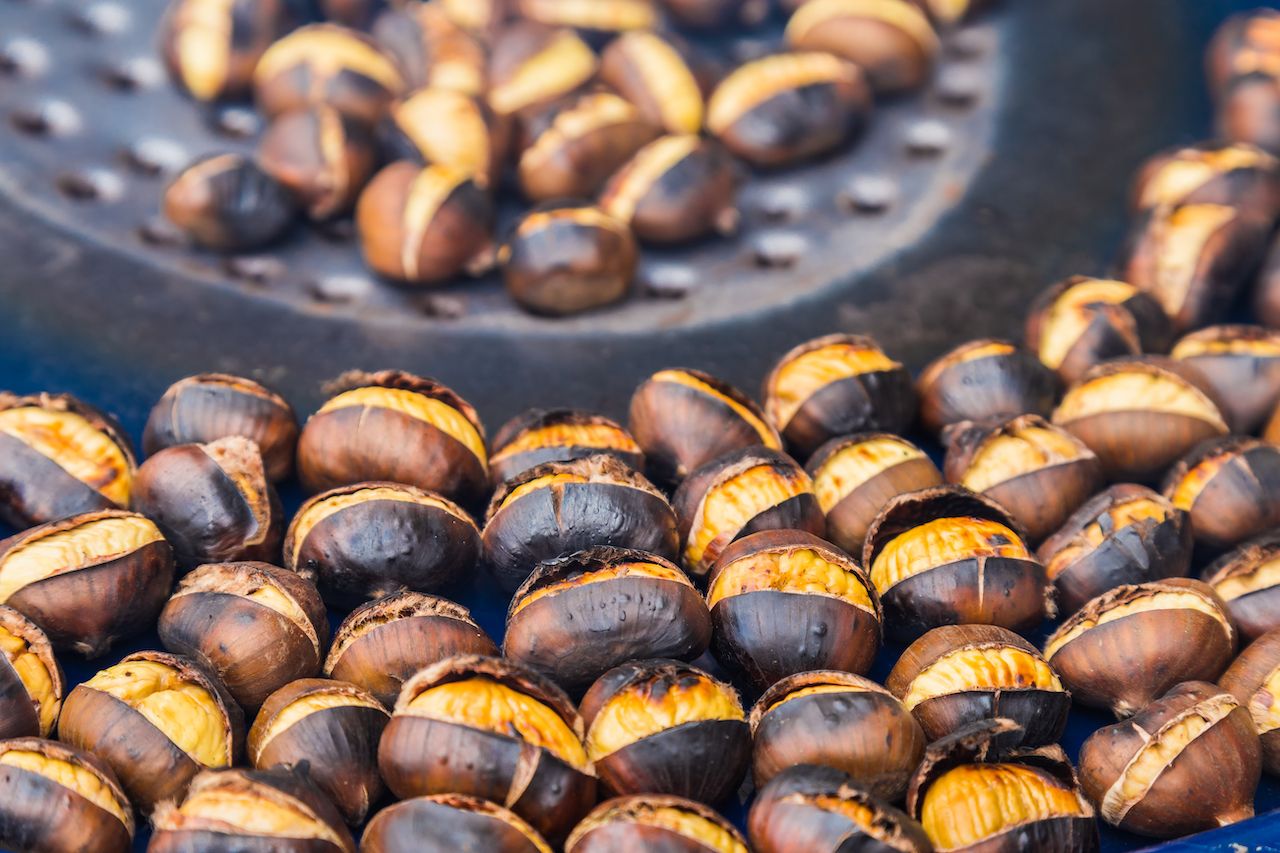 Roasting chestnuts is a street-side autumn spectacle. Big pans of chestnuts smoke in the chilly air over glowing embers. This is among Italy’s most ancient autumnal delicacies. Homer and Virgil both mention the chestnut trees around Rome in their writing. The chestnuts of Mugello, in northern Tuscany, are a particularly sweet variety and are recognized as a protected food of origin by the European Union.

Chestnuts are surprisingly versatile and crop up in risotto, baking flour, and soups. Castagnaccio, for example, is a dense cake made of chestnut flour that’s commonly found in Tuscany and Umbria. Chestnuts even have their own day of fame for San Martino, on November 11, when Italians repeat the saying San Martino, castagne e vino, or “St. Martin, chestnuts and wine.” On this day, it is traditional to eat chestnuts with red wine. In San Martino in Colle, near Perugia, there is an annual wine and chestnut festival in November. 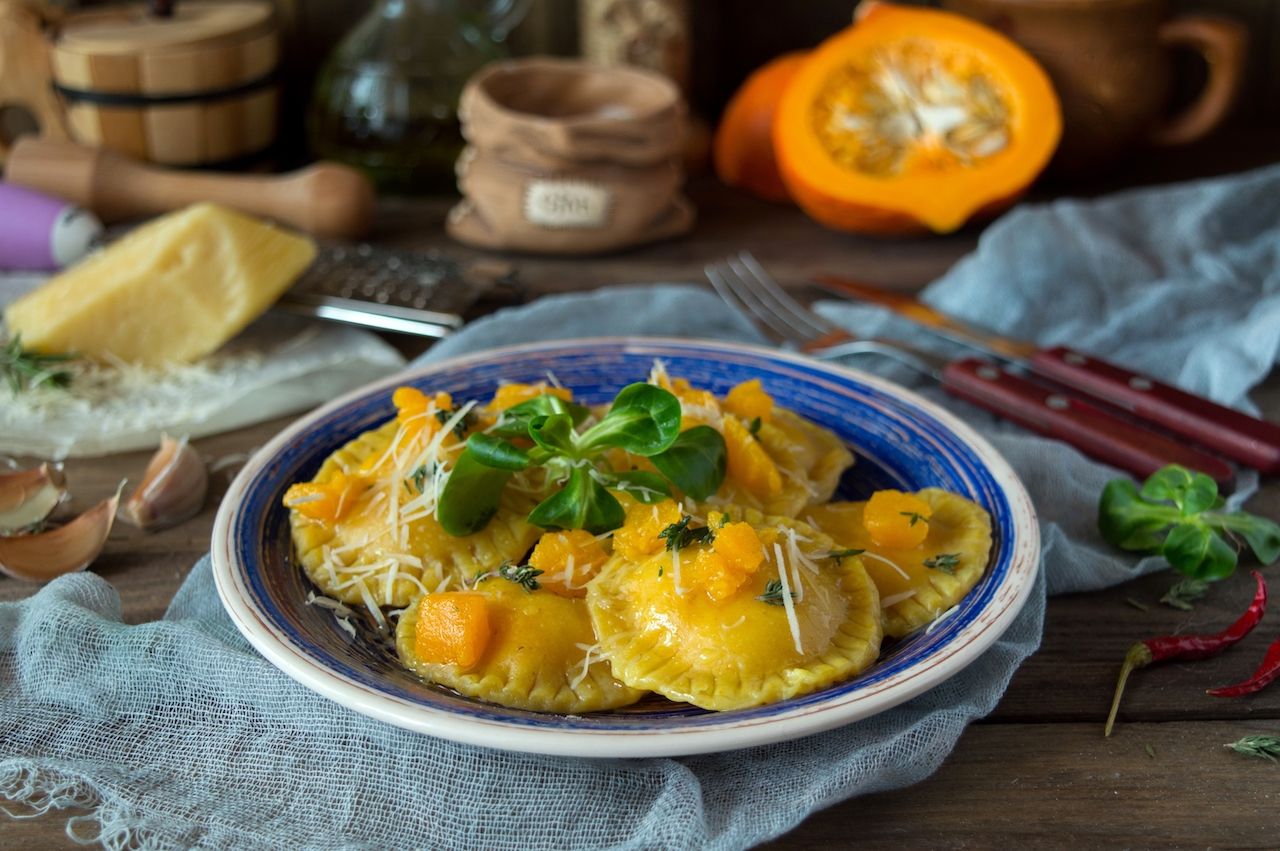 Although the Italians don’t go in for carving pumpkins at Halloween, this season sees many used in cooking. The culinary varieties of the gourd differ from the big orange jack-o-lantern, and include butternut squash and zucca mantovana, which is recognizable by its green mottled skin. One of the most popular ways to use pumpkin is in stuffed pasta, such as cappellacci di zucca that come from Ferrara in Emilia Romagna. These little “hats” of pasta are filled with pumpkin, parmesan, and a little nutmeg, and they’re served with a simple butter and sage sauce or a ragù. There are entire sagre dedicated to this rich pasta, like the Sagra del Caplaz (Ferrara dialect for cappellacci) at Coronella, which claims to be the most ancient festival celebrating this form of pasta. 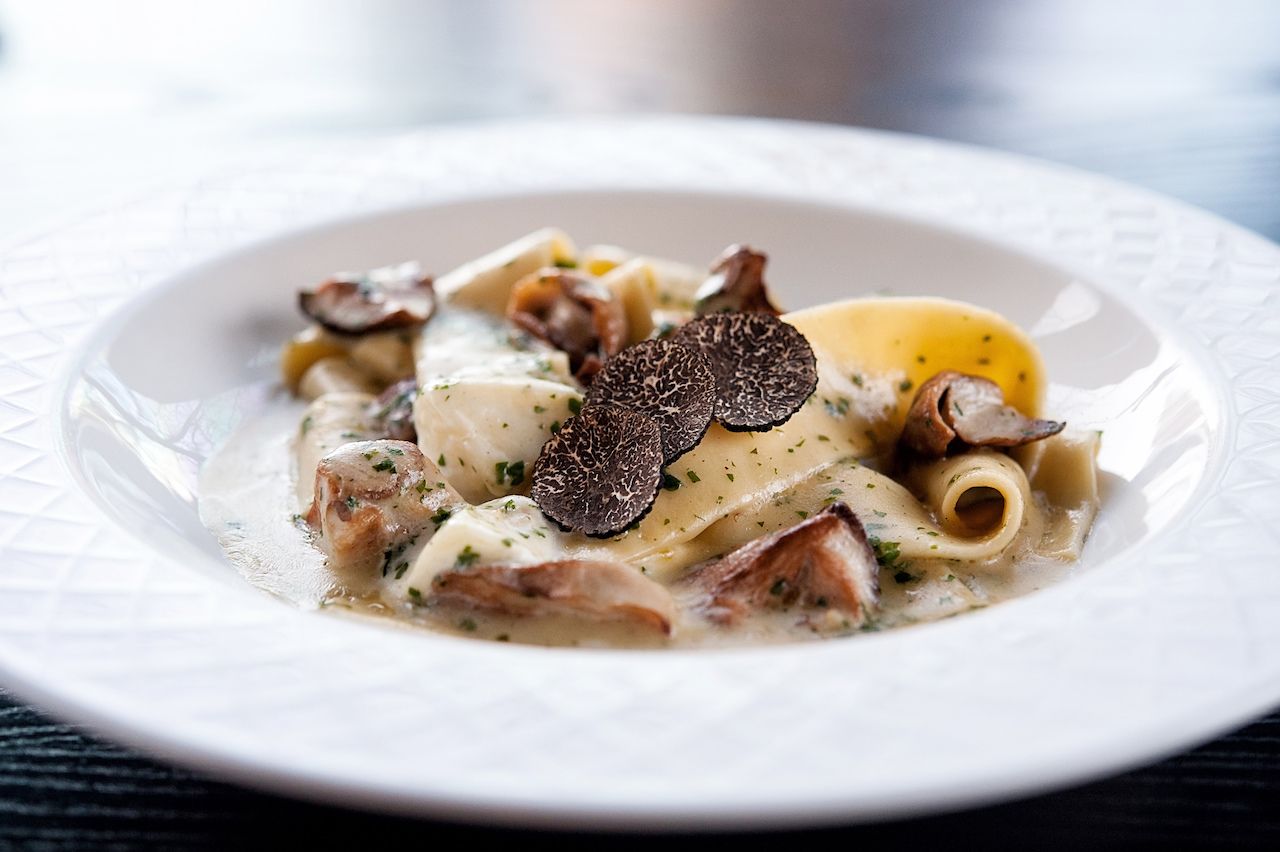 One of the most prestigious and sought-after fall foods is undoubtedly the truffle. This ingredient can sell for thousands of dollars, and just a couple of shavings of this prized fungus can transform a dish. Piemonte and Umbria are key zones for truffles, which are found beneath the soil surface and are foraged by hunters with trained pigs or dogs. The International White Truffle Fair, which celebrates the more highly valued variety of the truffle, is now a well-known event. But smaller festivals celebrating both the white truffle and the slightly less costly black truffle spring up throughout Umbria, Le Marche, and Emilia Romagna during fall. The town of Norcia is a key area for black truffle production, which is being considered for UNESCO heritage status. While Norcia’s truffle celebration occurs in February, Acqualagna in Le Marche, San Miniato in Tuscany, and Sant’Agostino in Emilia Romagna all have popular truffle festivals during fall. 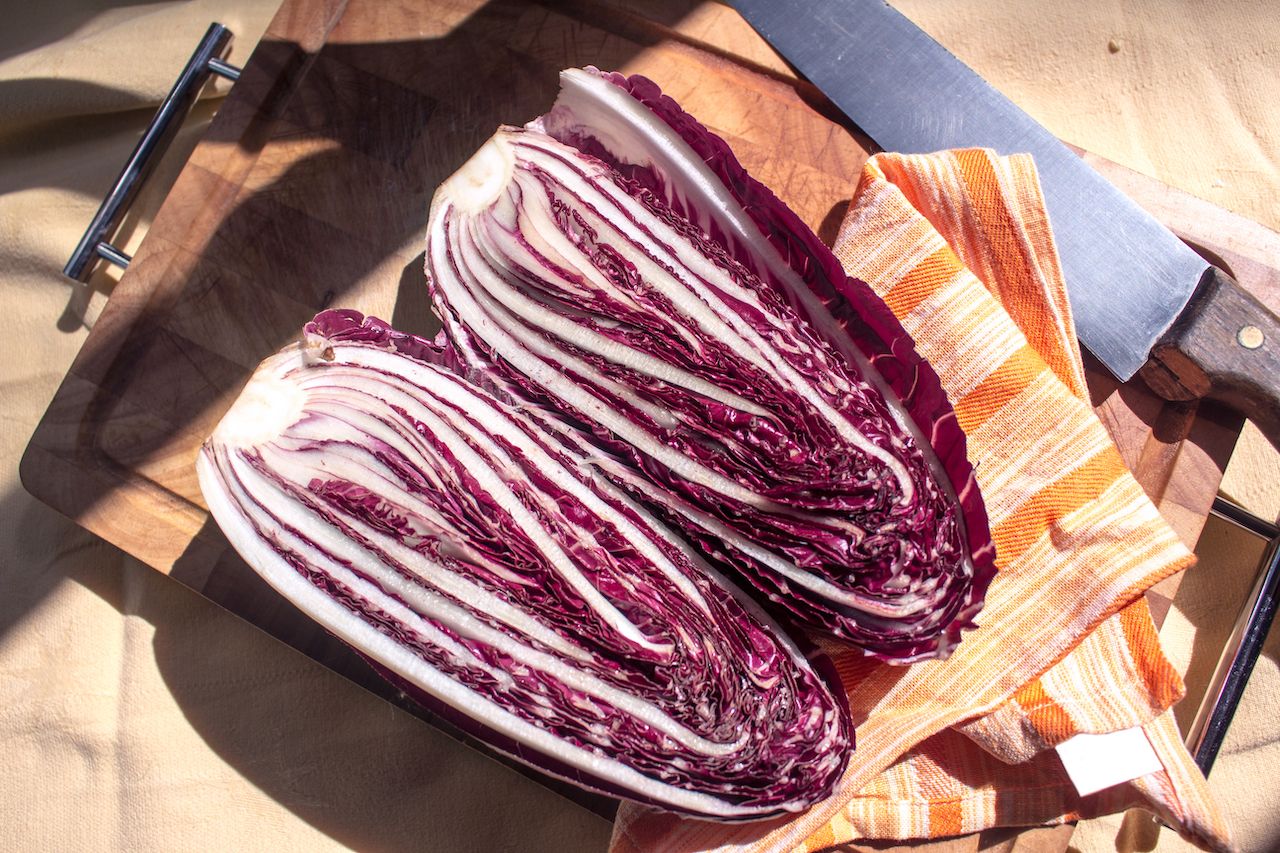 There are many varieties of radicchio (or chicory), but the highest quality come from the northeast of Italy in Treviso, Chioggia, and Verona, and are harvested throughout fall and winter. This purple vegetable is generally quite bitter, but the Treviso tardivo variety has a more refined flavor. It’s sometimes called the “king of radicchio” and is a favorite in the kitchen.

The Treviso, Chioggia, and Verona varieties all have IGP status, meaning the product is only produced in that particular geographic area. Radicchio’s purply-pink hue adds a splash of color to all sorts of dishes, including salads, risotto, pasta sauces, and soups. But it is also commonly eaten grilled and topped with olive oil and balsamic vinegar. The Treviso variety is celebrated in Dosson, and that of Verona in Casaleone. 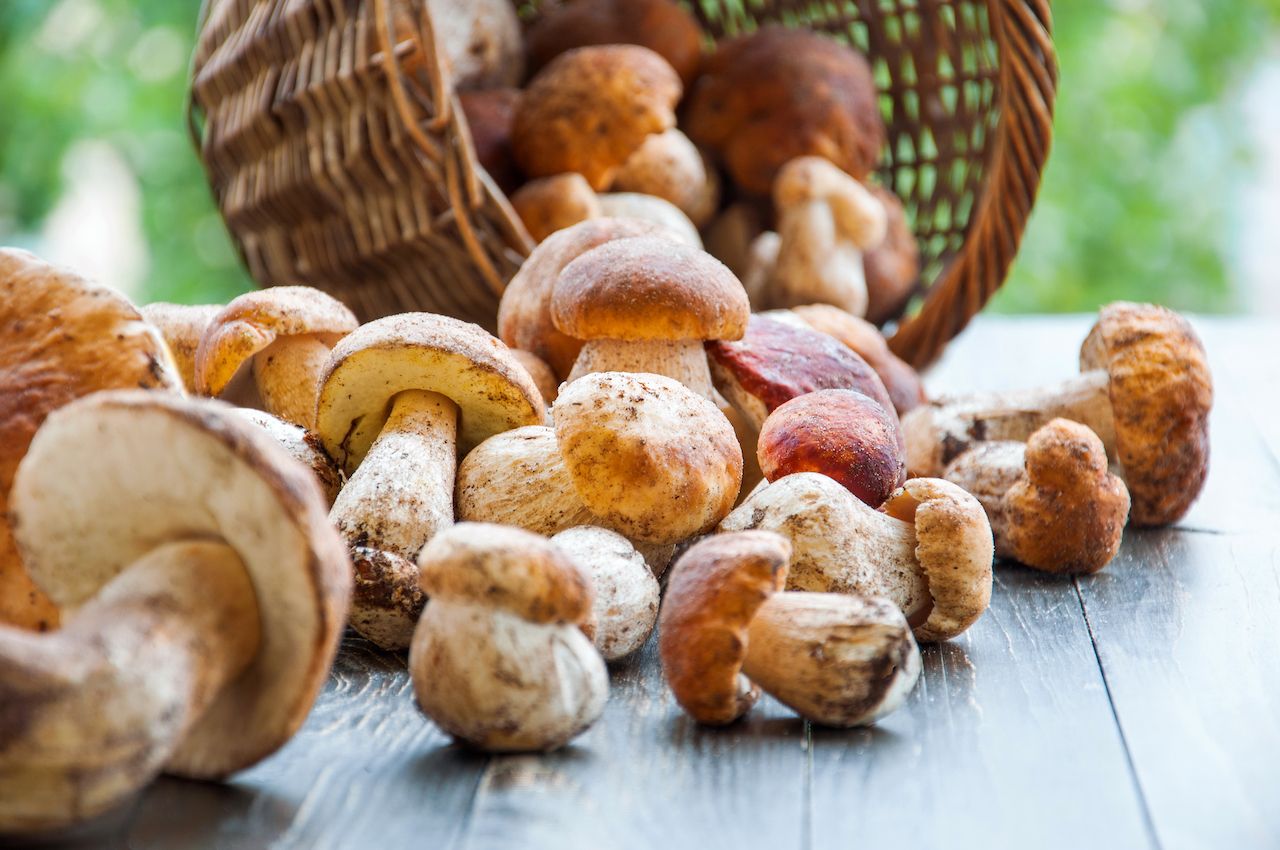 Photo: All for you friend/Shutterstock

Porcini mushrooms pop up briefly in fall and grow throughout the hills of central and northern Italy. These are a wild mushroom, not cultivated, so if a restaurant is advertizing fresh porcini, you can safely assume they’ve foraged each one. This is a substantial mushroom, meaty and with a powerful earthy flavor. In the north of Italy, these mushrooms are a classic risotto ingredient. Porcini can also top pasta or crispy bread for a starter, but they are probably best sampled alone as a contorno (side dish), grilled or fried. As the production area is relatively wide, there are sagre to be found all over central and northern Italy. Festivals take place in Albareto near Parma, Giaveno in Piemonte, Cortona in Tuscany, and Lariano near Rome. 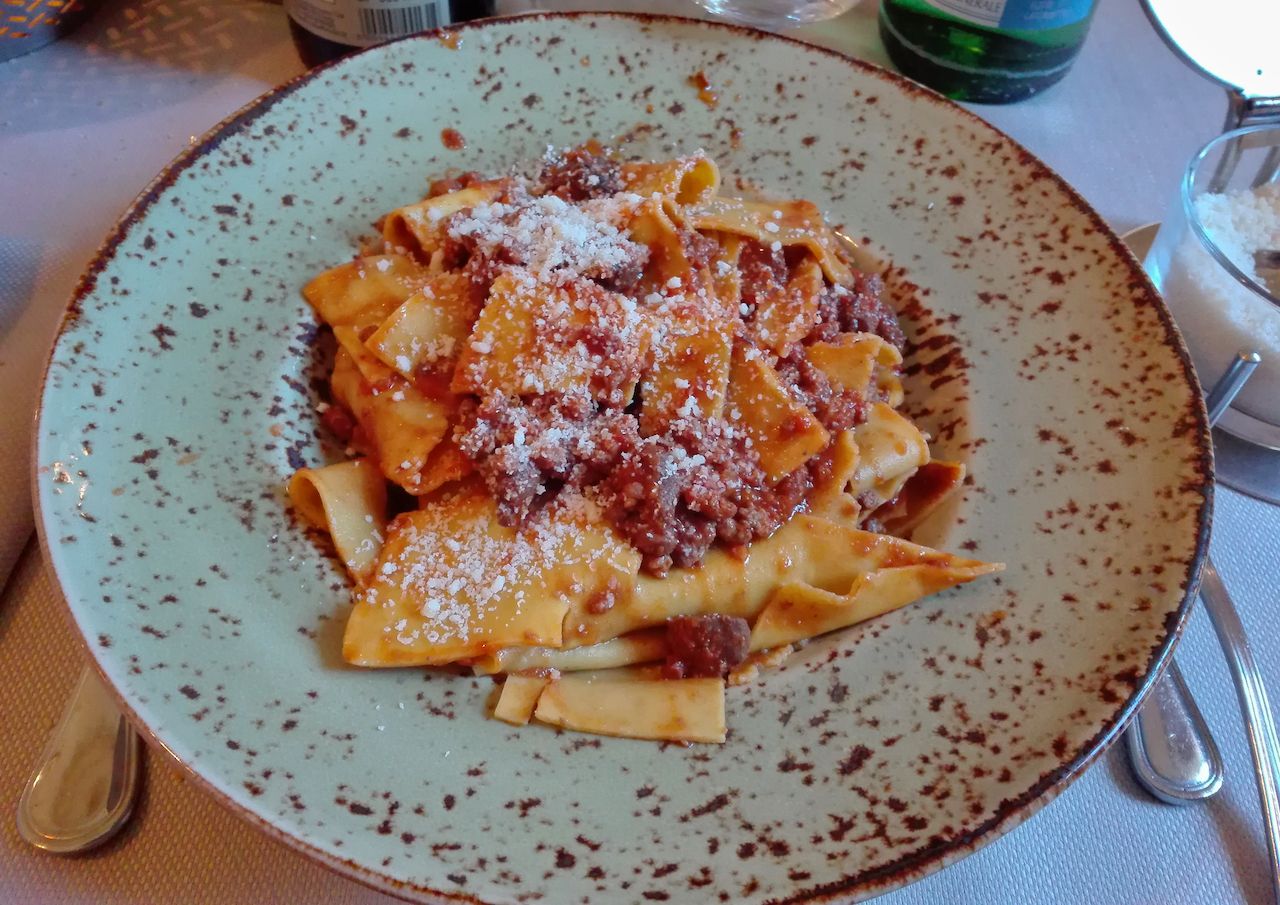 With fall comes hunting season, so savory game meats like venison, pheasant, and duck are on the menu. One particularly traditional game meat is wild boar, or cinghiale, which is usually used in rich ragù sauces or stuffed inside ravioli. Tuscany is a prime area for cinghiale and its derivative dishes, but despite the boar’s revered status in Florence, they can often cause severe damage to vines and other horticulture.

Many Tuscans prefer to eat the animal in the form of rustic pici al ragù di cinghiale. Pici is a type of thick spaghetti, traditionally hand rolled, and typical of Tuscany. The other common pasta base for cinghiale ragù is pappardelle, a wide flat ribbon pasta. Cinghiale can be sampled at the sagre in the medieval town of Capalbio, in Carmignano, and in Selvatelle where you can also feast on hare cooked similarly as a pasta sauce or in a rich stew. 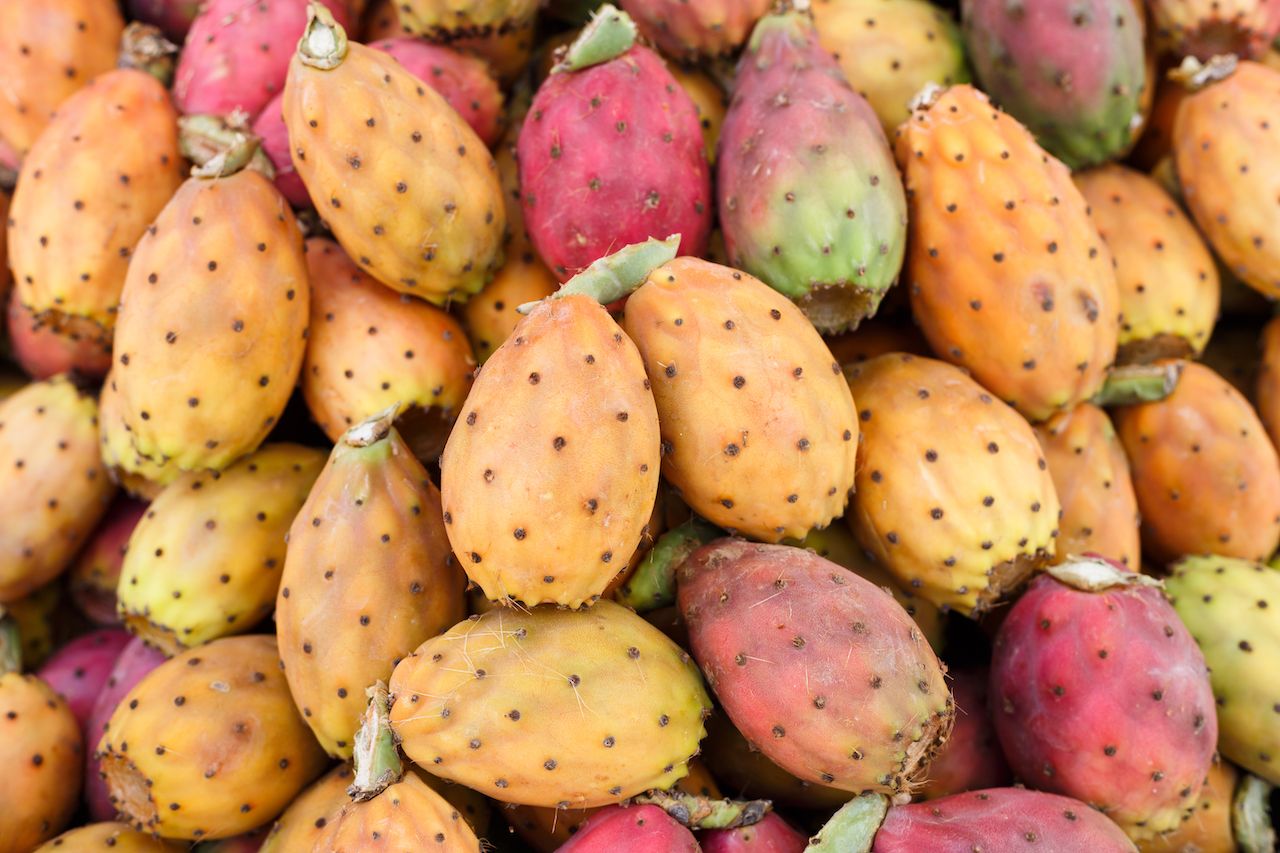 The north of Italy has a wide variety of seasonal foods, and food festivals are more of a northern tradition. However, the south of Italy has favorite fall foods, too. One standout product is the prickly pear, known in Italian as fichi d’India, or Indian figs. After carefully removing the spiky skin, you can eat the bright pink interior flesh. Alternatively, prickly pears can be made into jams and combined with prosciutto or cheese for aperitivo hour. They can also be found in Sicily, where the arid ground and warm climate is favorable to the prickly pear’s growth. The island celebrates this fruit with several sagre, such as in Alimena, Roccapalumba, and San Cono, the self-identified capital of prickly pears.