Most people already familiar with wine know that the Finger Lakes, in upstate New York, is one of the best places in the United States to go wine tasting. But what people might not know about this region is that it offers abundant opportunities for outdoor adventure and exploration of sites central to American history and progress.

The region encompasses Ithaca, Seneca Falls, Geneva, and Rochester, among many other small towns, as those 11 lakes that it’s named for. Every type of explorer looking to spend warmer weather days outside and in nature will find something to do here: There are parks galore, many of them lake-front, for casual strolls and picnicking, forested hiking trails, cascading waterfalls nestled within the bigger state parks, and crystal clear swimming holes. Pack the family into the car because there is enough to do outdoors in the Finger Lakes, New York to fill a whole weekend of discovery and play.

Once your family has dried off in the sun or replaced their hiking boots with more casual attire, head to one of the Finger Lakes historical sites to learn about farm life in the 19th century, the suffragette movement, and even the Civil War. There’s just so much to do in the Finger Lakes, there’s so much to learn.

The car ride might not be short – it’s about a 4.5-hour drive from New York City to Seneca Lake, for instance – but it’s worth planning a weekend getaway to this pastoral region, where there is much more to do than drink wine. You can spend the weekend hiking and touring museums, then get back to the city feeling refreshed.  Here are 16 stops in the Finger Lakes, New York to add to your itinerary.

Where to swim and hike in the Finger Lakes, New York 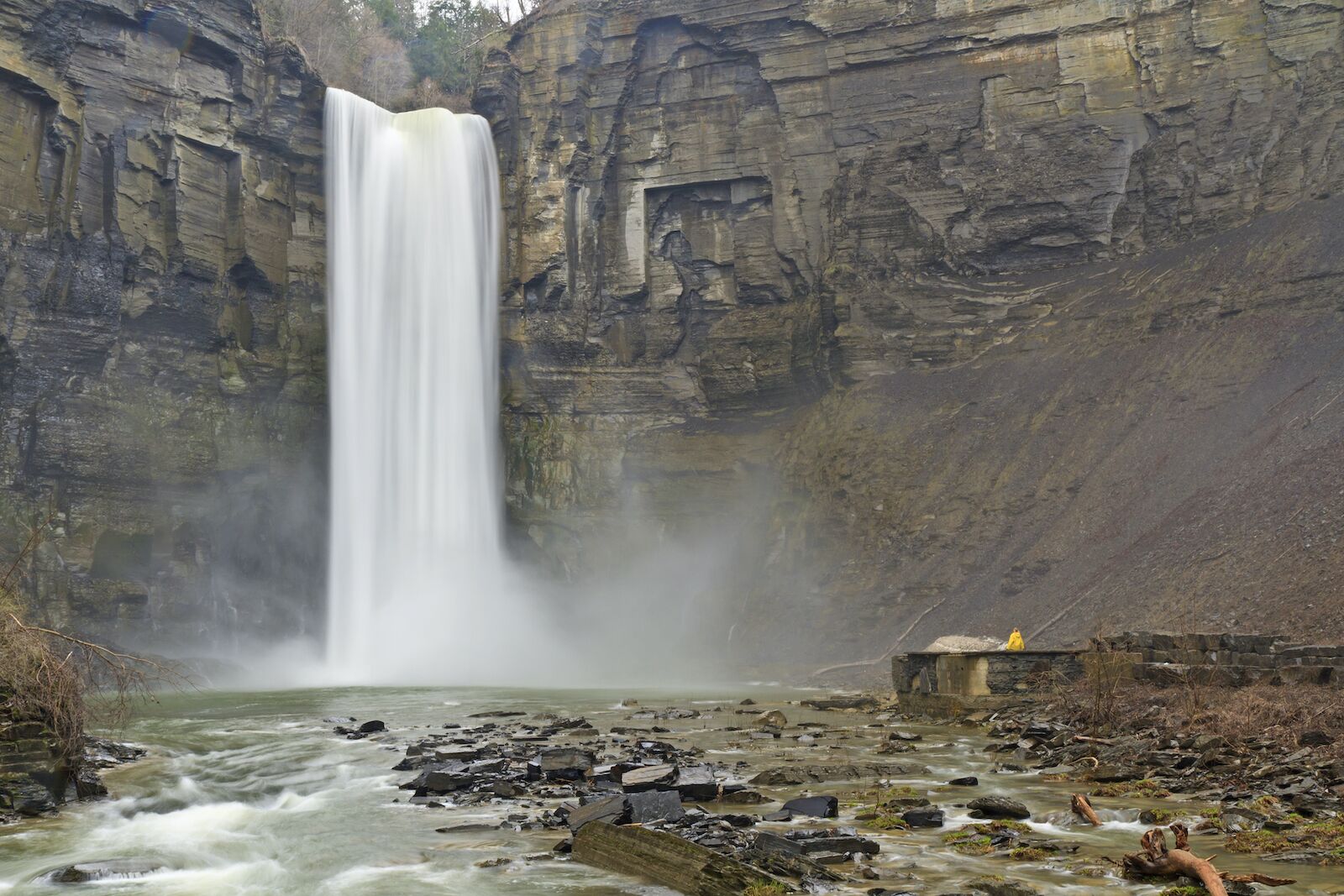 This 750-acre state park in a town called Ulysses culminates in the magnificent Taughannock Falls. Misty water cascades 215 feet down the rocky cliffside, and while this is a must-see attraction for day-trippers to the Finger Lakes, the state park also offers a nearby beach, campground, a multitude of hiking trails, and a marina for boating.

Located near Honeoye Lake the Sandy Bottom Nature Trail runs through grassy wetlands. Here, visitors, who traverse a raised boardwalk, can spot mink, muskrat, otter, and frogs. Birding is also a popular activity along the trail. The easy hike is perfect for families, and the trail leads to Sandy Bottom Park Meadow, where deers can frequently be spotted feeding on the tall grass. 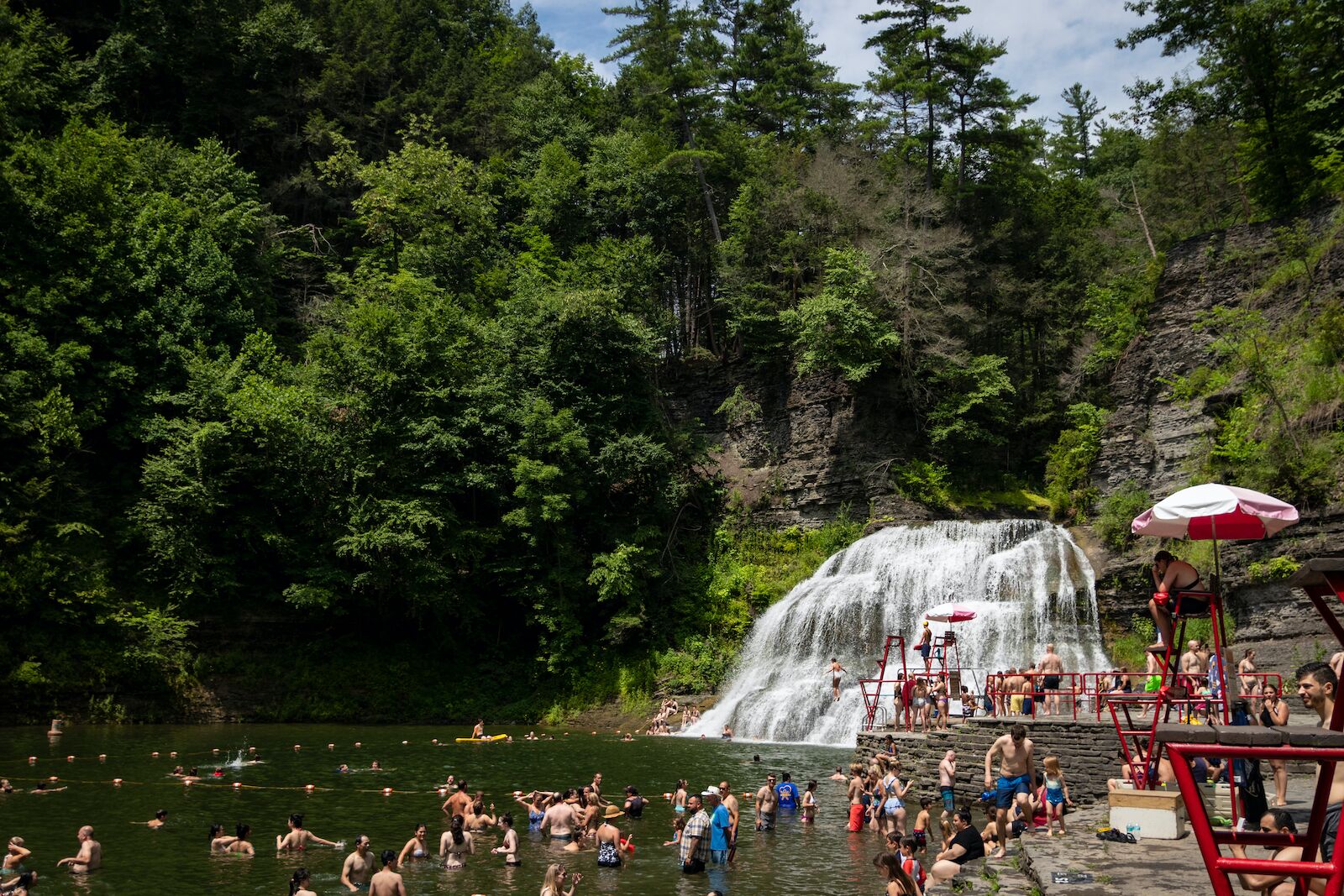 Trails in this state park have ominous names like Lucifer Falls and Devil’s Kitchen, but the gorges and wooded trails make it one of the most family-friendly and popular in the Finger Lakes. A pristine pool beneath Enfield Falls (the park’s lower falls), which serves as a natural swimming hole is attended by a lifeguard in the summer – and surely the biggest draw to this park, so don’t forget your swimsuit. 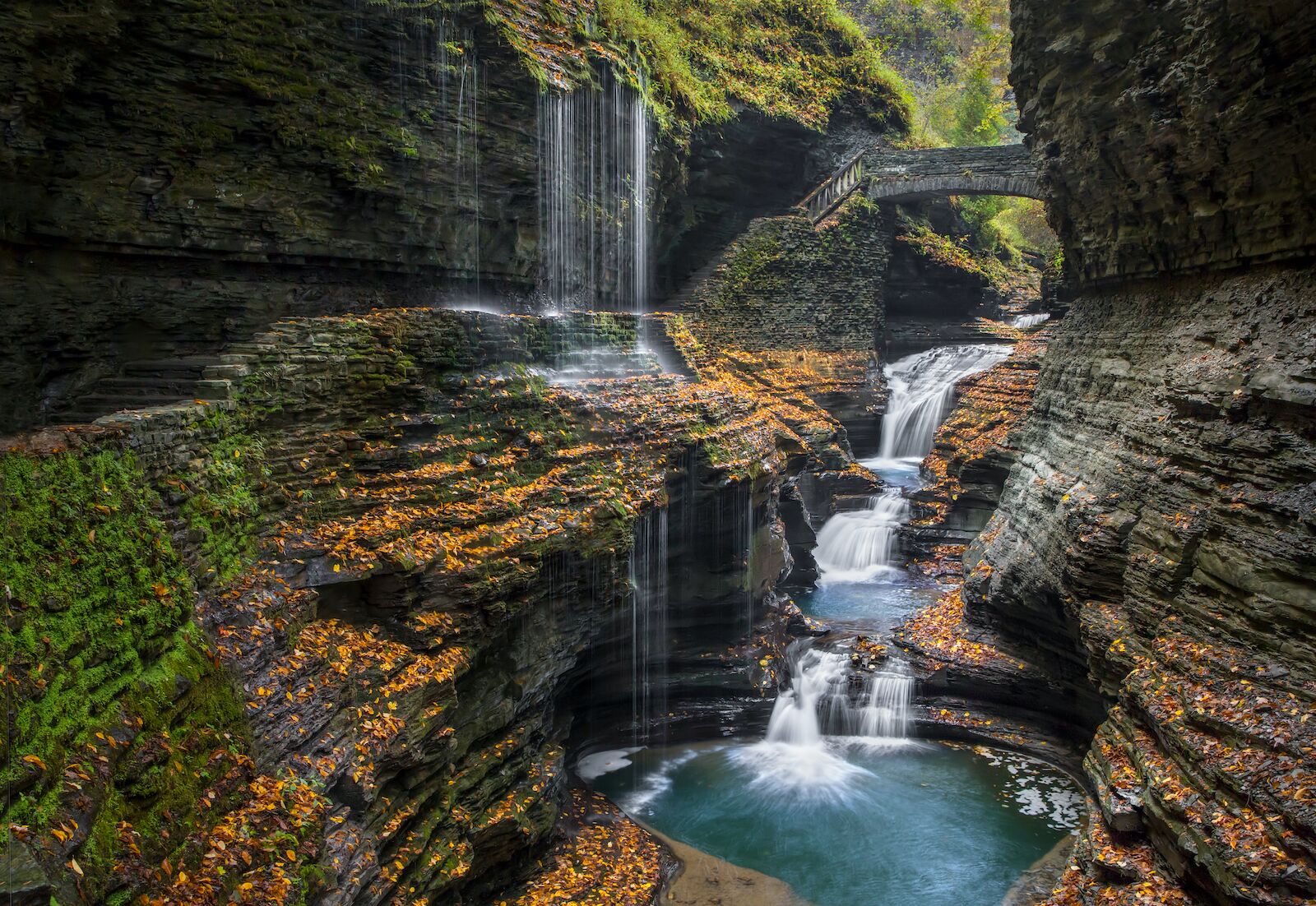 Inside Watkins Glen State Park, hikers will find what is sometimes called the “crown jewel,” of the Finger Lakes region, Rainbow Falls. Following man-made stone staircases along the Glen Creek gorge trail will lead you to nineteen waterfalls falling down the gorge.

The site of the oldest fossilized tree in New York State, Grimes Glen is also known for its three majestic waterfalls (the third of which can only be reached by experienced hikers). This is a great spot not just for hiking but swimming, too: Pools of cool water have formed throughout Grimes Creek, where hikers like to soak. 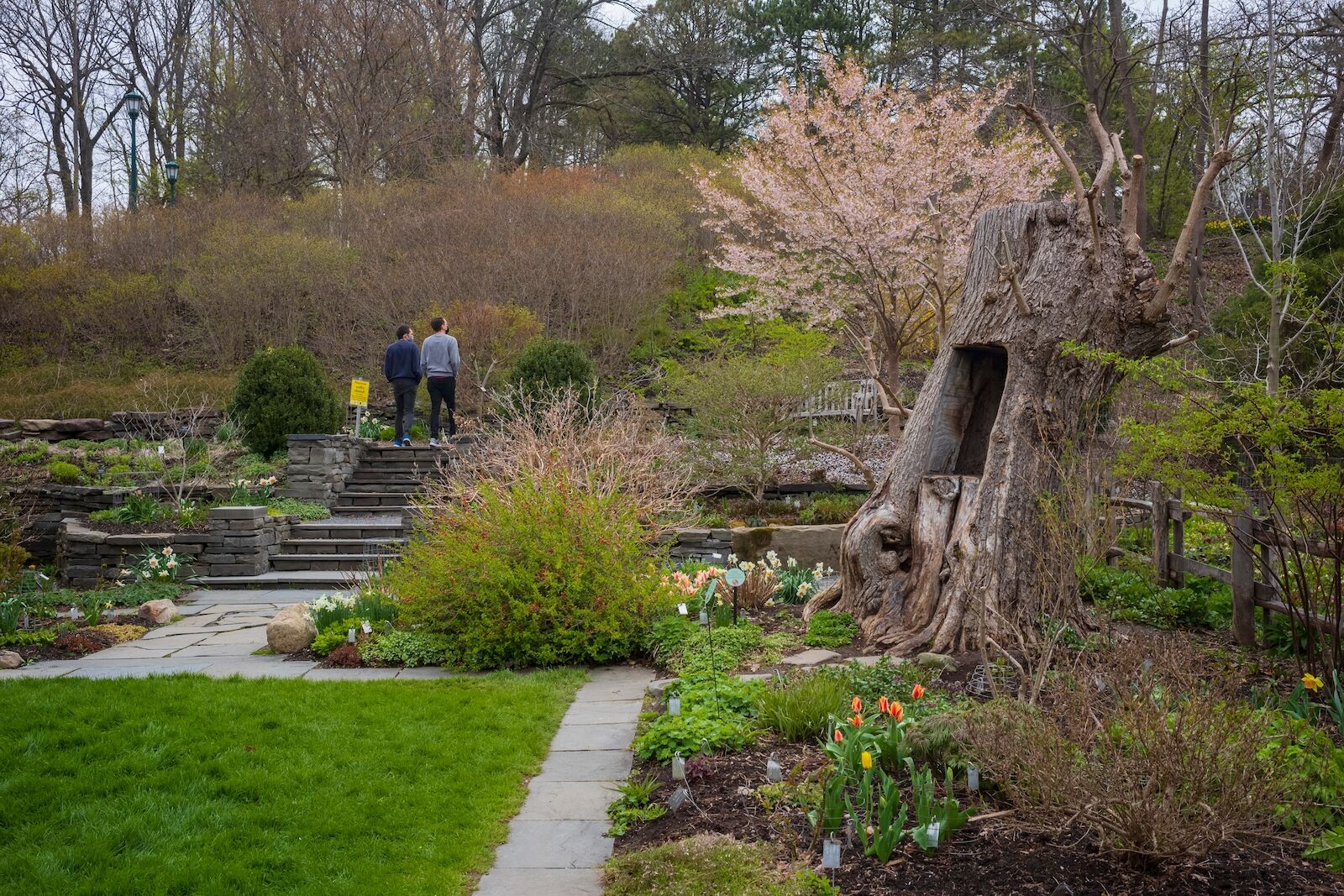 Outdoor gardens and woodland trails make the Cornell Botanic Gardens a must-visit destination for a relaxing stroll through nature. The gardens alone pathways lined with a diverse fauna, from herbs, wildflowers, pine trees, tulips, rhododendrons, and much more, but there are also 11 more “natural areas” scattered throughout the Cornell campus that are worth exploring.

Where to experience history in the Finger Lakes, New York 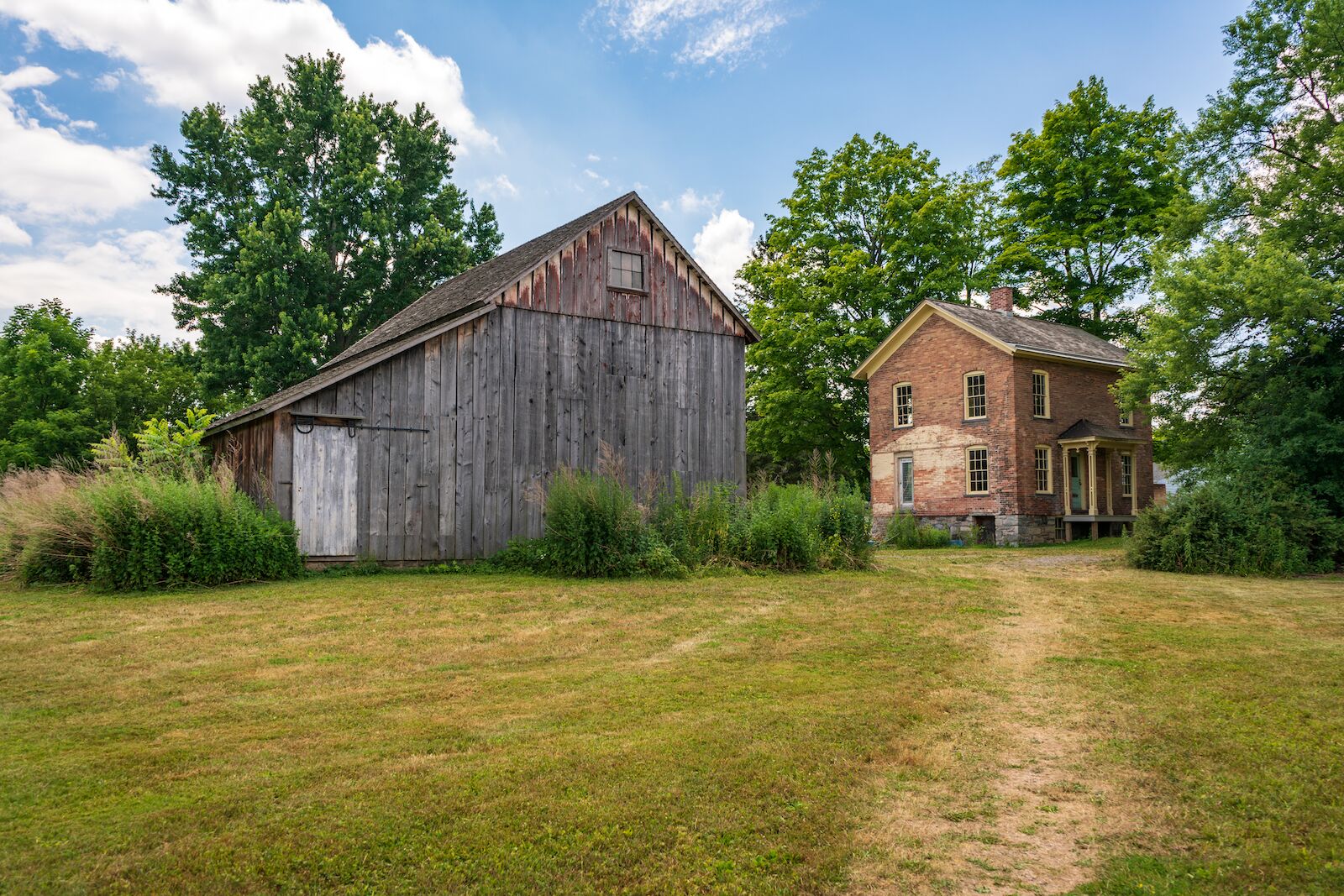 Located on the site of Tubman’s family home and farm, visiting this national park is a powerful and moving experience, as well as an informative one. The Thompson Memorial African Methodist Episcopal Zion Church, which Tubman raised the money to build, is also located within the park. Although her home is only visible from the outside, the Tubman Home for the Aged, where she lived until her death, is open for guided tours.

This town is a shrine to America’s colonial past. If you’re a history buff, it’s worth stopping by the Geneva History Museum which features historically accurate furnished rooms from the 19th century. Then, at nearby Rose Hill Mansion, learn about how the 20-room home and former working farm survived this tumultuous period through the letters, photographs, and diaries of the Swan family. 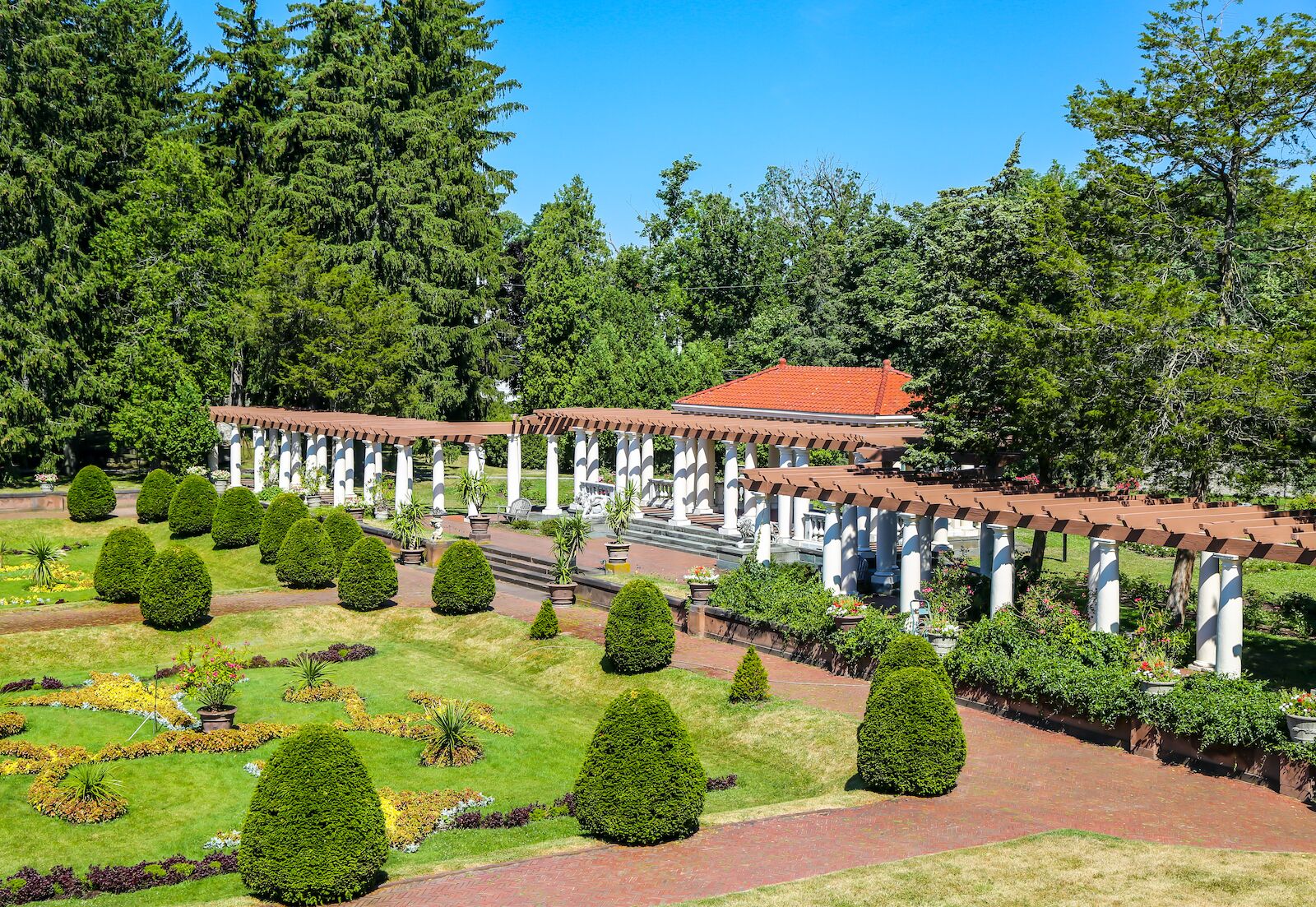 A Queen Anne Victorian-style mansion, one of the few left in the country, and pristinely manicured gardens draw visitors from all over the country to Sonnenberg. There are 13 different gardens to explore on the property – some inspired by Japanese and Italian design. A dilapidated former bathhouse, once lined with blue tile, is also open to visitors – as are three floors of the mansion, including the original residents’ master bedroom, dining room, and library. 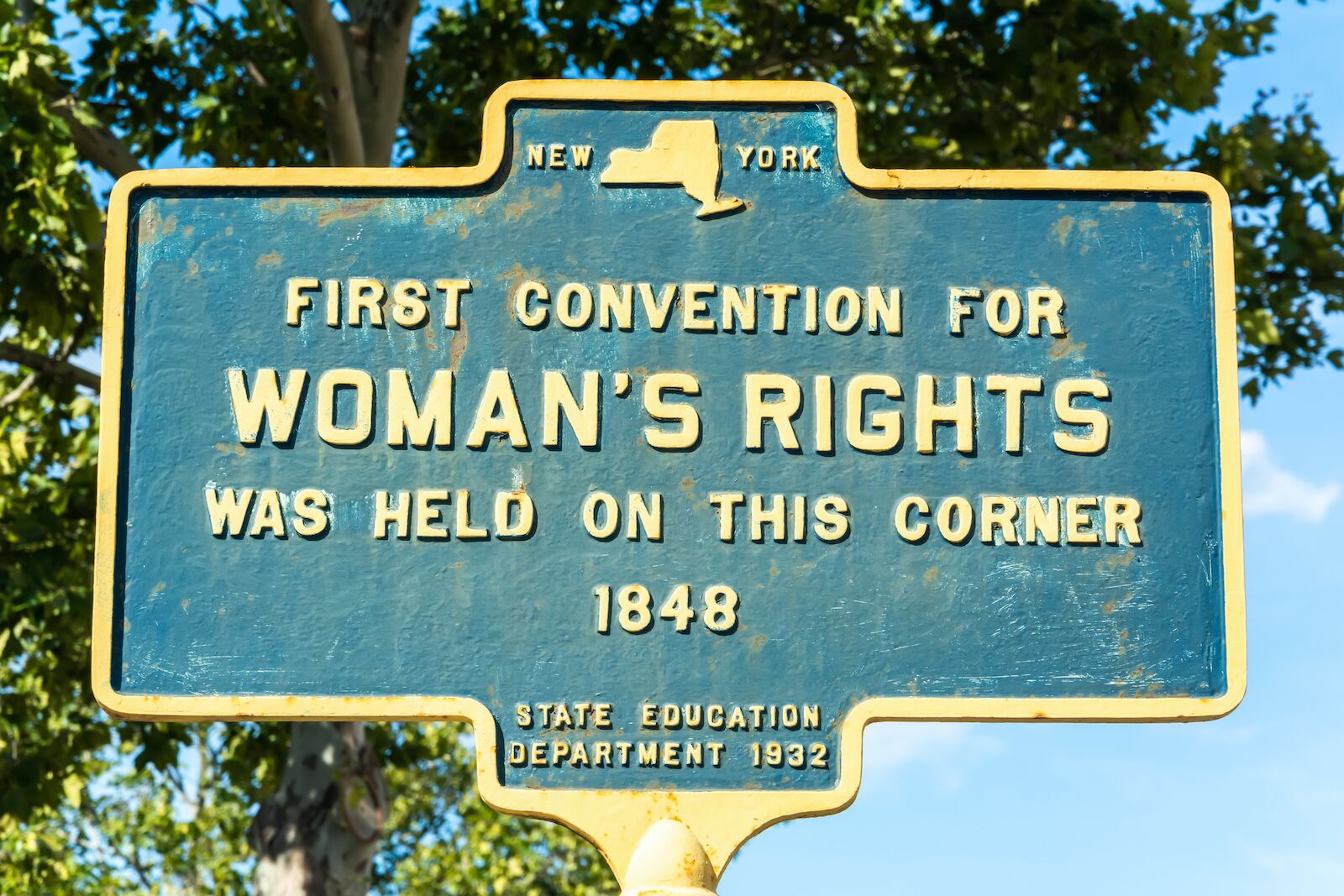 Where to shop and eat in the Finger Lakes, New York 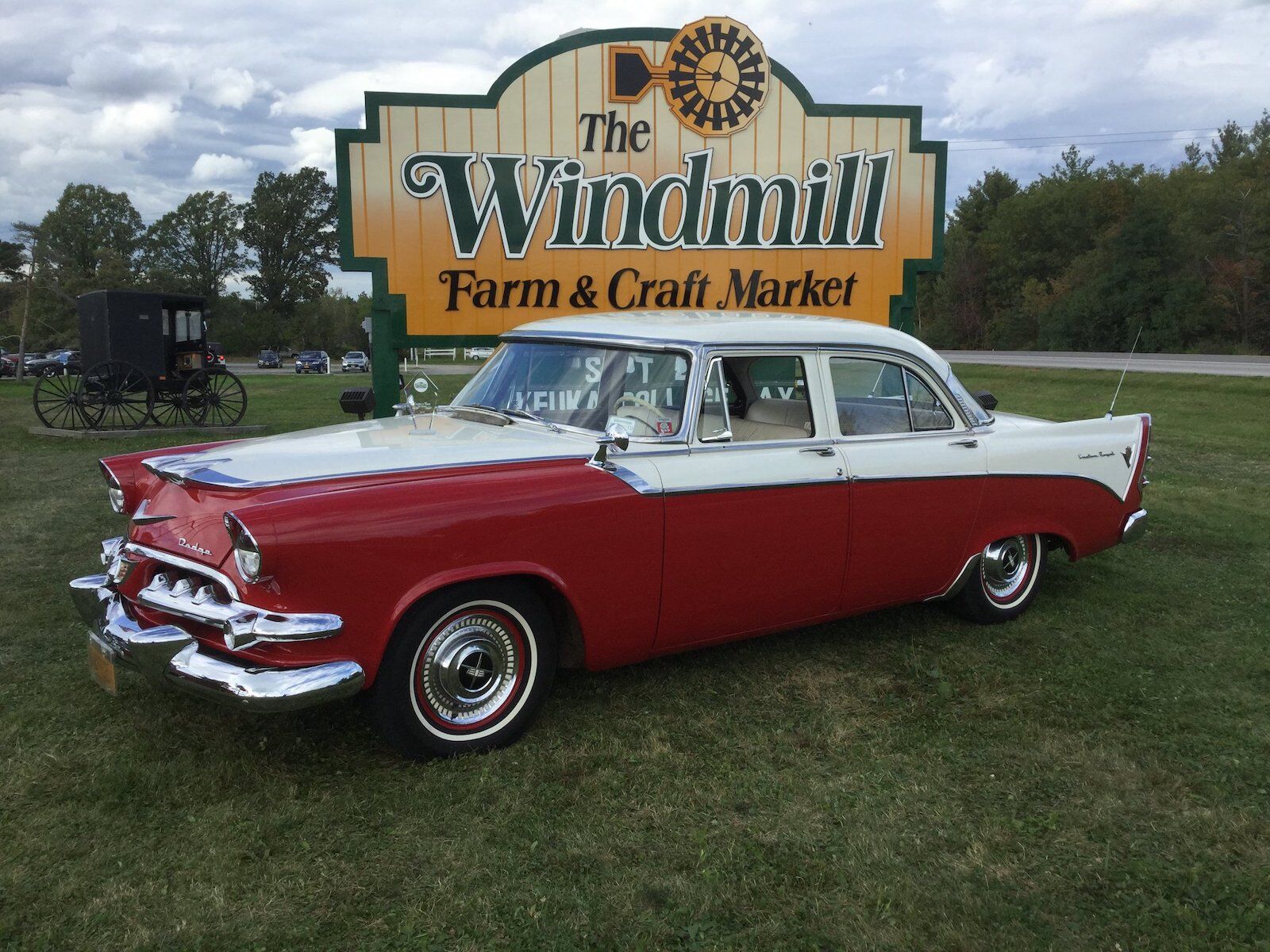 This cozy restaurant in Skaneateles specializes in fried fish and hot dogs. The fried fish sandwich is especially good, and tartar sauce and coleslaw are all by hand, in-house.

Home of the legendary, have-to-try-it-for-yourself-to-believe-it Garbage Plate – either cheeseburger, hamburger, or Italian sausages mixed together with macaroni salad, French fries, baked beans, and onions and pilled well together on the same plate – Nick Tahou’s Hots is a Finger Lakes institution. Well known as a hangover cure, Garbage Plates are served alongside milkshakes and fries at this tiny Rochester outpost.

Located near Penn Yann, this combination indoor and outdoor market houses around 175 shops. You could really spend your entire day wandering around Windmill, sampling local wines, shopping for handmade garden gnomes and birdhouses, and snacking on nearly everything you can imagine from kettle corn to frozen custard to pierogies and barbecue.

Though Schaller’s is technically a chain (there are three locations) people from the Finger Lakes will tell you why it’s so beloved: Simple but delicious burgers and hotdogs and thick shakes in a classic drive through atmosphere make for a family-friendly, inexpensive but satisfying meal.

Nestled within the idyllic countryside outside Rochester, Lincoln Hill Farms offers platters of barbecue chicken, pulled pork, and roasted pork from its smokehouse. The farm is a popular wedding venue too, but also hosts events like concerts and its available for glamping stays, too.

Epic StaysHow To Make the Most of a Weekend Trip To the Catskills on a Budget
Tagged
Outdoor Travel New York, United States
What did you think of this story?
Meh
Good
Awesome