When I was 14, the food at Club Med was the greatest thing I’d ever seen.

Instead of the plates of carefully placed organic spinach salad and tabbouleh I was used to at home, I found endless bowls of spaghetti tossed in beef-filled tomato sauce. I had whole pizzas I could just take. Trays of cookies. A guy who’d cut me all the prime rib I wanted.

Seconds? Try ninths. My sister and I would compete to see who could eat more, piling each plate a little higher than the last. If I hadn’t been 14, I probably would have gained 30 pounds.

My parents, however, weren’t quite so excited. I remember lots of sad-looking salads and half-finished meat, with my dad mumbling stuff like, “I guess these French guys never learned how to grill.”

I never got it, but as I got older it made sense. All-inclusive food was designed for people who like large quantities of mediocre food, perfect for the teenage demographic. Not so great for grown-ups. But the Information Age has allowed people to improve their culinary tastes — demanding higher quality everywhere from neighborhood restaurants to Taco Bell — and now all-inclusives must do more than just put out enough chicken primavera to feed a wrestling team.

The internet creates a new generation of foodie-focused resorts. 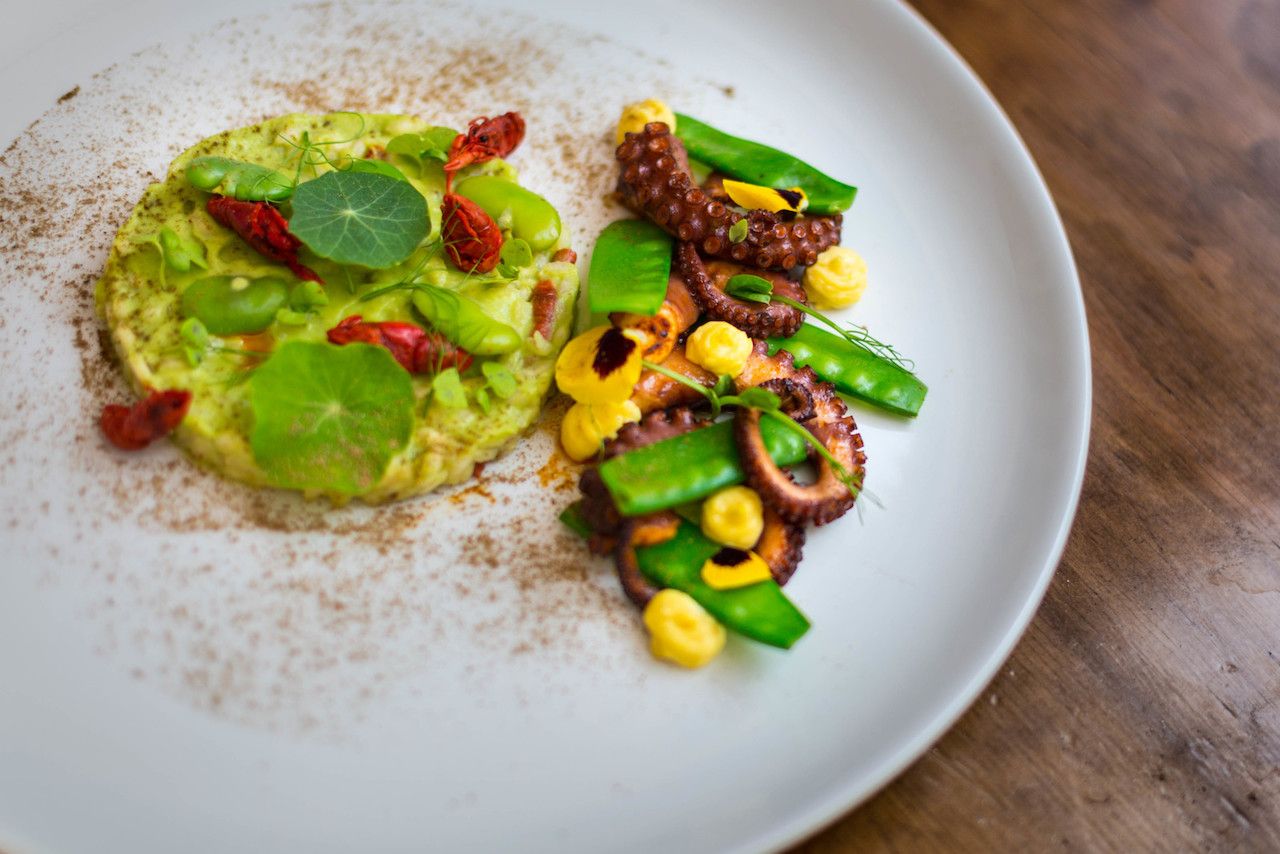 “The access to the internet and more people traveling around the world was a breaking point for us,” says Chef Michel Mustiere, the culinary director at Velas Resorts, a collection of all-inclusives in Mexico. “People now are more demanding, and cuisine is a highlight and a way to connect with local culture. Foodie vacations and food experiences are growing, so we have to develop (a more) exclusive program.”

Velas might be the most extreme example of an all-inclusive going gourmet. Many of the restaurants at their resorts are the kinds of places you might only go on vacation for a special occasion. Places you’d likely drop $250-$300 a person for the privilege.

At Grand Velas Los Cabos, an eight- to 10-course tasting menu at Cocina de Autor comes to you from two-Michelin-starred chef Sidney Schutte. It’s also included in your nightly rate. The original Cocina de Autor at Grand Velas Riviera Maya was the first AAA-5 Diamond restaurant at an all-inclusive.

The resort also puts on an annual gourmet food festival at its resorts in Puerto Vallarta and Riviera Nayarit, where chefs from all over Mexico create a resort-based week full of tasting dinners, gourmet experiences, and grand tastings with free-flowing tequila. These weeks have become destination foodie vacations on par with New York’s Restaurant Week and the South Beach Wine and Food Festival.

The king of all-inclusives sets the industry bar high. 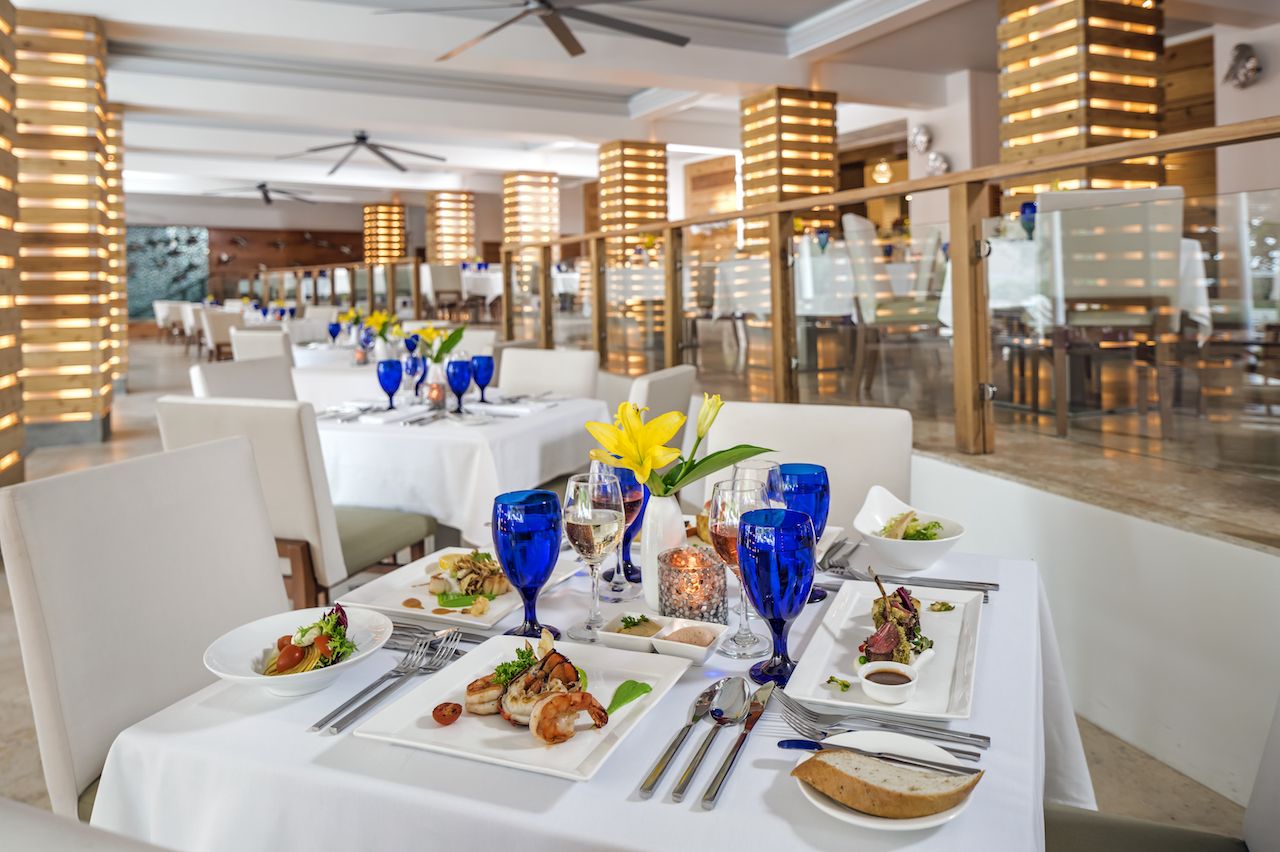 The move toward high-quality food isn’t exclusive to the luxury sector, though. Sandals — the icon for mass-produced, sit-on-the-beach-and-do-nothing vacations — revamped its food program a couple of years ago to dispel its often-unfounded image of being a chain restaurant with lounge chairs.

The brand launched its 5-Star Global Gourmet program about two years ago, opening stand-alone restaurants at its resorts that feel more like the slightly Americanized ethnic restaurants you might find in your neighborhood. The company uses established restaurant consultants (California restaurateur Travis Kaenyama helped develop the sushi and teppanyaki concepts) and expat chefs to bring more authentic flavors to its restaurants. Malaysian and Filipino chefs run the show at the pan-Asian Chi. Indian chefs helm the Indian offering Bombay.

Because Sandals, like any large-scale enterprise, trades in mass production and consistency, the consultants and chefs work together, sometimes for months at a time to ensure that everything comes out exactly as intended. Corporate trainers spend all but about 60 days of the year on the road ensuring the food is up to par. The quality checks, especially on such a large scale, are remarkable.

“If you pay what you pay to come here, you expect quality,” says Sandals Barbados Assistant Food and Beverage Manager Junior Plummer. “I don’t think the expectation was low, but you do have people now who haven’t been to Sandals before who are pleasantly surprised by what we do.”

Are the restaurants actually good or just better than we expected? 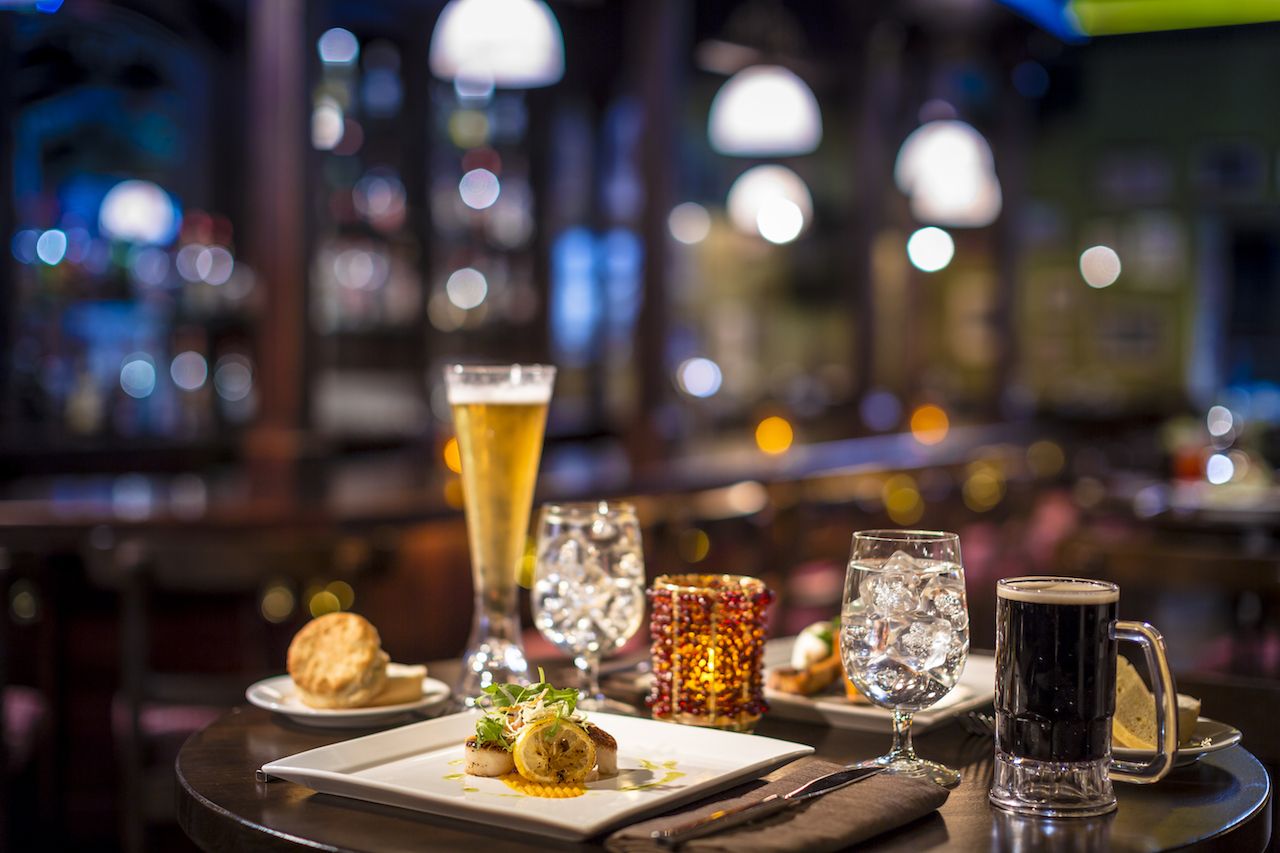 There is, of course, a large chasm between a restaurant being great and being great for an all-inclusive. Keeping this level of cynicism in mind I took upon the laborious task of spending a weekend in Barbados at the new Sandals Royal, trying every one of its restaurants to see if they were good or just the benefactors of low expectations.

From a décor standpoint, the restaurants nailed it. Each restaurant incorporated the nuances and details that make its off-resort counterparts so special. The koi-pond and blue-neon walkway to the teppanyaki concept Kimono felt like walking to a birthday dinner, as did the joyous noise and thick layer of spicy, greasy steam once you walked inside.

The booths at Butch’s Steak and Seafood were oversized and plush, and even a little sticky after a full shift of steak service. It smelled like that perfect combination of raw bar and raw meat you’d get at Smith and Wollensky or Lobster Bar.

Sandals even nailed the décor of a traditional English pub at the Merry Monkey, with pitched brown beams holding up the roof.

“They’re still missing the smell of spilt beer and sweat,” my friend who’d traveled through England extensively pointed out.

Bombay, the Indian concept, hit all the traditional Indian-American high notes like tikka masala, esophagus-burning vindaloo, and samosas, with two-top tables just a little too close to each other. A nice, authentic touch for those of us who’ve been forced to eavesdrop on Tinder dates at Indian restaurants back home. All they were missing was BYOB.

Sushi, which is exceedingly difficult to do well, was executed perfectly at Soy, where a yellowtail crudo with jalapeño and citrus sauce was as mild and sweet as I’ve had at $24-a-plate spots in Miami. The rolls exceeded what you’d find at most mid-range sushi places though they weren’t quite to the level of, say, Nobu.

Poolside pizza doesn’t need to be perfect, but the Italian stuff from Dino’s would have tasted good without the view of the Atlantic Ocean. It wasn’t on par with the wood-fired, Neapolitan-style, we-cook-your-pizza-in-30-seconds places that are all the rage, and the pies were a little over-cheesed and over-topped. But that might be more a case of playing to the crowd.

A jerk-chicken-and-pepper-topped pizza was the only hint I got of Caribbean flavor here outside the fast-casual Jerk Shack. That joint served up chopped chicken and fry bread in the same fast, delicious manner as you’d find in roadside shacks in St. Croix. There were even stray cats lingering by from the nearby neighborhood to give it an extra touch of reality. 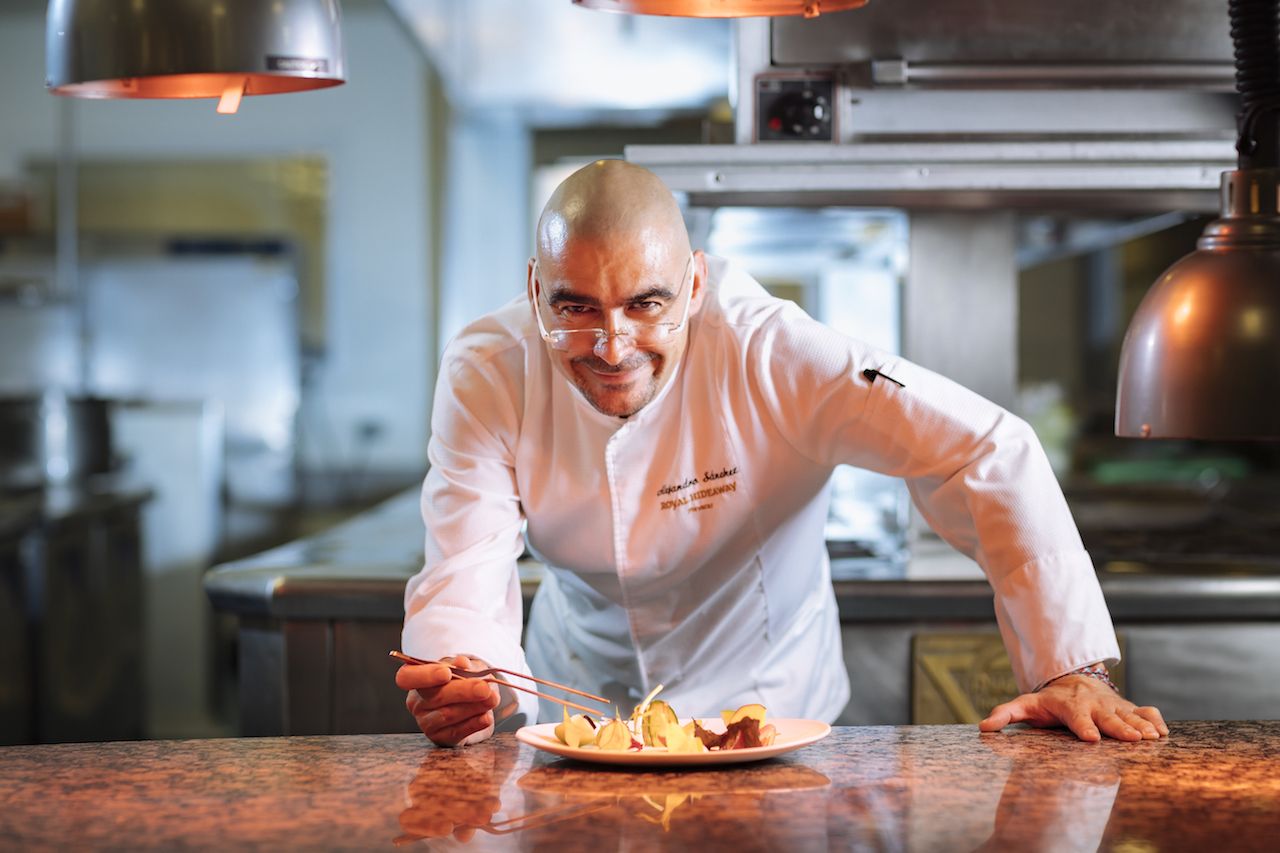 The restaurants at Sandals Royal Barbados didn’t disappoint, even a little, but I wasn’t pleasantly surprised since Sandals had talked it up to me plenty. That said, many who have the expectation of mediocre food at all-inclusives might be, including the chefs themselves.

“I’ve always thought that all-inclusive hotels were really poor quality… just cheap places where people don’t care about the food,” says Alejandro Sanchez, a chef and the Culinary Directory for Barcelo’s Royal Hideaway Playacar in Riviera Maya, Mexico. “Especially in Riviera Maya, where people just come for the sun and the beach and nobody’s concerned with the food.”

In Barcelo’s case, the resort saw this perception as a way to create a competitive advantage; by including stuff like a five-star Italian restaurant and a Mexican option focused on Mexican fine dining, it could offer an experience all-inclusive travelers don’t usually find. It’s part of the reason the Royal Hideaway is now part of the Leading Hotels of the World.

“I think now everybody wants to be better,” Sanchez says. “Every day people are more concerned with healthy food and quality produce. People have much more information. So people want to eat better. Now we have repeat guests who come here from word of mouth with a high expectation of the food quality. So that’s changed.” 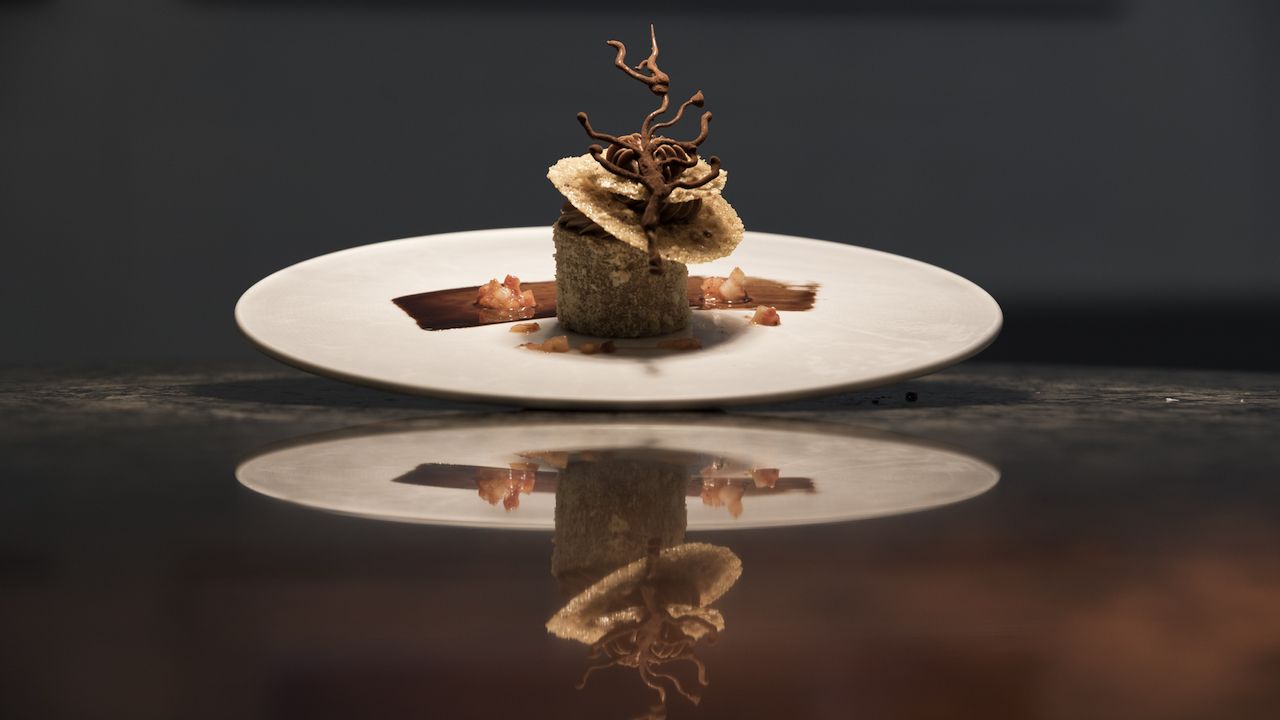 Much like with traditional restaurants, the bar for all-inclusive food has been raised considerably since my days of crushing an entire chafing dish of chicken marsala. If that’s still your expectation of food at the Sandals of the world, ask someone who has visited one about how well they ate. They’ll probably say the food was “surprisingly great.”

Or, god forbid, try one yourself. It’s a way to explore new food without much risk, since if you don’t like something you can try 100 other things without having to pay for it. The preparations, though excellent, still cater to Americanized tastes — and make for a vacation you’ll enjoy well past the age of 14.