Pittsburgh is known for many things: a fierce loyalty to local sports teams, French fries on salads (yes, it’s a thing), and Andy Warhol, to name a few. It’s a city with more than 200 overcast days on average, and is divided by three rivers and 446 bridges that criss-cross 90 neighborhoods. Recently, Pittsburgh has made a name for itself as a tech hub with business owners that have received an injection of venture capital that has made the city, once again, a place of industry.

What Pittsburgh gets less attention for is its architecture. The city appears like a patchwork of buildings absurdly placed along the geographic diversity of hill, riverbank, and urban sprawl. Outside of Pittsburgh’s famous neo-Gothic buildings, any architectural beauty seems to have flourished despite its location, not because of it.

For the real architectural wonders, locals like myself know that you should drive about an hour outside the city to a hodge-podge of mid-century houses that span a 15-mile radius from the nearest turnpike exit in a town called Donegal. Here, you’ll find the famous Frank Lloyd Wright buildings Fallingwater and its little brother, Kentuck Knob. While I don’t want to gloss over the beauty of these two architectural phenoms, the real gems lie on a wooded lot that houses four – yes four – mid-century modern houses in Polymath Park. And the real kicker? You can stay overnight in any of them.

A post shared by Wright At Polymath Park (@wrightatpolymathpark)

The site now known as Polymath Park began as a commune of sorts for two families: the Balters and the Blums. Entrepreneurs from Pittsburgh, they purchased 130 acres of woodland in what is called the Laurel Highlands in Western Pennsylvania for a country home to escape to on the weekends. During this time, they began working with the Frank Lloyd Wright apprentice Peter Berndston to build accommodations for the families.

These two houses, which are still operational today, became the seedling for a larger project nearly 40 years later when the Papinchak family (who lived in an adjacent mid-century mountain retreat) purchased the Balter and Blum houses to save them from redevelopment (or worse, a complete tear-down for another Dollar General).

By 2006, the Papinchaks were becoming known in conservation circles for their dedication to Polymath. The Papinchaks were offered the opportunity to take ownership of the Duncan house, a Wright property originally from Illinois, after the original plans to relocate the property to a nearby town as the centerpiece of a botanical garden fell through. Nine months later, the property was taken from its original home in pieces, transported to Polymath, and rebuilt and opened to the public alongside its Blum and Balter siblings.

A year later, Polymath opened to the public, offering an in-person experiential tour of Wright’s Usonian design up close and personal. Overnight lodging started the same year to allow guests to sleep in a living piece of American history.

A post shared by Wright At Polymath Park (@wrightatpolymathpark)

Amazingly, the conservancy efforts have never wavered for the Papinchak family, who, in 2016, had a similar opportunity with a property called Mäntylä as they did with Duncan. Nearly a decade after first transporting a house piece-by-piece, they did it again — furniture and all — only this time from Minnesota.

Today, Polymath Park is an unlikely tourist destination in the middle of nowhere (and I say that lovingly, living only 15 minutes from the site). To see four Usonian buildings rise out of the wooded acreage of the park is somehow jarring and somehow so fitting to the overall philosophy of Wright himself: to build with nature, not against it.

All four houses take after Wright’s Usonian architectural style. The style emphasizes a relationship with nature, a passive relationship between interior and exterior materials, and an angular blueprint that strongly contrasts with the natural surroundings. While these are the basic principles, each of the four Polymath Houses, two from Wright himself and two from his apprentice Berndtson, has its own personality.

The Duncan house provides ample sunlight in the main living area while emphasizing compartmentalized spaces, toying with perspective and space. 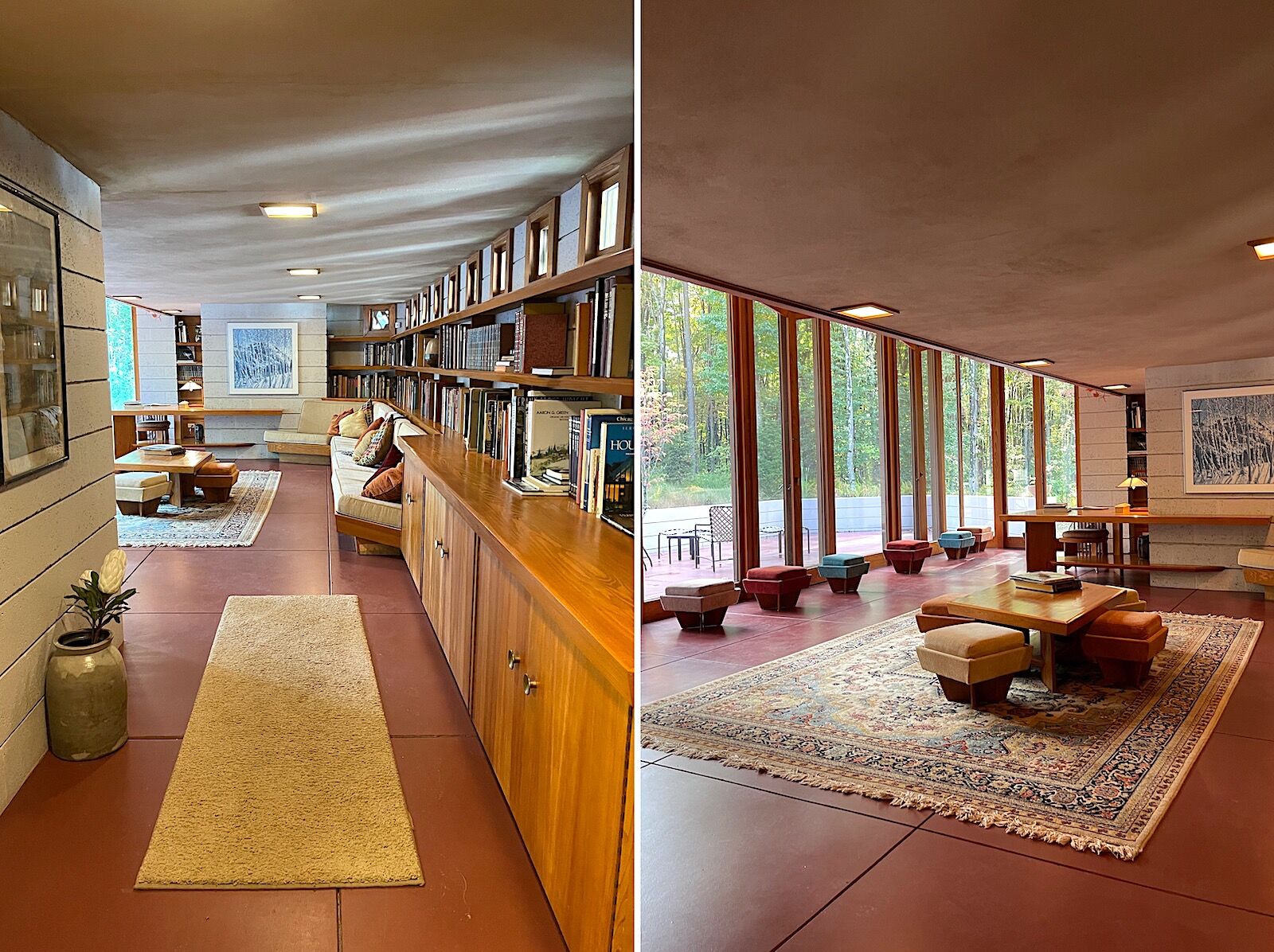 Mäntylä, the most impressive to me, remains largely untouched from the original owners, whose children donated everything from Christmas decorations to family photos to the conservancy. Built-in furniture faces one wall of the large, windowed living space, which is the most impressive feature of the property. The remainder of the house, a trademark of many Wright homes, is diminutive for the “private” quarters and is reminiscent, as a tour guide told me on a visit, of a naval ship’s cabin.

The Berndtson properties are no less dramatic, but you can feel the shift between master and apprentice when entering the Blum and Balter properties. Both properties contain familiar elements of Wright’s principles – Cherokee red concrete, geometric playfulness, and a nod toward elemental integrity with nature — but it’s all on a more diminutive scale. These were, of course, family homes to be lived in, and they feel homey in the right sense of the word.

All of the four houses mentioned above – Blum, Balter, Duncan, and Mäntylä – are available for overnight lodging. It can’t be stressed enough the rarity of being able to stay overnight in a Wright property. This is the closest many people can get to spending the night in a museum, and one should, if possible, experience it at least once in their lives.

Each property limits parties to four guests, so it’s best for a couples’ retreat or a romantic getaway. With basic amenities and no Wi-fi, one really is forced to unwind and enjoy the natural beauty of the woodlands surrounding these historic properties. 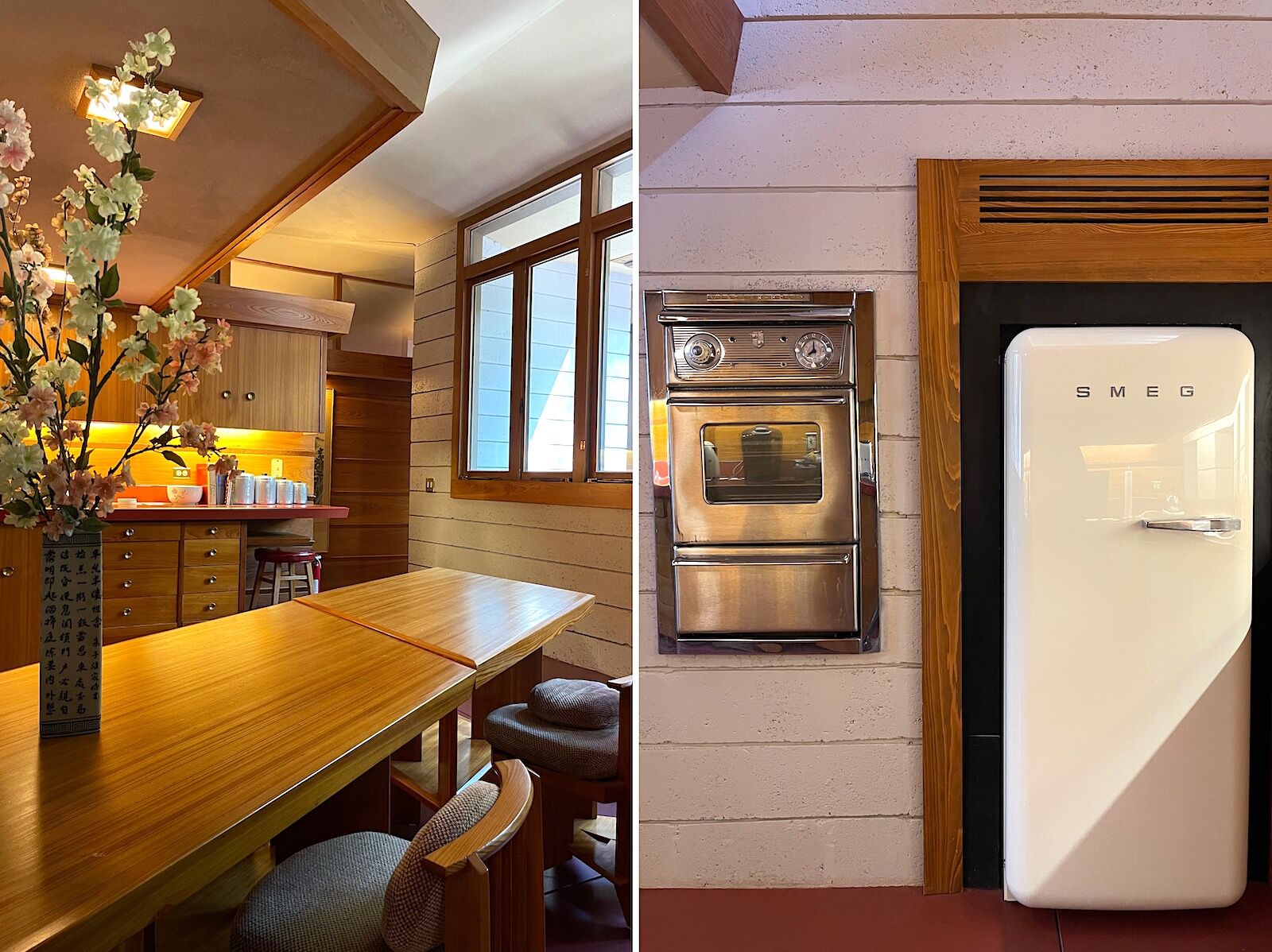 Each house is equipped with the bare necessities essential to providing a level of comfort analogous to a hotel, from comfortable bedding and linens to a Keurig and a Smeg fridge. Cooking isn’t permitted, so your best bet is to take a few snacks with you to tide yourself over in between meals at the on-site Treetops Restaurant.

Overnight stays range in price from $450 (Blum and Balter) to $750 (Mäntylä). Check-in time is 5:00 PM and check-out is 10:00 AM, which, given how dark Pennsylvania gets in the fall and winter, means your daylight is limited for much of the evening, so plan accordingly.

If you can’t shell out a few hundred for a stay, consider a tour instead. The tours run every day except Wednesdays and provide an in-depth look at the houses with a knowledgeable guide leading the way. During my tour, saw Duncan and Mäntylä, but it was more than enough to leave me satisfied. Lunch tours are also available, if you want to make it more of an event as an out-of-towner.

7 Signs You Were Born and Raised in Pittsburgh

15 Dilemmas Only People From Pittsburgh Will Understand