As in neighboring Scandinavian destinations, Finland’s capital isn’t known for cheap prices. But, for those who know how to look, there are actually plenty of ways to enjoy the city without breaking the bank. Many of Helsinki’s most popular attractions — including the main churches and the Suomenlinna Fortress Island — are free to visit, and it doesn’t end there. From museums to an alternative sauna experience, here are 10 things you can do in Helsinki for nothing, or nearly nothing.

1. Visit a museum for free. 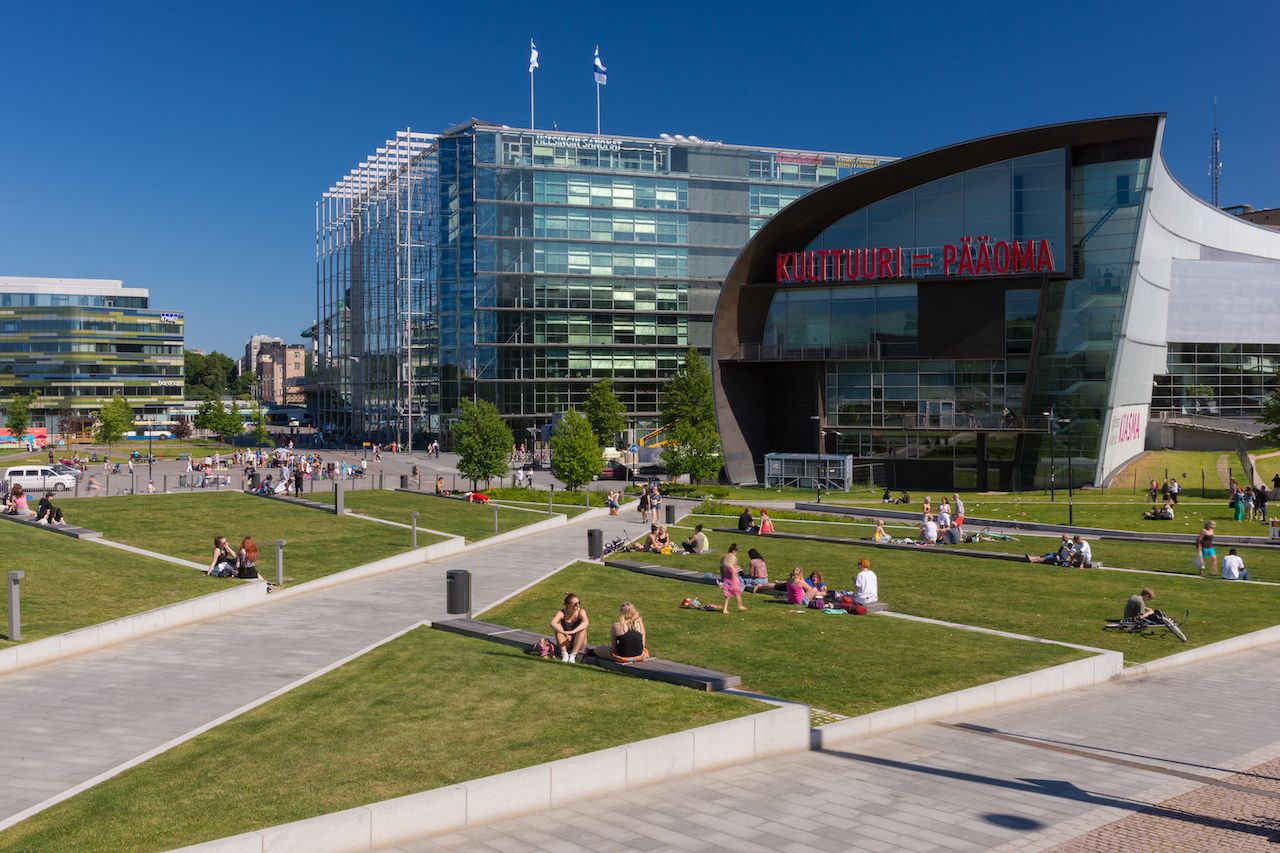 Many of the city’s top museums are completely free of charge. Start your tour with a visit to the Helsinki City Museum, located smack in the middle of the historical city center. Both the permanent and rotating exhibitions have a common theme and are built around the everyday history of Helsinki and its inhabitants. You can also immerse yourself in the history of trams or the working class or visit Burgher’s house, the oldest wooden building in central Helsinki. It’s worth checking out the free entry dates for other museums, as well. For example, Kiasma, the museum of modern art, offers free entry on the first Friday of every month.

2. Pop into the National and Central Libraries. 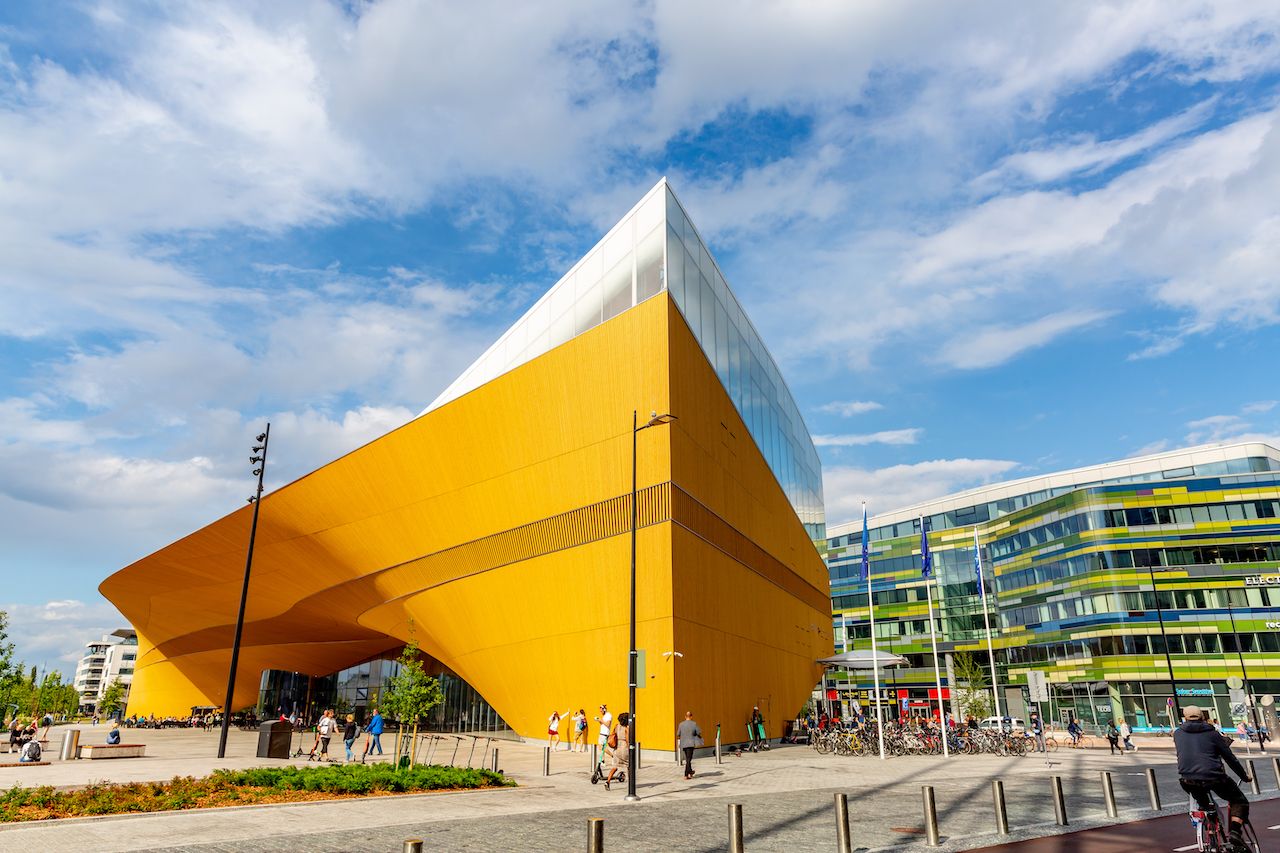 Helsinki is home to nearly 40 public libraries. The mother of them all is the recently renovated National Library, originally completed in 1840. A fine example of early 19th century Empire architecture, the library has an especially impressive main hall with a beautifully decorated dome, pillars, and wooden bookshelves. Like many other historical buildings in central Helsinki, the library was designed by architect Carl Ludwig Engel.

Library lovers should also pay a visit to the new Helsinki Central Library Oodi, located just next to the central railway station. Take a break and read a book, play some boardgames, or enjoy the views on the rooftop terrace. Oodi is also home to a cinema, a music studio, and a playground for kids, making it a bit like an urban living room for city dwellers. 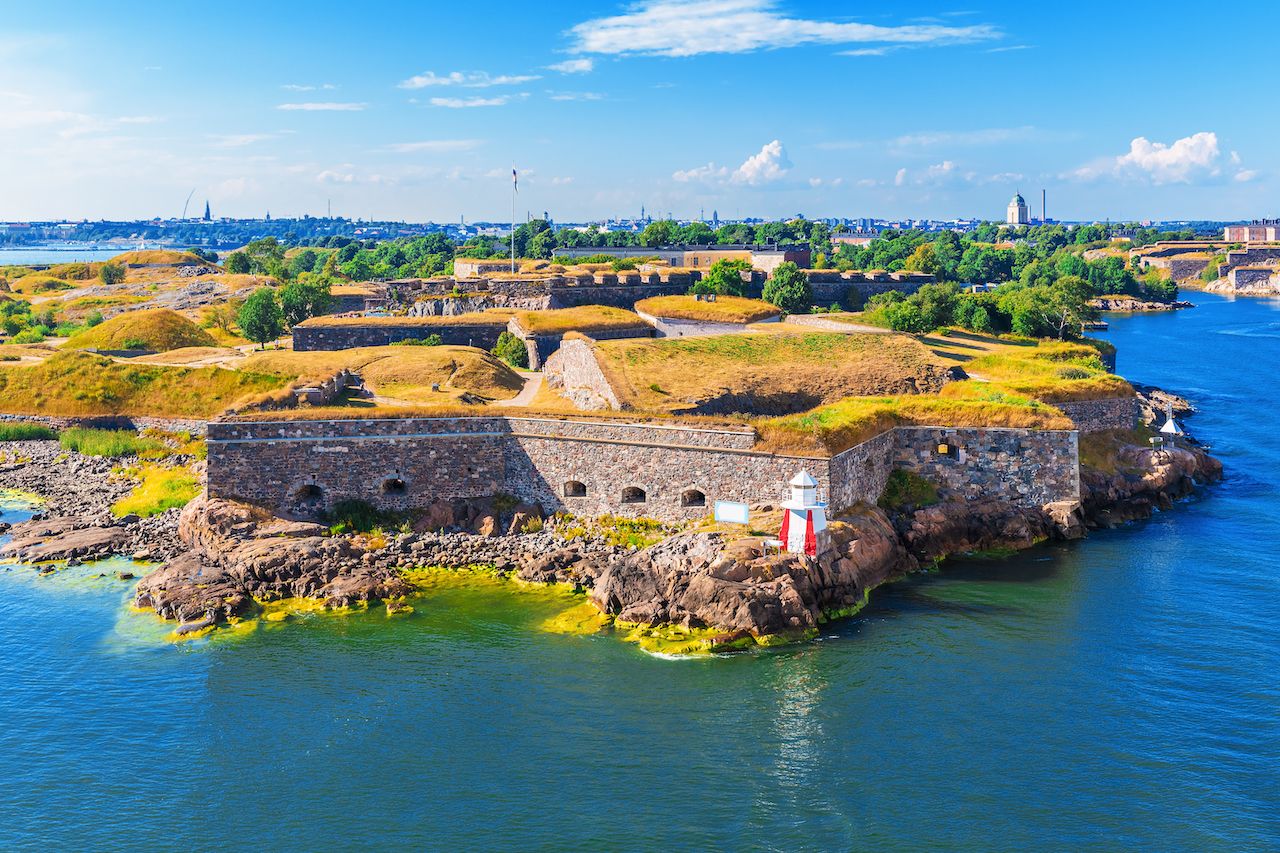 One of the most popular attractions in Helsinki is Suomenlinna, a former fortress island and a UNESCO World Heritage site. Appreciated by locals and travelers alike, this island is a popular destination for historical walks, picnics, and swimming. To get there, you’ll only need to hop on a ferry departing from Market Square. The journey takes about 15 minutes and, because it’s part of the public transport network, only costs about $3.10 one way. When visiting the island, do note that it’s home to about 800 people who live there throughout the year. Respect their privacy by staying on the marked paths and taking your litter with you. Other tips for a sustainable visit can be found on the official website. 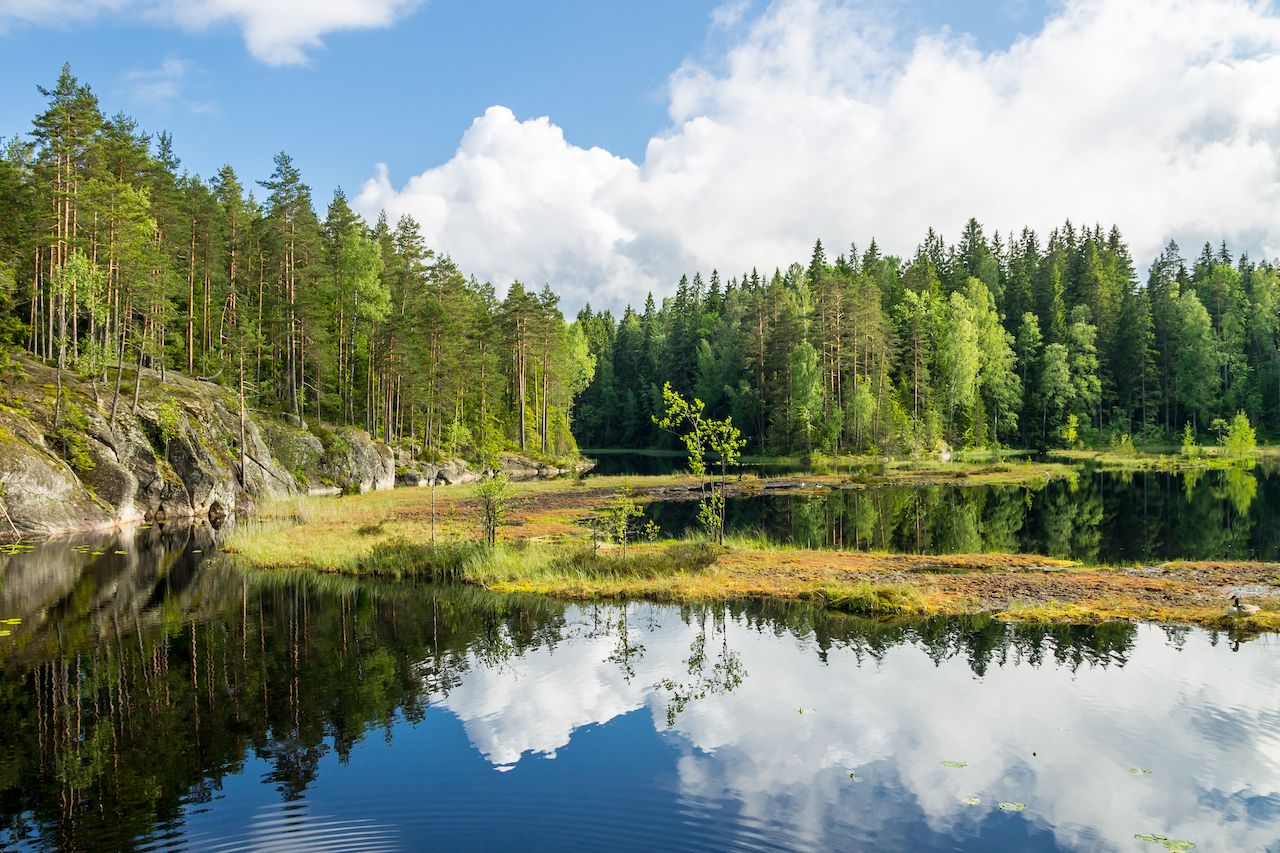 The 17-square mile national park of Nuuksio is just an hour away from Helsinki and, like the fortress island, can be easily reached by public transport. The best way to enjoy the park is to head to Haukkalampi and do one of the marked hiking tours which start from there. If you’re feeling a bit more adventurous — and have your own tent or hammock — you can extend your trip for an overnight stay.

There are no camping fees, and the camping spots have campfire facilities and covered cooking areas in case it happens to be rainy. Thanks to the idea of jokamiehenoikeus, or “everyman’s right” to roam, forage, fish with a line and rod, and spend time in the natural areas — a concept shared with Sweden and Iceland — the berries and mushrooms found in the national park can be picked by everyone. So pack a container in case you spot some Finnish forest treats, such as bilberries, lingonberries, funnel chanterelles, and other wild mushrooms.

5. Get to know the local food culture in markets. 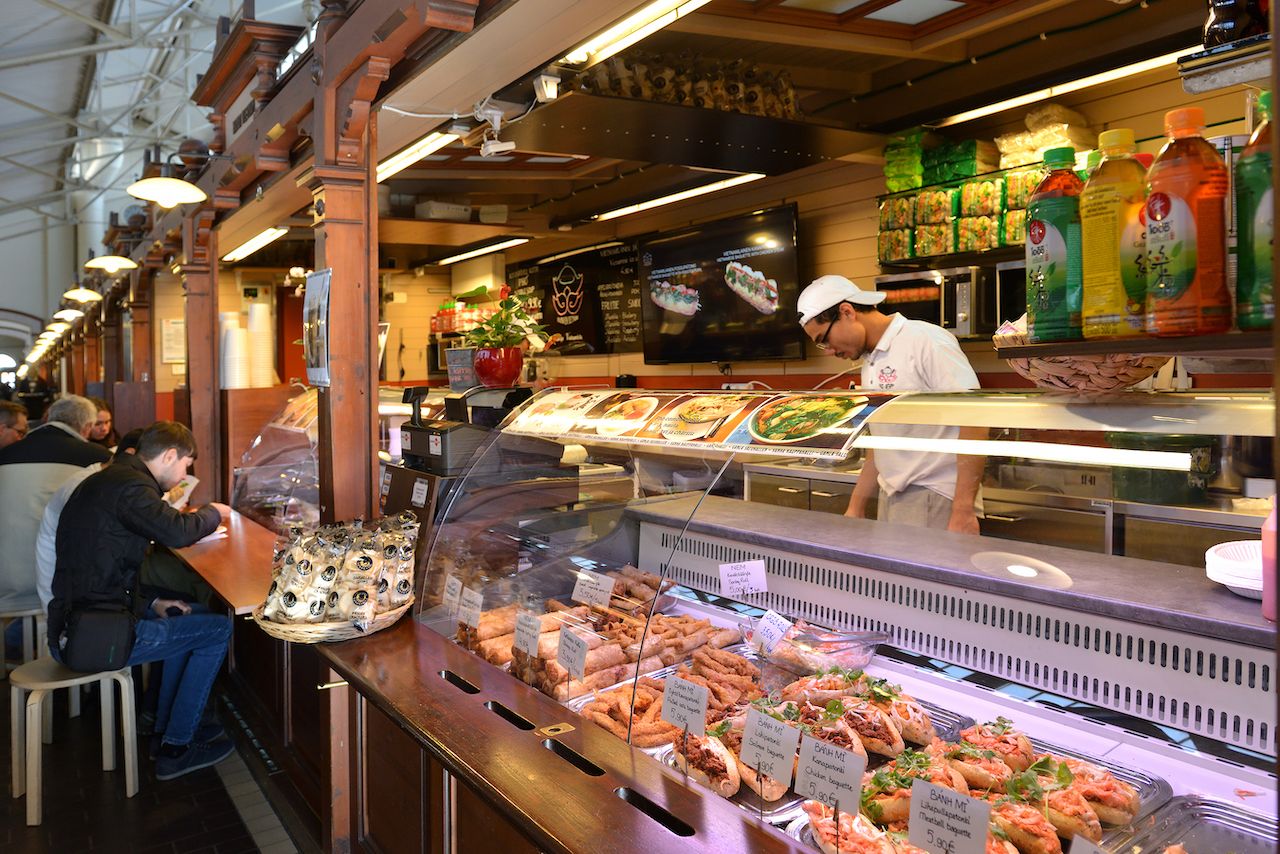 Helsinki has three market halls, all unique in their own way. Most visitors will find their way to Market Square and the nearby Old Market Hall, both full of local produce, as well as traditional souvenirs. Those looking for something more local should head to Hietalahti Market Hall, an old market hall turned into a hub of restaurants.

Pick your favorite from the many tasty and affordable lunch options, ranging from traditional Finnish salmon soup to Japanese ramen. During summer weekends, you’ll also find a popular flea market outside. The third market hall, the eastern Hakaniemi Market Hall, is currently under renovation, but all vendors can be found at the temporary glass building on the Hakaniemi Market Square.

An essential part of the experience in Helsinki is sitting down for torikahvit, a cup of filter coffee and a sweet pastry, such as a korvapuusti (cinnamon bun) or munkkipossu (sweet flat doughnut filled with jam). These traditional market cafes, usually located in orange tents, can be found on both the central and Hakaniemi market squares. 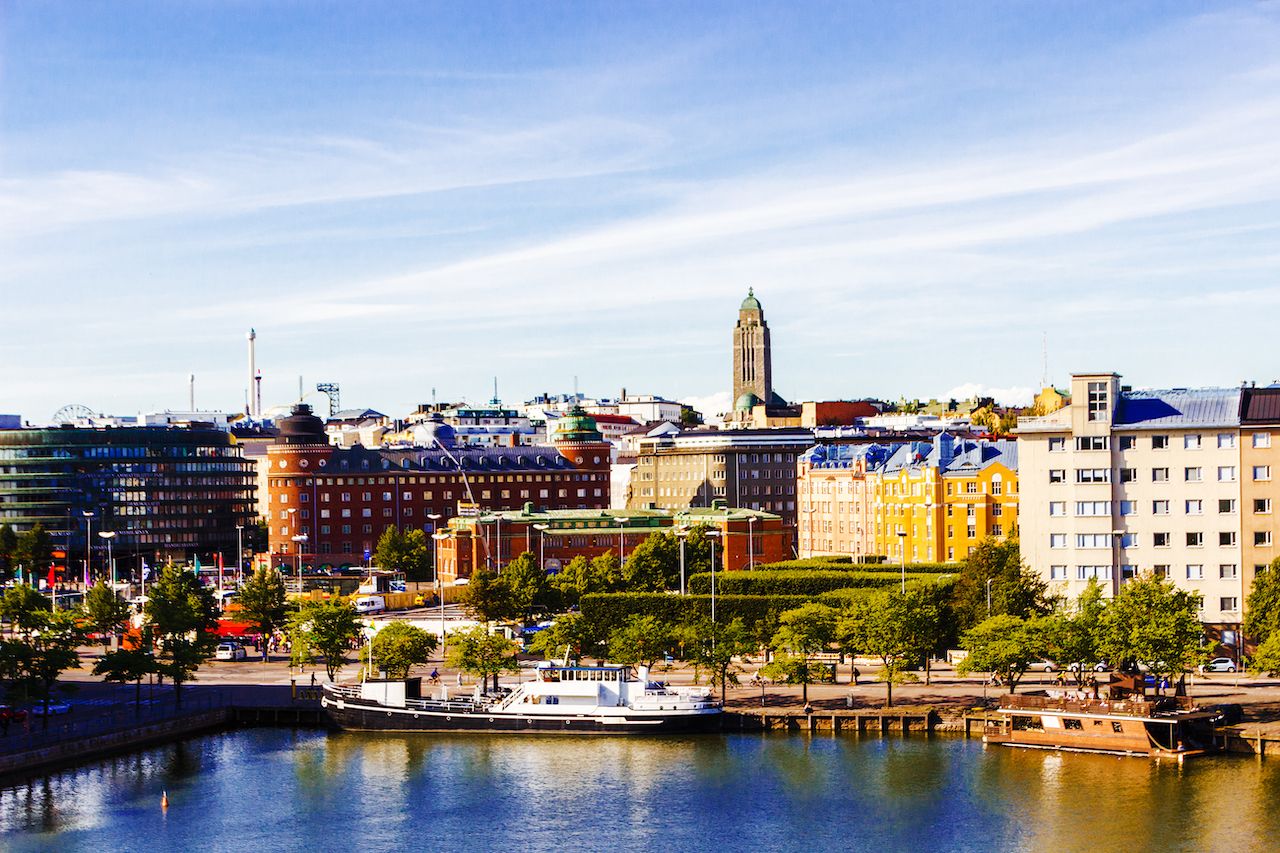 Venture out to the east to Kallio, Helsinki’s equivalent of Brooklyn. Formerly a working-class neighborhood, Kallio has undergone a transformation into a lively area filled with cozy cafes and brunch spots, hip restaurants, bars, and music venues. It’s still rough around the edges, though, so you’ll also find plenty of blue-collar karaoke bars, happy hour beers, and adult stores.

For a complete Kallio experience, enjoy brunch at the record-store-slash-cafe Tanner before moving on to a glass of natural wine at the trendy wine bar Wino. Finally, head out to an old-school karaoke bar like Tenkka or Roskapankki, which literally means “trash bank.” Both venues are Kallio institutions known for their early opening hours — because hey, who wouldn’t want to have a pint and belt out some tunes at 9:00 AM?

7. Enjoy the atmosphere and free rides at the Linnanmäki Amusement Park. 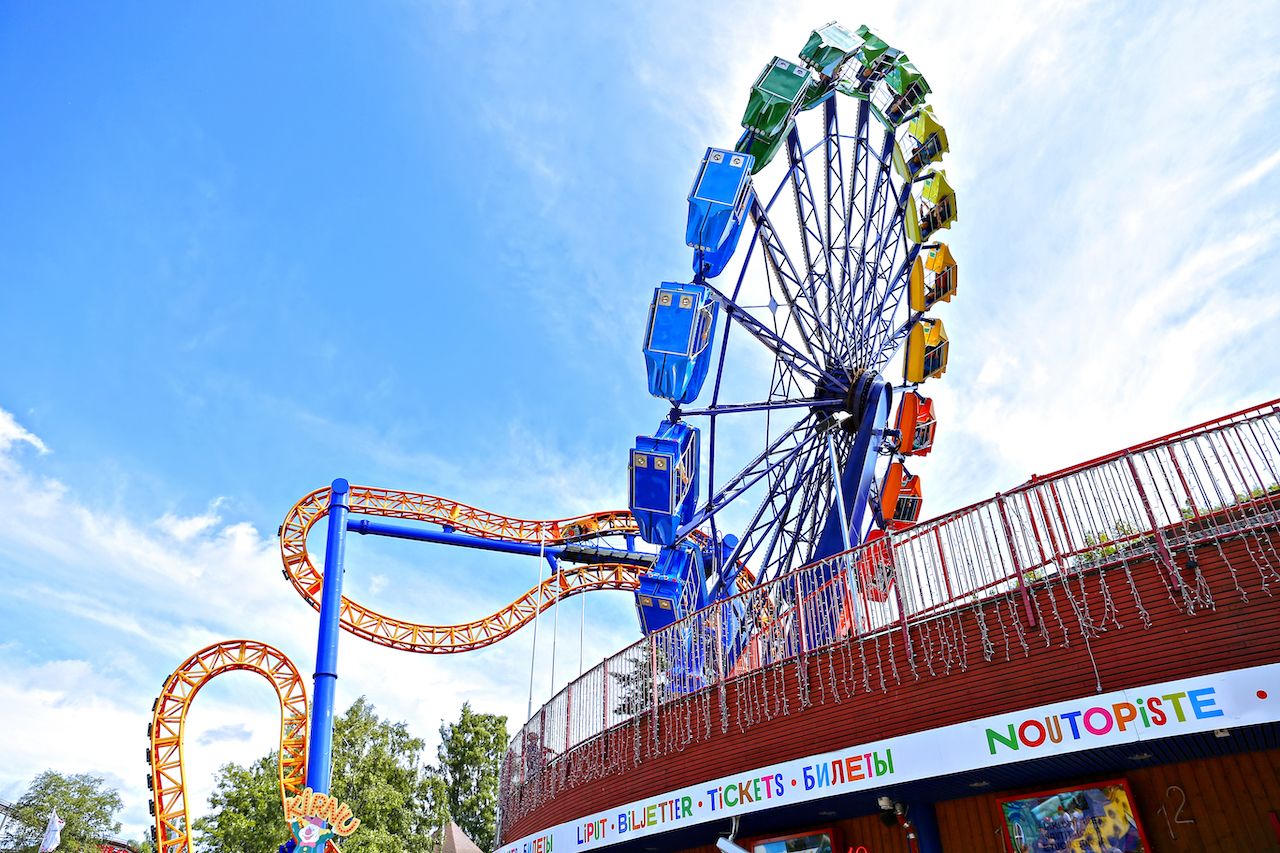 Located on top of a rocky hill in Alppila, the Linnanmäki Amusement Park has a unique charm, as it is the oldest of its kind in Finland. Even though most people come here for a whole day, it’s easy to pop in for a quick visit as there’s no entrance fee, and you can even ride a couple of the rides for free. Although most of the free rides are more suited for kids, the Panorama tower is fun for adults too and will take you more than 170 feet high, providing a spectacular panorama over the city. And if you happen to be in Helsinki in October with your loved one, don’t miss the annual Festival of Lights, a popular date destination for couples. 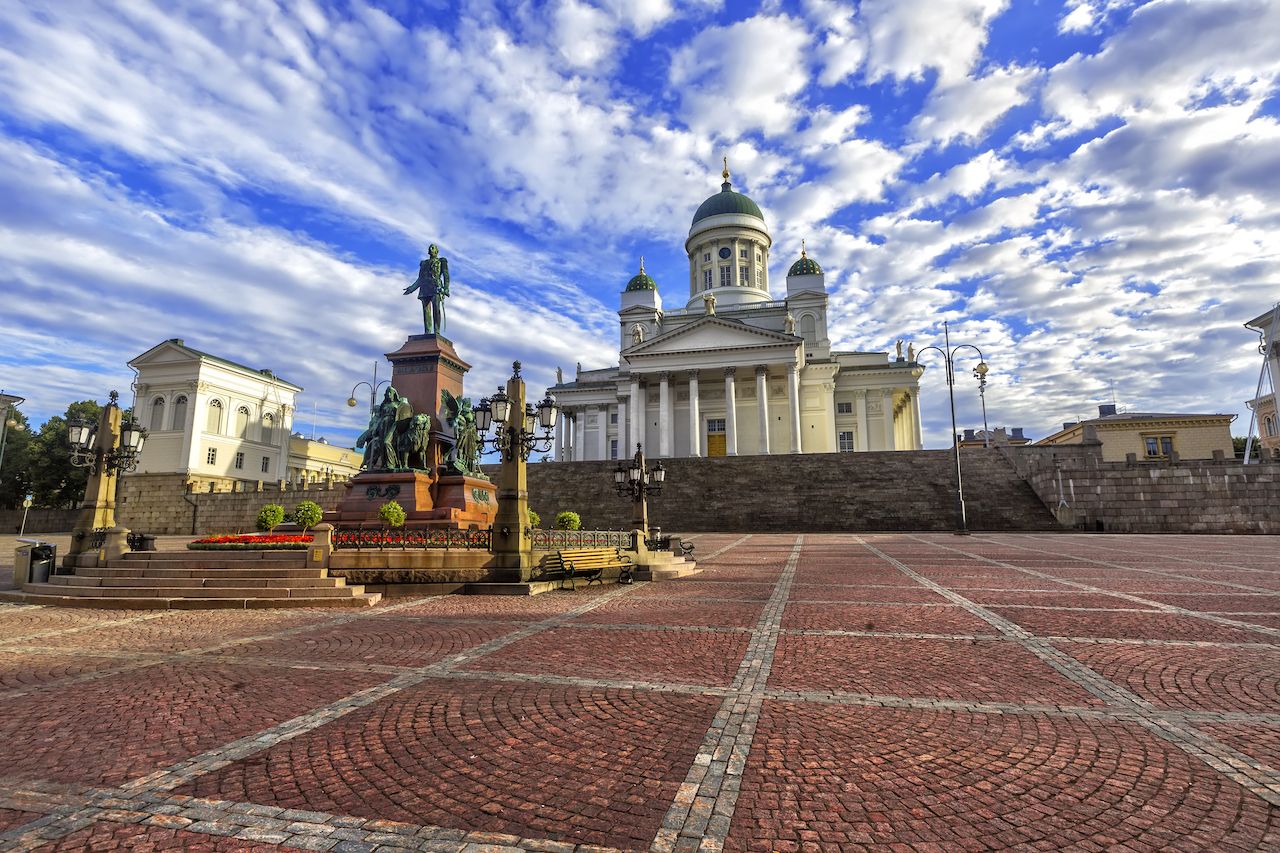 Take a break from the bustle of the city and pop into one or more of Helsinki’s main churches. The bright white Helsinki Cathedral on the Senate Square is a landmark not to be missed. After enjoying the serene and simple interiors, do as the locals do and spend some time sitting on the steps leading up to the church. Fun fact: The steps also acted as the seats for a concert by indie rock band Arcade Fire in 2010.

A bit further to the west in the Töölö neighborhood, the Temppeliaukio Rock Church has a unique atmosphere, as it has been excavated right into solid rock, and the daylight only enters the building from a ceiling window. There’s usually an entrance fee of just over $3, but on Wednesday afternoons, the church can be visited free of charge. Finally, complete your church tour with a visit to the red-brick Eastern Orthodox Uspenski Cathedral, overlooking the city from a hill in Katajanokka, and the small wooden Kamppi Chapel of Silence, located between the main shopping centers in the city, Kamppi, and Forum.

9. Have a picnic at the Winter Garden Glasshouse 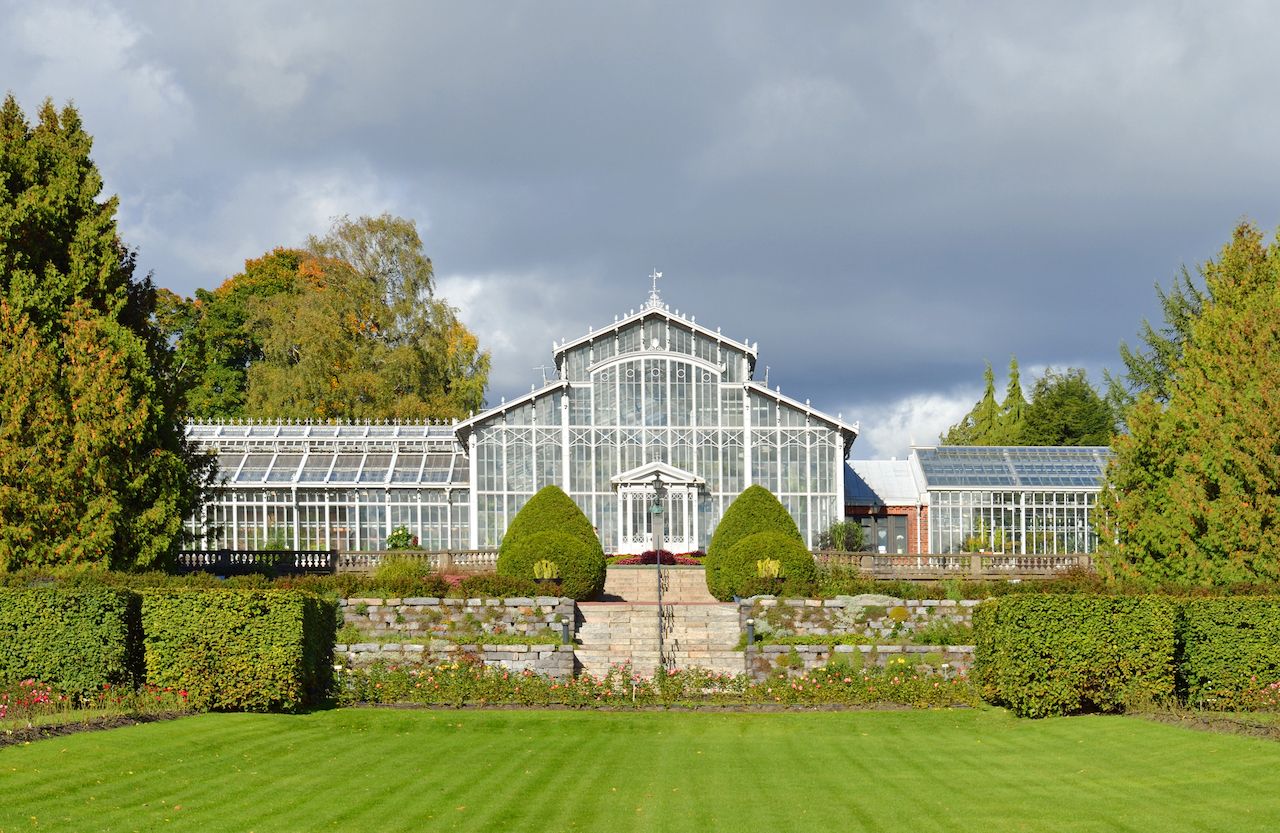 Although most people will time their visits for the summer months, many of Helsinki’s attractions can be enjoyed throughout the year. One of them is the Winter Garden, a glass greenhouse full of exotic plants and flowers. Enjoy a moment under the palm trees, read a book, or bring your own snacks to have a small picnic among the greenery. If the weather is nice, take a stroll around the adjacent Töölönlahti Bay, a popular spot for runners, cyclists, and Sunday walkers. 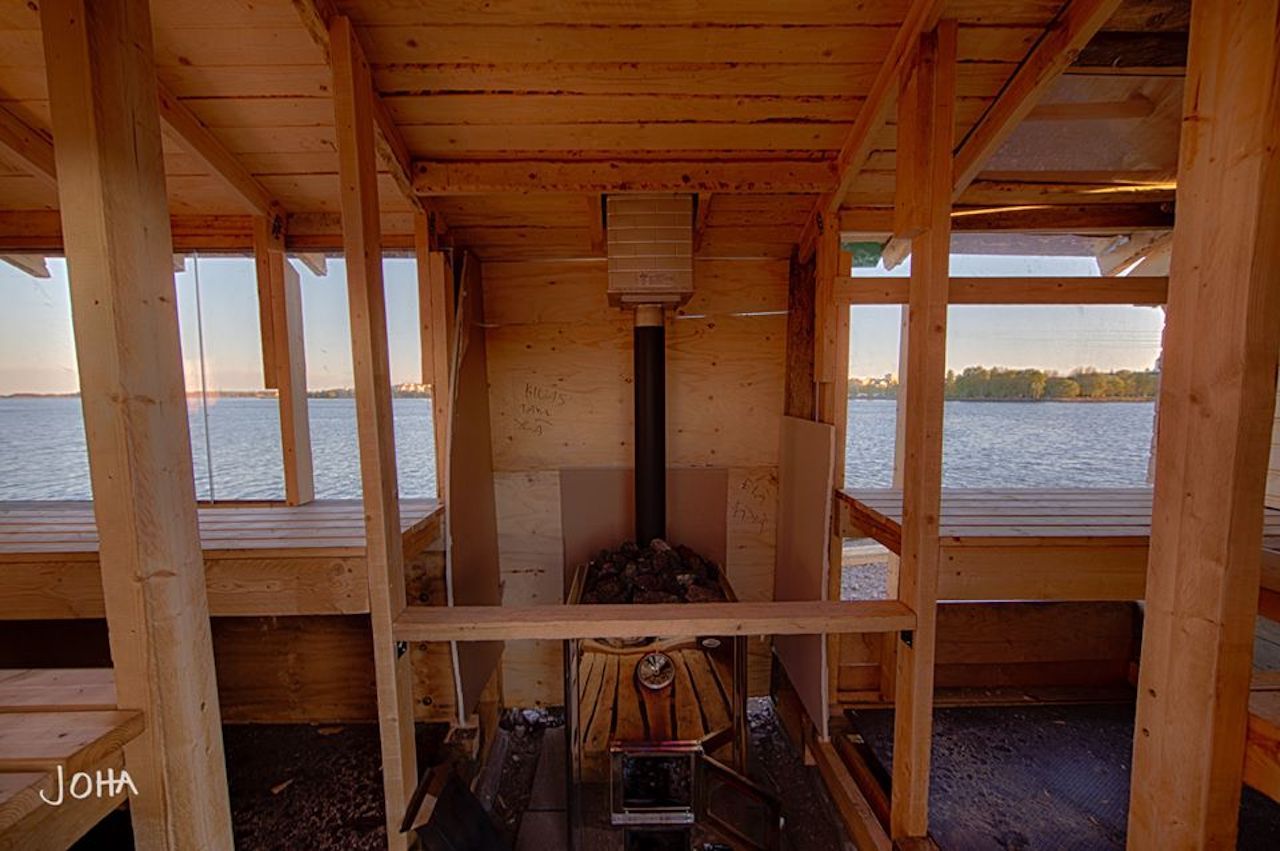 No trip to Finland would be complete without a good old sweaty sauna session. There are plenty of paying public saunas in Helsinki, but if you’re tight on budget and ready to experience something a bit different, try the free, self-service Sompasauna in Kalasatama. This quirky example of the Finnish sauna culture has been around since 2011, built and still maintained by volunteers. Bring along your own sauna beverages, towel, and swimsuit, but don’t necessarily expect to see the locals wearing one — Finns are very open-minded towards nudity when it comes to saunas.

Restaurants + BarsThe Best Helsinki Bars That Are Only Open in the Summer
Tagged
Budget Travel Insider Guides Helsinki, Finland
What did you think of this story?
Meh
Good
Awesome