We live in a world filled with diverse styles of bread. There’s Ethiopian injera and Indian naan, Irish soda bread and Slovakian vanoka. Not to mention the many types in the United States, like the humble loaf of potato bread. Few get as much attention in the US, however, as two generic styles that take their name from European countries: French bread and Italian bread.

This classification itself doesn’t make a whole lot of sense — there are many types of French bread and many types of Italian bread — but it prevails nonetheless. Grocery store bread aisles are lined with brown paper bags of “French bread,” and the baseline bread at Subway is simply called “Italian.” Both are long loaves of white bread, usually made from wheat, and are often used for sandwiches. At first glance, there’s not a whole lot to distinguish the two. But if you take a look back at how the styles were made, there are some notable distinctions.

So, taking these two broad titles for what they are, what’s the difference between them? 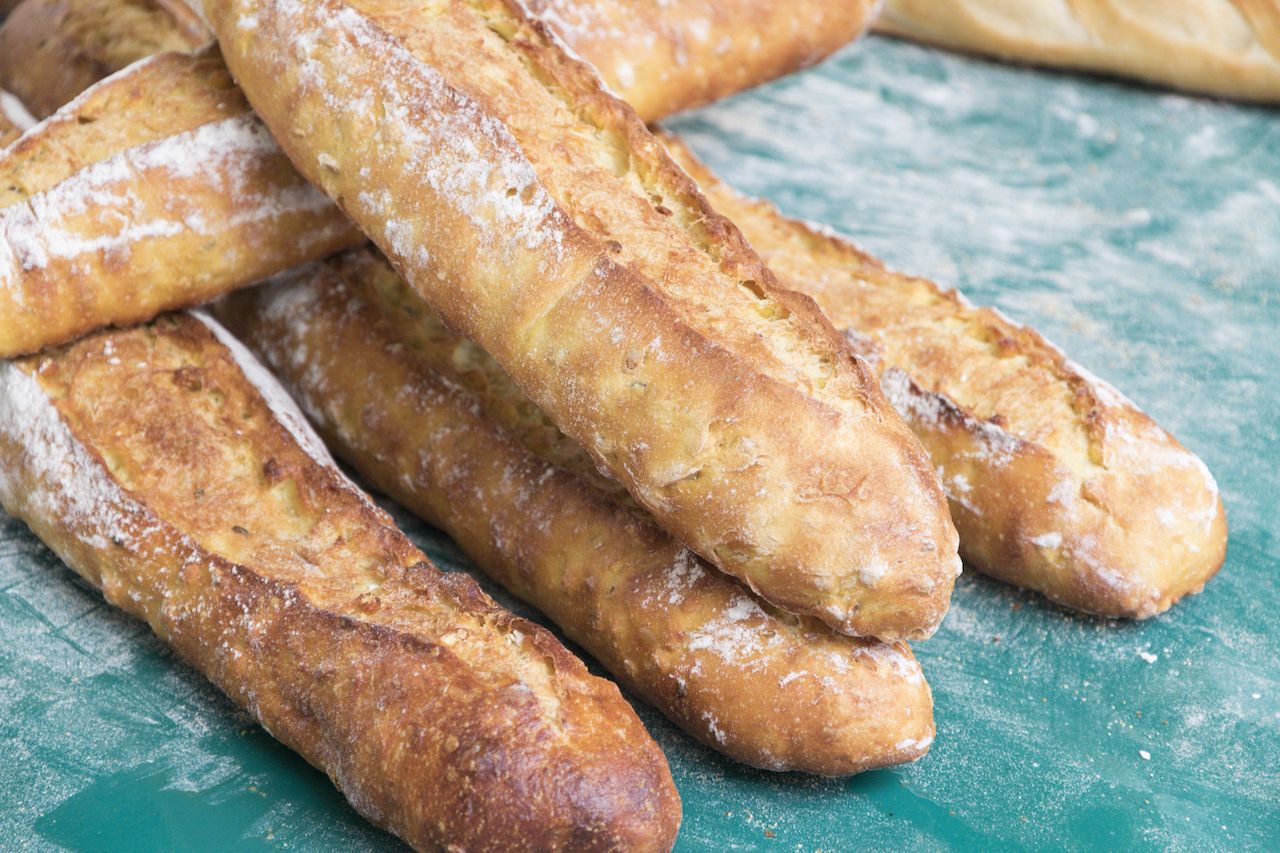 What people typically think of as French bread is the baguette. At its most basic, a baguette is between two- and three-feet long and is thin, so the crust-to-middle ratio leans heavily on the crust. The crust style and ratio are often the most telltale signs as to whether a bread in the US is French bread or Italian bread. Baguettes are cooked in steam injection ovens, which keep the bread moist without the use of fat or oil.

Translated, baguette means rod or stick, and it refers to the thin, long shape. Today, the baguette is a symbol of French culture, but the style is not actually all that old. The word for baker is boulanger, or one who makes boules (a round bread loaf), rather than the baker being named after the baguette.

A French law ratified in 1993 named the Décret Pain (bread decree) governs how baguettes, and all traditional French breads, are made. The first iteration of the law was introduced in 1905, and there have been various updates since, but a few solid basics have held strong. First, French bread must be made solely with flour, water, salt, and beer yeast (Saccharomyces cerevisiae). It also can’t contain preservatives, which might be the source of the traditional daily bread run. No one wants to eat stale, day-old bread.

While no one knows exactly when or how baguettes became so prevalent, Jim Chevallier, the author of August Zang and the French Croissant, compiled the known and assumed history of the baguette on his website, Chez Jim. He found references in baking manuals to breads like the jocko and the flute that looked like baguettes around 1900, but this particular bread style didn’t regularly appear as a baguette until the 1920s.

Various origin stories posit that the shape came into being so that Napoleon’s soldiers could carry bread in their pants, or that it was created by the Austrian baker who popularized the croissant, or that bakers came up with the quick-baking style after the French government ruled bakeries couldn’t start operations until 4:00 AM. All of these theories have holes in them, and the most likely origin of the baguette is that it appeared over time and evolved from other popular styles.

Other common types of French bread include: 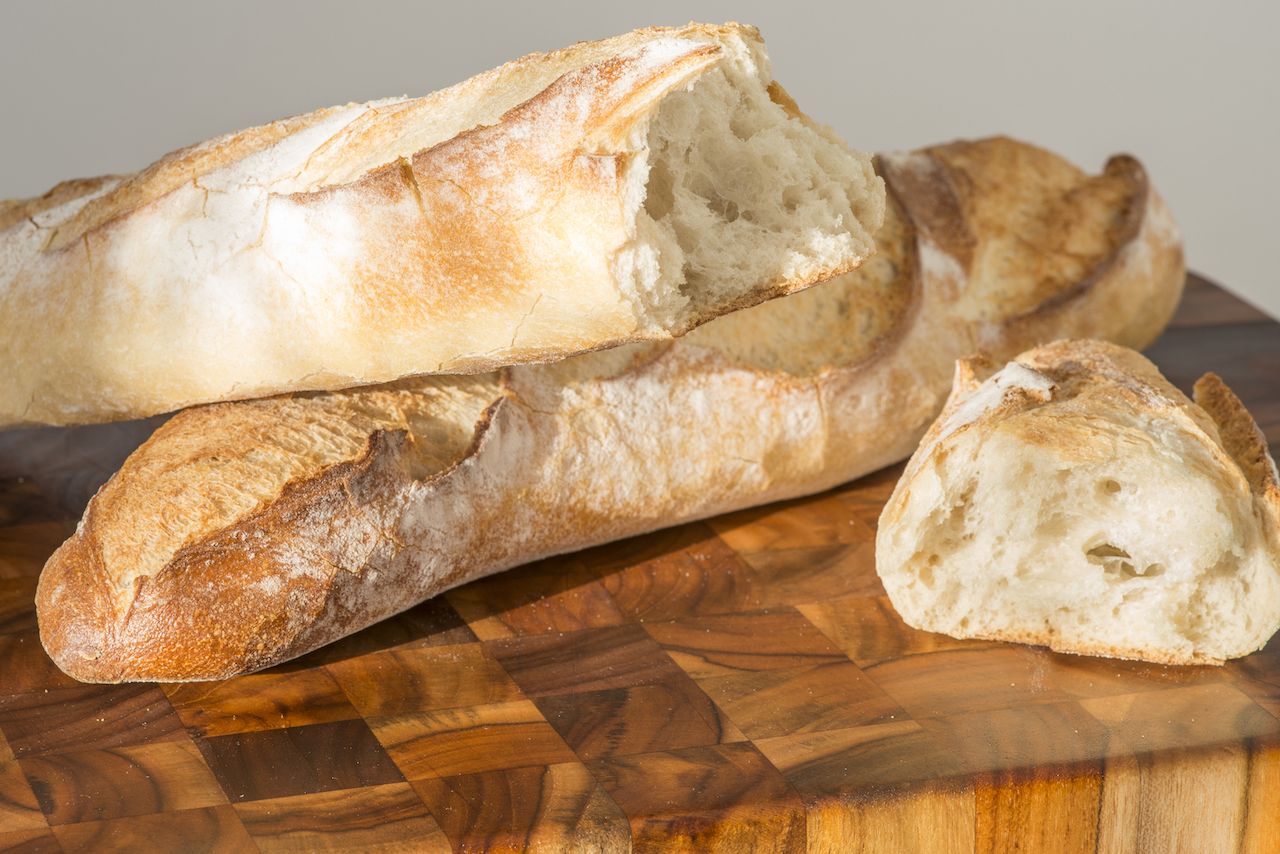 As in France, there is no single type of Italian bread. What is commonly sold as Italian bread in the US most closely resembles a more elongated Pane Casareccio di Genzano. The style comes from a region just south of Rome. By law, this type of Italian bread can only be made in a designated area, like Prosecco wine or Parmigiano-Reggiano cheese. The loaf has a thin crust and is made with natural yeast, salt, water, and flour, and it’s baked in stone or brick ovens, so the crust is typically blackened unlike the similar Italian breads baked in commercial ovens in the United States.

Pane Casareccio di Genzano has been popular around Rome for centuries. It became more widespread after World War II. It has less crust than inside compared to a baguette partly due to its slightly thicker shape, and it’s perfect for soaking up olive oil or sauce. Just don’t expect your Subway or grocery chain Italian bread to have that delightfully blackened exterior. Other than the difference in the type of oven used to bake it, Italian breads in the US will typically use fat, oil, or sometimes milk to keep the bread moist.

Other common types of Italian bread include:

Food + DrinkNow’s the Time To Get Really Good at Baking Bread
Tagged
Food + Drink France Italy
What did you think of this story?
Meh
Good
Awesome