Packed with colorful and festive events, a blend of cultures that’s reflected in an array of delicious food, and unique and historical sites, gay San Antonio is also one of the queerest cities in Texas.

“When you have a melting pot like San Antonio, you are surrounded by different cultures, backgrounds, and a multitude of diversity within our LGBTQ+ community,” shares the award-winning drag queen Kristi Waters, who recently served as grand marshal for the city’s new river Pride parade. “Travelers will not only feel a warm welcome but the charm and friendliness that we genuinely present. We are about love, community, and having a great time,” Waters continues.

With one of the largest populations of LGBTQ+ parents in the US, the city has a prospering LGBTQ+ community, over a dozen nightlife options, great food, and an exciting drag scene.

A brief history of the LGBTQ+ scene in San Antonio 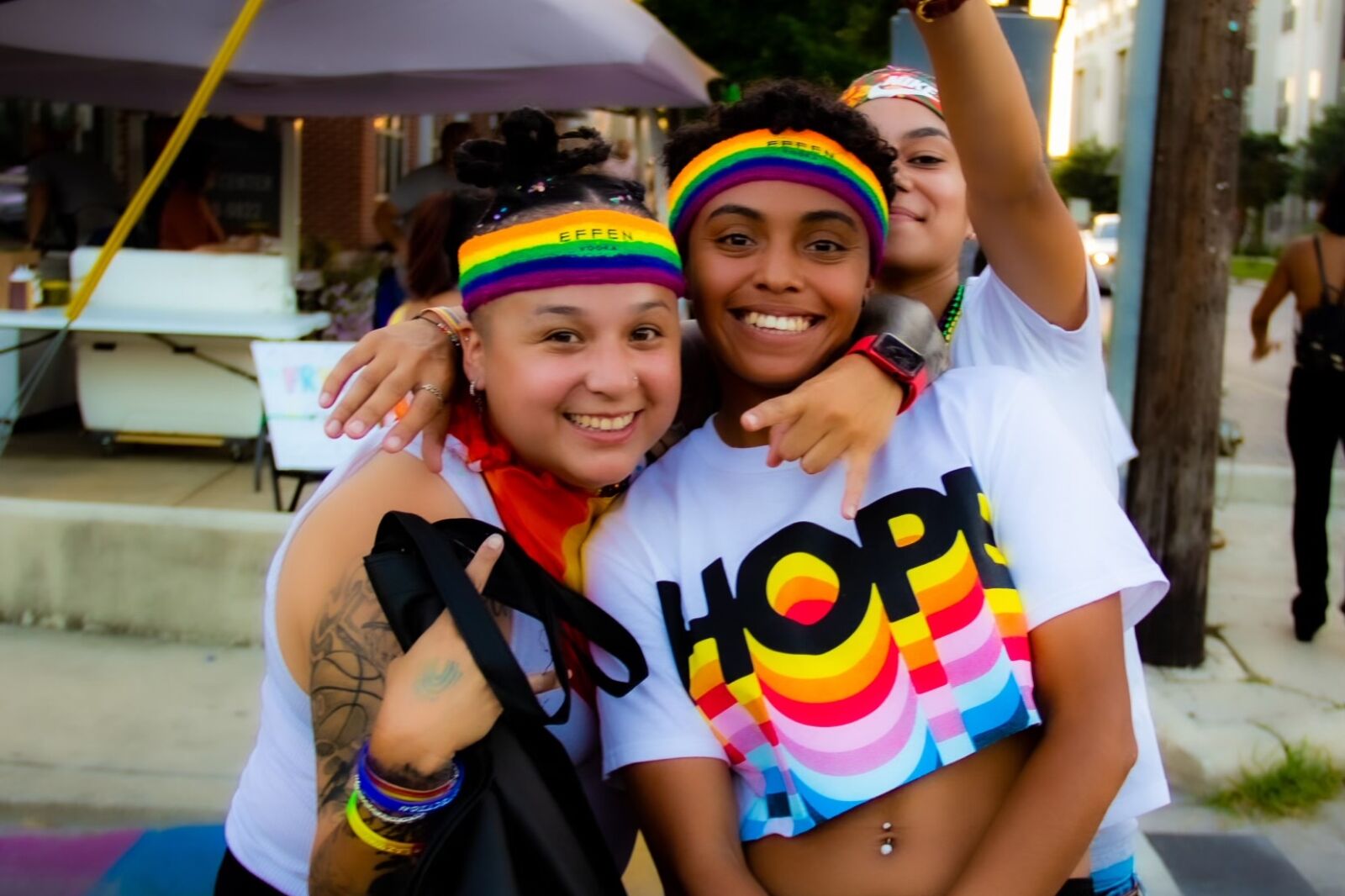 According to The University of Texas at San Antonio Libraries, drag culture in the Alamo City goes back to the early 1900s.

In the 1930s, Texas female impersonator Ray Bourbon’s Hotcha Hinton was a guest performer at San Antonio cabarets and eventually headlined her own shows. Drag queen performances emerged all over the US because of prohibition, and this surge was known as the “pansy craze.” The UTSA Libraries also noted that while the “craze” only lasted into the early 1940s for most cities, San Antonio remained captivated with drag queens and the performance scene survived — even after the war.

The following decade saw drag queens added to the iconic event lineup — more about that later. And while there were establishments in the city where the queer community could spend their nights, potential raids and ongoing police harassment caused people to flee to the outskirts of town.

It wasn’t until after Stonewall and the start of the liberation movement that San Antonio welcomed a game-changing queer-owned nightclub. The San Antonio Country opened in 1973 thanks to Arthur “Hap” Veltman, and it would help lead the way to the city’s first Pride parade in 1976. The club’s spirit moved to a new home in 1981 at the historical Bonham Exchange building, which remains open today for all members and allies of the community.

The best areas for LGBTQ+ travelers

Although there are some specific LGBTQ+ districts, throughout the city, non-discrimination laws are in place to make sure that visitors have a safe stay while in town.

“Since 2018, the city has received a perfect score of 100 on the Human Rights Campaign Municipal Equality Index, which rates cities based on LGBTQ+ inclusivity,” shares Luke Blankenship, development and communications manager for the Pride Center San Antonio. 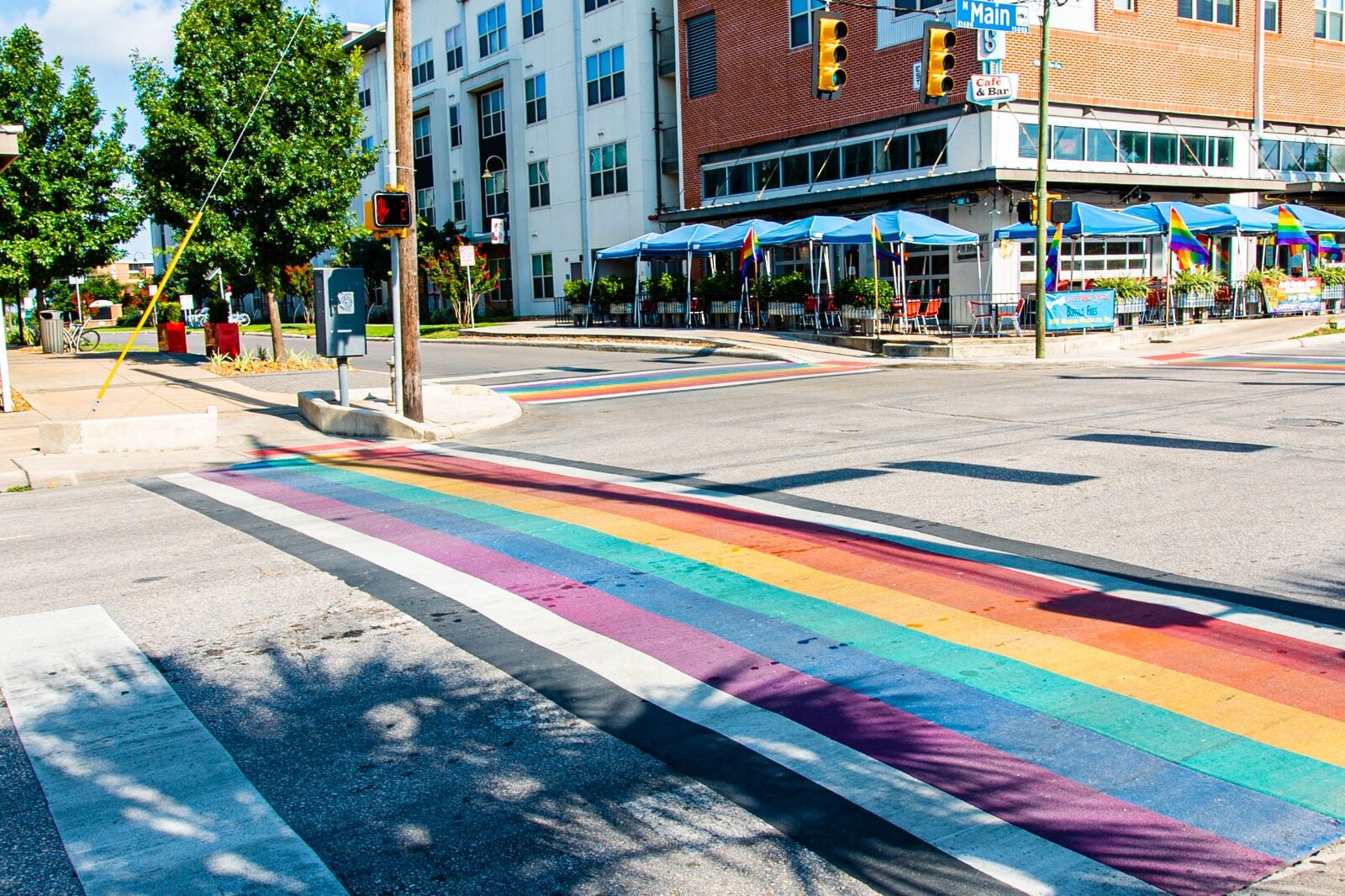 Just north of downtown San Antonio, at the intersection of North Main Avenue and Evergreen Street, you’ll find a rainbow crosswalk to indicate that you’ve made it to The Strip SA — the gay district of the city.

While the colorful crosswalk is only a few years old, the area has been a queer hub for decades with nightclub establishments such as Heat and Pegasus, and the LGBTQ+-friendly Luther’s Cafe that has been serving up burgers since 1949 and today hosts weekly interactive drag brunches.

They also hold several events throughout The Strip, such as an annual Halloween block party and the Pride “Bigger Than” Texas festival, and the nighttime parade. 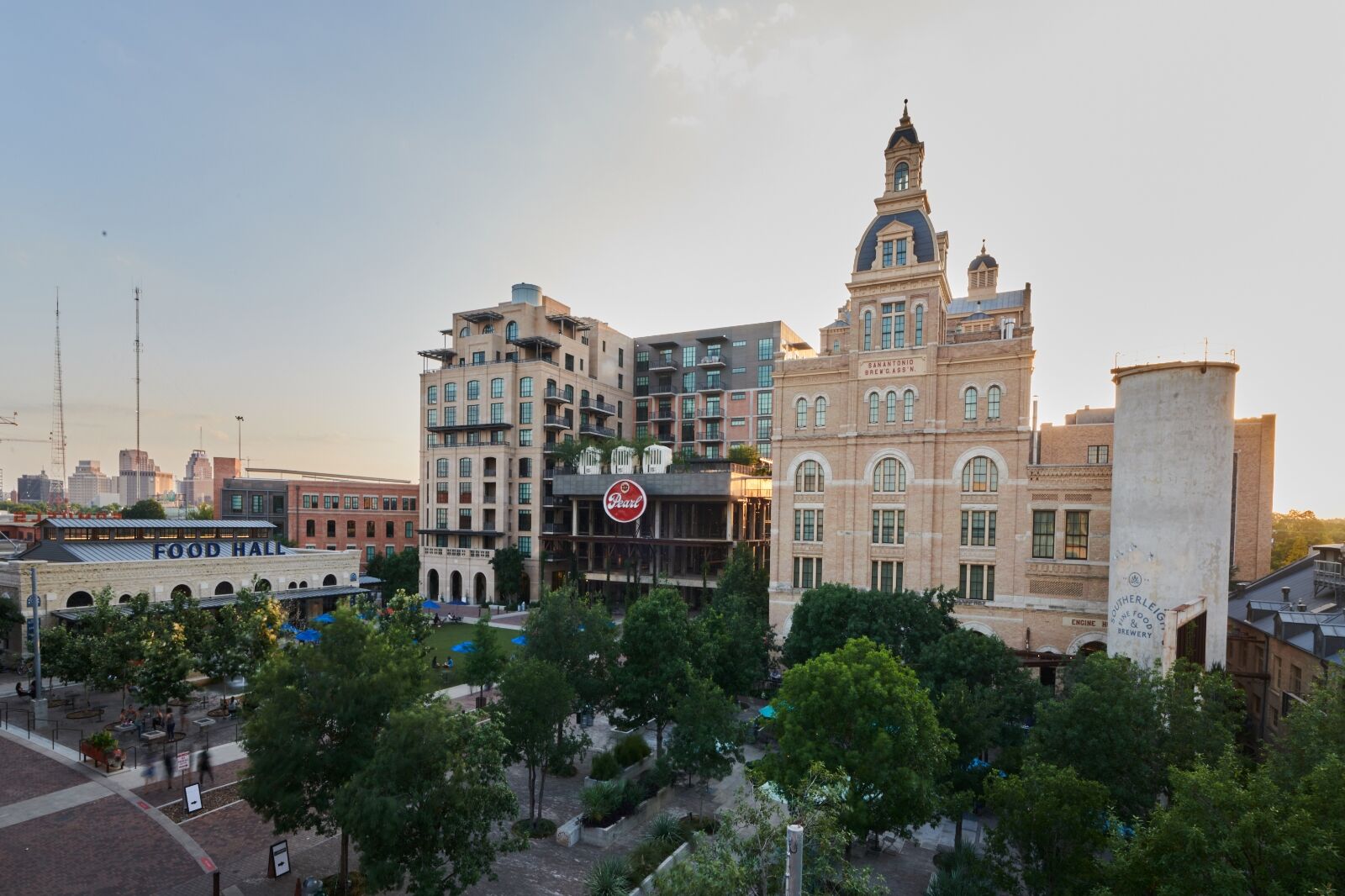 Once home to Texas’ largest brewery and named after it, the Pearl district has grown into a vibrant area for locals and visitors alike. It is home to an array of boutique shops, green spaces, restaurants, and bars. Among the great dining options, the city’s first food hall, Bottling Department, is here, which offers chef-driven local and international eats, a wine and beer bar, and courtyard seating. The Pearl also houses a campus of The Culinary Institute of America, and you can take a cooking class or eat at the restaurant.

There’s always something going on at the Pearl, but on Saturday mornings you can find its very popular open-air farmer’s market for fresh honey, bakery items, dairy products, and more.

And if you want to make a weekend of your time at the Pearl, Hotel Emma is a 146-room riverfront hotel that was originally Pearl’s Brewhouse. You can see remnants of the brewery throughout the establishment, which also has a bar, club room, restaurant, an outdoor pool, and a gorgeous two-story library filled with 3,700 books.

The Pearl is part of the north end of the Museum Reach district of the River Walk. With three miles of pedestrian pathways, you’ll find water features, and public artwork along the walkways. The chic LGBTQ+-friendly rooftop bar Paramour is also a popular spot to hang out, especially in the summer months. 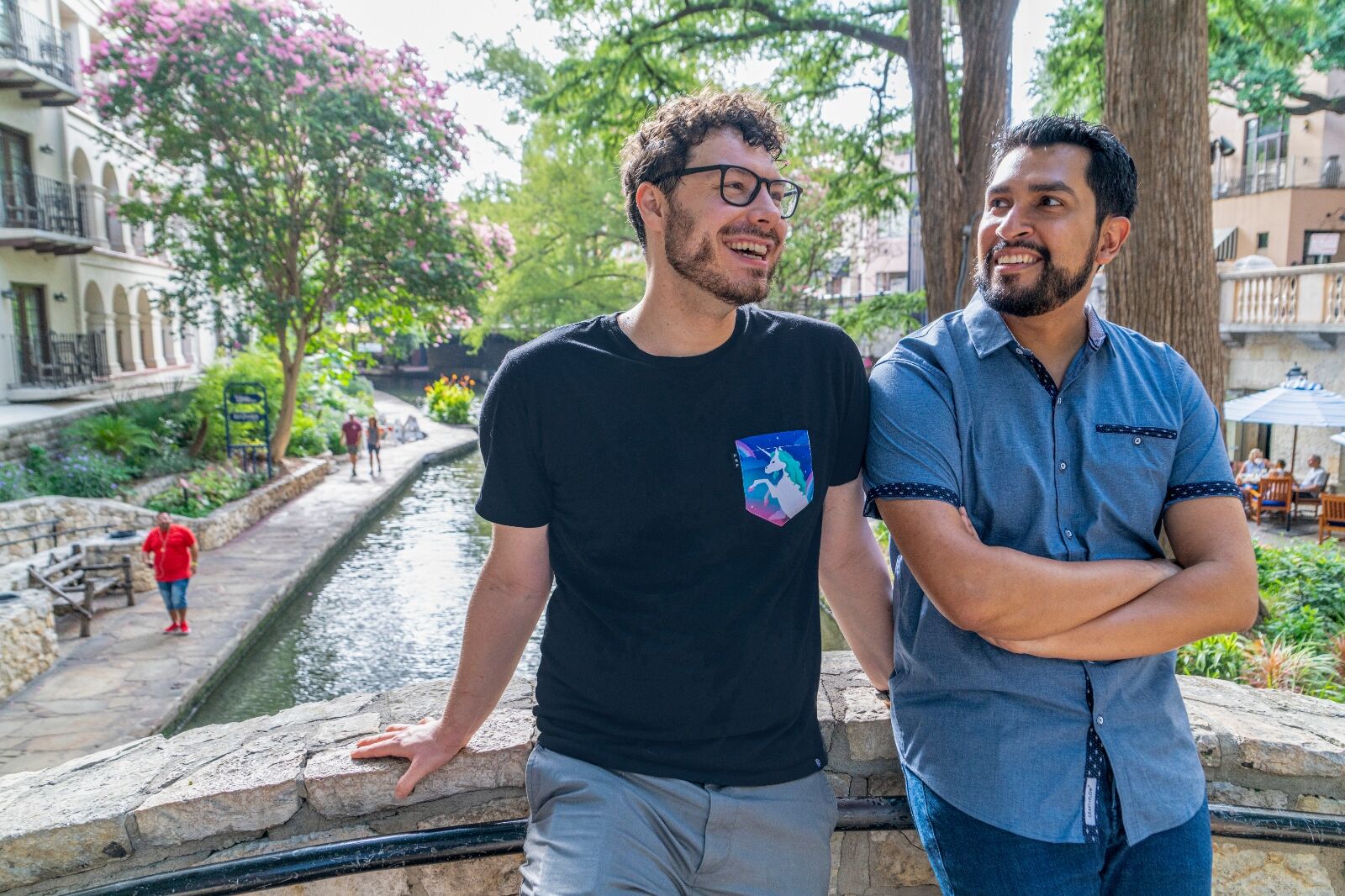 Home to the iconic Alamo, the center of the River Walk, the oldest LGBTQ+ nightclub in town, and a 750-foot-tall observation tower, Downtown San Antonio is the perfect spot to serve as your base.

The Alamo is currently undergoing a transformation to preserve the historic site and enhance the experience for its visitors by adding a new museum and visitor center. Construction will be completed by 2025, and the museum will house the Alamo collection of British rock star Phil Collins, including hundreds of documents, artifacts, weapons, and more. 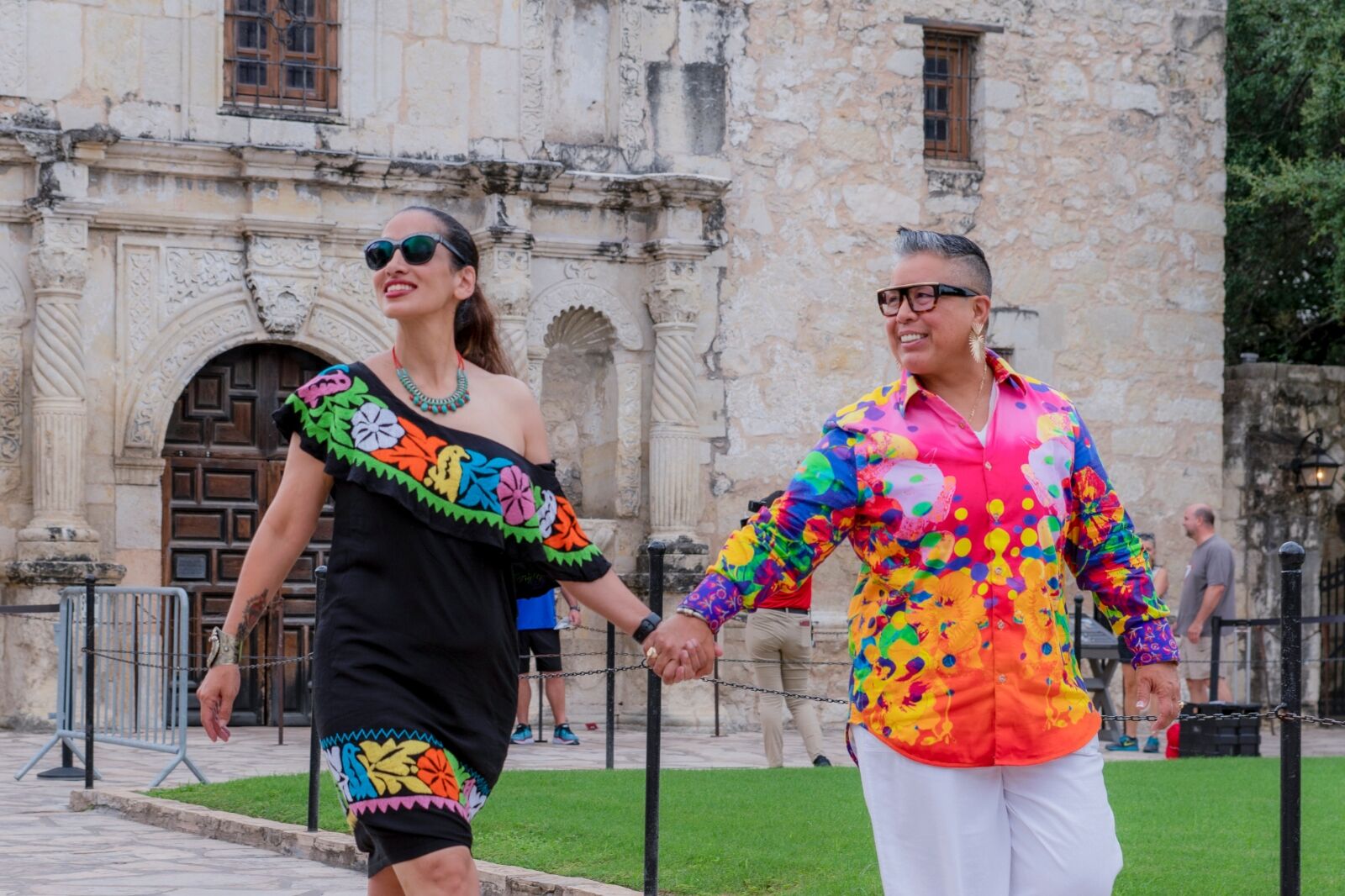 For a fun shopping experience downtown, head to the Historic Market Square. You’ll find three historic blocks of shops and restaurants to peruse and the largest Mexican market in the United States.

While there, Luke Blankenship from the Pride Center also highly recommends checking out Hopscotch, which is an interactive art exhibit that is LGBTQ+ owned and operated. “And if you’re looking for a show, the Tobin Center for Performing Arts is also a pillar of our community and is incredibly LGBTQ+-friendly,” he adds.

A great dining option along the water is Boudro’s, a River Walk staple, offering table-side guacamole, prickly pear margaritas, and a range of tasty seafood and bistro eats. And back at the Historic Market Square, Mi Tierra serves superb Mexican food and bakery items in a festive space. And for an upscale dinner, Landrace from James Beard Award finalist Steve McHugh spotlights local Texas ingredients in an open-fire kitchen. 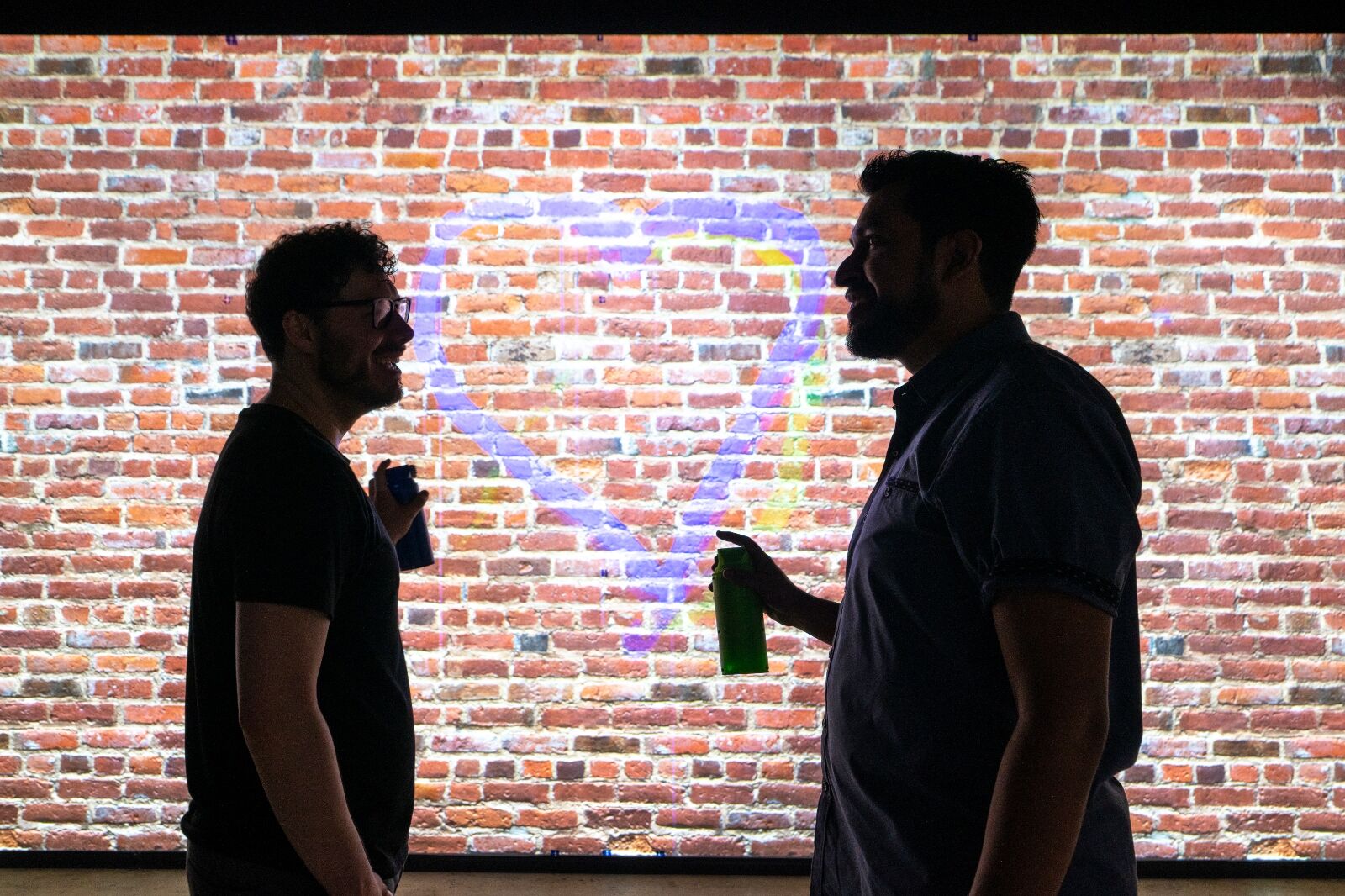 There are over a dozen queer bar and club options, and several LGBTQ+-friendly bars that are popular for the community to drink, dance, and enjoy local drag queen shows. From Downtown to the north of The Strip, here are seven venues to not miss while in town.

The iconic Bonham Exchange is a three-story dance club in a historic 19th-century building Downtown. The oldest LGBTQ+ nightclub, it’s one of San Antonio’s hot spots for the community and its allies.

An 18 and up club, you’ll find all kinds of revelers here among the 10-bar-complex. Within the multiple spaces, you’ll expect DJs spinning hits, remixes, and dance classics, and a laid-back patio in the backyard with food and games. Over the years, Bonham has seen the likes of Tina Turner, The Bangles, Iggy Pop, Taylor Dayne, RuPaul, Manila Luzon, and San Antonio’s own Drag Race alum, Jorgeous.

Paramour at the Phipps

Renowned for its rooftop space, Paramour is an LGBTQ+-friendly bar along the River Walk in the city’s Museum District. Home to two drag brunch shows every Sunday, drag burlesque, and male revue performances, Paramour is also the base of Kristi Waters, named the Best Drag Queen in San Antonio by San Antonio Current in 2020.

Open seven days a week year-round from 2:00 PM to 2:00 AM, Pegasus is the oldest LGBTQ+ bar in The Strip. There’s a main bar, karaoke area, an outdoor patio (where they hold drag shows), and a music video room.

The gym sports bar trend hit San Antonio a few years ago, and Knockout opened in 2016 in The Strip’s main area. The laid-back bar has 15 flatscreen televisions, pool tables, and dart boards. When it gets busy, a second bar opens in the backroom. While all the bars on The Strip have different drink specials, you’ll definitely find the best here throughout the night.

Right next door to Knockout is Sparky’s Pub, a spacious English-style bar with a dance floor, pool tables, a front and back patio, and a couple of full-service bars. Sparky’s hosts a trivia night on Tuesdays, and there’s also a wine bar and cafe here for light snacks.

The Strip’s main LGBTQ+ nightclub for the past 21 years, Heat is open Friday to Sunday to everyone 18 and up. A multi-space club, you can dance the night away with performing dancers and drag queens as DJs spin with an enchanting light show. As an after-hours spot, it doesn’t fill until midnight and the party can go on until 4:00 AM.

If you need your cowboy fix, head northwest of The Strip to the SA Country Saloon. Located right across from the Alamo Candy Company, this laid-back gay country bar has a big and fun dance floor. Open every day, there are also karaoke, drag shows, dance lessons, and adult bingo nights. 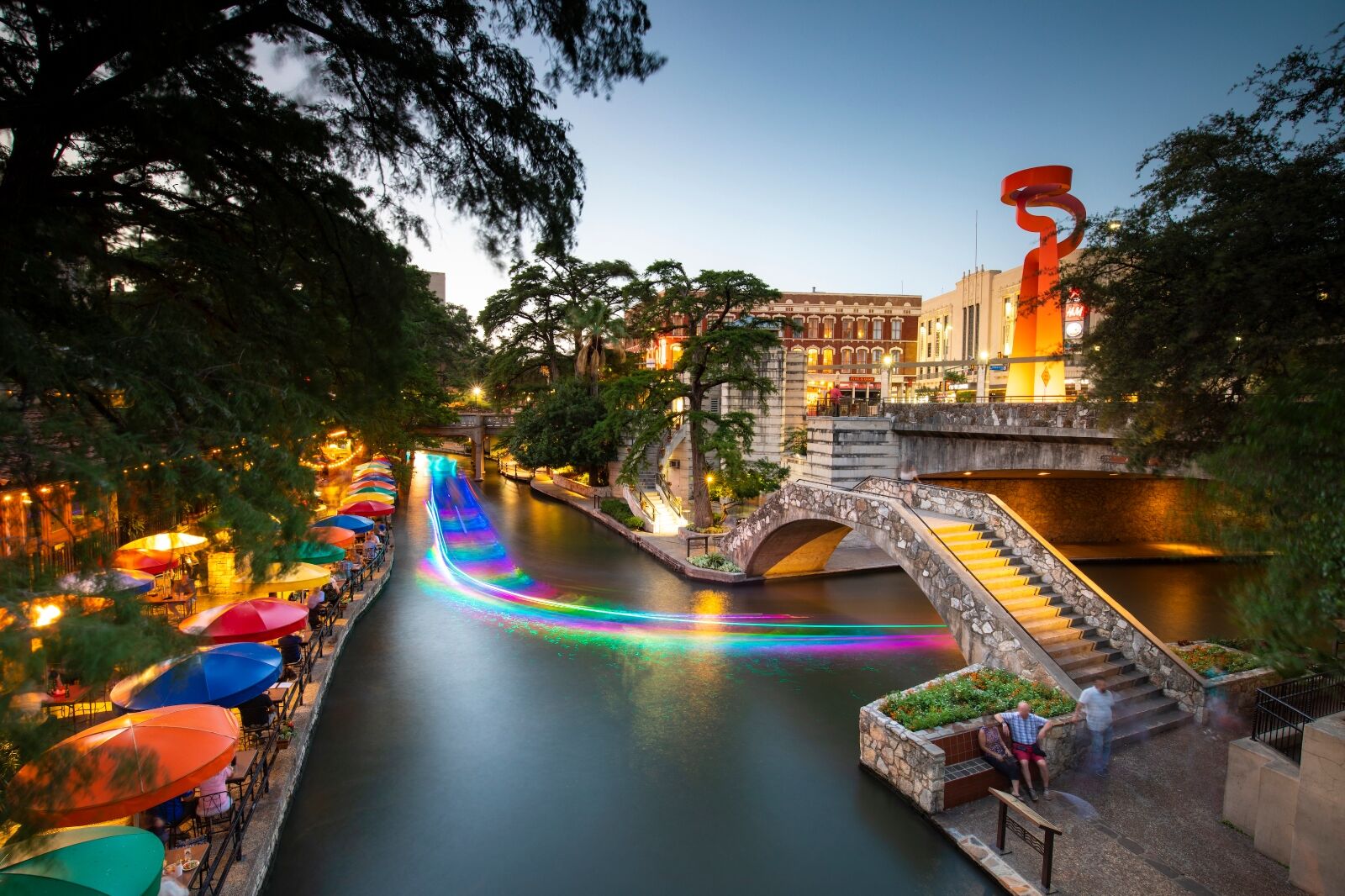 For its ninth edition, San Antonio Q Fest will take place in the Public Theatre of San Antonio in October. As an international LGBTQ+ film festival, it has brought awareness to the greater San Antonio region by showcasing film pieces created for, by, or about the LGBTQ+ community.

When: October (dates are subject to change annually)

The city’s signature event since 1891, Fiesta started as a single parade event to honor the memory of the Battle of the Alamo. It’s now an 11-day celebration that also commemorates San Antonio’s diverse cultures and heritage with over 100 events. From parades, concerts, delicious food, and block parties, the Battle of Flowers and Fiesta Flambeau parades are among the biggest events held during the festivities. 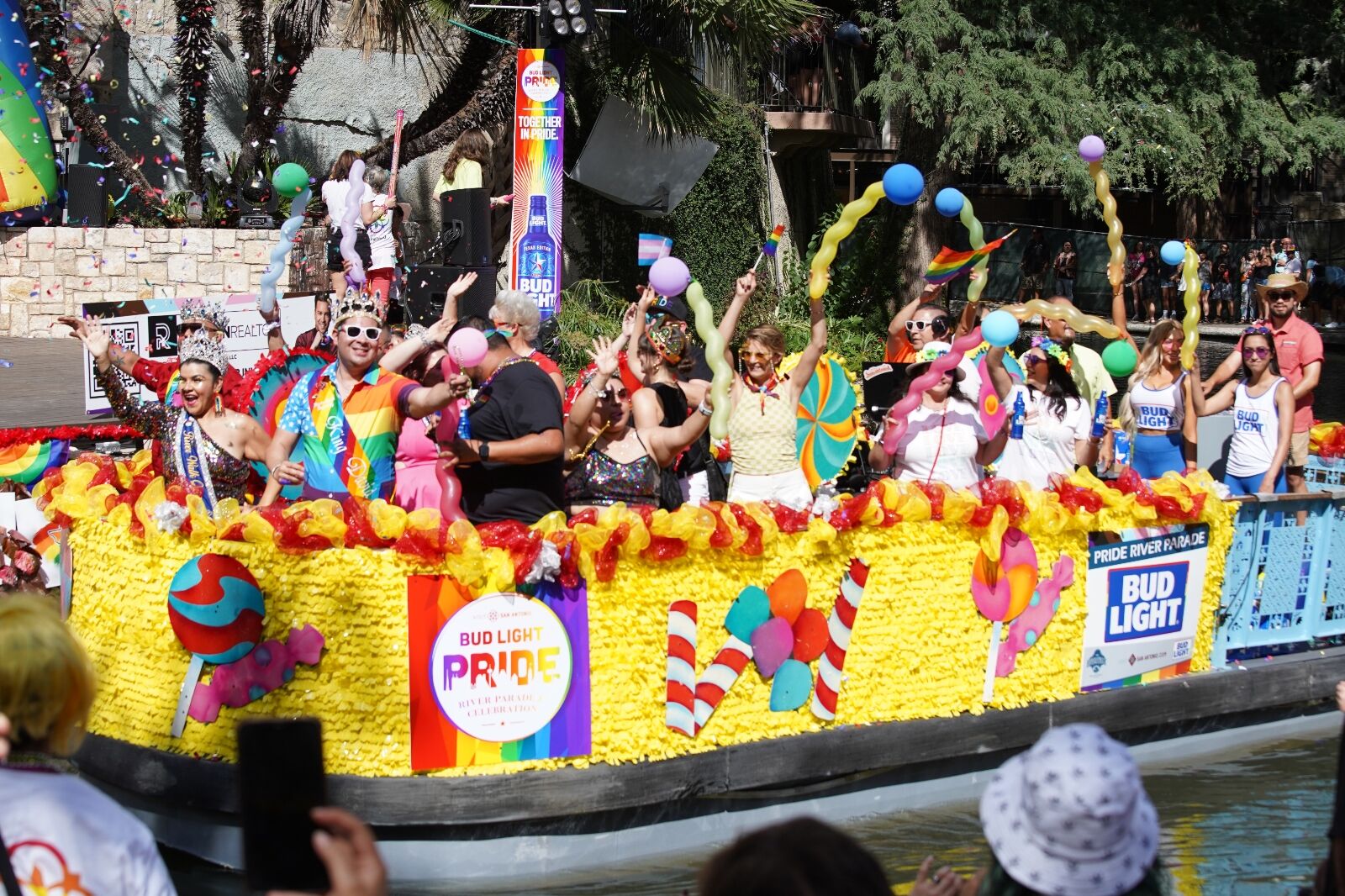 Held to promote the city’s inclusion and support of the LGBTQ+ community, the all-day celebration kicked off at the La Villita’s outdoor performance theatre with live on-stage entertainment from DJs, dancers, and the city’s best drag queens. The parade saw over 17 barges float by and join the party, after which they held an encore show in the Museum Reach.

They held the first Pride march in San Antonio in 1976 with 35 participants, and now it’s a week of events that brings thousands together to celebrate. There’s a Pride night at the zoo, LGBTQ+ sports events, and other celebrations that lead up to the Pride “Bigger Than” Texas Parade and Festival.

The all-day festival takes place in Crockett Park, just south of The Strip, and a high-heel race is held just before the nighttime parade kicks off at 9:00 PM. The parade then marches down a mile route along Main Ave, and there’s a block party hosted by The Strip with drag performances and music until 4:00 AM.