The holiday season is for eating. All around the world, food and drinks are the centerpieces to gatherings of family and friends. What’s on the menu depends on where you are, and the dishes that make it to a plate and the drinks poured into glasses are often cherished regional and family recipes.

We caught up with chefs who’ve run Michelin starred restaurants, home cooks, recipe developers, and writers to learn more about the recipes that make the holidays sing. 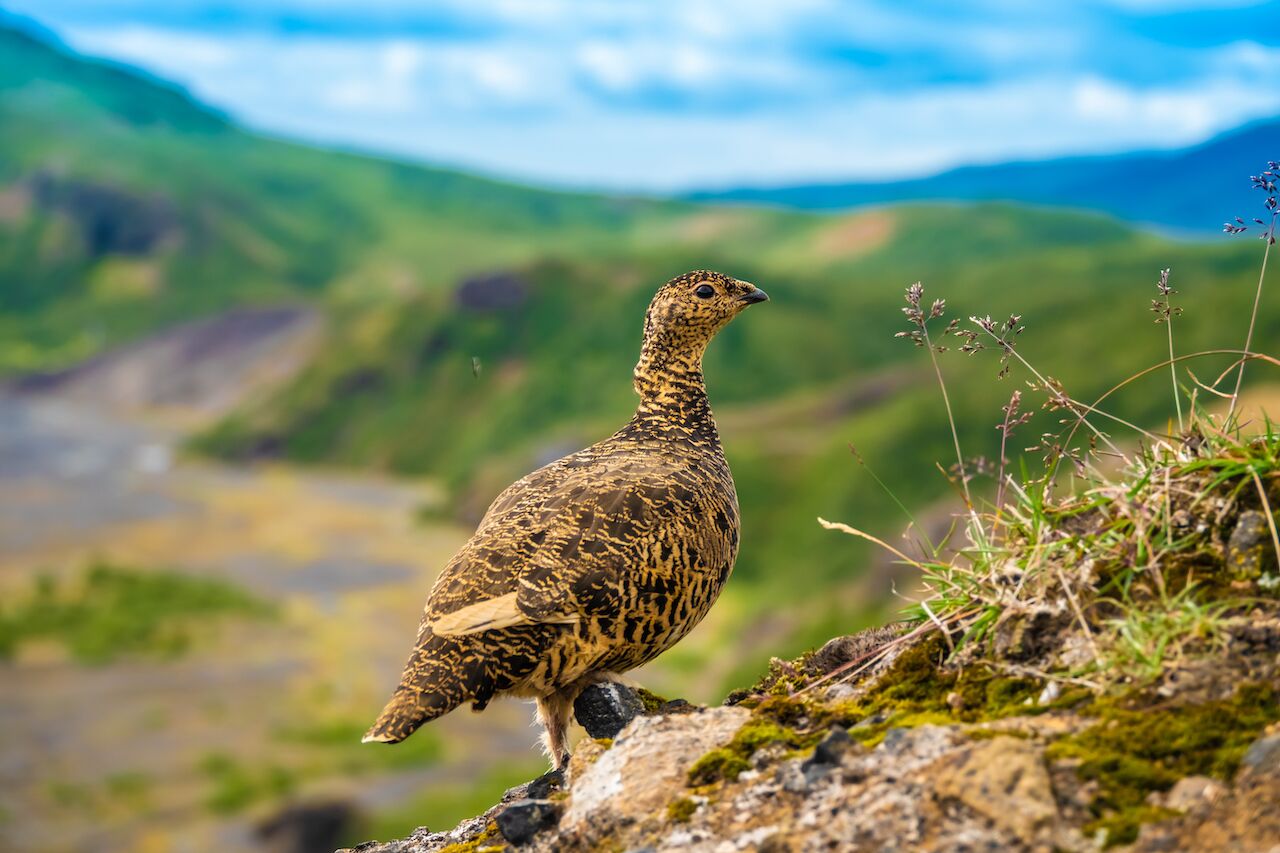 On Christmas Eve, many Icelandic people enjoy a feast of ptarmigan, or wild grouse. This small, pheasant-like bird roams the country’s grassy hillsides. Once upon a time, rjúpa, as its known in Iceland, was strictly peasant fare that was reserved for poor families who couldn’t afford to eat lamb around the holiday season. In fact, ptarmigan was flat-out looked down on by the aristocracy. Then in the 1920s, the bird became a much more popular and widespread addition to the Icelandic Christmas dinner.

According to Adam Biernat, the blogger behind Bite of Iceland, a traditional Christmas ptarmigan is hunted in the wild. But the crafty birds are hard to catch, so some families opt to simply buy a British grouse instead. Regardless of how the bird is obtained, it’s often served with potatoes, boiled red cabbage, and a sauce made with red currant jelly and blue cheese or brown whey cheese.

Lori Bogedin, a chef and culinary expert from Pennsylvania who has run TwigsCafe for more than 20 years, has a traditional Christmas ptarmigan recipe if you’re able to get your hands on a bird. 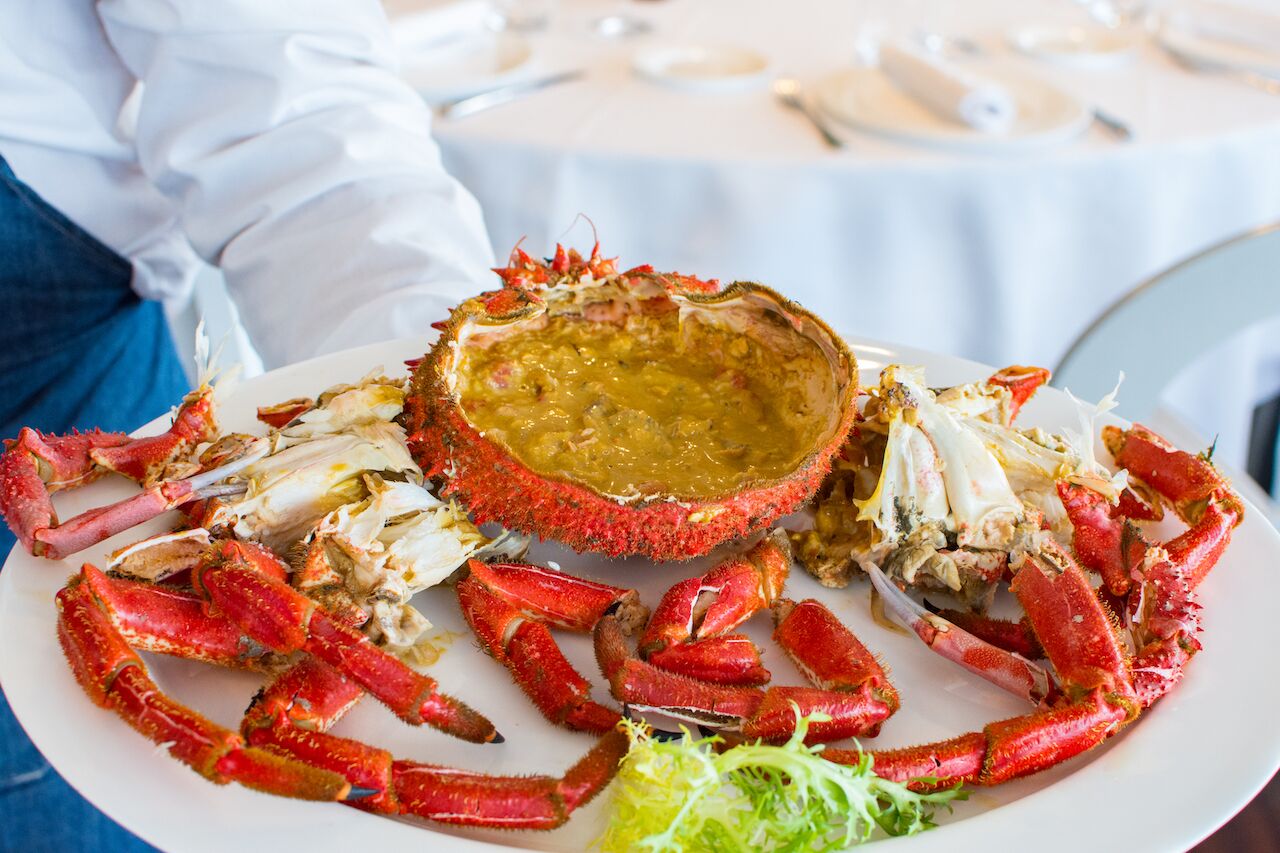 Around the coastal regions of Spain, seafood is often a centerpiece on the holiday dinner table. That was very much the case for chef Dani Garcia when he was young, who grew up in Marbella, a small coastal town along Spain’s stretch of the Mediterranean. Christmas meals would start with cuts of Iberico ham and then transition langoustines, and then to a spider crab called centollo. After, there was always lamb (usually shoulder).

Garcia’s grandmother, mother, and father shared the cooking duties when Garcia was growing up. These days, the chef, who ran his eponymous three Michelin star restaurant until 2019 and recently opened Casa Dani at Citizens New York, says he has to do the cooking on family holidays now. And while things are carefully measured at his restaurants, he adds that the crab was always cooked by taste growing up. 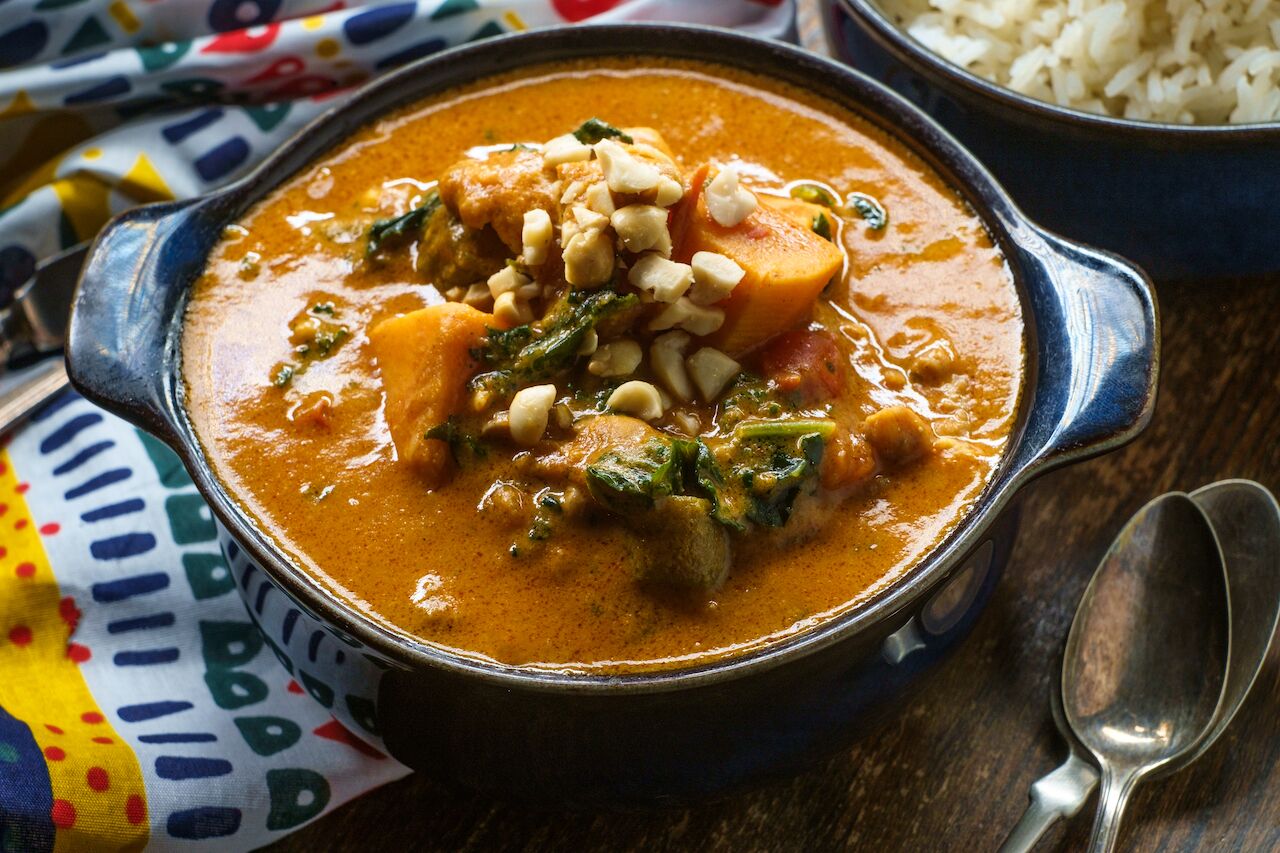 Few things can warm up a person’s soul on cold winter days like soup. Every culture has its own soups, and for James Beard award winning chef Nina Compton, who is currently heading up Compère Lapin at INTERSECT BY LEXUS, West African peanut soup is the perfect dish to add some warmth and spice to the table.

“The peanut soup is great for the holidays and is a soulful soup, especially on cooler nights,” Compton says. “I like to call it a warm hug in a bowl that makes you smile.”

Fried Rice: Place the rice in a noodle basket and fry until golden brown and crispy at 325 degrees, season with salt immediately and reserve.

Jerk Peanuts: Toss the peanuts in olive oil and gently coat evenly with jerk seasoning and bake at 300 degrees for 12 minutes. Cool and pulse in the robocoupe three times. 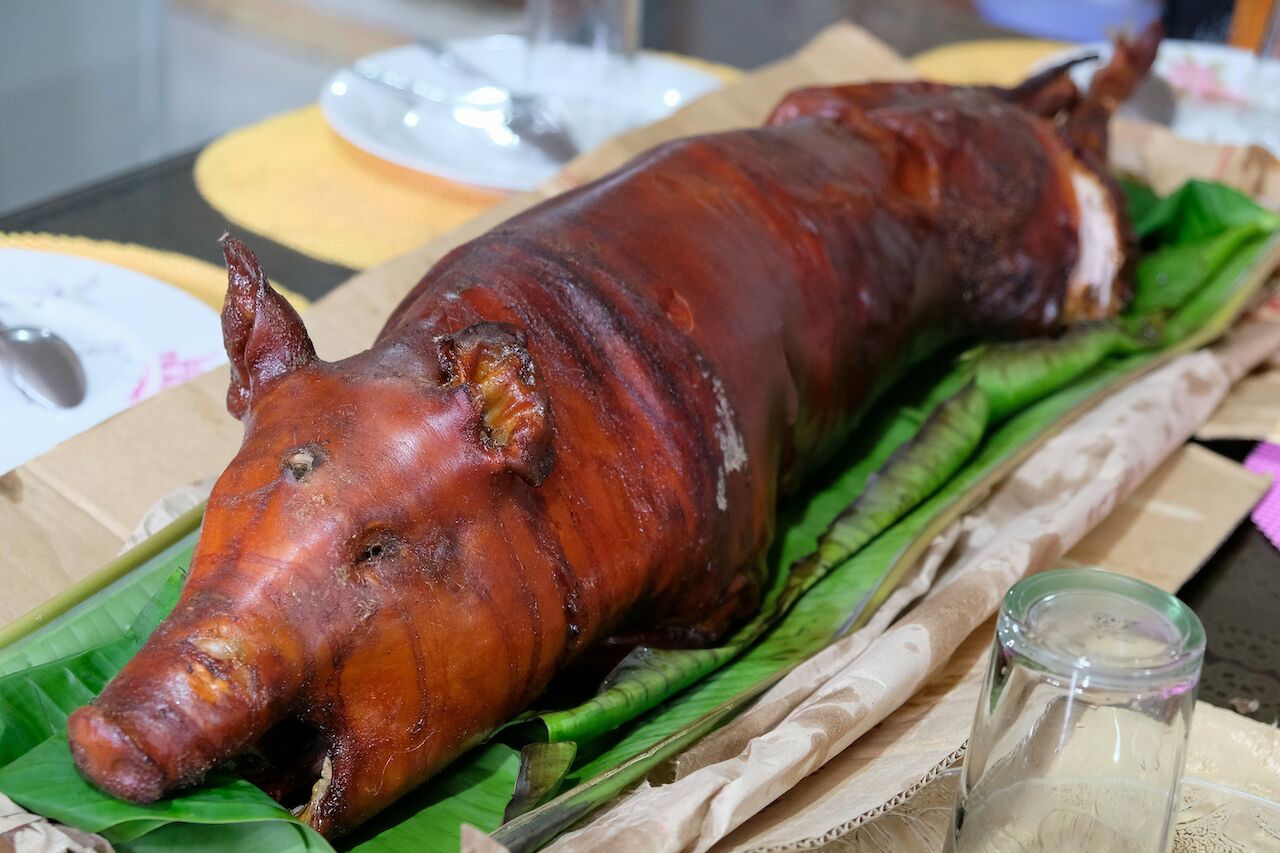 Lechon is a whole roast pig cooked slowly for hours over a spit, and it’s one of the most treasured Christmas meals in the Philippines. Its signature crispy, dark red skin that’s rubbed with coconut water, soda, or soy sauce is cherished, but the whole pig is mouth-wateringly delicious — the belly is often opened and stuffed with herbs and aromatics like leeks, garlic, and lemongrass.

Roast pig originally came to the islands with Spanish colonists along with Christianity (hence the Spanish name for the dish — lechon translates to suckling pig). If you’re in the Philippines for the holidays, you can expect to see lechon on the menu at both household gatherings and restaurants. Cebu, a city in the southern Philippines, is known for its exceptional lechon — in fact Anthony Bourdain called the lechon he tried there, “the best pig ever.”

While your barbecue may have the choicest cuts of meat, nothing matches the whole-hog experience of lechon. This recipe is from Bogedin, of TwigsCafe.

Slowly add orange and lime juice to the marinade, and pulse until smooth. 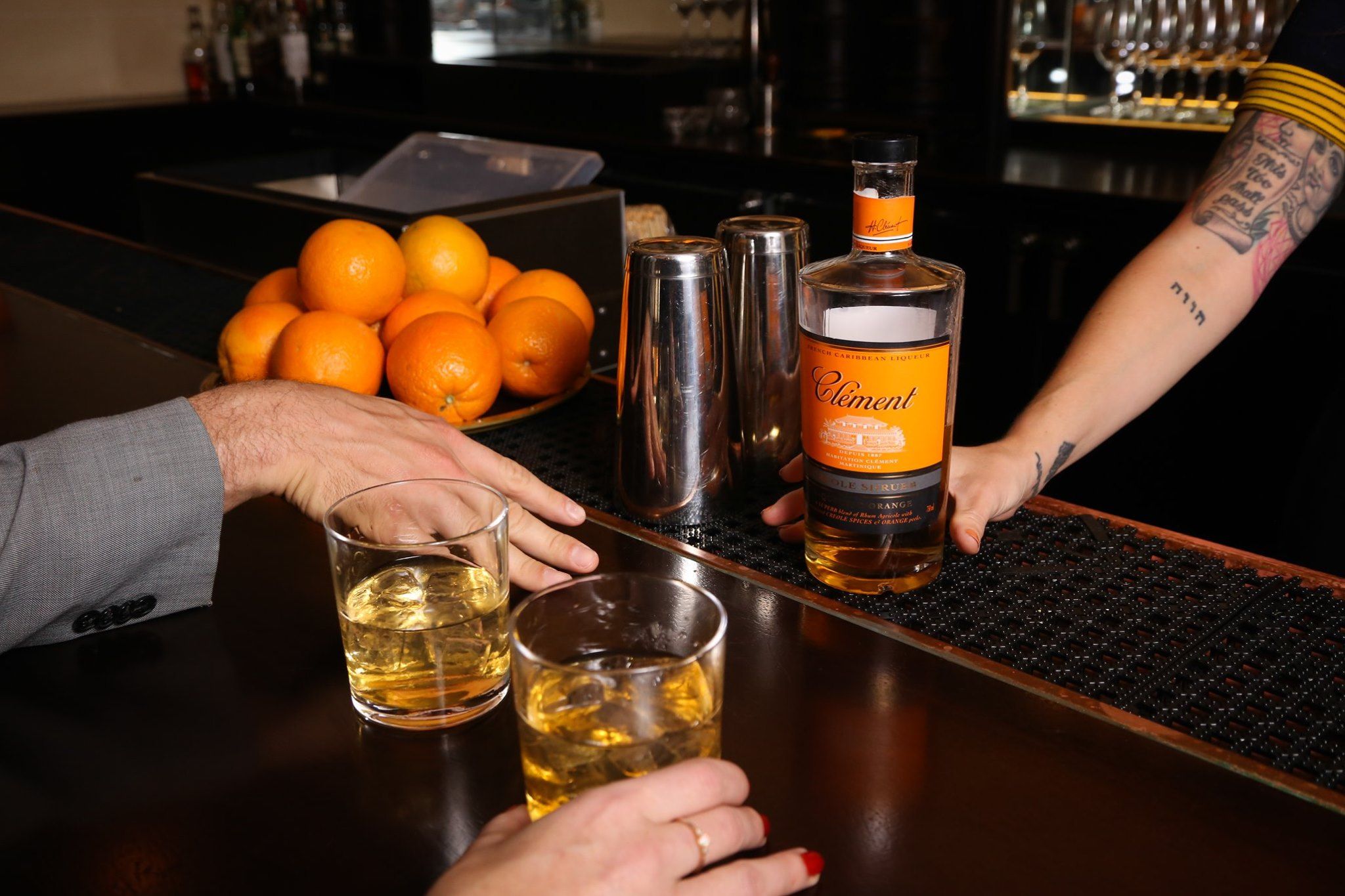 Thick holiday drinks are lovely in colder weather, but people on the Caribbean island of Martinique opt for something a little more uplifting: shrubb (not to be confused with vinegar-based shrubs with one “b”). This infused drink is made with overproof rhum agricole, citrus, cane syrup, and spices. It’s drunk from All Saint’s Day on November 1 (called Toussaint) through Christmas Eve. Importantly, it holds a special place during caroling parties on December Fridays called Chanté Nwel.

While every family has their own special recipe, there are also store-bought shrubbs available from Rhum J.M. in the United States. Making it yourself is easy and the most sure way to get the exact flavors you’re looking for, though. Just make sure you start with rhum agricole from Martinique, which is fermented from raw sugarcane juice rather than molasses and has a funky vegetal flavor. 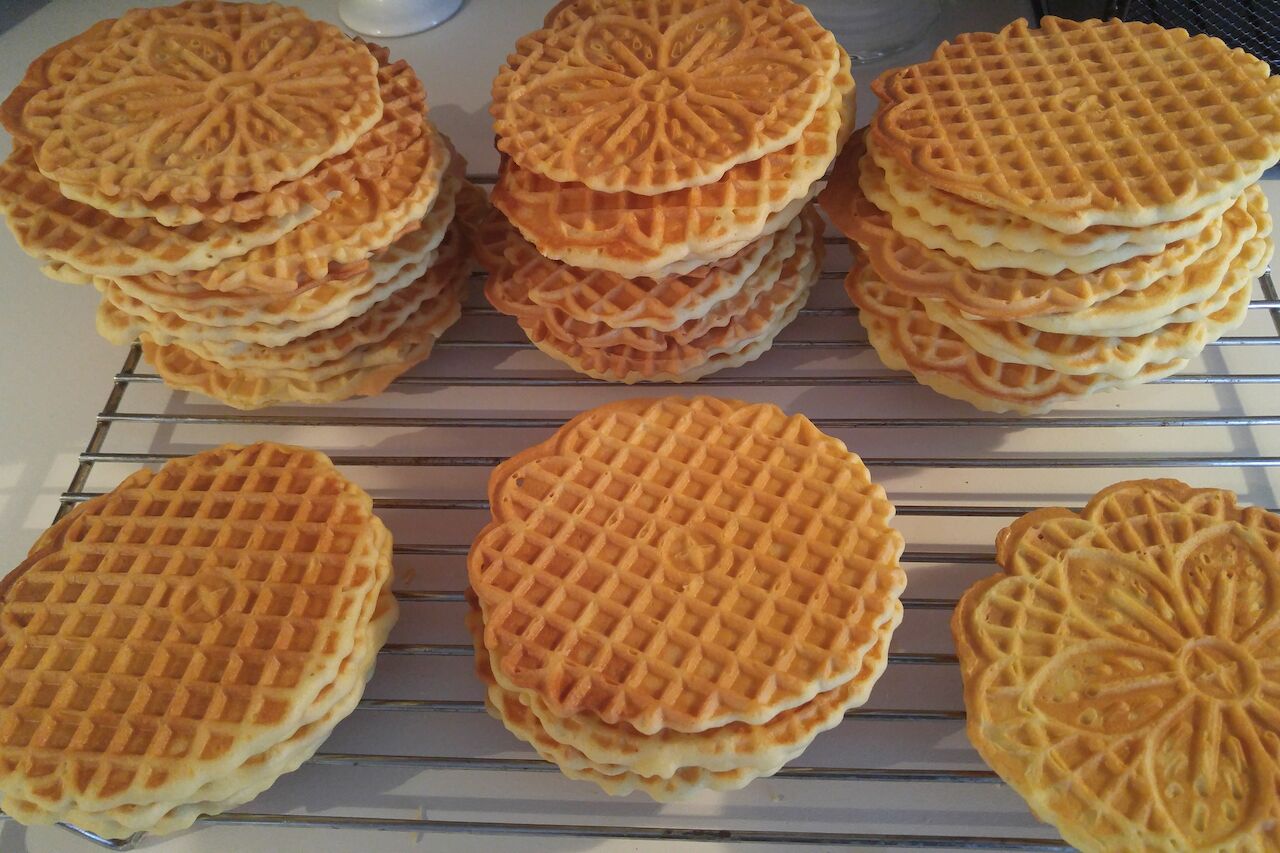 These flat cookies are an Italian favorite at weddings and around Christmastime. They look somewhat like flat (pizze means flat), tan snowflakes and require a special waffle iron to make. Sometimes the cookies are covered in powdered sugar, other times they’re served plain. Pizelle originally hail from Abruzzo, and by some accounts, the cookie’s history can be traced back to the Ancient Romans in the 8th century. However long they’ve been around, they’re a holiday season staple today.

“My Italian grandmother used to make them every year for the holidays,” says Liz Mincin, the blogger behind Waiting for Blancmange, “and the technique was passed down to me.” 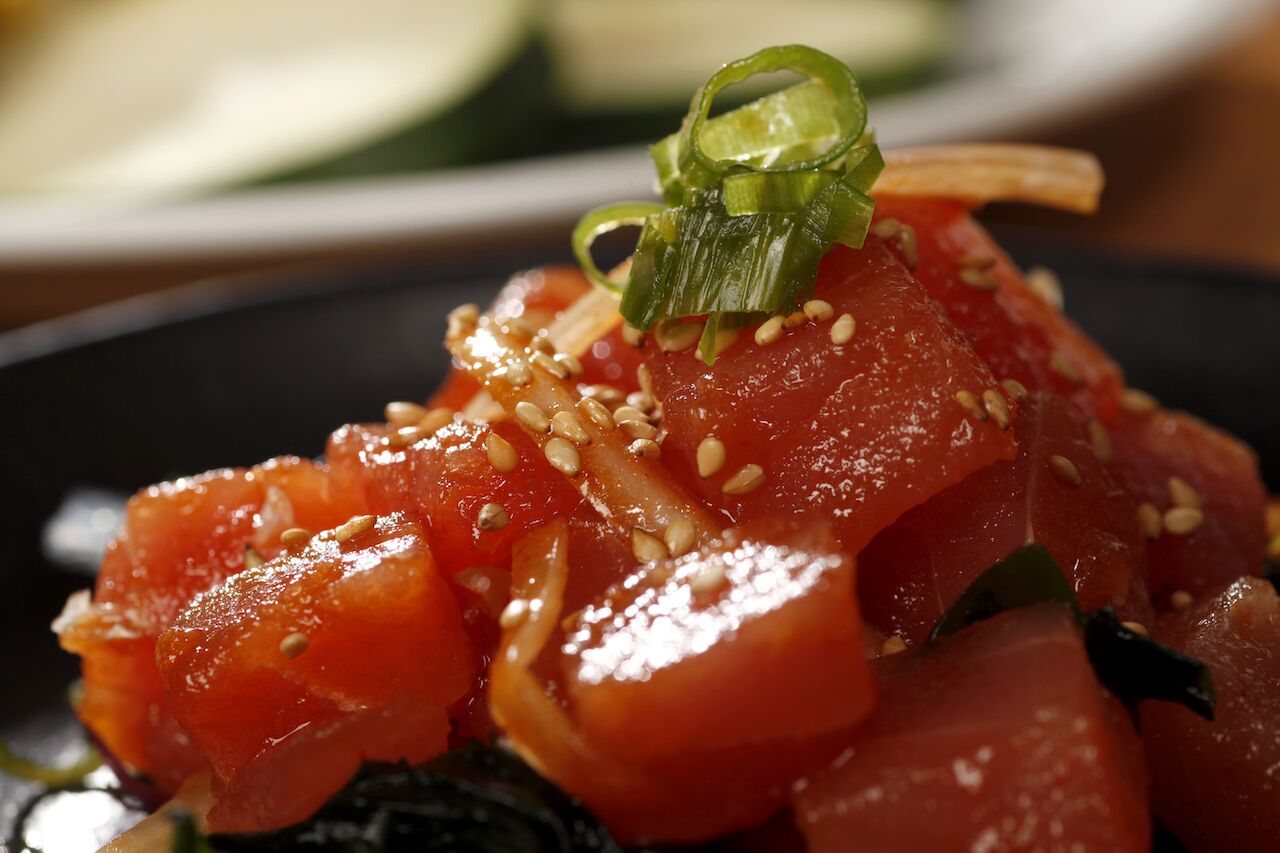 True poke from Hawai’i is a special dish. The name simply means “to slice or cut,” and it’s not restricted to pieces of fish — though some of the most cherished are made with ahi.

Ahi poke is always on holiday tables in Hawai’i, says Kiki Aranita, who ran Philadelphia’s Hawaiian-inspired restaurant Poi Dog and now has her own line of signature sauces. And if there’s every any leftovers the next day, Aranita’s dad’s secret weapon was make fried poke omelets in the holiday season.

“Poke Omelettes are special to me because they taste like a memory,” Aranita says. “Packed into my grandmother’s tiny kitchen at Thanksgiving and Christmas, my family hovers over a vast array of food: fresh fish pokes, fried noodles, creamy dips, and so much more. Over the course of the night, as people start to leave, my aunts, uncles, and dad divvy up the leftovers and make plans for them. As we divide, we get hungrier and at some point — maybe that night, maybe the following morning, he’ll make these poke omelets.” 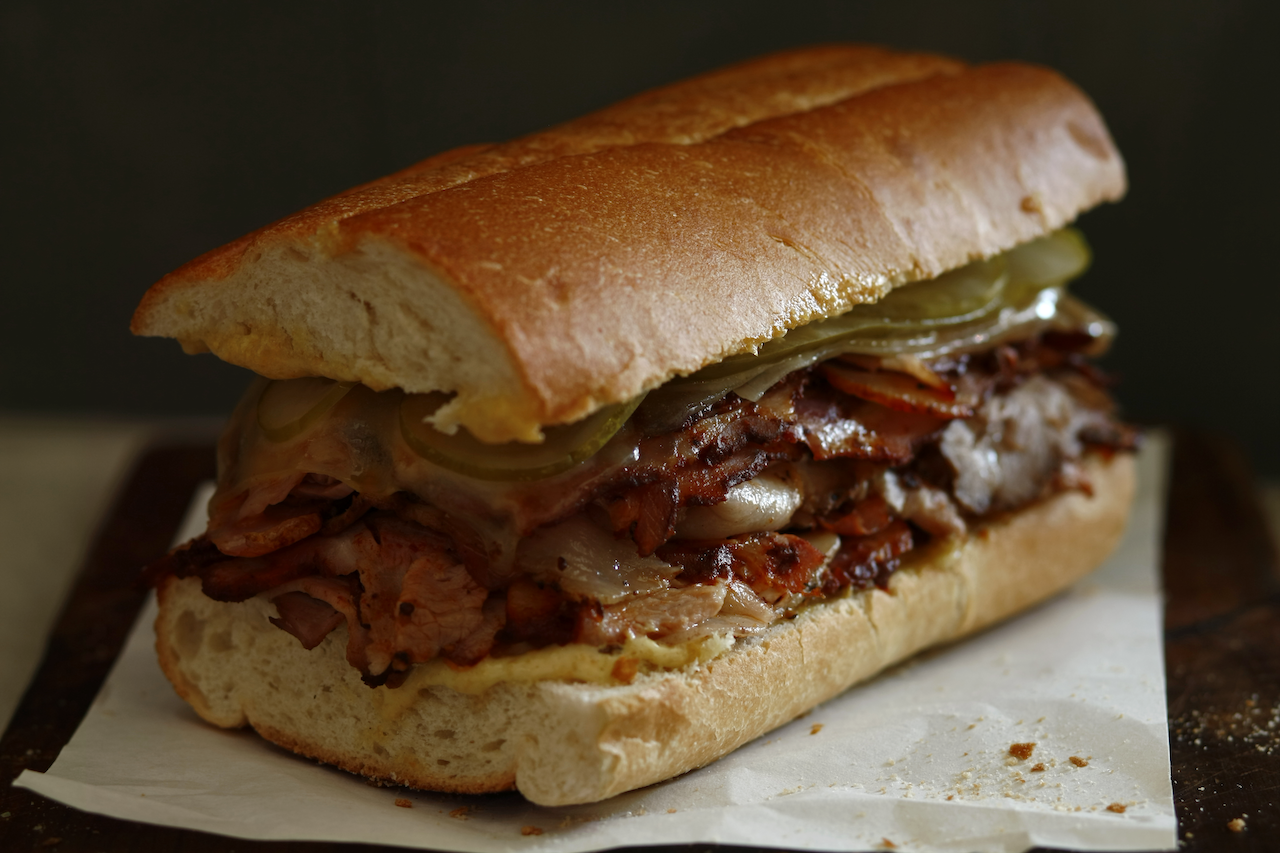 “In my family, the big Christmas meal happens on Christmas Eve,” says Jose Garces, a James Beard Award winner, Iron Chef, and entrepreneur. “For as long as I can remember, Christmas Eve meant Slow Roasted Pork served with traditional Ecuadorian sides like warm hominy salad and my mom’s mashed potatoes. The next day, we make roast pork or Cuban Sandwiches in our pajamas and enjoy the time with family. This recipe for Cubano Sandwiches is simple and delicious.” 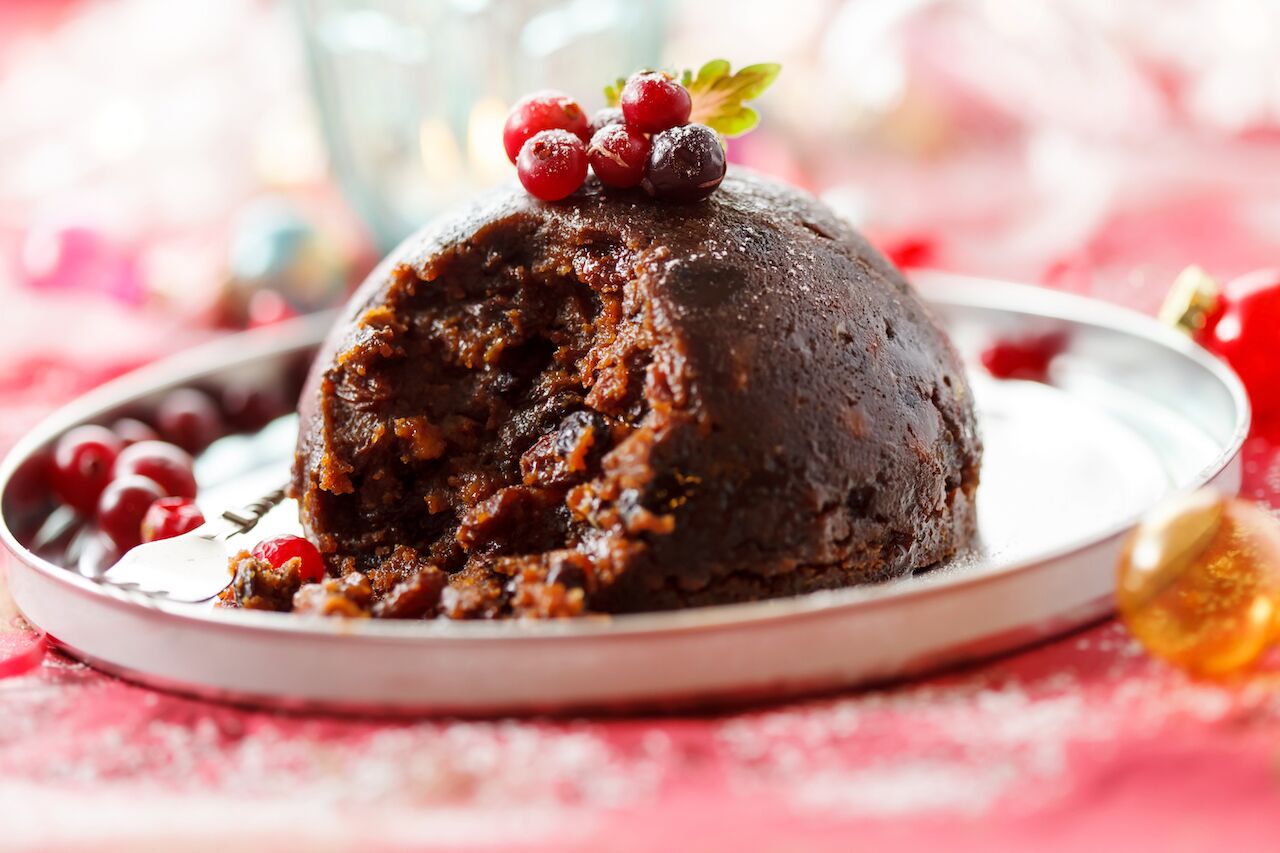 Christmas pudding is known by a couple of names, plum pudding and figgy pudding among them. For those in the US who are more familiar with the type of pudding you eat with a spoon, this is more like a bread sausage of suet (beef fat), dried fruits, and spices. And boy is it beloved. It’s featured in Charles Dickens’ “A Christmas Carol” and is the food carolers demand in “We Wish You a Merry Christmas” as they scream for more figgy pudding.

“I regularly make British traditional Christmas foods for my husband, who is English,” Mincin, of Waiting for Blancmange, says. “Christmas Pudding is a particularly special food for the holidays. The Christmas pudding is essentially a rich and dense fruit pudding, soaked in rum and customarily made by the whole family on Stir Up Sunday (the last Sunday before Advent). The Christmas pudding also has a fun tradition where you add a token (usually a coin) to the batter before baking. Whoever gets the coin when the pudding is sliced is meant to have good luck. My mother-in-law always adds one coin for everyone who will be at her Christmas table!” 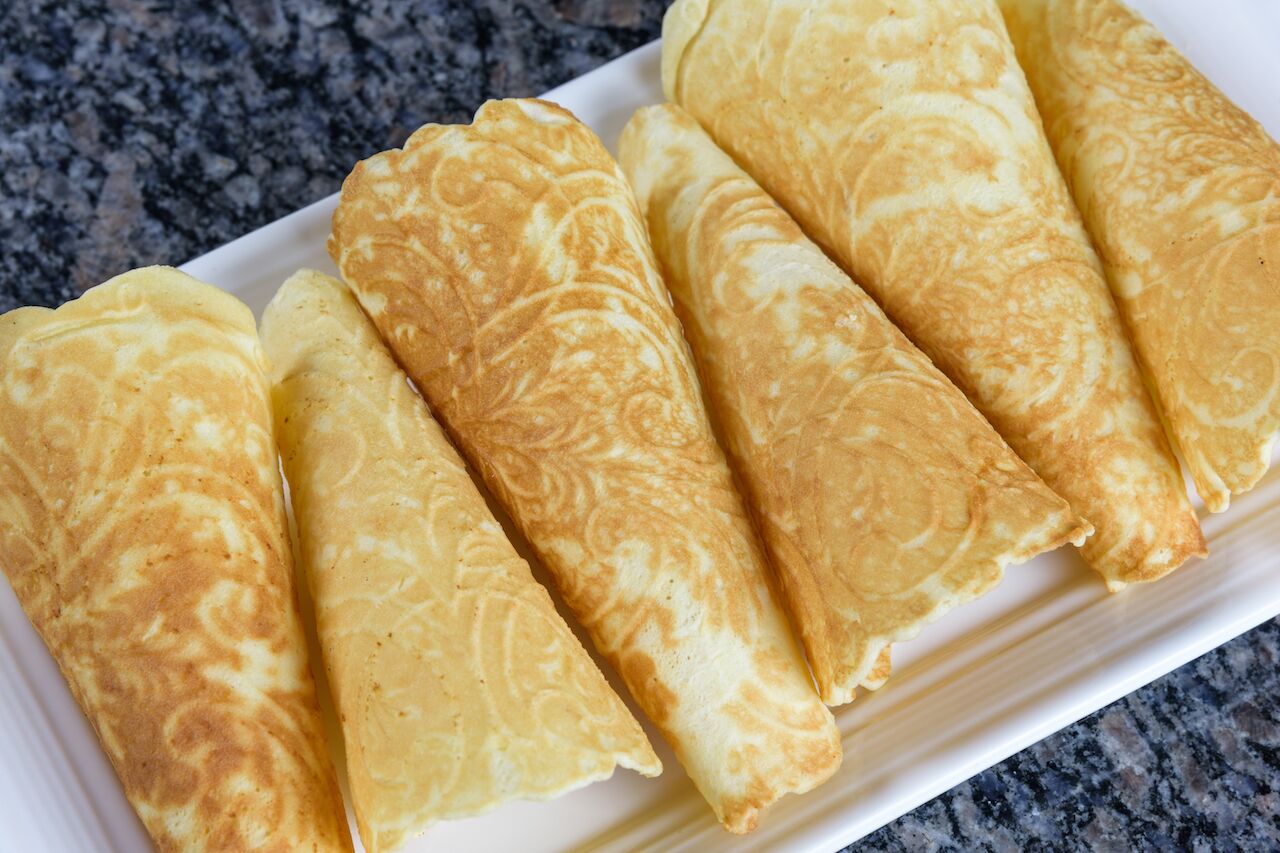 Whereas Italy has its pizzelle, Norway has its krumkake. This holiday season treat is another type of thin cookie with seasonal patterns pressed into it from a specialized waffle press, but in Norway it’s traditional to roll it and fill it with whipped cream, fruit, or chocolate. The deviation from pizzelle is right there in the name: krumkake roughly translates to bent cake.

The best krumkakes are made with a dedicated krumkake iron, notes Ben Myhre of Ramshackle Pantry, and each one has its differences. He adds that the Norwegian holiday sweet is also popular in the US in the upper Midwest. 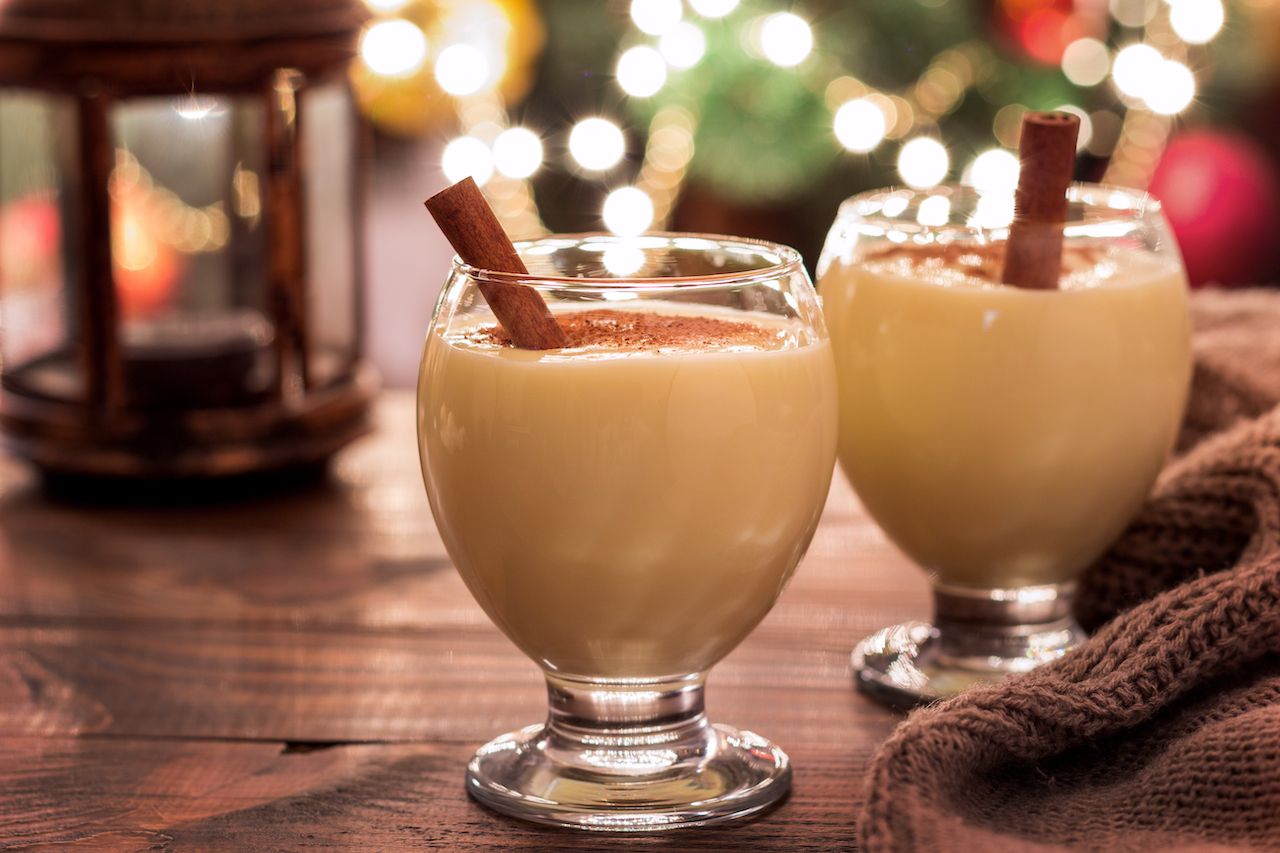 You’re probably familiar with eggnog. This creamy concoction is thought to have started with 13th century monks in Britain who drank a warm eggy, figgy punch called a posset. American colonists would mix their egg and cream with rum, which was the most available spirit, and even George Washington is said to have had a house recipe. Today, it’s often available in grocery stores before the Halloween decorations are put away. For the best eggnog, you have to make it yourself, though.

True eggnog fans can follow the advice of Aaron Goldfarb, drinks writer and author of Gather Around Cocktails: Drinks to Celebrate Usual and Unusual Holidays, who ages his eggnog. Goldfarb has a batch of five-year-old eggnog in his fridge, but told Matador in 2019 that homemade eggnog peaks in the first couple of months. In his book, he offers the following recipe. 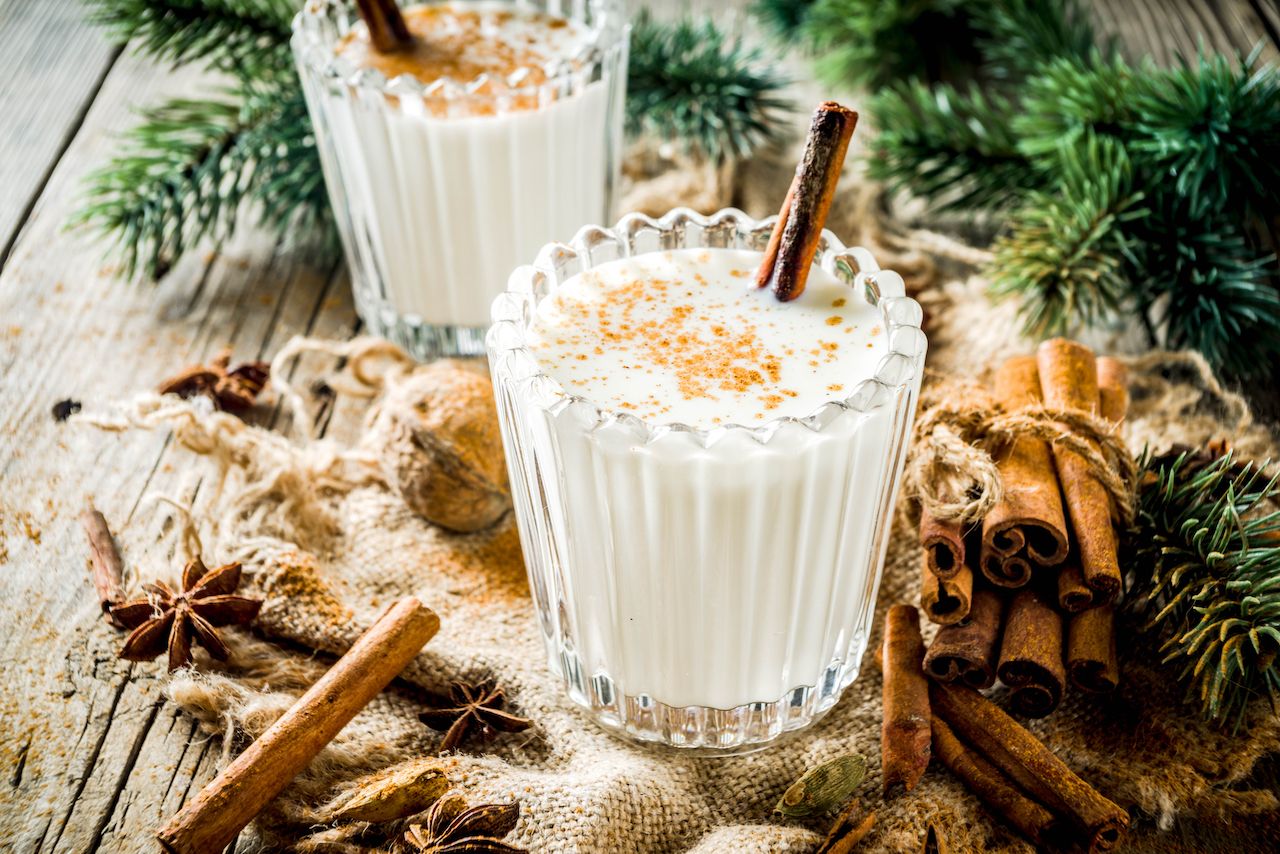 Just because Puerto Rico is a tropical island doesn’t mean everyone ditches the creamy holiday drinks. Coquito translates to “little coconut” in Spanish, and refers to a drink made with a mix of condensed milk, evaporated milk, and cream of coconut (plus a heavy hand of rum, of course). As Aryana Azari wrote for Matador in 2019, the Puerto Rican drink can be found around the Caribbean and Latin America, and each country — and each family — has their own specific recipe with small twists that make the beverage special. If you lack a recipe of your own, Discover Puerto Rico offers a good basic recipe to start with.

Food + Drink9 Countries Where It’s Not Christmas Dinner Without Fish

Tagged
Food + Drink Holidays Restaurants + Bars
What did you think of this story?
Meh
Good
Awesome