Sites of Native American heritage play a powerful role in educating visitors about the original residents of what are now the United States and help foster respect for the 5.2 million indigenous people in the country today. Socially ethical tourism helps sustain Native American families — some of the least represented, most poverty-stricken groups of people in the US. It’s important for tourists to respect that many of these sites are sacred to the local people, their spirituality, their land, and their ancestors. The following 11 important Native American heritage sites are managed by state or federal agencies in collaboration with associated tribes and are well worth a visit. 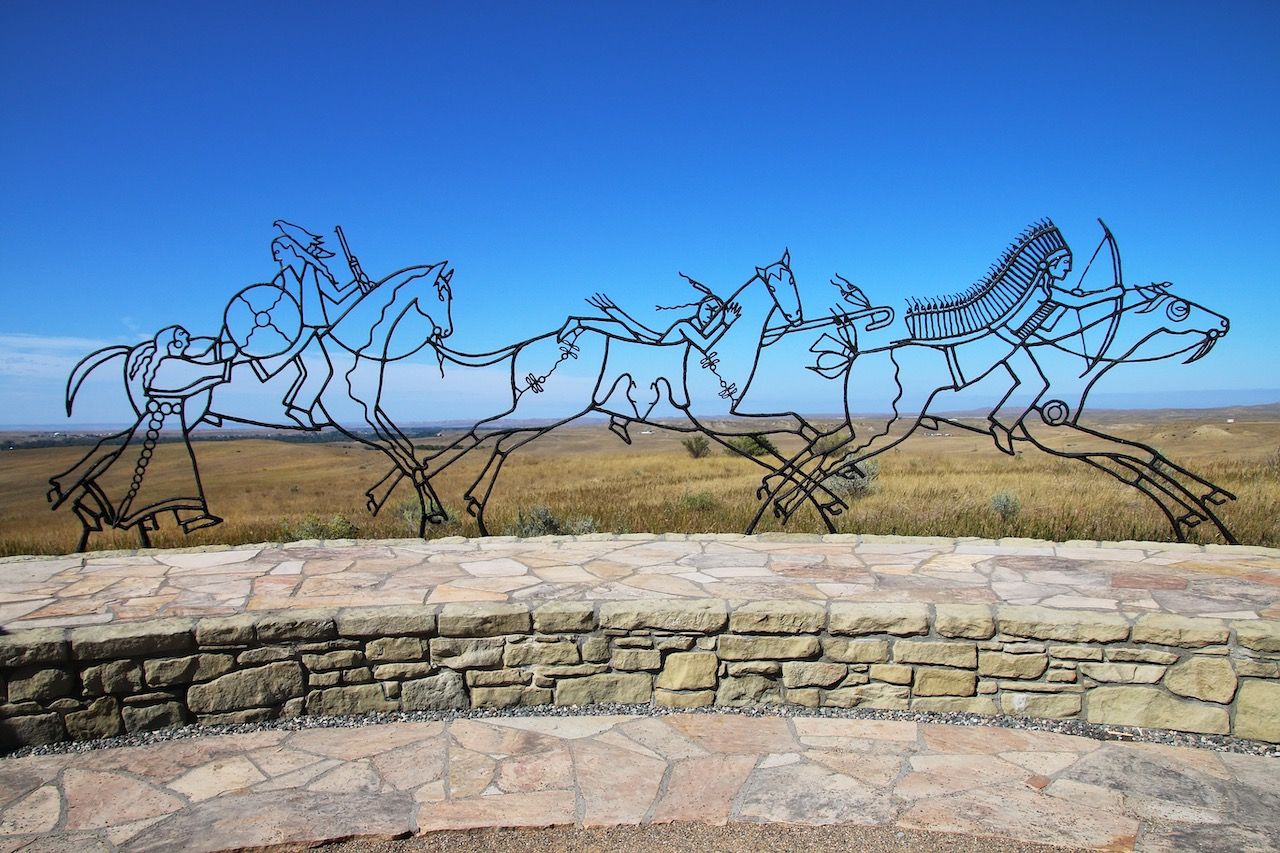 On June 25 and 26, 1876, thousands of Lakota Sioux, Cheyenne, and Arapaho fighters came together to defeat the 7th Regiment of the US Cavalry. Under Lt. Col. Custer, the soldiers attacked the south-central part of Montana, with the goal of forcing the native peoples onto reservations. While Custer and several hundred others of European ancestry died in the battle, ultimately the native peoples’ sacred lands were taken from them and their relocation forced. This is a deeply meaningful site for many contemporary Native American people. Today members of the Crow tribe guide tours of the Little Bighorn Battlefield National Monument, where visitors can see the site of “Custer’s Last Stand” on Last Stand Hill; visit a museum of historic and prehistoric artifacts; reflect at the Indian Memorial; and walk through the National Cemetery. The national monument is on the Crow Agency directly off a major interstate. 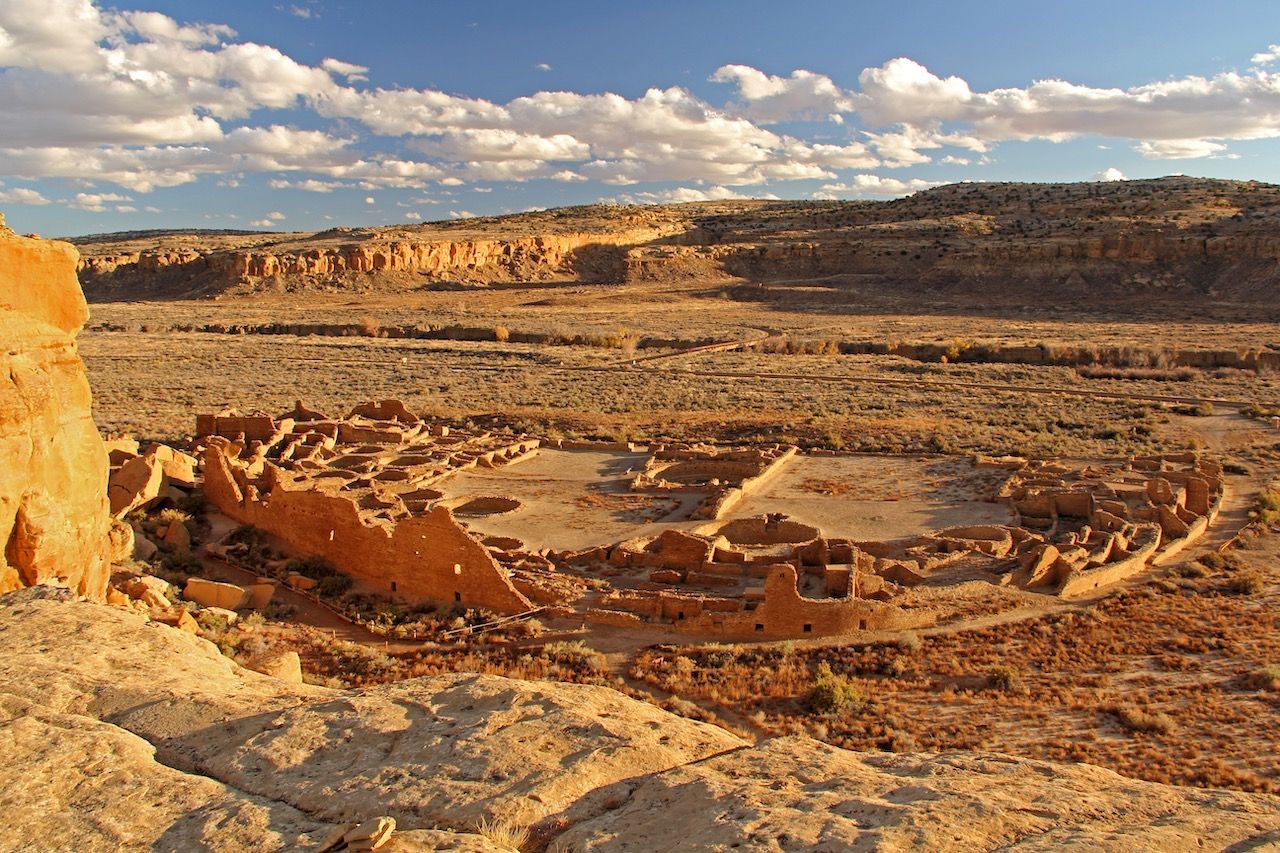 The Chaco Canyon area is important because it served as the epicenter of the Puebloan peoples — the ancestors of the Hopi and others — at least 3,000 years ago. This was where astronomy, art, and trade began to flourish and then spread throughout the Southwest. The National Park System preserves the Chaco Culture National Historical Park, which features unique architecture, extensive rock art, and domestic and ceremonial structures. Archaeologists recently discovered pre-Colombian chocolate at the site, one indication of trade with people in Central America and beyond. There’s hiking, night sky viewing, and educational activities year-round. Though the site is in a somewhat remote part of New Mexico, it is easy to visit by car, bicycle, or through an organized tour. 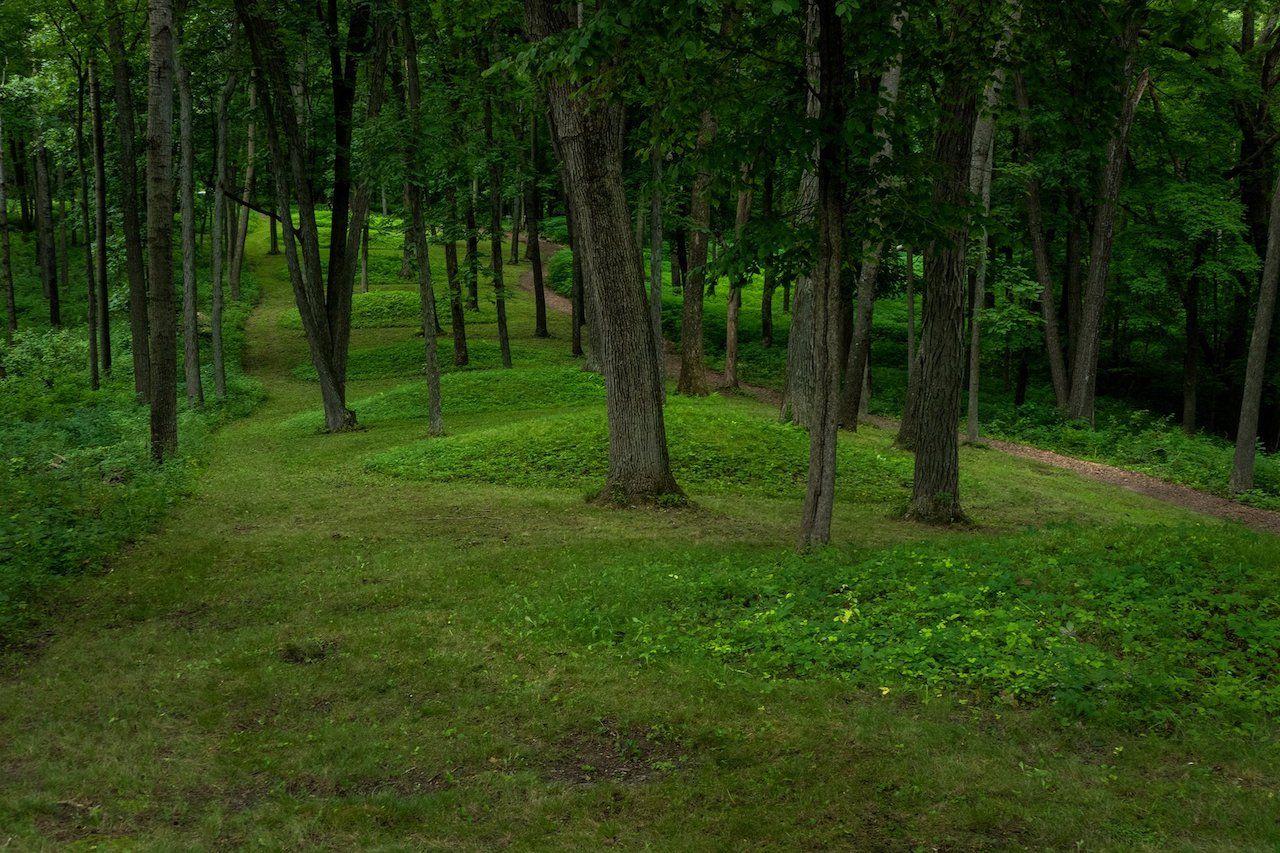 The Midwest of the US is sprinkled with giant earthworks that indigenous people built for purposes we still don’t thoroughly understand. Situated in Iowa, along the Mississippi River, the Effigy Mounds are shaped like lynx, water spirits, bison, turtles, and more. The builders created these structures about 1,400 years ago. In consultation with Native American groups, anthropologists have traced the lineage of more than 20 contemporary tribes who descend from this culture. The Effigy Mounds are open to visitors during daylight hours all year-round, except in extreme weather conditions, on Christmas, and on Thanksgiving. Barring icy road conditions, the Mounds are easy to get to. 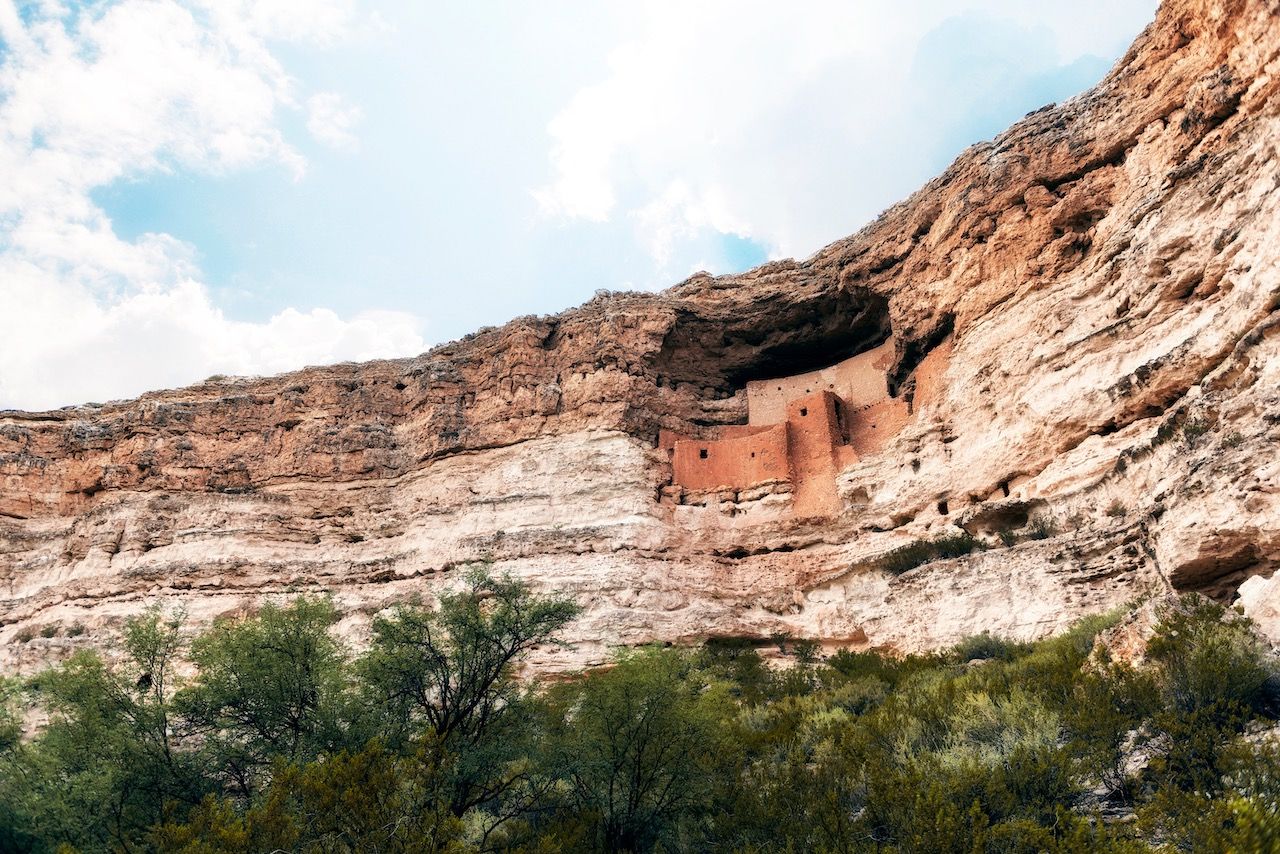 Montezuma Castle and the nearby Montezuma Well were important to the Sinagua people starting more than 800 years ago. The castle is a stunning, incredibly well-preserved, five-story cliff structure with 20 rooms. It took 300 years to build it alongside Beaver Creek, which attracts birds and other animals. Artifacts at the visitor center museum include stone tools, bone needles, and gems that indicate long-distance trade. Some Yavapai and Hopi tribal members trace their lineage back to the Sinagua who built this structure and the nearby well. The descendants of the architects sometimes return to the sites for private religious ceremonies. Visiting the Montezuma Castle National Monument is simple as it’s just off a major highway. An accessible trail takes tourists throughout the site. 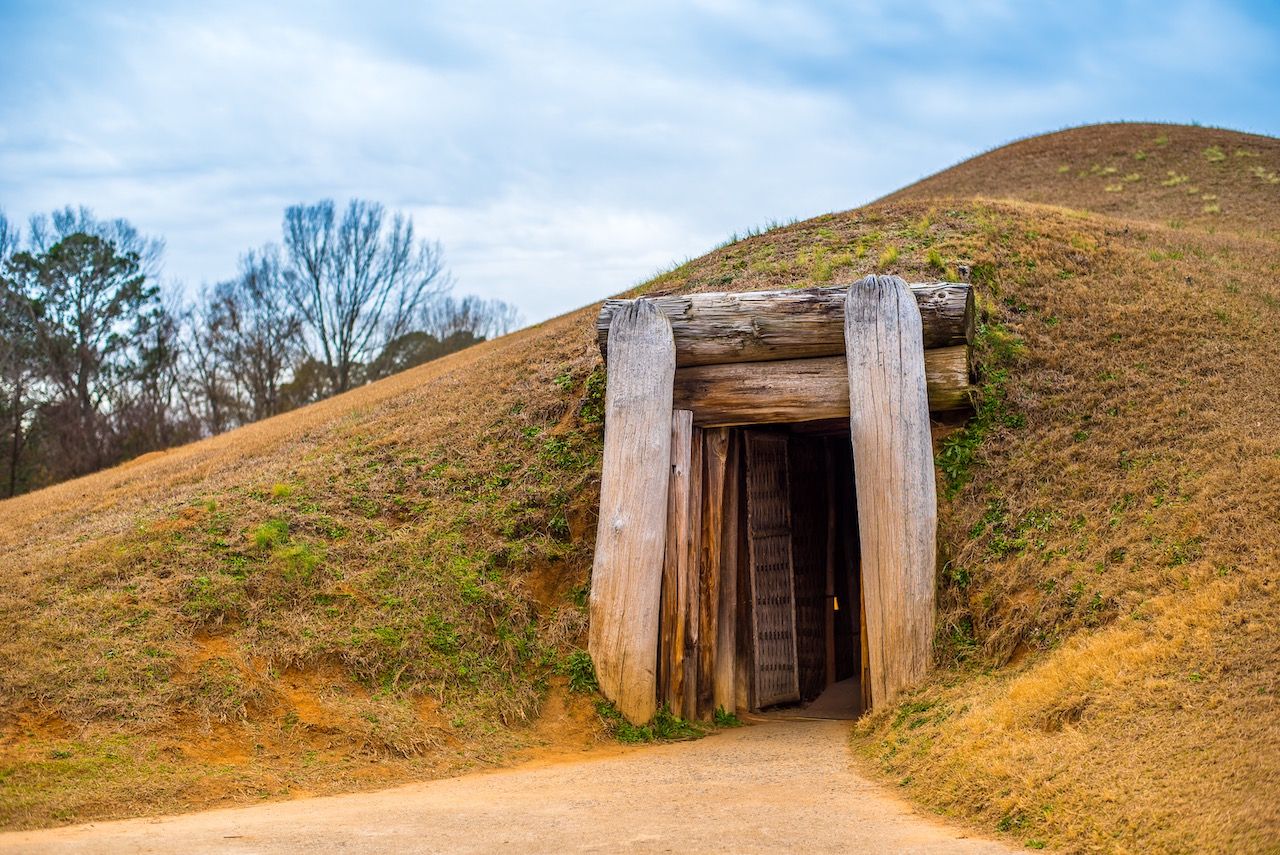 The Ocmulgee sites trace more than 17,000 continual years of Native American heritage. Occupation began thousands of years before the arrival of the Europeans. It was at one time the largest archaeological dig in the United States, with sites ranging from ancient houses to historic villages to very old earthworks. An onsite museum housing more than 2,000 artifacts showcases their finds. Every September, over 300 Native Americans gather at the site for a public celebration of culture, including dancing, storytelling, music, and art. Ocmulgee is the ancestral homeland of the people of the Creek, or Muscogee, Nation. The Ocmulgee National Monument is open to the public and leashed pets. Six miles of trails thread through the site and bikes are only permitted on the main trail. The main entrance is just off a highway near the city of Macon. 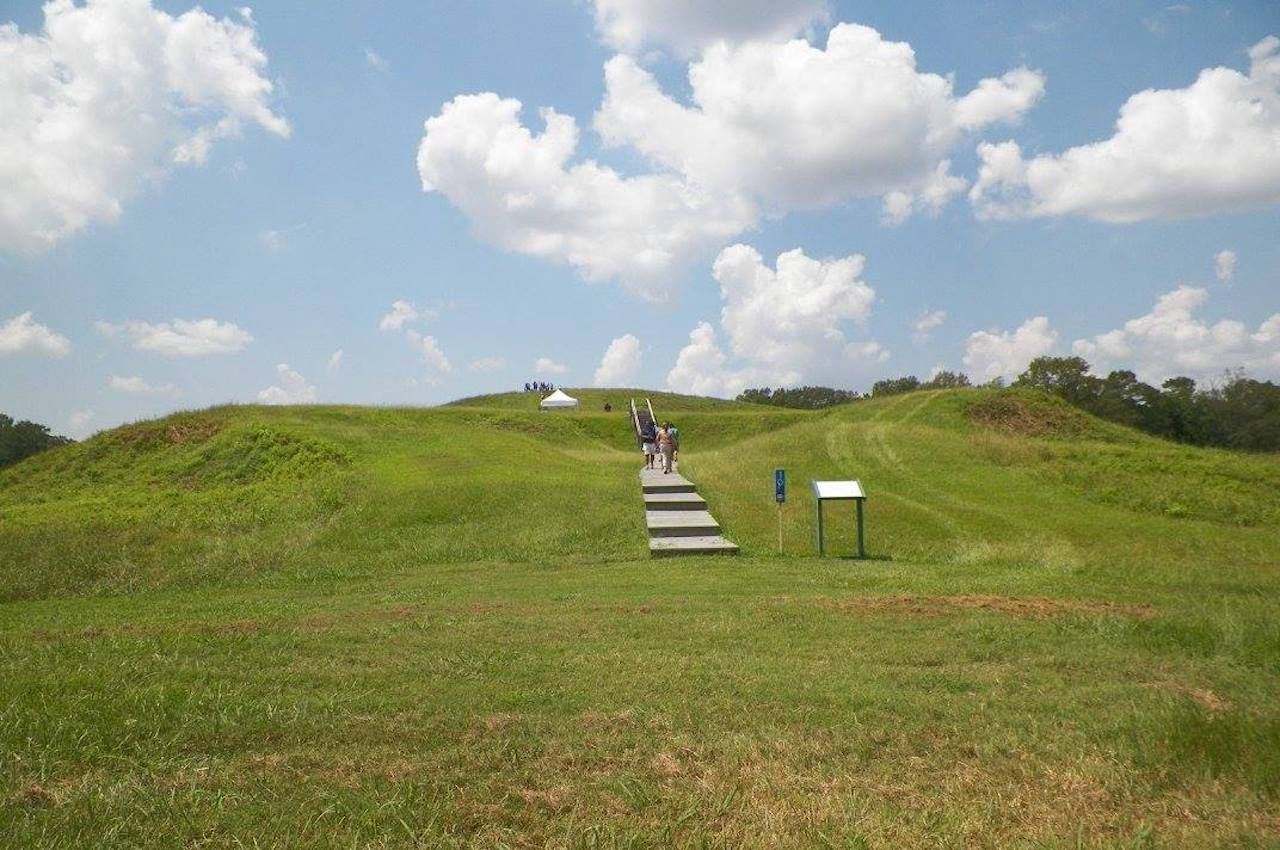 Members of what is now called the Poverty Point Culture built the mysterious earthworks at this northeast Louisiana site almost 3,700 years ago. The site is heavily protected and is a UNESCO World Heritage site. No one is sure what the complicated concentric ridges and conical mounds, which surround a central plaza, were used for. Hypotheses range from trading centers to sites of religious ceremonies. The Poverty Point people were hunters and gatherers and fishers, and although there is no stone to quarry at the site, they crafted interesting objects out of rocks. Archaeologists are unsure what they were used for but the running hypothesis is that the objects improved cooking by holding heat. The Poverty Point State Historic Site is open to visitors nearly every day of the year and is easily reached by car. 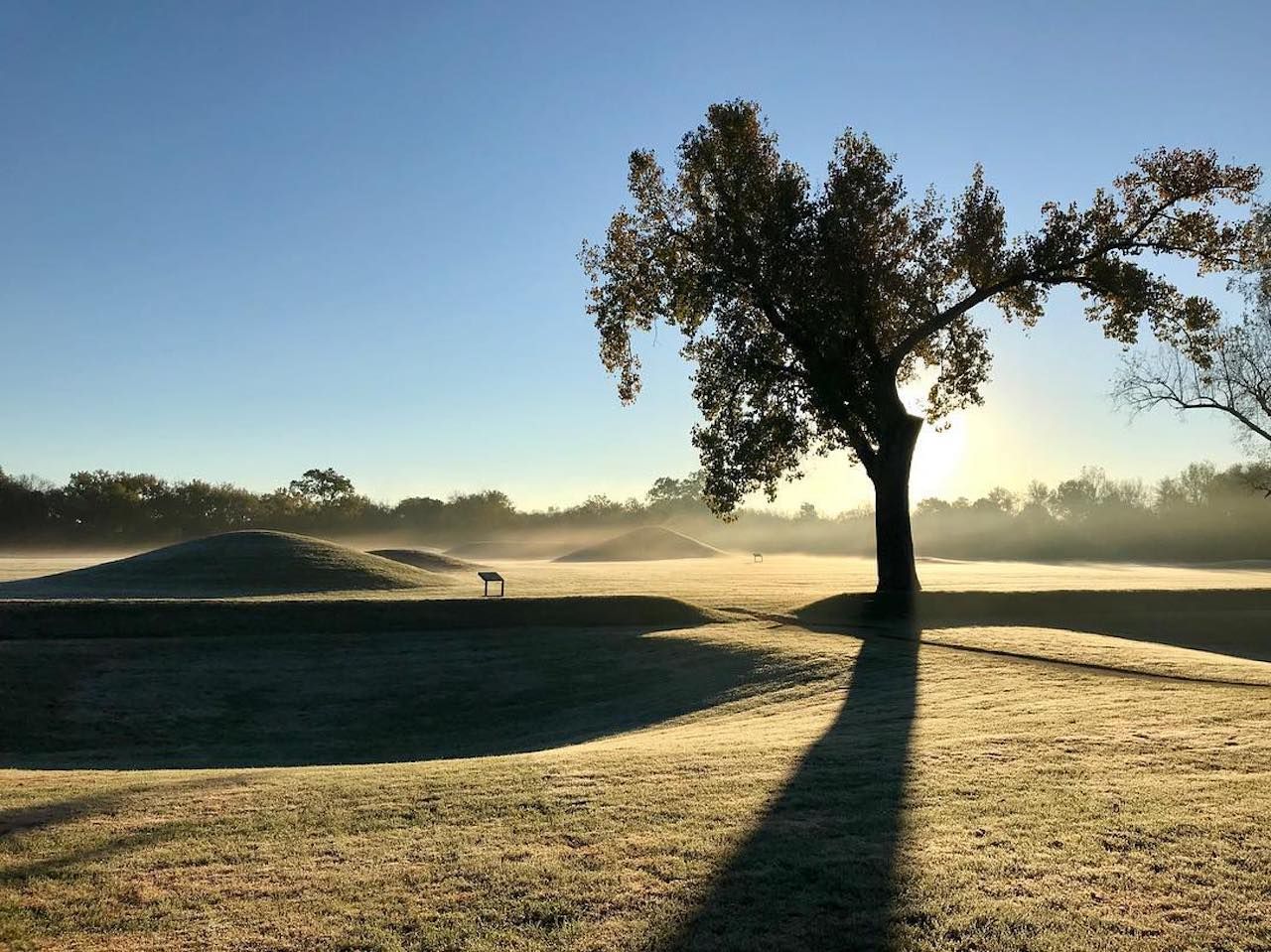 Another mound site, Hopewell is 2,000 years old. It’s located in the Ohio River Valley, and was constructed by the Hopewell culture. Oral history tells us that the Hopewell culture used their mostly geometric mounds as sites of sacred ceremonies, including funerals and other rites. The mounds are 12 feet high and up to thousands of feet across, and the Hopewell culture built them for about 500 years. The Hopewell Culture National Historical Park protects six groups of earthworks, all of which are relatively close together and easy to visit by car. The park has activities including yoga, arts programs, summer lecture series, guided tours, and camping. There is no lodging in the park but there are hotels and inns nearby. 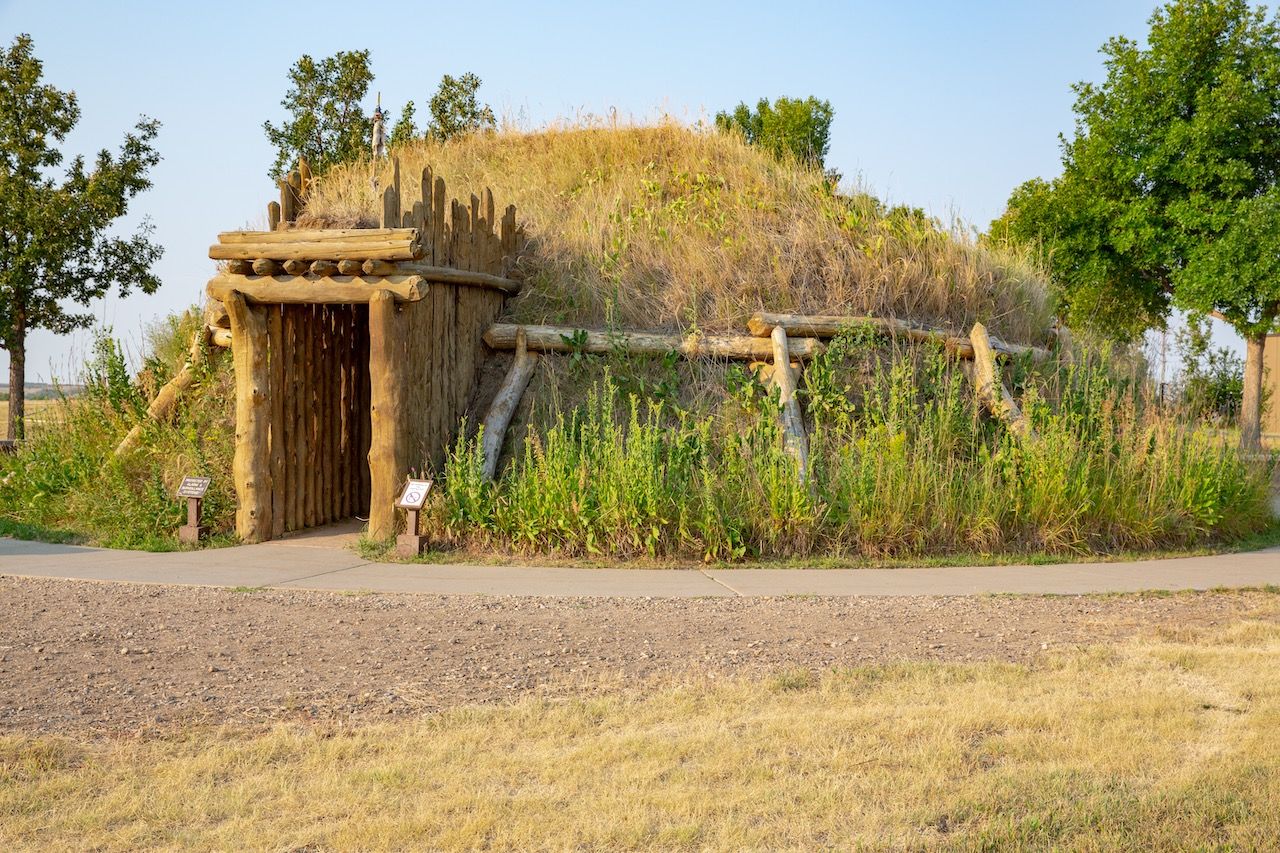 The three groups of the Hidatsa tribe lived in these villages along the Missouri River for hundreds of years prior to the arrival of fur traders in 1750. The site has always been a major trade center, from prehistoric times through the Lewis and Clark expedition. The museum houses art made by indigenous people throughout the history of the villages’ occupation. Their descendants are now located on the Fort Berthold Reservation in west-central North Dakota. Visitors with a few hours to spend at Knife River Indian Villages National Historic Site can walk to Awatixa Xi’e Village (the Lower Hidatsa Site) and Awatixa Village (the Sakakawea Site). Site trails are open all year from sunrise to sunset. 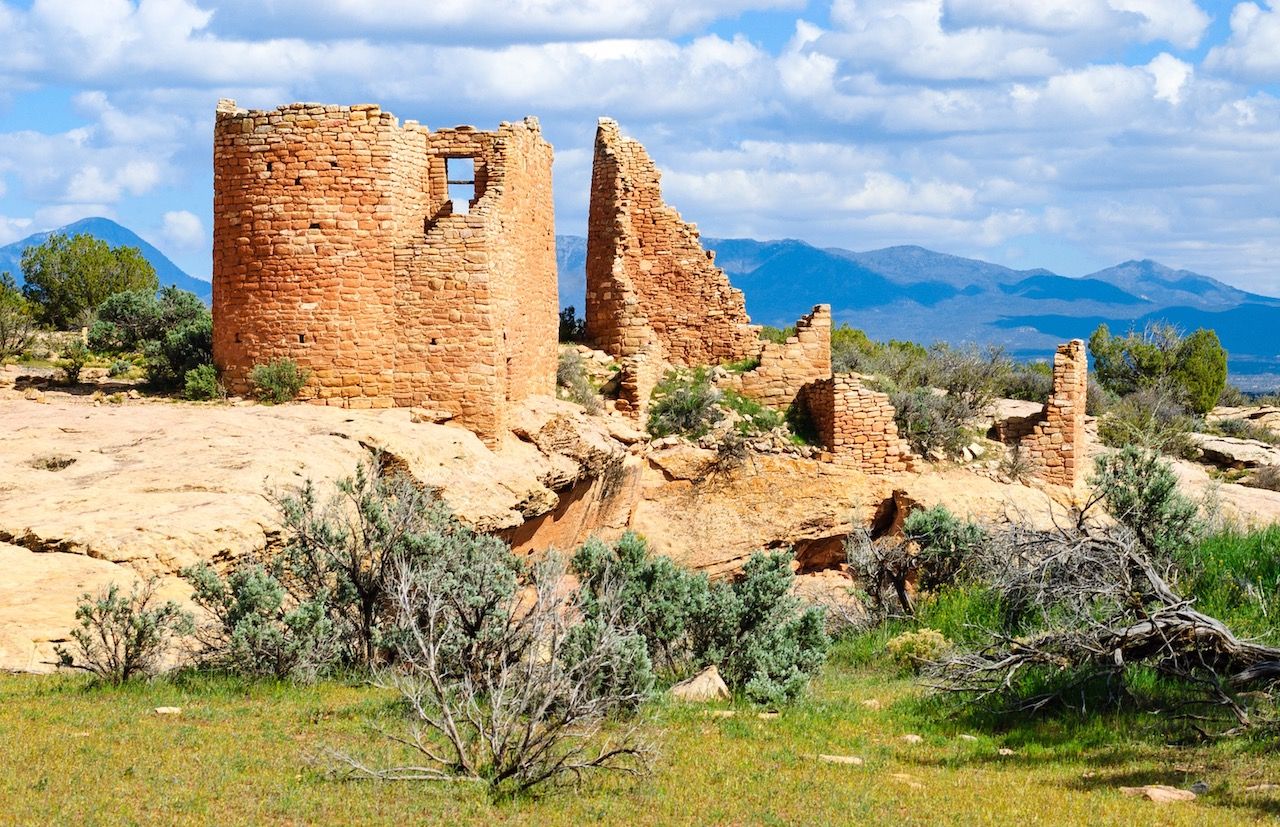 Hovenweep housed humans starting about 10,000 years ago, but it is best known for the six ancestral Pueblo villages scattered throughout the 20-mile expanse preserve. The area was continually occupied through the 1300s, when the Puebloans dispersed from the area. The six villages, with multistory stone structures exhibiting impressive masonry, housed a total of 2,500 people at any given time. In good weather, visitors can check out all six of the villages, which are somewhat isolated from one another. Visitors to Hovenweep National Monument meet at the visitor center at Square Tower Group, and drive to each of the other five villages. Spring is the best time to go, not just because of the wildflowers and birding, but because summers are extremely hot and winter conditions make some roads impassable. Still, this is one of the oldest sites in the Southwest, and seeing the structures make for a memorable adventure. 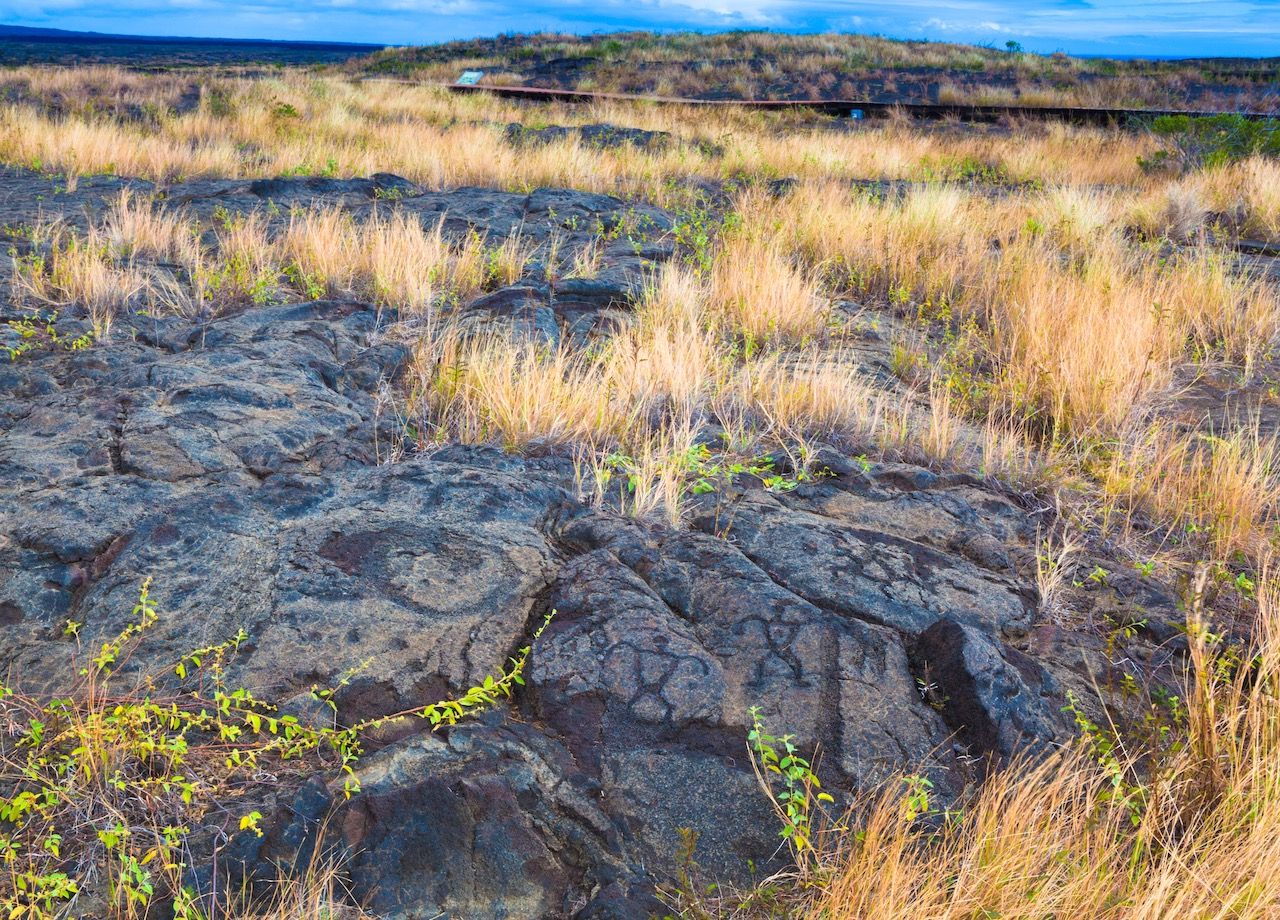 Located in Volcanoes National Park on Hawaii’s Big Island, Pu’u Loa consists of more than 23,000 lava etchings that are sacred to native Hawaiians, especially the Kalapana people. The etchings are in all kinds of shapes, like people, canoes, animals, concentric circles, and pecked dimples known as cupules. They appear to have been sometime created between 1200-1450 AD. Until relatively recently, native Hawaiians used to bury their babies’ umbilical cords in the lava near the petroglyphs, which was believed to ensure the child’s long life. Perhaps Pu’u Loa got its name from this practice, which translates to “The Hill of Long Life.” The National Park System has created a seven-mile walking trail to reach a boardwalk to see this site without damaging it. 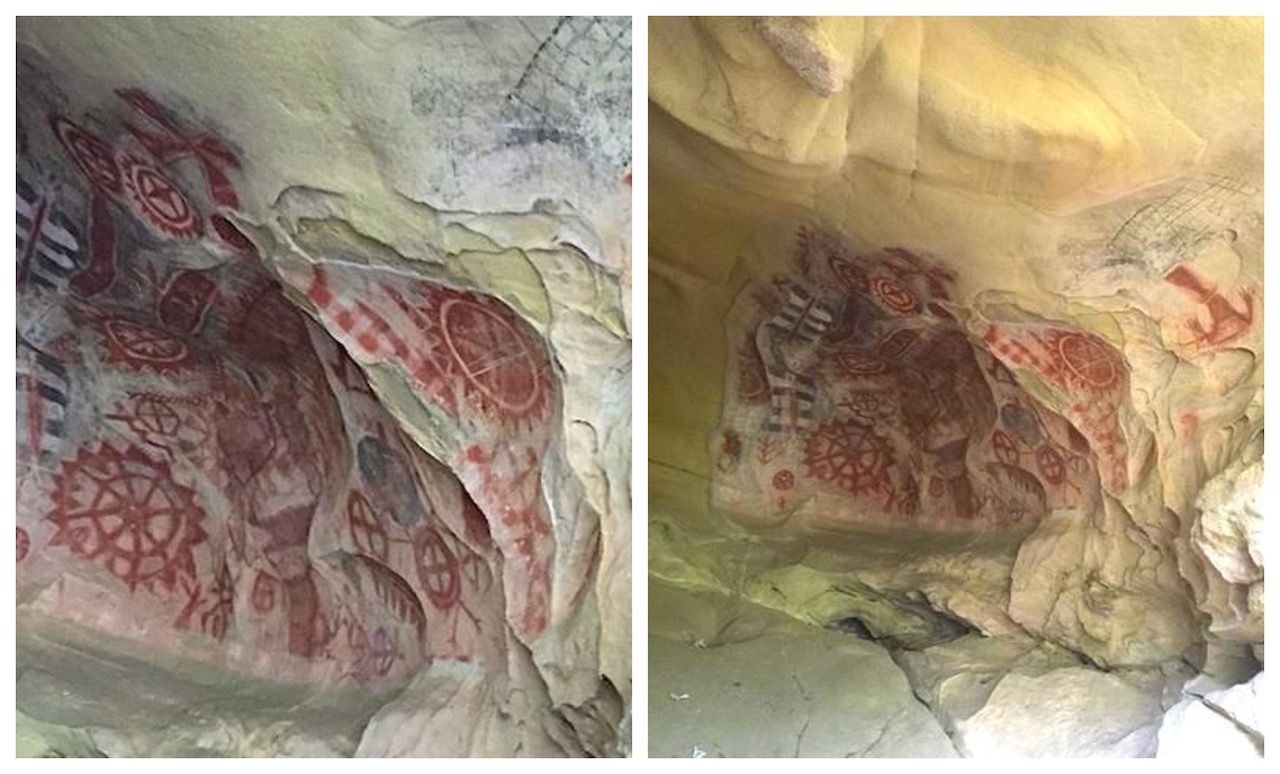 Using ochre, shells, and charcoal, the Chumash people painted amazing cave art on the walls of this sandstone feature sometime in the 1600s. Neither the contemporary Chumash nor scholars know what the mostly red and black painted symbols mean, but Chumash descendants believe their ancestors used the cave to appease supernatural entities. One symbol likely denotes an eclipse that occurred in the late 1600s but otherwise, the designs’ significance is undecipherable. The pictographs are unique: there are no known others like them in the world. They are visible through an iron gate which protects them from vandals. They are important to the living Chumash even though their historical significance is lost. The Chumash Painted Cave State Historic Park is a small park, near Santa Barbara, and tourists often miss the parking area for the trail to the cave. It is open all year.

Culture10 Places in the US Where You Can Experience Native American Culture Responsibly
Tagged
Culture Insider Guides United States
What did you think of this story?
Meh
Good
Awesome