Staying in a castle is the type of experience vacation dreams are made of. Located in Mayo, less than hour from Galway, Ireland’s 800-year-old Ashford Castle Hotel & Country Estate was home to the Guinness family (yes, that Guinness family) for nearly 70 years. Today, sleeping like Irish beer royalty is as easy as making a reservation.

The oldest part of the castle dates back to 1228, but thanks to major renovation work, modern touches like heated floors and bathrooms with televisions coexist with original fireplaces and antique George III-style four-poster beds. Castle life is as swanky as it sounds, and there’s a good case to be made for sleeping in and lingering in any of its 83 rooms. The trouble is, there’s so much to do on the 350-acre estate that it’s hard to justify sitting still.

Get outside and meet the wild locals. 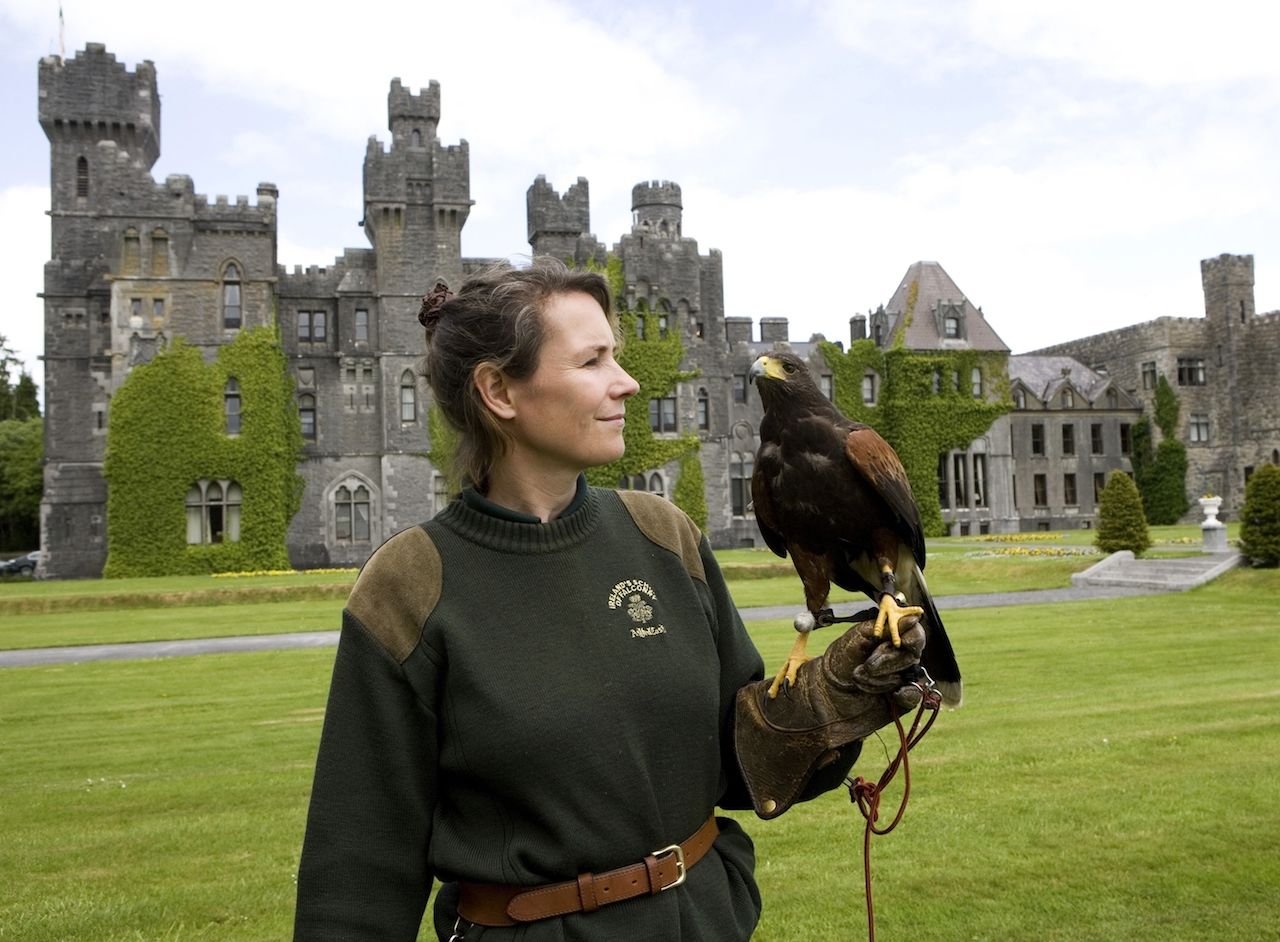 Ireland doesn’t exactly have a reputation for fantastic weather, but that’s what raincoats are for. (The castle has raincoats and boots in all sizes for the unprepared.) And as cushy as the castle may be, some of the best perks can only be found outside castle walls. The grounds are studded with a fun variety of wildlife, including one of the largest equestrian centers in Ireland. Trail rides are a great way to cover a lot of ground in a short period of time, and riders of all ages and abilities can sign up, but it’s the feathered members of the castle’s menagerie that have a way of swooping in with WOW factor.

Ireland’s School of Falconry is on the estate and home to 36 Harris hawks, each with personalities as striking as their looks. One of the birds, Swift, apparently won’t fly if there’s a baby stroller around while Maya only likes to fly certain times of the day. But when one of these birds of prey heads straight toward you and nails the landing on your gloved hand, all idiosyncrasies are forgiven.

It is, in fact, your gloved hand that has the power. When hanging down around your waist, the hawks keep their distance, but lift it up, much like you’re getting ready to take a gulp of coffee, and the birds will be on the move, knowing tasty morsels like mice and chicken could be tucked in between your fingers. Just don’t look as they chow down, and don’t mistake the hawks’ well-trained behavior for affection. They have no desire to be touched or pet, they simply know where to get a good meal. 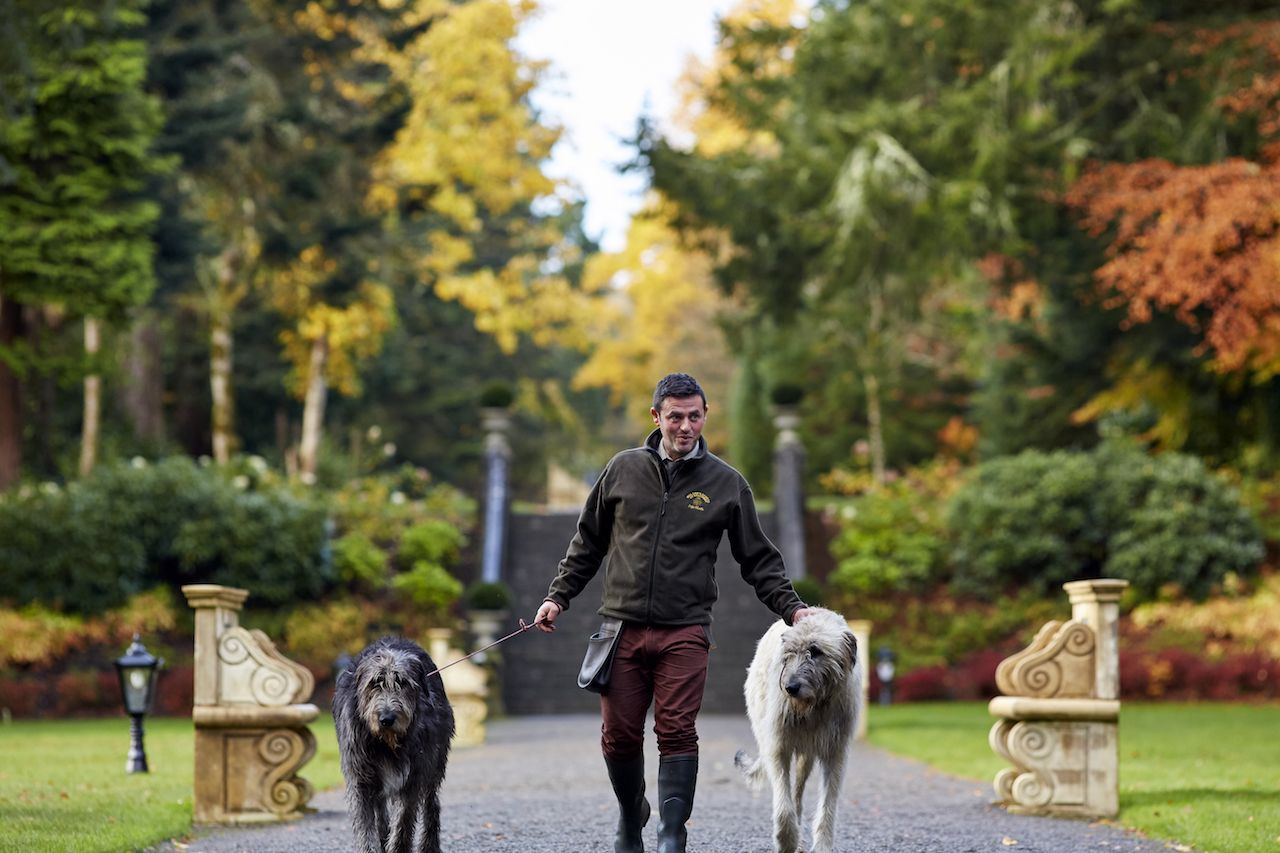 If you’re an early riser, a dog lover, or both, meet up with Cronan and Garvan, the resident Irish Wolfhounds, for their morning constitutional. After taking on the art of falconry, going for a walk with a couple dogs might not seem particularly exciting, but splashing in mud puddles takes on new meaning when the dogs doing it weigh in around 160 pounds. The boys are so big that instead of dog beds they sleep on twin mattresses.

After the morning romp through the woods, you should still have plenty of time to enjoy the breakfast buffet in the George V Dining Room. You could try the pan-fried hake with oatmeal crumble, or, as my server put it, “You can become one of us” by opting for porridge topped with Irish whiskey. Just don’t over serve yourself as later in the day there’s afternoon tea where you’ll have food like Irish lobster sandwiches, scones with lemon curd, and vanilla scented eclairs that are often enjoyed with Champagne. 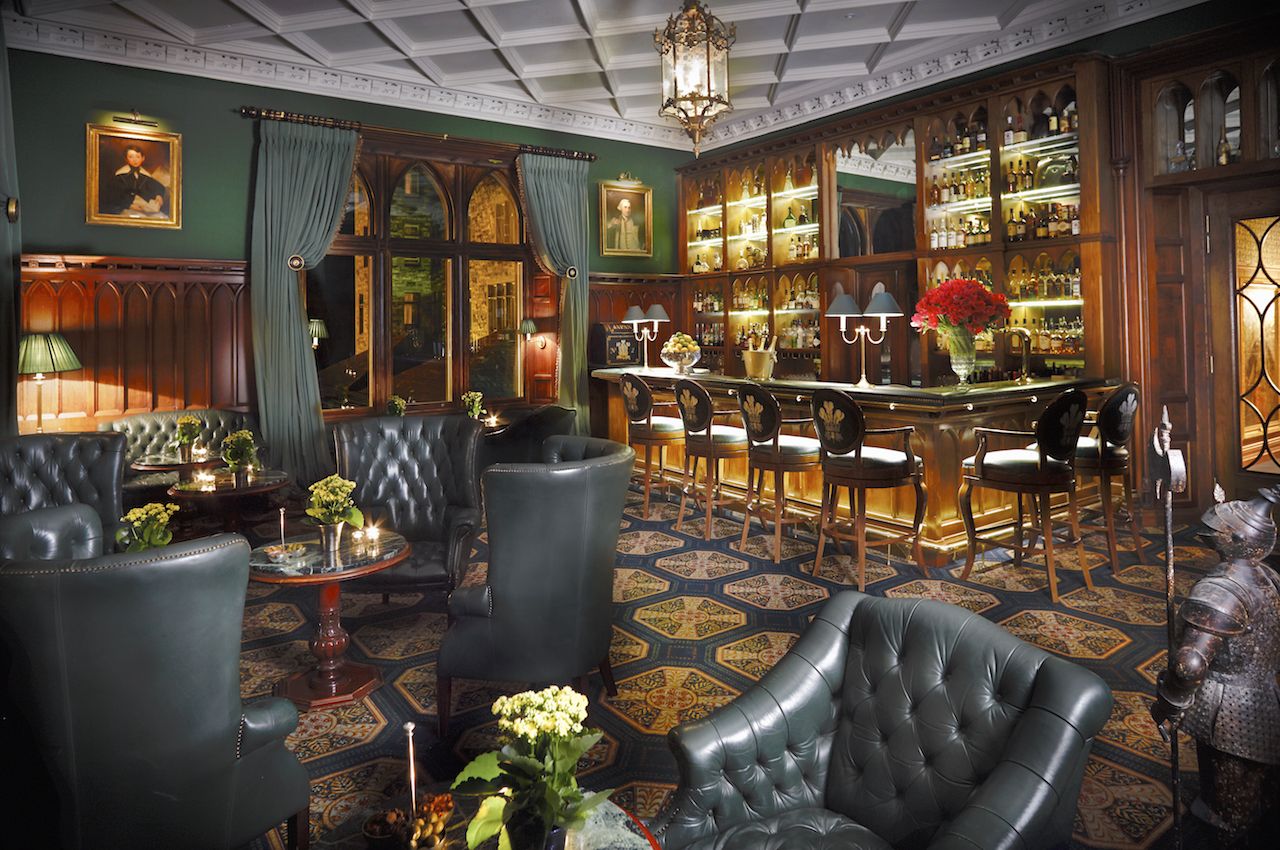 I guess it shouldn’t come as a surprise in a house built by the success of Guinness that alcohol plays a role in many aspects of castle life. With its wood-paneled walls, leather chairs, and richly embroidered bar stools, the Prince of Wales Bar is fit for a king. In fact, in 1905, the bar was visited by the Prince of Wales who went on to become Great Britain’s King George V. You’d be hard pressed to find a time when Guinness didn’t flow here. These days, it’s Irish whiskey that has guests raising a glass with a smile.

And what’s not to be excited about? Irish whiskey is booming, and there are plenty of exciting bottles to try and distilleries to visit. Ashford Castle is getting in on the category with a partnership with Midleton Very Rare Whiskey and Waterford Crystal. The castle now has an exclusive, single cask whiskey affectionately known as cask #70345. There are only 168 bottles in all, so getting your hands on some will cost you (bottles have ranged between $1,000 and $1,800, and a single pour goes for around $175). But castle life is a luxury, and some things are worth the splurge. Plus, when the bottle comes out, anecdotes about royal castle life quickly follow.

Where to Stay11 Insanely Beautiful Castles You Can Actually Stay the Night In
Tagged
Luxury Travel Trip Planning Where to Stay Ireland
What did you think of this story?
Meh
Good
Awesome