Life-changing travel job postings can seem a dime a dozen these days, with short-term opportunities regularly cropping up for such random activities as babysitting sea turtles in the Maldives or working as a housekeeper for the Queen of England. As tempting as the posts may seem, your odds of landing one of these gigs generally fall somewhere between winning the lottery and getting struck by lightning. Even if you do win one, what happens when it’s over? How do tell your boss or partner you’re about to bounce to the other side of the world for a while and convince them to keep your spot warm for you upon return?

Last winter, Libby Vincek had the opportunity to find out. After coming across an online ad, Vincek received the opportunity of a lifetime — she was selected as the official “Local Traveler” in a campaign dreamt up by Thailand’s tourism authority and travel company DreamJobbing. The contest aimed to send one traveler to Thailand to “live like a local” and visit a collection of often-overlooked places in the country, eat street food like a pro, and generally embed themselves into Thai culture for a few weeks. And, perhaps most importantly, the entire experience would be filmed for an Amazon Prime series.

Vincek took off in early 2019, living with locals and attending cultural festivals. The series, The Local Traveler in Thailand, is now live, and the experiences from the trip are now memories. Matador Network spoke with Vincek about the experience to find out how “dreamy” these travel gigs actually are. Here’s a little background on her trip. 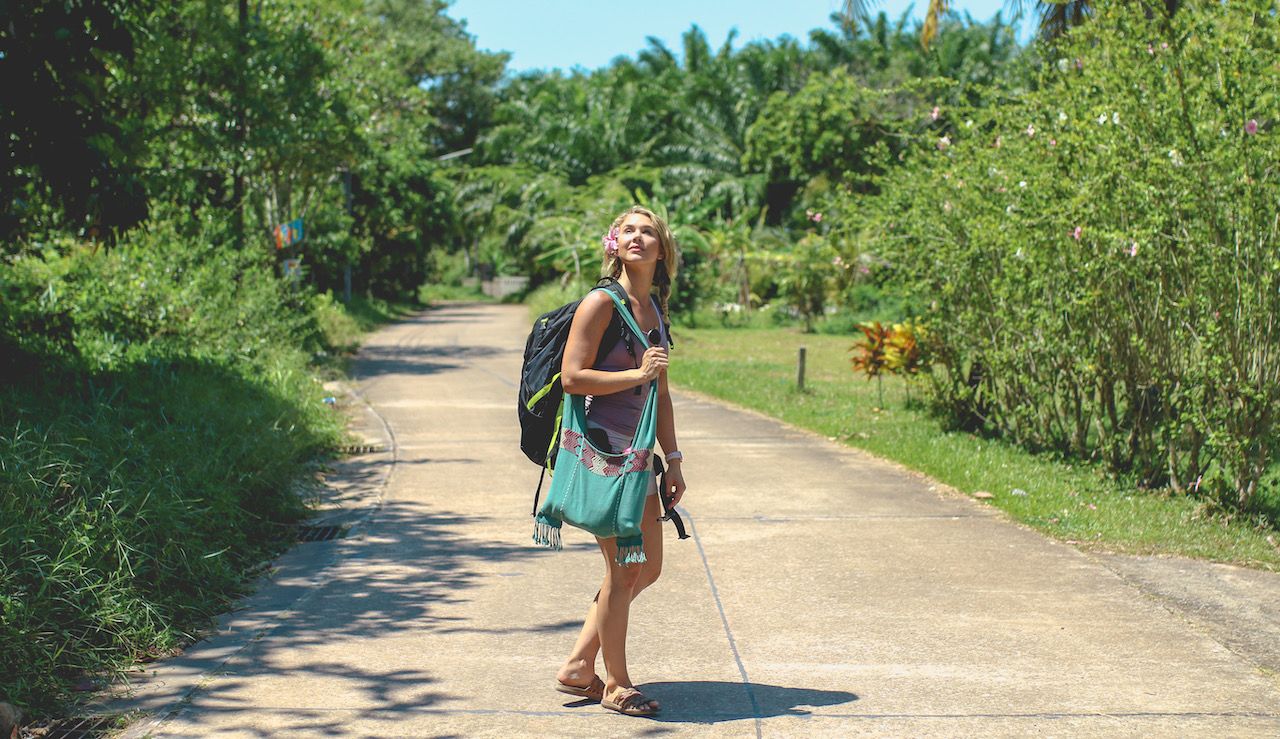 Was everything well-organized, or did you have to do a lot of “trip planning” yourself?

The moment I landed in Bangkok, my experience felt like it was in my hands and in the hands of everyone I encountered. I learned, very quickly, that people were very willing to help you find your way around the city — that’s if they can understand you. I knew that my crew was aware of where we were and where I was ideally supposed to end up, but it was up to me to find my way.

I was more determined than ever to find my way around Thailand towards the locals I was being guided to. The surprises and the challenges of finding my way along with the “spur of the moment” planning made the trip as exhilarating and as incredible as it was. I learned so much about the culture, and what it really means to be immersed in that culture, because of the uncomfortable situations I had to work through to become comfortable.

What was the reaction of the locals in Thailand when you first met them? Were they excited to have you there?

The locals were very friendly and welcoming. They loved having a new face in their community. Rather than feeling like a tourist, they made me feel like a friend coming over for dinner. They were more than excited to meet someone who was unfamiliar with their lifestyle, and found so much joy in immersing me into their culture.

Was there a lot of work expected of you before the trip?

At first, I had no idea the work that was expected of me. I just knew that I was going to Thailand and I was going to roll with the flow when I got there. There was SO much more to that than just rolling with the flow. I took so much pleasure in the responsibilities I had being the local traveler. I wasn’t just experiencing Thailand. I had the honor of sharing a beautiful country with people who may not ever be able to travel there and inspire people to see it for themselves. I was able to tell a story of a new experience as I was learning all about it in the moment, and form relationships with the locals as quick as possible to allow them to feel comfortable enough to open up in front of the camera.

Oh, and I had to figure out where I was going. I couldn’t have enjoyed the hurdles more, though. That is when I found myself truly living my passion. I was filled with what it took for me to overcome obstacles so that I could relay to the people who wanted to travel and embrace this experience after me.

Did you have to quit a job, or leave a partner at home? What was that process like?

I had recently accepted a temporary job with Hallmark in California. During that time, knowing that there was an ending to it, I knew that was coming and I had to deal with it, but they had offered me another opportunity and literally that day was when I found out about Thailand.

They allowed me to work until I left for Thailand, which was great but I had no idea what I was going to do when I got back.

How about after the trip and during the TV production process?

I was a film major in college. My degree is in film, television, and digital media from TCU. I was thriving during this process. Not only was I enjoying my favorite hobby of traveling, but doing it with a film crew and embracing my passion for hosting — it was like I was literally living my dream. This was really where it began to really soak in what I was given the opportunity to do. The more I narrated my experience and relived it, the more I learned about culture and life itself outside of my world. I saw myself grow, I saw myself make mistakes, and I saw myself become a better traveler. It’s almost impossible to embrace the present in crazy situations because we find ourselves thinking about what’s next. This was where I really got to live this experience. 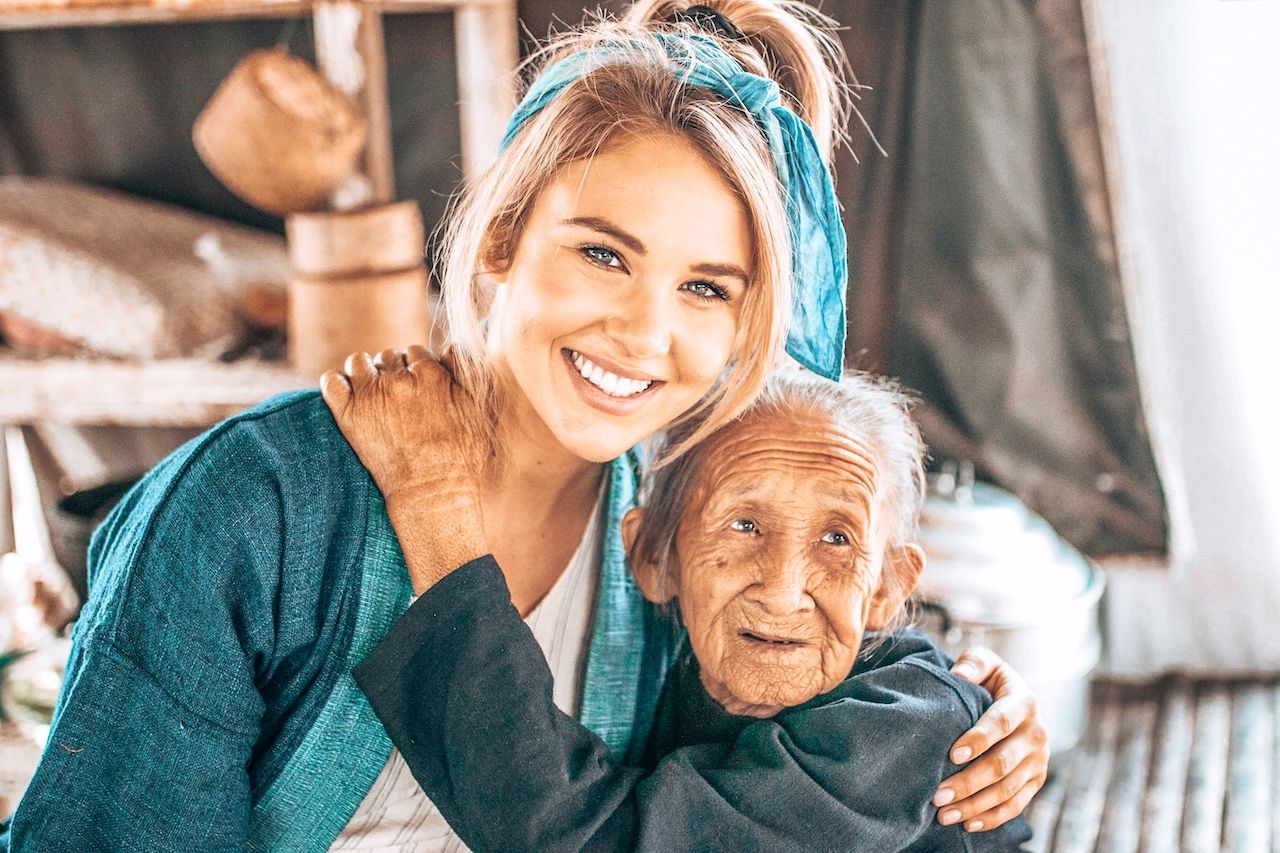 Were there any parts of the experience that were awkward or that made you laugh a bit at how weird the moment was?

Oh my gosh YES! The one that sticks out the most, in particular, is when I was traveling to the Sup Don Pai bridge. I rode this tuk-tuk up to a mountain but it got to be so dark by the time I arrived to my destination that I was lost. There were no lights at this temple. I saw huge unlit statues of Buddha, small temples and buildings, but no people.

I was walking around, nervously looking at my crew to help me, and my director was just like, “Where are we going, Libby?” And I’m just looking at him like “I DON’T KNOW, Z! WHERE AM I GOING?” I saw a young monk run off in the distance and I felt immediately like I was intruding. I was walking around as if I was in a haunted place. I saw these stadium lights in the distance so I started walking toward them — I stepped up a small hill onto a path through these bushes and suddenly came this huge opening and there were 30 plus monks worshipping under a tree.

I begin to hear this chanting over a microphone and humming — I hear whispers yelling “foreigner” in the background from a few of the teen monks to each other. Well, yeah, just imagine you’re in your nightly prayer routine and then out of nowhere you see this blonde female in braids with a giant backpack, holding an orchid, being followed by a camera crew. I ‘d say that’s pretty foreign.

I’m narrating to my director how I’m feeling when all of a sudden they start to worship loudly in prayer and my eyes got as big as my backpack. My heart dropped, and I freak out because I really feel like I’m intruding. The last thing I wanted to do was disrespect anyone in this country, so I immediately (mid-sentence) drop my head, bring my hands together and think, this is SO REAL right now! They’re not performing for anyone — they’re worshipping like they do every night. This is the real historic, traditional Thai culture, this is real Buddhism, and of course, I begin to cry. I didn’t care how that was going to betray on camera. It was real and raw. I knew this was something important, so I moved on to look for where I was really supposed to go and eventually found my way to the temple to meet my local.

Since then, has this opportunity led to other opportunities, or to you making any major decisions about your life? What’s coming up next?

Oh gosh, this really has opened up some doors for me, and not only that, but has given me confidence and a stronger passion for something that I had previously just thought I enjoyed. It has shown me what I want to do in life and has led to me meeting some really, really incredible people. I hope that more Local Traveler documentaries are in my future. I want to travel the world and tell the stories of people’s cultures that deserve to be told. I want to bring a world that is out there to people who would never be able to see it for themselves. Being from such a small town, I have realized that so many people have such closed minds as to what is out there. Just with this documentary, I’ve seen how my small town friends and family have been impacted, seeing a culture that is so different than theirs, and having the opportunity to show that to them and impact them — that makes this brand, this experience, so special.

I’ve since moved to Nashville to be a lead trainer for an upcoming F45 studio here, and for now, I’m helping impact people’s health and wellness. While doing this, I will continue to work toward building the Local Traveler brand and one day hope that these two worlds can collide. I will always have the heart to travel and meet new people, so wherever I am and whatever my job is, that is something I will always do.

So what did you end up doing when you got back?

At first, I was happy to be home because in Thailand, it was like I was living other people’s lives, and I was ready to live my own. But then I realized I didn’t know what to do. It was a total culture shock. I had just recently moved to California, so I was getting back to a life where I wasn’t comfortable yet and was adjusting already.

I was able to take March as it was. I had some small jobs set up, but this experience motivated me to find what I wanted my life to be like, and by living with other people in Thailand it motivated me to really find myself and figure out what I wanted to do. This trip really taught me to allow reality to shape who I want to be, and I think it’s incredible that travel can motivate you to live a bigger, and maybe even better, life.

NewsDelta Is Hiring 1,000 Flight Attendants by January 1, 2020
Tagged
Solo Travel Travel Jobs
What did you think of this story?
Meh
Good
Awesome