Language diversity is dying. While there are over 5,000 languages in the world, experts estimate that many, if not most, are on their way out. Statista, a data provider, compiled the results of the ongoing work of the Endangered Languages Project to create a map of endangered languages highlighting what regions of the world are most affected. 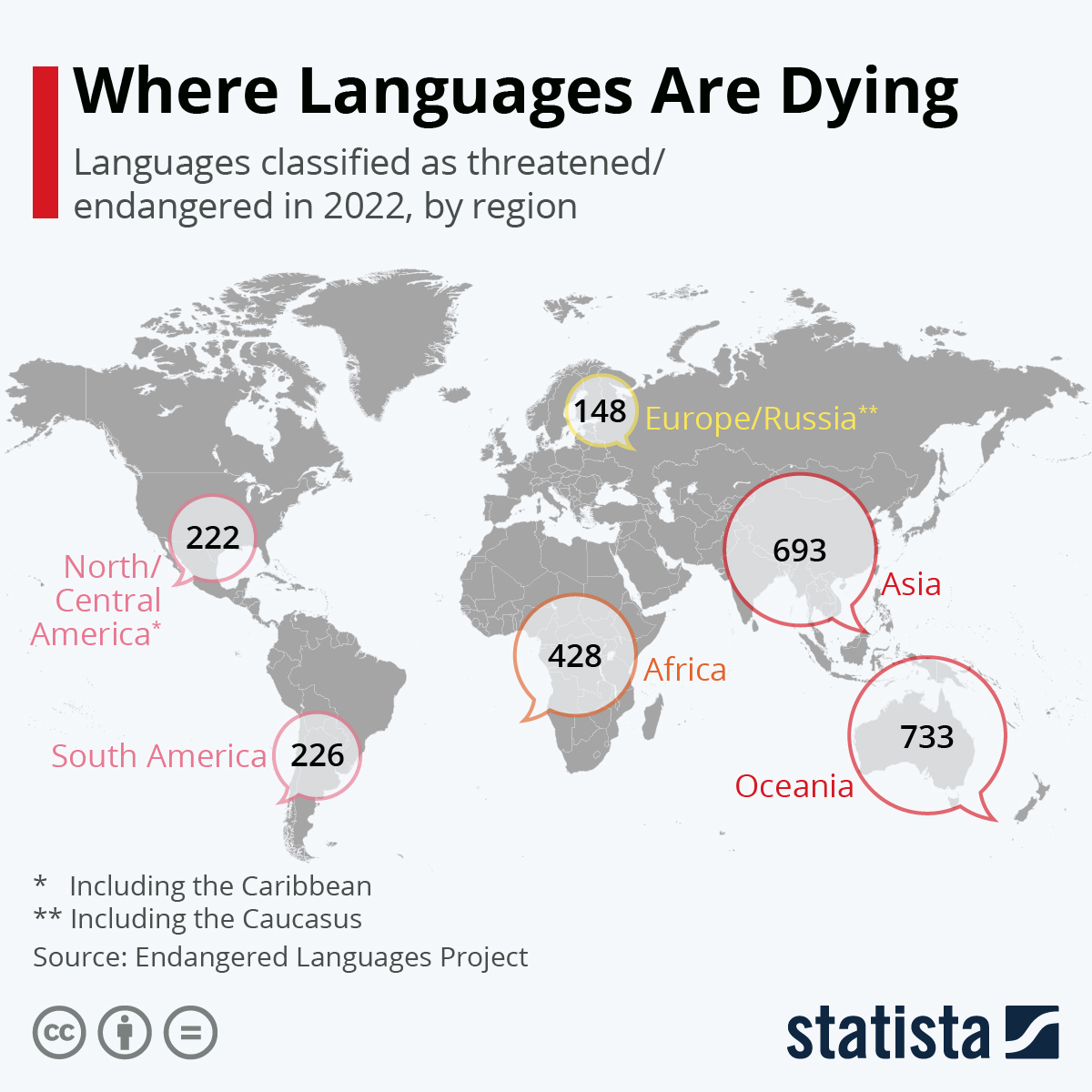 The Endangered Language Project is an online platform administered by the University of Hawai’i Manoa that collects information on the world’s languages, such as where each is spoken, the number of speakers left, what initiatives have been taken to preserve it, etc. For example, by perusing the Endangered Language Project’s website you can see that Irish Gaelic is an endangered language mostly spoken in Ireland and that consists of four different dialects; Irish Gaelic is spoken by 20,000 to 40,000 people worldwide.

Number of threatened or endangered languages by continent

Experts, such as the people at the Linguistic Society of America, acknowledge that the rapid extinction of languages throughout the world is a fact that cannot be denied, but they also explain that it is very difficult to obtain exact numbers when it comes to languages and their extinction. This is because language information is outdated or limited, and it can be different in some cases to distinguish between languages and dialects. The Linguistic Society of America notes that some estimates state that 80 percent of the world’s languages could be gone by the next century as languages like English, Spanish, Portuguese, Mandarin, Chinese, Russian, Indonesian, Arabic, Swahili, and Hindi become even more of a majority.

On its website, the Endangered Language Project also features an interactive map of endangered languages that’s color-coded according to each language’s level of threat: At Risk (green), Endangered (orange), Severely Endangered (red), Dormant (black), Awakening (dark gray), and Vitality Unknown (light gray). Each language is represented by a colored dot on the map, and clicking the dot will reveal the name of the language and its status. Clicking on the name of the language will lead you to a more detailed information card about the specific language.

If the possible extinction of so many languages has you determined to save them, check out Matador‘s list of endangered languages you can learn online and do your bit.

Languages9 Easy Languages for English Speakers
Tagged
Maps + Infographics Languages
What did you think of this story?
Meh
Good
Awesome