Choosing where to rest your head when driving America was once a straightforward choice: follow the glaring neon “vacancy” sign. But over the last decade many roadside motels have undergone transformations that make planning where to stay on route even more exciting. These motels, located from Massachusetts to Louisiana, are at the forefront of this revival. Proprietors have taken classic structures and redesigned their businesses to offer a high level of service and modern amenities, all while retaining retro kitsch details in style and an authentic experience. This new generation of motels offer more than just a place to rest your head — here are some of the best in the US. 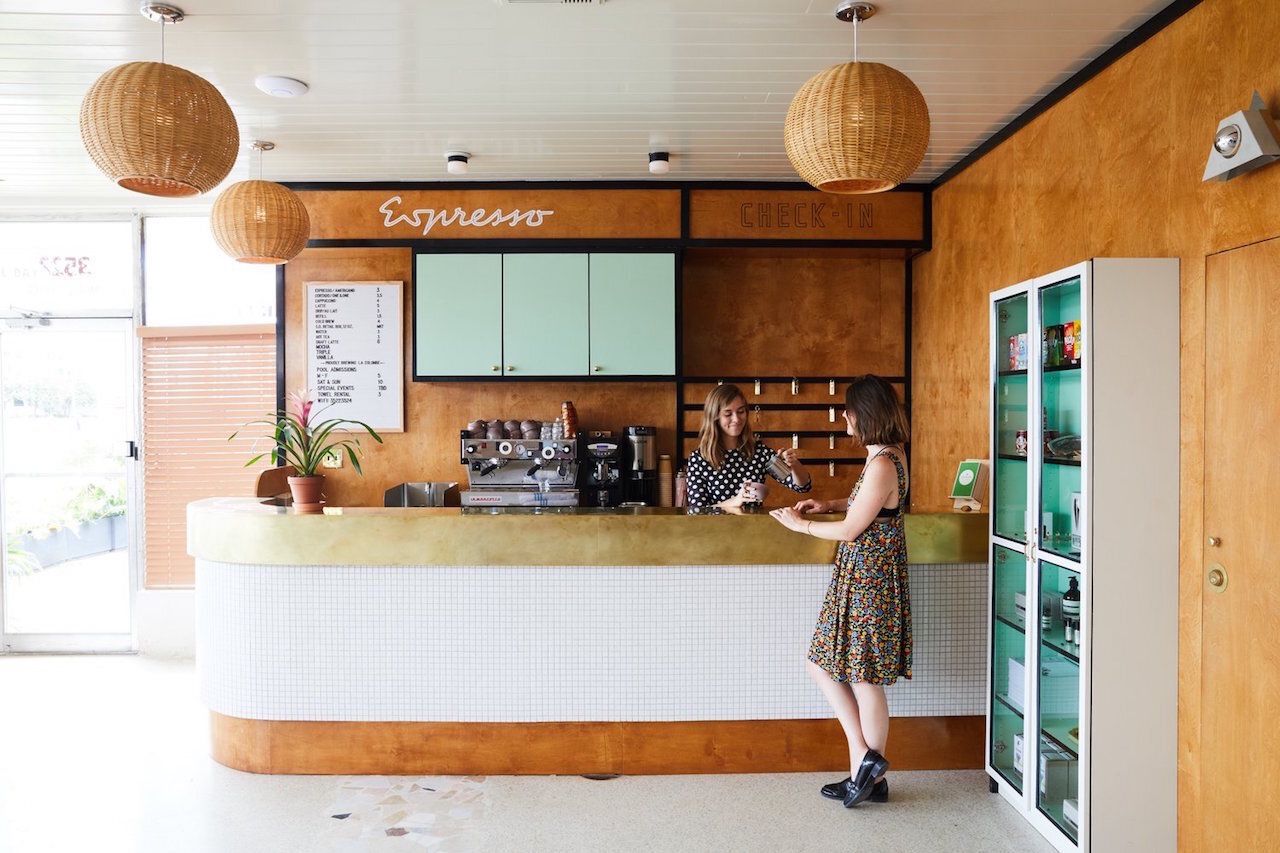 “To be a Drifter you must leave the old propaganda behind you,” reads the homepage of this motel, which invites travelers to book a room and locals to sign up for a swim club membership, allowing year-round access to the pool, bar, and courtyard.

This New Orleans accommodation screams hipster tryhard in its language, social media, and general aesthetic, but it’s not off-putting by any means. The original motel was built in 1956, and its retro neon “motel” sign and low-rise structure have been retained. What you find today is a redesign from 2017 that bursts with color celebrating local creatives, a cafe serving specialty coffee from La Colombe, and a bar with a busy rotating events schedule.

The interior has a feel of California with pastel palm tree murals and a classic ‘70s wraparound bar in the lobby. The pool area steals attention with its chilled bohemian style. The 20 rooms are arranged around the water in a typical motel setup. At a glance, the rooms resemble exactly what you picture of a classic movie motel, but the interior is more akin to a 1950s-style chic cabana. The Drifter looks and sells itself as too “cool” to be referred to as charming, but there’s still something comforting about this motel’s size and sense of community. 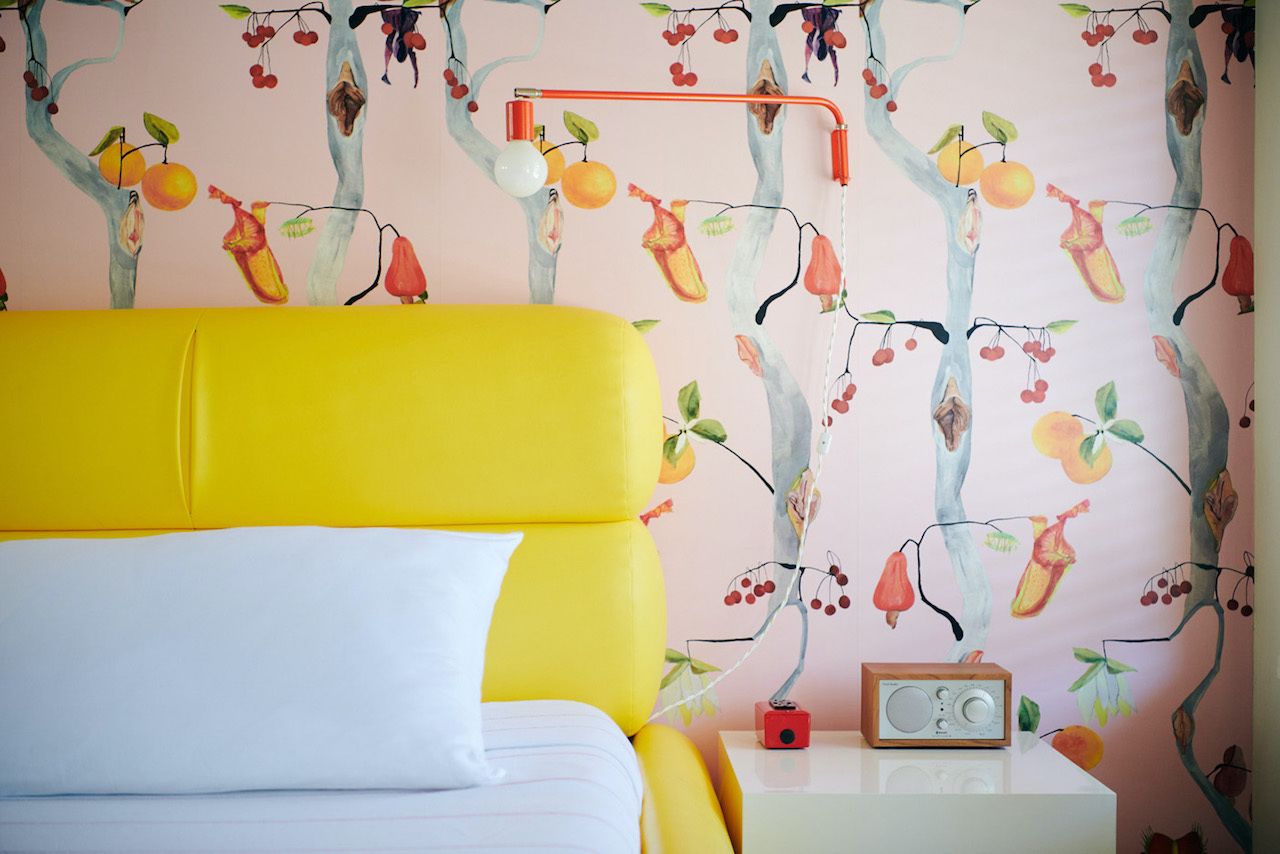 The iconic boutique hotelier Liz Lambert — the brains behind the Austin-based Bunkhouse Group — transformed the 1970s Austin Motel in 2017 into what it is today. The classic, key-shaped, somewhat phallic red neon sign hangs out front and the structure of the 41 rooms, and suites have stayed intact. The interior has had a complete redesign with notes like old-school push-button phones, Tivoli alarm clocks, brightly colored red and yellow leather beds, and custom made Voutsa wallpaper.

The restaurant — Joann’s Fine Foods — is stylized after a California diner, and its menu lists house-made Mexican dishes such as tamales with green chorizo and abode pulled pork and picadillo enchiladas with ranchero sauce and green cabbage slaw. The kidney-shaped pool is packed on a hot day and is open to the paying public. They also run events such as their “Full Moon Swim,” which is ticketed and has a DJ from 8 PM. 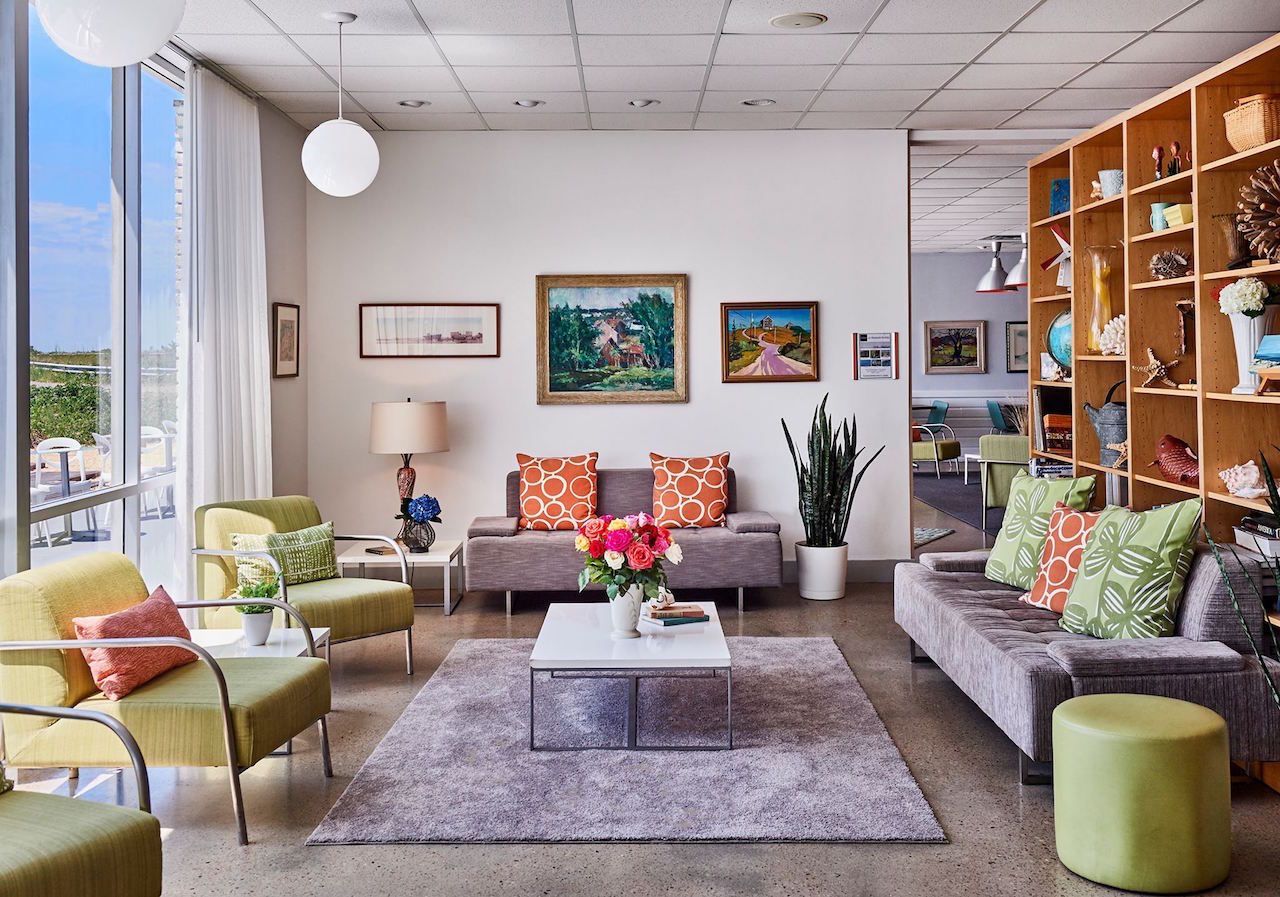 The Harbor Hotel advertises itself as “retro-glam in all the right places,” and the relaxed and colorful accommodation lives up to the slogan. Looking out over Cape Cod, just off Route 6, the motel is steps away from the beach and a perfect place to stop during a coastal road trip, or if you are visiting Provincetown for an event or short vacation. The decor is bright without being obtrusively garish, with furnishings and art in aqua, greens, and orange tones. In true motel fashion, there is a statement pool, which is heated, and a Cabana bar that’s open during the high season. The owners stress that all are welcome to stay in one of their 119 rooms and 10 suites, even your pets, which is ideal for the location. 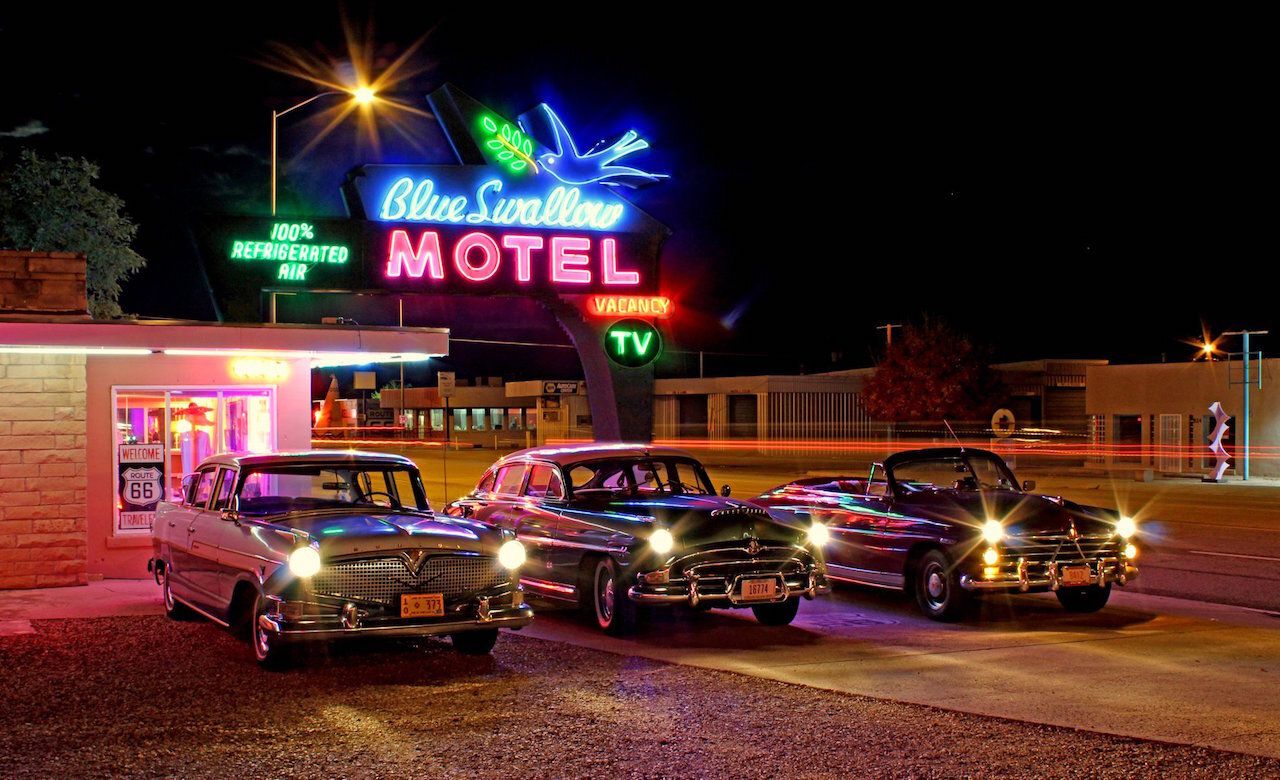 Blue Swallow Motel is a family-run motel on Route 66 that has been open since 1939. The current proprietors get rave reviews for their level of service, and the neon glow, spotless rooms, and attached garages come together to make the motel somewhat of an iconic landmark on the Mother Road. It sets itself apart from local chain hotels with rooms that are packed with character, and guests speak of the sense of community spirit between patrons, many of whom are following Route 6. 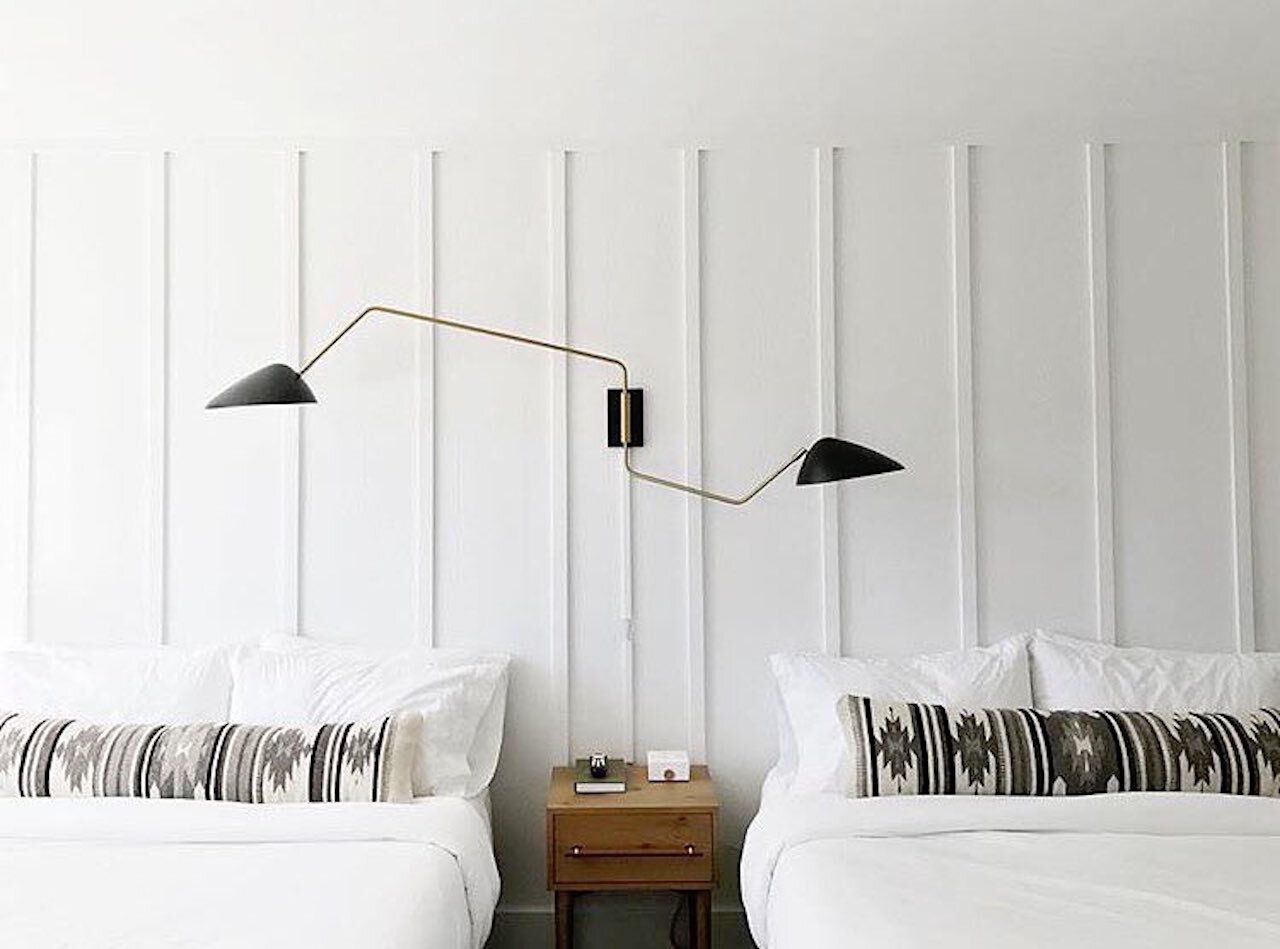 The Amigo Motor Lodge is another conversion from a classic motel. After a lot of blood, sweat, and tears, Texas couple Philip and Kaitlyn opened the beautifully modernized and chic accommodation in Downtown Salida in 2016.

The couple shared, “You get an odd look when you tell people you are leaving town to go run an old motel in the mountains. It usually takes the form of a half-cocked head, a raised eyebrow, or a pause (sometimes all at once) while it sinks in. And rightfully so, I guess. When is the last time you envied the night manager at a dusty motel, checking in road zombies alongside an interstate highway?”

But this place is no “dusty motel.” The rooms are simplistic with block coloring and are dressed in details such as gilded gold lamps and geometric printed furnishings. They also have five retro airstreams that are located on the property which you can rent out. It is their respect for the old characteristics of the motel and the love that the owners have clearly put into this project that makes this place particularly special. Their homepage lists a huge range of outdoor activities and wellness experiences you can enjoy in Salida, and the motel is sure to be super helpful if you are in need of anything during your stay. 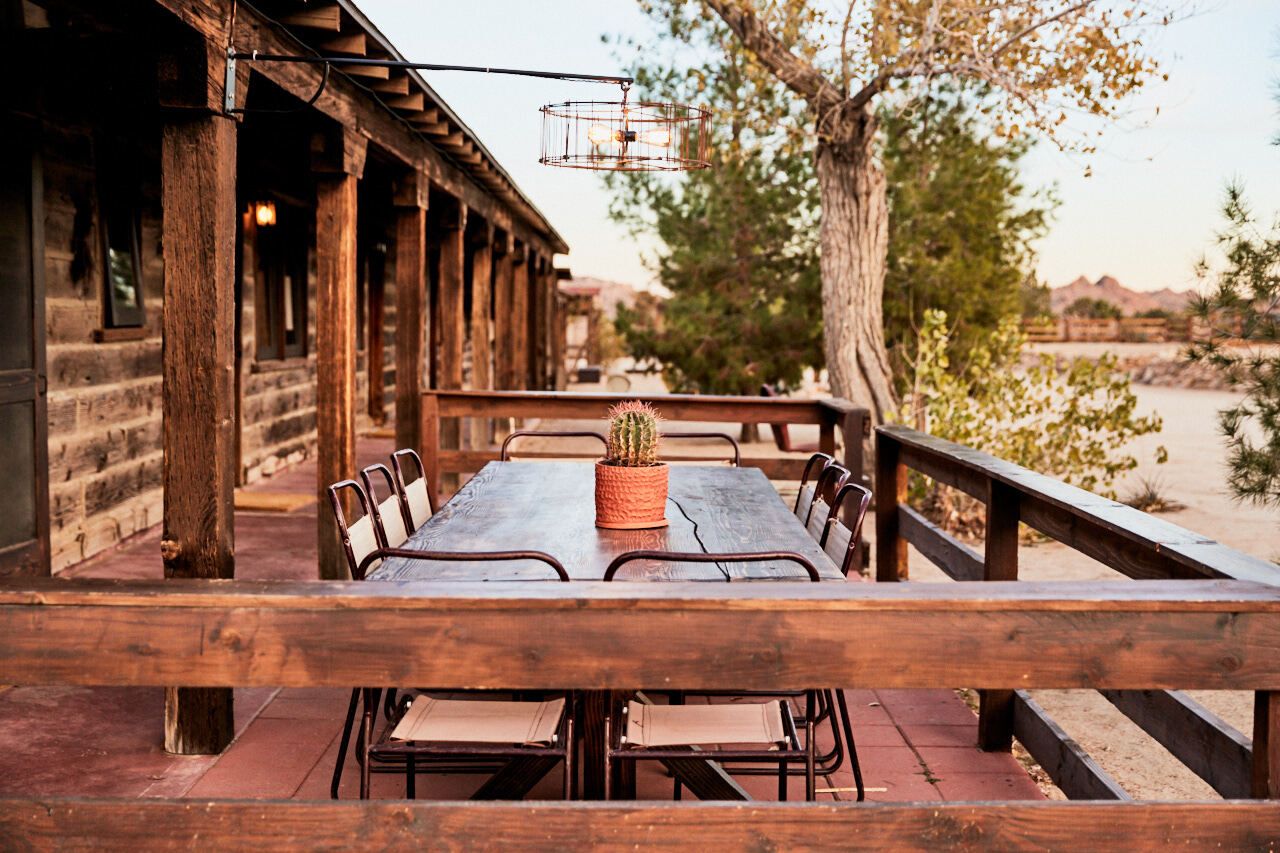 Built in 1946 by Roy Rogers as a base for Westerns film stars, Pioneertown Motel has also recently been modernized. Local furniture maker Dan Anderson draws his inspiration from the surrounding desert and his beautiful craftsmanship coupled with adorable Western elements such as handwoven blankets and cowhide rugs make the accommodation a unique find. A slice of SoCal history, the Pioneertown Motel is a perfect place to stay if you are driving through the state, hiking around Pioneertown Mountain Reserve, or if you’ve had one too many at Pappy & Harriet’s — a classic neighborhood BBQ and rock and roll joint. 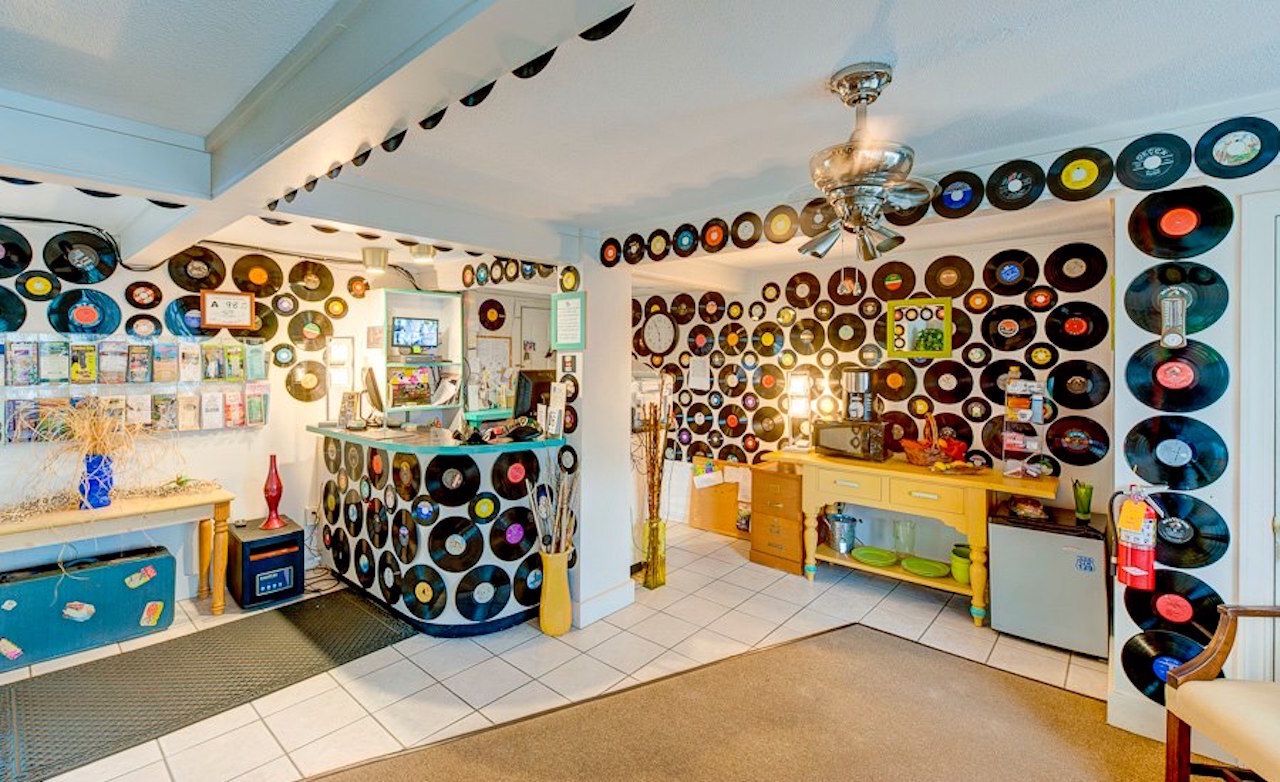 The Sunset Motel in Brevard hasn’t been majorly upgraded like many on this list, but it vies for a place at the table due to its authenticity. The owner’s boast, “We’re the real deal: clean, comfortable rooms, friendly hometown staff, chairs outside your door so you can visit with neighbors.” The rooms are basic, and the motel’s non-pretentious ‘70s decor is not going to win any awards — it’s a tad kitsch, bright, and slightly dated — but that’s perhaps what makes this roadside motel feel genuine. If you have a group or family, The Sunset has a cottage that sleeps six and a large range of other rooms that sleep between two and four. 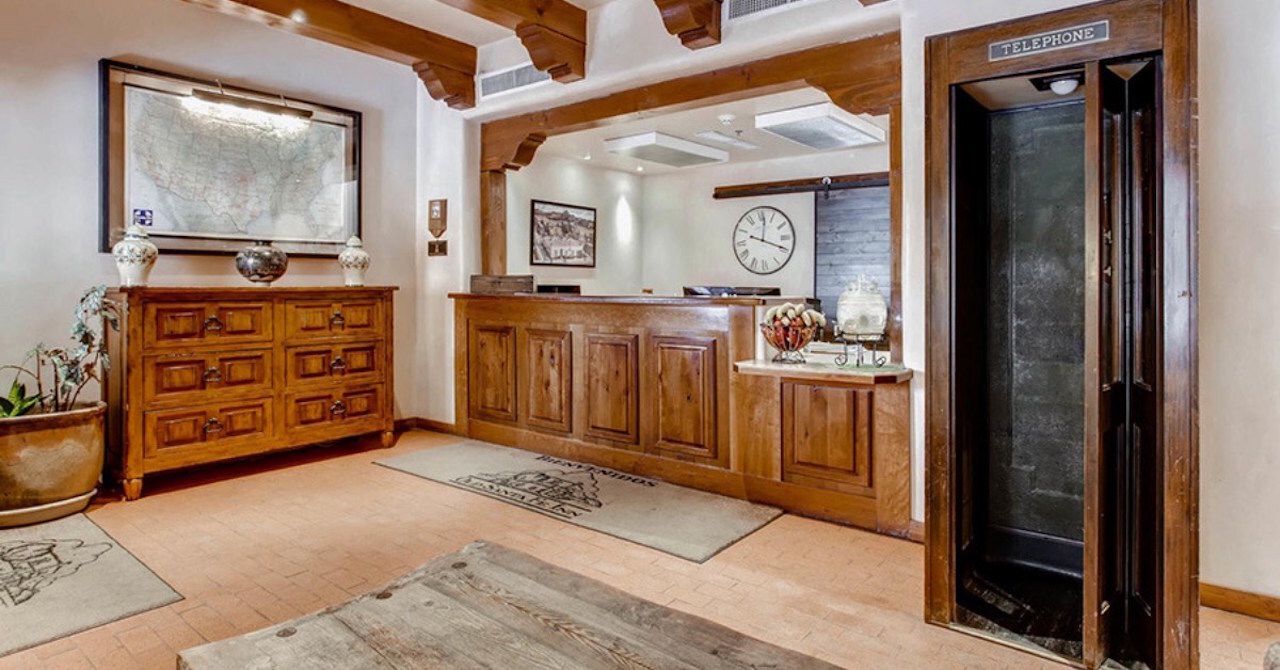 Now owned by a fourth-generation Santa Fe family, the Old Santa Fe Inn is modern but does not stray too far from tradition. The proprietors are passionate about Santa Fe’s history and diverse culture, and their choice of elegant Southwestern furnishings blended with classic modern amenities make for a comfortable stay. The motel also has a small business center with a 24-hour gym, which will come in handy after your make-your-own-breakfast-burrito buffet for breakfast. If you want to upgrade, the suites are spacious and offer nice added extras like a traditional fireplace and a jacuzzi bathtub. 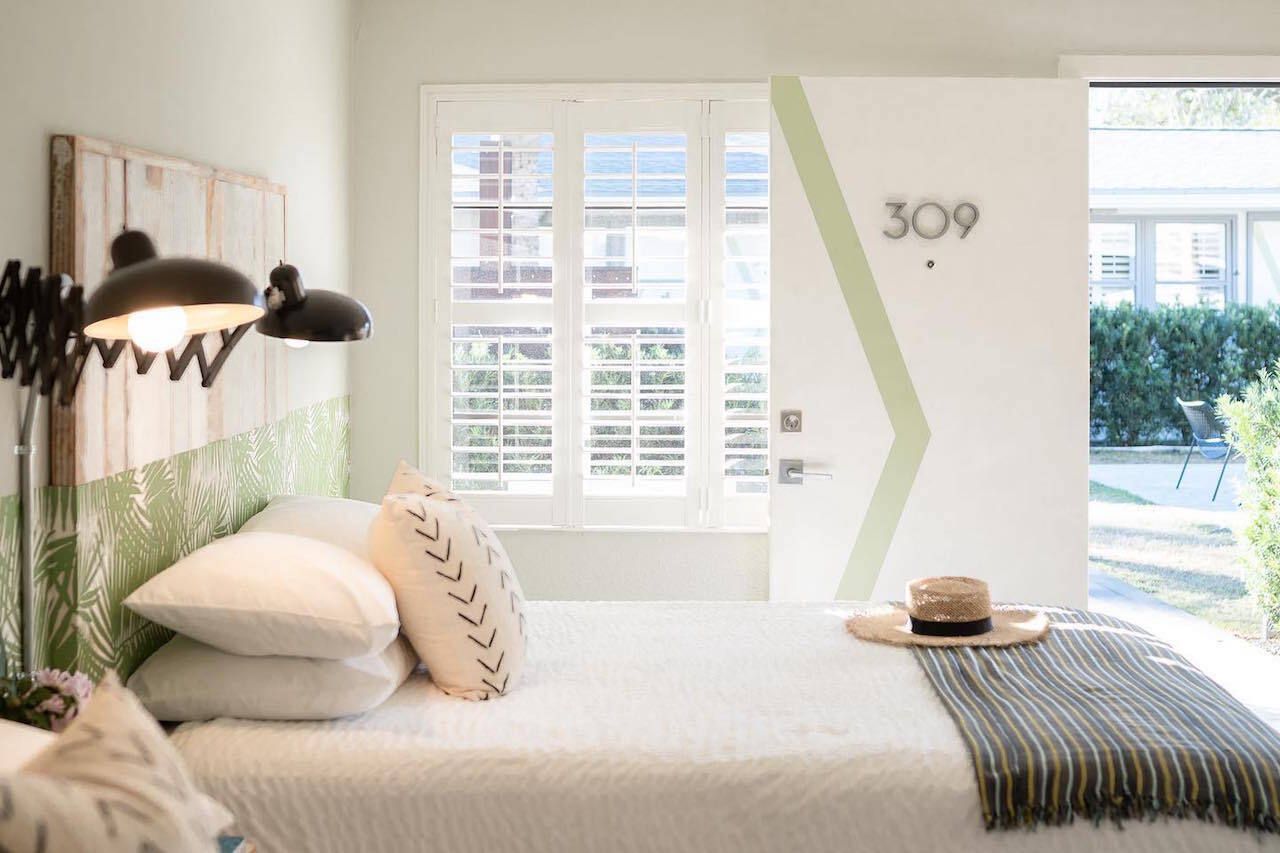 Hotel Palms is just off Atlantic Beach — three blocks to be exact — and was originally built in 1947. The modest motel has 11 rooms all with their own aesthetic. The property has an outside-inside ambiance that’s purposefully designed to blend with the local environment and culture. A large outdoor open fire with seating is inviting, and the space is often used for community gatherings for locals and guests. 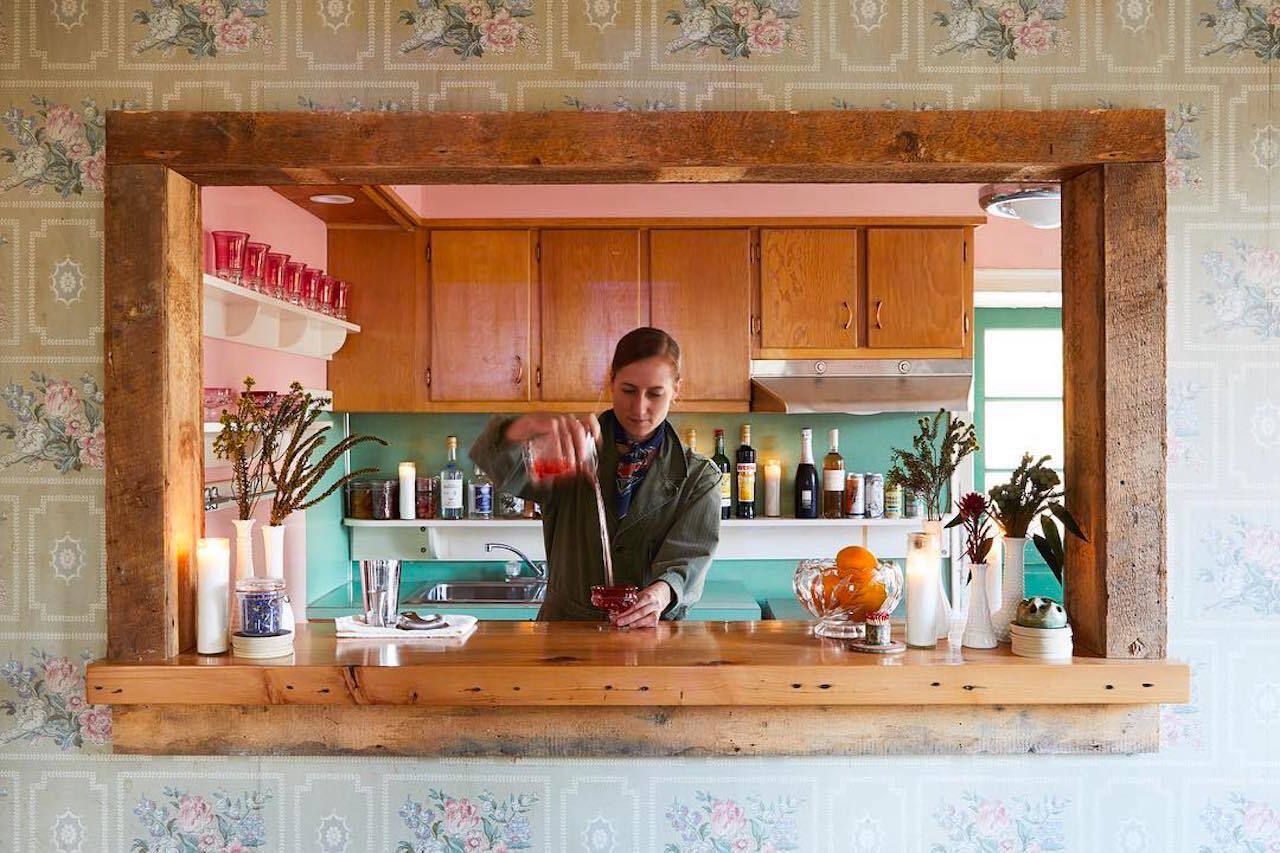 Set by the Hoosic River, outside of the town of North Adams in the Berkshires, the newly refurbished country boutique hotel TOURISTS is making quite a stir. The motor lodge was originally constructed in the ‘60s, and today the 48-room property has been rethought with a paired-down, comfy-chic style. Modernizations do not clash with the natural surroundings, as their use of raw materials and outdoor space harmonizes beautifully with the riverbank. The proprietors drew inspiration for the name of the property from the motel’s old sign “Tourists Welcome” and their desire to remove stigma from the term.

TOURISTS has an art and adventure coordinator, so just like summer camp, there is an array of activities to sign up to from apple orchard walks and apple squeezing in fall to waterfall medication hikes, forest bathing, and outdoor yoga. The property is also home to a barn built in 1813, which has been converted into a bar and bistro offering a creative cocktail menu and a seasonal food menu run by chef Ty Hatfield. The bar and restaurant are open to the public and are worth visiting even if you don’t end up staying as a guest.

The hotel prides itself on providing a very high standard of service from the booking stage, offering tips on the region as well as a very nice playlist on Spotify to get you in the vacay mood.

NewsAirbnb’s 10 Most Wish-Listed Properties Around the World
Tagged
Budget Travel Epic Stays United States
What did you think of this story?
Meh
Good
Awesome

May 2, 2022 Kristine Hansen
✖
travelstoke
Download the mobile app
stoked by