During the first wave of the pandemic, photographer Brian Bowen Smith parked his car in the middle of the street in Times Square and spent 15 minutes taking photos. Anyone who has been to, or even seen an image of, New York’s biggest tourist attraction knows that what Smith did would have been unthinkable prior to March of 2020.

Smith set out from his home in Los Angeles at the start of the pandemic with the goal of capturing this moment in history. He drove from coast to coast in a 1958 Ford F100, stopping in small towns and major cities and photographing people and places along the way with his Leica M10 Monochrom. He counted Reese Witherspoon and Common among his subjects, but also dairy farmers and people just trying to get by. 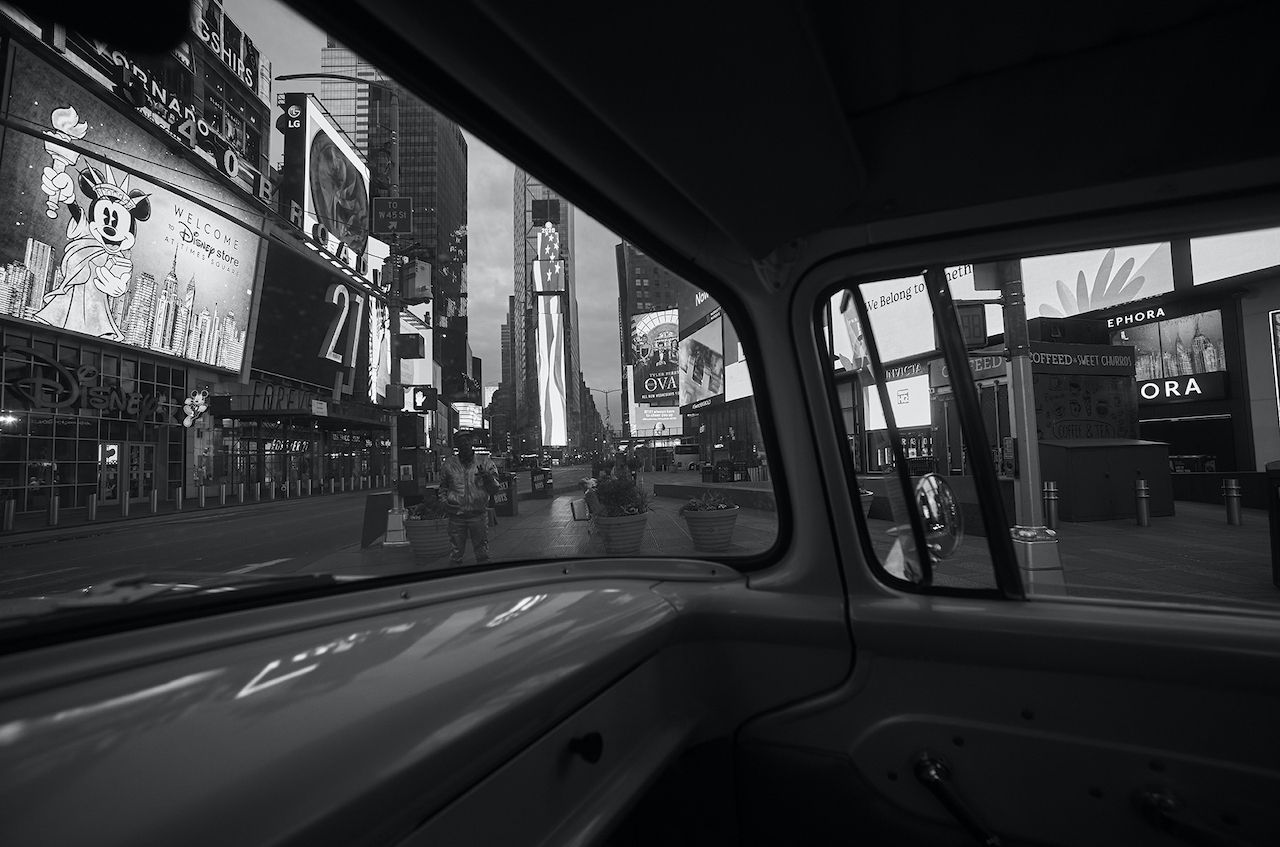 The project is far from Smith’s typical line of work. He’s made a living doing magazine shoots for the likes of Vogue and GQ, as well as high fashion ad campaigns. His subjects are typically stars like Dwayne Johnson, Miley Cyrus, and Christian Bale, but when the pandemic hit, this line of work dried up.

“I wasn’t working at all, so I had all the time in the world,” Smith says over the phone. There were many unknowns when he took off, from how long the pandemic would last to how safe it would be for him to travel. All he knew was that it had to be done quickly to document the day to day at a time when it felt like life itself was on pause. 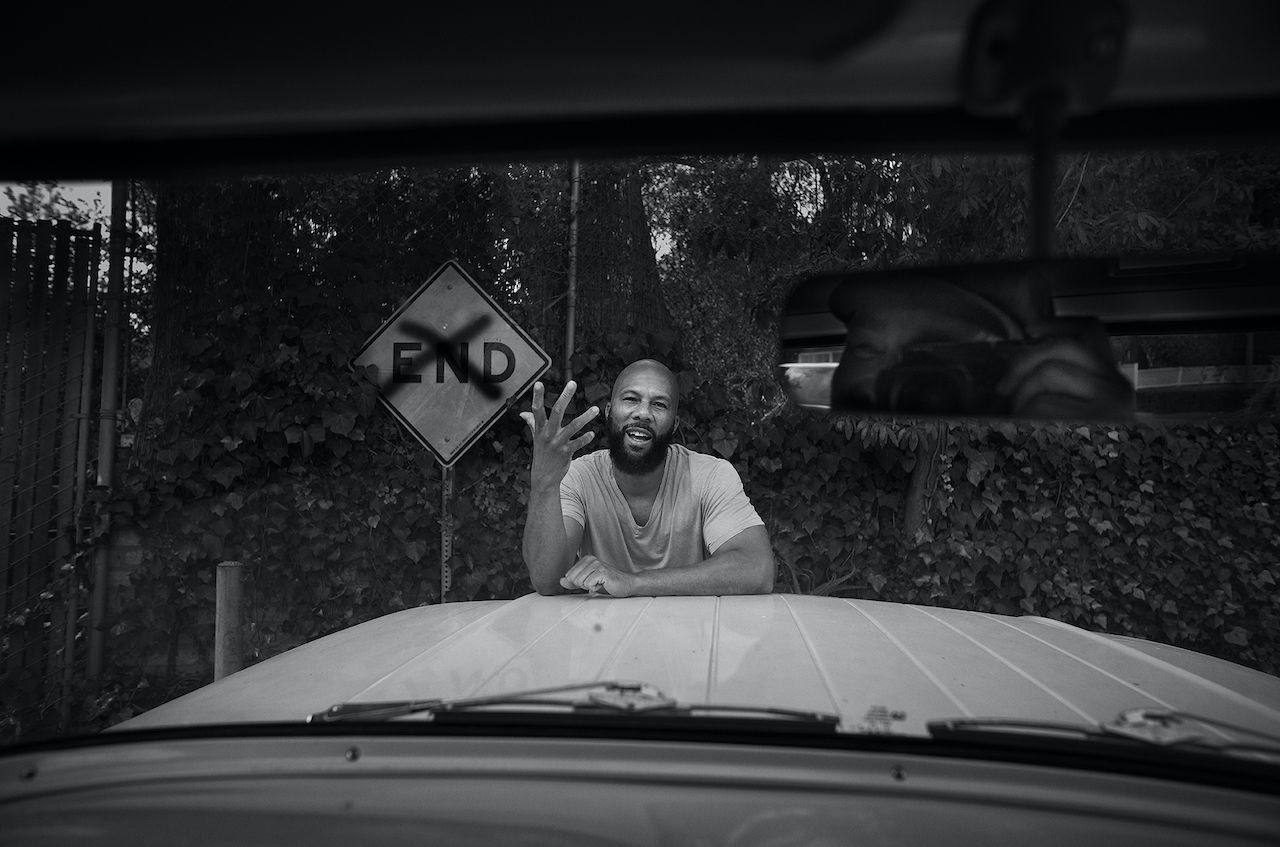 “I’ve never hit the road to do something creative as a photographer,” Smith says. “I’ve never had that luxury. I have to work, I have to feed my family, I have to stay busy. So I could never take off a month and a half and just go across the country. It was an opportunity that I knew if I didn’t do it right now, it was never going to be done by me.”

Smith, who is 51, wanted to keep a low profile and do a drive-by style series. The compact and fast M10 made that easier, and he stuck with one lens — the Leica Tri-Elmar-M 16-18-21mm — to keep things simple. The images were shaped into a book called Drivebys that’s available to purchase, as are select prints. It’s a look into the places that people missed as they stayed at home and tried to stay safe during the worst pandemic in recent history.

We caught up with Smith to learn more about the logistics of the cross-country trip and hear his stories of photographing the country in lockdown.

This interview has been edited for clarity and length.

What do you think black and white adds to the project?

It’s an important time to document what’s going on in the world. It takes away the distractions from all the different situations that I’ve encountered, and it’s more about the subject and the person as opposed to a nice backlight mid sunset glow. 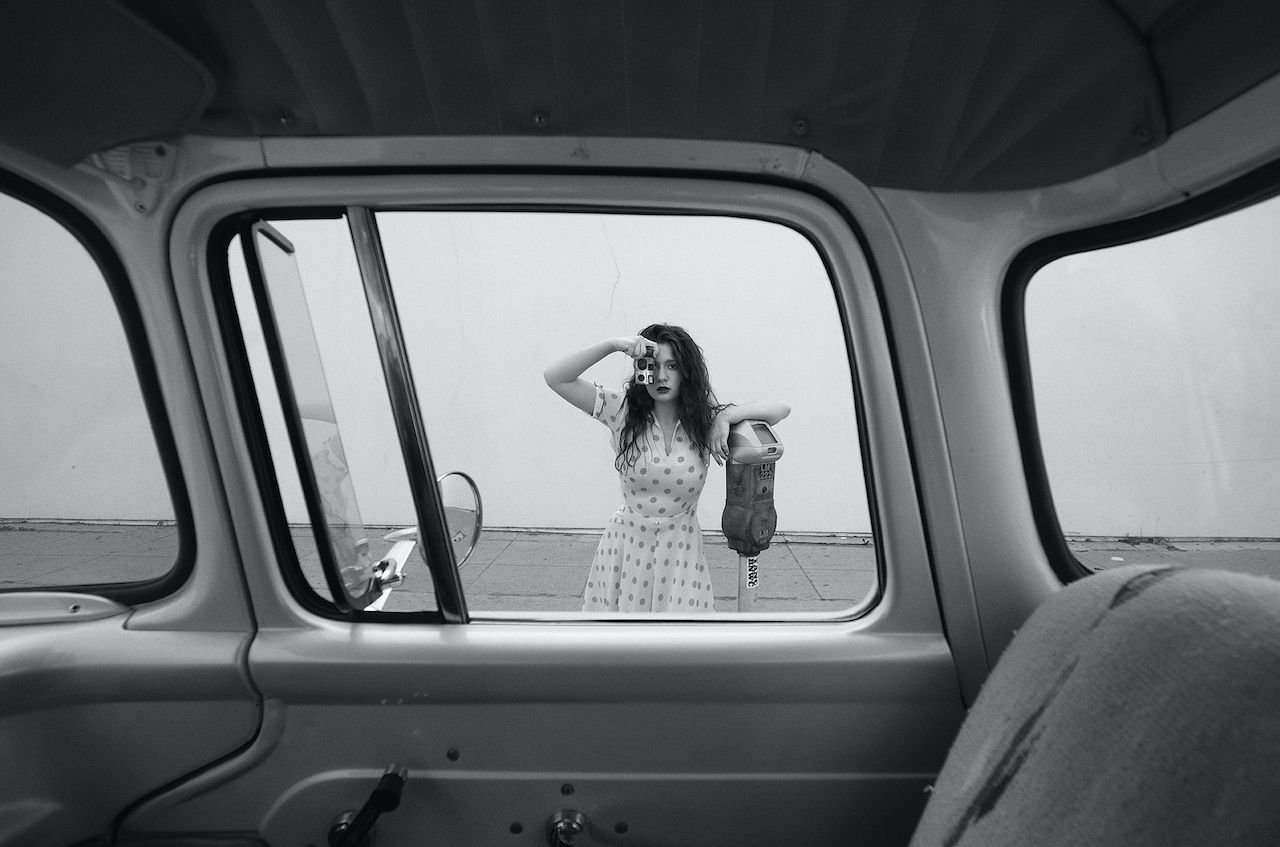 I needed something that would tie everything together, and black and white was the first thing I thought of. The Leica M10 Monochrom also has so much latitude — some of these things I’ve only got 30 seconds to shoot and you’re doing everything manual and on the fly, and this camera is easy to do that. 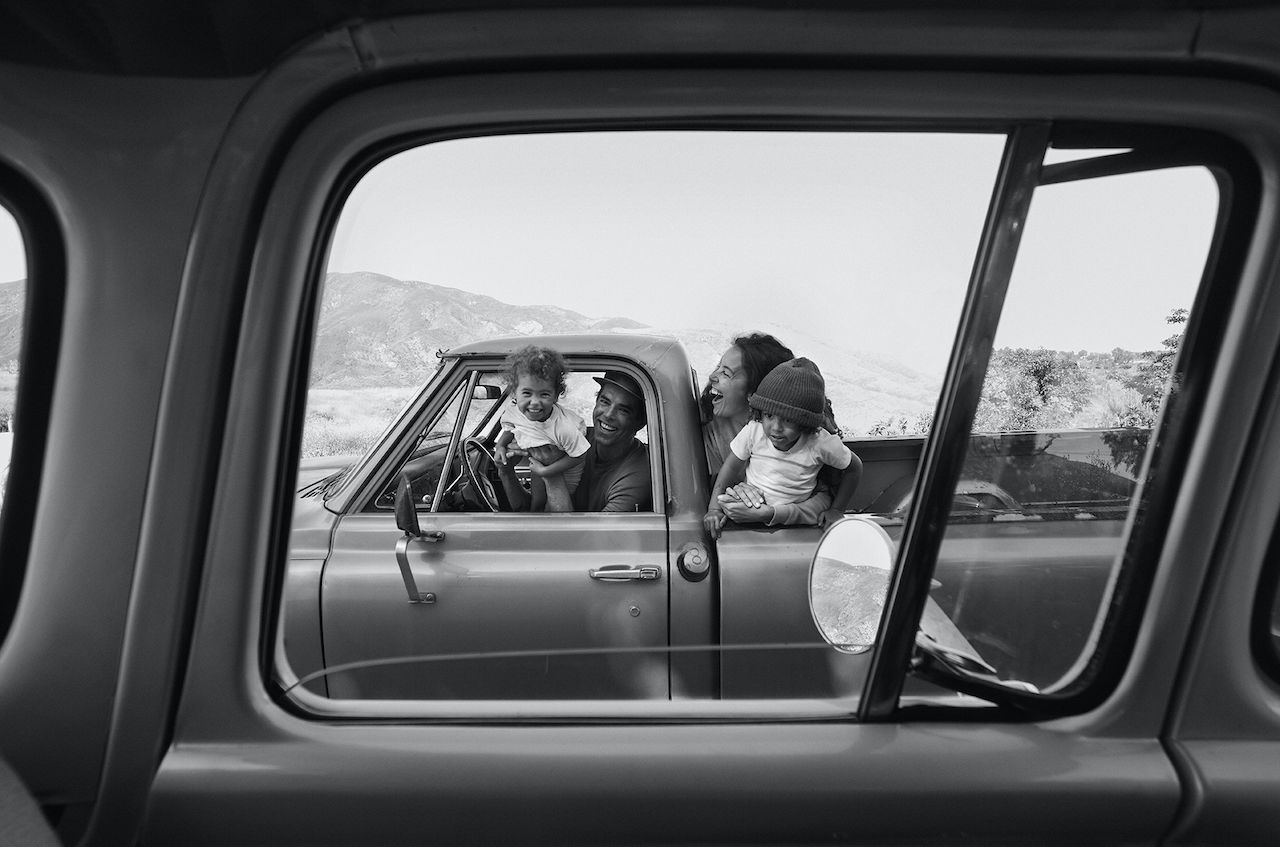 What’s on the back of the display is what you’re getting. I can be quick and know everything is there, bump up highlights and midtones later, and make it look great without having to really take my time.

What planning went into this trip? Any special precautions?

To be honest, the planning was very minimal. I decided to do it, then four days later I was on the road.

I knew it was going to be tough and I was originally going to camp so I could social distance, because it was in the heart of COVID and the heart of the whole country being shut down. It’s not like I could ask people if I could sleep on their couch or get a hotel. That wasn’t an option. 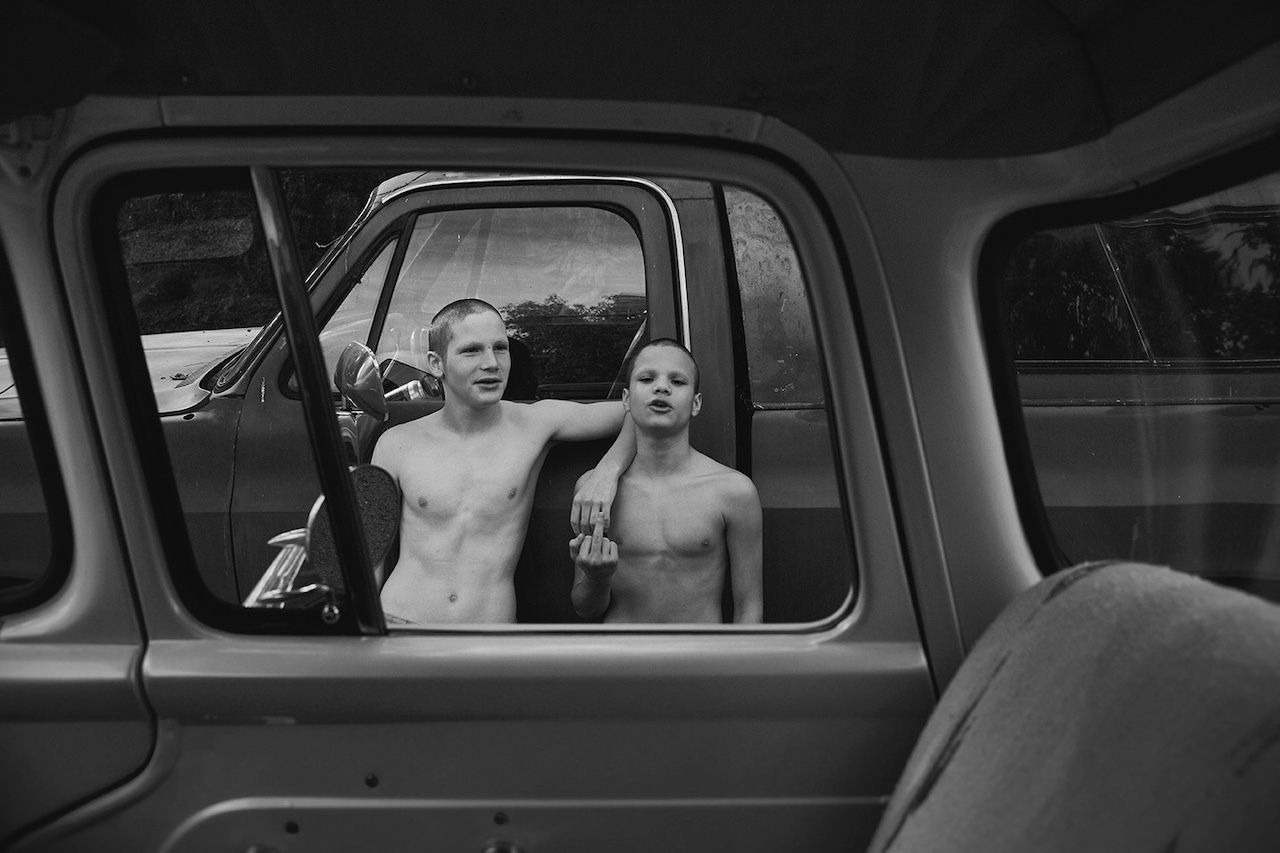 One of my assistants had a 1993 Winnebago, and so I put it to him and said, “Hey, do you want to join me on this trip and we can social distance in the Winnebago?”

He told me the next day, “Dude I’m in. I’m not going to miss out on this, let’s go.” So that was pretty much the planning. 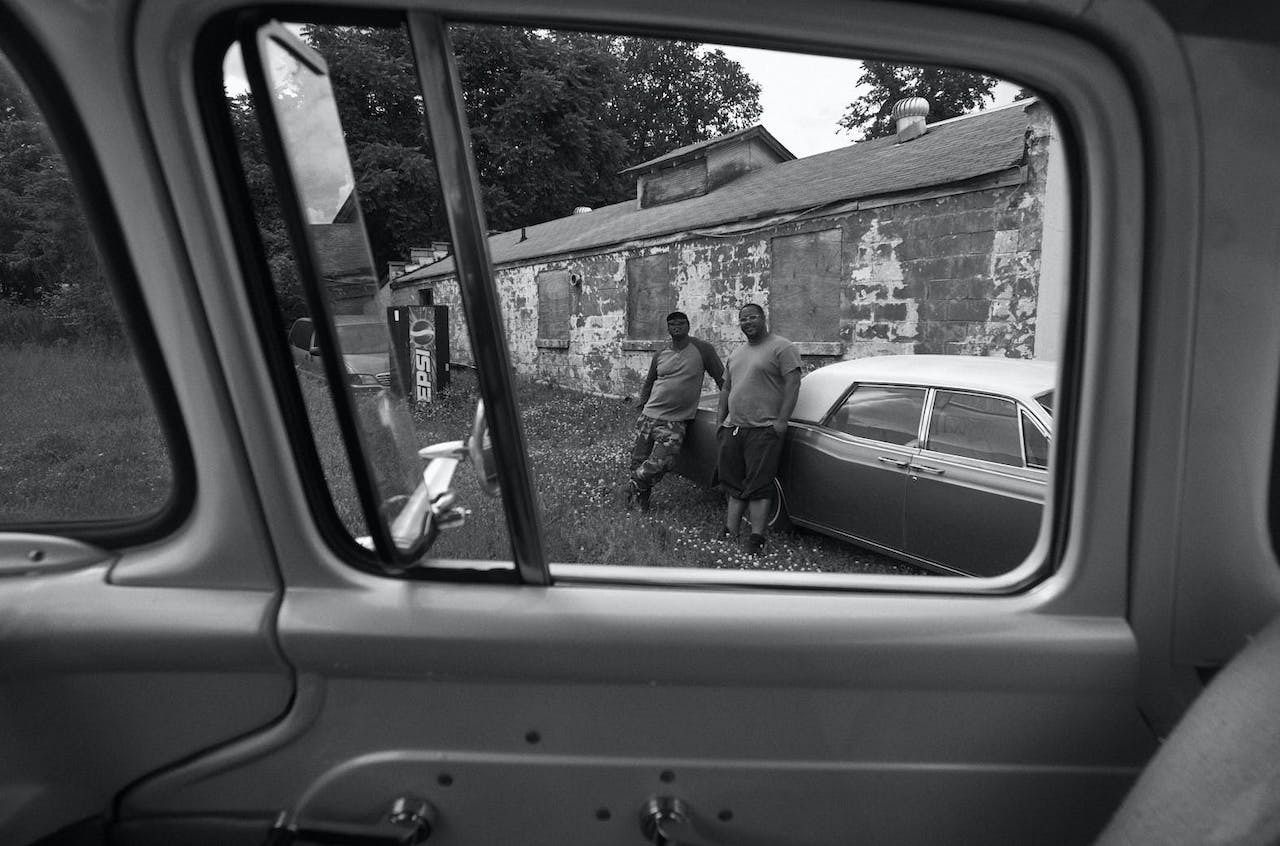 Then we very quickly learned we should have planned better.

How did you decide where you were going to go?

We kind of planned it when we were on the road. We didn’t really know where we were going, we let people from Instagram dictate the idea and then we’d follow them. 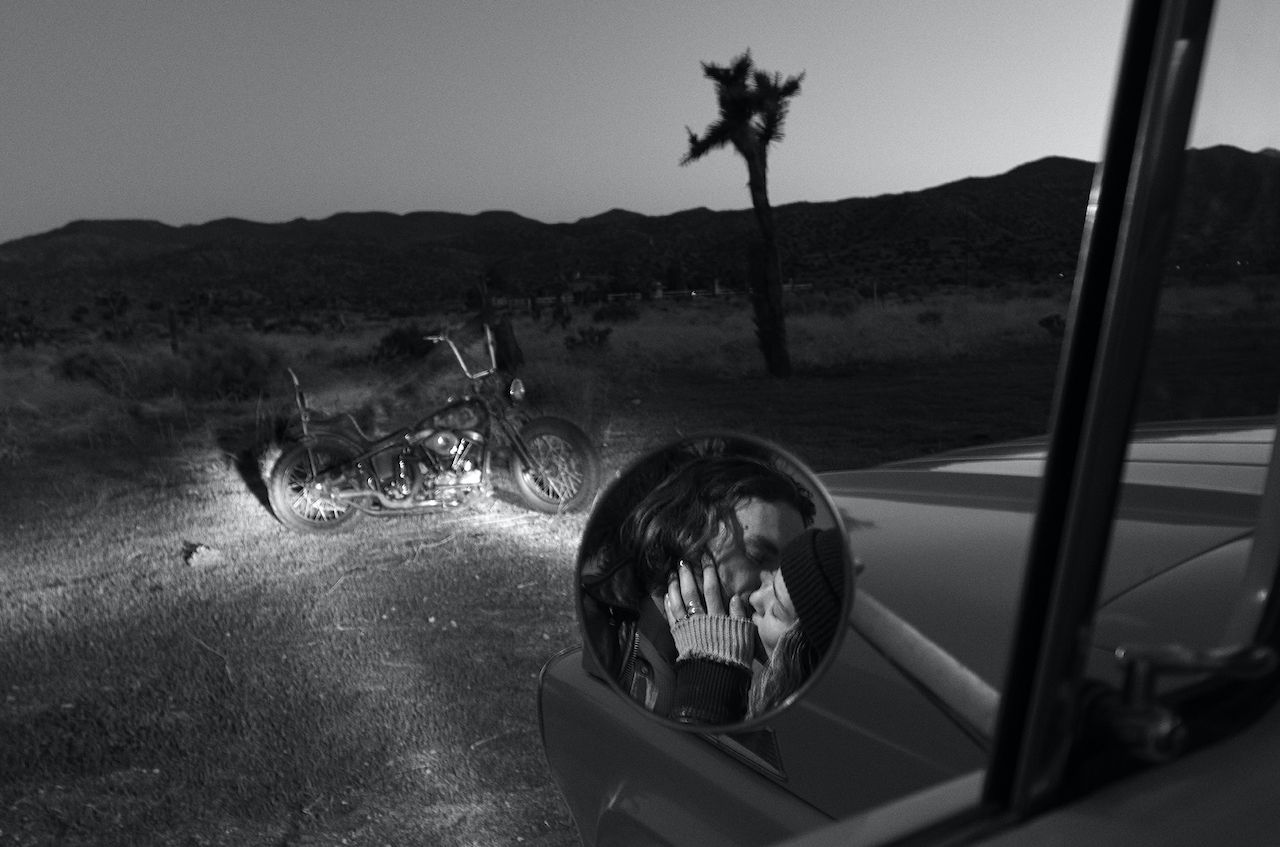 We originally had a plan to go through the southern route of the United States and come back across the country on the northern route. On day three that changed. We went from Las Vegas all the way up to the northern part of Oregon and into Washington. So that was 18 hours out of the way, but for a special shot.

And then we’re like, now what? People would message us “stop here,” and we’d look through Instagram and they would decide where we would go.

How did you find your subjects then with such changing plans?

Through Instagram. I wanted people to give me ideas that weren’t like, “Oh, I’m in my window. You can take a picture of me and my family.” That’s sad. I didn’t want to do that. I wanted to find someone I’ve never met who has never been told in their life that their picture looks cool, and then do something that’s fun for both of us. 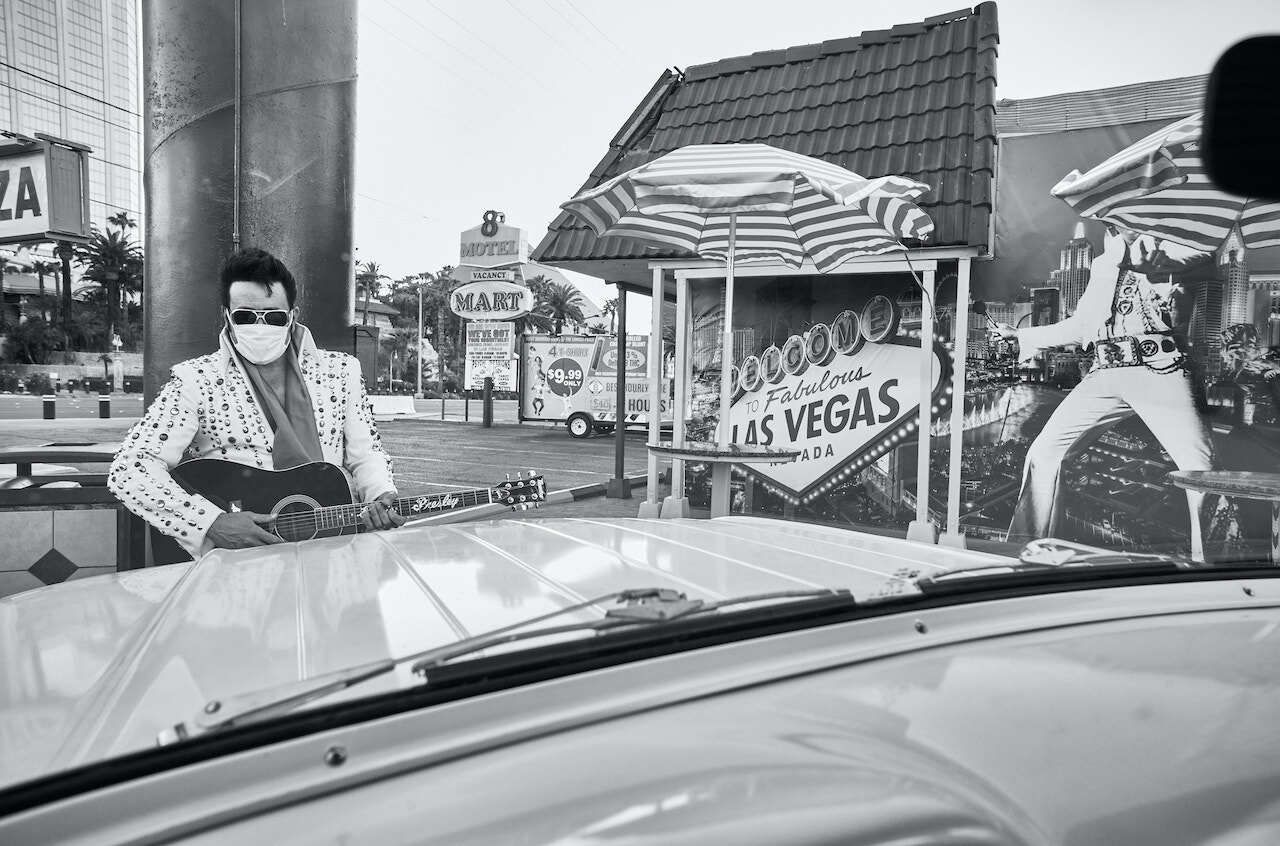 My first stop I got seven pictures. We were three hours from Vegas, so I Instagrammed “Who in Vegas is in town?” I got an Elvis impersonator who was like, “Dude what about Elvis in a mask?” It doesn’t get more Vegas than that. 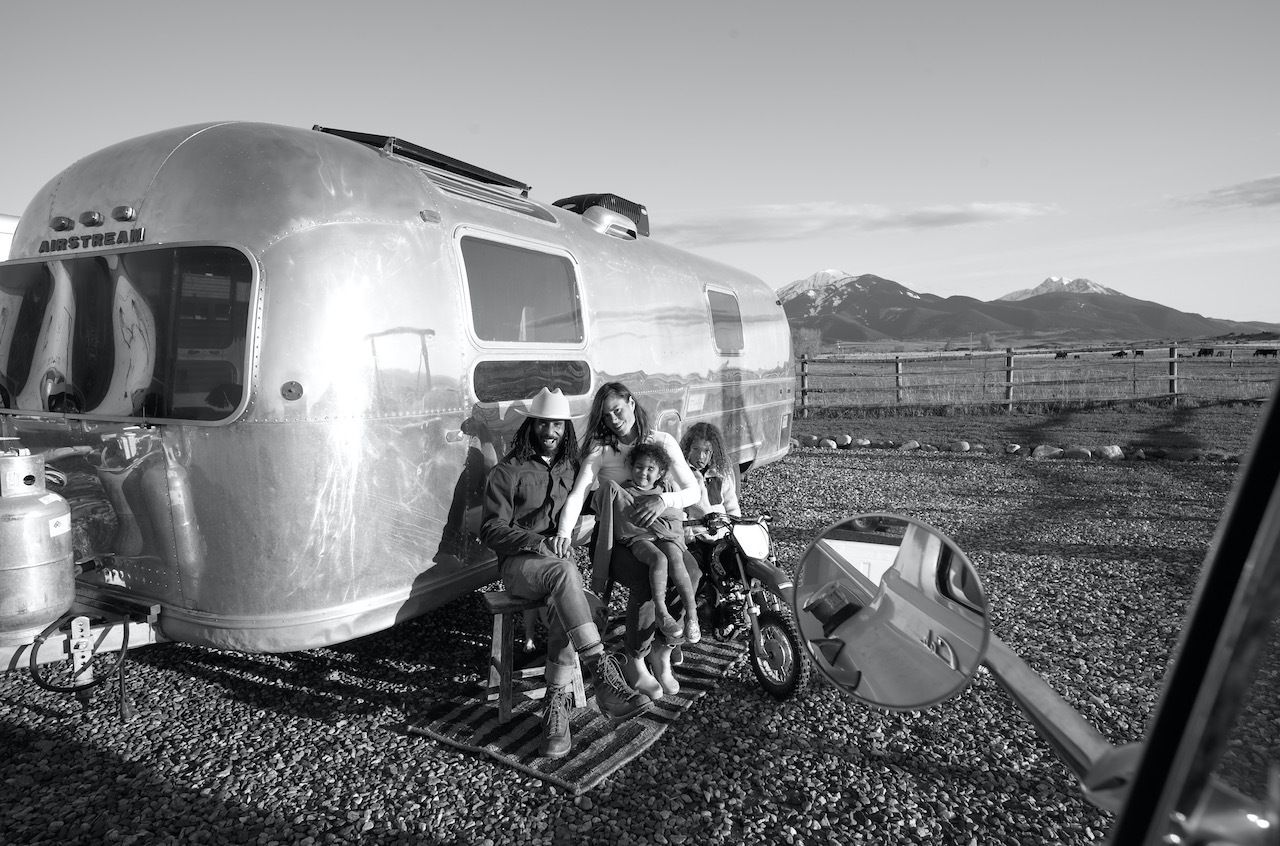 I would filter through Instagram and find things, or someone would be like, “Hey this is our story: We’re a fourth generation dairy farm, and this is hitting us super hard and we’re having to dump out milk because we can’t stop milking our cows, but the demand isn’t up so no one is buying it. We run the farms ourselves so all the family is helping now. We had to let some employees go, so now we get up every day at 4 in the morning.”

This is important. This is part of what this whole thing is about. So we went and put a baby cow in the picture, and had an old school pail that you used to milk with so it looks like Robert Frank’s United States.

Robert Frank’s America — was that a big inspiration? Were there others?

There were so many inspirations. Another was Richard Avedon’s In the American West. 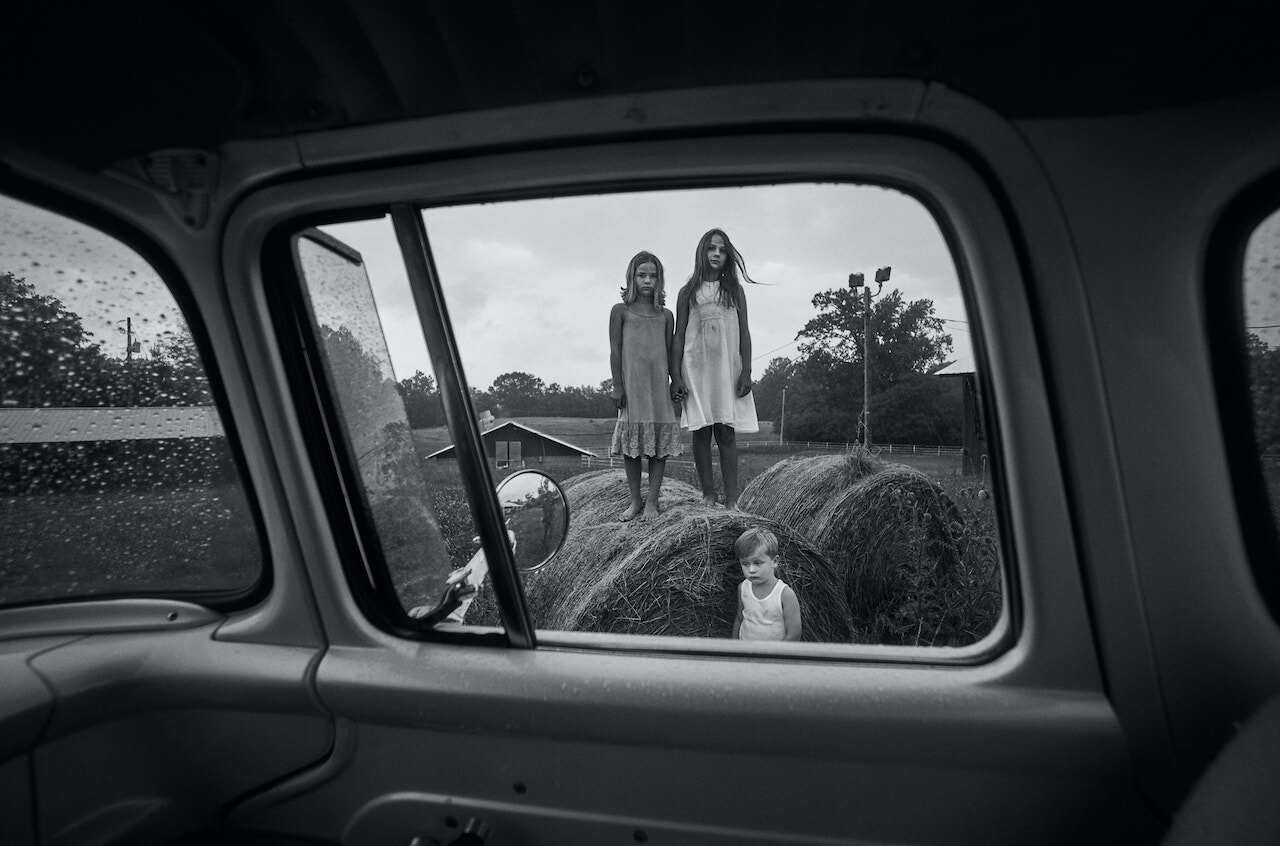 The people are the focus but there’s a lot of open road on that trip too. What came from those road shots?

I had the camera on my hip when I drove, and if I saw something I just, boom, snapped a picture of it. So every time I got in the car, if it was an overcast day, I set the camera up for situations and I put the camera on Infiniti. 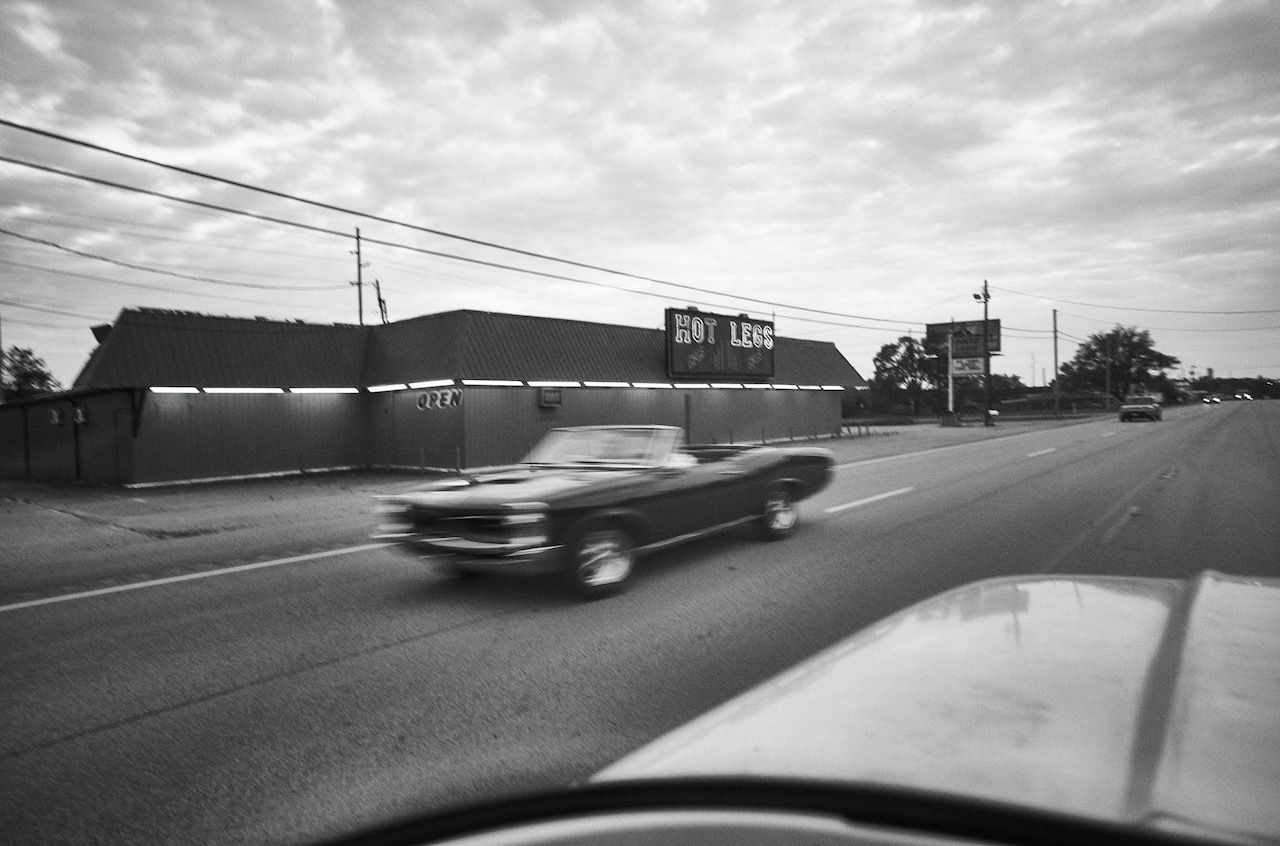 One of my favorite shots in the book is this strip club in Kentucky. As I’m about to take a picture of it, I see this muscle car coming down the street. I got the camera and I slowed down, but I see cars are coming up behind me so I can’t stop and I’m trying to time it right to get that muscle car with no other cars passing me in front of the strip club. So within a 20 second scenario that felt like 2 seconds, I miraculously pulled it off, but it wasn’t planned. 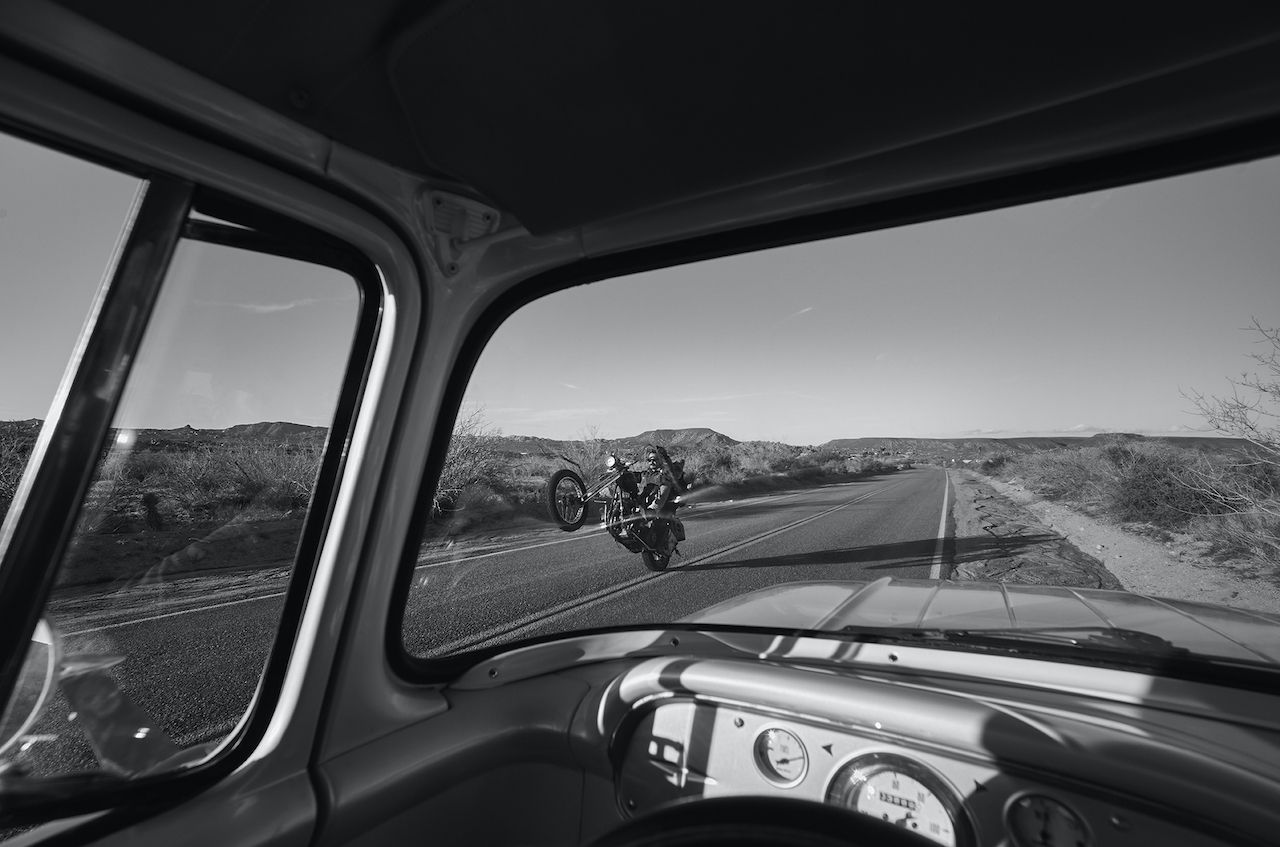 I’m just constantly looking around for pictures driving that truck, which was part of the point of the truck in the first place. The windows are almost 360 degrees around. You can see out of that truck so nicely, it’s like watching a big TV. I wanted to find those places that have such good character that, even though it’s a landscape or an old closed shop, it looks really cool and deserves to be there in the book.

What impression did seeing these iconic places closed or empty have on you? Was it depressing?

On one drive I busted out in tears and though, you know man, I can’t believe I’m doing this. I felt so sad for all those little towns and so sad for what’s happening, and I wondered, “Am I a scumbag for even taking pictures of this while people are losing their houses and losing their lives?” 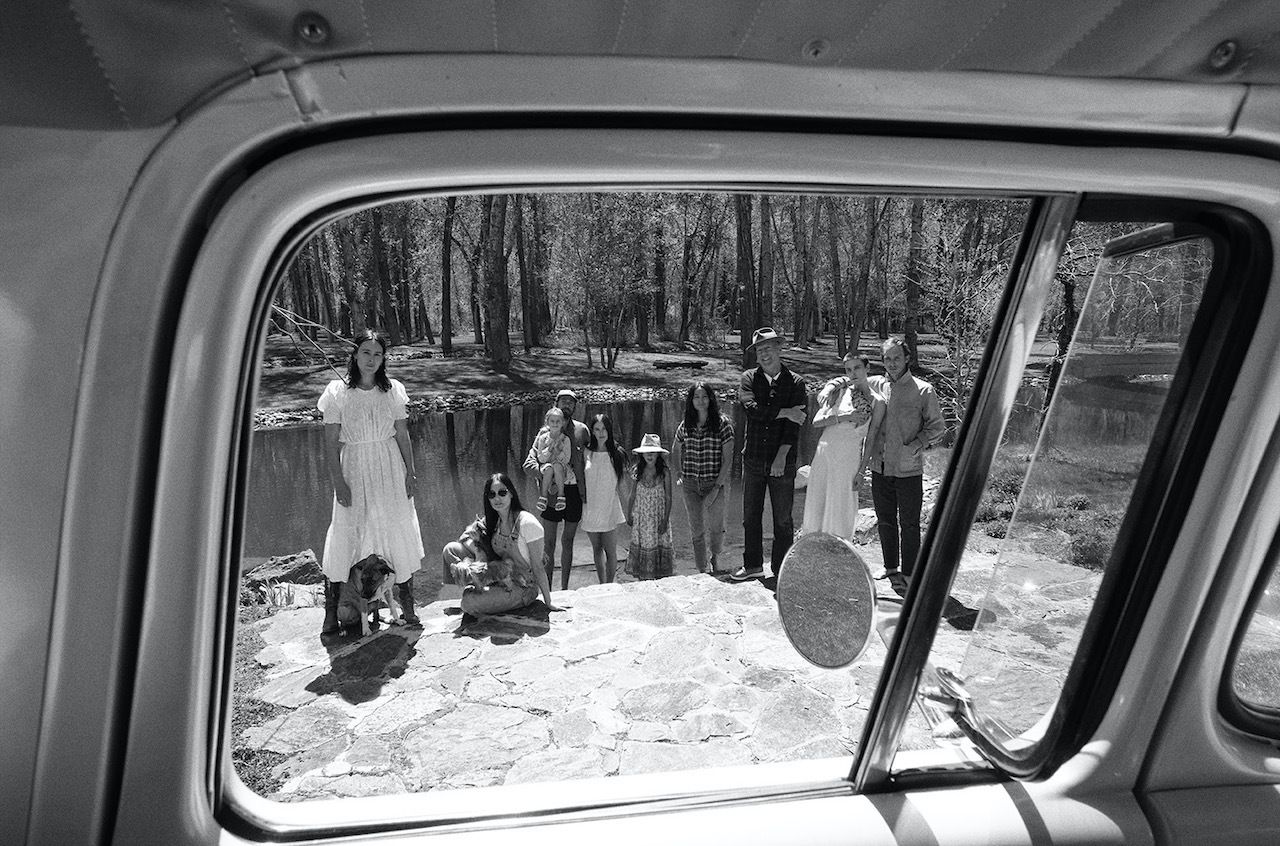 Rich people are going to be able to rebuild. Their insurance is going to pay for the damages. But when you’re living in a small town and you have a diner and 20 people that come there, when that goes away you don’t have anything else. Those people still have to pay their mortgage. They don’t own their houses. They can’t just say I’ll get another job because there aren’t any other jobs. 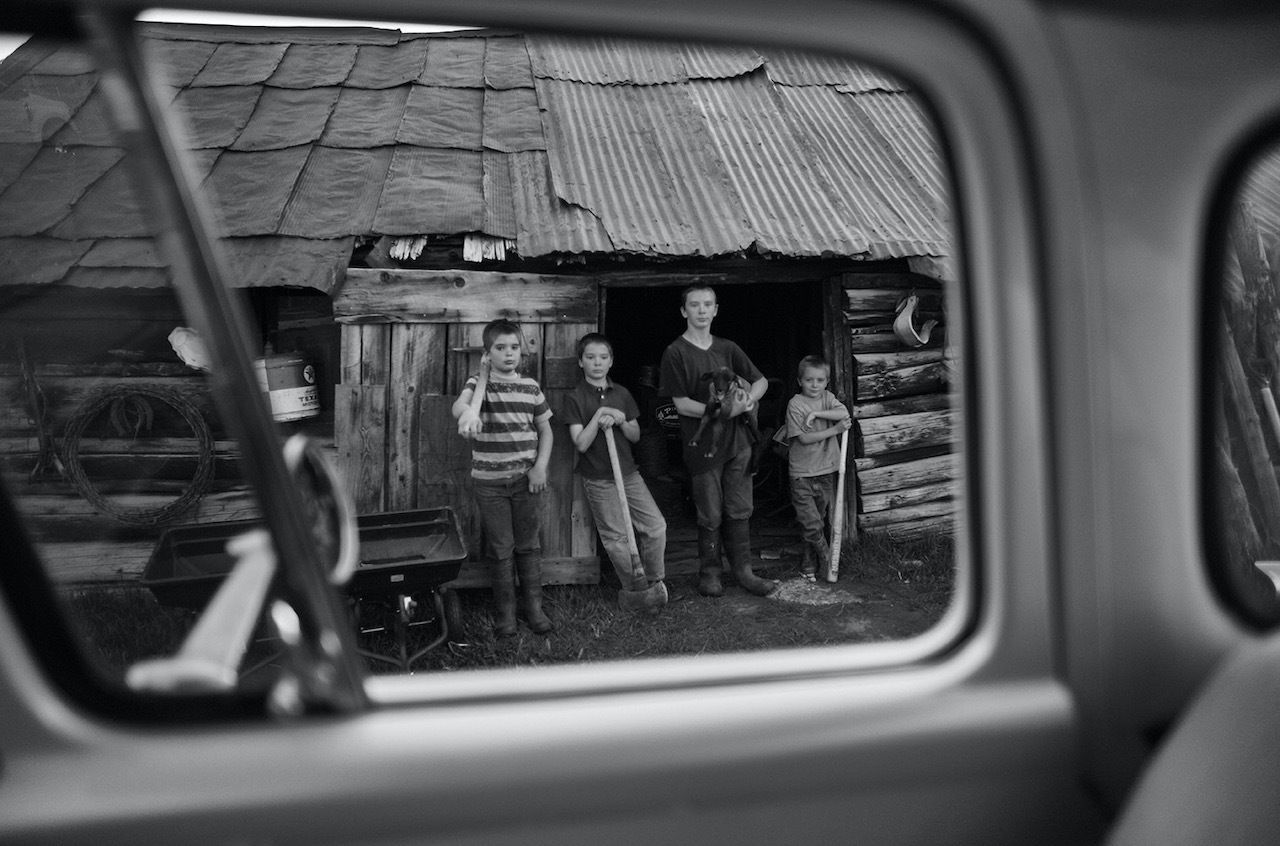 When you go into those towns, you think, “How will they recover? How will this get fixed?” And then I think about the rest of the world.

What lessons do you want people to take away from this project?

The main takeaway is I want people to enjoy the book and enjoy the photographs. Then I want them to look at it over and over and form their own healing. 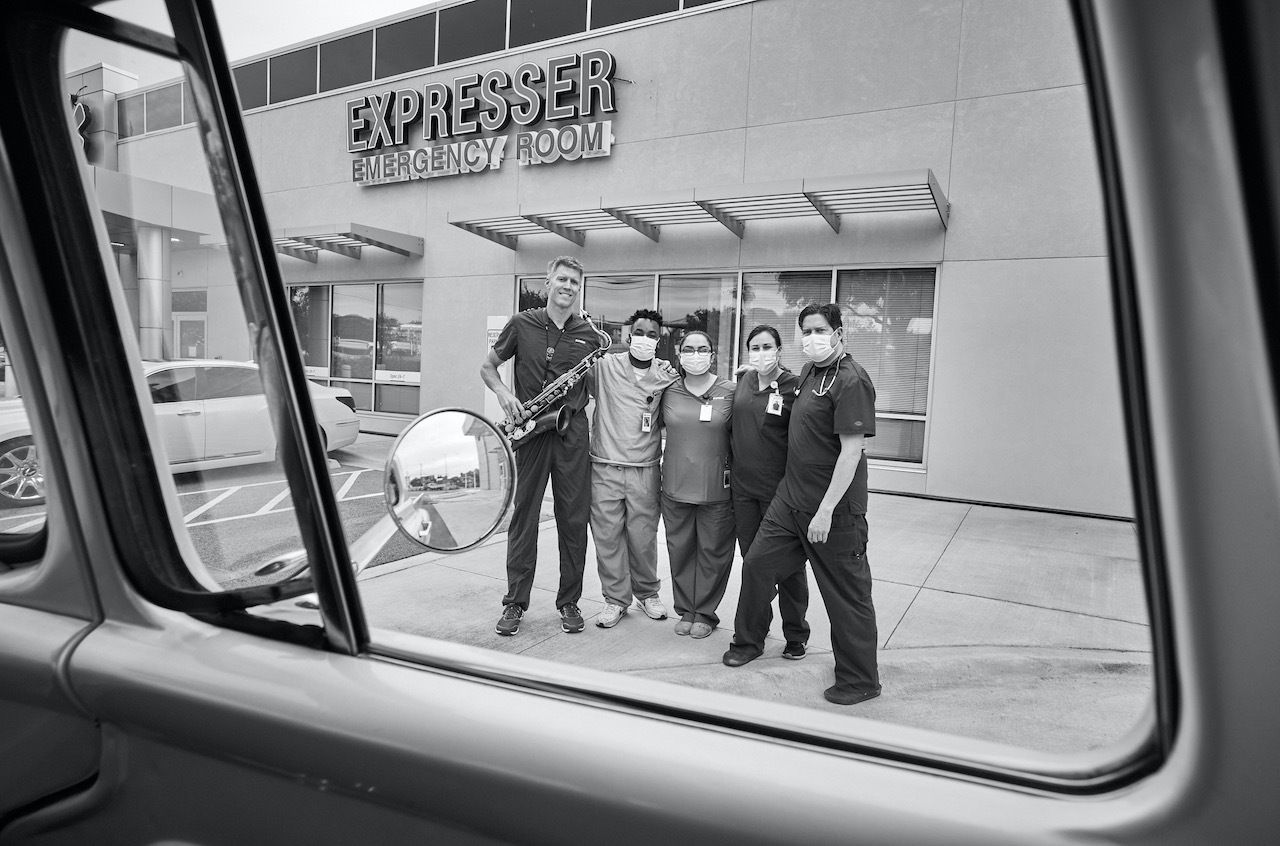 I’m giving proceeds from the book to Feeding America, so I’m not trying to profit off the pandemic or profit off being able to do this. I want to give back. I want this to be good for someone else.

Anything else you’d like to add that we haven’t covered yet?

With a good idea and the right people, anyone can do anything. 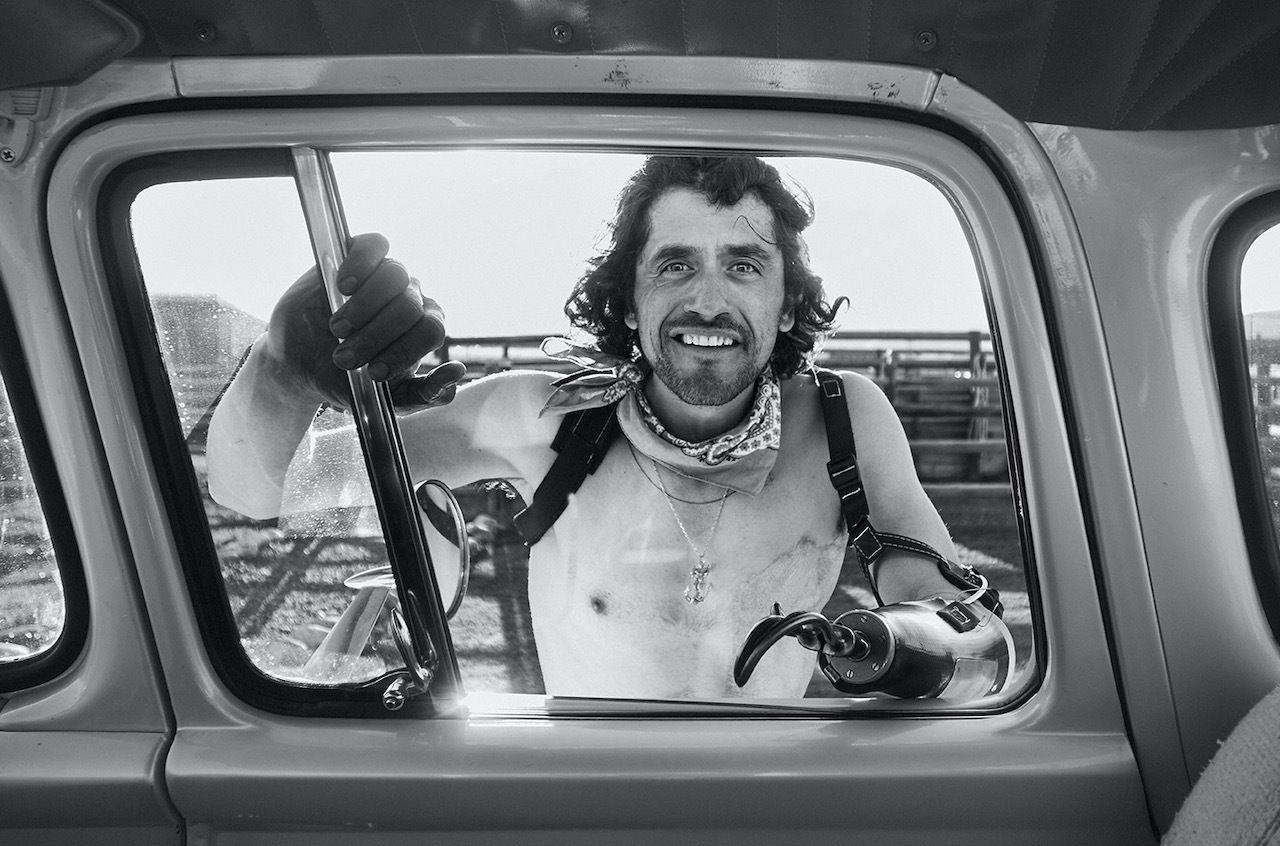 OutdoorPhotographer Chris Burkard on How To Become an Adventure Photographer
Tagged
Art + Architecture Books Road Trips United States
What did you think of this story?
Meh
Good
Awesome