Will Padilla-Brown freely admits he didn’t know anything about mushrooms when he first began foraging. He didn’t know the names of the trees around him, any nearby waterways, or how mushrooms moved. But the mushrooms called to him, nonetheless — and he thinks that anyone else with even the smallest interest mushrooms can venture into the woods and begin their own mushroom foraging journey.

“I didn’t know anything about nature,” Padilla-Brown says. “I just wanted to go find these mushrooms. So figuring out how to find them, I realized that I learned a whole bunch of other things along the way.”

Padilla-Brown is now a mycologist, entrepreneur, educator, and the founder of the company MycoSymbiotics. He’s learned to navigate nature as an expert, with reverence and understanding. He’s also coined a term for how amateur and wannabe mycologists should think about mushroom foraging: the “Hooked on Phonics of ecological literacy.”

What he means by that is that if you’re passionate about mushrooms, you can learn everything you need to know about nature along the way. That’s why Padilla-Brown feels that everyone should be empowered to become a forager. One great way to dip your toe into mushroom foraging is during your travels. 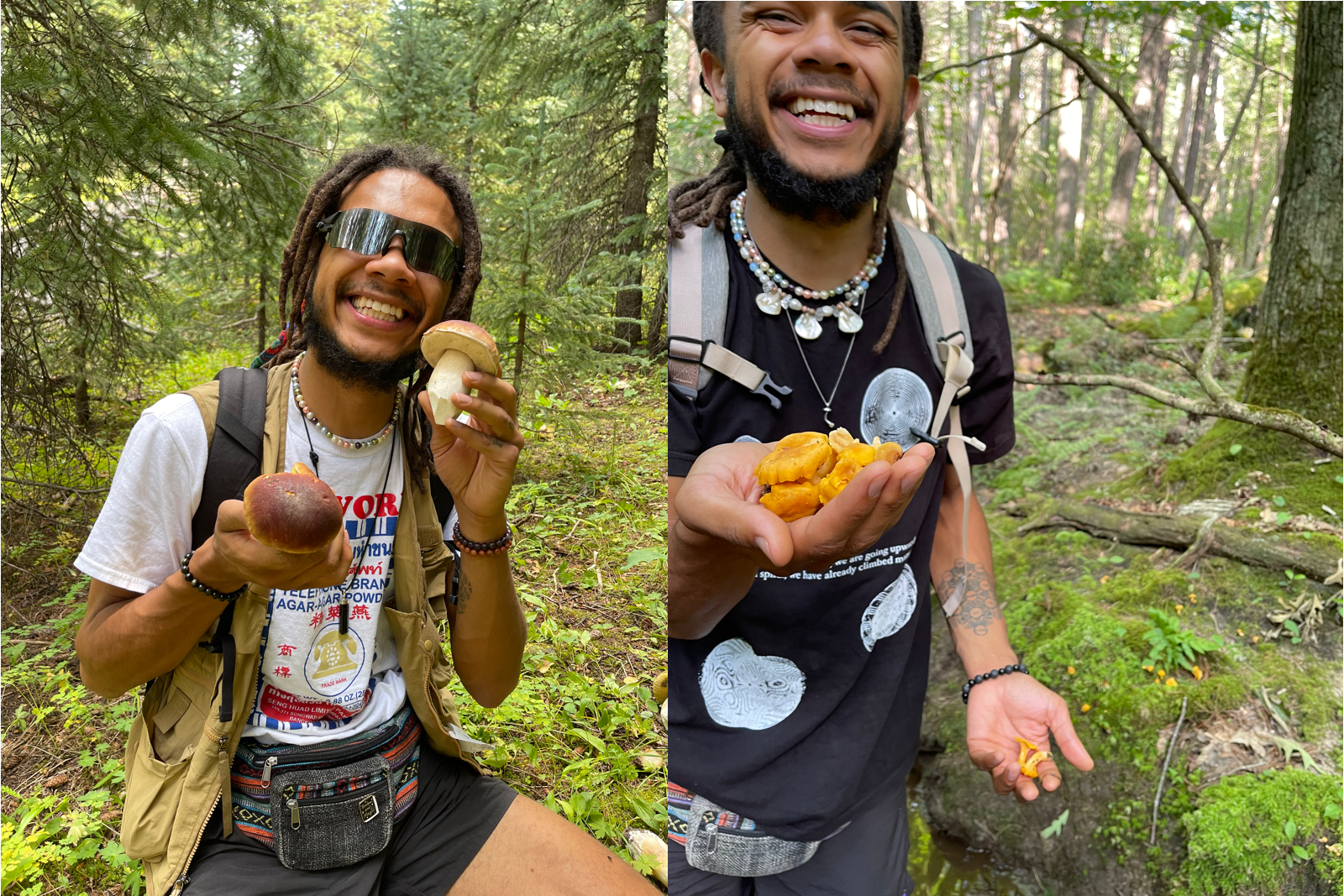 Why dedicate part of your hike or camping trip to mushroom foraging? There are so many benefits to harvesting your own food, from integrating higher quality (and less expensive) food into your diet, to learning more about the landscape that surrounds yous. And Padilla-Brown praises the fact that foraging gives people access to healthy food that is good for the environment.

“Foraging for mushrooms is one of the most sustainable food foraging that you can do because the mycelium isn’t really affected by you picking a mushroom off of it,” he says.

In addition, he argues that foraging on your travels opens up a new perspective on the place that you’re visiting. This in turn can deepen your understanding and appreciation of nature.

“[Foraging] brings more magic into life,” he says. “It’s become so monotonous when you travel across the United States. Every stop is like, a Family Dollar and cookies from the gas station. So whenever you can, go into each of these regions and really taste the terroir. By foraging, not only do you get the free food and get to be sustainable, but you also get to really taste what the environment has to offer, and really get a feel for what that area is like. I think that really increases people’s value of nature and desire to protect and care about it.”

If you’re looking to give it a try the next time you venture out, Padilla-Brown has five key tips for how to go mushroom foraging while traveling.

How to go mushroom foraging while traveling

1. Use apps to help identify mushrooms

Padilla-Brown advises against trying to overload your luggage with every book on mushrooms and mycology that you can get your hands on, especially if you’re camping or traveling in a van where space is limited. But it’s still important to reference expert information on the mushrooms you might encounter. Travel foraging can be dangerous for people who aren’t experienced, because they are going into a new area without much familiarity with the plant and fungus life. That’s where apps that can identify any mushrooms that amateur foragers find in the wild come in handy. 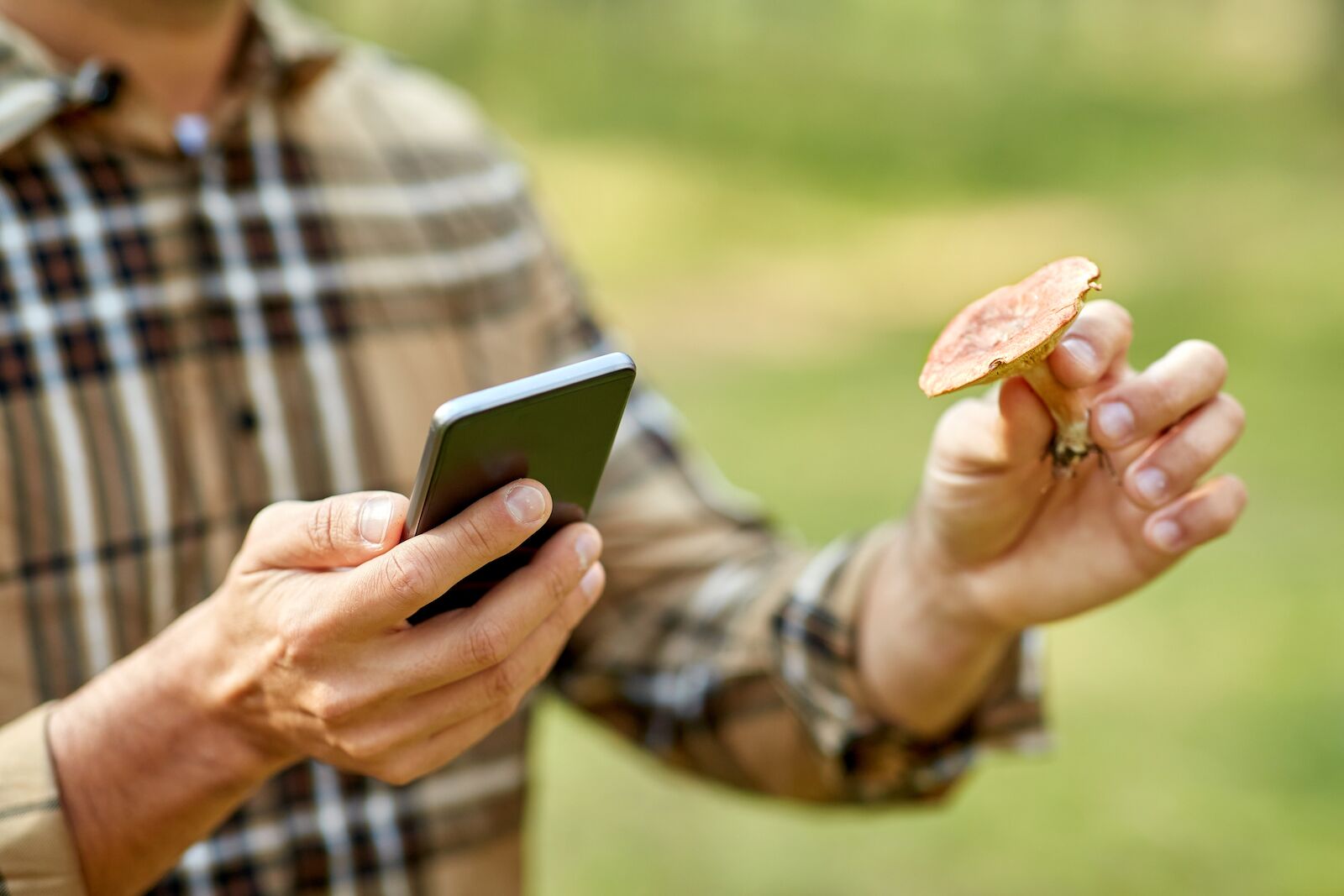 “I like iNaturalist and Seek by iNaturalist,” he says. “I’ll be traveling, I’ll find an organism, a mushroom, a plant, or fruit, and I take a picture of it, I identify it, and I put the geotag location where I found it on iNaturalist. Anybody can go on iNaturalist and see what people found and where they found [it], and then it’s cross referenced by other scientists and make sure that it is exactly exactly what you said it was.”

Once you’re out in a forest foraging, you’ll want to use Seek by iNaturalist. When you come across a plant or other organism you want to identify, you take a picture and the app operates like a search engine by sorting through all the photos in iNaturalist for a match. It’s a huge help for people who want to make sure they aren’t about to take home a bounty of poisonous mushrooms.

Of course, even the expert-vetted apps can be wrong. That’s why Padilla-Brown recommends supplementing any searches on iNaturalist with your own community of like-minded foragers who are also learning about mushrooms.

“There’s a lot of really good Facebook groups,” he says. “Take a picture of the top of the mushroom, the bottom of the mushroom, the cap, the gills, the stem, where you found it, and the trees around it. You can put that kind of information on the internet and there are thousands of people that could say what it is.”

Padilla-Brown says Youtube is another great resource for newcomers to foraging. His channel, Apex Grower, has around 300 videos on foraging. He also recommends the account Learn Your Land for even more instructional foraging videos. 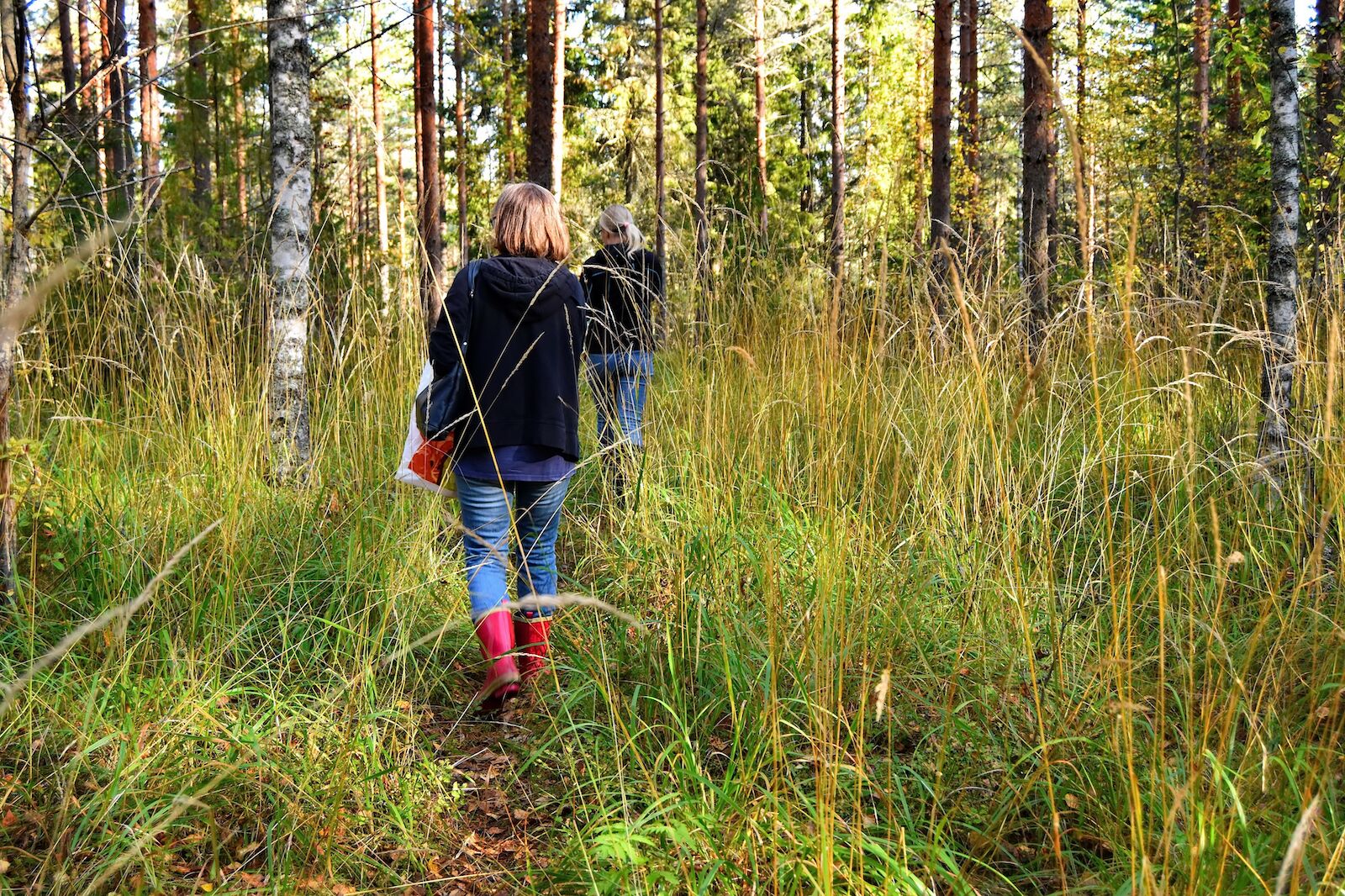 If you’re traveling somewhere new, Padilla-Brown also recommends going to local farmer’s markets to scope out what mushrooms are being sold to get an idea of what’s in season and what edible mushrooms look like. It’s also an opportunity to chat with vendors to learn more about local mushrooms in the area (even if they might not divulge their best foraging spots).

Chatting with strangers and researching online can only take your foraging journey so far. If you’re serious about learning the art and craft of foraging, you need to get face time with an expert. Padilla-Brown suggests starting with a mushroom certification course.

Most expert foragers are notorious for refusing to share their favorite places to forage. So even if you have a community of foragers behind you, there’s a strong chance you’ll have to stake out your own spots. But there are ways to identify where mushrooms are growing if you’re passing through an unfamiliar area. One thing you can do is simply follow other foragers online and see what they’re harvesting at any given time of year, then go on iNaturalist and track down where other people have stumbled across that particular mushroom. But a some light detective work will usually get you to where you need to go, even without the help of an app.

“The best thing to do is to figure out what [a mushroom’s] habitat is,” he explains. “Mushrooms usually grow in association with a tree or in other plants. Plants usually grow in a place that has certain minerals in the soil, or water, or certain elevation. A couple Google searches will tell you all that information. Then you can drive right to where the mushrooms are. For instance, chanterelles like to be in an oak forest. So if you can find somewhere on your map where there’s big oak forest and then hike around in there, you’re probably going to find chanterelles. It doesn’t matter if you know where the spot is or not.”

4. Don’t try to learn the name of every mushroom on the planet

Padilla-Brown says that it can be easy to get overwhelmed with the thousands of mushroom species out there. He recommends considering general types of mushrooms that are edible and that can be found all over the US rather than trying to memorize the name and appearance of every species of mushroom on Earth. Two examples that Padilla-Brown mentions are oyster mushrooms and Lion’s Mane mushrooms. There are many different species of these, but they are edible and can be found all over the country. Once you can recognize those mushrooms in one place, you can recognize them anywhere. 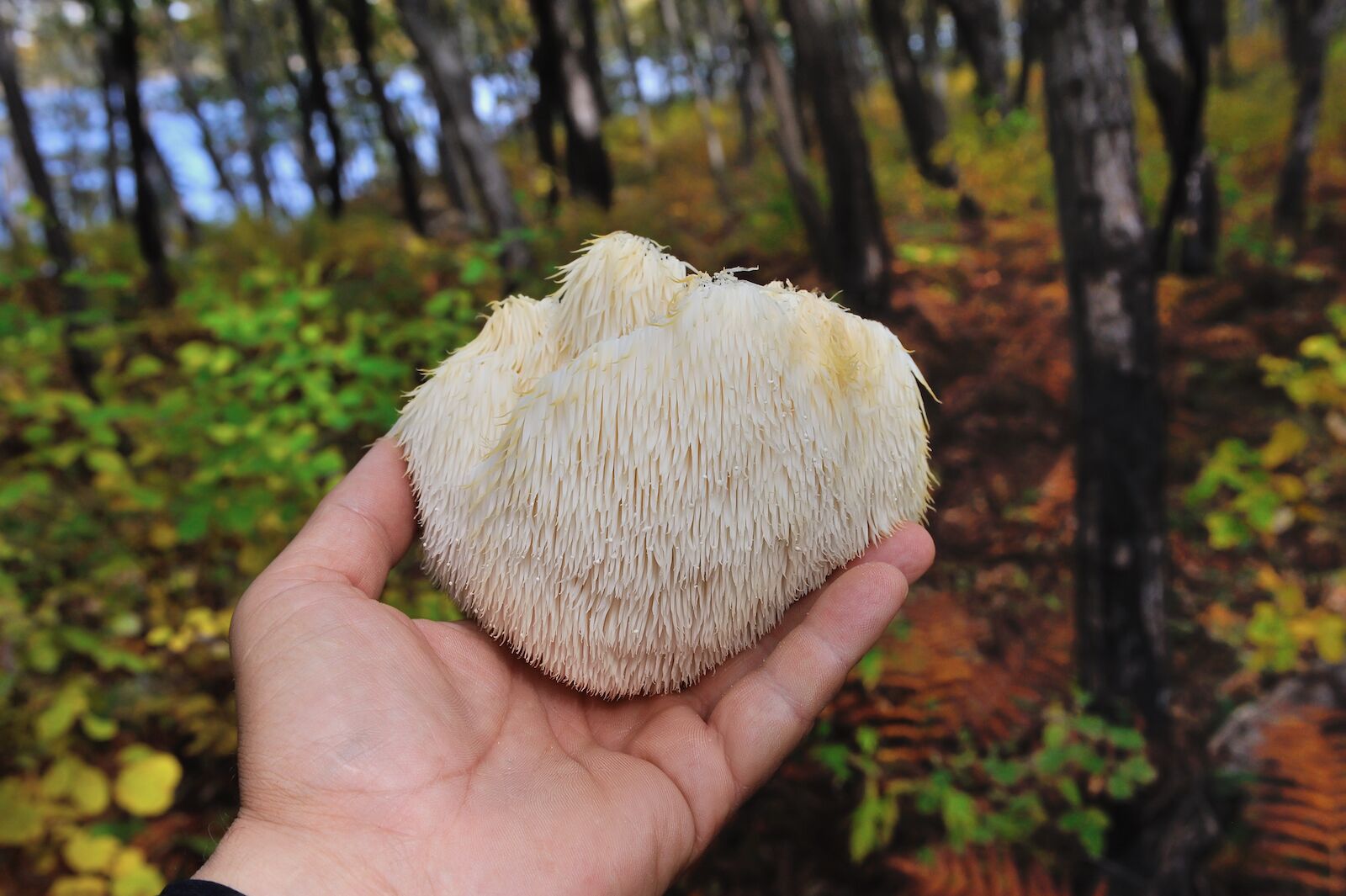 “I think a lot of people have this idea that they are just going to go out in the wild and there’s going be lots of different mushrooms, and they just have to figure out what ones are edible out of all the different kinds that they see,” he says. “But every place that you’re in, for every time of year, there’s a type of mushroom that is edible that you want to get. For instance, it’s August in New Mexico, porcini is the mushroom that is out there, so I’m not I’m not looking for anything else.”

5. Don’t be afraid of nature

“I think that some people, once they start interacting with nature, they feel like they can’t touch it. But don’t worry, nature is abundant. It’s consistently producing more and more,” says Padilla-Brown. “So don’t stress, nature’s forgiving and nature wants you to play around and make mistakes and learn from it. So happy foraging.”

National ParksHow To Hunt for Mushrooms in Oregon’s Coastal Rainforest
Tagged
Food + Drink Outdoor
What did you think of this story?
Meh
Good
Awesome