Nashville, Tennessee, is full of museums dedicated to musical artists and genres — the Country Music Hall of Fame and Museum, the Musicians Hall of Fame and Museum, and the Johnny Cash Museum, are the most famous among them. But Music City could do with one more music-centric cultural institution so, in January 2021, the National Museum of African American Music (NMAAM) opened its doors in Downtown Nashville.

According to Byron Harvey, Guest Services Supervisor at the National Museum of African American Music, “The museum celebrates African American music and its contributions to the American soundtrack.”

Visiting the National Museum of African American Music is like taking a trip through a musical time machine. To make sure you make the most of your visit to this museum, follow our comprehensive guide. 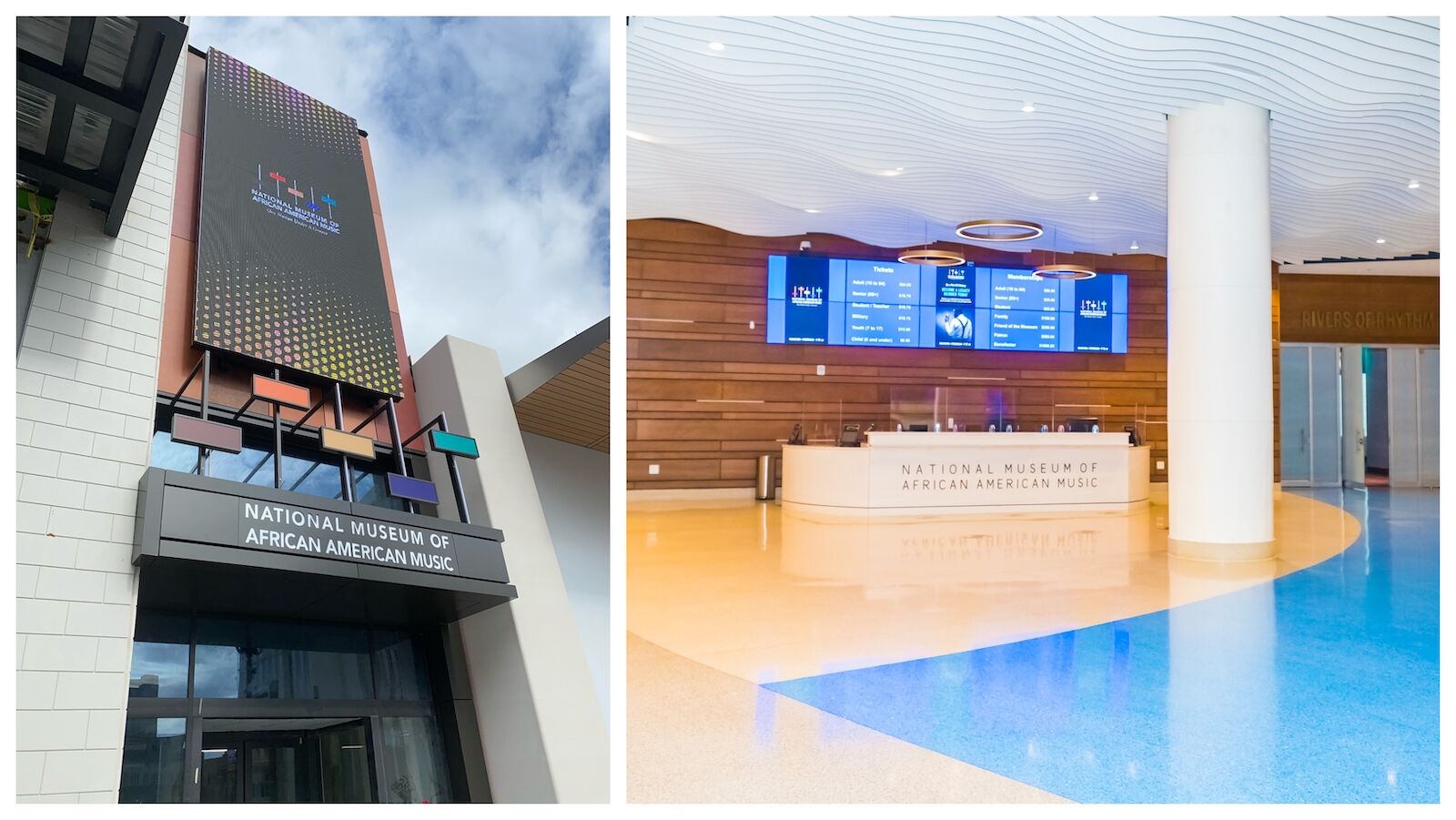 It is best to purchase your tickets online in advance. That said, arrive about 15 minutes before your scheduled time to get your wristband (more on this later on) and enjoy some of the live music in the lobby. Also, self-directed tours of the museum start every half hour and if you arrive late or you’ll have to wait for the next group.

Note that the museum uses timed tickets to manage capacity and ensure each visitor has an opportunity to get the full experience without overcrowding.

Parking at the National Museum of African American Music

There is public parking conveniently available in the garage on Sixth Street and Broadway Street which is located directly behind the museum. If you are driving, it is recommended that you arrive 30 minutes before your scheduled time to give yourself time to park and make your way to the museum.

You will access NMAAM via the Fifth Street and Broadway entrance (also known as Fifth and B by the locals), but before walking in, we encourage museumgoers to take in the sights and sounds of one of the most famous streets in the United States. It is a fitting introduction to what you will experience inside the museum.

Start you visit with the lobby where you can listen to live music in amphitheater-style seating. Take the time to admire the decor of the space, including the wall of instruments, and the light fixtures built to look like drumsticks.

From the lobby, you are also able to visit the beautifully decorated Amplify gift shop. There are records on the walls, record covers on the ceiling, a car cut in half with its trunk open that serves as a display shelf, and more fun decorations. Amplify sells vinyl records, record players, and books, along with clothing and traditional gift shop items.

How long should I plan to visit the National Museum of African American Music? 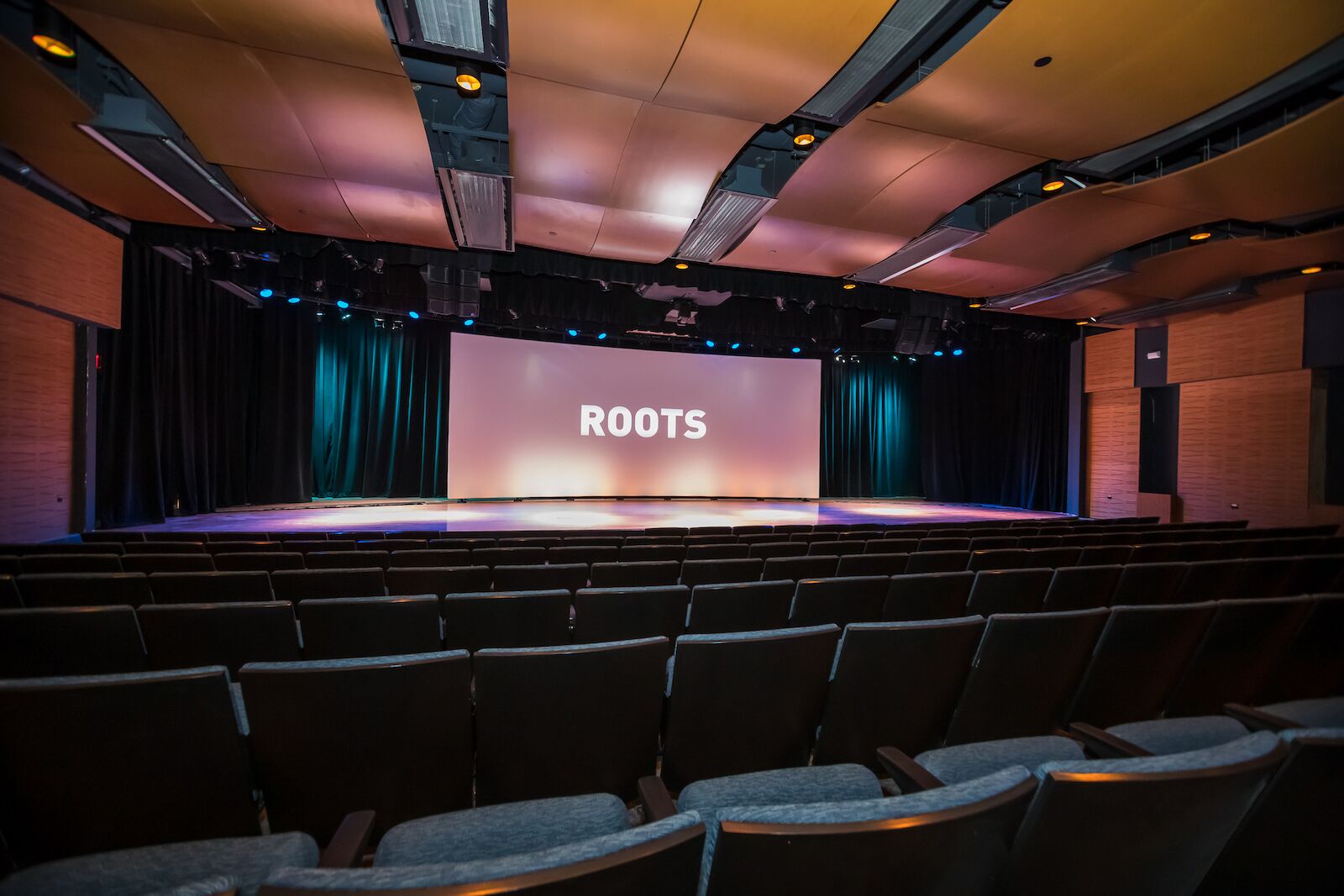 The estimated tour time is 90 minutes, but guests are encouraged to take as much time as they need.

The visit starts inside of the Roots Theater where guests watch a short film on the history of African music and its global influence. Once the film is over, attendees are directed to exit to the right to begin their self-directed tour.

The museum’s exhibits are organized in chronological order starting with the first enslaved Africans being brought to America. Visitor can take in the museum at their own pace through galleries focusing on gospel, blues, jazz, rhythm and blues and lastly hip-hop.

Visitors’ wristbands at the National Museum of African American Music

Upon presenting yourself at the reception desk of the museum, you will be given a wristband. This wristband is linked to the email address that you provided when you purchased your ticket, which will also be confirmed before your tour starts.

The museum staff will instruct you on how to use your wristband if you need help, but it’s straightforward. Your wristband can be used throughout the museum’s exhibits to save part of your museum experience. Just wave the wristband in front of the sensor on the display to save an artist’s playlist or your own prowess as a dancer or singer. Whatever is saved to the wristband, will be available for 60 days after the date of the museum visit.

1. One Nation Under a Groove 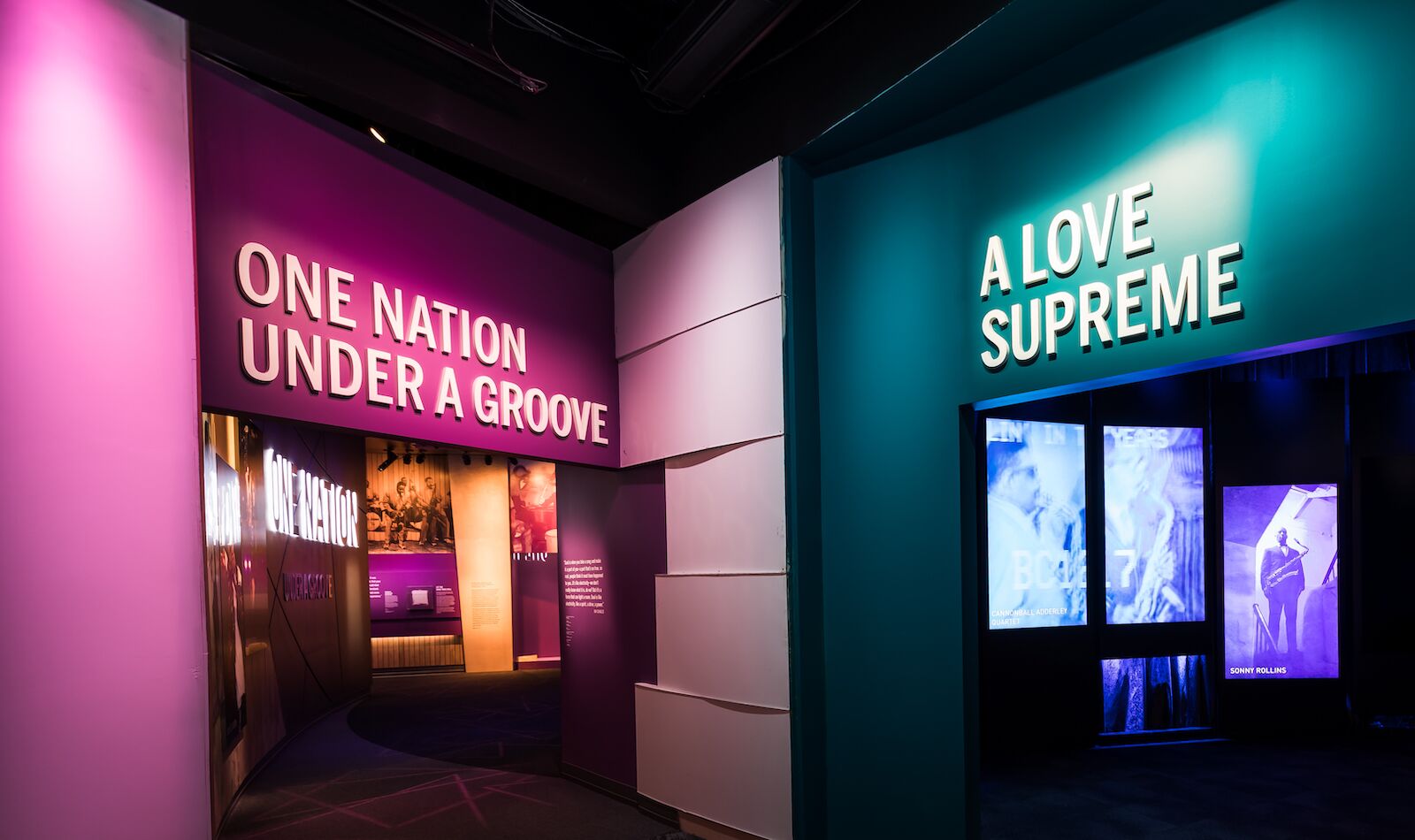 Along with the evolution of music comes the transformation of dancing. In the One Nation Under a Groove gallery you have the opportunity to show off your dance skills to mix education and fun. Alone or with a group, you can go into the large room that resembles a dance studio and give it your all. A silhouette on the large screen in the front of the room will show you the steps. The first song will be from the 1950s, and each song that follows will be from the next decade. The last song to play is “Love On Top” by Beyonce (2010s), and during that tune, your own dancing silhouette will be recorded. You’ll then have the option to save your dance video on your wristband.

Enter the booth, settle under the mood lighting, and record yourself rapping along to a song, karaoke-style. You can go in solo or with a group — either way, you’ll have fun and gain a new appreciation for what hip-hop artists do. You can save your rapping session thanks to your wristband.

One of the coolest activities at the museum is creating a custom music playlist. The Roots & Streams interactive kiosks, found throughout the museum, are fitted with noise-canceling headphones that allow for the opportunity to listen to the music without interruption. The kiosks will have you learn about new artists or rediscover others. You can save the music you enjoyed thanks to your wristband to listen to it again after your visit.

Wade in The Water 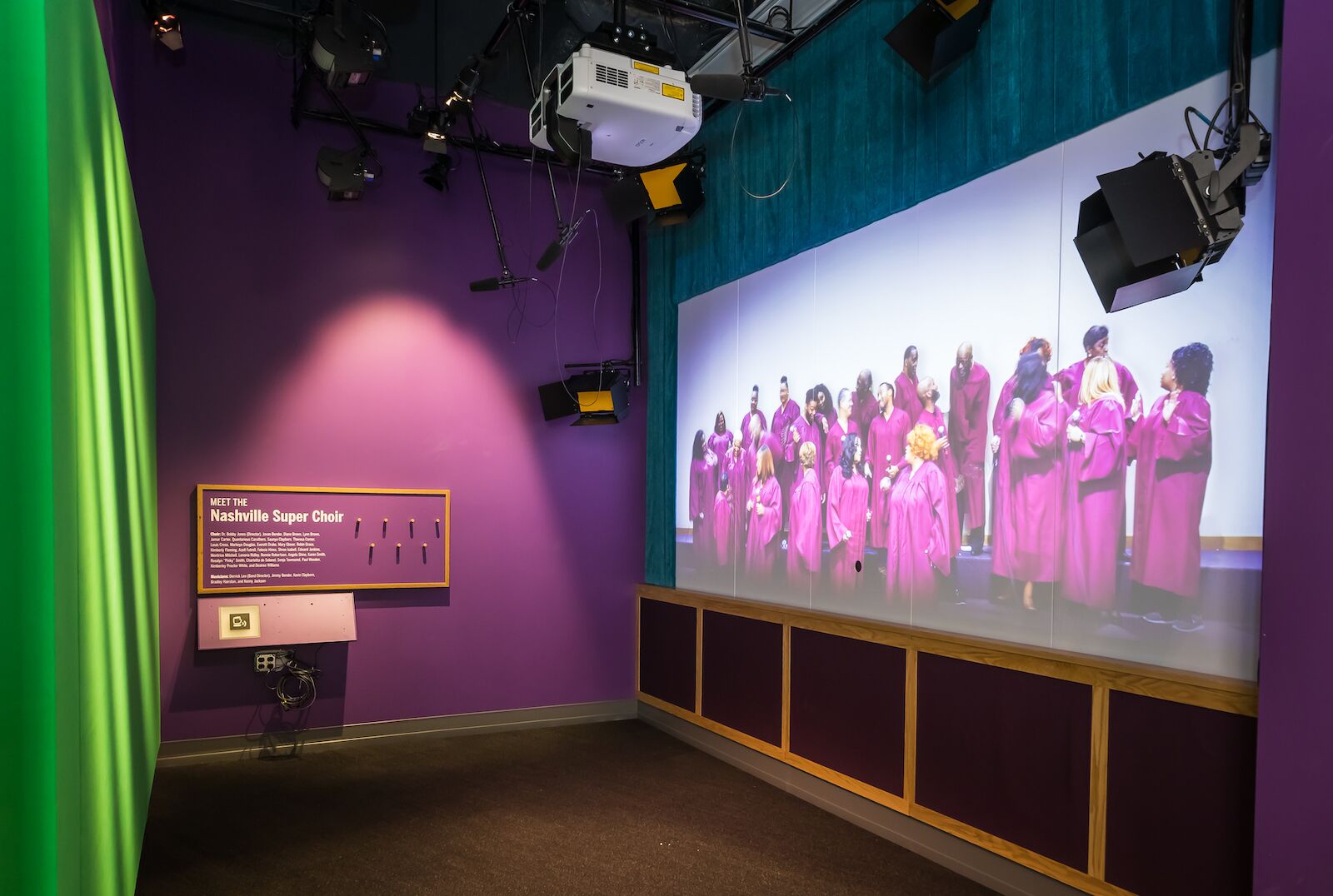 The Wade in The Water gallery is all about gospel, and gospel is the foundation of all the other music genres, and museum exhibits, to come. During slavery, the one place where the enslaved were allowed to gather was church. Enslaved people did not have much hope but religion and their music was critical in their survival. The church was the one place that enslaved and, subsequently, free people of color felt safe. A quote on the museum wall from the great American Gospel singer Mahalia Jackson says, “I sing God’s music because it makes me feel free. It gives me hope.” The gallery has church pews on which you can sit and listen to early gospel music. 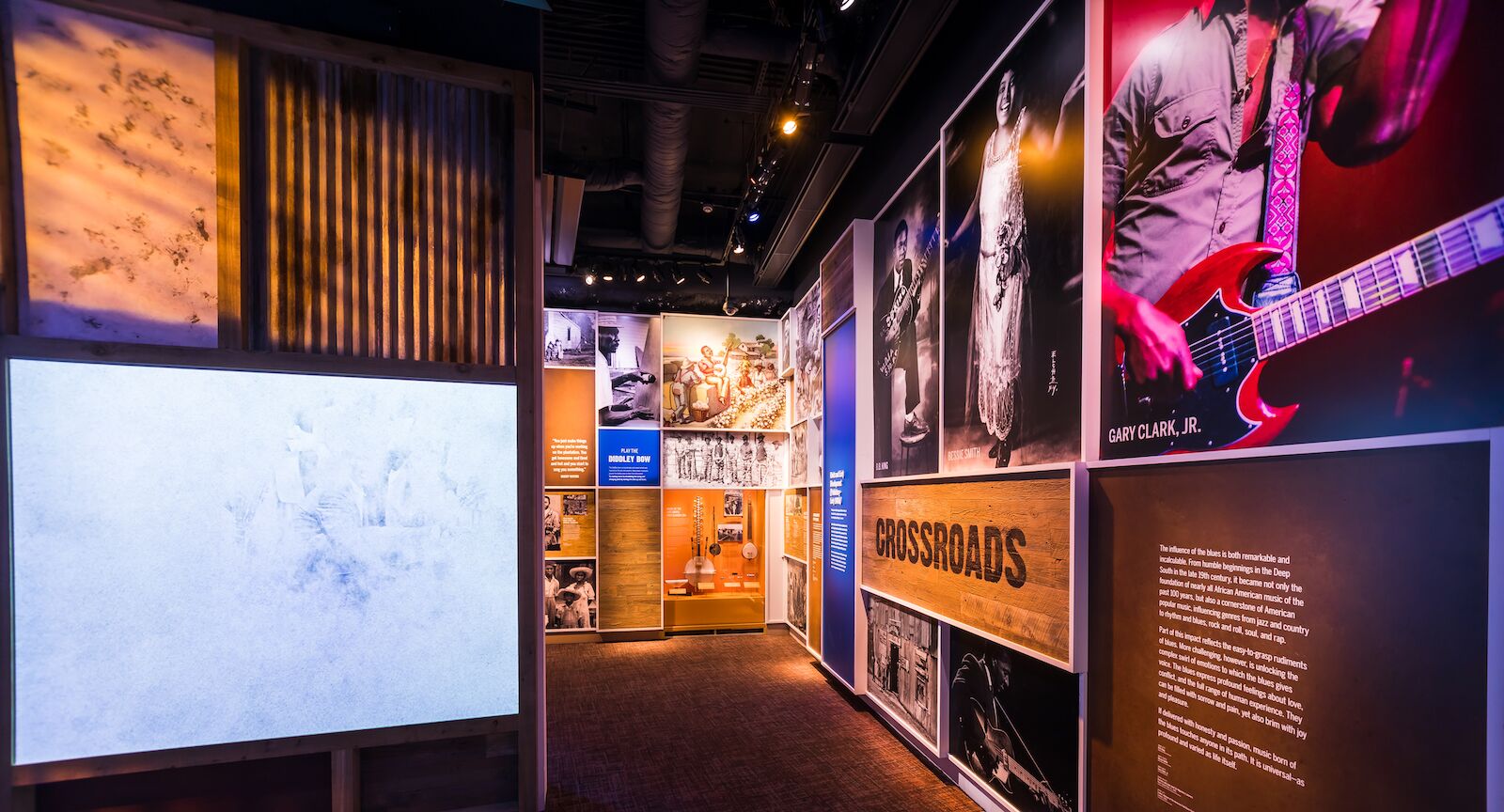 New music began to emerge at the end of the Civil War. The Jim Crow era in the South brought difficult times to the majority of Black people living there. During this time, Black music focused more on personal hopes and needs instead of the collective, as they did during slavery. This is when the blues genre of music was formed. The artifacts on display in the Crossroads gallery are from the late 1800s and post-slavery. They represent the instruments musicians would have played during this time period, such as a 18th-century one-string fiddle made with a gourd body and lizard skin.

Before moving on to the next gallery, try your hands at the diddley bow, another single-stringed instrument. According to the museum, many blues musicians played the diddley bow as their first instrument during this period.

The Love Supreme gallery retraces the story of jazz. The musical genre began in the mid-1700s in New Orleans. There, the enslaved were allowed to gather on Sundays and other holy days to play music, dance, as well as trade and sell goods on Congo Square (located within Louis Armstrong Park.) It is on Congo Square that old and new musical influences merged to give birth to jazz.

New Orleans native and jazz legend Louis Armstrong has a display in this section of the museum. It includes his gold-plated trumpets and a 1931 record by Louis Armstrong and His Orchestra, “Star Dust/Wrap Your Troubles in Dreams.”

One Nation Under A Groove 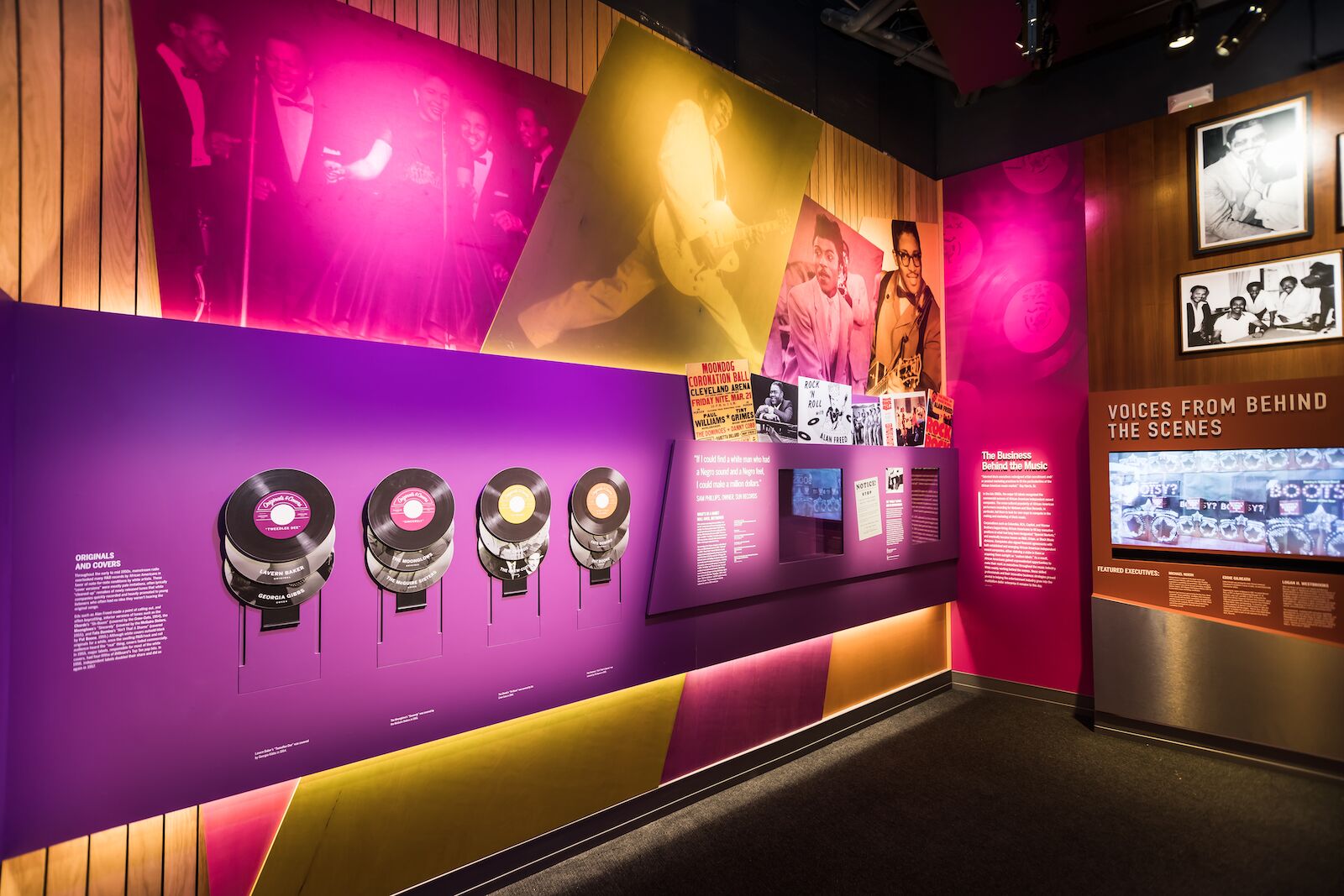 In the early 1950s it was difficult for African American artists to have their music played on mainstream radio. In order for their music to get on the radio, cover versions would be recorded by white artists, unbeknown to the listeners. The Original and Covers display features records, each associated with two photos visible via the pull of a lever; the first photo is of the artist who originally performed the song, and the second photo is the artist who covered it. In order for a person to see both photos, they need to slide the lever down.