For Asian girls, anger is usually an off-limits emotion, at least in pop culture. Asian women are typically depicted as submissive, docile, and demure. But in Netflix’s new show Never Have I Ever, created by Mindy Kaling, Devi is explosive. She sees herself as a hot, smart, powerful teenage girl. But there is so much in her way. It’s not just grief over her father’s death. Her peers have rendered her invisible, too. They don’t invite her to parties or really pay attention to her at all.

Like all teenage girls, she wants to be normal — that loaded term wielded by high schoolers who are struggling to form an identity while also feeling pressured to conform. Devi’s situation is different though: As a first-generation Indian-American girl with brown skin and dark hair, she’ll never be able to embody restrictive (and racist) white beauty standards — and she’s teased for it by her high school rival, a white boy named Ben.

Her upbringing is stricter, too, and influenced by religion. There’s a Hindu altar in her living room (and her mother, Nalini, is livid over the textbook incident because it touched the ground outside after being blessed at the Hindu temple, a huge faux pas). Devi sees how hard her family’s cultural traditions can be on women specifically just by witnessing how Kamala is treated: Her parents have already found a potential husband for Kamala back in India, but she’s instructed to hide her intelligence and ambition in order to secure the match.

Devi is being pulled in many different directions: She prays for her mother to tell her she’s proud of her, yet she also wants to sneak out to parties and get drunk with her crush. All things considered, that sounds like a normal conflict for a teenage girl, one that would weigh heavily on anyone. But Devi isn’t just anyone — she’s a minority in a whitewashed town, already an outsider at a time when feeling excluded is extra tough. 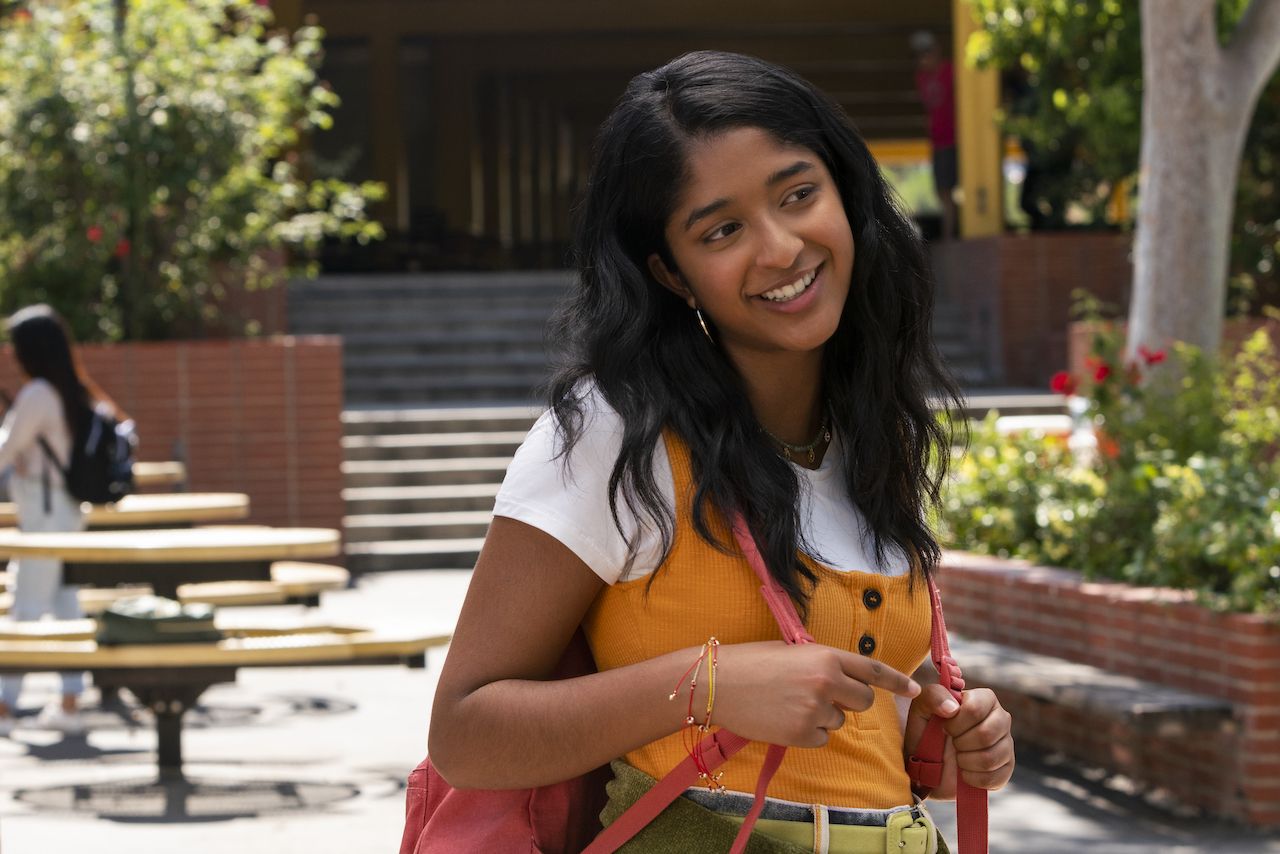 Instead of repressing her unwieldy emotions, Devi sees a therapist who teaches her how to process her feelings, grief in particular. It’s a breath of fresh air to see an Asian woman given space to safely express exactly how she feels. Instead of staying silent and fading into the background with the wallpaper like a well-behaved woman, Devi does the opposite. She learns from her outbursts (including one unfortunate incident involving a Holocaust joke, which she immediately regrets) and the message is clear: Our emotions are not inherently shameful, not even anger. It’s what we do with them that matters.

Devi’s anger issues do culminate in a confrontation with her mother, and the resulting argument is a devastating reflection of the complicated conflicts every mother and daughter must work through. But the climax of the show is also attuned to the challenges Asian women in particular face when they try to express their emotions.

Following their argument, Nalini visits her daughter’s therapist, who quips that she didn’t think she “believed in therapy.”

“I don’t. It’s for white people,” Nalini responds to the dumbfounded therapist, a black woman.

Nalini believes her role is to be the backbone of the family, always strong, never wavering or showing weakness. But she’s grief-stricken too in the aftermath of her husband’s death. It’s just that she’s never felt like she was allowed to express that. Only when she’s able to break down in front of Devi can the two begin to repair their relationship. 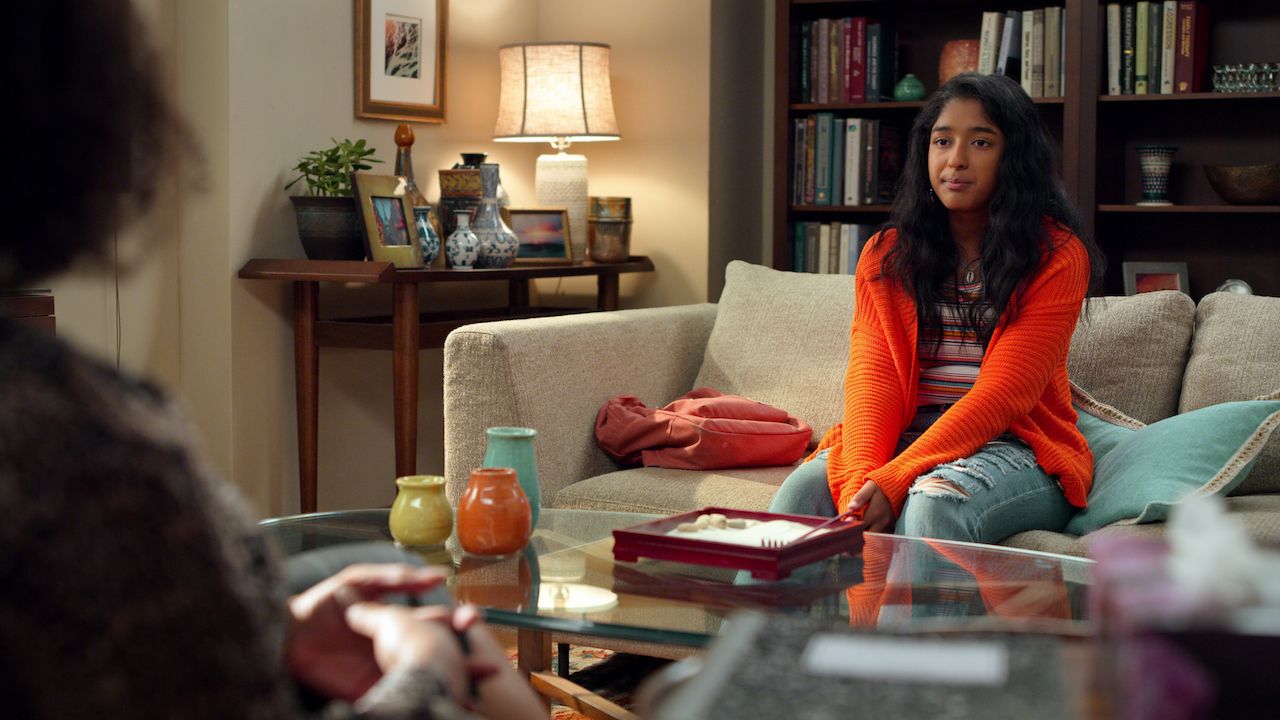 One scene toward the end of the show perfectly encapsulates Devi’s predicament, one that many children of immigrants face: She stands on the beach, saying a prayer in Hindu for her father… while wearing a jean miniskirt, flanked by her mother and cousin, both clad in a traditional sari. Devi is navigating two worlds — one of tradition that requires women to be in control of their emotions and obedient, and another that values autonomy perhaps a little too much. But Devi doesn’t fall neatly into either category, and that is a source of power. She’s a little wild, a little rebellious, but her family is still the most important aspect of her life, her safety net, and the force that will guide how she forms her own value system.

It takes work to unlearn family values, no matter who you are or where your family is from. Devi and her mother put her in that work. It’s gratifying to see two brown women, a mother and daughter, given the same emotional breadth too often only given to “complex” male, and white, television characters. Asian women and girls deserve role models in entertainment that feel deeply and passionately, and develop healthy ways of coping with a full range of emotions.

Never Have I Ever acknowledges a side of Asian women that most depictions ignore — unruly, rebellious, and hot-headed. Devi’s anger might overwhelm her sometimes, but the show doesn’t villainize or shame her for wrestling with complicated emotions. Instead, Never Have I Ever affirms that all our emotions are valid.

TVWhat We Lose When Food Shows Are Celebrity Focused
Tagged
Entertainment TV
What did you think of this story?
Meh
Good
Awesome