Cannabis has come a long way in the US since it was first legalized medically in California in 1996. Now, 18 states have legalized medical and recreational marijuana, 21 have legalized medical marijuana, and Arkansas, Maryland, Missouri, North Dakota and South Dakota have all put recreational marijuana on the ballot for the midterm election season. And with over a third of the country readily available with dispensaries, restaurants, tours, and even churches, a cannabis-themed vacation is far from far-fetched. Still, you might be wondering where to go. A study conducted by Upgraded Points, a company that helps consumers with information on points and miles, conducted a study to find the best cities for a cannabis vacation.

The study found that the most cost-effective places for a cannabis vacation are Oakland, California and Spokane, Washington. Researchers said the data showed a correlation that the longer a state has had legalized recreational cannabis (Wahington tied with Colorado for first in 2012 and California in 2016) had, the lowest prices. A four-day cannabis vacation in Oakland would run you about $1,068, followed by Spokane with $1,135. However, go somewhere where the cost of living is high, and you’ll pay the price. A four-day stay in Anchorage, Alaska, will run you $1,551, with Los Angeles trailing behind at $1,540.

Portland, Maine, turned out to be the second cheapest city due to the vast number of 420-friendly stays. The study found Portland has 102 cannabis-friendly Airbnb listings per 100,000 people. Denver reigns supreme due to its number of 420-friendly accommodations, its 64 licensed dispensaries per 100,000 people, and the average price of a quarter ounce of weed averaging at about $60 if you know the best spots to buy. 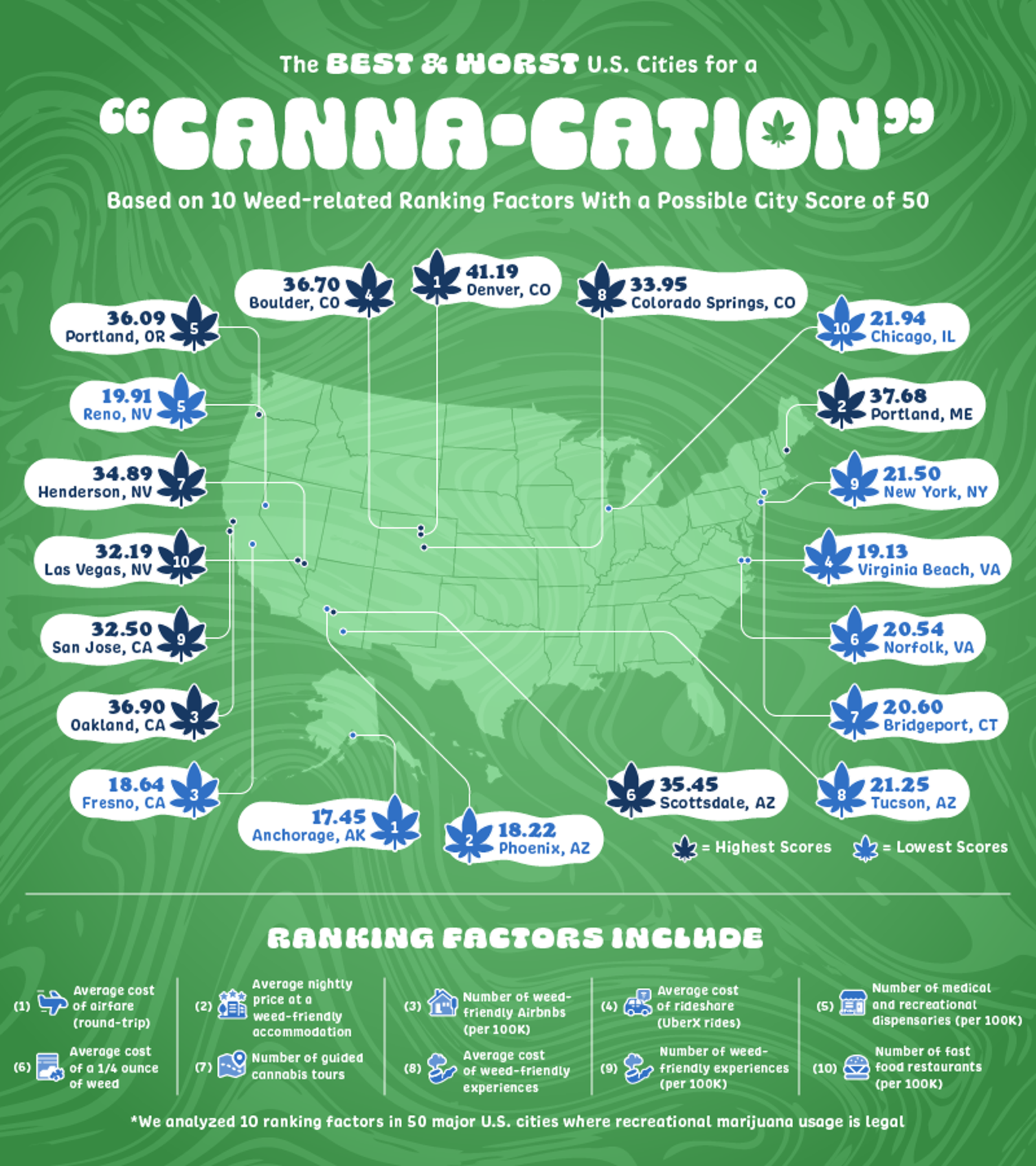 The 10 best cities for a cannabis vacation

To find the best cities for a cannabis vacation, Upgraded points looked at50 of the largest cities in states where recreational marijuana usage is legal. The cities were then ranked on a scale from one to five in 10 categories: average Cost of round trip airfare, the average nightly price at weed-friendly accommodations, number of weed-friendly Airbnbs, the average cost of rideshare, number of dispensaries, the average cost for a quarter-ounce of weed, number of guided cannabis tours, the average price of weed-friendly experiences on Eventbrite, and the number of available fast food restaurants. These scores were then rated according to their impact on cannabis tourism. Each city then received a final score on a scale of one to 50.

If you decide to take that cannabis-themed vacation, just be sure to follow guidelines while flying or on your road trip.

CannabisThe 5 Best Cities in the US for a Cannabis-Inspired Vacation
Tagged
Cannabis
What did you think of this story?
Meh
Good
Awesome