In the Hulu adaptation of Sally Rooney’s smash hit novel Normal People, many confused, ambivalent emotions are at work between the love-struck Marianne and Connell. The pair are on the cusp of adulthood, navigating first love, college, partying, dating, sex, and each other with only a shaky grasp on how, exactly, they feel. It’s a tricky business, trying to figure out who you are and what you want in your early 20s, and their struggle is, as the title of the series suggests, abmismally normal — though hardly boring or devoid of drama. The backdrop for their on-and-off again romantic saga is a landscape just as subtle and beautiful as their love affair: The windswept Irish countryside of Sligo and its counterpart, metropolitan Dublin.

Normal People, the show, has a sort of windswept quality to it, a kind of washed out, almost bleached palette to which Ireland lends itself well. The sun is too bright, and yet it always seems chilly outside. The pale sky, which oscillates between slate gray and faded periwinkle blue (think: an old T-shirt that’s been through the wash too many times), paired with empty, damp beaches gives Sligo an almost desolate feel. It’s a place to escape for Marianne and Connell, not ugly exactly but harsh and severe. The soundtrack to all of this is the constant chirping of birds. It doesn’t lend a cheerful shade to the show. Instead it’s a bit ominous — as though Marianne and Connell’s whole relationship is taking place outside, exposed. 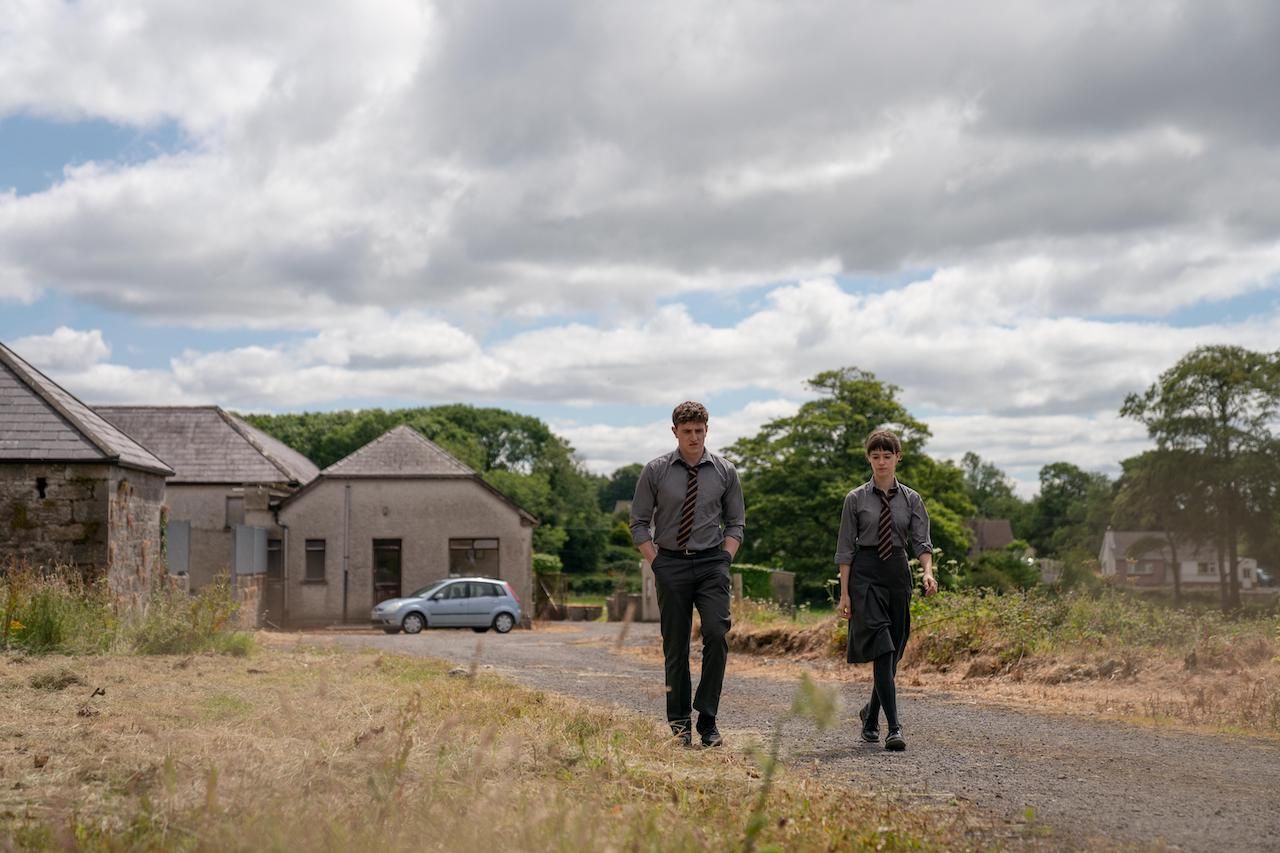 There is something a bit uncomfortable about this setting. It looks hard, not the type of place that is nurturing or kind. The outlook of the show isn’t bleak or despairing, though. Marianne and Connell find each other and fall in love, after all, sometimes treating each other well and sometimes not so much. Against this backdrop which lingers in the mind without overwhelming the characters, their ups and downs feel even more dramatic, as though they are acting out a Victorian romance worthy of Charlotte Brontë.

The stark beauty of Ireland matches the attitude of our protagonists. Marianne can be a touch cold, aloof, and withdrawn — she’s prone to crossing her arms, her mouth fixed in a straight, focused line. She’s tense and fragile. Connell is much more sociable, at first at least, but he has trouble opening up later, afraid to express what he’s feeling. 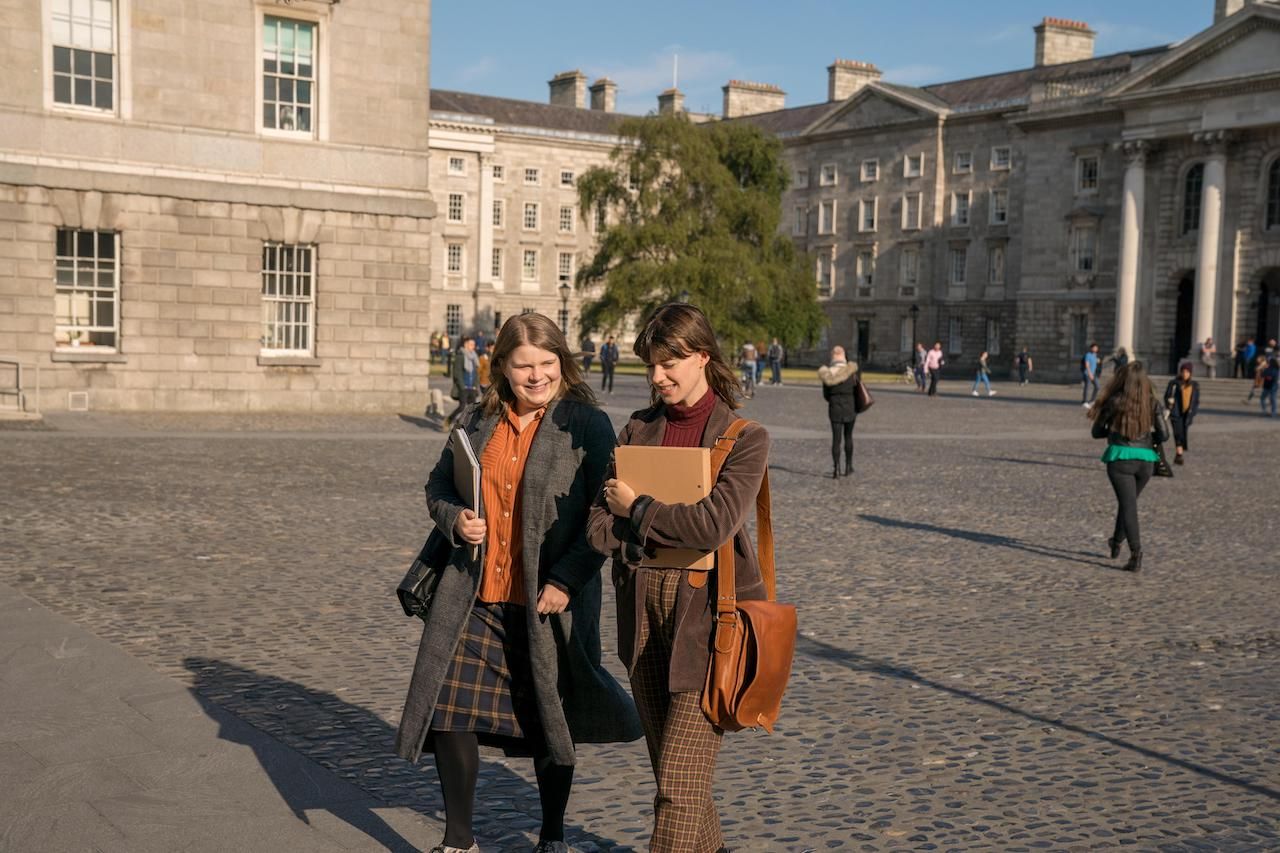 Dublin, where the pair eventually ends up at college, is also cast in gray tones. The harsh concrete structure of the library and the narrow, uneven roads flanked by brick homes wrapped in vines, add to the show’s muted tone. Muted is the operative word here: Marianna and Connell struggle to communicate, usually only finding the right words after they’ve already hurt each other.

Once we get indoors, the scenery grows warmer. The cozy, low-ceilinged pubs are (usually) a refuge for Connell, the bar draped in Christmas lights and the walls plastered with faded pictures of football stars. In his sun-dappled room, Connell studies at a desk in front of huge windows overlooking vibrant green trees, and there’s a glimmer of a hopeful future there, too.

Marianne’s house in Dublin feels similarly comfortable. The living room is decorated with velvet furniture and thick blankets strewn around the room, lamps giving off orange light, heavy curtains hanging from floor to ceiling windows, and candlesticks decorating the mantle above the fireplace. But it all feels precarious and impermanent, especially because Connell in particular shuttles himself between Dublin and Sligo during school breaks to work at a gas station. 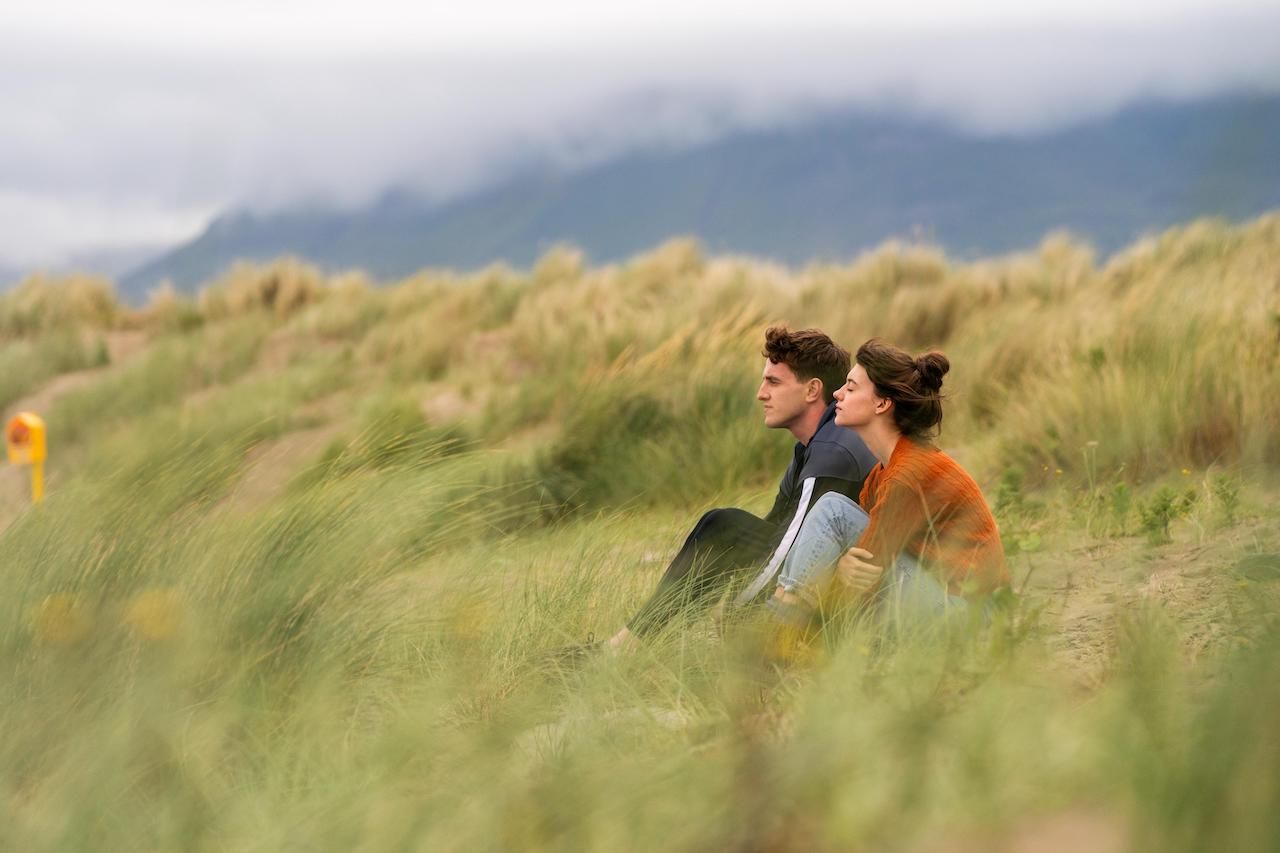 When Marianne and Connell both return home, old patterns in their relationship emerge. They depend on each other, and yet resist being together. The nostalgia of home pushes people together in unpredictable ways. In one scene back in Sligo during their college years, Marianne and Connell are standing on the windswept beach. Everything is gray — the water, sand, sky, and clouds. Wrapped in a sweater, Marianne is telling Connell about arguments incited by her emotionally abusive brother. They brush their bare feet through the icy waves, as Marianne tries to communicate something painful and Connell tries to understand if she’s in pain.

This lonely landscape formed these two lost kids, who are at once longing for connection and love, and afraid of what it might take to find both. And much like Marianne and Connell, on the surface, Ireland might seem uncomplicated, even easy to read. But these gray skies, rolling green hills, and gloomy beaches can be striking despite their austerity. It leaves a mark on you, this place that seems so sparse, but if you look at it the right way, it’s actually quite beautiful.

TVOn ‘Never Have I Ever,’ Angry Asian Girls Find a Voice
Tagged
Entertainment TV
What did you think of this story?
Meh
Good
Awesome