Far above the Arctic circle lies a seldom-visited region of Norway: the island of Senja. Its fjords are so deeply carved from millennia of Atlantic erosion and its interior so incised by receding glaciers that it looks more like stitched together fingers of land than a single island. But that craggy, ice-etched landscape holds impossibly angled peaks, copious lakes, inlets, bays, and stunning, otherworldly views. It packs so much into its 612 square miles that it is often called “Norway in miniature.”

One thing Senja has not so much of is people. As yet unknown to most travelers who seek out the neighboring Lofoten Islands due south, Senja offers so much solitude that you’ll wonder how you arrived there with so little fuss. And whether you go in winter to chase the northern lights or in summer to savor endless sunshine in a majestic landscape, you’ll find an array of ways to take in the vistas and locals ready to help you with that endeavor. Norway has myriad outdoor places to savor its ethos of free air living, and Senja is one of the most remarkable among them. 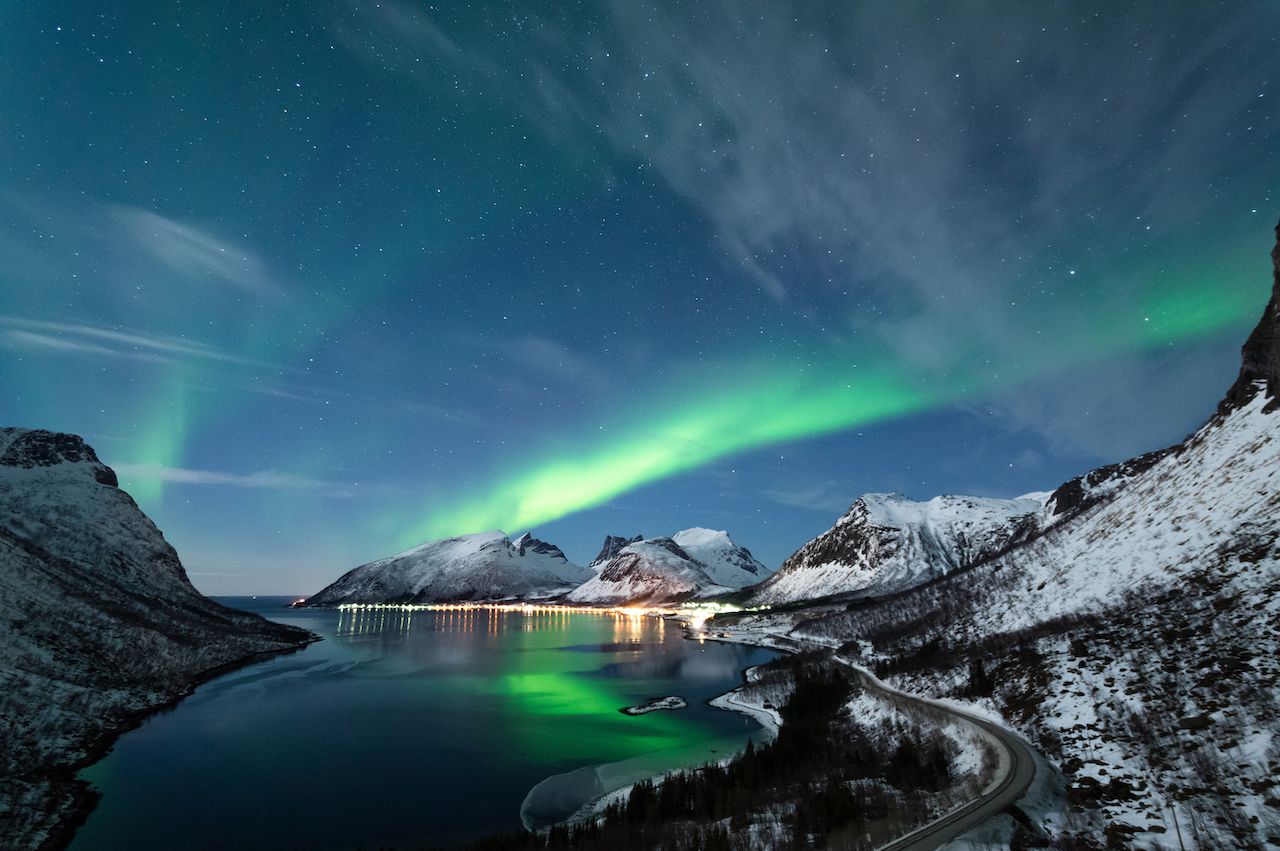 Located over 180 miles north of the Arctic circle, Senja gets its share of dark winter nights during which to seek out the aurora borealis. While no trip to northerly regions is going to guarantee you’ll see the northern lights, you can always try and gauge your chances by looking up an aurora forecast from places like NOAA. The good news for those who are traveling north in the winter for the first time is that the colors in the sky are mesmerizing, even if they aren’t produced by the sun’s ions colliding with Earth’s atmosphere near its polar magnetic field. That’s because, with the sun lying so low to the horizon, and from mid-November to mid-January never cresting it, you end up seeing dazzling sunrise/sunset colors for several hours. When the black sky of early morning gives way to a deep, long-lasting purple as the day ever so slowly brightens, while oranges and reds blaze on the horizon, you will find the daytime sky as worthy of your attention as the illusive evening aurora.

That said, if you want to increase your chances of seeing the northern lights, you could sleep in a glass hut in a place like the Aurora Borealis Observatory hotel. But if you don’t overnight in a glass hut there, or at another hotel, don’t worry. At whatever accommodations you stay, the front desk is likely to have a list of rooms to call should the northern lights make their dazzling appearance; just make sure your name is on that list.

Getting out on the snow 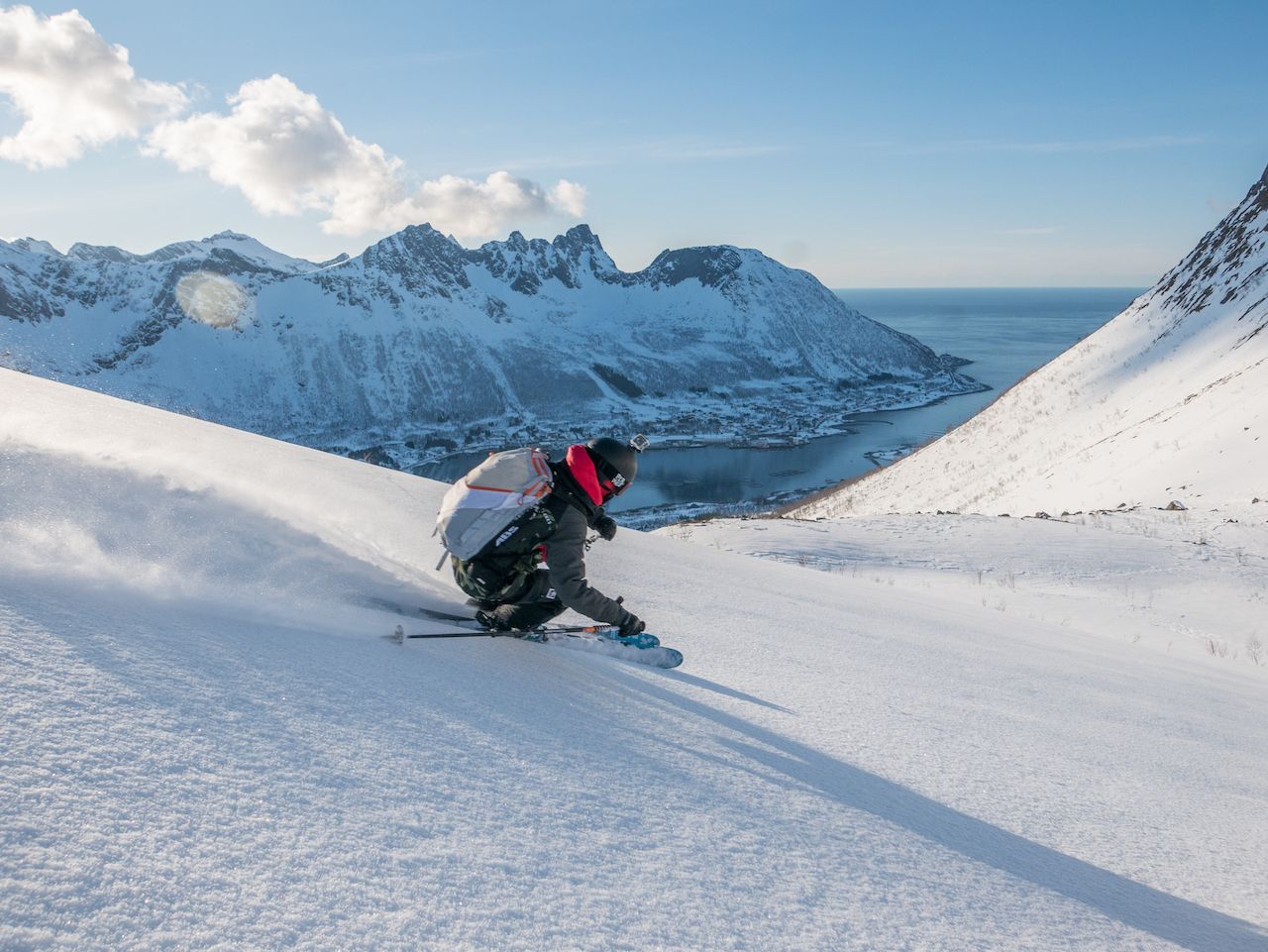 You won’t find a single chairlift or gondola in Senja, but the skiing is spectacular. Fresh, untracked powder bedecks 3,000-foot peaks that soar right up from the Atlantic Ocean. Because of the fierce winter’s darkness, the ski season actually starts in February and can run as late as May. While plenty of multi-day ski expeditions can be organized by alpine guides who will also be flying into the area, you might prefer to hire a local guide for a single day of ski touring through a place like Hamn i Senja resort. The price is about 4500 NOK ($525) for one guide who can take between two and six people.

If snowshoeing is more your speed, it’s likely your winter accommodations will be able to source you a pair of snowshoes and indicate a wonderful, view-filled route. If you’re up for a guided tour, through the Hamn i Senja resort you can join easy or moderately challenging tours as early in the winter as December. 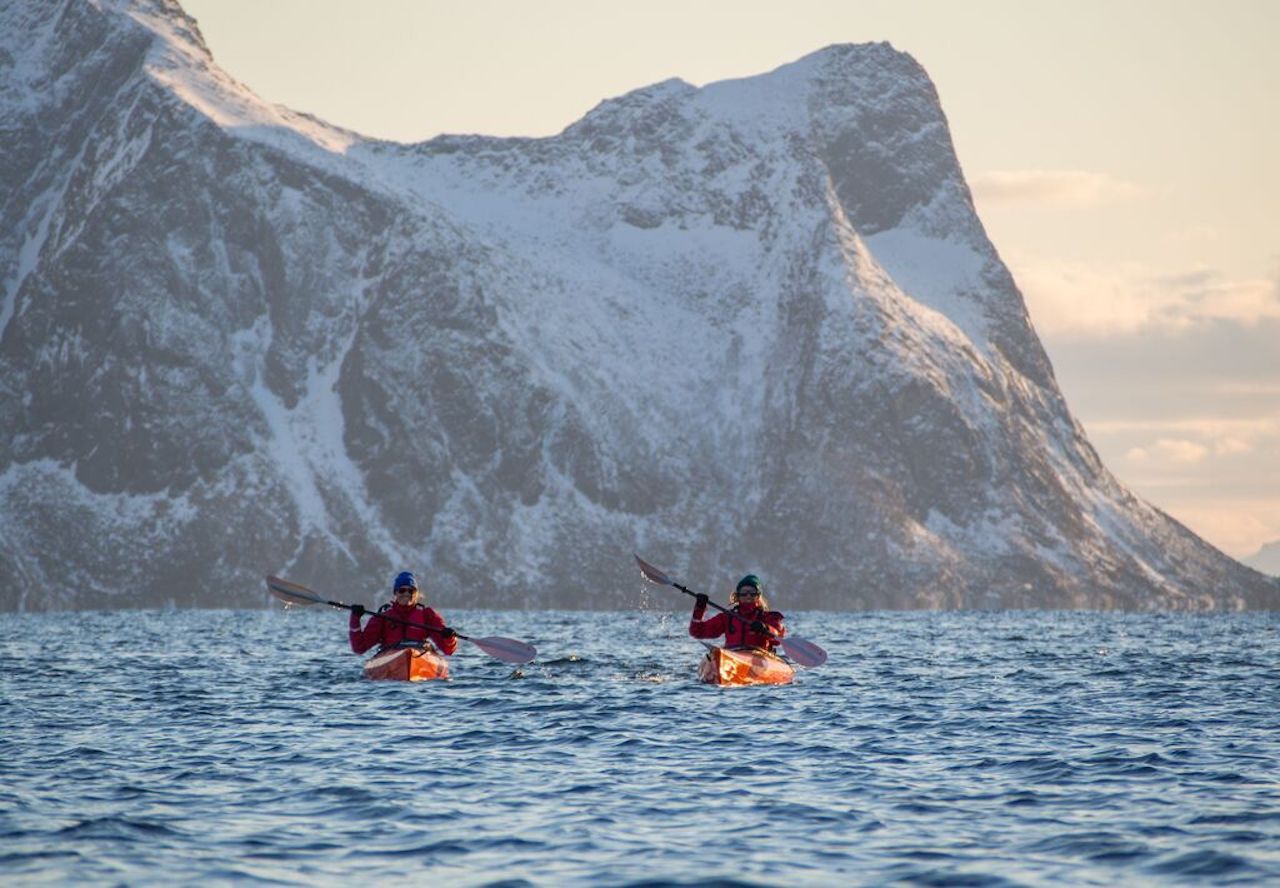 With so many fjords and lakes, water is everywhere you look in Senja, and the best way to get up close to it is in a kayak. Until just a few years ago, you had to rent your kayak in Tromso, but now you can reserve one for the day through the Hamn i Senja resort for 500 NOK ($58) or 800 NOK ($93) for a tandem one. Note that the resort calls paddling from February to April “winter kayaking,” so come prepared with warm attire. While the resort can arrange a guide for you if needed during the so-called “winter” months of spring, they have regular guided kayaking trips in the summer months that depart at 10 AM and midnight sun trips that depart at 10:30 PM. Note that the sun doesn’t set from mid-May to mid-July.

You can also explore the ocean, searching for seabirds and seals, on a boat tour. In the chillier months, ice fishing is also possible. Once the weather warms up, though, you may prefer to explore the quiet ocean inlets on a paddleboard, which can be rented from places like the Senja Arctic Lodge for 200 NOK ($24) for two hours. 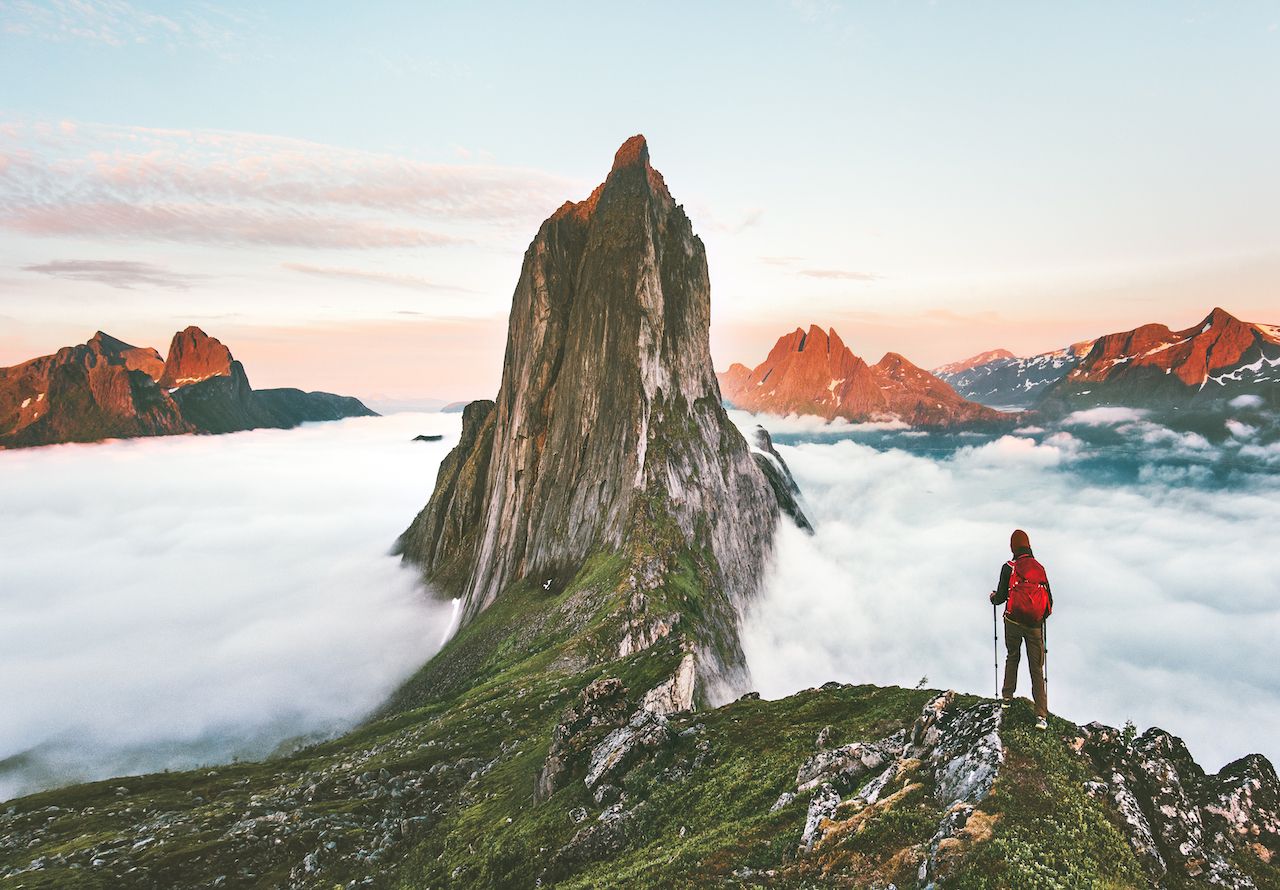 If nothing else, Senja’s neighbor islands to the south, the Lofotens, are known as an incredible summer hiking destination. Senja holds the same striking topography, with even moderate hikes like the 2.5-mile round-trip hike to the top of Sukkertoppen, which means sugar top, 1,500 feet up, offering breathtaking views nearly the whole way. Senja’s most famous hike summits Segla mountain; the demanding 2.5-mile round-trip takes you up nearly 2,000 vertical feet to a panoramic overlook.

The best time to plan hikes is after the month of July, as trails will likely be free of snow by then — and through September. Come late September, the weather may be less predictable. And given that so many of Senja’s hikes are on steep trails with sharp drop-offs, it’s critical to only hike with clear and dry weather. You need to be able to see the trails clearly and not find yourself on a slippery rock face during wet conditions. 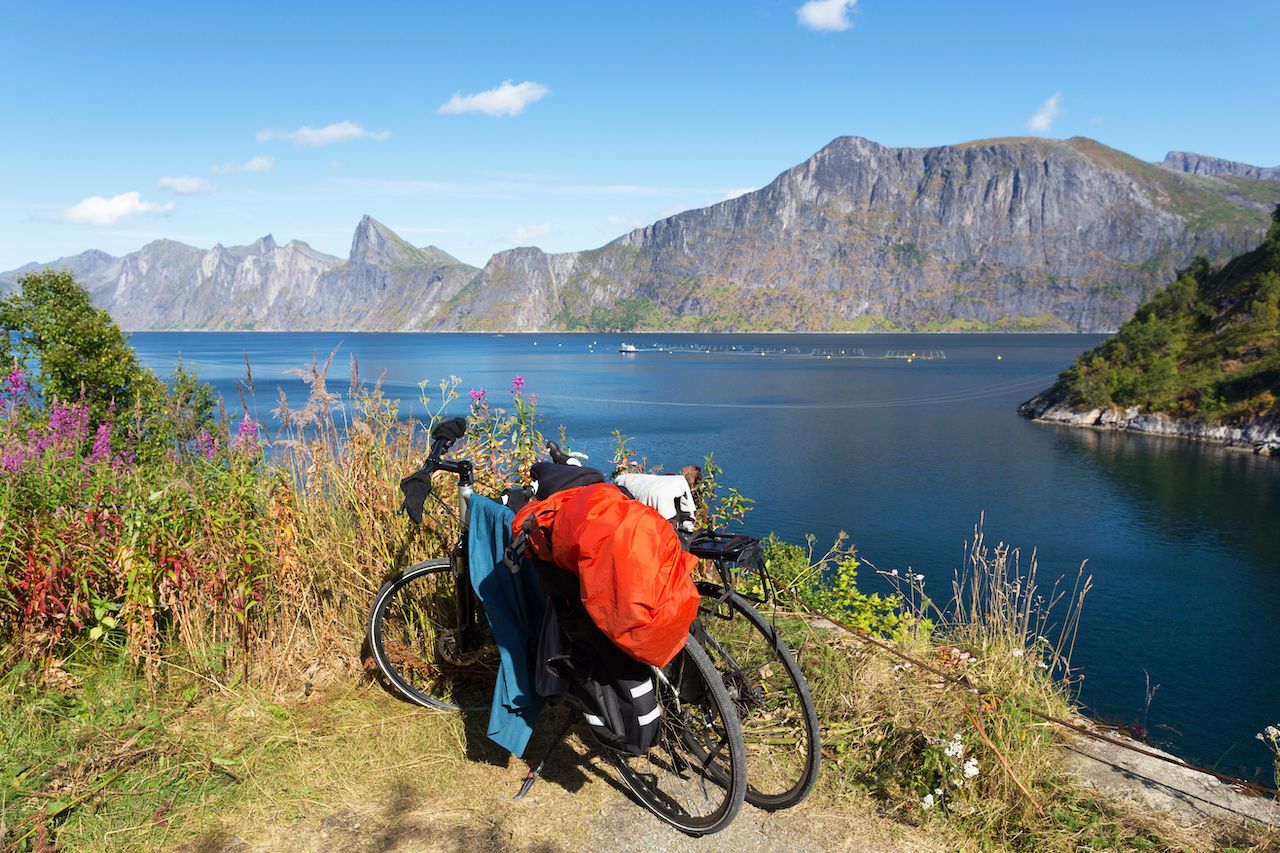 While less known for outsiders, cyclists from within Norway are increasingly drawn to the dramatic vistas, and hills, of Senja’s westerly side. They may cycle the portion of Norway’s National Scenic Route, which runs through Senja, but note that this one is full of thigh-busting ascents. If you aren’t planning a serious road-biking journey, you can also explore on a more relaxed touring bike rented through Hamn i Senja or, often, organized through your accommodations. 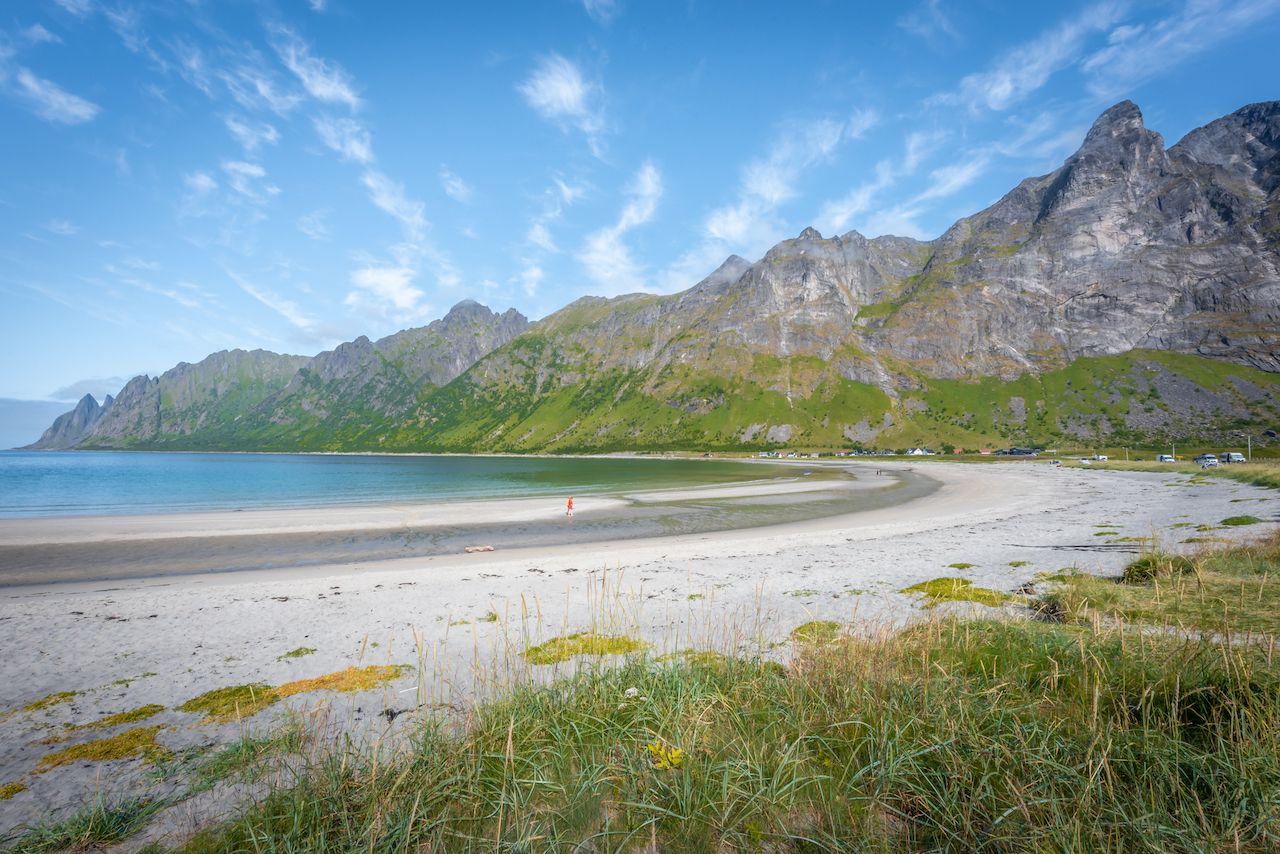 While Senja is idyllic for adventure lovers, it can also be a serene nature escape for those who wish it. While you may not choose to take a dip in the water by the beach, its aquamarine hue by the shore — one which seems more fitting somewhere closer to the equator — will nonetheless surprise you. In fact, Senja’s beaches are an excellent place for a summer amble, as is the wooden path that winds over the rocky coastline near Tungeneset. Some hotels offer hot tubs to linger in during the midnight sun or, in winter, cozy blankets to get under and peer out the north-facing windows in search of those iridescent northern lights.

CultureThe Ultimate Viking Tour Through Norway
Tagged
Beaches and Islands National Parks Norway
What did you think of this story?
Meh
Good
Awesome