Thanks in part to Cheryl Strayed’s massively popular book Wild — and the subsequent film starring Reese Witherspoon based on it — the Pacific Crest Trail has gone from a backpacker bucket-list goal to an experiential, existential must. The PCT, as the cool kids call it, runs 2,633 miles between the US borders with Mexico and Canada, crossing the lengths of California, Oregon, and Washington.

Each year, 300 hikers start off on the difficult, months-long journey through beautiful, if physically and mentally exhausting, terrain. Just over half of those who begin actually complete it (you can read first hand tips for hiking PCT here). If you’re not ready to spend up to five months on foot but still want the challenge, a shorter trip on one of the many of the local loop trails that surround the PCT is an option. Check out the latest from the Pacific Crest Trail Association and consider these sections of the PCT, which we think are the prettiest ones you can tackle this fall. 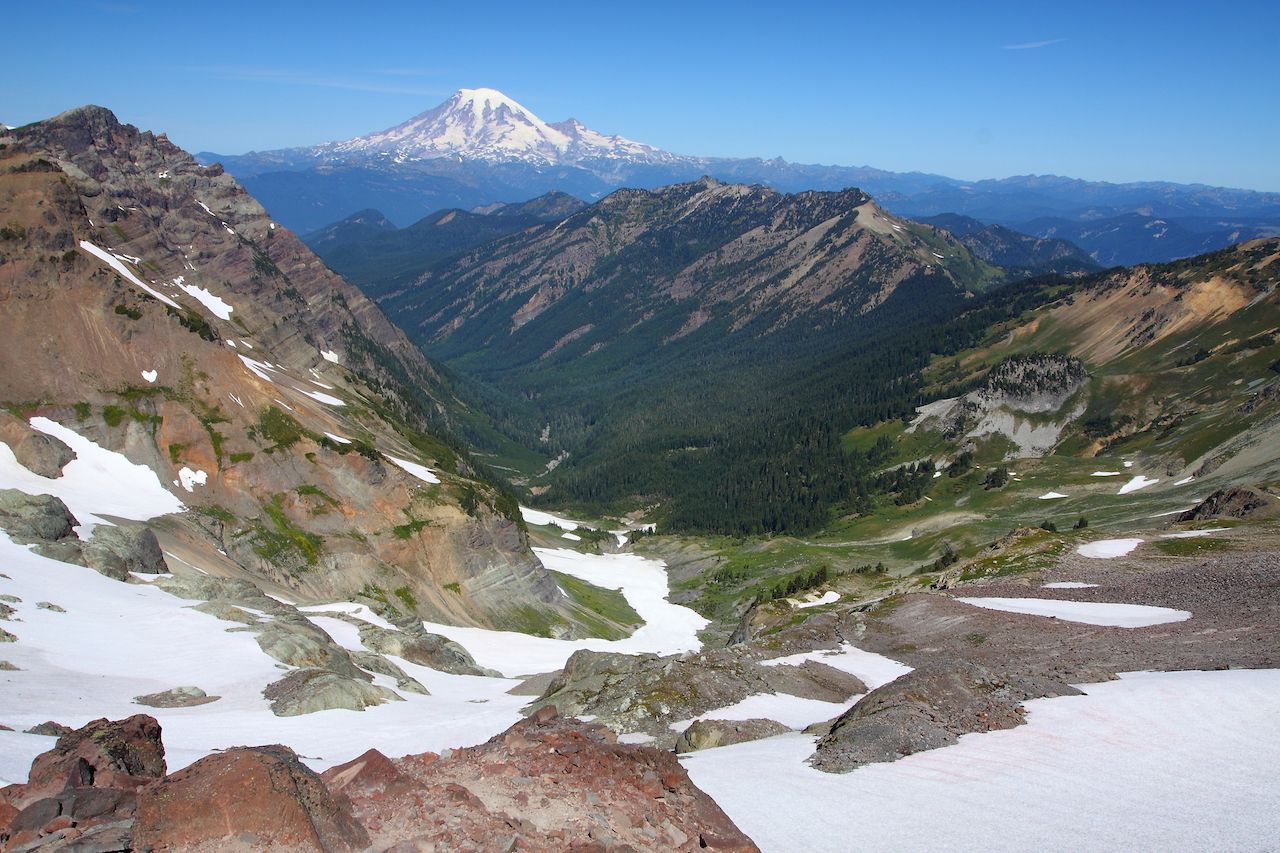 Section H of the Pacific Crest Trail runs 147.5 miles from the Bridge of the Gods in the Columbia River Gorge, at the border of Oregon and Washington states, to White Pass near Mount Rainier in central Washington. This portion of the trail skirts the base of Mount Adams and ambles across Goat Rocks Wilderness, ending just south of the crown jewel of the Cascades — 14,411-foot Mount Rainier. Any point along this trail is a good one for planning a shorter hike as loops are accessible from the many forest roads.

Snowgrass Flats is one of the more popular sections of the Pacific Crest Trail as it provides access to Goat Rocks, which many call the most scenic spot of the PCT. The Snowgrass Flats trailhead is a three-hour drive from either Seattle or Portland. 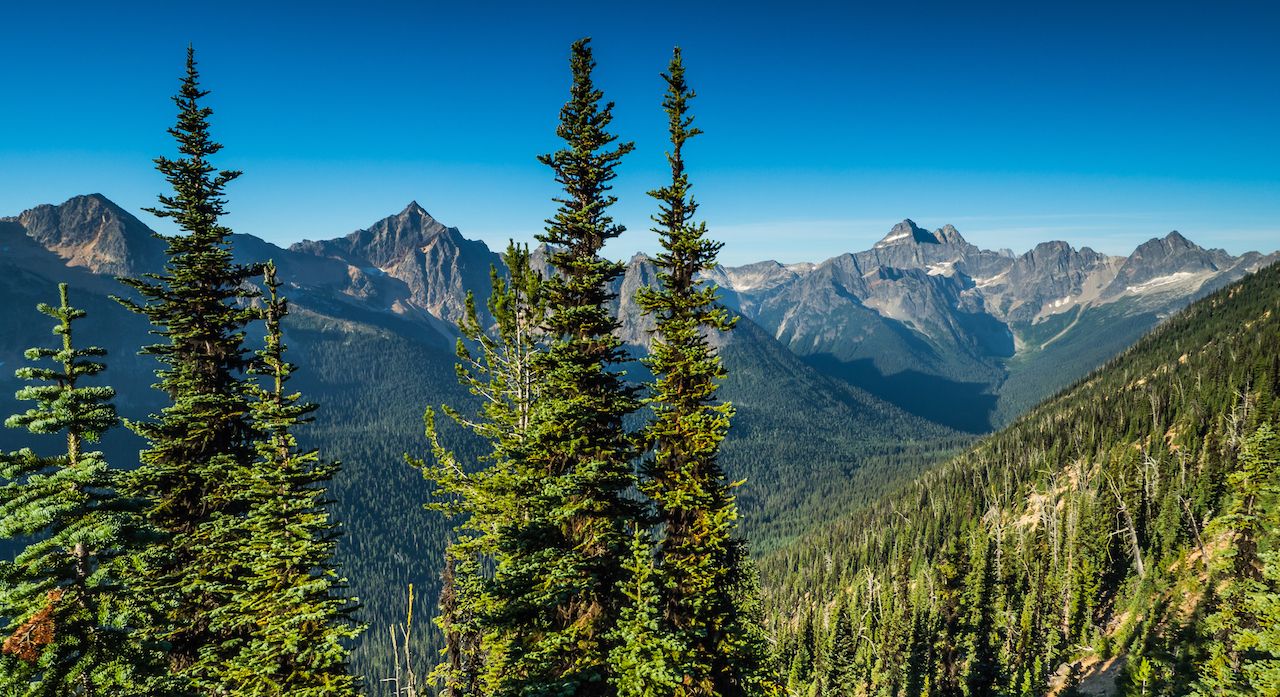 For hikers doing the whole PCT, this section marks the tail end of their journey. It’s considered one of the most visually spectacular portions of the PCT, thanks to the craggy peaks and deep valleys of the North Cascades. Here, the forested green hills of the central Cascades give way to a more extreme landscape. While there are plenty of popular, and heavily traveled, loop hikes from Snoqualmie Pass north, this is a great spot to try a through hike on the PCT itself.

If you can arrange for someone to pick you up — it’s not a long drive from Seattle — consider Hart’s Pass to Rainy Pass, a 30-mile bite of the PCT. If you have more time, section J of the PCT, which runs from Snoqualmie Pass to Stevens Pass, is a challenging 75-mile stretch with over 16,000 feet in elevation gain. However, you will likely see other hikers on this trail as you pass lakes and craggy peaks, so it’s a relatively safe bet if you’re planning your first multi-day foray onto the PCT. 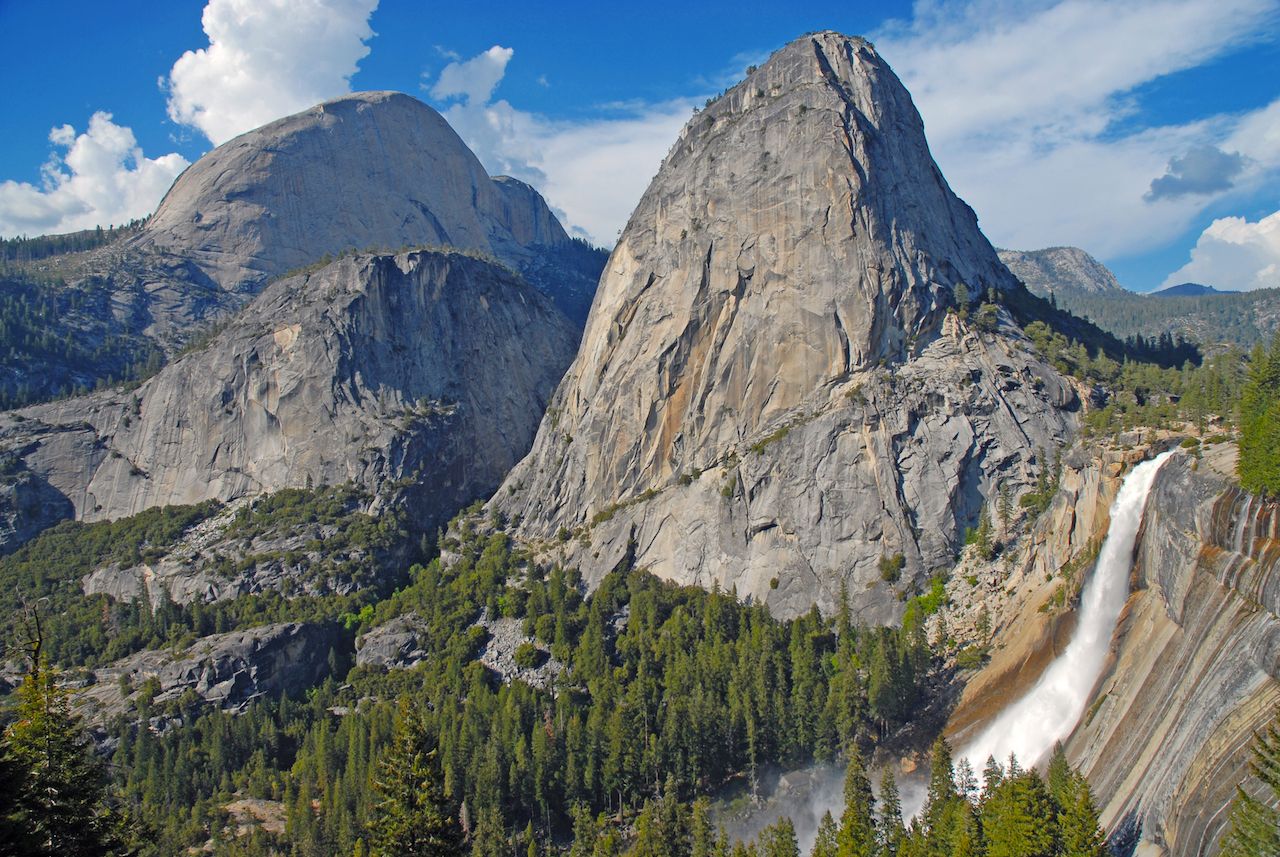 The John Muir Trail is perhaps the most famous subsection of the PCT, stretching 221 scenic miles through Yosemite, Kings Canyon, and Sequoia National Parks to Mount Whitney. Most hikers budget three weeks for this undertaking, but if you’re on a tighter timeline, consider Rae Lakes Loop for a weekend trip or the Tuolumne Meadows to Devils Postpile Loop for five to six days. The fall is a good time to do Rae Lakes Loop as wilderness permits for it can fill up in summer. Just note that you reach an elevation of nearly 12,000 feet at Glen Pass, so the earlier in the fall, the better.

Sonora Pass is a popular day hike, at just under nine miles, and is easily accessible from both Reno and the Bay Area. It’s the second-highest pass in the Sierra Nevada at 9,624 feet and has stunning alpine lakes, meadows, and a wide variety of wildlife. 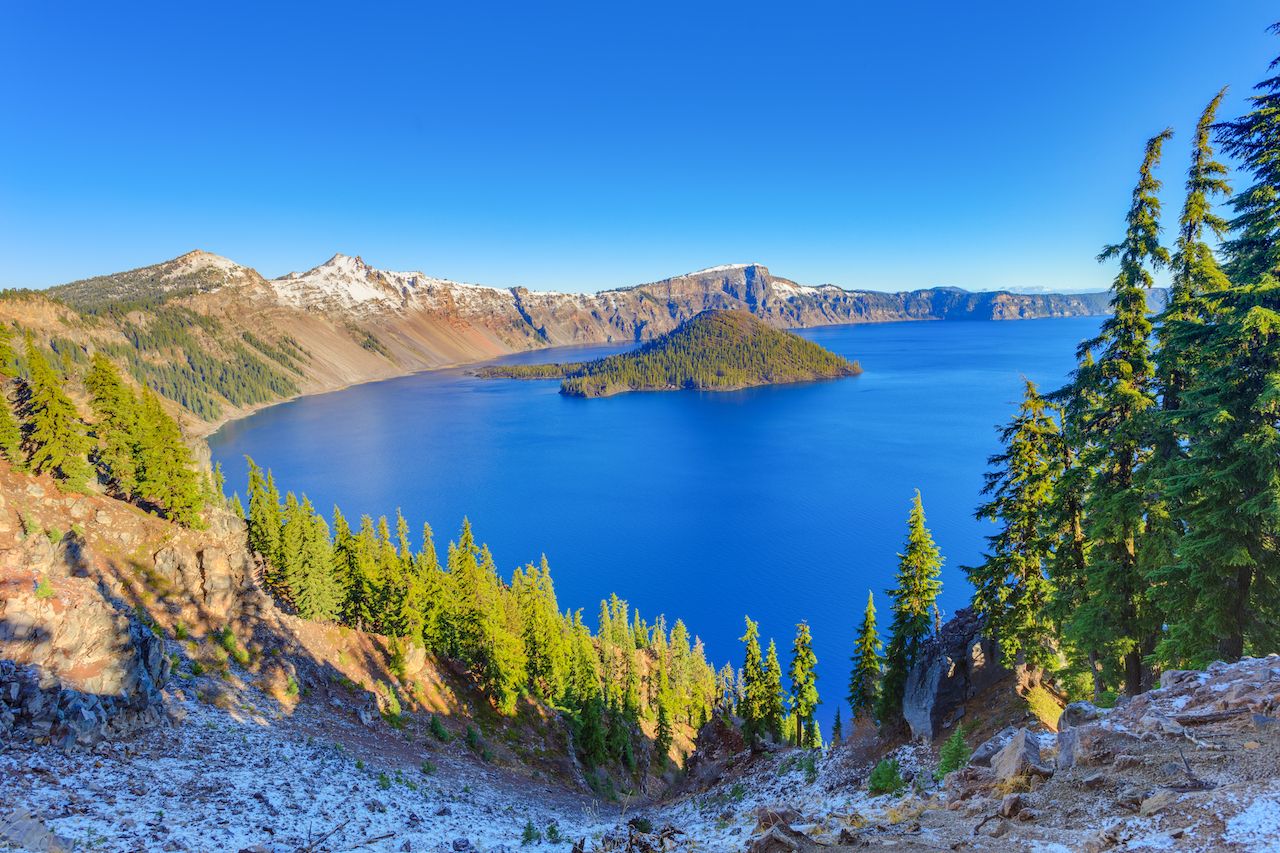 Nearly 29 miles of the PCT cut through this area dotted with glacial lakes and stunning views of the Cascades, from Mount Hood to Mount McLoughlin. It’s located just south of Crater Lake and is a popular hiking spot for families, locals, and those just passing through. You can reach it off Highway 140; it’s less than two hours from the southern Oregon cities of Medford or Ashland.

You can also spur off the main PCT trail to make for even more beautiful views. Among the most popular hikes here is the 8.5-mile round-trip hike to the summit of Mt. McLoughlin. Those wanting the best of both worlds — the PCT and Crater Lake — can use the PCT Alternate South and PCT Alternate North trails for beautiful views of the lake from its west rim. 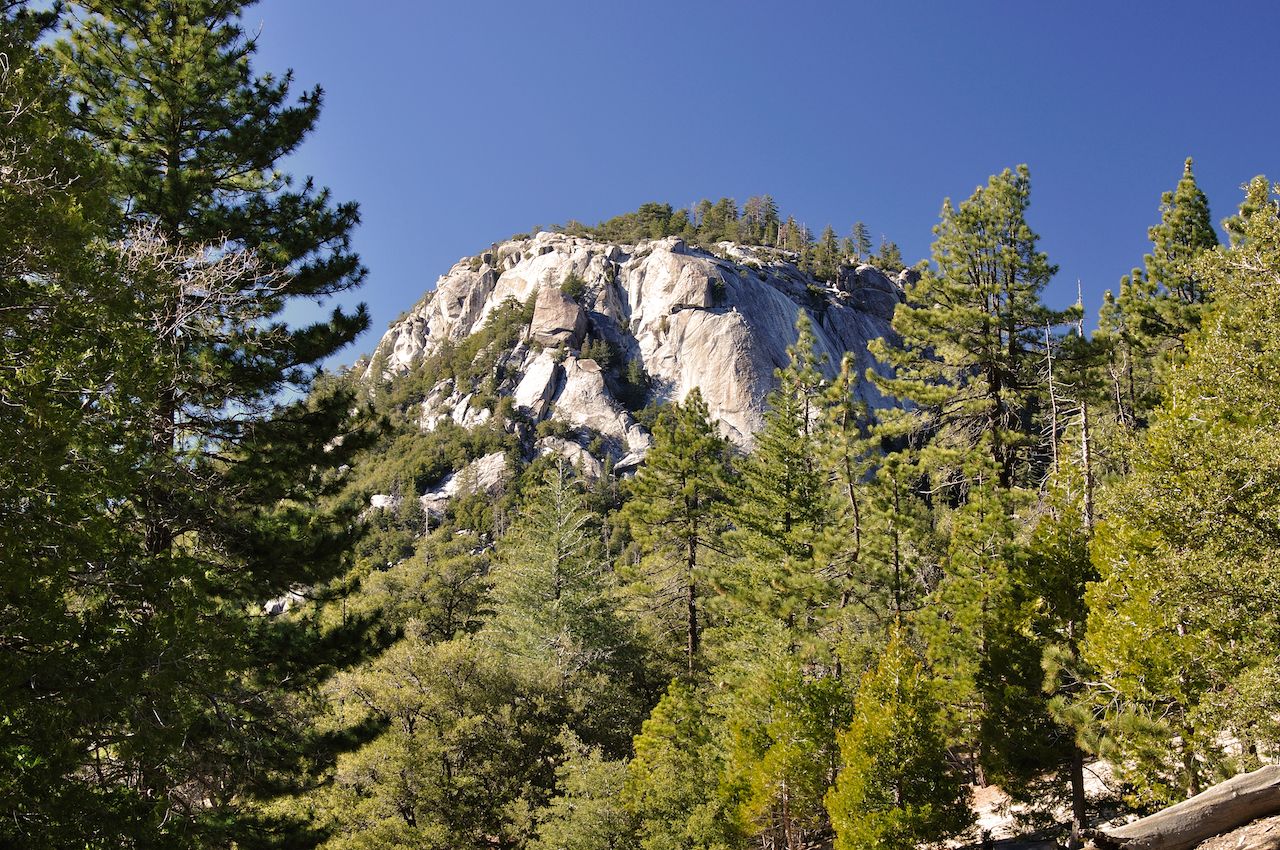 The desert portion of the PCT is not highly rated for its beauty. Other close by spots, like Joshua Tree, have more captivating desert landscapes. But if you want to hike a portion of the PCT and SoCal is your only option — or it’s later in the fall and the weather is getting too frosty up north — this is one of the prettiest spots. Hiking to peak of Mount San Jacinto from Idyllwild, where you’ll also find campgrounds, is the most popular route.

The state park has reopened since the summer fires, but check its Facebook page for the latest information. You can pick up day-use wilderness permits in Idyllwild, but you’ll apply at least 10 days in advance for overnight permits. It’s under 20 miles to the top, and the round trip, which includes a portion of the PCT, can be done in a few days. With unforgettable views from the top — desert on one side and forest on the other — it’s perfect for a long weekend. Just note that Mount San Jacinto reaches 10,834 feet, so even in Southern California, it can get chilly up there.

I Hike at Least 500 Miles a Year and These Are the Boots I Wear the Most
25 Must-Know Pieces of Hiking Advice for Beginners
The World’s Best Urban Hiking Trails Inside City Limits
I’ll Say It: New Hampshire Hiking Is Just as Good as Hiking in the Colorado Rockies
8 Waterfalls Near Seattle To See The True Beauty of the Pacific Northwest