No matter the season, Park Hyatt Beaver Creek Resort and Spa’s five-story, European-inspired facade acts as an asymmetrically-designed finish line for those descending from the 11,440-foot summit of Beaver Creek Mountain. It’s a cozy alpine hacienda that lures hardy mountain adventurers and vacationing families alike. The best time to come, however, is when you’ll find neither.

We hope you love the Park Hyatt Beaver Creek! Just so you know, Matador may collect a small commission from the links on this page if you decide to book a stay. Listed prices are accurate as of the time of publication.

An off-season hub for “Multi-sport May” 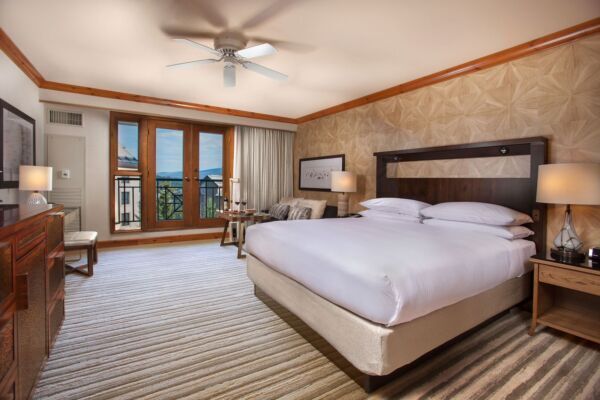 The Park Hyatt’s reputation as Beaver Creek’s most convenient conglomeration of luxury hotel and ski lodge is no secret. If a snowball fight breaks out in the Vail Valley, this is the best place to find yourself. No slingshot is required to lob a lump of fresh powder at giggling attackers approaching from the base of the ski resort’s Haymeadow Express Gondola, nor if they approached from the Centennial Express lift due west. Indeed, you could be sipping a Baileys-spiced hot cocoa near the firepit outside Brass Bear Bar and, with a slight sidestep, have easy aim nearly anywhere in upper Beaver Creek Village.

What’s less discussed is what happens here once the lifts stop turning. The period from mid-April until the start of the summer tourist season in mid-June is affectionately known as “shoulder season” among Colorado locals. Snowmelt fills the creeks running through the Rocky Mountains toward the Colorado River, water burbling over rocky creekbeds and providing a steady soundtrack for the season. Kentucky bluegrass, soaked with snowmelt, crinkles like paper underfoot. Otherwise, this is a silent time in the state’s mountain communities. Seasonal restaurants that depend on tourists are closed, and the shops and pubs that bustle during the winter season sit idle.

Even during the shoulder season, you can spoil yourself silly on toasted marshmallows and ritzy cocktails at Park Hyatt Beaver Creek. At the Exhale Spa, the massage table is wide open and it’s easy to spread out inside the Scandinavian-inspired soaking baths. With a six-month-old infant in tow, my wife, Alisha, and I found the hotel’s welcoming vibe and palatial spa to be just what we needed. The past year has been a paradigm shift for both of us. Accustomed to traveling far and frequently, we welcomed baby Olivia in October 2021 and have spent the months since adjusting to our new role as parents. Our primary aim in coming to Beaver Creek was to take it easy. 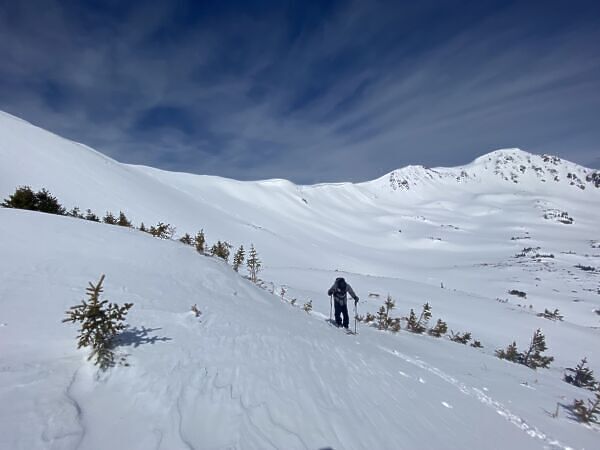 Still, a trip to the mountains is a bust if you don’t actually experience the mountains. This fact appears lost on most high-end mountain resorts. Not here. This Spring, Park Hyatt Beaver Creek launched its Mountaineering 101 package to assist aspiring summit-seekers in their alpine quests. For many, that quest is to stand atop one of Colorado’s famed 14ers, the state’s 58 peaks that reach above 14,000 feet in elevation. Others, such as myself, prefer to reach a summit and then ski or snowboard back down. In May, as lower-elevation trails begin to dry and the snow line creep higher, one can embark on mountain adventures ranging from hiking to skiing, and from mountain biking to camping.

Park Hyatt paired me with Jim Gabriel of Paragon Guides for a backcountry ski tour. Following a 7:00 AM pick-up at the hotel, Jim and I were strapped into our backcountry ski gear atop Vail Pass and on the trail in the Vail Pass Winter Recreation Area by 7:30. Touring through dense pine forest below Gore Ridge, north of Interstate 70 as it cuts the pass heading east to west, Jim pointed out several old Ute hunting trails dating back hundreds, if not thousands, of years.

The Utes inhabited the Vail Valley and its surrounding Shining Mountains as far back as 4800 BCE and followed bison, antelope, and other wildlife through the high country. Renamed after Lord St. George Gore, who in the 1850s slaughtered tens of thousands of animals in a showboating expedition of disgusting devastation, the Gore Range remains lined with old Ute hunting trails still used today by elk, deer, and brown bears. 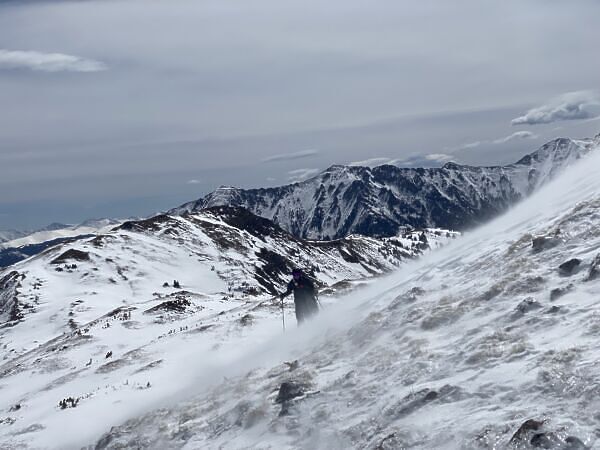 After a two-hour climb through the forest, we poked out above treeline atop Gore Ridge. The sun, still tucked behind the Rockies when we started our tour, had risen above the Ten Mile Range to our east, the only deterrent from an otherwise blue sky. Two inches of fresh snow overnight promised excellent spring conditions for our descent down the backside of the ridge. I cut fresh tracks down the open bowl, Jim following with his own line after I’d safely reached our designated stopping point.

Even as an experienced backcountry snowboarder, I’m a fan of ski touring with a guide. I’d toured Vail Pass several times before but had never been on the backside of this ridge, and likely never would have found the runs Jim and I took if it weren’t for his knowledge of the area. The fact that a traveler can have this experience set up for them by a luxury hotel in one of the state’s poshest resort villages speaks to Park Hyatt’s ability to think outside the typical offerings. 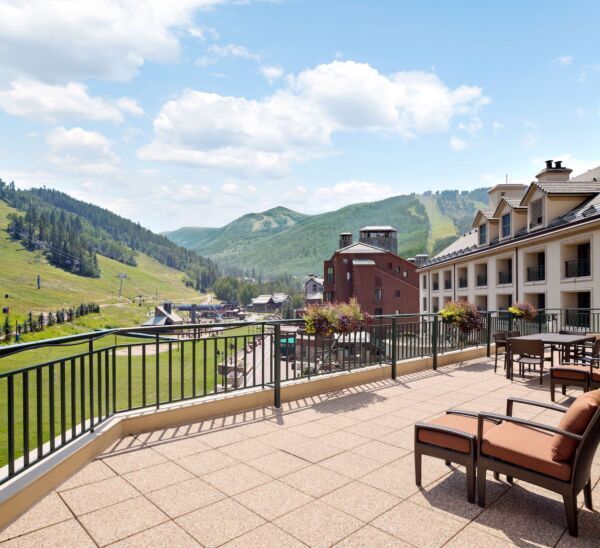 Speaking to Park Hyatt’s awareness of the early hours kept by many outdoor enthusiasts, its Fall Line Epicurean Market is open 24-hours a day. I’d stopped in to grab breakfast to go on my way out skiing. Upon return to the hotel, I met my wife and daughter for happy hour at Brass Bear Bar. An impressive whiskey list, including multiple Colorado-born brands, greets patrons, along with a tap list populated by local brews.

The only sigh we exhaled during our stay happened upon learning that the hotel’s refined dining establishment, 8100 Mountainside Bar and Grill, serves only breakfast during the shoulder season. Still, with a bar menu of burgers, charcuterie, and apps available at Brass Bear, a good dinner is readily available. We passed our evenings sipping beer on the patio under the purple gaze of the Rocky Mountain sunset, and after Olivia had gone down to sleep, we watched a movie from the hotel’s in-room theater selection. Traveling to a mountain resort town outside of peak season proved to be a perfect family weekend getaway.

“I love being here when no one else is here,” I overheard a passerby whisper to her friend as they both approached the vacant hot tub. I couldn’t agree more.

Epic Stays7 Vail Airbnbs That Make You Feel Like You’re in the Heart of Bavaria
Tagged
Epic Stays
What did you think of this story?
Meh
Good
Awesome

This Adults-Only, All-Inclusive Resort in the Dominican Republic Is the Epitome of Luxurious Wellness
13 of the Best Adults-Only All-Inclusive Caribbean Resorts
This Airbnb in North Carolina Has a 75-Foot Water Slide Into a Lake
These Stunning Cabins Are the Ultimate Zion National Park Basecamps
This Vegas Resort Is the Ultimate Adult Playground for Sports Lovers

18 Photos That Show How Wild the GoPro Mountain Games Are

The 6 Vail Hotels Perfect for Your Upcoming Ski Getaway

7 Ways To Spoil Yourself on Your Next Ski Vacation

7 Great Travelstoke Spots in and Around Vail, CO