On a remote archipelago above the Arctic Circle, with a total population of under 3,000, you might think break-ins would be relatively uncommon. While crime is nearly nonexistent on Svalbard, as far as humans are concerned, residents are always on the lookout for the archipelago’s most notorious troublemaker: polar bears. On Sunday, a polar bear broke into a food storage room at Isfjord Radio, an old radio and weather station a few hours north of Longyearbyen, the world’s northernmost settlement with over 1,000 permanent residents. The radio station now operates chiefly as a hotel, and the break-in gave its management and residents quite a scare. 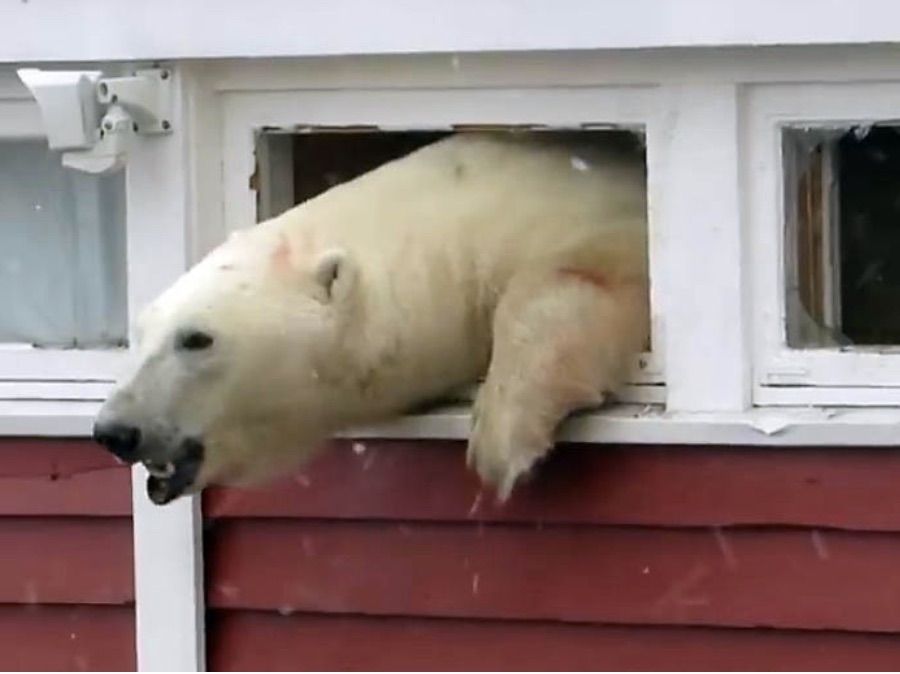 The large male polar bear made itself right at home in the storeroom, eating chocolates, smashing wine bottles, and shattering windows before a rescue helicopter scared it away. “The bear was clearly stressed,” said station manager Malin Stark to the local media. “He had broken all the small windows along the wall.”

At the time of the incident, there were five employees and ten guests at the station, who had a rare opportunity to photograph a polar bear up close. Marit Devik, a visitor at Isfjord Radio, wrote on Facebook that it was an “exciting start to the day…I had basically given up getting to see any special animals this weekend.” She added that “we felt jubilation when we saw it run freely…as it should.”

But the bear wasn’t finished yet. The bear returned to the station that evening, prompting officials to consider sedating it and flying it away by helicopter. The decision doesn’t appear to have been made yet, but the authorities said they will be making it in collaboration with a polar bear expert.

I can’t say I blame the bear. Once you find a stash of chocolate, it’s tough to keep your paws off it.

8 Reasons Svalbard Is the Most Unique Place on Earth
Tagged
News
What did you think of this story?
Meh
Good
Awesome