One of the best things about Portland, Oregon is that it’s a nature-centric city. Portlanders have a strong affinity for greenspace, and it shows. Portland’s extraordinary gardens and parks offer fantastic displays of the weird, wild, and “wow” of nature and are a testament to greenthumbery at its best.

What’s even more interesting about Portland gardens is that they display far more than just the flora of the Pacific Northwest. Within the best Portland gardens, you’ll find plants and trees from as far as Japan, Europe, and southeast Asia.

These are the best gardens and parks to visit in Portland. 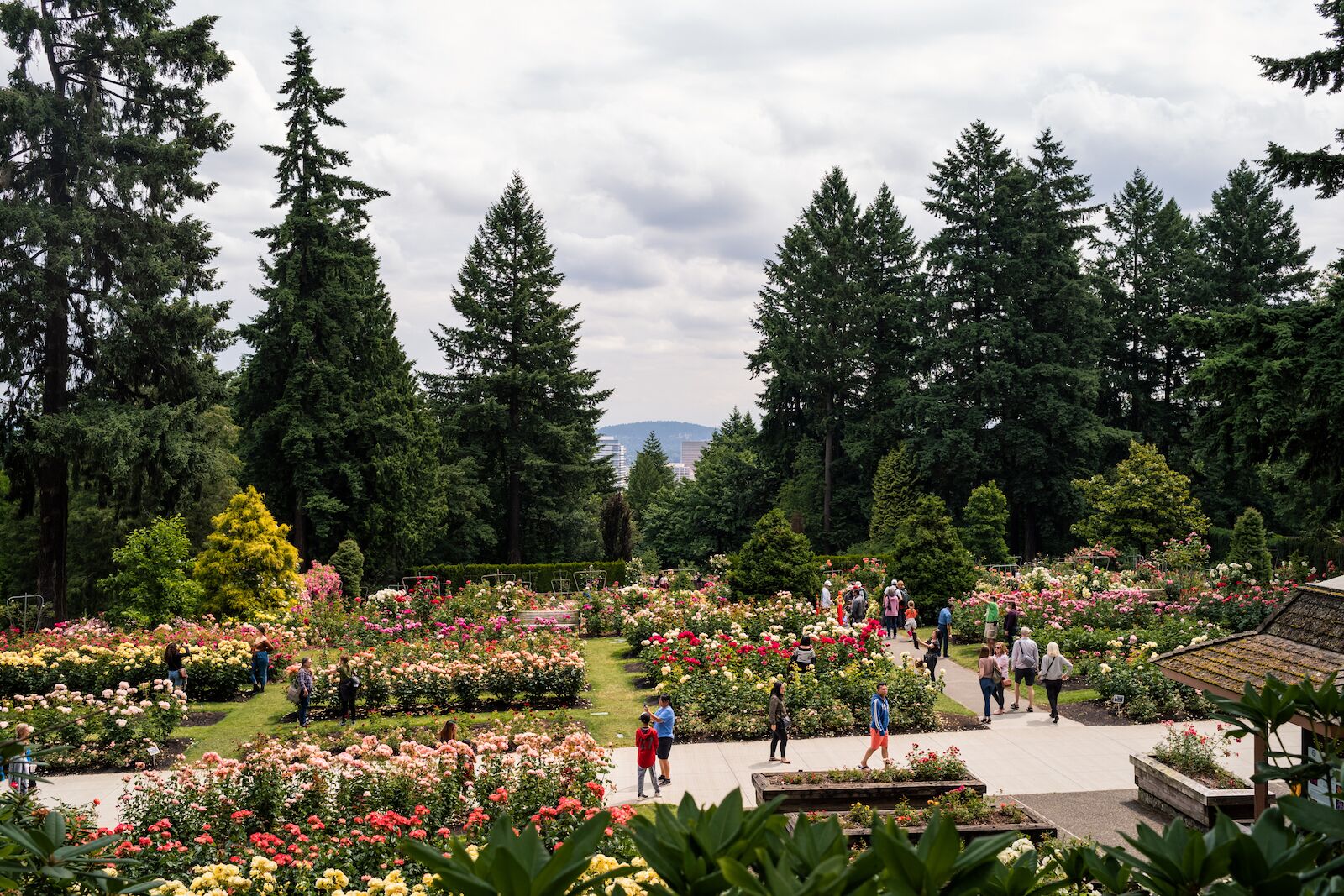 Stop and smell all the roses at the International Rose Test Gardens in Washington Park, which serves as a testing ground for new rose varieties. It’s perhaps the most well known of the various Portland gardens. It would be quite an endeavor to try to smell all of the 10,000 individual rose bushes from 610 different species, but you could certainly try.

The majority of the roses are commercially available and 10 to 20 of the varieties are replaced each year with the newest, hottest roses released onto the market. You can buy plants at the garden, but otherwise, it’s totally free to visit. There’s even a free shuttle that runs through Washington Park and stops at the rose garden gate. There’s also a parking lot near the rose garden with a $2 parking fee. 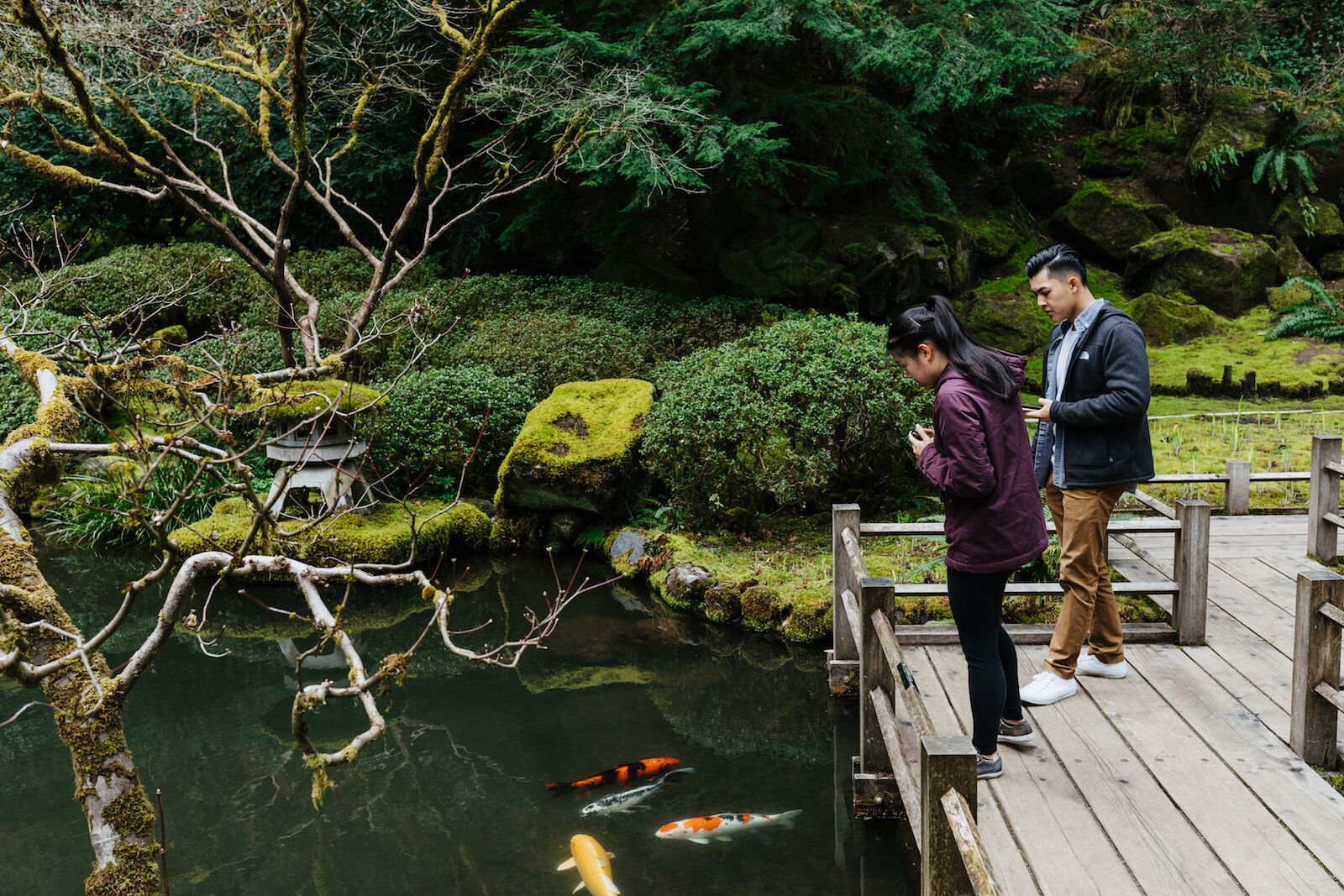 The Portland Japanese Garden has been open to the public since 1963. It’s designed in the same style as traditional gardens in Japan, where the focus is on creating a physical and mental break from the outside world, giving visitors to this Portland garden a chance to focus on tranquility and natural beauty.

It’s part of Washington Park and has five unique gardens, including the “Strolling Pond Garden” with idyllic bridges and the “Sand and Stone Garden,” where raked sand and moss-covered stones invite guests to ponder the beauty and potential of blank space.

Some of the footpaths are intentionally built to slow visitors down and help them embrace a leisurely pace. Visitors can usually see Mount Hood on clear days and there’s an on-site Japanese Tea House to break for matcha and handmade confections or buy Tokyo-made tea sets.

Tickets are $19.95 for adults and include admission to the gardens, a guided tour, and entry to the galleries and various exhibitions. Hours vary throughout the year, but they’re always closed on Tuesdays. 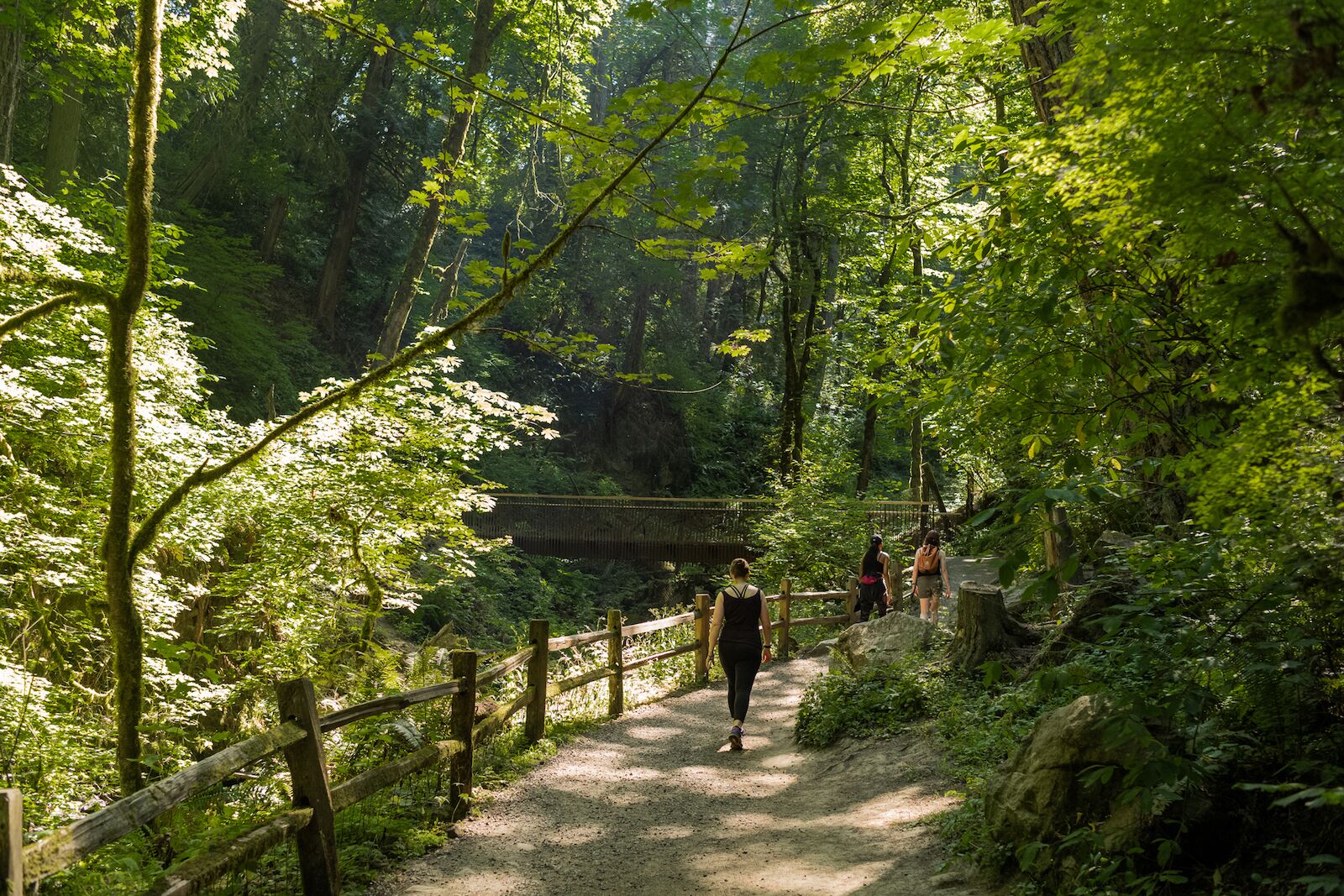 Lucky Portland locals have one of the largest urban forests in the United States in their backyard. Boasting 5,200 acres with 70 miles of trails, fire lanes, and forest roads, Forest Park is the quintessential Pacific Northwest green space. The Portland garden park is popular with nature lovers who want to wander in surrounds native to the PNW.

The park is thick with Douglas fir, grand fir, Oregon white oak, pacific madrone, and bigleaf maple trees, and smells like a woody oakmoss candle in real life. It’s beloved by bird-watchers who visit in the morning to spot more than 100 species of native birds (the park abuts the Audubon Society of Portland Sanctuary) while hikers, cyclists, and equestrians laud its designated trails. 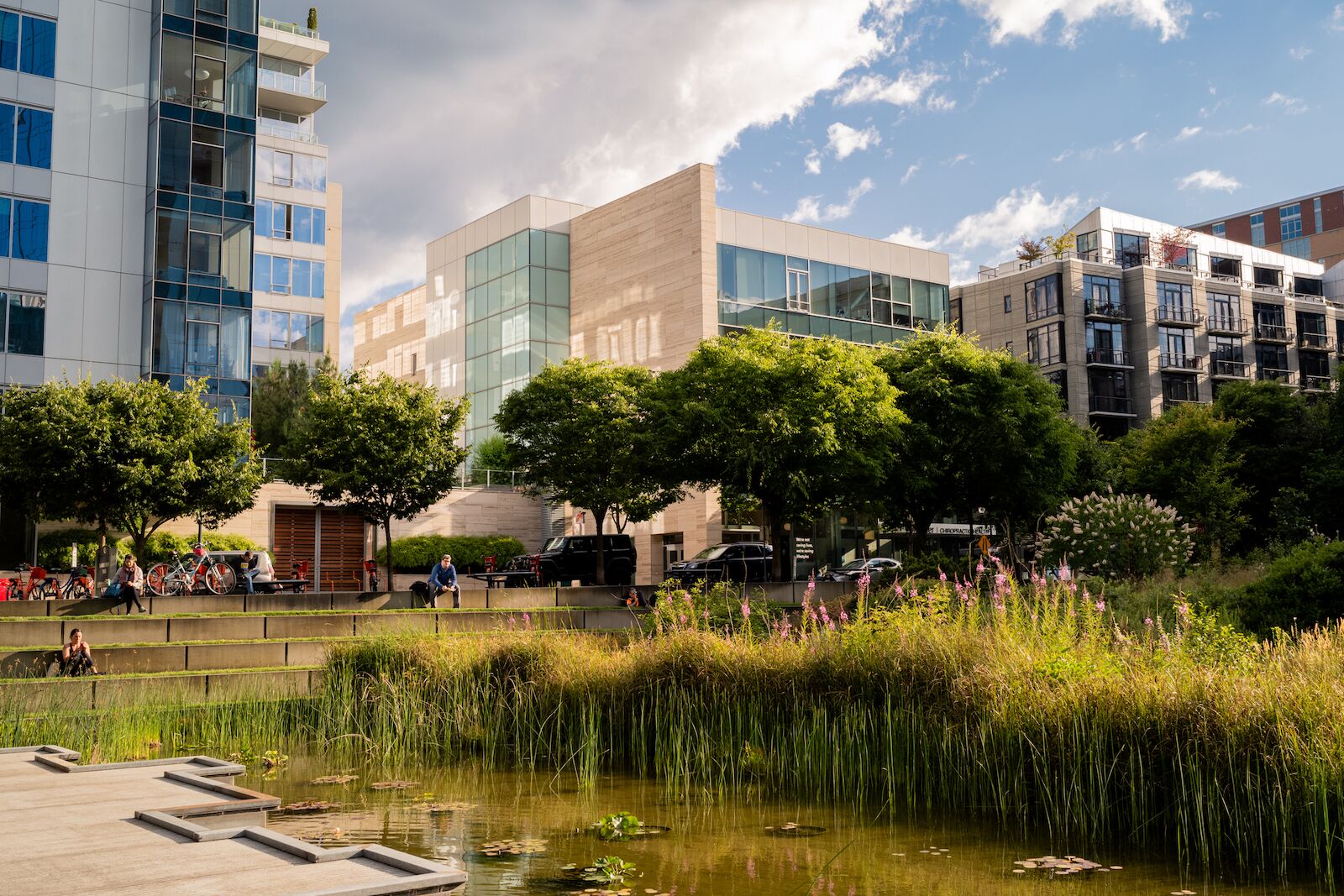 Portland has many unique districts, one of which is the aptly named Pearl District. The warehouse- and factory-heavy neighborhood developed in the mid-to-late 1800s, but it wasn’t until the 1980s that it earned its moniker. While the buildings may be unattractive on the outside, they now house artists and hip bars, beautiful galleries, cool breweries, and trendy restaurants — much like how a pearl is beautiful on the inside.

Tanner Springs Park is the gem of the Pearl District (pun slightly intended). The one of the most sustainably designed Portland gardens, centered around a waterscape and opened in 2003. The park protects examples of the freshwater ponds, emergent wetlands, wet prairies, and oak woodlands found in the Willamette Valley, and is a natural space rather than a manicured and maintained garden.

Notable features include an art wall running along the eastern edge of the park. It’s made with repurposed railroad tracks and glass sculptures of local native insects and amphibians. The park isn’t huge, but it’s a lovely place for a stroll and a chance to see sustainable, natural design in a public space. 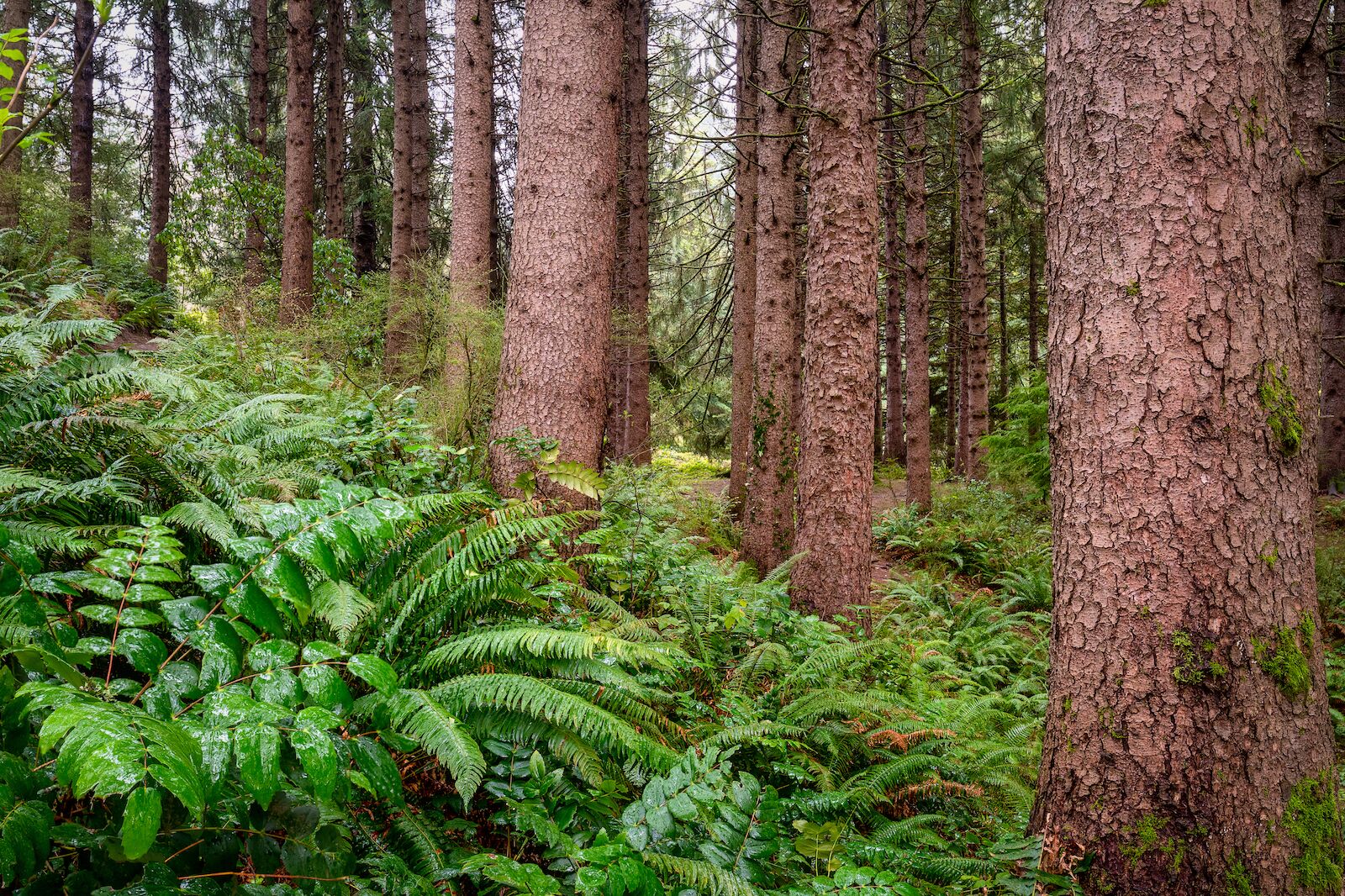 You don’t have to be a treehugger to enjoy Portland’s living museum of trees, though a few hours here might turn you into a fully-fledged dendrophile. The Hoyt Arboretum is part of Washington Park and has 2,300 tree and plant species from six continents entirely maintained by volunteers.

It’s one of the best Portland gardens for stretching your legs, with 12 miles of trails through the magnolia collection, maple collection, and a bamboo forest. Don’t miss the Redwood Trail, which has three species of redwoods planted in the 1930s and ‘50s: the coast redwood, the giant sequoia, and the dawn redwood -– just try to resist the urge to hug those trunks.

This is a free garden, and the public are invited to attend events throughout the year, from lectures and guided forest bathing to tai chi and educational herb walks. 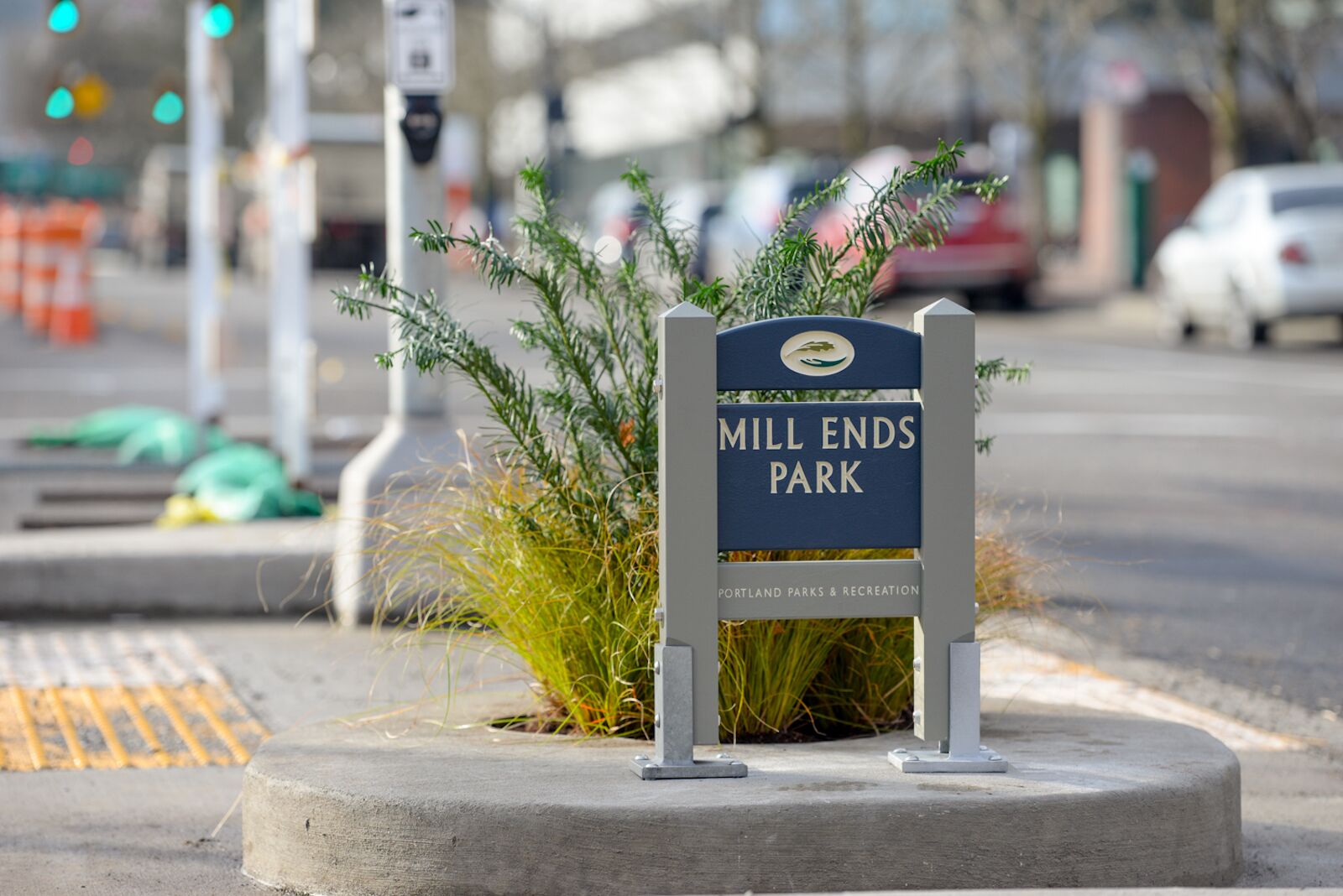 What Mills End Park lacks in size it more than makes up for in character.

The world’s smallest park, according to the Guinness Book of Records, is a tiny urban park in a street median between Pacific Highway and Naito Parkway in downtown Portland. It’s a scant 452 square inches and consists of one tree and sometimes flowers.

In true “Keep Portland Weird” style, the park was developed by a journalist named Dick Fagan in 1946, who planted flowers in the empty space following a street pole removal. He wrote a column about fictitious park happenings in his self-proclaimed park — most about a group of leprechauns, who Fagan claimed had established “the only leprechaun colony west of Ireland” in the park. The park was dedicated in 1948 and became an official city park (and garden, when the flowers are there) in 1976.

Visiting the park is free, though as you might expect, only about two people can visit at one time. 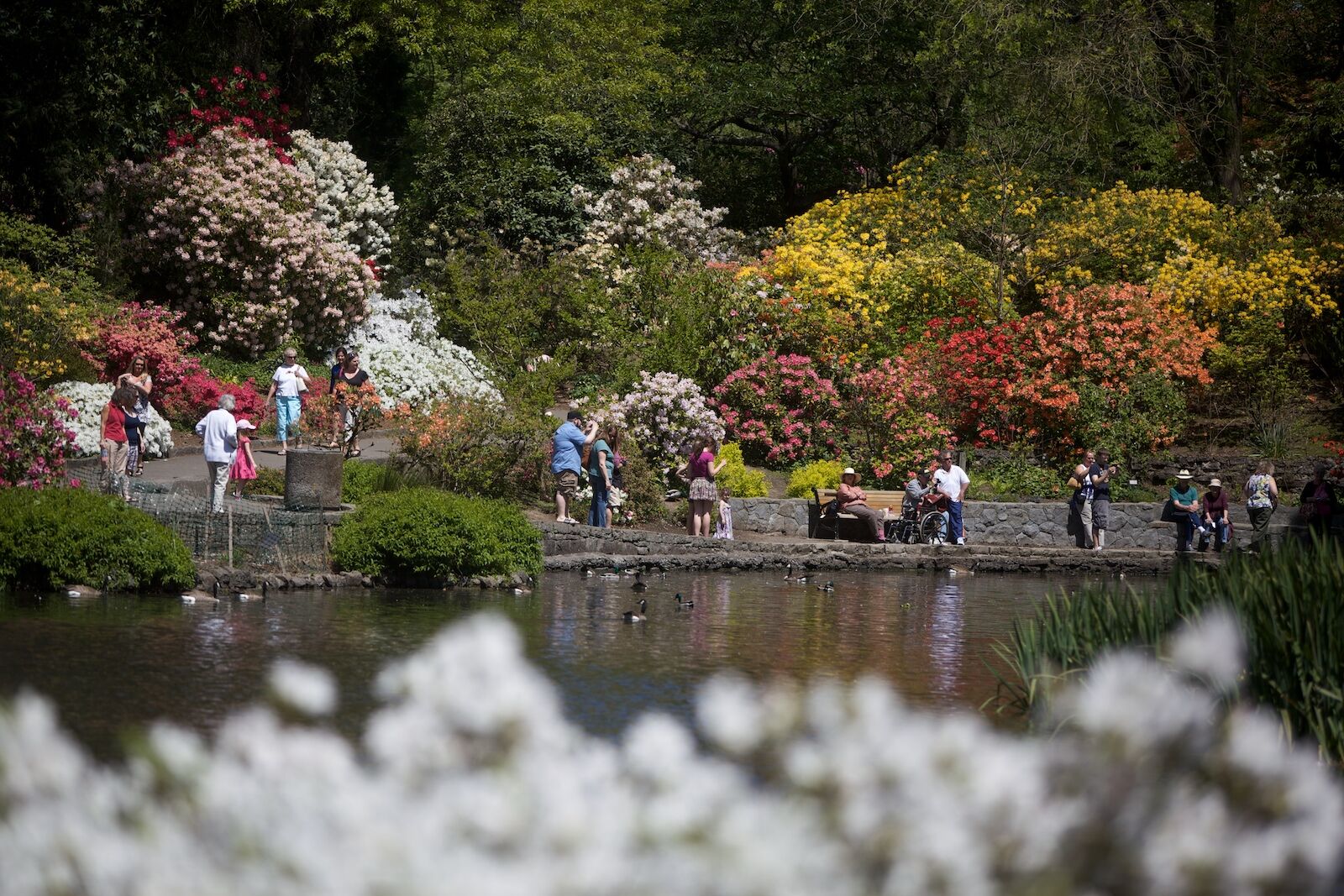 A pleasant meander around the nine-acre botanical garden reveals more than 2,500 rare species of rhododendrons, azaleas, unusual plants, and lesser-known shrubs. This is one of the most beautiful Portland gardens, with gentle walking paths, waterfalls, a large water fountain, and a whimsical wooden footbridge.

It was originally the home of Portland Mayor William S. Ladd in the 1880s, but became a test garden in 1950 and the Crystal Springs Rhododendron Garden in 1964. In some sort of impressive botanical flex, the oldest rhododendron that’s still alive today was planted prior to 1917. The garden is also quite popular with birders as Crystal Springs Lake attracts a wide variety of waterfowl.

Admission to the park is a reasonable $5, though it’s free every Monday.

6 Must-See Waterfalls Near Portland You Can Reach in Half an Hour
Tagged
Outdoor Portland, OR, United States
What did you think of this story?
Meh
Good
Awesome

The 5 Best Rivers in Vermont for Fly Fishing

18 Photos That Show How Wild the GoPro Mountain Games Are

Bring the Dogs: Tips for RV Travel With Pets