Portland, Maine, is probably not the first Portland that comes to mind — Oregon’s city of the same name has effectively become synonymous with cool, a hipster mountain town that specializes in good vibes and good views. Because of this, Maine’s Portland is often overlooked when it comes to deciphering between the two; however, their similarities don’t stop at their names. Portland, Maine, also has an insane amount of craft beer, with new breweries opening frequently, and outdoors adventures are abundant, from lighthouses to nearby national park.

It’s in the autumn season when the temperatures are dropping and the entire Northeast is on the precipice of plunging into winter that Portland, Maine, shines like its famous lighthouses. The leaf-peeping in this part of the country is renowned, and beyond that, there is much to do in Portland in the fall, from the cobblestone streets of the historic epicenter Old Port to industrial-turned-trendy neighborhood East Bayside.

Maine’s Portland is simply the ultimate fall destination. Here’s why, exactly, you should visit this season. 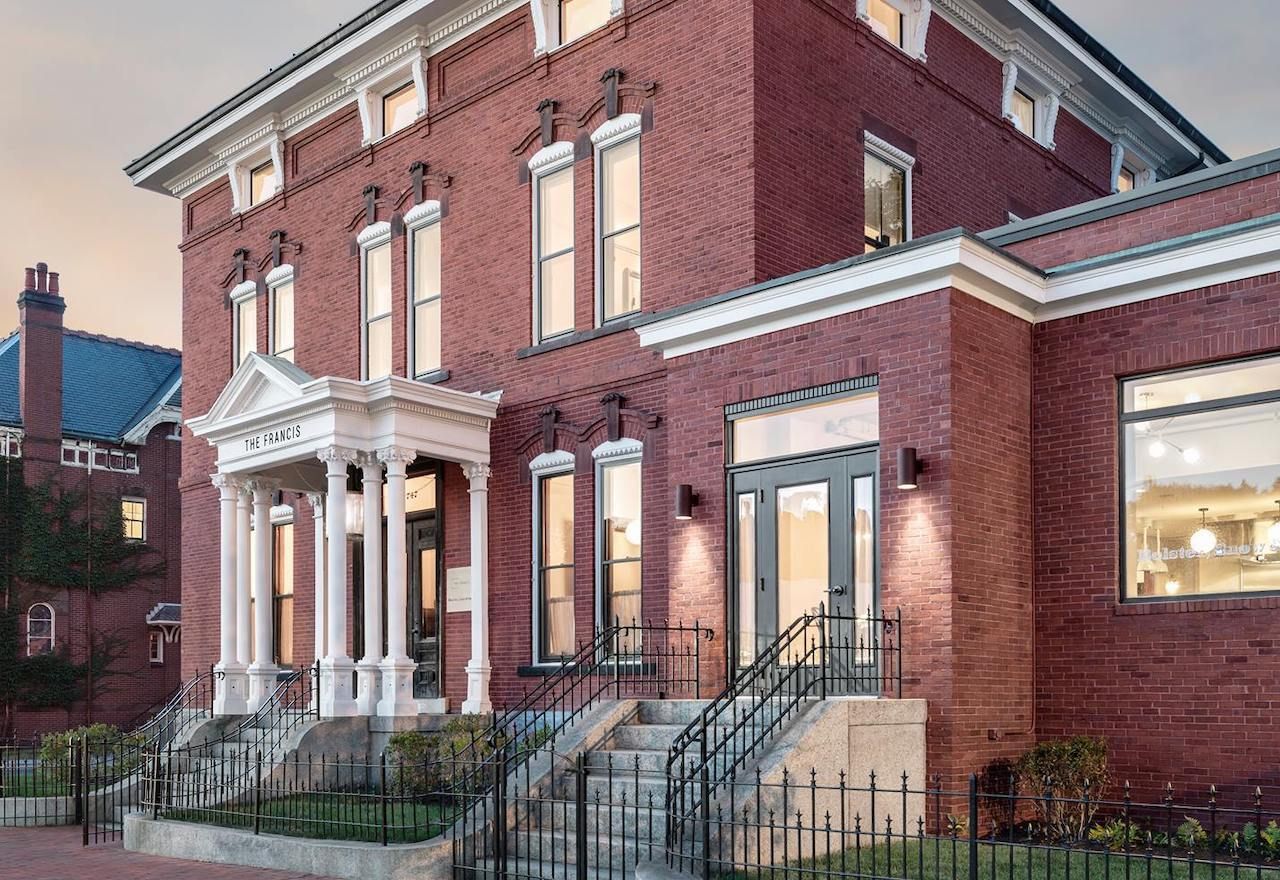 A slate of new hotels have cropped up in Portland — the AC Hotel from Marriott opened last year; the Press Hotel, a few years ago; and most recently The Francis Mainef, a renovated Victorian manor turned into a boutique hotel. Nestled in Portland’s West End, this new property distinctly captures Portland’s creative revival, precariously balancing Portland’s new and old selves — beyond a stained-glass front door lies hip, mid-century modern furnishings; a small spa offers treatments imbued with en vogue infusions, such as CBD and Reiki; and each of the hotel’s minibars is stocked with local Maine products. The boutique hotel’s name pays homage to the building’s designer, Francis Fassett, who helped to rebuild much of Portland after its Great Fire of 1866. After a two-year restoration to the building, Francis has put a fresh face on Portland’s hospitality scene, much like its namesake did 150 years ago.

The Harvest on the Harbor festival 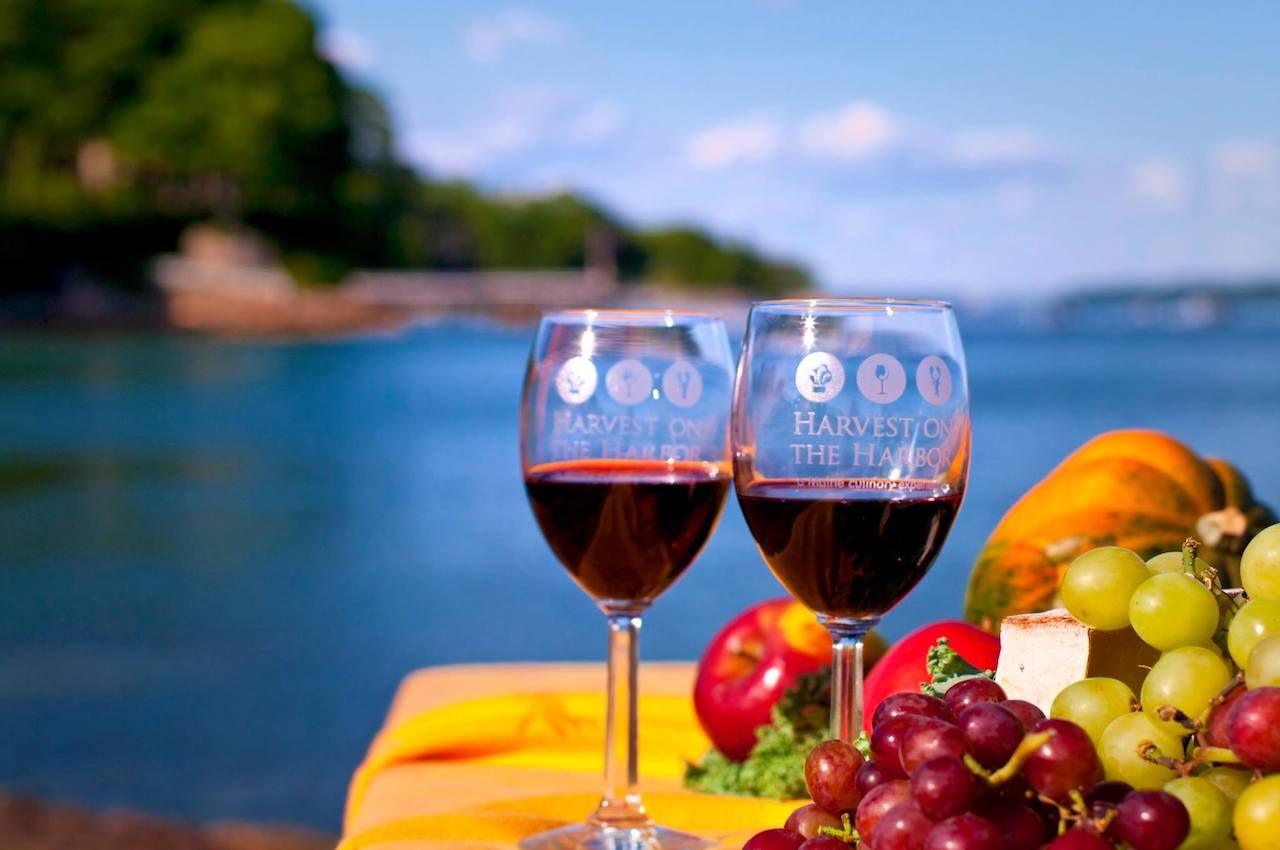 Photo: Harvest on the Harbor/Facebook

This is not the only fall festival in town, but it is the most noteworthy. Harvest on the Harbor (or simply HOTH) is just what the name implies — Maine’s many culinary talents converge in Portland’s scenic harbor for four days of epicurean indulgence. The fete itinerary includes gin tastings from some of New England’s most under-the-radar distilleries, with the likes of Hardshore Distilling, Three of Strong Spirits, and Wiggly Bridge Distillery (try saying that three times fast after the tasting). Also on the agenda: a morning coffee mixing class; a 10-course lobster tasting; oyster shucking, with beers and bubbly to accompany; and a chef and farmer collaborative dinner with wine and Allagash pairings.

So much craft beer 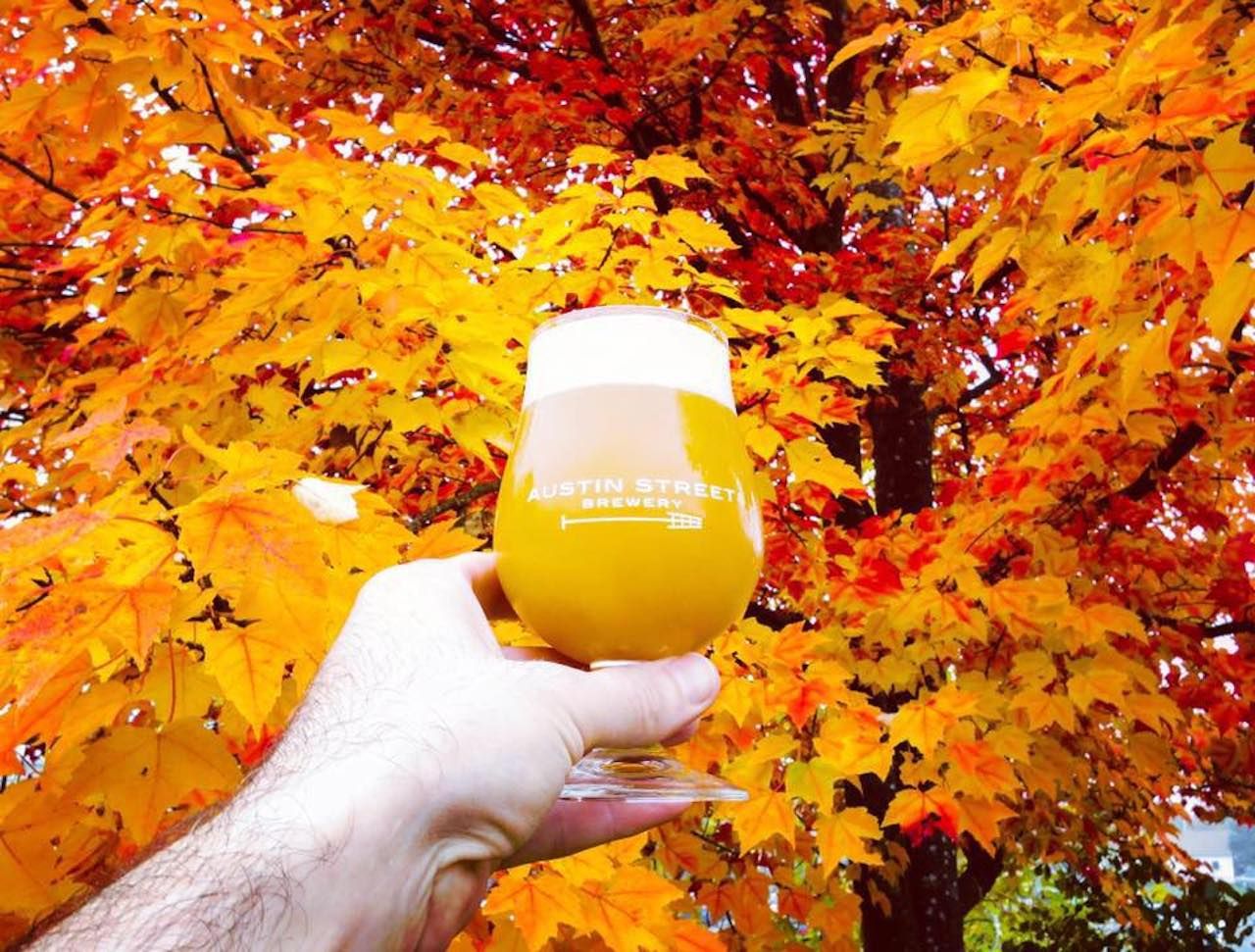 Allagash is Portland’s best-known brewery, serving mostly affordable yet surprisingly refreshing brews around the country. But there is a slew of other craft breweries along the harbor. Austin Street Brewery, off the heels of opening its second Portland location, serves almost entirely small-name beers — try the Neverender, an Australian-hopped Double IPA with a powerful tropical fruit flavor. Goodfire Brewing is a relative newcomer, with cans recognizable for a cool minimalist aesthetic. Food trucks frequent Goodfire’s taproom, with the option to pair with ingenious drafts like Crystals, a Galaxy Double IPA or CMYK, the Portland IPA. 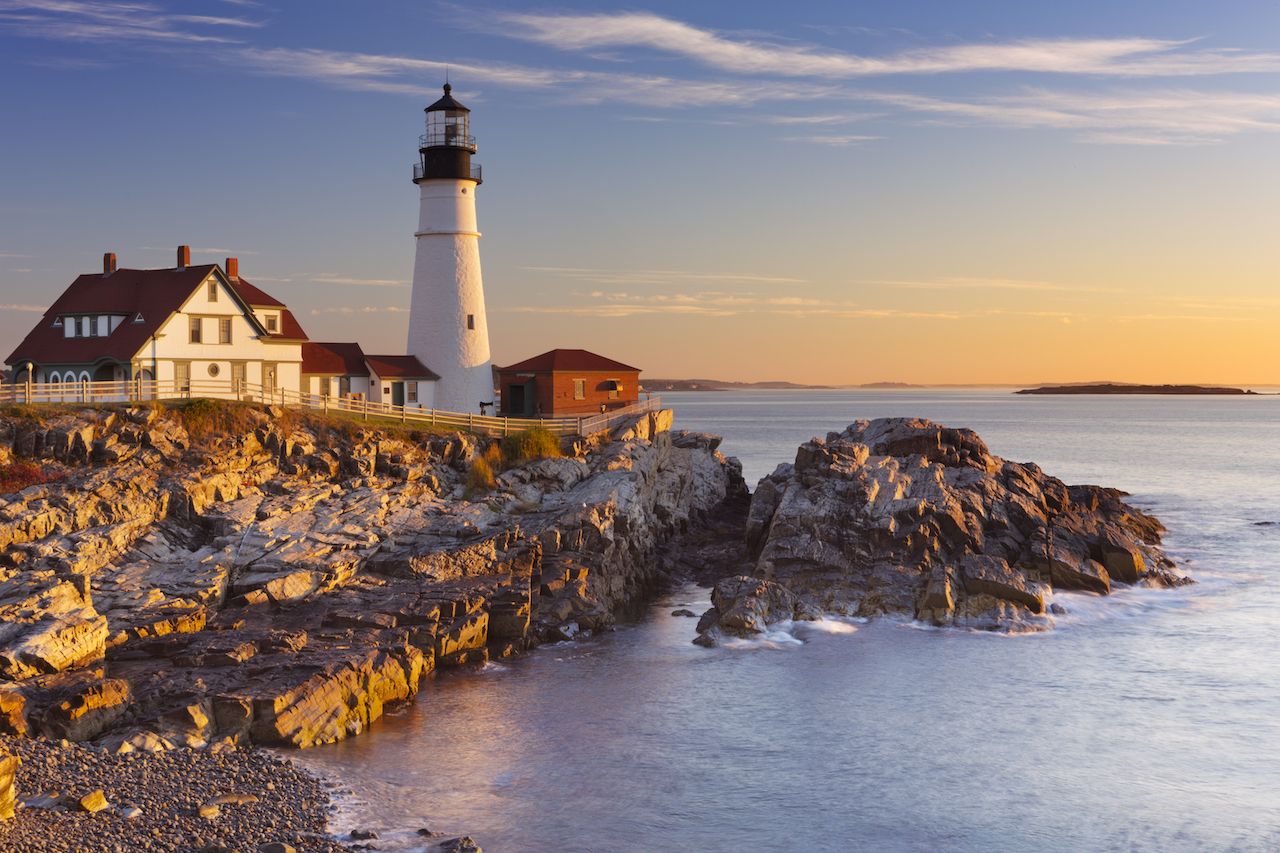 Few things are more archetypally New England than the lighthouses that sentinel the region’s craggy seaside, beacons that have become symbols of Portland and greater Maine. The state’s oldest operating lighthouse is the Portland Head Light — you might instantly recognize this luminous edifice, as it is one of the most photographed in America. Situated in Cape Elizabeth, only a five-mile drive from Portland proper, the lighthouse is surrounded by hiking trails, a children’s garden, a small beach, and idyllic views of the Atlantic. Another smaller but just as scenic option is Spring Point Ledge Lighthouse, the only caisson-style beacon in the US, meaning it was built on a large metal cylindrical caisson structure directly into the water. Today, a rocky breakwater connects the tower to the mainland for visitors to easily explore, although a century ago this was only accessible by boat — a sometimes perilous journey in the stormy waters of Portland’s bay. 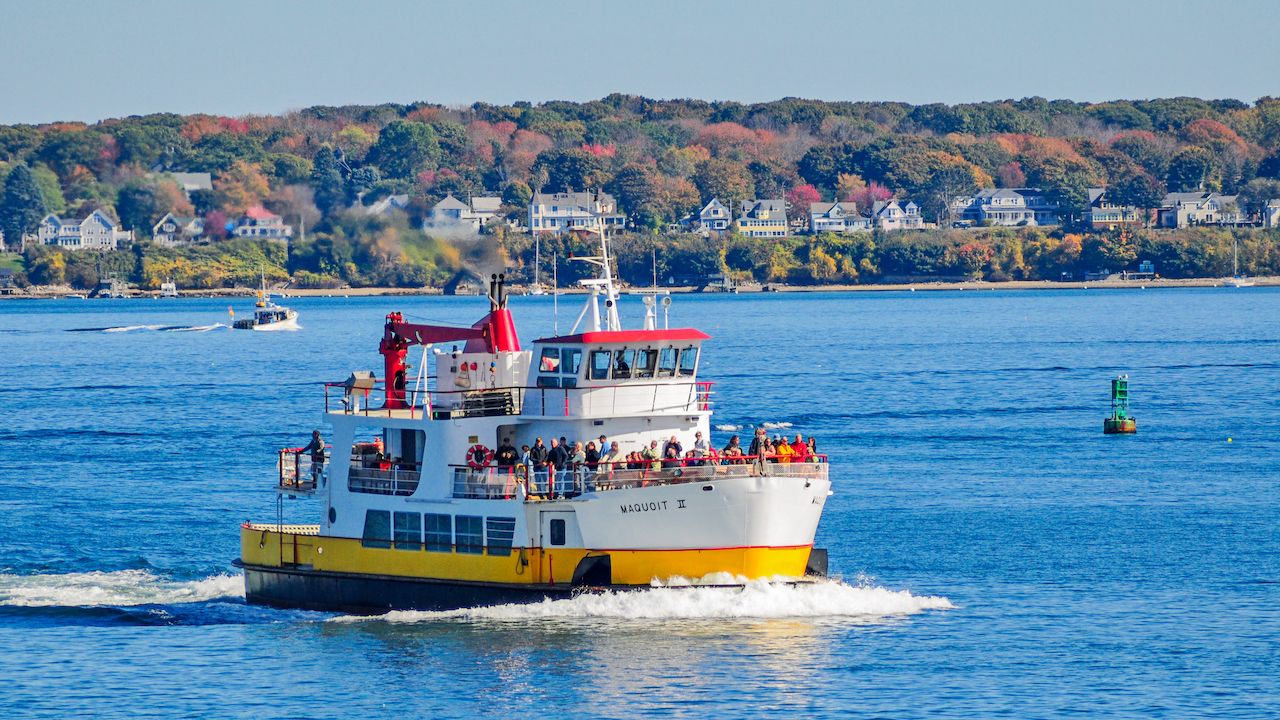 The fall foliage in New England is the stuff of legend — millions of leaf-peeping pilgrims flock to the great forests and spectacular harbors to receive the seasonal benediction of these varicolored leaves. This is the nonpareil reason to visit Portland in October — the trees along the harbor flaunt a bouquet of red, yellow, and burnt orange. While the trees lose chlorophyll, Portland gains visual treasures. You can see foliage throughout the city, but climb to the top of the Portland Observatory for panoramic views of the harbor, or go for a walk along the Eastern Promenade, a waterfront and tree-lined trail built along an old rail corridor. The first few weeks of October are best to see the foliage in Portland and the surrounding nature — you can even track the changing of colors with this map. Acadia National Park, home to miles of undisturbed woods, is only a three-hour drive from Portland and an easy fall day-trip option. 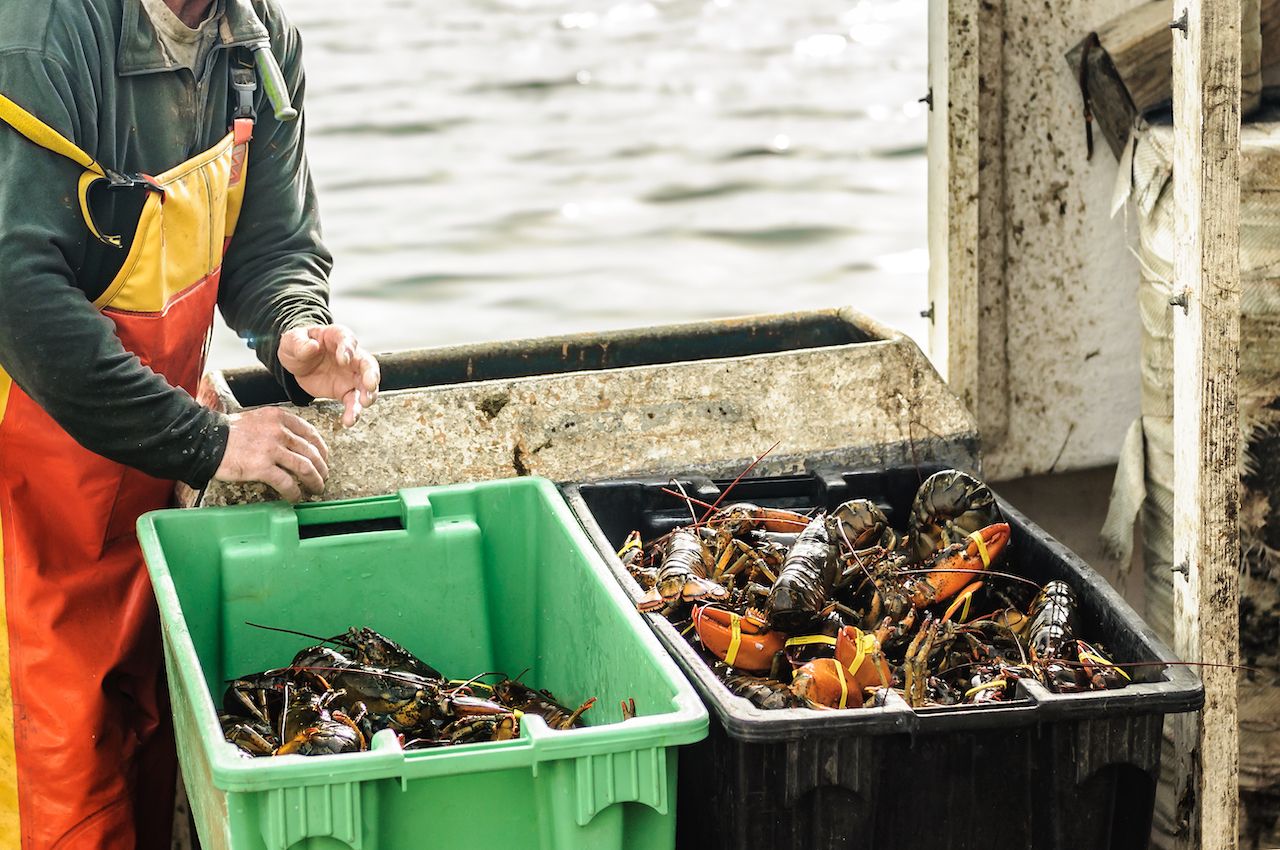 To avoid discriminating against the other seafood that Portland serves up — oysters, clams, mussels, crab — the scope of this category has been made broader than just lobster, although that is the pièce de resistance of Maine’s culinary offerings. Lobster rolls, lobster chowder, lobster fritters, steamed lobster — eat it all and savor every last bite because Portland’s famous dishes featuring the red crustacean deserve the praise, and fall is the last chance you’ll have to enjoy it fresh this year.

You’ll find ocean fare on every menu, but there are a few places locals flock to that don’t have lines of tourists out the door like some of the trendier lobster roll hotspots in town. Gilbert’s Chowder House serves this eponymous soup in a bread bowl, classically New England and pleasant on a crisp fall day. J’s Oyster is a no-frills locavore restaurant that has been around for 40+ years, impressing all visitors — even Anthony Bourdain in 2011 — with its overflowing buckets of steamed clams, piping chowders, and hearty seafood pasta entrees. Scales is a more upscale option, residing in a post-industrial warehouse on a wharf in the Old Port neighborhood, with a massive ice bar displaying raw seafood and a fish-heavy menu ranging from grilled octopus to seared scallops.

Observing the ocean’s gentle giants is an activity that can be enjoyed in the summer and fall months, but it is great to do in October because come November, Maine’s famous whales have already gone south for the warmer waters. Odyssey Whale Watch ferries travelers around Portland’s harbor to observe not just whales but also other marine wildlife (turtles, sharks, porpoises) and give spectacular waterside views of mainland Portland and Casco Bay. The naturalist-guided tours are four hours long and run through October 20.

Train TravelThe Best Fall Train Rides in the US
Tagged
Travel Trip Planning Portland, ME, United States
What did you think of this story?
Meh
Good
Awesome

Where To See Art in Portland, ME