Wow, where’d summer go? One minute you’re grilling up burgers for the Fourth of July and the next Labor Day is right around the corner. But don’t lament the end of summer; fall brings the nicest time of the year in many parts of the country — specifically, those parts where trees go from green to all shades of red, yellow, and orange. Driving to see those colors is fun, but to really experience their magic, a train ride is the way to go. Across the United States, there are some spectacular train rides to see autumn colors, from the famous fall foliage in New England to more underrated fall destinations like Colorado, Alaska, and Tennessee. Here are the 16 most scenic fall foliage train rides in the US to hitch a ride on. 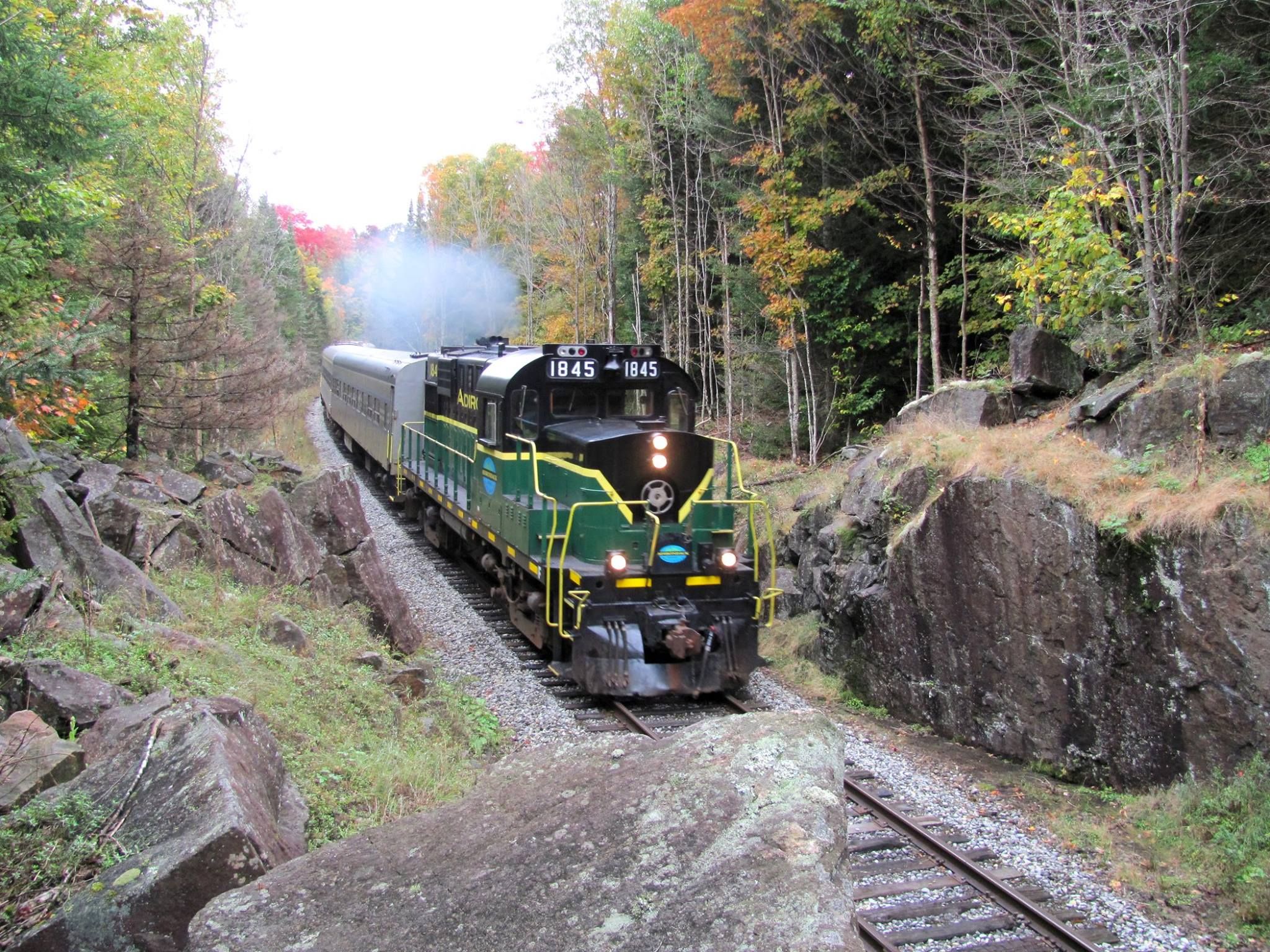 This trip with Adirondack Railroad rumbles through New York’s High Peaks region, into Central New York, and on to Utica, past some of the most colorful leaves in the Empire State. The railroad is also partnered with rafting companies, hiking guides, and bike rentals so you can experience the colors up close once you disembark. Look out for Adirondack Railroad’s offers of fall beer- and wine-tasting rides during which you can taste some of the best drinks from the region as you watch the changing trees speed by. 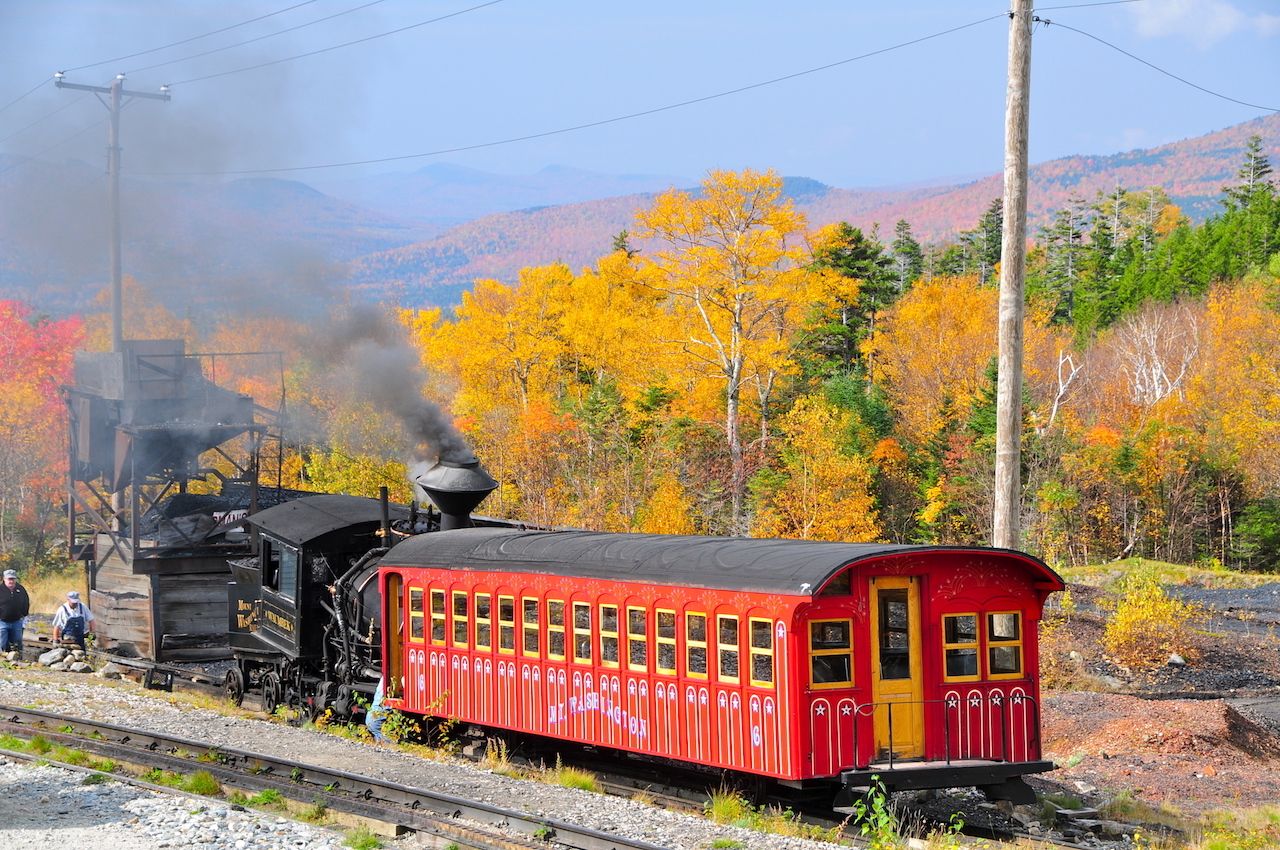 This old cog railroad has been going through the mountains of New Hampshire for more than 150 years, taking visitors to the treacherous summit of Mt. Washington via one of the most scenic fall foliage train rides in the country. The charming wood cars of the Mount Washington Cog Railway chug up to the highest point in the northeast, a three-hour round trip that spends an hour at the top to take in the views over seemingly all of New England. The tableau of oranges, yellows, and deep reds below might be the most impressive sight of any ride on this list. 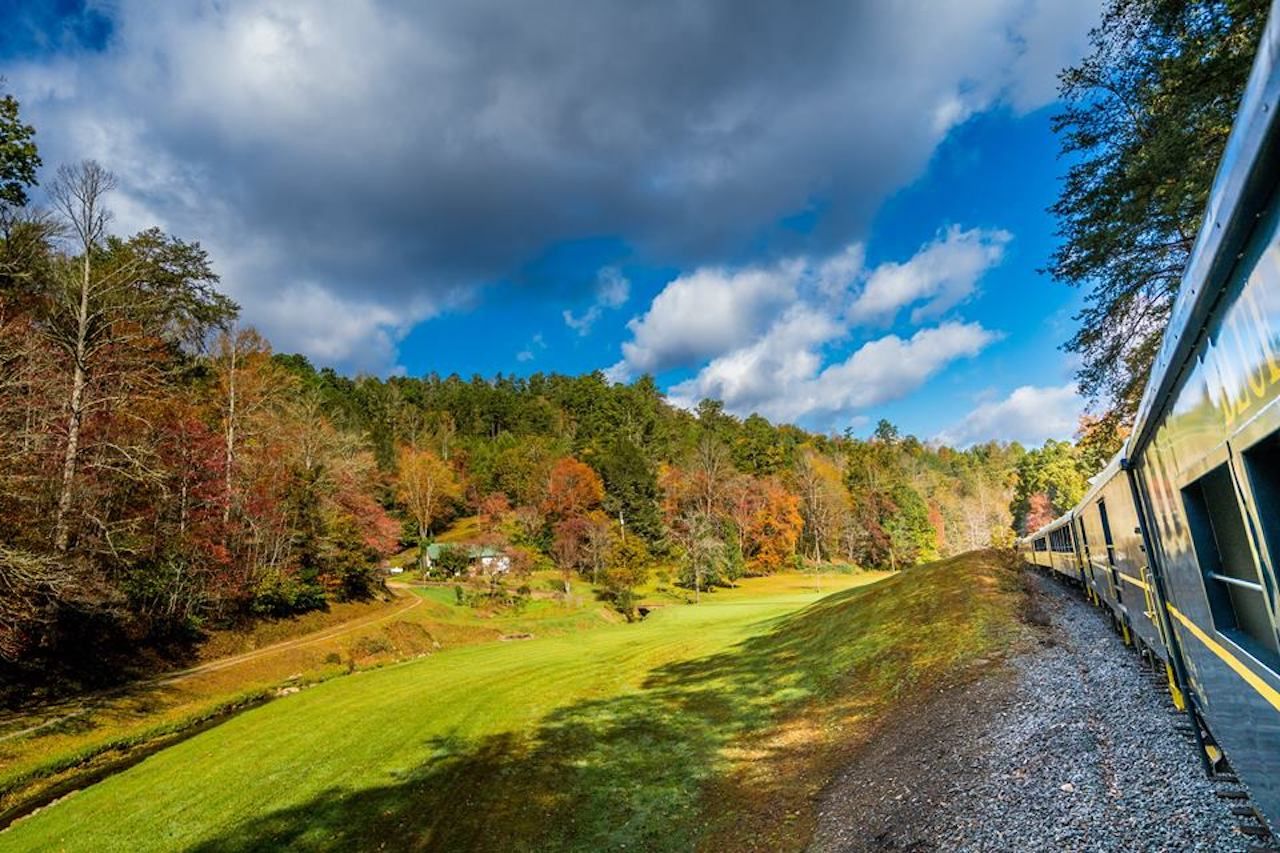 The Blue Mountains are grossly misnamed during the fall as the normally dark hills turn bright colors in September and October. This 26-mile train ride from Blue Ridge to the Georgia-Tennessee border is the best way to enjoy it, with a few hours to stop in the towns of McCaysville, Georgia, and Copperhill, Tennessee. Enjoy the crisp fall air from an outdoor car, as you pass through the Chattahoochee National Forest along the Toccoa River. 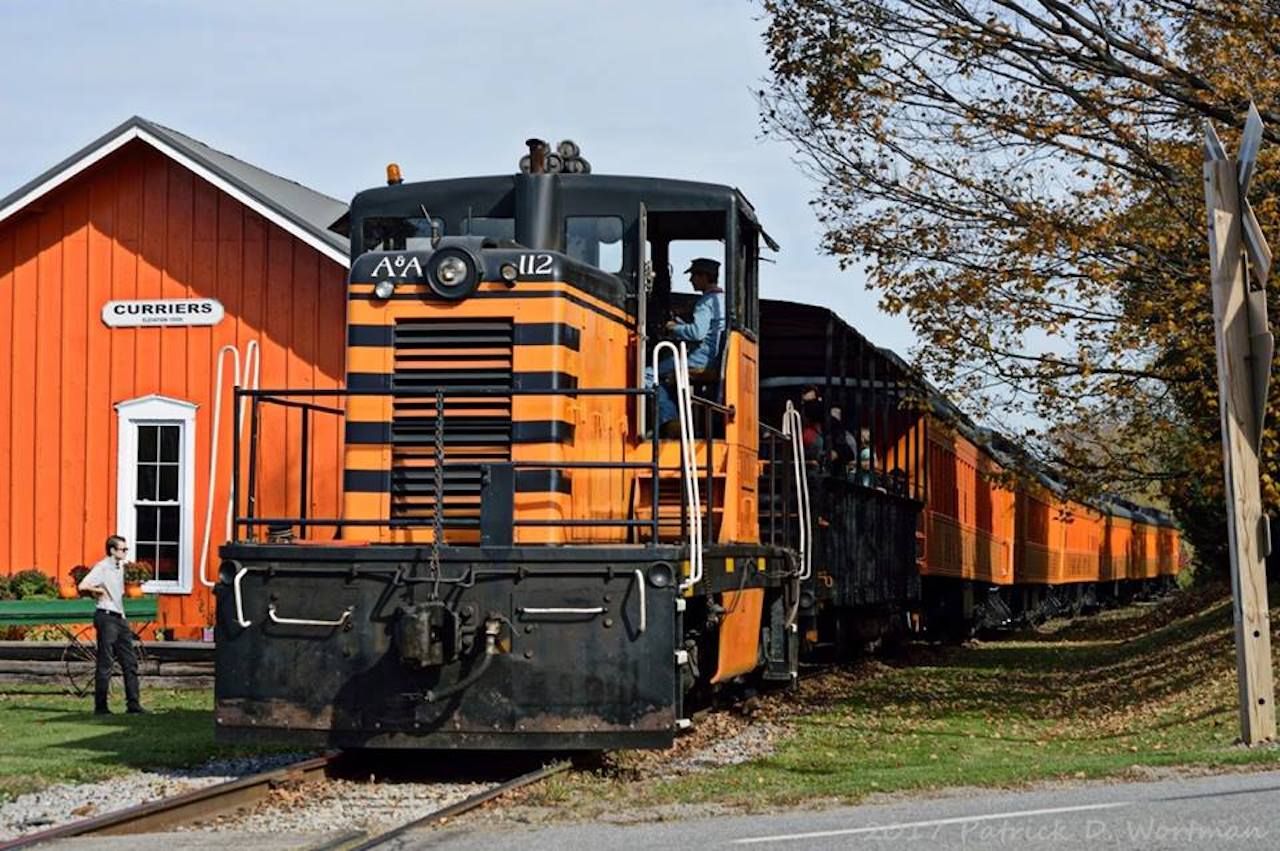 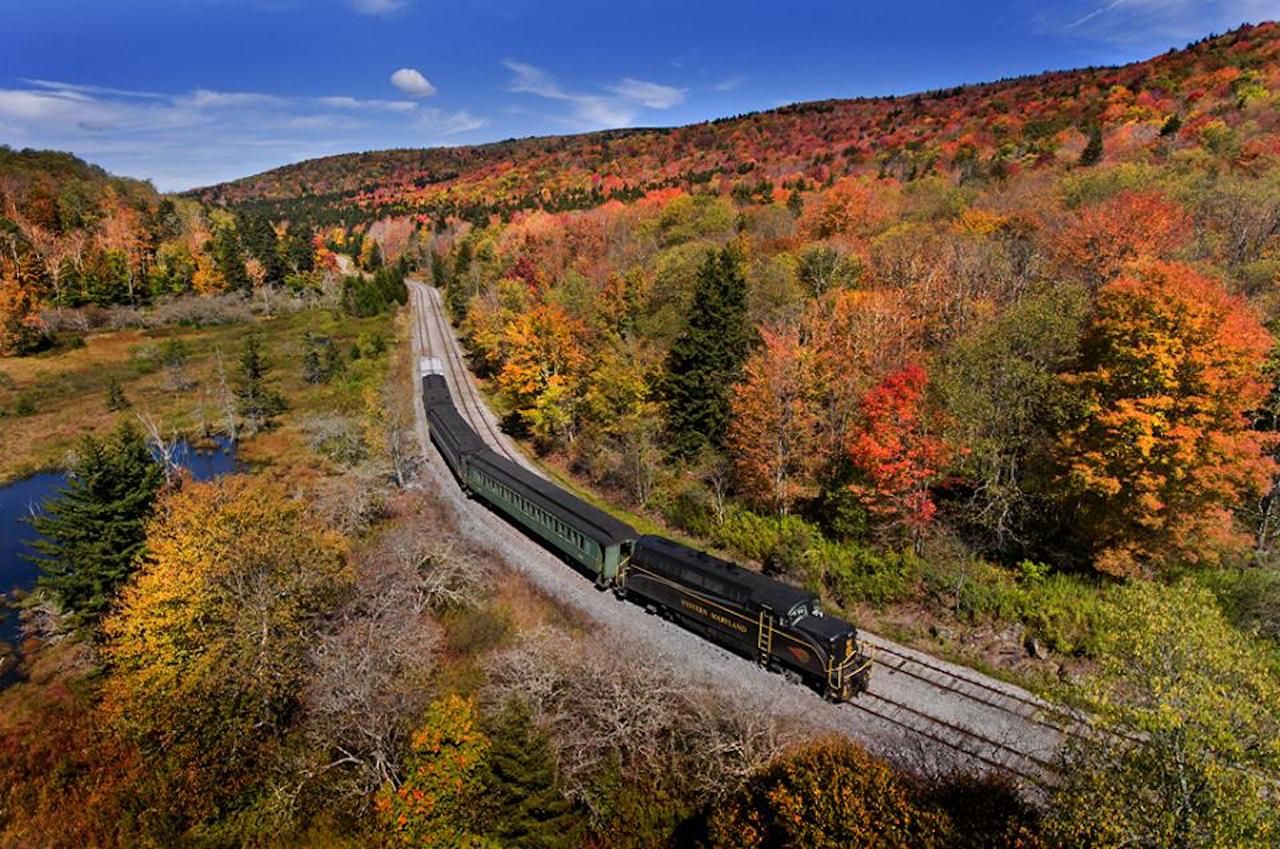 The sheer size of the mountains in West Virginia makes fall the most impressive time to visit, with steep curtains of orange, red, and yellow throughout the state. The Durbin and Greenbrier Railroad offers the best variety of ways to see it, from a 4.5-hour venture to the third-highest peak in the state on the Bald Knob trip to the two-hour Whittaker trip on the coal-powered Durbin Rocket. 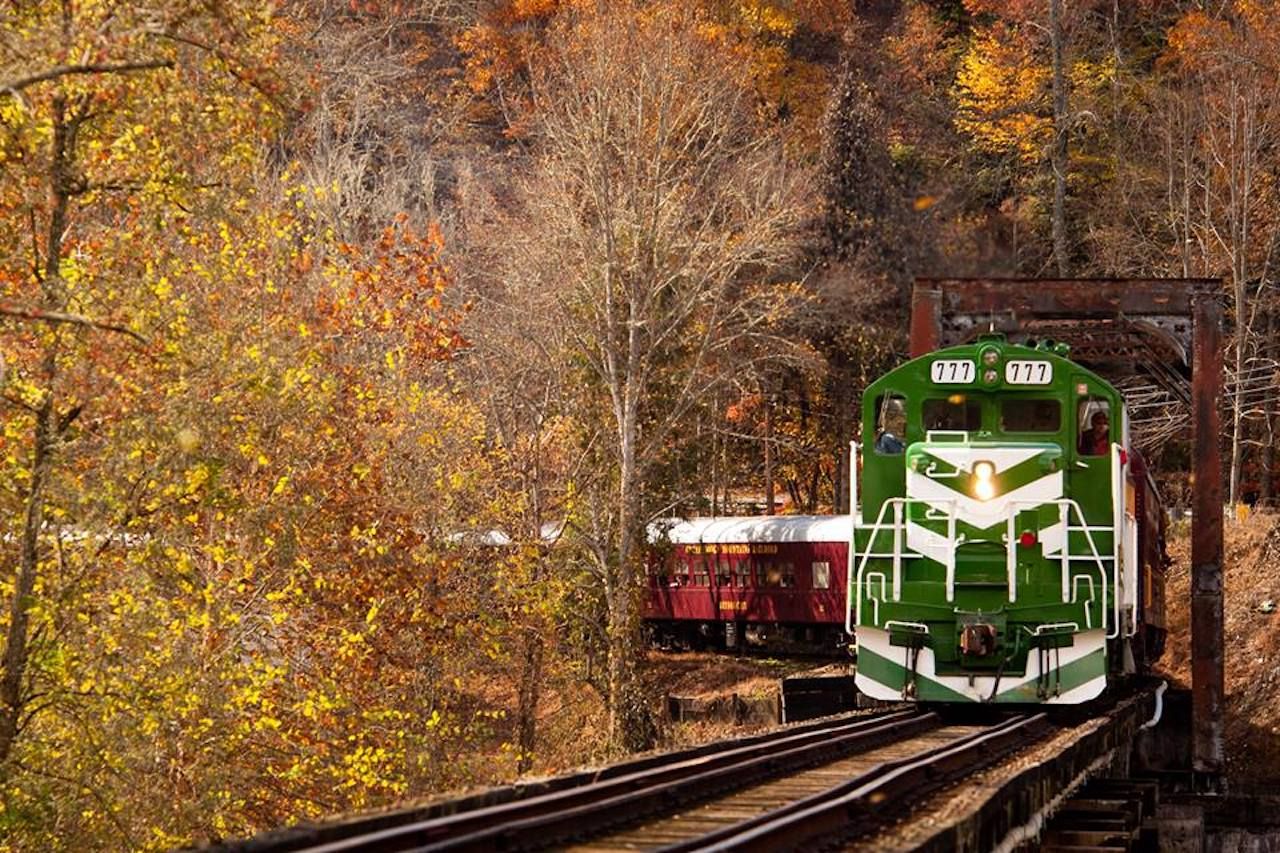 This quintessential southern leaf-peeping train ride goes through the colorful hills of western North Carolina. Go in October and you can catch the Nantahala Gorge Excursion, a 4.5-hour trip along the Tennessee and Nantahala Rivers, across the historic Fontana Trestle bridge, and to the vibrant reflections off Fontana Lake. You can also take trips that include beer tasting at a station along the way or take your kids on the Peanuts Pumpkin Patch Express. 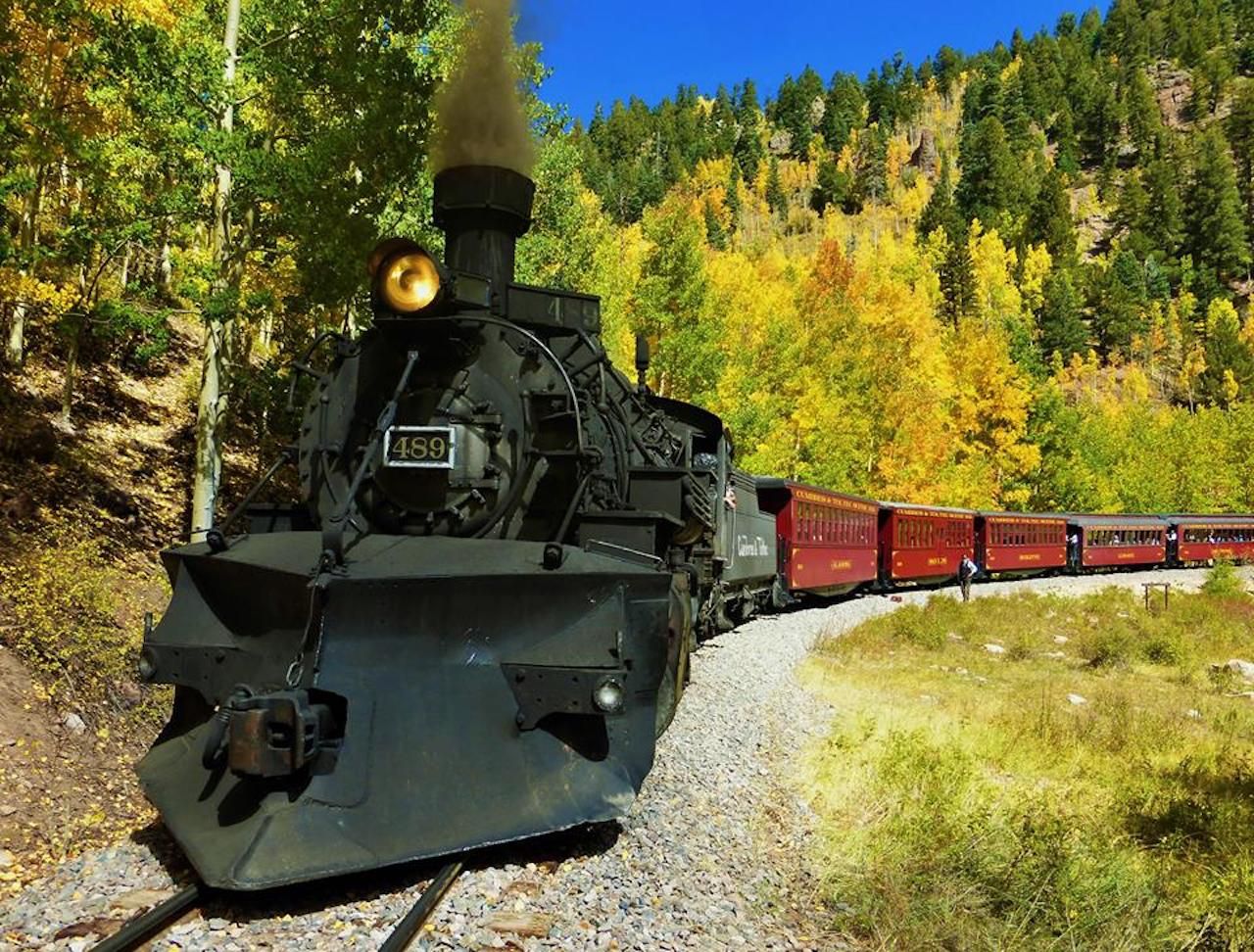 The American West doesn’t get a lot of credit for its fantastic fall foliage, what with the abundance of evergreen trees and sprawling desert. But this ride with Combres and Toltec through the Rockies in New Mexico and Colorado is one of the most stunning rides in the United States any time of year. You’ll see plenty of colors in the desert foreground through the Toltec Gorge and across Combres Pass — the highest pass reachable by rail in the US. The train speeds past little Western towns and towering mountains, across a sheer rock face and into tight loops. The ride is so picturesque it was actually featured in Indiana Jones and the Last Crusade. 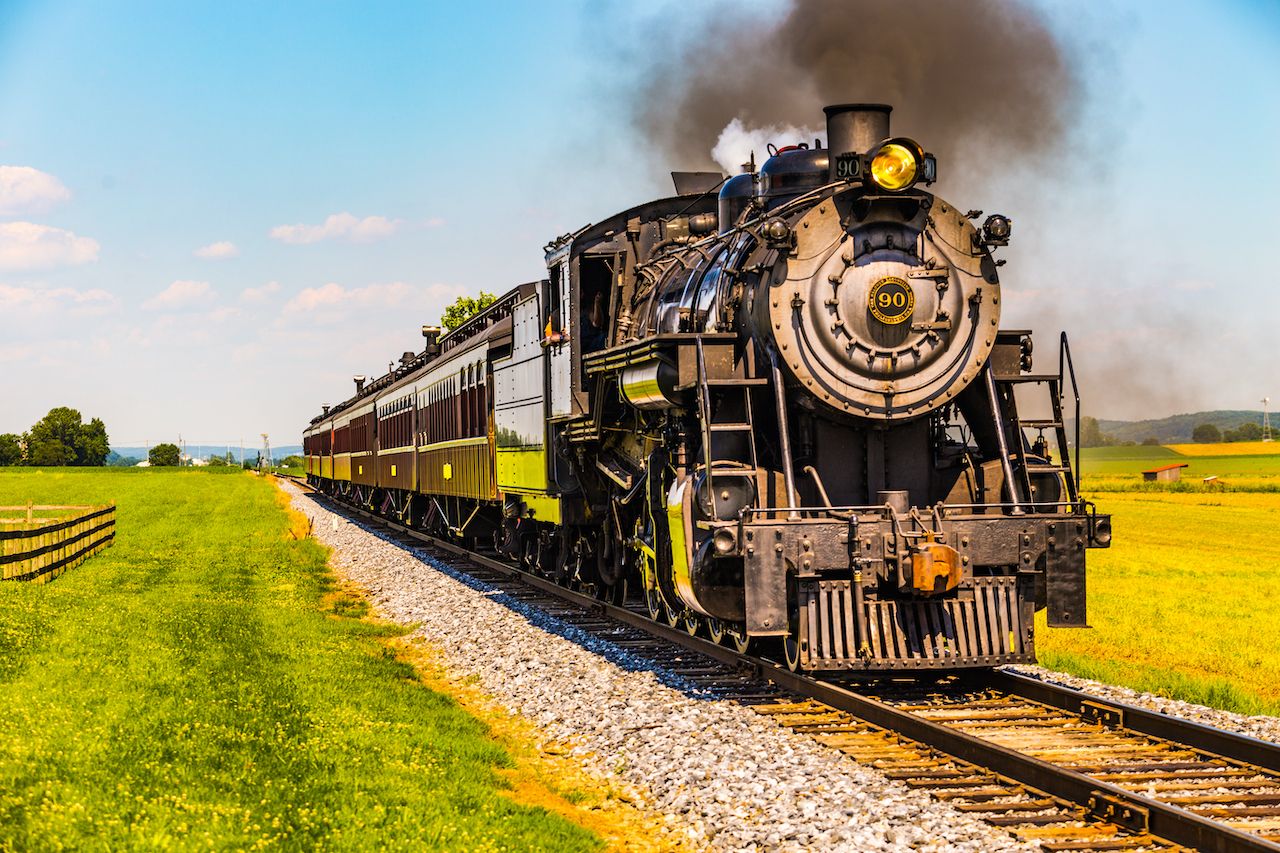 While the kids would surely rather journey on the Strasburg Railroad’s Thomas the Tank Engine replica, adults may be more interested in the first-class cars of the historic locomotive, instead. This brief trip through Pennsylvania’s Amish country offers rides done up in Gilded Age extravagance. 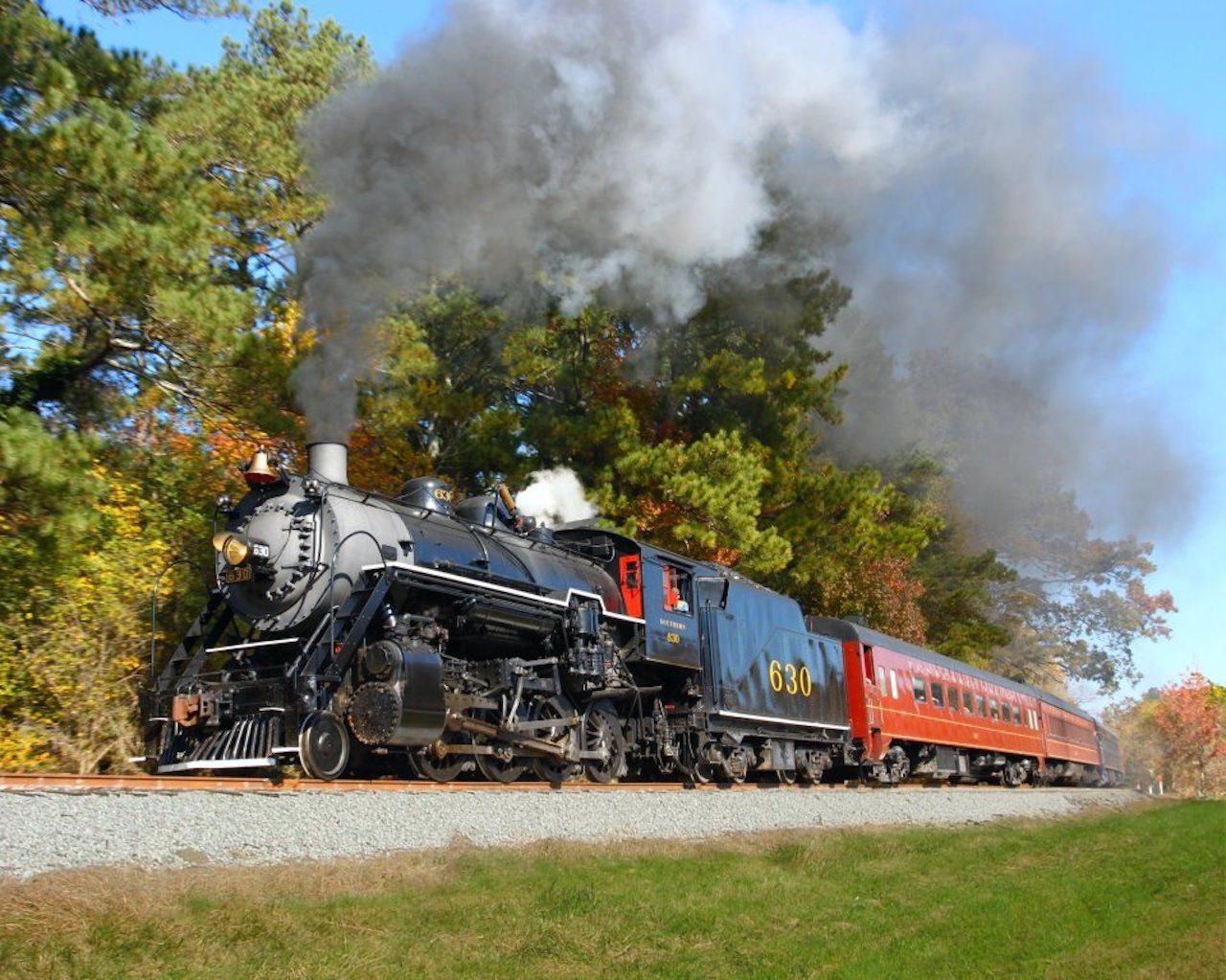 The most popular ride in the town famous for its choo-choo is the Missionary Ridge Local, a 65-minute ride over four bridges and through a mid-19th-century tunnel. But to really get the most of the fall colors in this area, opt for the Hiwassee River Rail Adventure (AKA Hiwassee Loop), which takes you on a longer ride through the Cherokee National Forest, surrounding you with brilliant leaves and thick foliage. 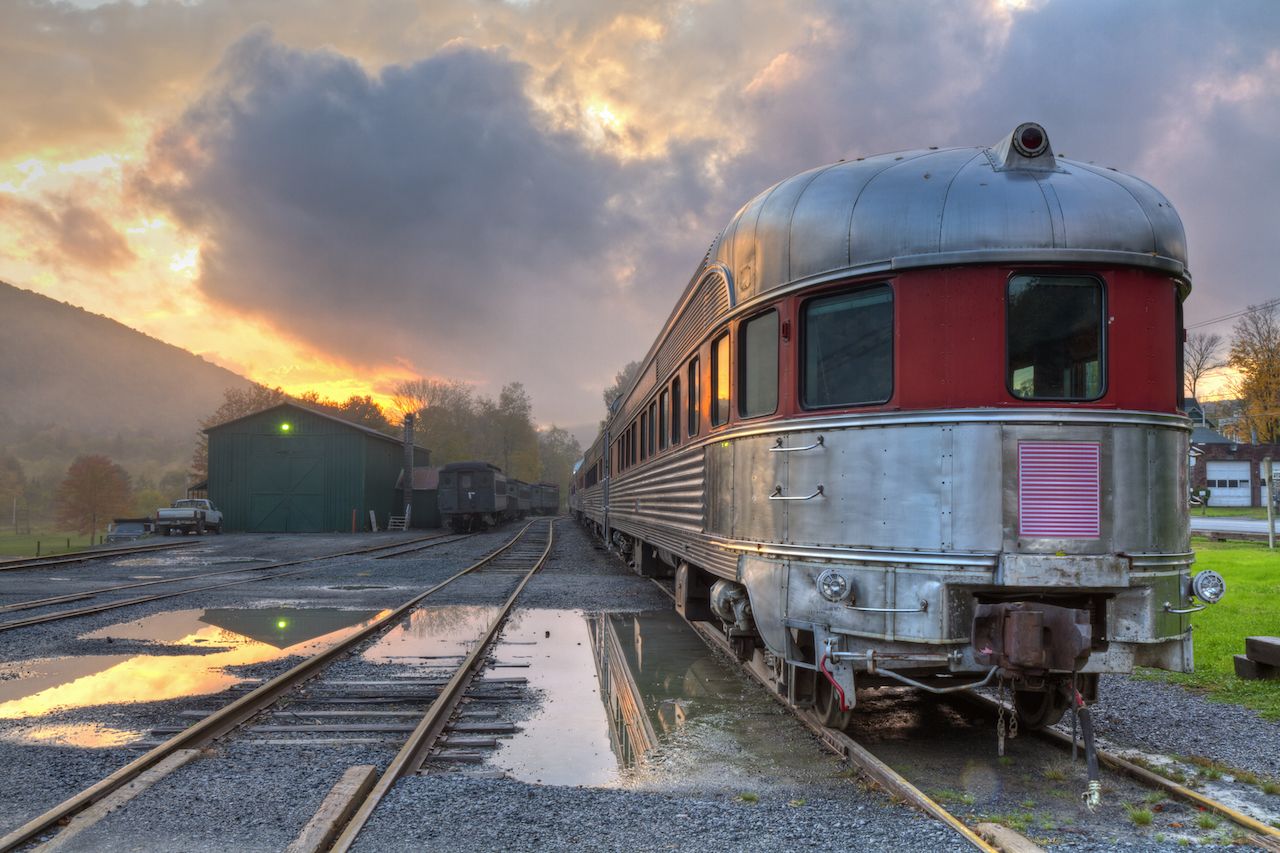 This calming trip through the Catskills seems to traverse a storybook setting over rustic bridges, bubbling streams, and through colorful valleys — which makes sense as the Delaware Ulster Railroad‘s trademark ride is the Rip Van Winkle Flyer, which features a glass-domed dining car and meanders through the haunts of the most famous sleeper in history. Events with this railroad include the Taste of New York trains, where you can sample a whole ride’s worth of local food and beverages, and train-robbery rides set against some of the most spectacular fall backdrops in the US. 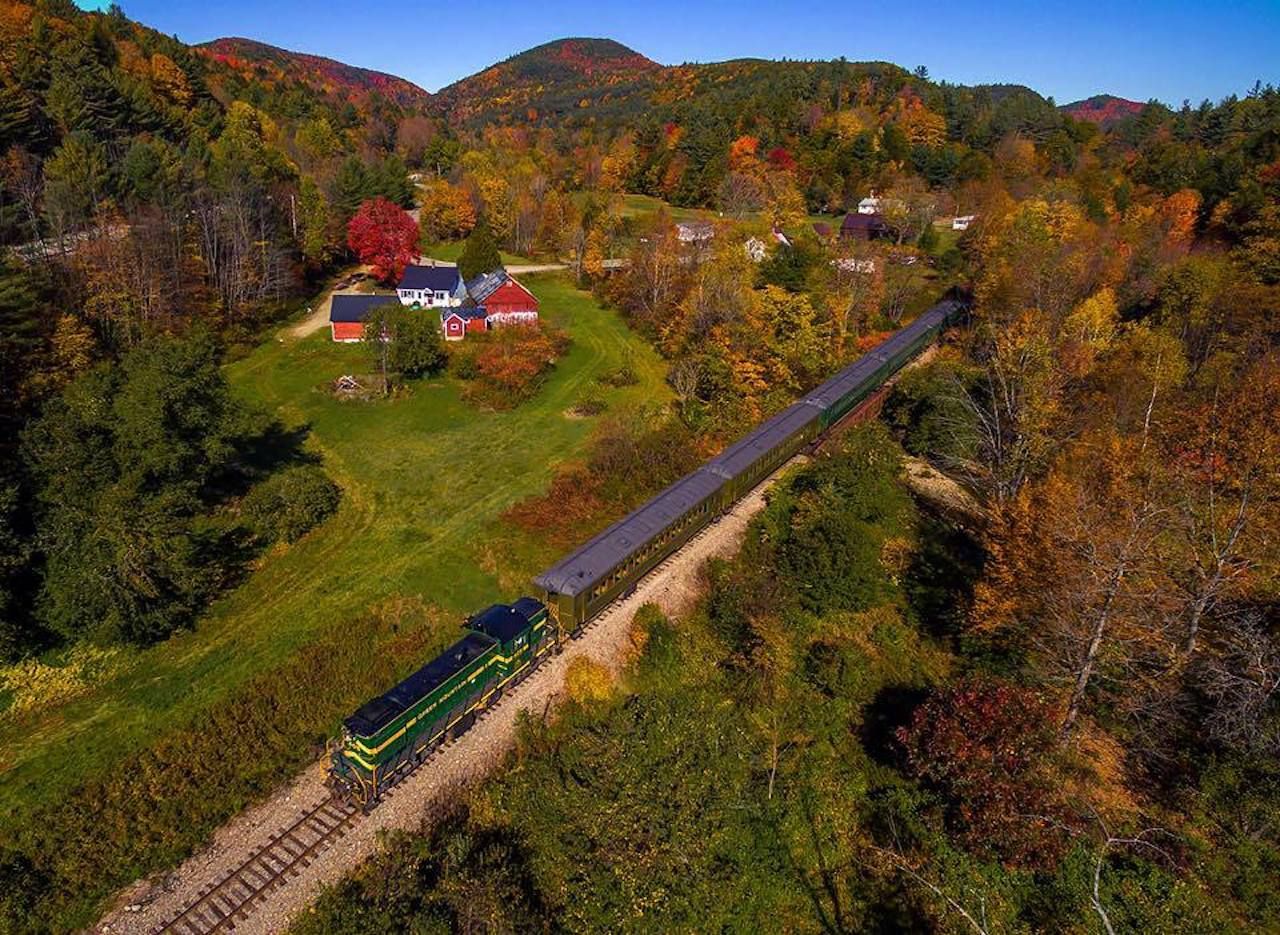 The most scenic five weeks in Vermont are during leaf-peeping season, and the Green Mountain Railroad operates five days a week, so you can see it all by train no matter when you go. The most popular ride is the three-hour fall foliage excursion, chugging to the top of Ludlow Mountain for the best perspective on the scenery. Weekends bring Lounge 91 rides from Burlington to Middlebury, where the passing bright colors get a live music soundtrack. Saturday and Sunday nights, you can also enjoy a three-course gourmet meal on Green Mountain’s dinner train. 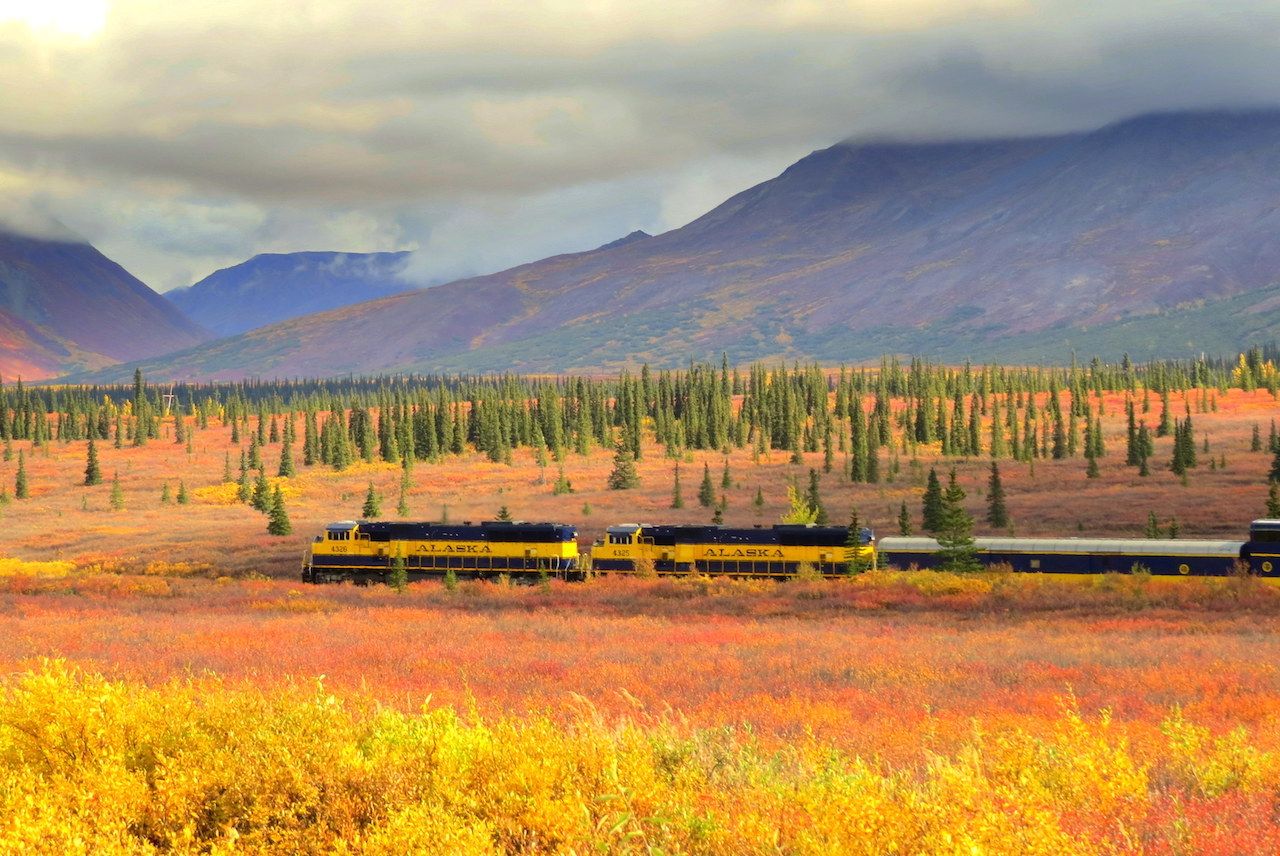 If you want to get a jump on the fall colors and don’t feel like waiting until it interferes with college football, head to Alaska where this train runs through the fall colors of Denali National Park starting in summer. The 12-hour trip on the Denali Star to Fairbanks stops in Wasilla, Talkeetna, and Denali National Park. And on clear days, you’ll see all those fantastic leaves fronting the snow-capped peak of the tallest mountain in the US at Denali.

Wanna take your transportation throwback game to a whole other level? Head out to the Connecticut River Valley and take this 19th-century steam strain through the bright rolling hills, THEN combine it with a ride on a riverboat down the Connecticut River. If that kinda time warp is just a little too much for you, the Essex Steam Train also offers pumpkin patch trips and Haddam Swing Bridge specials all autumn long. 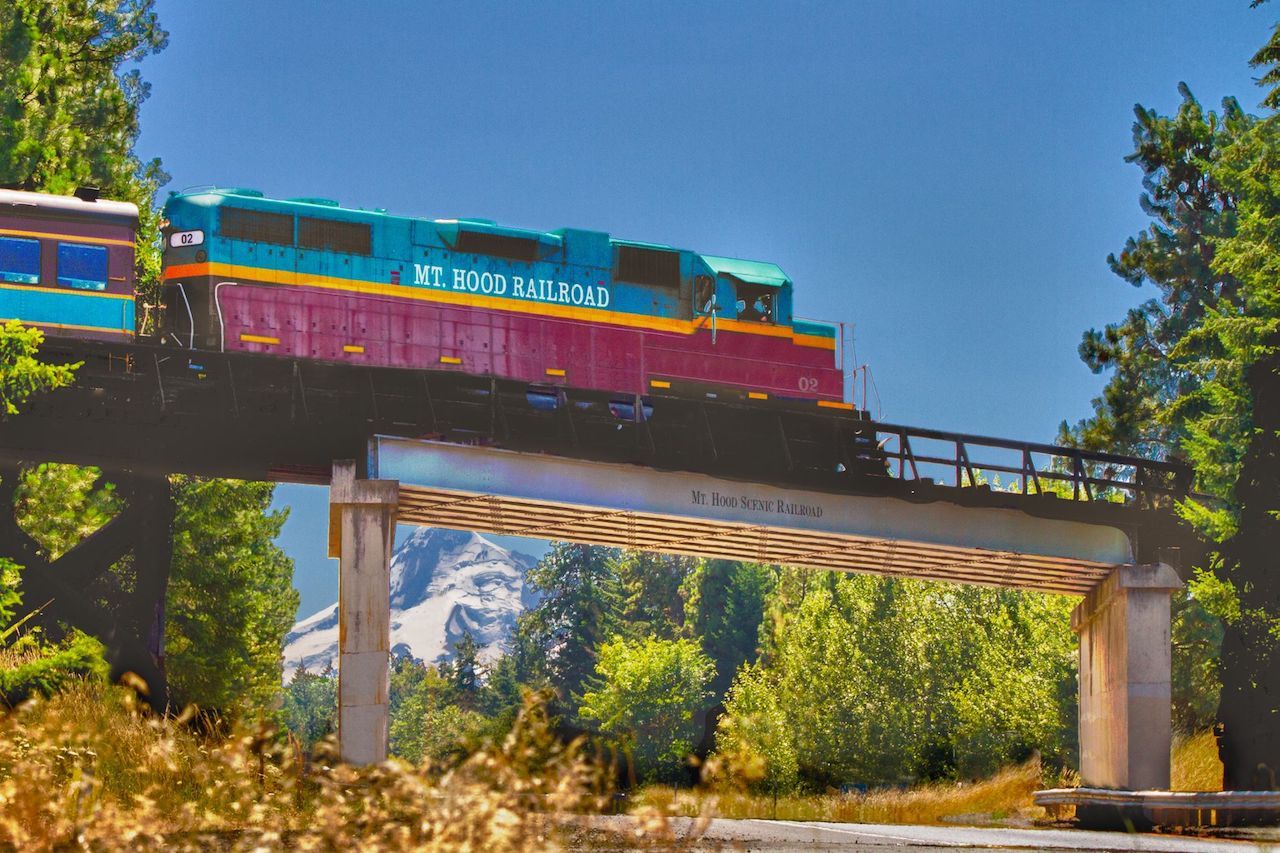 The Columbia River Gorge is one of the nation’s scenic highlights any time of year, but the blue waters of the river shine especially bright when set against the oranges, yellows, and purples of autumn. Mount Hood Railroad is among the most Instagram-friendly on the list, too, with scheduled photo stops along the way. Plus you’ll get to sample a collection of local craft beers — one of the other biggest draws to this region. 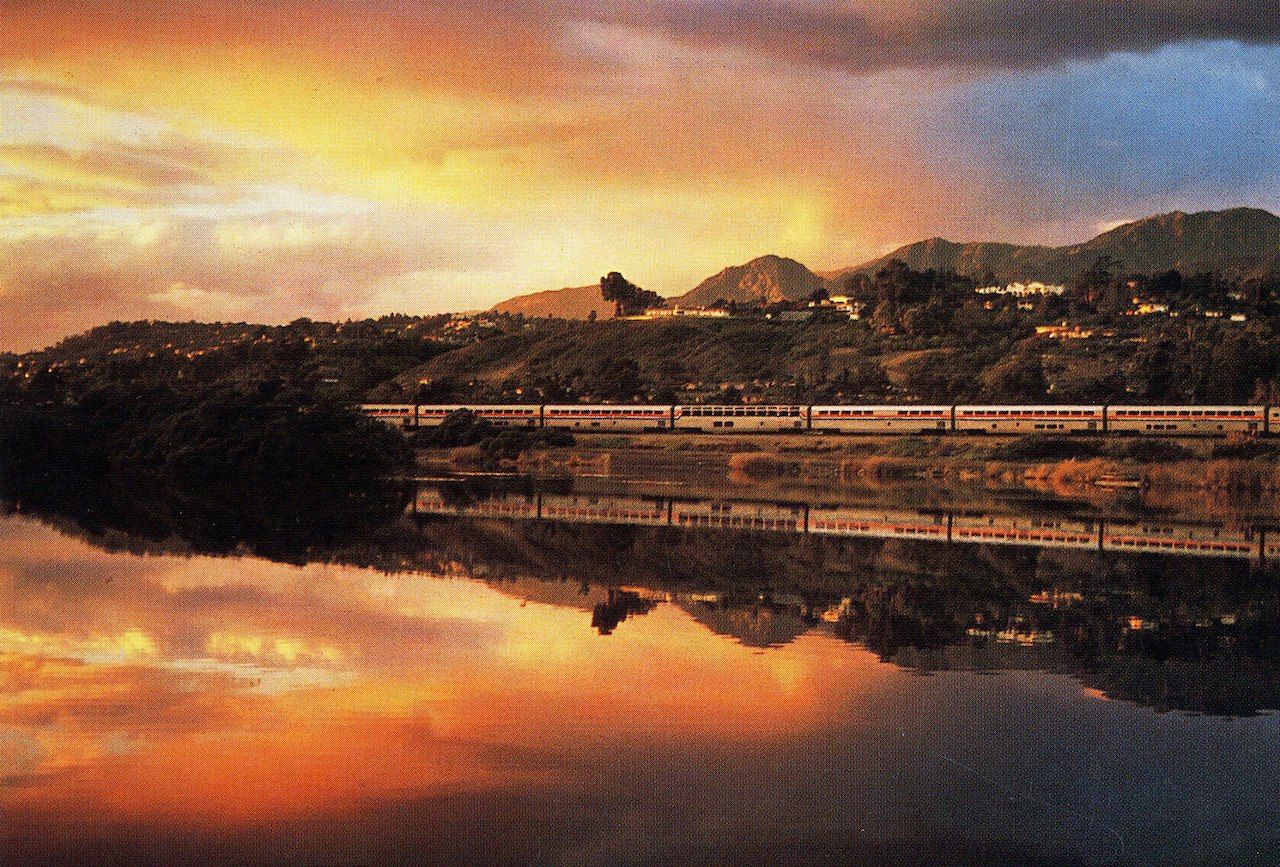 If you’re looking to make an entire vacation out of looking at leaves from a rumbling train, hop aboard Amtrak’s Coast Starlight. The eight-day trip gives you ample time to discover the fall colors of Muir Woods near San Francisco, then venture up the West Coast to Portland, where you’ll have a day to cruise the Willamette Valley and see the colors there. Then it’s up through the towering trees of Washington to Seattle, where the changing colors at the Washington Park Arboretum make you forget you’re in a place called the Evergreen State. 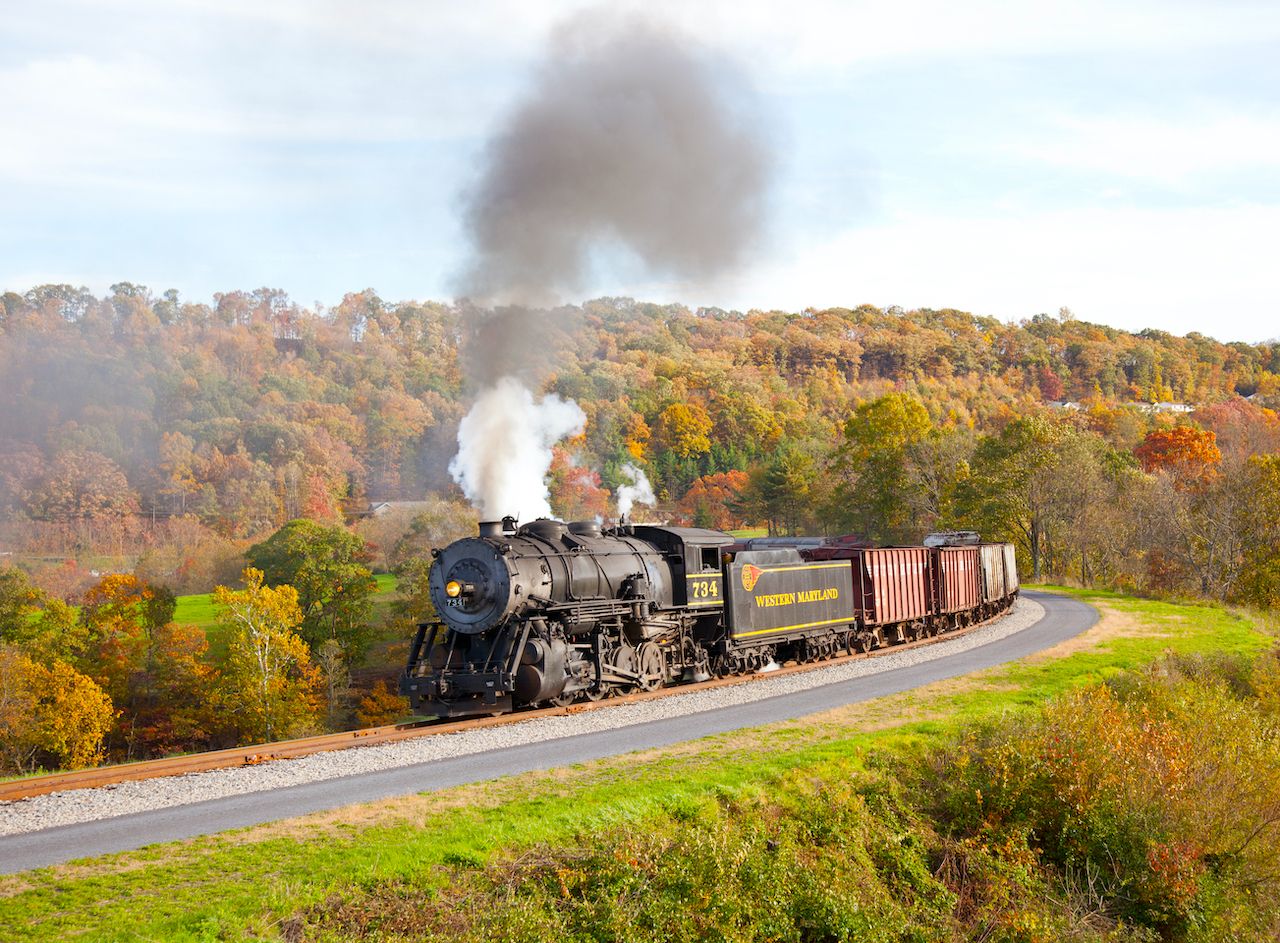 Maryland screams all-you-can-eat crab cakes, not all-you-can-peep foliage. But come fall, the Allegheny Mountains will leave you speechless, same as any other range belonging to the East Coast’s expansive Appalachians. Take a spin on Western Maryland Scenic Railroad’s Frostburg Flyer to see iconic sites like Helmstetter’s Curve and the 914-foot Brush Tunnel look even more dramatic against the changing leaves. In all, the Cumberland-Frostburg loop covers takes 4.5 hours. Splurge on the club car if you want to travel forward on the tracks but back in time: the deluxe service is 1950s-themed, complete with a carful of servers dressed to match. 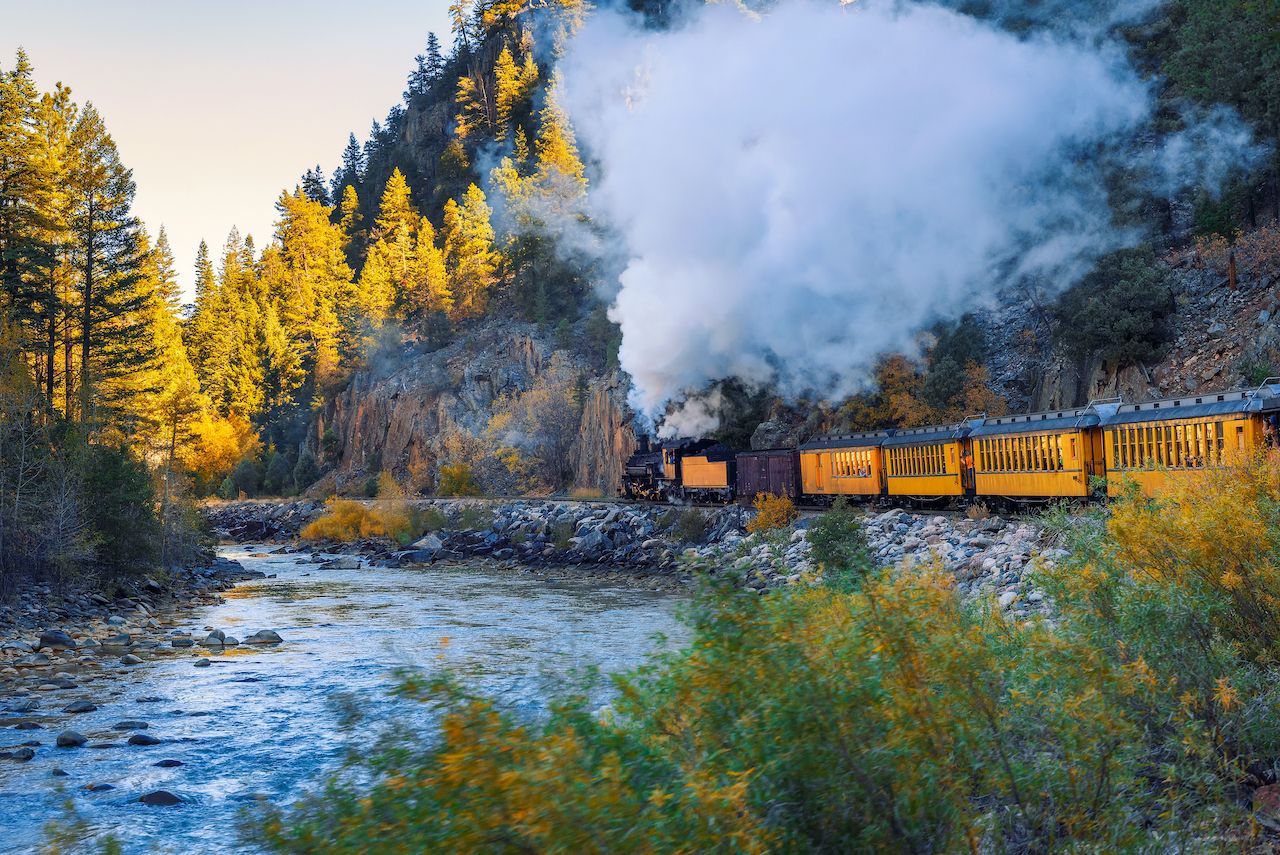 Normally, it’s near-impossible to say which of Colorado’s seasons is most spectacular. Spend a couple of hours hugging high-altitude passes in San Juan National Forest in September or October, however, and you’ll be sure that season is fall. The Durango & Silverton Narrow Gauge Railway tours the best of Colorado’s southwest, much of it inaccessible to other vehicles. Hop on the Canyon Express at Rockwood Station just north of Durango, cozy into a restored 19th-century coach or open-air gondola, and try not to blink until you reach Cascade Canyon.

National ParksThe Best Fall Foliage Trips To Take by Bus in the Northeast
Tagged
Train Travel Insider Guides United States
What did you think of this story?
Meh
Good
Awesome