California has always been America’s capital of quirk. Sometimes it manifests itself as bizarre roadside attractions in the desert. Sometimes it’s spending a weekend learning tantric sex. Whatever the reason, the creative spirit of California runs deep, and that extends to the world of hotels too. Whether it’s airstream trailers set out in the desert or a wine country retreat with classic cars in your room, the state has some altogether unusual places to stay. Here’s a look at 10 California hotels with the most personality.

The Victorian Mansion in Los Alamos 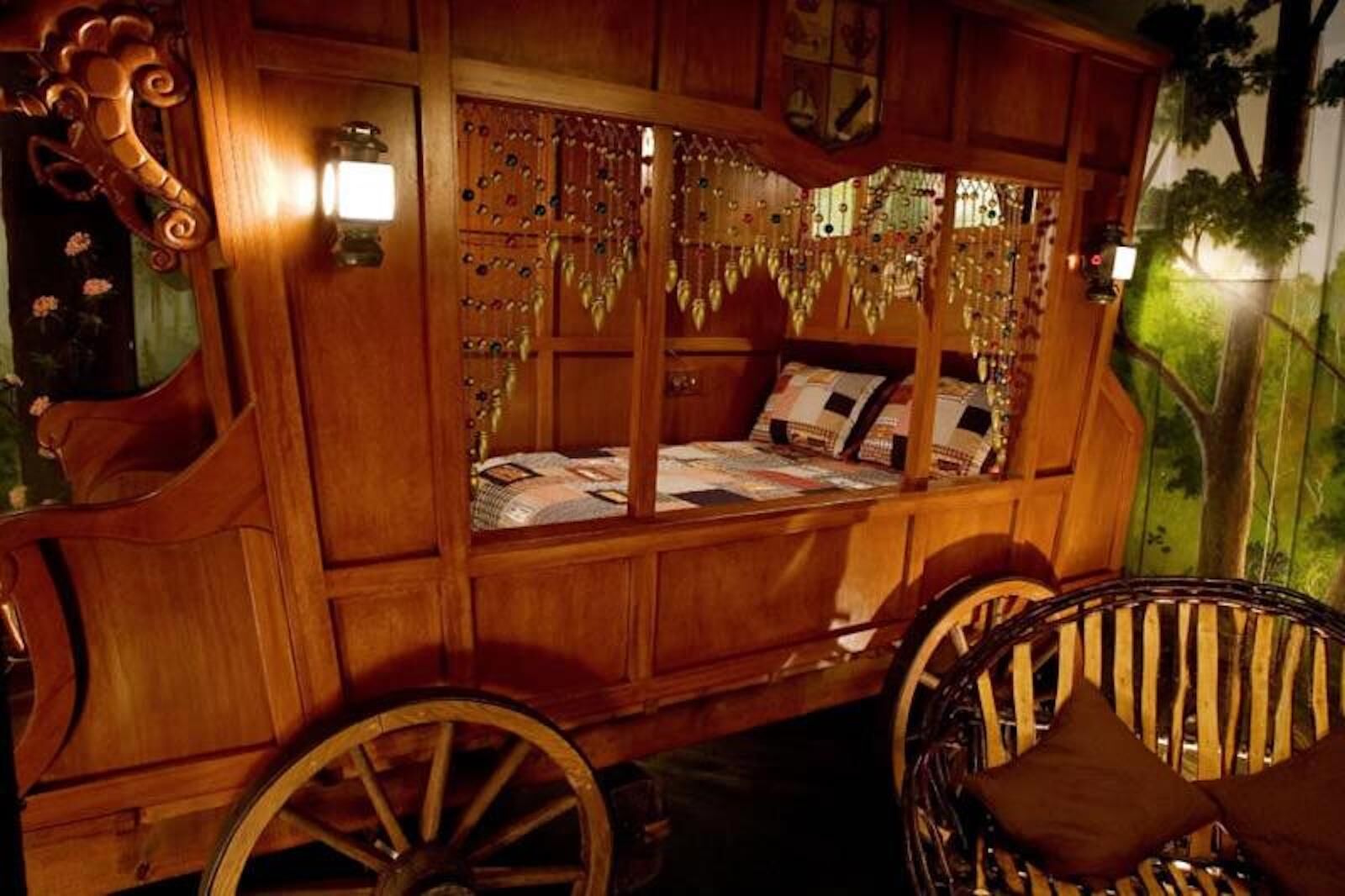 Themed suites aren’t anything new in the world of wine country bed and breakfasts. But themed suites with classic cars for an ensuite drive-in movie? That’s only at “The Vick,” which has 1950s-themed rooms that offer said drive-in, plus old diner tables, a snack bar mural, and a bathroom with 1950s-style graffiti. Other suite themes include the captain’s quarters of a pirate ship, a weekend in Paris, and a Roman empire room where your bed is a chariot. The hotel also offers wine tasting packages through Santa Barbara, and in-room massages should the need strike.

Trailer parks get kind of a bad rap, what with all the tornadoes and exploding meth labs. This one deep in the California desert, however, makes the trailer park cool with a family of airstreams surrounding a shuffleboard court, swimming pool, and plenty of Astroturf. The cozy trailers range in theme from space alien to horror movie, some with kitchens, some with no bathrooms. The setting is so unusual it’s rented out for photo shoots almost as much as for overnight lodging. Need more convincing? Lana del Rey thought enough of the place to shoot her video for “White Dress” there. 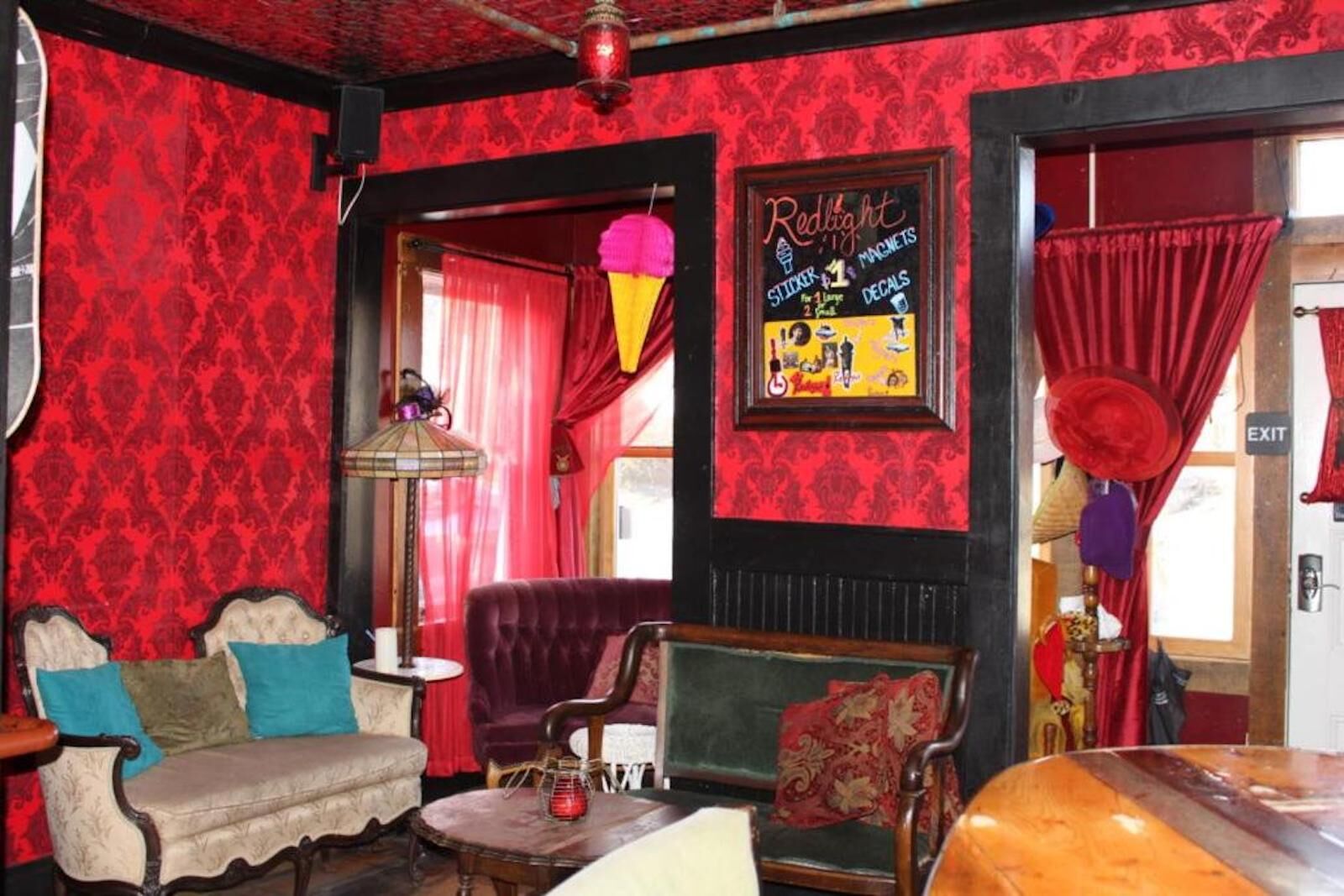 It’s one thing to take an old brothel and rehab it into a boutique hostel. It’s quite another to take original windows, doors, and other fixtures and recreate the experience as legally as possible. That’s the gist of the Redlight, which has a ground floor bordello-themed cocktail lounge that feels like a trip back to California’s rough and tumble mining days. The rooms are hostel-style, which means shared bunk rooms and privates all adorned in crimson curtains to keep with the theme. The lone studio apartment is covered in a local, nature-inspired mural with dark wood furniture and red floors. Downstairs, the bar includes red velvet wallpaper, the same style discovered on the wall during renovations.

Luxury yurt living with stunning views of mountains and water isn’t reserved for the depths of Patagonia. You’ll also find it in Big Sur at this cliffside glamping resort. Each yurt offers an ocean view, and though they don’t have private bathrooms everything is a pretty short walk away. The biggest draw, however, isn’t the yurts but the “human nest” campsite — a perch crafted from spiraling tree branches by a local artist. The food isn’t simple camping food, either, with a full-service sushi bar onsite and gourmet restaurant serving three course dinner nightly. 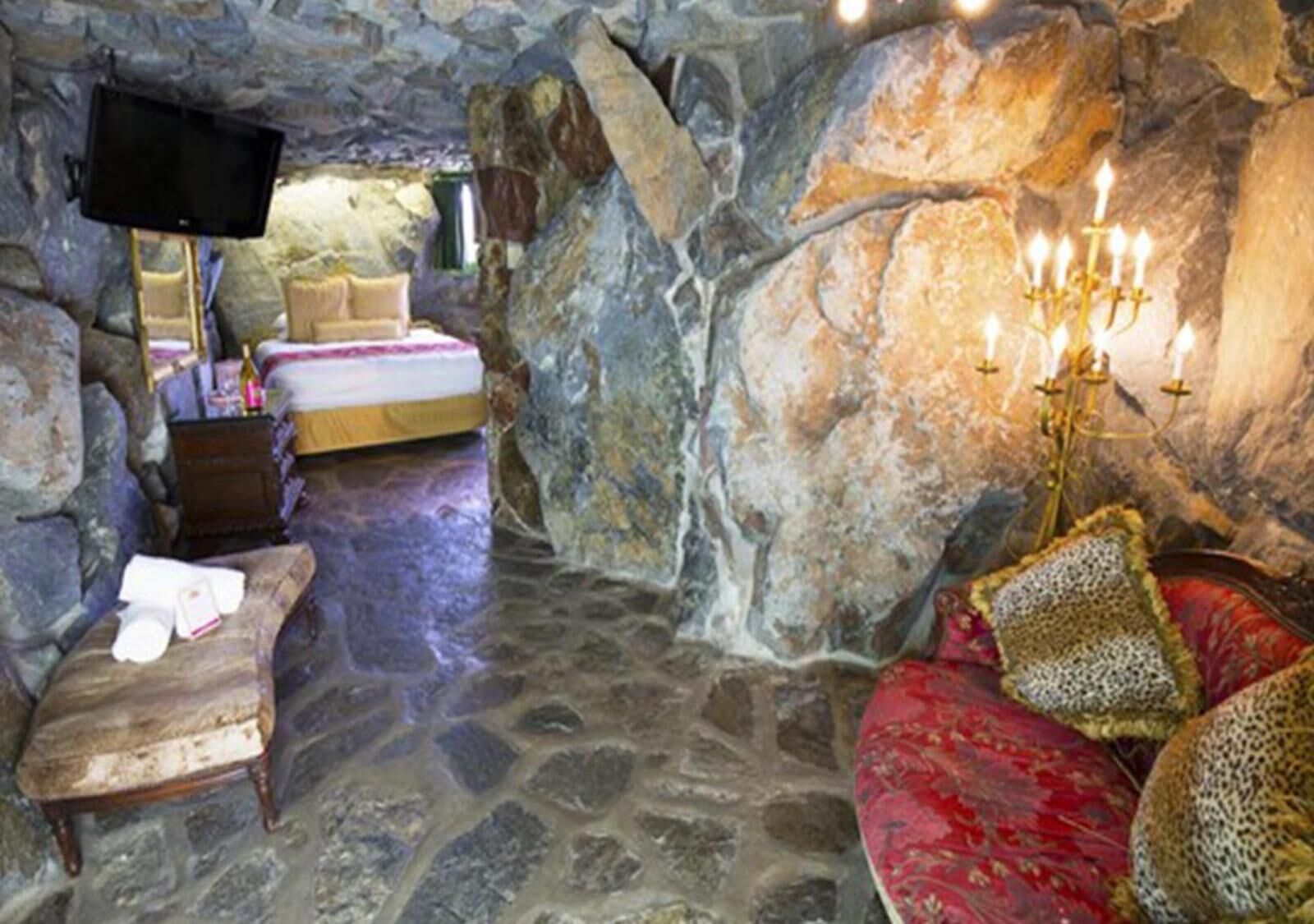 The inside of this palace along the California coast brings to mind the video for “Material Girl.” But despite its abundance of pink, the hotel isn’t named for the pop star or the Virgin Mary. It gets its name from founders Alex and Phyllis Madonna who built the place in the 1950s. The outside brings to mind storied gilded age hotels, like the Claremont in Berkeley or the Grand in Mackinac Island. But the interior is a strange journey into mid-century kitsch and creativity, with 110 themed rooms and rock waterfalls, spiral staircases, and impeccable design. They’re an appetizer for the main course at the Gold Rush Steakhouse, a posh meat palace done up in oversized pink booths and gold trim. You’ll also find a bakery making over-the-top cakes onsite, and a beach-entry cool complete with its own waterfall. As anyone who has been before knows, you should be sure to check out the world-famous bathrooms.

The West Coast outpost of the Kate’s Lazy Meadow in the Catskills is a collection of artist-designed airstreams just outside Joshua Tree National Park. Each one feels like setting up a trailer in your own private corner of the desert, with themes ranging from tiki to Alaskan. The most recognizable, however, is the “Hairstream” trailer, a trippy tribute to the tour bus days of the B52s. This might seem a little superfan creepy, until you realize Kate of Kate’s Lazy Desert is Kate Pierson, who you may remember from her atomic hairdo and the vocals for “Love Shack.”

The Saguaro in Palm Springs 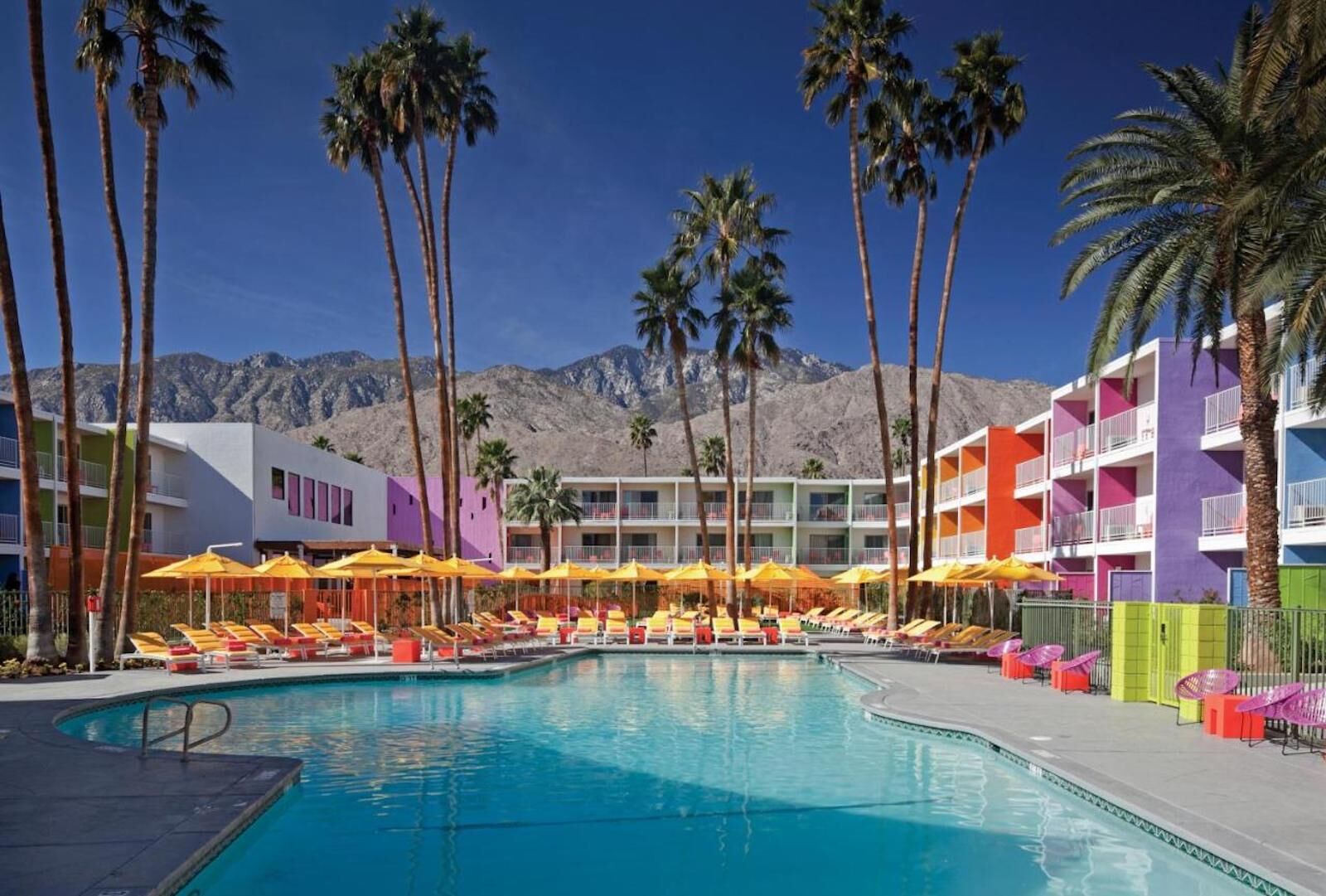 If you’ve seen pictures of Palm Springs pool parties, or unique photo shoots with colorful hotel doorways against a towering desert mountain backdrop, then you’ve seen the Saguaro. The hotel has become a symbol of the city, a mid-century gem done up in rainbow hues that match the desert sunset. Rooms are awash in bright colors too, evoking a sort of cartoonish Roger Waters version of the 1950s. Its unusual style has made the Saguaro a destination for pool parties, and if you’re in town for the weekend you’ll likely end up here at some point sipping cocktails.

Rows of red cabooses sit neatly inside a grove of oak and pine trees, almost as if an abandoned train had been left in the middle of the forest. But these vintage Santa Fe railroad cars aren’t relics of a long-forgotten derailment. They’re themed trains that transport you from Casablanca to a Caribbean beach house without ever getting on a track. The nine cabooses are each experiences of their own, some with private hot tubs and individual bars. The signature feature – aside from the whole “being inside a caboose” thing – are the goose down featherbeds that make for a legendary night’s sleep. The property also has its own boat ramp and beach, and is only a short drive to the heart of Lake County wine country. 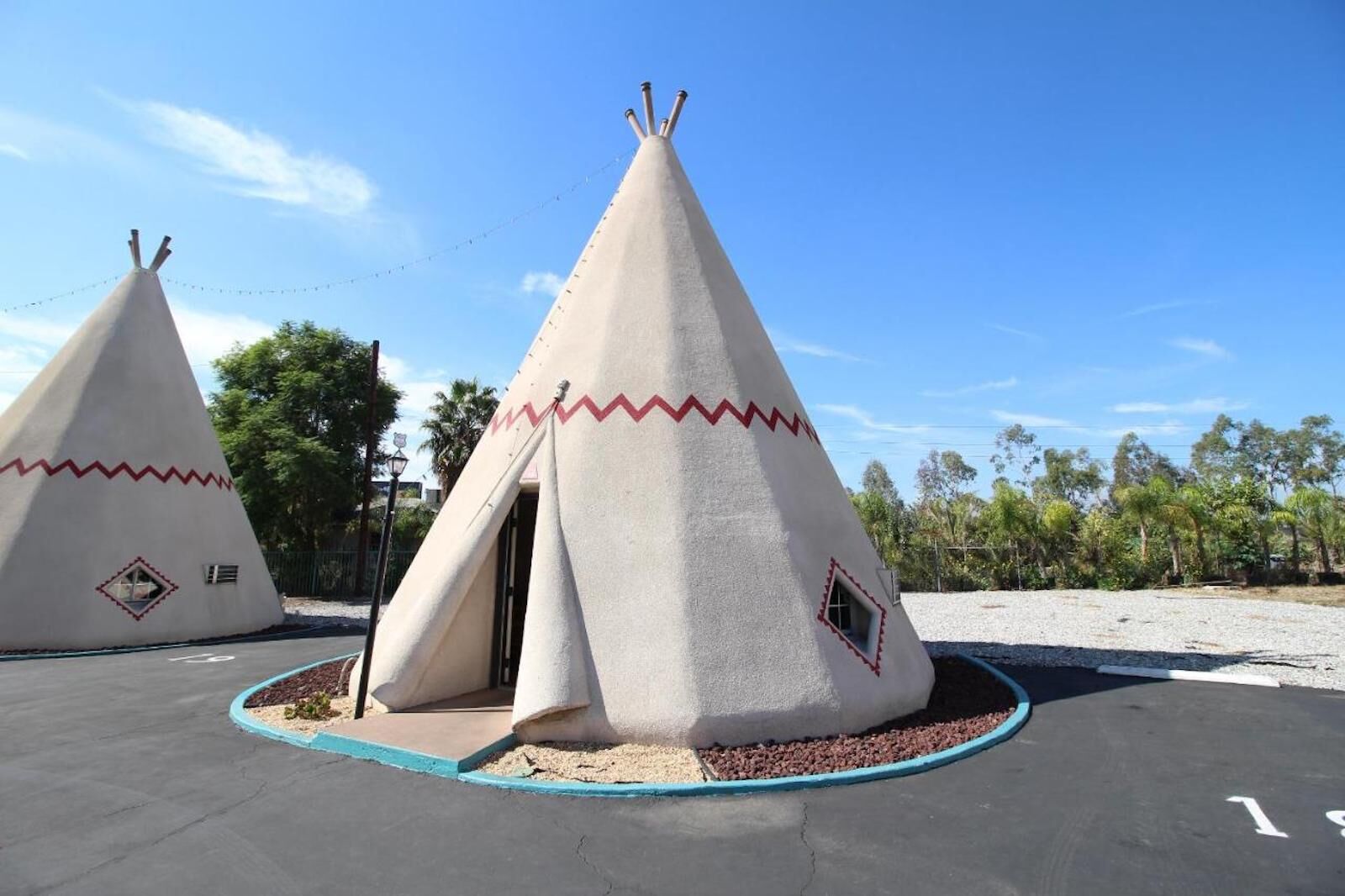 During the dawn of the American road trip, few symbolized the Route 66 experience like the chain of roadside Wigwam motels. One of the three that remain sits just inside San Bernardino, where 19 individually appointed wigwams welcome road-weary travelers. Inside, they’re basically motel rooms, with some western touches like wagon wheels and Native American-inspired décor. The Wigwam is also the rare Route 66 motel with a swimming pool, where you can lay out in the sun surrounded by tee-pee relics of a bygone era. 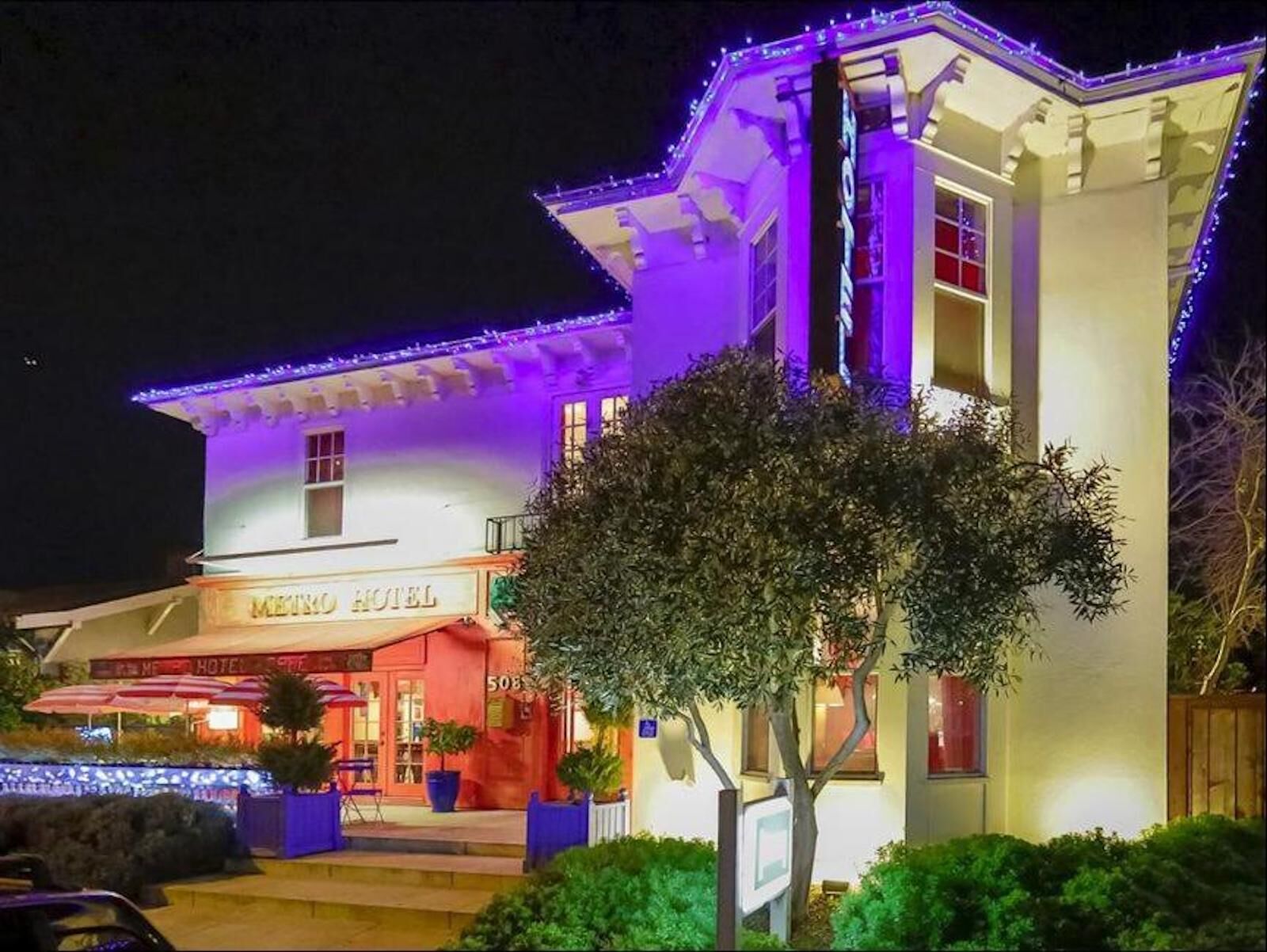 When the Metro Hotel tells you it’s “a little trip to Paris in Sonoma County,” it’s not an exaggeration. Most of the objects that occupy the rooms and common areas, from the trademark goose lamps to the eclectic collection of gnomes, came from flea markets the owner frequents in France. Walls in the rooms are adorned in vintage French school posters, and the café-style dining room indeed evokes a Parisian vibe. You’ll find quizzical objects everywhere at the Metro, whether it’s a doll in a French maid’s outfit or a plastic flamingo outside one of the hotel’s airstream trailers. There’s also a full crepe breakfast every morning, to put the finishing touches on your Californian trip to the continent.

Art + ArchitectureThis Chic California Hotel Has a MET-Worthy Art Collection
Tagged
Epic Stays
What did you think of this story?
Meh
Good
Awesome

The Steep, Staggering Hikes You Need To Do in Palm Springs This Winter

The Newest Hotel in Palm Springs, Fleur Noire, Is a Spot Everyone Needs To Know About

Work From Big Sur: The Best Long-Stay Airbnbs To Work From Home

Best US Ski Resort Upgrades for 2012

May 31, 2022 Suzie Dundas
✖
travelstoke
Download the mobile app
stoked by