Iceland is a country made for road trips with stops like waterfalls, glaciers, and volcanic craters that you can drive up to along the main Ring Road. While these often-photographed natural wonders are well worth the visit, there is a whole other side of Icelandic life filled with small fishing villages, geothermal pools, and wildlife sightings that many people miss. You might have to get off the main road in order to find them, but these small towns offer a glimpse into the slower-paced Icelandic lifestyle where nature is front and center. From a small town that has the best seal-watching, to the remote village that is home to the Queen Elf of Iceland, these seven places prove why in Iceland, it’s best to take the scenic route. 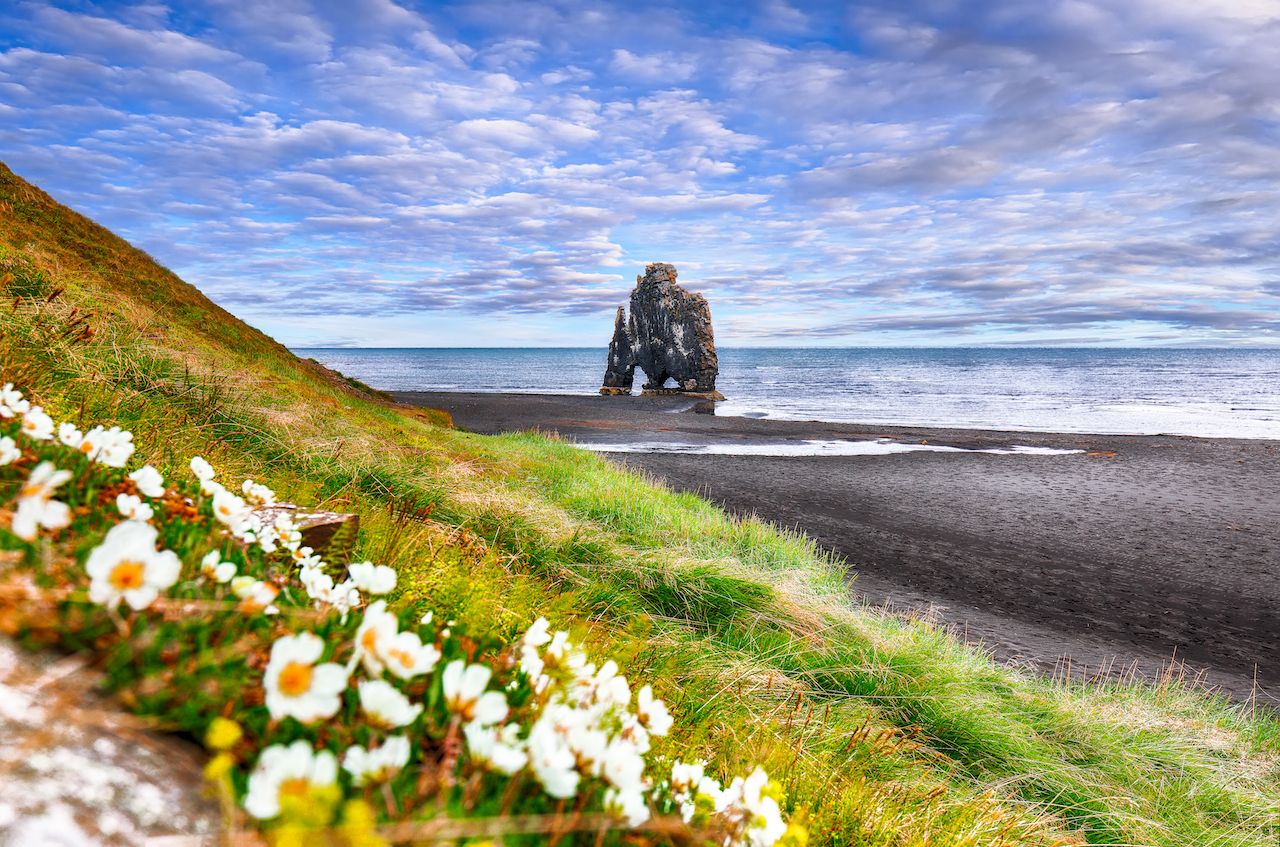 This town of Hvammstangi was a trading post in the mid-1800s and now stands as the entrance to the Arctic Coast Way, a scenic drive along the northern coast of Iceland. Before entering Hvammstangi, notice the roadside signs shaped like a seal that advertise the Icelandic Seal Center, which has exhibitions on the different kinds of seals found in the North Atlantic and Arctic region and schedules boat trips and tours to see them.

If you’re not in the mood for a tour, you can try to spot the seals from the harbor or take a short drive to Hvítserkur, a basalt rock structure that appears out of the sea in the Vatnsnes peninsula and is home to a seal colony. According to folklore, the formation was at one time a troll who turned into a rock when he got caught out in the sun. 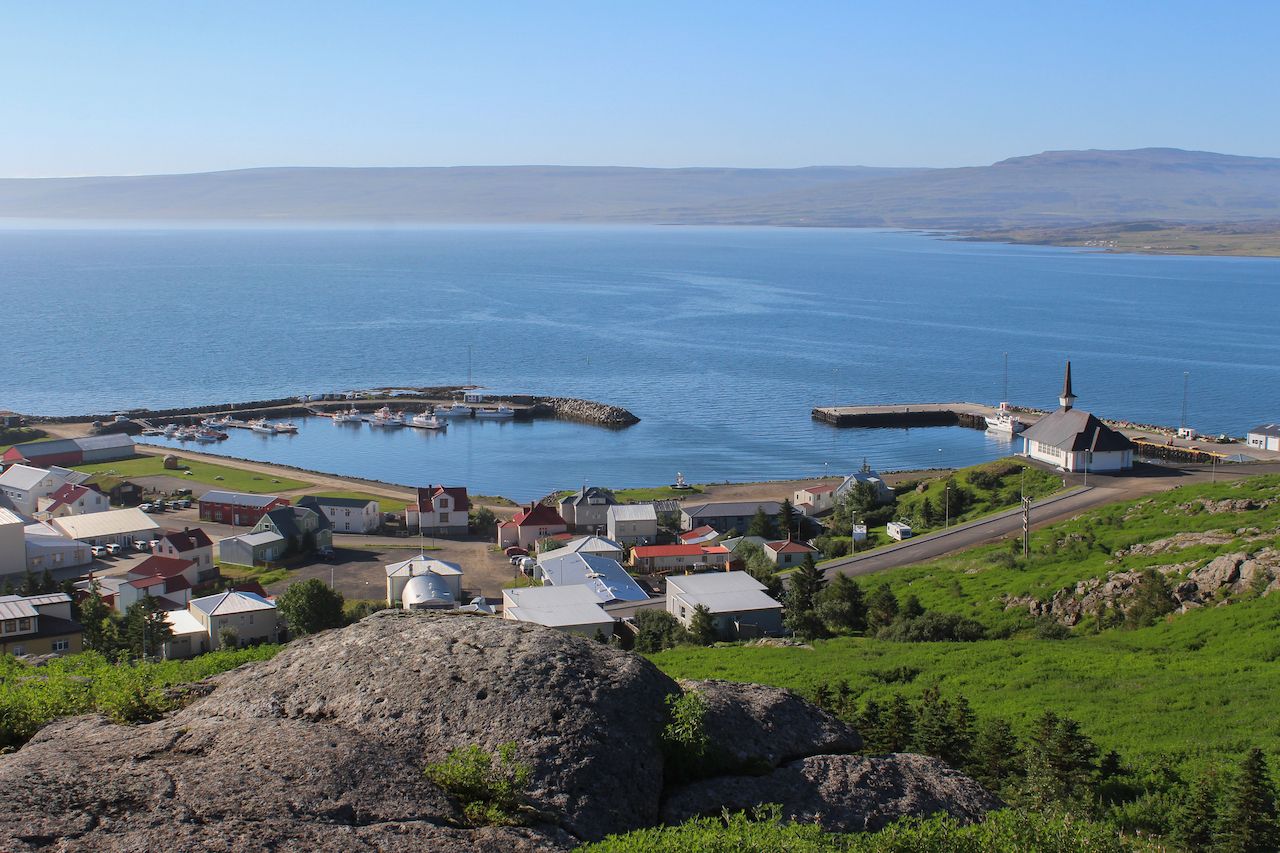 Hólmavík is a fishing village of 400 residents in the Westfjords with a past tied to witchcraft. In the 17th century, a witch hunt in the area led some to be burned at the stake. Most people who stop here do so to see The Museum of Icelandic Sorcery and Witchcraft, which shares the history and folklore of witchcraft in Iceland, like magical staves that offer protection and bizarre and unique pair of necropants (death pants). If you still have an appetite after that, the museum has a cafe that serves traditional Icelandic fare like lamb and seafood soup.

Beyond the museum, the Hólmavík campground located on a hill above the fjord is the perfect viewing location for northern lights in the winter or sunsets during the long nights of midnight sun in the summer. 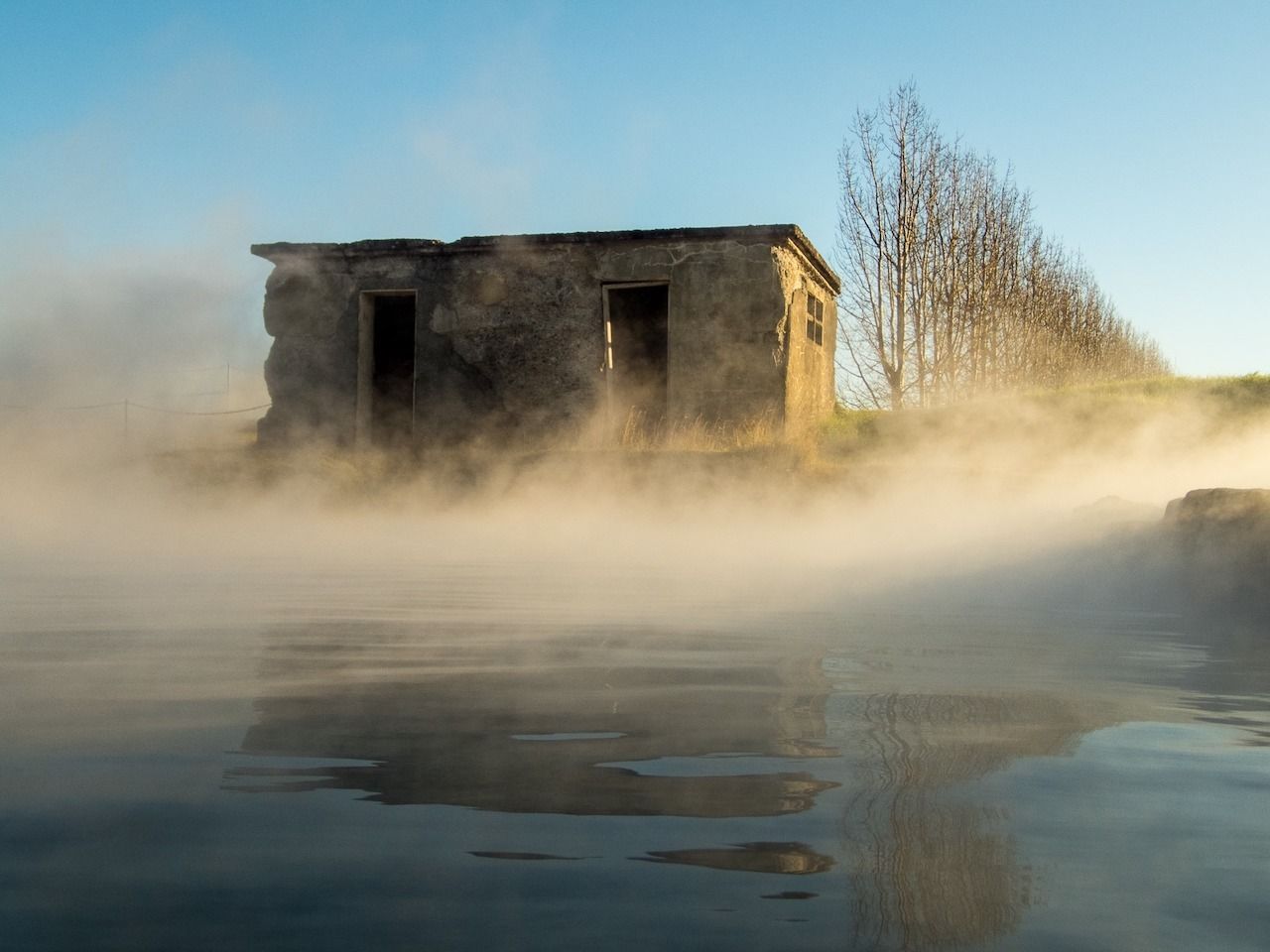 If you’re planning on driving the Golden Circle route, be sure to stop in Fluðir. Located between the town of Selfoss and the Gullfoss waterfall, Fluðir is easily spotted thanks to its many glowing greenhouses that use geothermal energy to grow vegetables year-round. One of the greenhouses, Friðheimar, lets visitors dine among rows of tomato plants. An incredibly popular place that requires booking in advance, the restaurant’s menu uses tomatoes in creative ways, like tomato ice cream and even tomato beer.

In addition to the greenhouses, the village’s hot springs feed into the oldest pool in Iceland, Gamla Laugin (the Secret Lagoon), which is a thermal pool with a gravel floor surrounded by lava rocks. Even if you decide not to go in, you can walk along a boardwalk near the pool to hear the bubbling vents and see a small geysir. 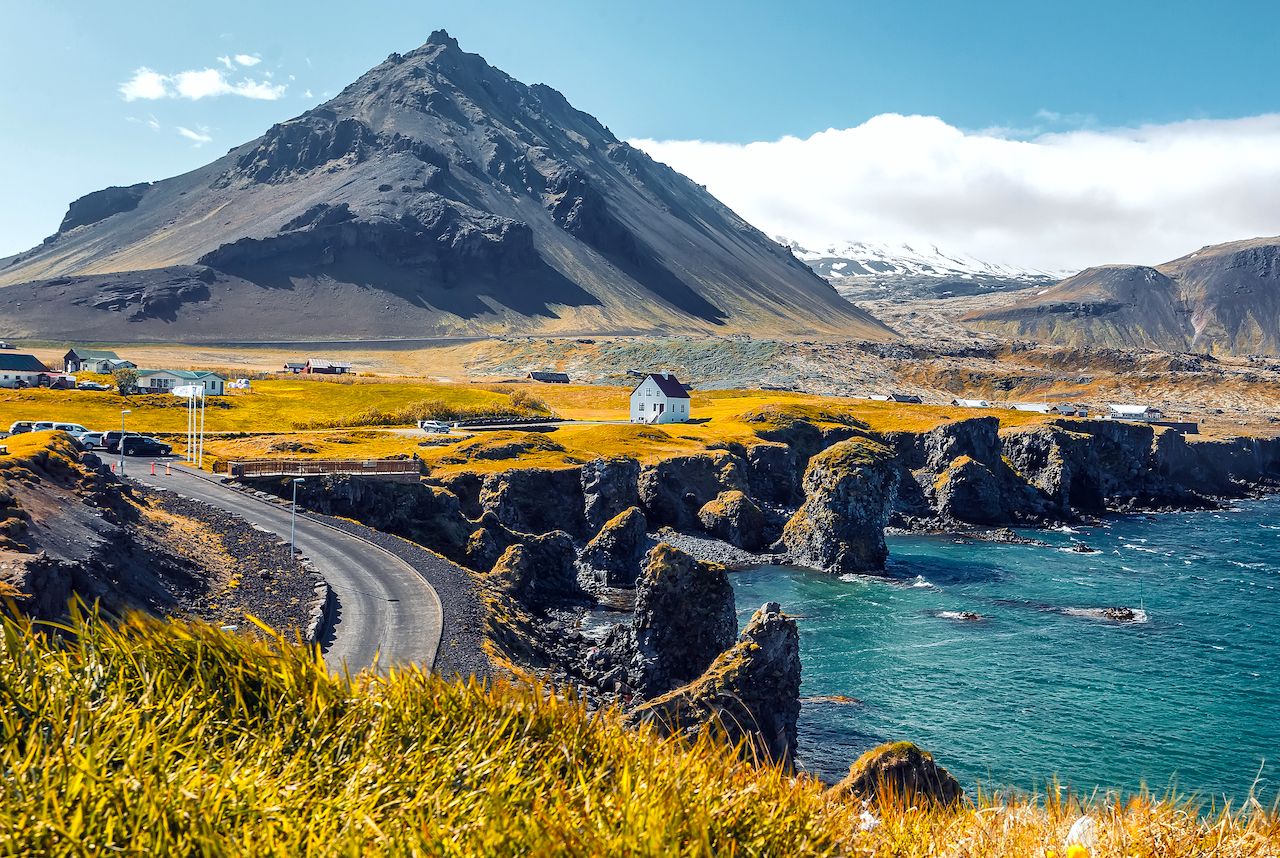 You might recognize this fishing village from the film The Secret Life of Walter Mitty, where it served as a stand-in for Greenland. Located on the Snæfellsnes Peninsula, an area nicknamed “Iceland in miniature” because it contains all of the trademarks of Iceland — waterfalls, lava fields, and a glacier — in one place. It’s only a two-hour drive from Reykjavik and can easily be visited as a day trip. From the harbor, walk up Súgandisey island, which features a small lighthouse at the top, and take in the view of Breiðafjörður Bay. Many bird watchers come here in the summer to observe the shorebirds such as kittiwakes and arctic terns. The most recognizable building in Stykkishólmur is Stykkishólmskirkja, a modernist church designed to resemble a glacier. Tucked away in a former library in Stykkishólmur is artist Roni Horn’s Library of Water, an unusual exhibition of columns of water collected from the melting glaciers around Iceland. For hikers, the nearby Mt. Helgafell is considered a holy place. According to legend, anyone who climbs the mountain without saying a word or looking backward will get three wishes granted. 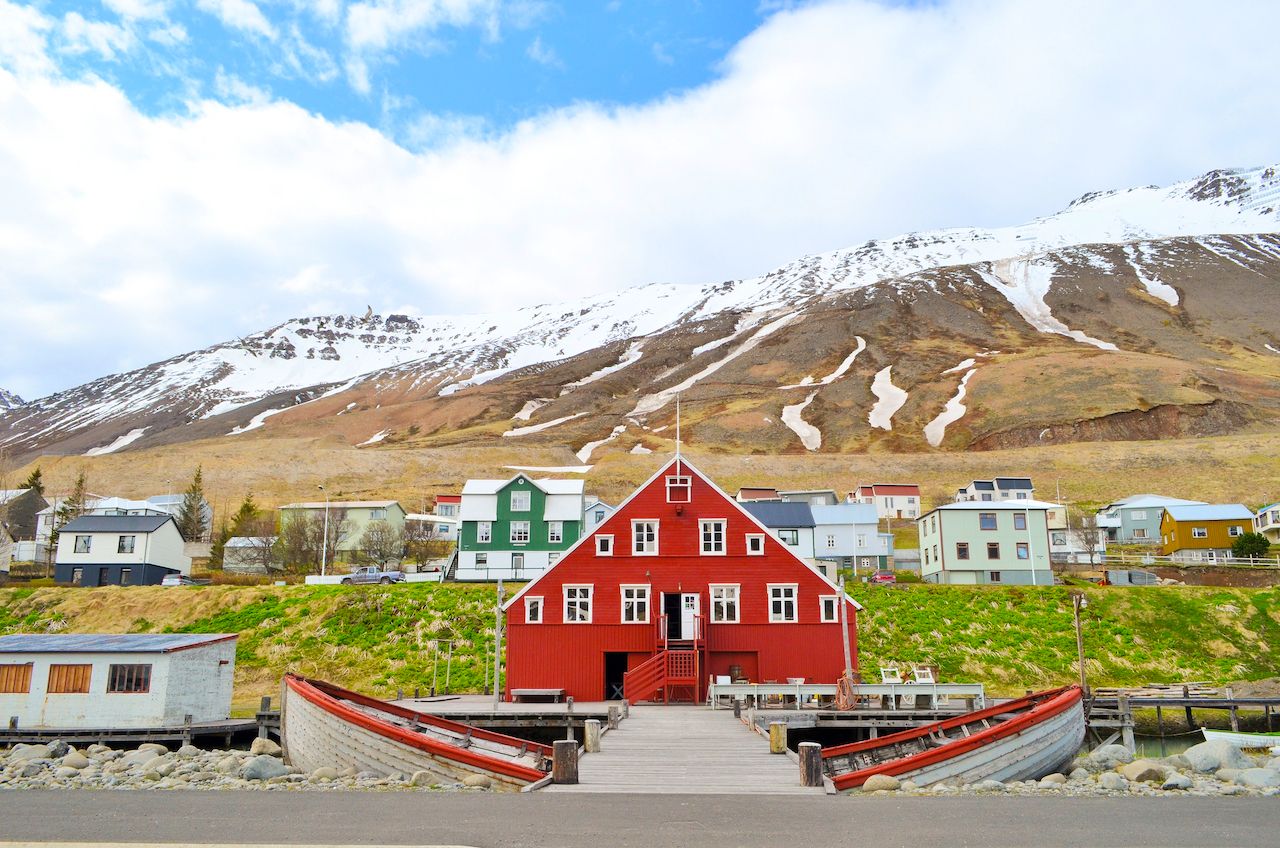 A popular place for hiking trails in the summer and skiing in the winter, this historic fishing village is best known for the largest maritime museum in Iceland, The Herring Era Museum. In the late 1800s, herring became an essential fish for the Icelandic economy, and Siglufjörður’s population grew to over three thousand people to keep up with the demand. This created a gold rush environment that eventually bust when the herring disappeared due to overfishing. The museum describes the exciting rise of the town through five exhibition buildings which include a rebuilt salting station and herring factory. Another use of an old fish factory is the family-owned craft brewery, Seagull 67, which makes IPAs and lagers and organizes tours and tastings. 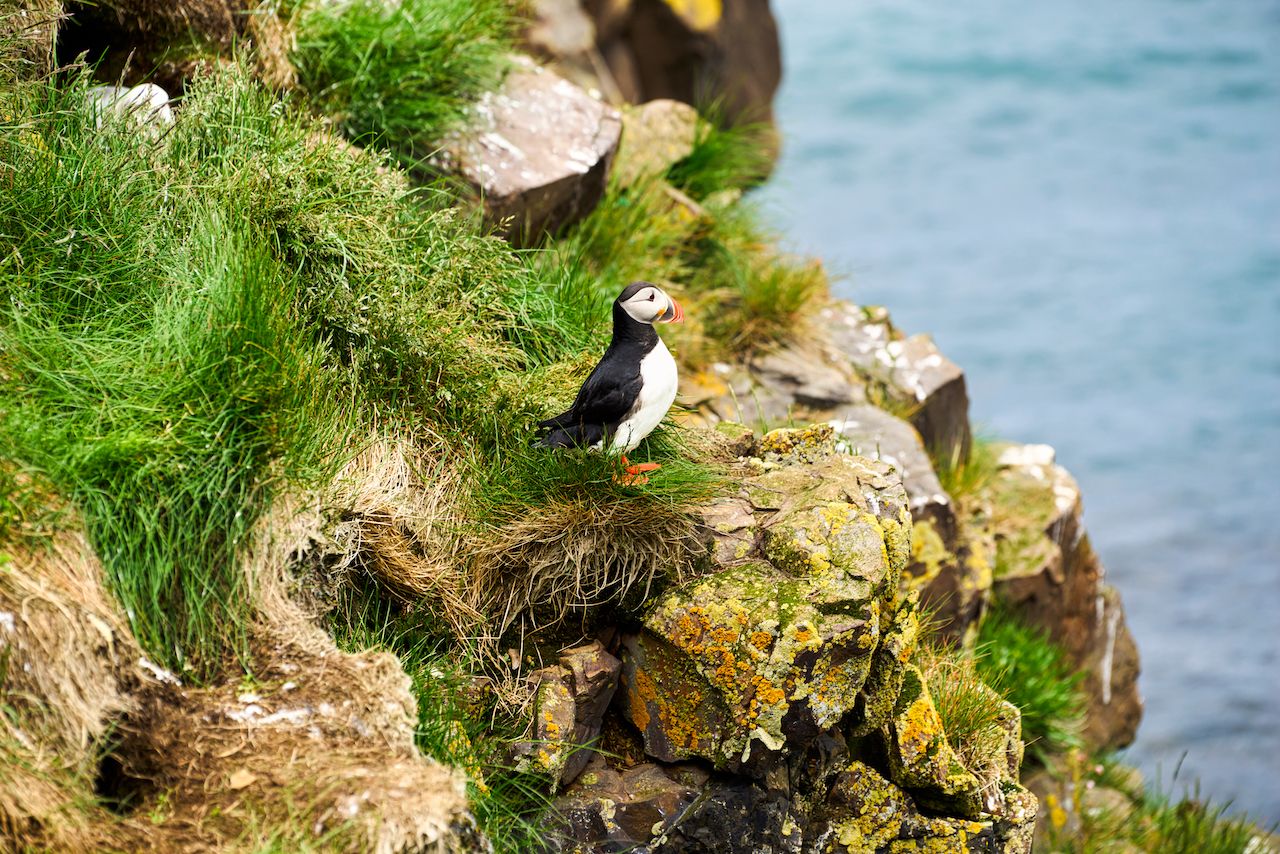 Borgarfjörður Eystri is a fishing village with less than 100 residents, but that all changes during the summer months when people travel to Borgarfjörður Eystri to see one of the largest puffin colonies in Iceland. The puffins start arriving at the end of April and stay through August and can be found every year at the Hafnarhólmi marina. It’s one of the most accessible places to see puffins up close, thanks to a boardwalk and viewing platforms.

This area is also known for its hiking trails which pass through colorful rhyolite mountains and black-sand beaches. You can even visit Álfaborg, the hill where Borghildur, the Queen elf of Iceland, supposedly lives. Mountain biking is a great way to check out the area, and you can rent a mountain bike at Fjord Bikes or take one of their guided trips where a local shows you all of the secret trails. 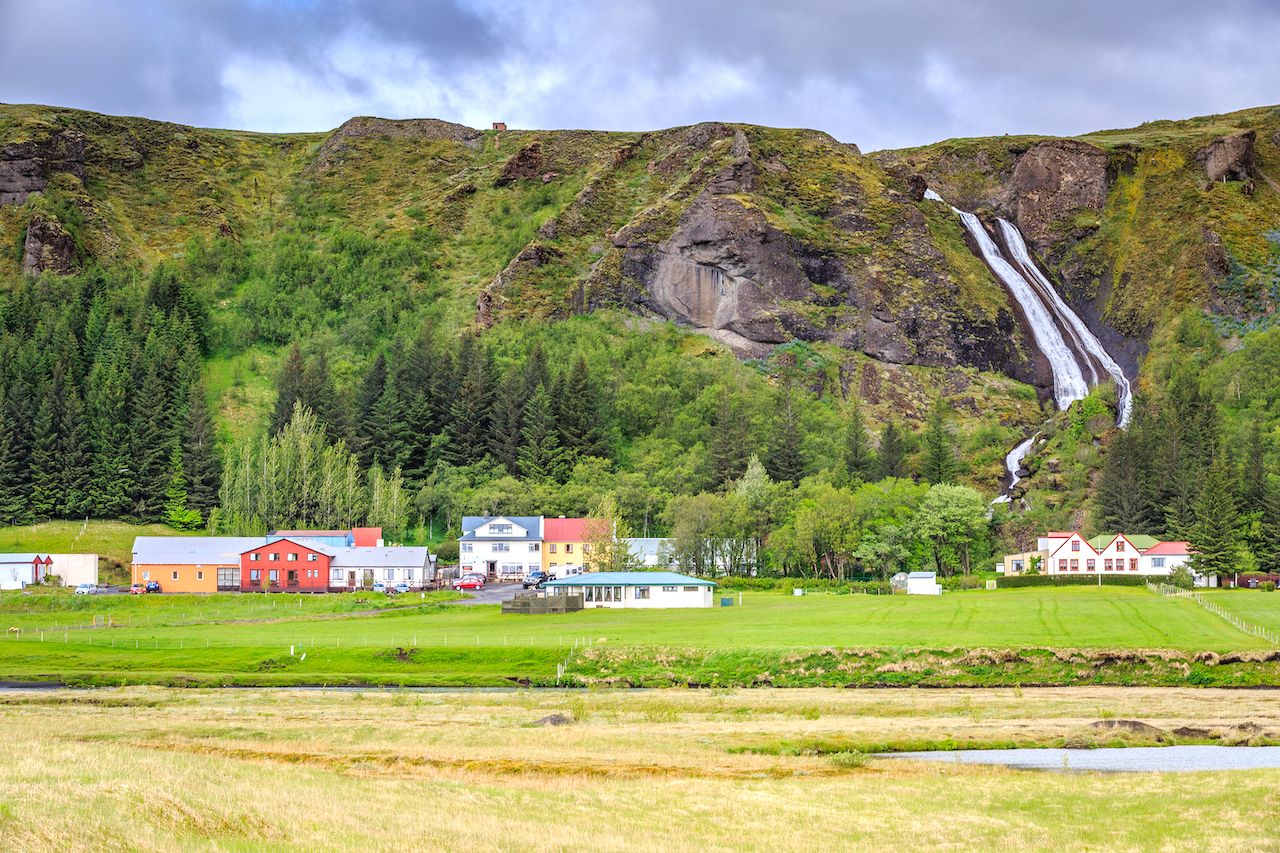 This town located in the southeast of Iceland looks at first like little more than a place to stop and get gas, but don’t let appearances fool you. Unlike other areas of Iceland that were founded by Viking settlers, Kirkjubæjarklaustur, which translates to “church farm,” was settled by Irish priests. The remains of a 16th-century convent are located in the town center, the result of an archaeological dig.

Kirkjubæjarklaustur also has a fascinating landscape in large part because it is located next to two of the deadliest volcanoes in Iceland, Katla and Laki. Go and check out Kirkjugólfið, a platform of basalt rocks that are so perfectly shaped that they look like human-made tiles or an art installation. While not visible from the road, the platform can be accessed by a parking lot off Route 1 and a quick five-minute hike along a well-marked path. Another short hike to check out is Systrafoss, or Sister’s Falls, located in the middle of the town and is so named because the two waterfalls run side-by-side.

Culture8 Fun and Folksy Experiences To Immerse Yourself in Icelandic Culture
Tagged
Art + Architecture Culture Iceland
What did you think of this story?
Meh
Good
Awesome

May 31, 2022 Taryn White
✖
travelstoke
Download the mobile app
stoked by