When I was around elementary school-age, my dad and I took walks up and down the Seattle waterfront. On the way back to the car, we’d frequently stop at a now-closed candy shop by the water. I’d get a little plastic bag full of jelly orange slices crusted with crystals of sugar, and he’d fill another bag with rounds of black licorice. He popped these nickel-sized circles into his mouth as he would any other treat, his face never betraying the flavor. One day, I asked to try one, and he handed the bag over without a word of caution. Turns out, those innocent looking pieces of licorice taste like licking the inside of a salt shaker.

The candy’s cough drop-like flavor combined with its leathery texture made for an unpleasant eating experience. Yet every time we went to the candy store, I would sneak one piece of his licorice, intrigued and disgusted by the savory, salty flavor.

My father’s strange candy of choice is a popular Dutch treat called Zoute Drop, also known as Dutch Drop, widespread throughout Scandinavia and the Netherlands. Finland has a version called salmiakki, while in Sweden it’s called saltlakrits. The salty flavor comes from ammonium chloride, a chemical used in cough medicine, not sodium chloride, the main ingredient in table salt.

Zoute Drop has none of the cheer of a rainbow swirl lollipop, nor the elegance of a Ritter Sport chocolate bar. It lacks the playfulness of a transparent blue gummy shark. Dutch licorice is austere, unfussy, and deceptively simple. The pieces are tough and inflexible; chewing it is a workout for your jaw. 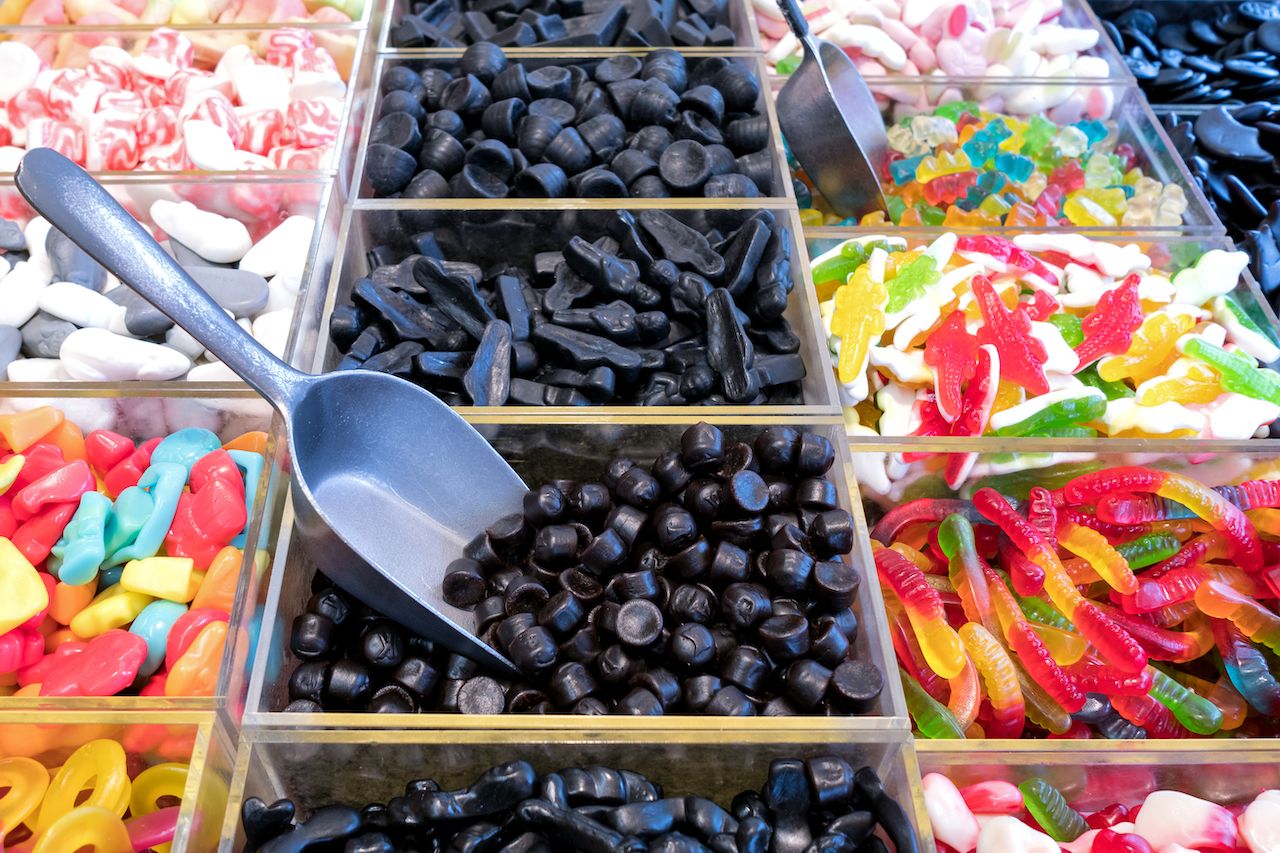 After immigrating from Jakarta, my dad, Benjamin, spent part of his childhood in Leiden, a town in Holland known for its tulip fields. This is undoubtedly where he picked up his love of salty licorice.

“When I was a young boy, I would always buy a couple of rolls and share them with my friends after school was dismissed. This was in Leiden, a university city where my late uncle taught art history. I remember being tailed by some of my companions who expected to be given several pieces of the licorice I bought,” Benjamin recalls. “I never met anyone who wasn’t Dutch who liked salty licorice.”

Americans think of candy as the apex of pleasure. We use it to relieve stress, to conjure up child-like joy, to escape reality and enter a paradise of cotton candy clouds and gum drop rainbows. Zoute Drop contradicts all of that, from how physically taxing it is to consume to its gloomy color. And that’s to say nothing of its odd flavor, which seems to flummox the taste buds of foreigners. It’s easier to think of Zoute Drop as a treat closer to a savory biscuit rather than a candy; a midday snack that you might find accompanying a cup of coffee or tea.

There is some mischievous trickery at work here. Zoute Drop looks so utterly unremarkable, so ordinary, that its intense flavor comes as a complete shock. It’s not just salty, although that’s the sharpest flavor. Zoute Drop is bitter-like cough syrup from the ammonium chloride, chased with the spice of black pepper. There’s sourness, too, somewhere in there — not a citrus sour, but pickled cabbage. The flavor is, no matter how you describe it, pungent; it lingers on your tongue and the back of your teeth.

There are many varieties: The diamond-shaped Zoute Drop and the coin design my father favored are mildly, though still palpably, salty. But it’s Dubbel Zout (double salt) rounds stamped with the capital DZ initials that are the most infamous variety. The hallmark of Dubbel Zout is that it makes your mouth pucker and turn to sandpaper. A salty firework bursts on your tongue, lingering only a few moments. Once the initial shock of salt wears off, Dubbel Zout becomes just a regular piece of Dutch licorice — yet most non-Dutch people don’t get past that first minute or two without a serious struggle.

For all its strangeness, Zoute Drop remains one of the Netherlands’ culinary treasures. The average Dutch person eats four pounds of it per year, making them the largest consumers of salty licorice in the world. It’s so beloved throughout Scandinavia and the Netherlands that it’s been affectionately nicknamed “black gold.” 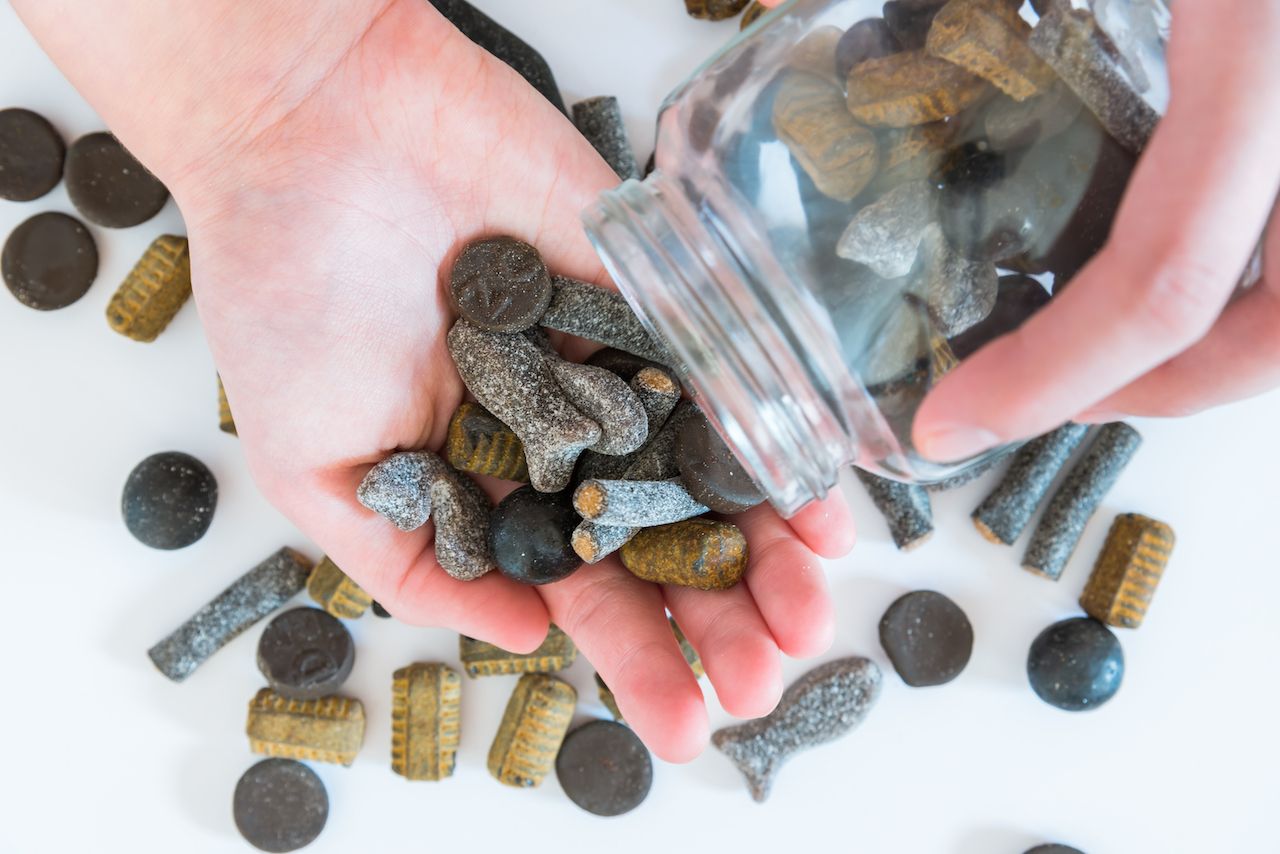 How licorice ended up in the Netherlands remains a mystery, but according to the Los Angeles Times, early Dutch traders probably brought it home with them after business trips to the Mediterranean. It’s been popular in the country since at least the 13th century, when it appears — alongside other spices and medicinal herbs — in a poem called “The Flower of Nature.”

By the 1930s, salty licorice had become a staple all over Scandinavia and the Netherlands, according to the BBC. Today, it’s available everywhere, from pharmacies to grocery stores to specialty candy shops like Het Oud-Hollandsch Snoepwinkeltje.

One explanation of the Netherlands’ (and Scandinavia’s) enduring love of this odd little candy is that the flavors simply taste like home. In the 15th century, the Dutch took control of the nutmeg and clove trade in Indonesia, introducing the Netherlands to the bitter, spicy flavors prominent in salty licorice. Brined and pickled dishes are also staples of the regional cuisine: The Dutch adore brined herring and pickled vegetables, and in Sweden and Norway, cured fish, known as gravlax, is a delicacy. Salty licorice fits right in with the saltwater-washed appetites of people from this part of the world. 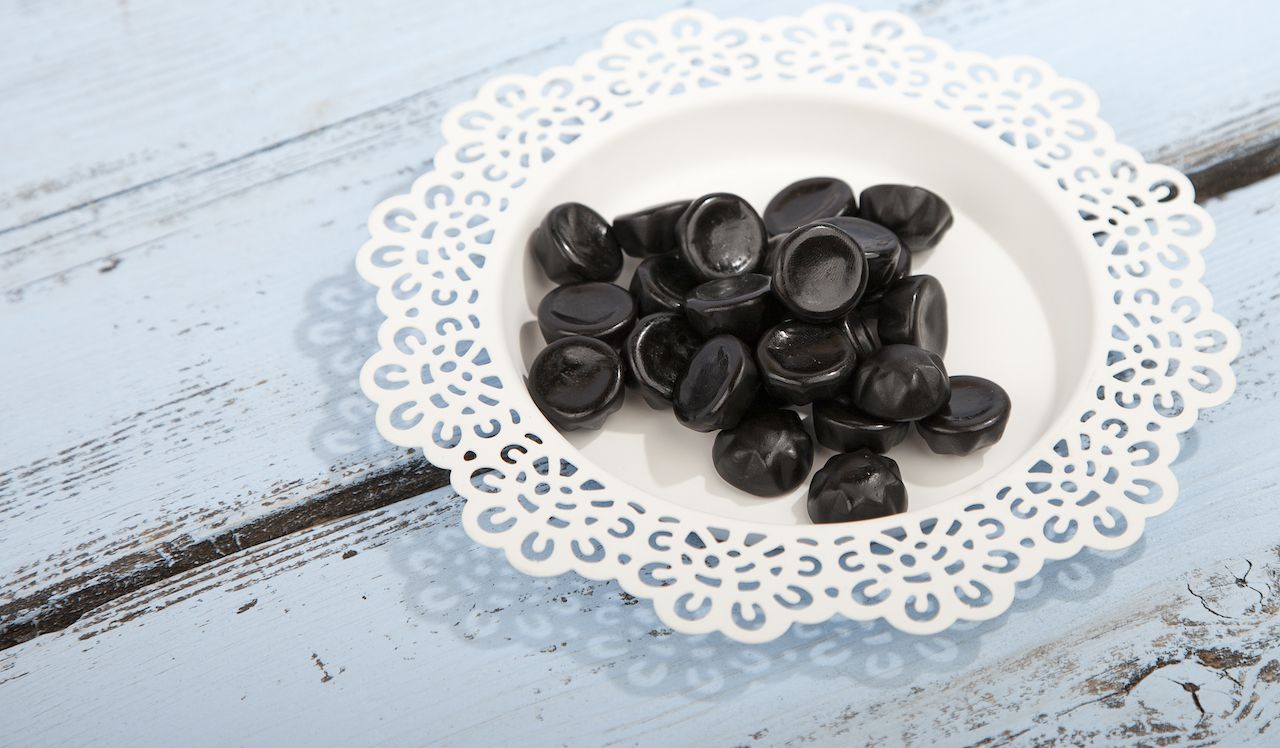 I recently ordered some Zoute Drop for my dad and I — a mild variety made by Venco, stamped with the coin design. I mailed two bags to my dad in Seattle, and kept two for myself. Cautiously, I ripped one of the bags open and popped a couple of coins into my mouth. I tasted the familiar saltiness, and I thought, “What am I going to do with all this salty licorice? I don’t even like it!” I stashed the remaining bags in a cupboard and went about my day. But then something strange happened: I began to crave it.

The more Zoute Drop I snack on, the more I understand its appeal. The savory licorice isn’t as cloying as sugary candy, but it’s just as satisfying — less harsh on the stomach and therefore easier to indulge throughout the day. Yet I found it appealing for another reason. Zoute Drop doesn’t resemble candy Americans are accustomed to in any way except one: It’s strongest flavor is nostalgia.

The moment the Zoute Drop coin hit my tongue, memories of my dad and I sitting his Ford Explorer on the waterfront, eating candy, came flooding back to me. I remember being giddy with excitement when we entered the candy store after our walks in the park, and the neon candied oranges in my plastic bag. I felt fascination and pride when I discovered his candy preferences made our family special, and that memory comes back with renewed force every time I eat Zoute Drop.

If the broadest definition of candy is that it can revive lost memories and transport us back to the innocent, less complicated days of childhood, then for the people who grew up eating it, Zoute Drop fits the bill — even though it’s more salt and spice than “everything nice.”

Spirits + CocktailsAmsterdam’s Beer and a Shot Is Way Better Than the One at Your Local Dive
Tagged
Culture Dessert Narrative Netherlands Amsterdam, Netherlands
What did you think of this story?
Meh
Good
Awesome