The American Institute of Architects has announced its 2020 COTE® Top Ten awards, which recognizes excellence in sustainable architecture and energy-efficient design. Winners include two libraries, a US Land Port of Entry in New Mexico, a social justice center and a houseless persons project, and multiple university campus buildings. All are striking in both design and function, and this week’s Climate Win looks at three that stand out the most.

One inspiring thing about all these buildings is a basic fact: they exist. Positive sustainability news often consists of pledges that won’t come to fruition for years or changes in government policies whose effects will be felt over time — leaving little for us to actually see or experience, here and now. In contrast, these winners from the 2020 COTE® Top Ten program are places you can actually visit to appreciate the future of eco-friendly design. 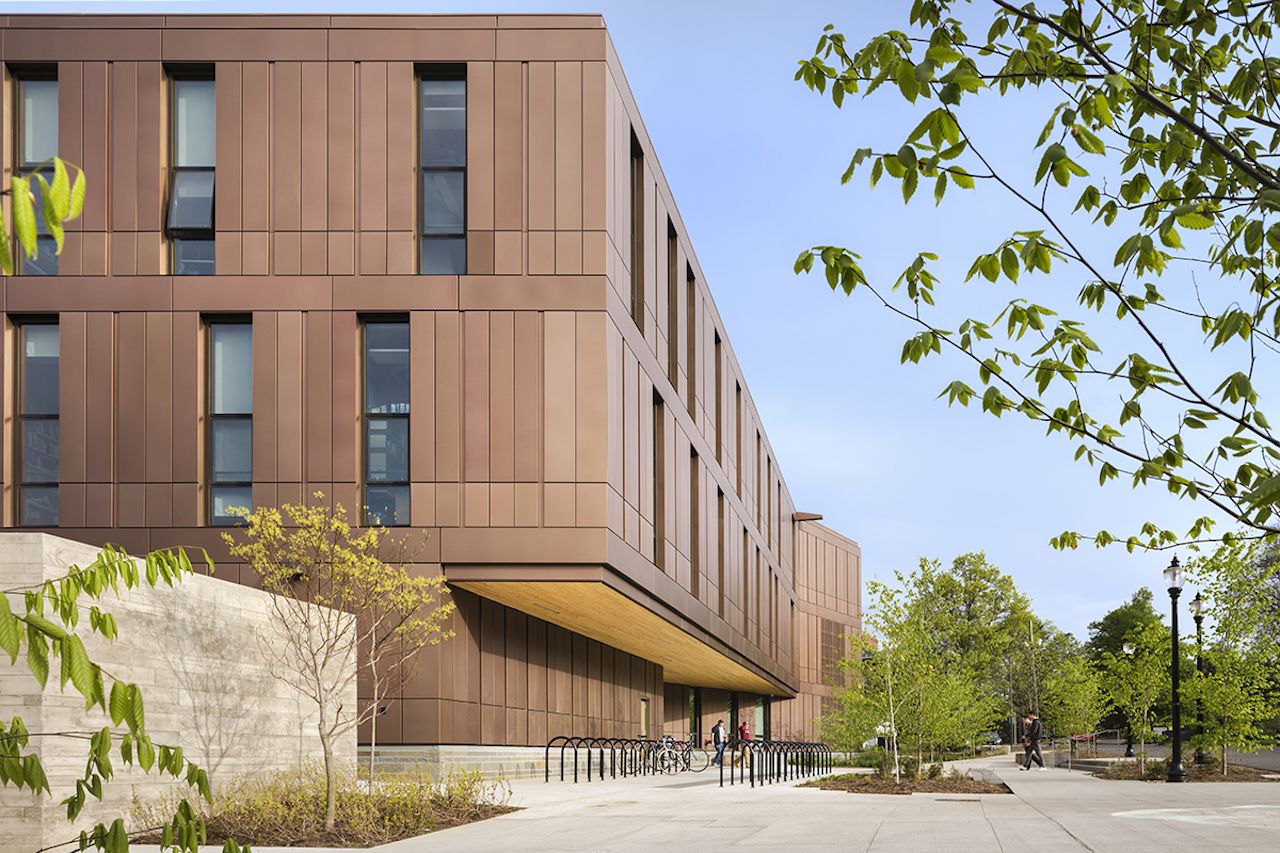 The John W. Oliver Design Building on the UMass campus was completed in 2017 with LEED Gold Certification from the US Green Building Council. The 87,500-square-foot building has won a slew of awards and is notable for its use of wood construction and its energy efficiency focus, which includes radiant flooring and water-powered chilled beams for temperature control. 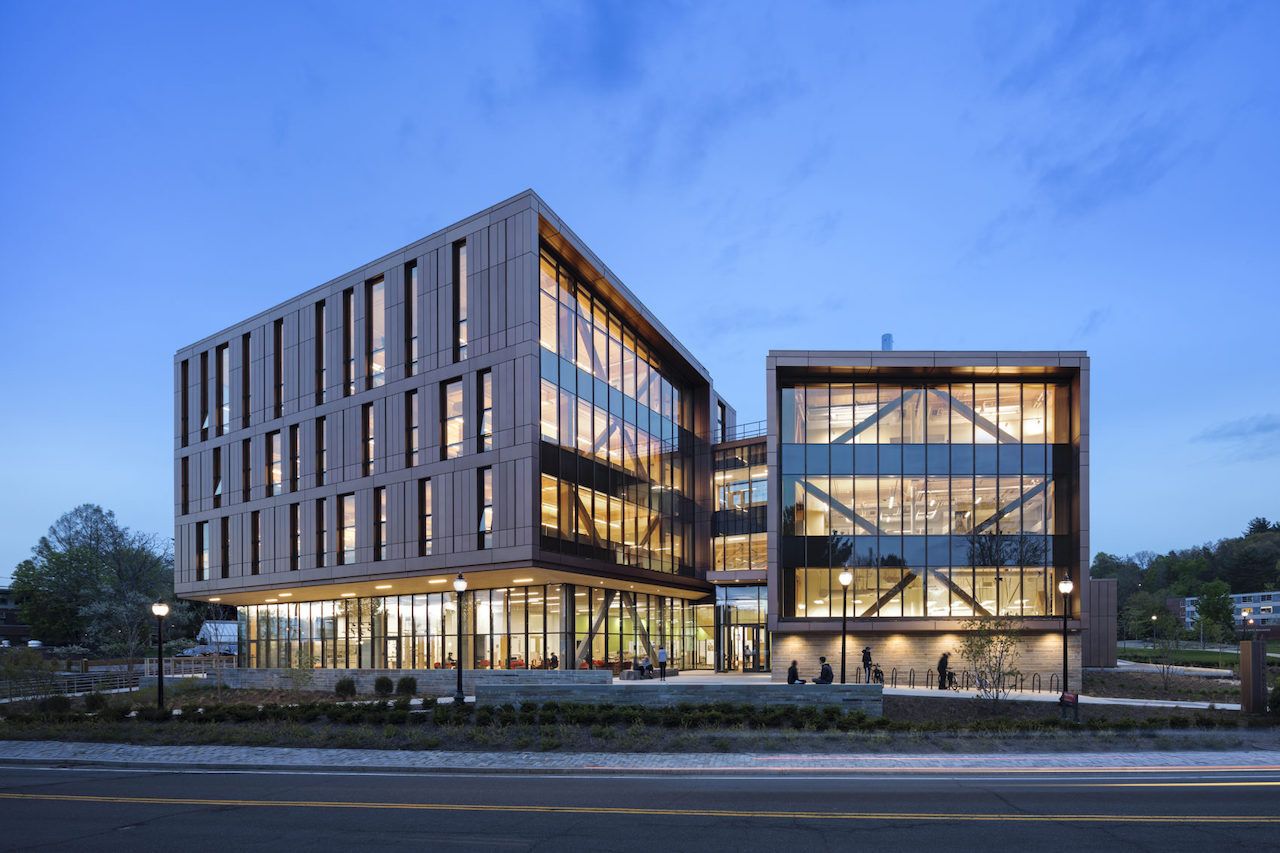 A 54 percent reduction in energy use compared to other buildings on the UMass campus was realized with this sustainable architecture project. The building was designed to harness heat and trap it during cold northeastern winters. 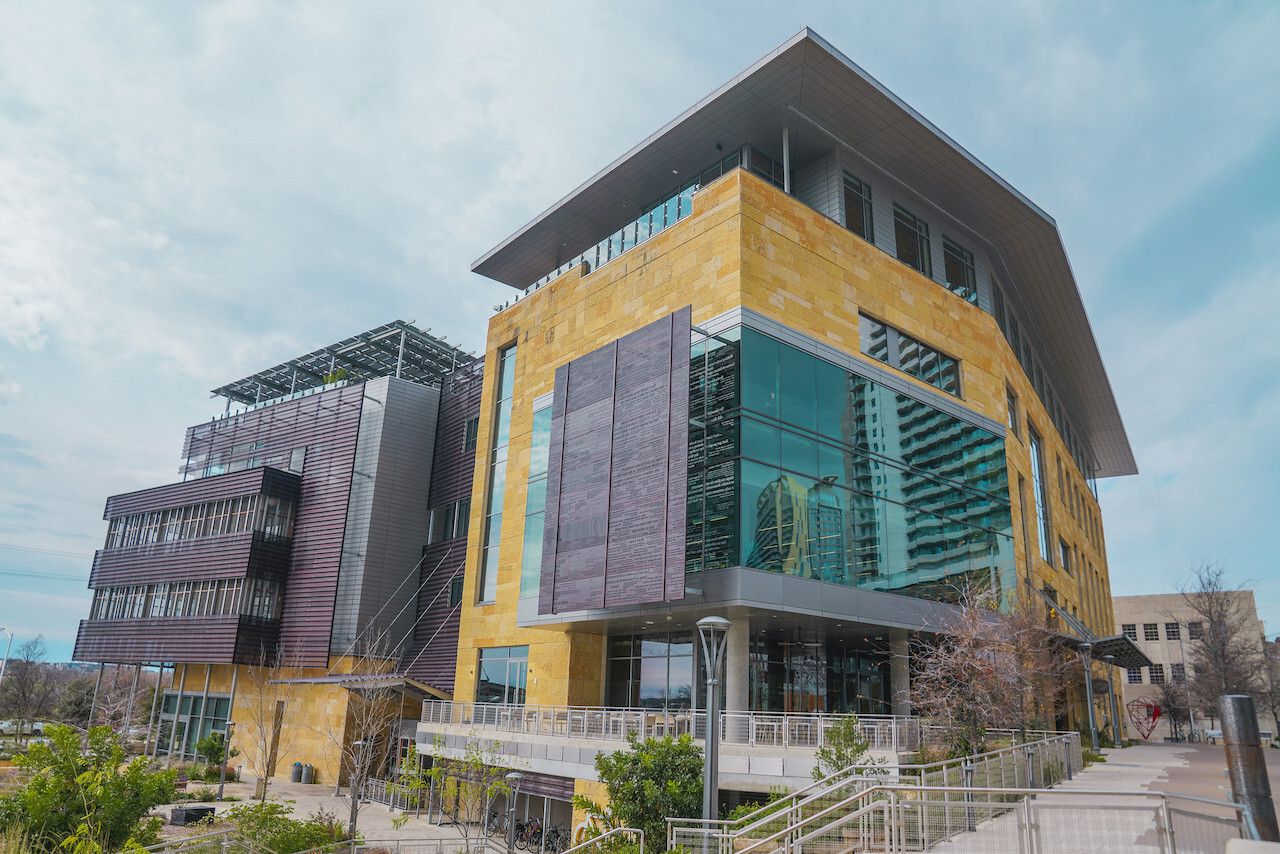 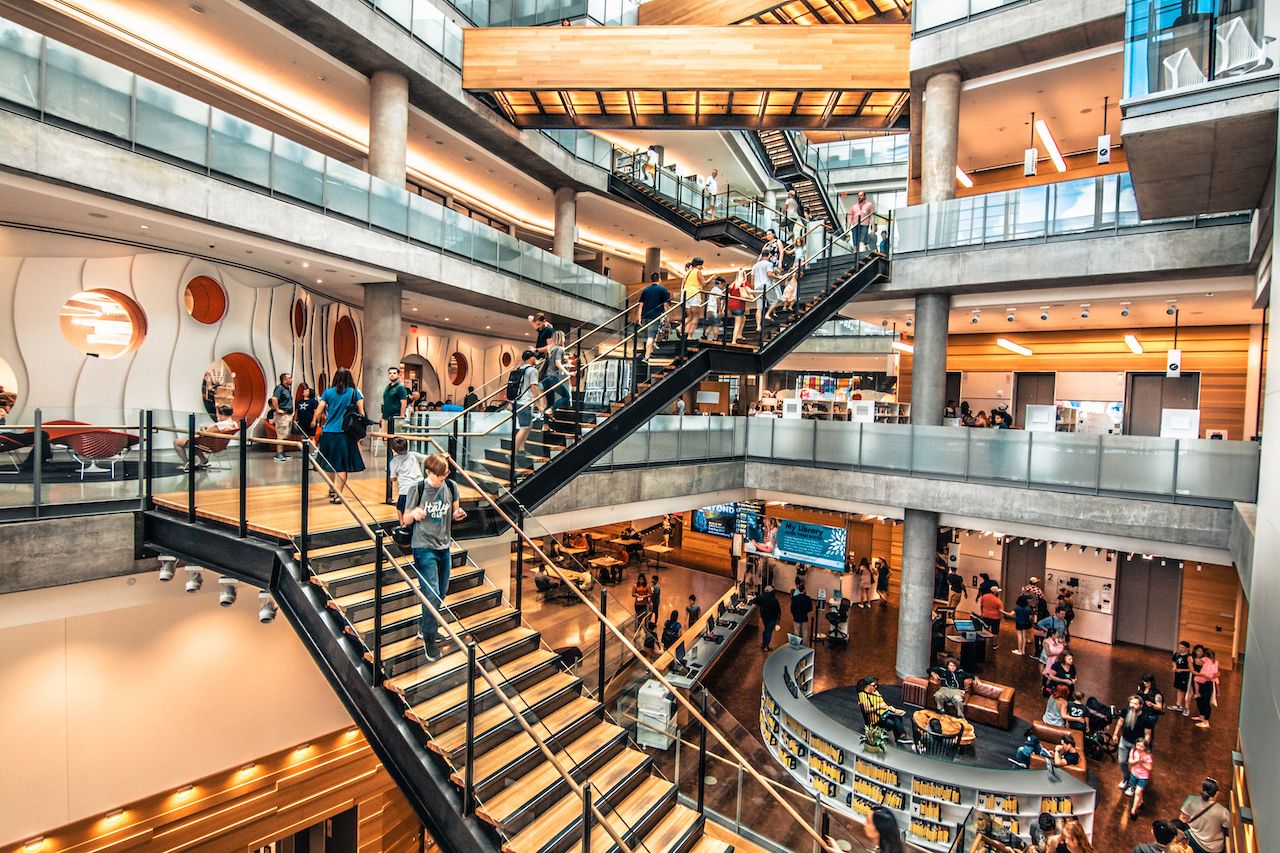 The building is the most daylit library in the country, a key sustainability factor, and is designed to serve as a model for responsible water conservation and use. Multiple outside reading terraces overlook the surrounding park and inside, guests can read and relax in a six-story atrium. There are over 200,000 books on site. 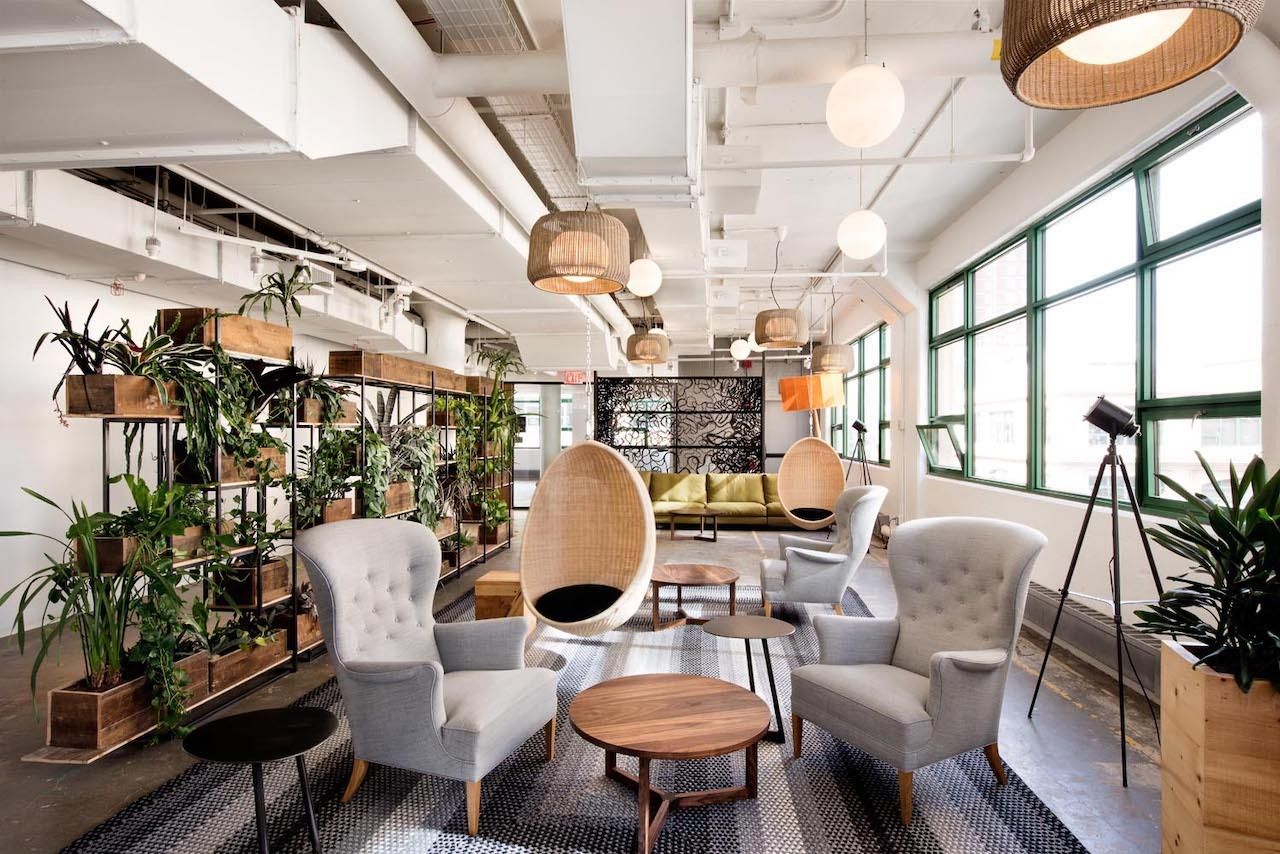 Etsy’s New York City headquarters, which opened in 2017, is a strong example of how “living walls” and vibrant greenery can be used to bring a space to life, tying the inside and outside together. Gensler, the design firm behind Etsy’s headquarters, incorporated extensive green walls populated by low-light and low-maintenance plants inside and, on the outside, a seamless integration to public spaces and the surrounding neighborhood. 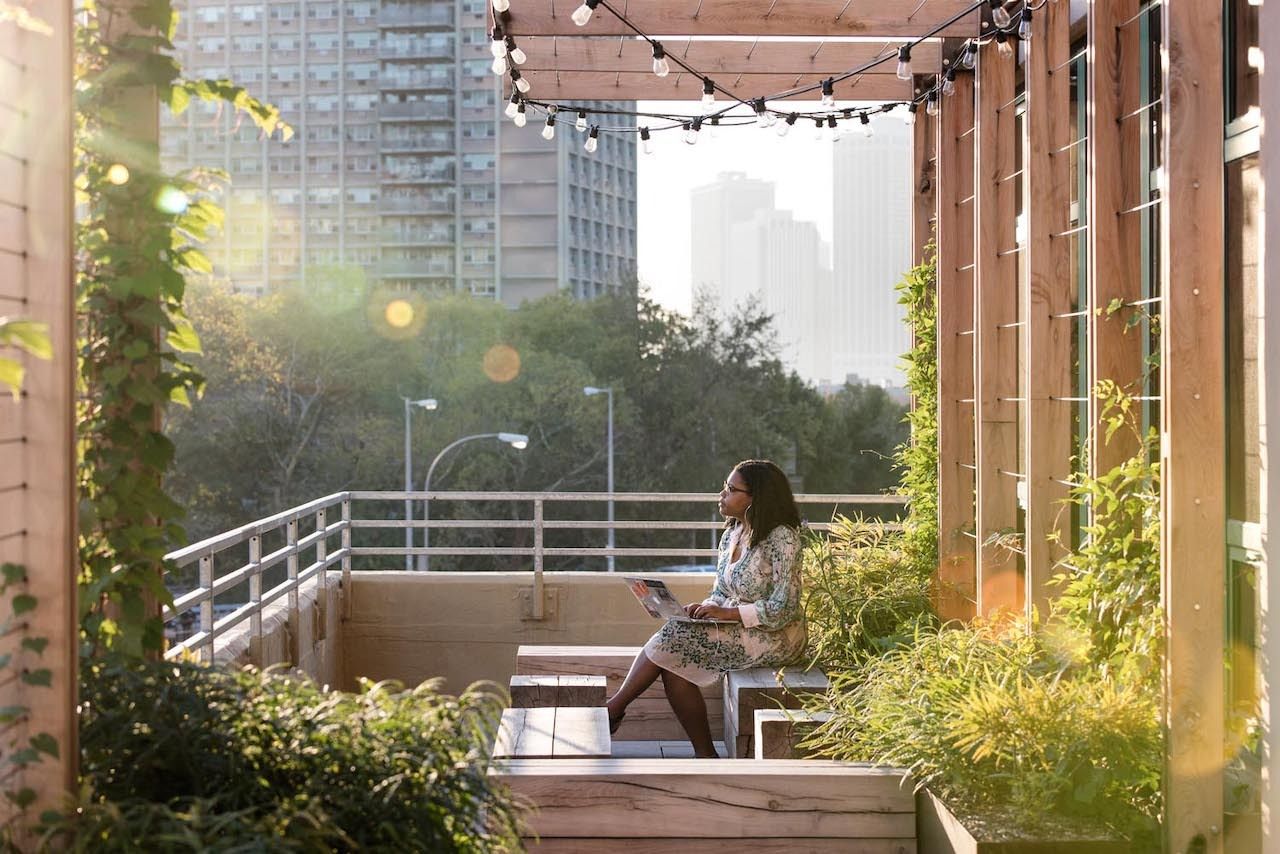 It is part of the Living Building Challenge Petal Certified buildings collection. The fifth floor north terrace features ferns, moss, and other low-maintenance plants to create a living outdoor space. The building is powered by 100 percent renewable energy and, because it was designed to harvest natural light throughout the day, Etsy was able to reduce its energy intensity by over 30 percent since moving in.

View the rest of the top 10 via the American Institute of Architects.

The Environmental Protection Agency will restore clean water protections for millions of bodies of water across the American West, The New York Times reported Wednesday. The Trump administration had weakened protections for rivers and other bodies of water in 2017 in an effort to please developers, leading to vast environmental damage in and around rivers, streams, and marshes in New Mexico, Arizona, and elsewhere.

The Keystone XL pipeline is officially no more, the Times reported. After more than a decade of attempting to secure permits and build a pipeline from the Canadian tar sands to Nebraska, TC Energy announced this week it has officially canceled the project that had drawn high-profile protests by Native and environmental groups.

Board members of a Native corporation in Alaska called the Pedro Bay Corporation voted to allow the nonprofit group Conservation Fund to buy easements on 44,000 acres of land in southwest Alaska, effectively shutting off the proposed access road route for the controversial Pebble Mine, The Washington Post reported.