Sometimes, when you’re on day five of a backpacking trip and “showering” under a Hefty bag, you forget that once upon a time all showering was outdoors. The advent of indoor plumbing is a pretty new concept for humanity, but somehow we’ve already come full circle from making showering outside a sign of desperation to it becoming a fabulous luxury.

But, seriously, dousing yourself in eucalyptus body wash while showering under the shade of a ficus tree is pretty sweet. And if you’ve got the cash, the world has no shortage of luxe accommodations that feature outdoor showers with views of everything from the Indian Ocean to old gold miners’ cabins. Here are nine resorts with the sexiest outdoor showers to explore this summer. 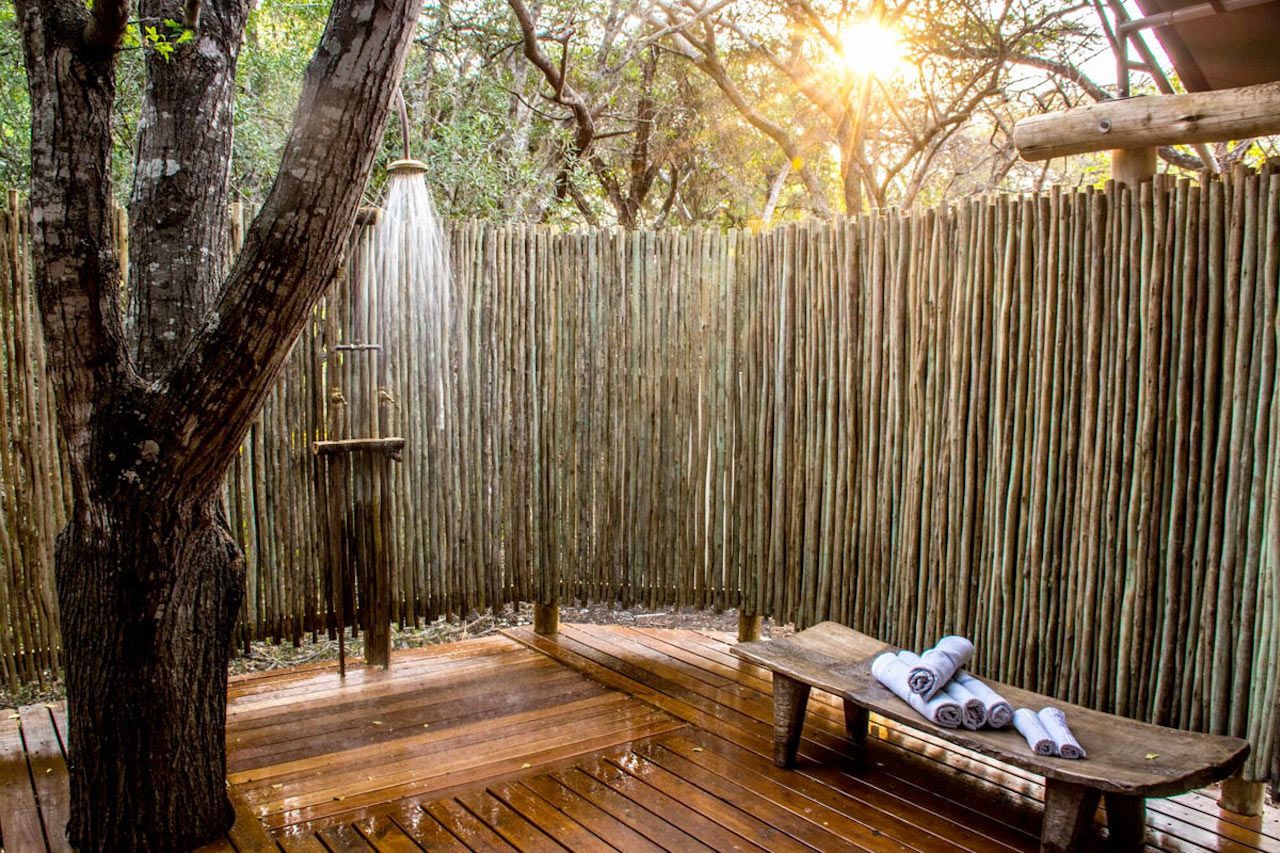 One of the world’s great glamping resorts is a downright steal at about $375 a night for an all-inclusive luxury safari. In addition to private guided game rides and a four-post bed, you get a soaking tub that looks out your tent onto the African landscape and a shower near enough to the fields that monkeys can jump right in and join you. They don’t — don’t worry. But it’s about as close to showering in an African thunderstorm as you can get at a luxury lodge. 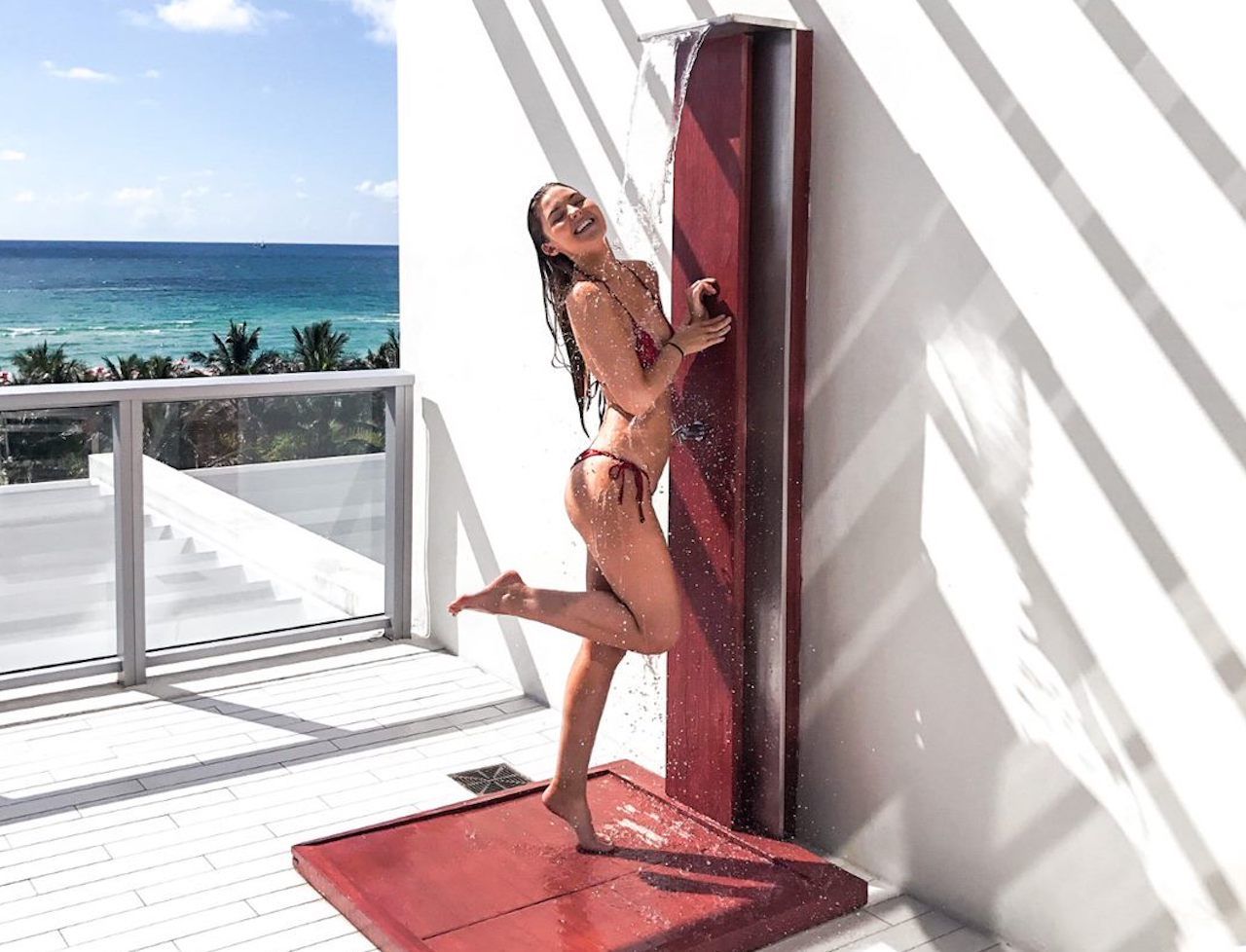 Poolside bungalows in South Beach, however, aren’t anywhere near the neighborhood of what you’d call a steal. But if you’ve got a few ill-gotten dollars laying around and need to spend them on something over-the-top, the W South Beach’s 1,330-square-foot poolside bungalow comes with a waterfall shower. That means when you look around the pool deck and realize people have been drinking in there for hours, and still haven’t gotten up to use the restroom, you can clean yourself off almost instantly. 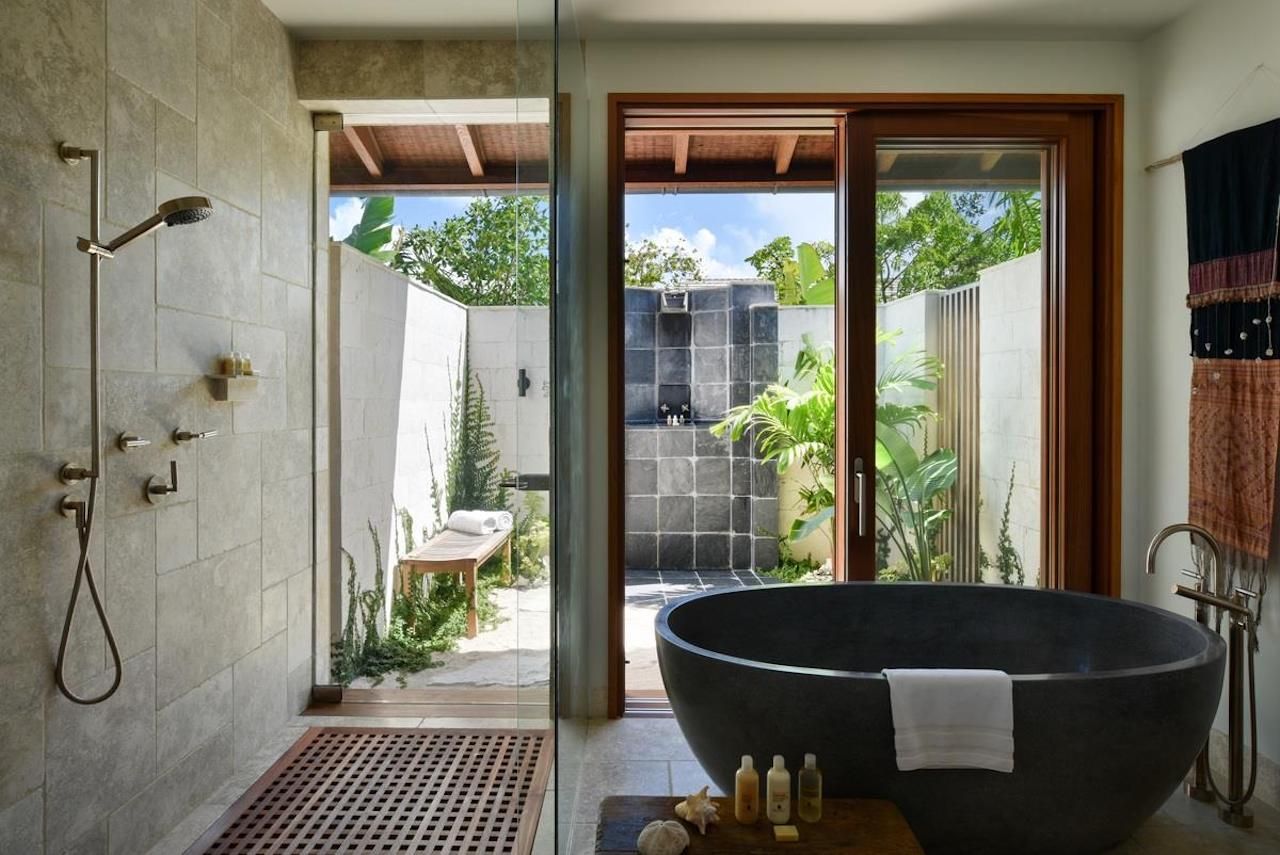 This private island resort in the Turks and Caicos isn’t just living LIKE celebrities, it’s also living WITH celebrities. Bruce Willis, Cindy Crawford, and Donna Karan count themselves among the island’s homeowners. Don’t get too excited, you won’t be interacting with them much, but you won’t care when you’re indulging in your private plunge pool with a front row seat to the prettiest water in the Caribbean. As you’d expect, that pool and private beachfront come with a simple shower for cleaning off before you go inside. But just off the bathroom, you’ll also find a waterfall shower set under a tree, so you won’t have to leave the soft island breezes to use some soap. 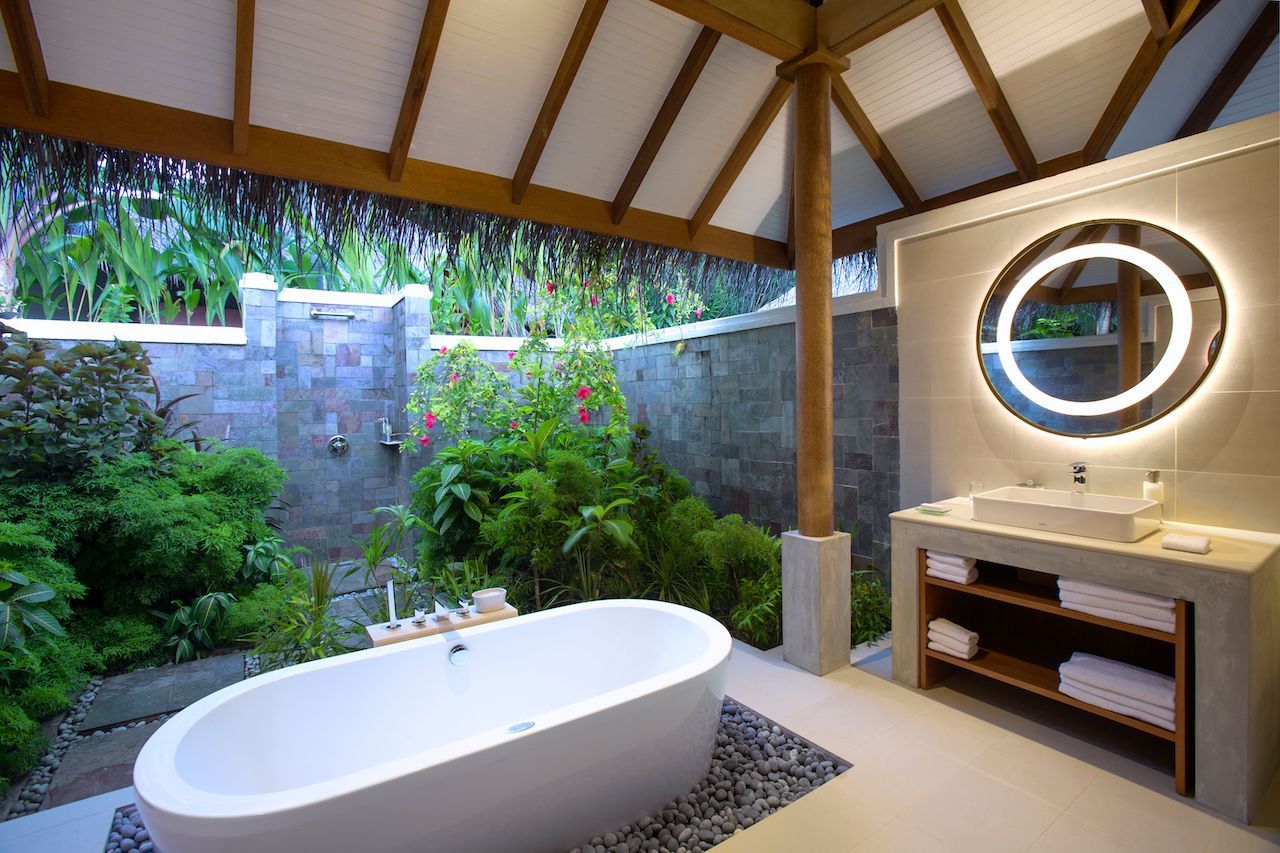 Baros Maldives is like the Golden State Warriors of romantic resorts. Much like every other team in the NBA shows up for the season more or less knowing they have no shot, resorts show up at the World Travel Awards with a faint hope they might win the coveted Most Romantic Resort award. But everyone knows who’s winning before they even start the ceremony. This private resort with 77 overwater bungalows, white sand beaches, and clear turquoise ocean has won that award six years in a row. It also boasts a Deluxe Villa with an open-air bathroom, with a surrounding flower garden to protect your privacy. 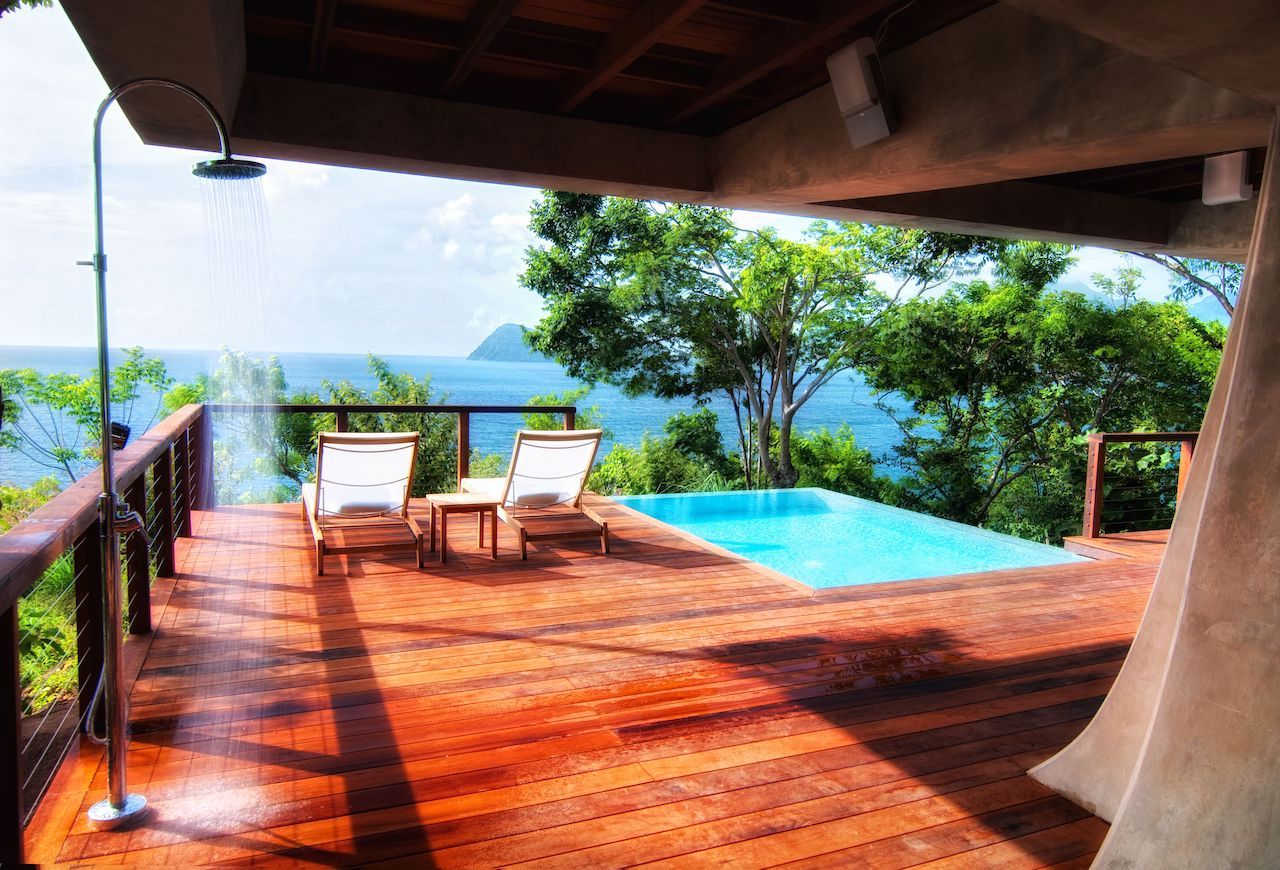 The Caribbean’s most intense island has always been a perfect vacation spot for adventure seekers who don’t mind roughing it. Luxury, however, has not so much been its thing. Enter Secret Bay, Dominica’s lone five-star resort, which in addition to offering unrivaled cliff top views from each of its seven villas also features outdoor showers right next to its private plunge pools. The villas are spread at different levels across the property, too, so you won’t need any clothes for plunging, bathing, or anything else really. 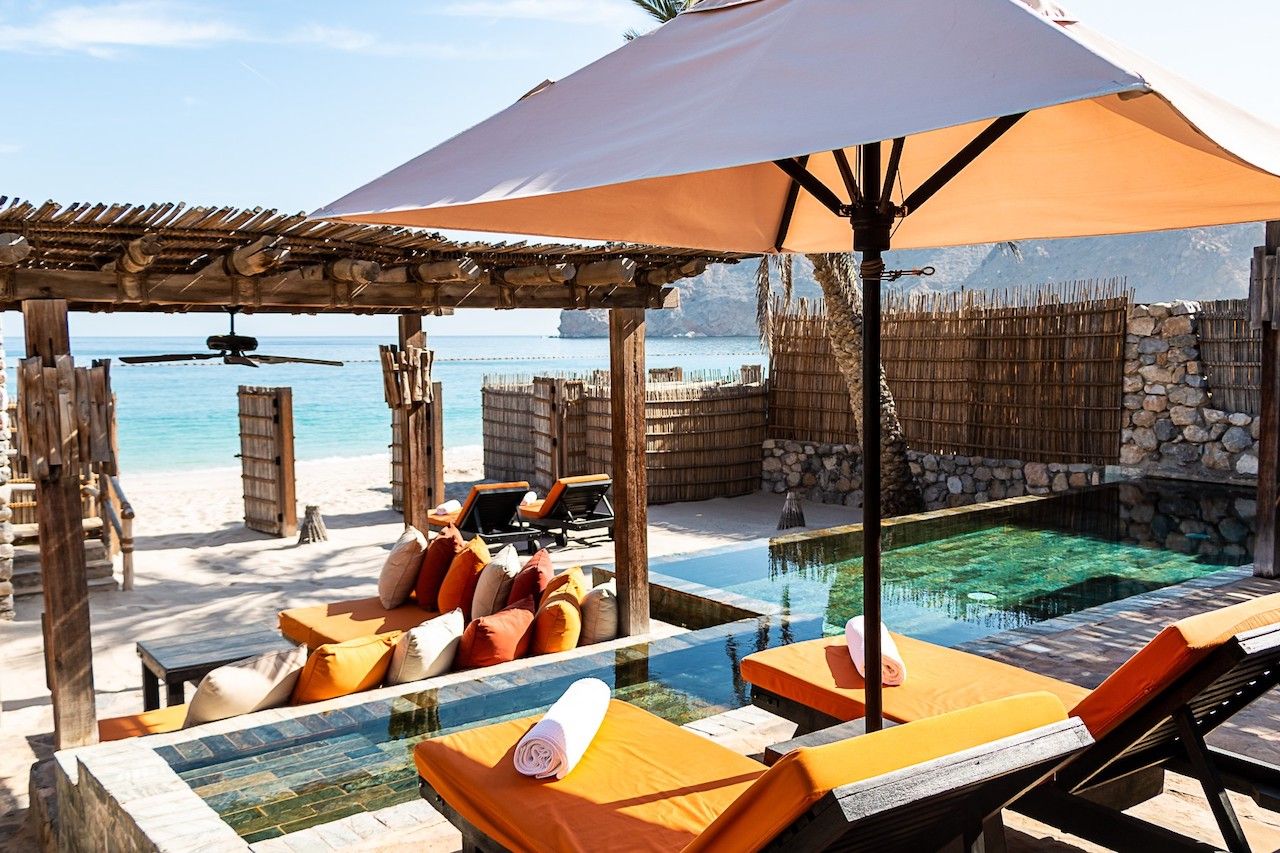 If you don’t religiously read travel publications, Oman is the new travel darling of the Middle East, the Gulf state finally getting its time after UAE and Qatar hogged the spotlight. Its arrival is signaled by places like Six Senses, where the luxury villas feel like the stone dwellings early settlers here might have used, just with air conditioning. The Spa Pool Villas also let you shower, presumably, like the old-timey Omanis, giving a nod to traditional bathing areas by allowing guests to shower in privacy behind towering cobblestone walls. Once you’ve toweled off, head outside and check out the mountain views to one side and beach vistas to the other. 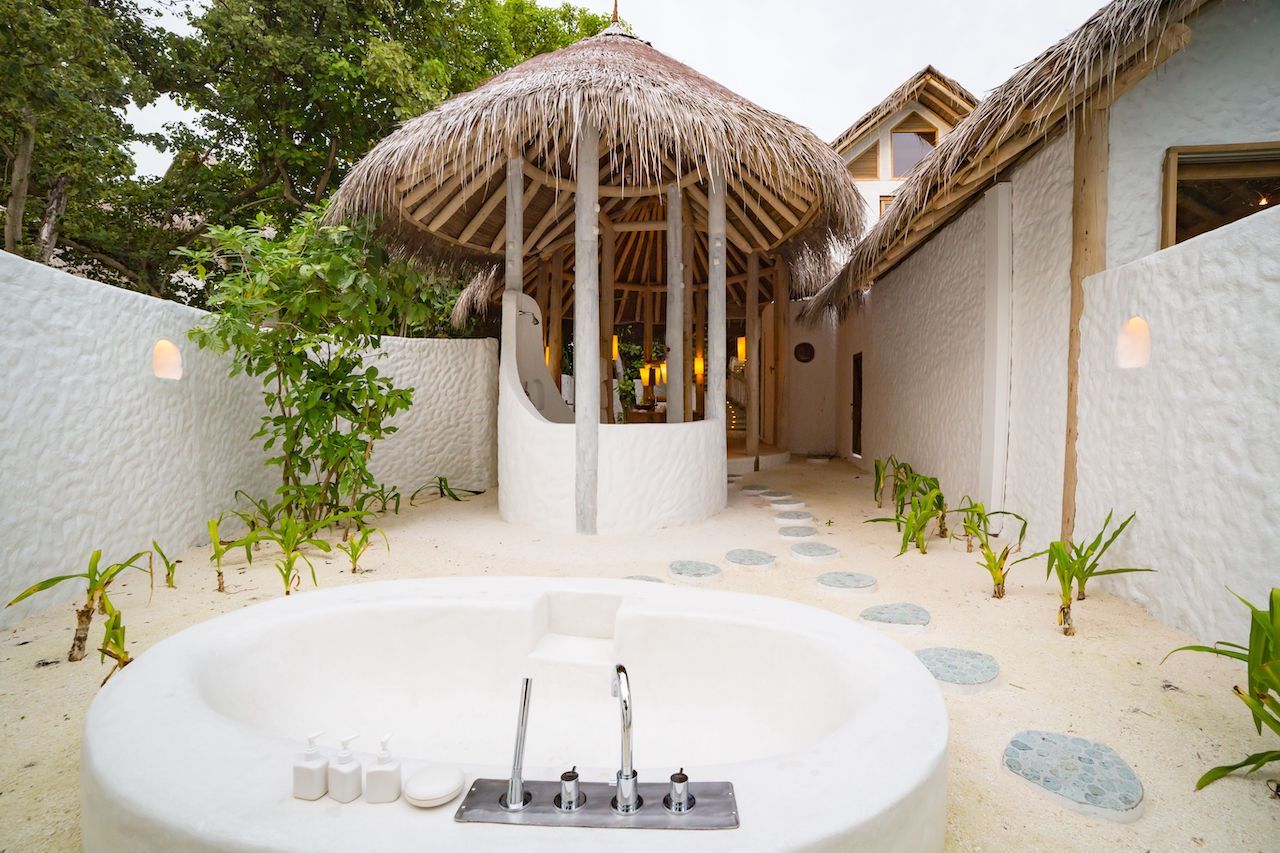 You’ve ever taken a bath in the middle of a reflecting pond? No, not like the time you had a few too many in college and washed off the night in the campus pond. Like, sat in a full-on bathtub in the middle of a pool? Well, if you can get yourself a luxe suite at Soneva’s flagship resort in the Maldives, that wish can come true. Not big on baths? The showers are also outside in uber-tropical straw huts, so you can reminisce on the tiki bars that got you swimming in that reflecting pool in the first place. 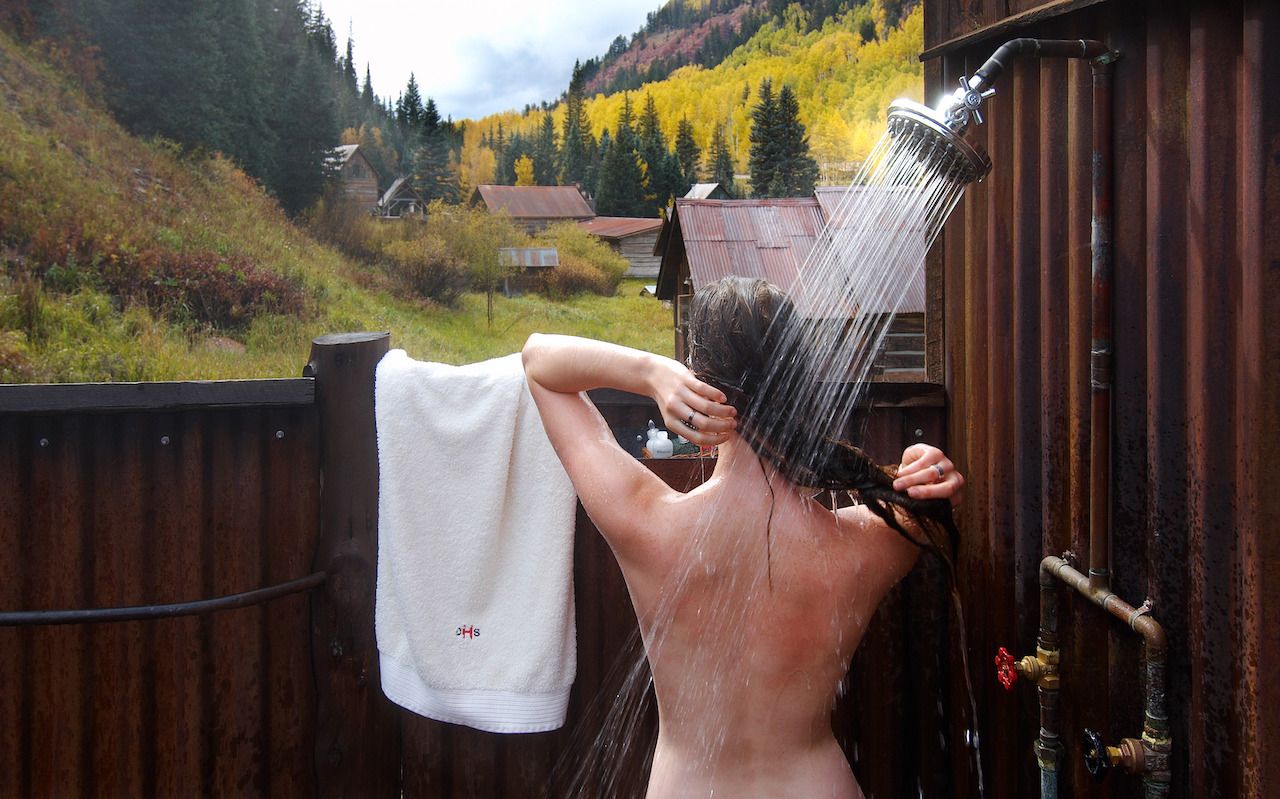 We’re no experts on Old West history, but it’s a pretty fair bet that on the rare occasion gold miners showered, they did it outside. So, really, this luxury resort forged from a gold-mining ghost town is just keeping it real with the shower in its Echo Cabin, where you can take in the views of the San Juan Mountains while you enjoy the hot water miners never had. You’ll also be looking out on the tin roofs and weathered wood of the resort’s other restored miner’s cabins. But as the only one with your own outdoor shower, obviously, you’ve struck it richest. 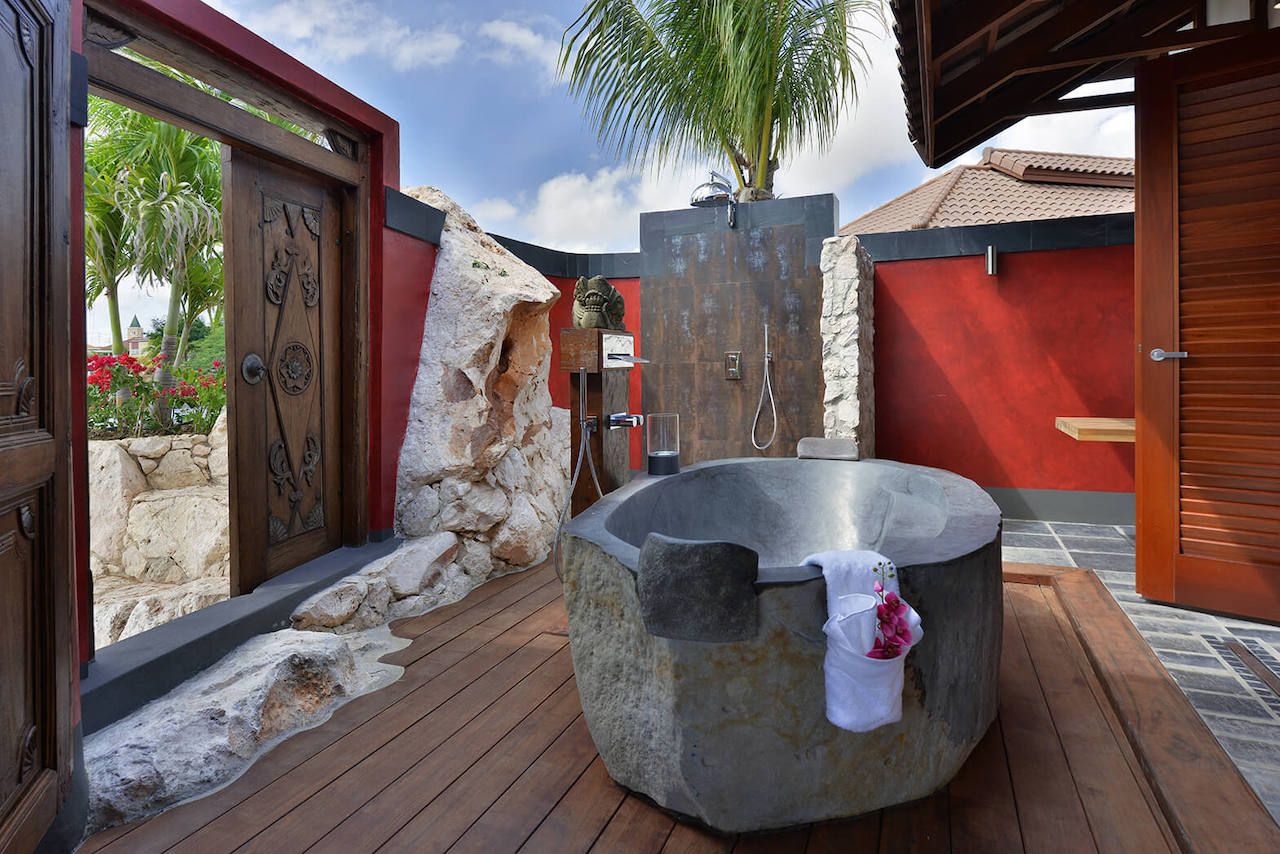 The people of Curaçao work hard to keep their nature pure. But that doesn’t mean you can’t indulge in some luxury while you’re appreciating said nature. Take the Baoase Resort, the island’s lone five-star property where folks lucky enough to snag a Superior Beachfront Pool Suite can take baths, outside, in tubs carved out of giant stones from the island of Java. Sounds like some made-up movie description of a luxury bathroom, we know, but the tubs sit next to sinks also imported from Indonesia, and a private rain shower. So if you don’t have time to fill an ancient rock with bubble bath, you can still get clean.

Epic StaysThe 8 Most Stunning Hotel Hot Tubs That Are Only a Short Flight Away
Tagged
Lux Travel Insider Guides Epic Stays
What did you think of this story?
Meh
Good
Awesome