The Olympic games don’t just draw the best athletes in the world — they also draw the best support staff in the world. And that includes the ski patrollers responsible for keeping more than 300 international athletes safe during Olympic ski events as they move at some of the fastest speeds the world has ever seen.

Being one of the world’s best ski patrollers isn’t a common job, especially as there’s no clear training path to the top like an athlete may follow. So we caught up over email with Bruce Welton, 37, a ski patroller at the 2022 Olympic Winter Games in Beijing, to find out what it’s like behind the scenes (and on the slopes) preparing for the upcoming Olympic ski events. Welton has been in China since November 2021, teaching and training local ski patrollers on best practices for safety during the 2022 Olympic ski events in Beijing.

Everything below is Welton’s personal take on teaching and traveling in China, not a reflection of any official stance from anyone affiliated with the Olympic Games (though it’s safe to say most people working the events are probably enjoying themselves). Some answers have minor edits for length and clarity.

Matador: Tell us about yourself, please 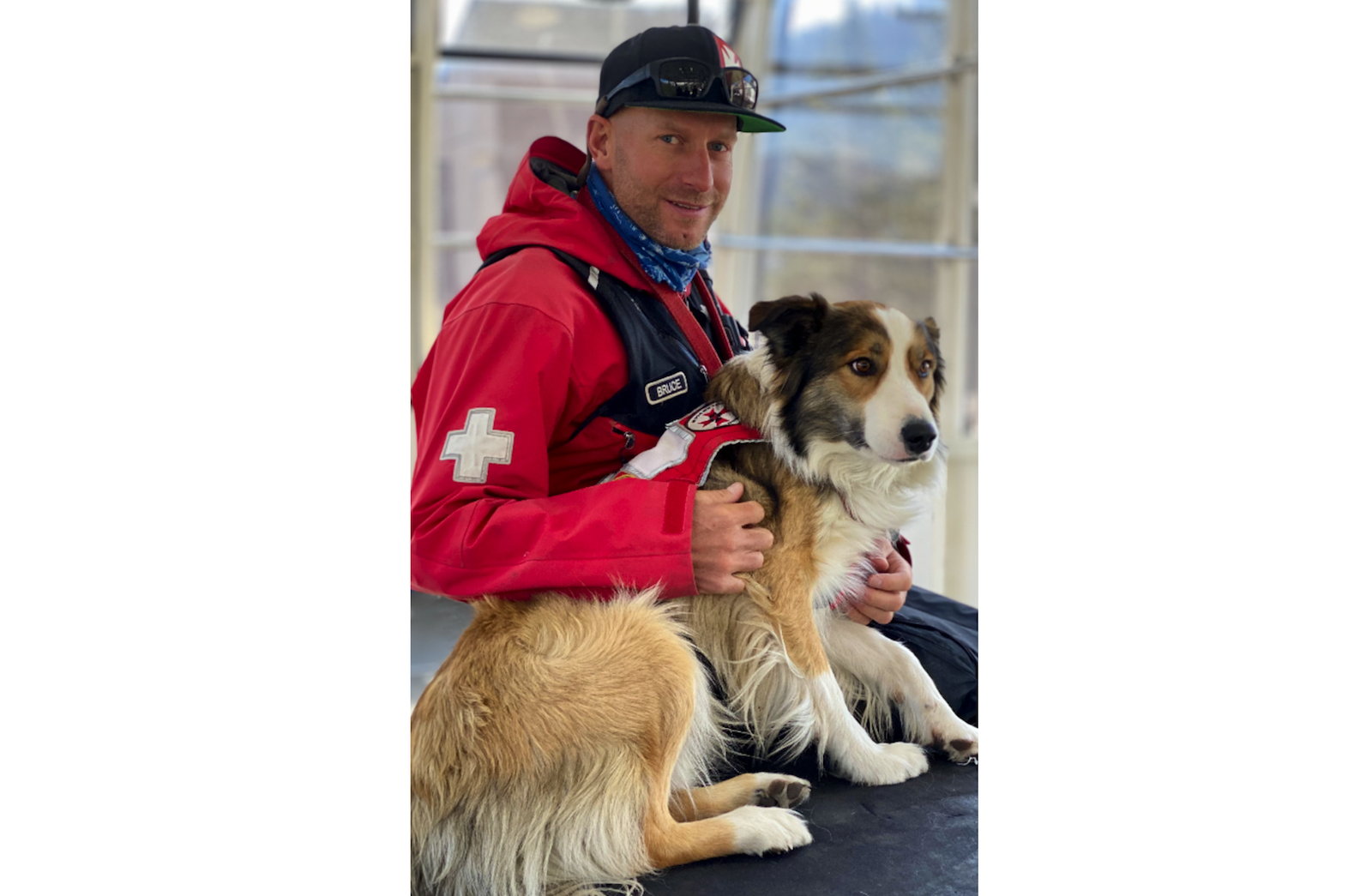 I’m Bruce and I live in Truckee, California. I’m a ski patroller in Lake Tahoe, and now, a ski patroller and ski patrol instructor in Beijing around the 2022 Olympic ski events. My primary responsibility has been to help train the local patrol team to make sure they’re able to handle any on-mountain medical responses, including patient care and transport.

How long have you been skiing? What’s your patrol experience?

Unlike many others who love skiing and made it their career, I got a relatively late start. As a young boy, my father was a ski patroller, which naturally gave me plenty of opportunities to ski. But as my mother puts it, I had no interest in skiing and my parents didn’t push it on me — for that, I thank them.

So I wasn’t on skis until age 12, straight-lining down a small hill in Pennsylvania. I had straight skis and my jacket fully unzipped, waving behind me like a Superman cape. I most likely had a goggle gap of some extent and no clue how I was going to stop. But that day I absolutely fell in love with skiing.  There is something magical about the feeling of sliding on xue (Chinese for snow).

As a teenager, I skied as much as possible. From skiing with my father, I quickly learned what ski patrollers are and what they do. I thought they had the best job on the planet.  I was convinced of it. And since then, I’ve learned that I was correct.

Living and going to school in Killington, Vermont exposed me to the ski industry in all of its glory. I quickly found out that joining the ski patrol may not be as unattainable as I once thought and eventually made it as a rookie patroller (minus the goggle gap) in 2009.

How did you become an Olympic patroller? What was the application process like?

As with many things in life, it’s about who you know. I have a good friend, Kari, who runs the Association of Professional Patrollers. Through there, she met Ed Gassman, who has been in charge of assembling the international ski patrol team for the past 20 years. She told me Ed was working on the team for Beijing and to contact him if I was interested. She also vouched for my experience and qualifications with Ed. Six months later, I was on an airplane to Beijing.

When did you get there? Did you quarantine? How long will you be there?

I flew from LA to Beijing on November 14 and spent 21 days in quarantine in a hotel in Tianjin. It was a requirement for everyone entering the country and pretty strict — I wasn’t allowed to leave the room. I plan on being here through the Paralympics and heading home on March 15.

What is a normal pre-Olympic day like for a ski patroller? 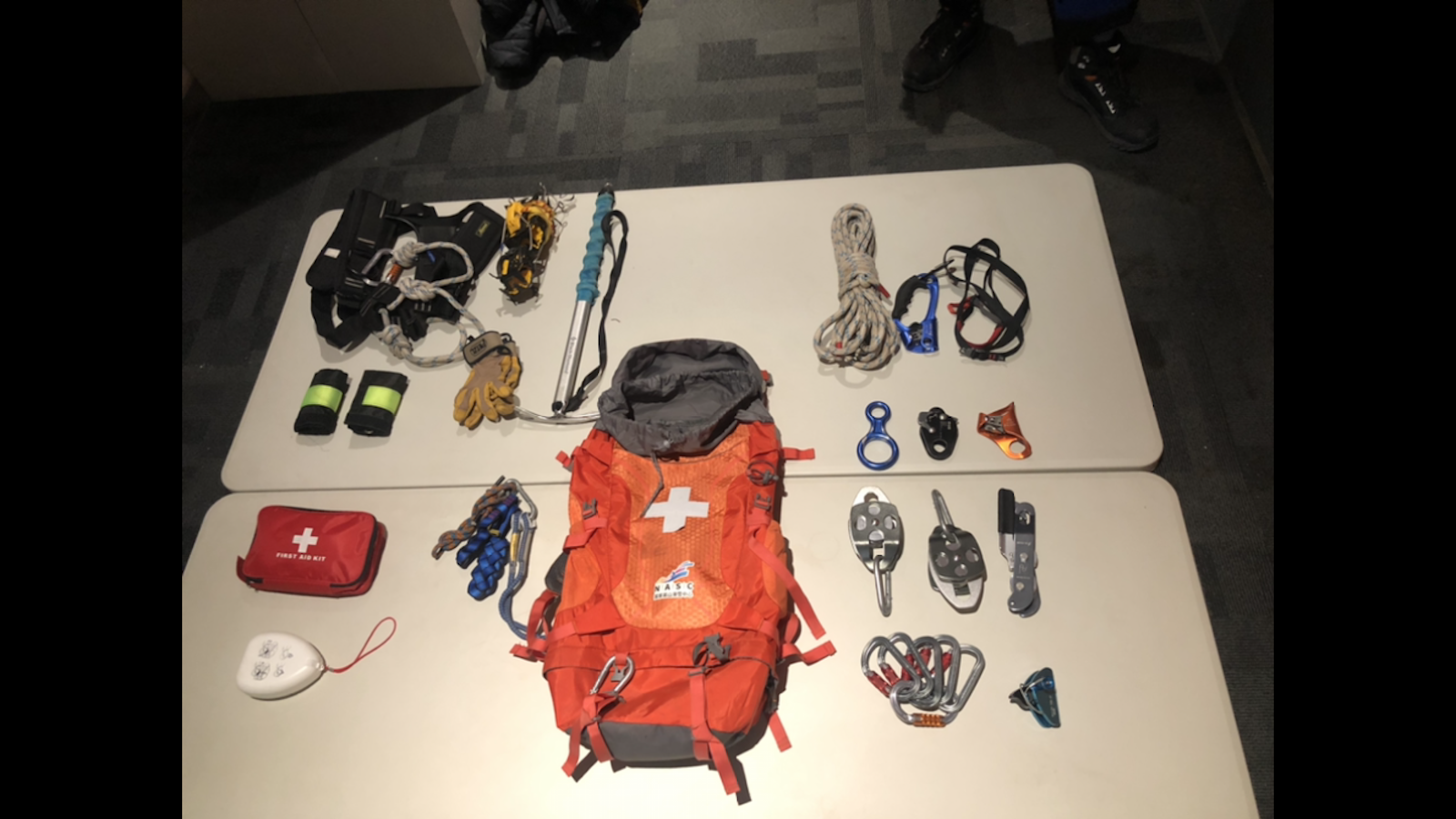 Our primary focus is preparing the local patrol team for emergency response, patient care, and transport. We practice unique situations such as skiers entangled in safety nets and safely conducting rescues on a water-injected snow surface [a very icy, slick layer of snow designed to maintain speed and shape despite heavy use]. Rope-assisted rescues, helicopter extraction, and toboggan-handling techniques are also incorporated into our days.

Outside of that, mountain and course safety for the 2022 Olympic ski events is our priority. The trails are covered with miles of safety nets and pads. We spend time making sure they are properly installed and in the correct places in order to work effectively if needed.

What do you expect your days to be like during the actual games?

A successful day will actually start the day before. We’ll be given a detailed weather briefing, discuss any concerns, and highlight the positives. The morning of the games, we assign the patrols, go over timing for training and events, and discuss any changes in the original plan. The day is general spent responding to medical needs and being prepared for anything.

Is being an Olympic patroller different from being a Palisades/”regular” mountain patroller? 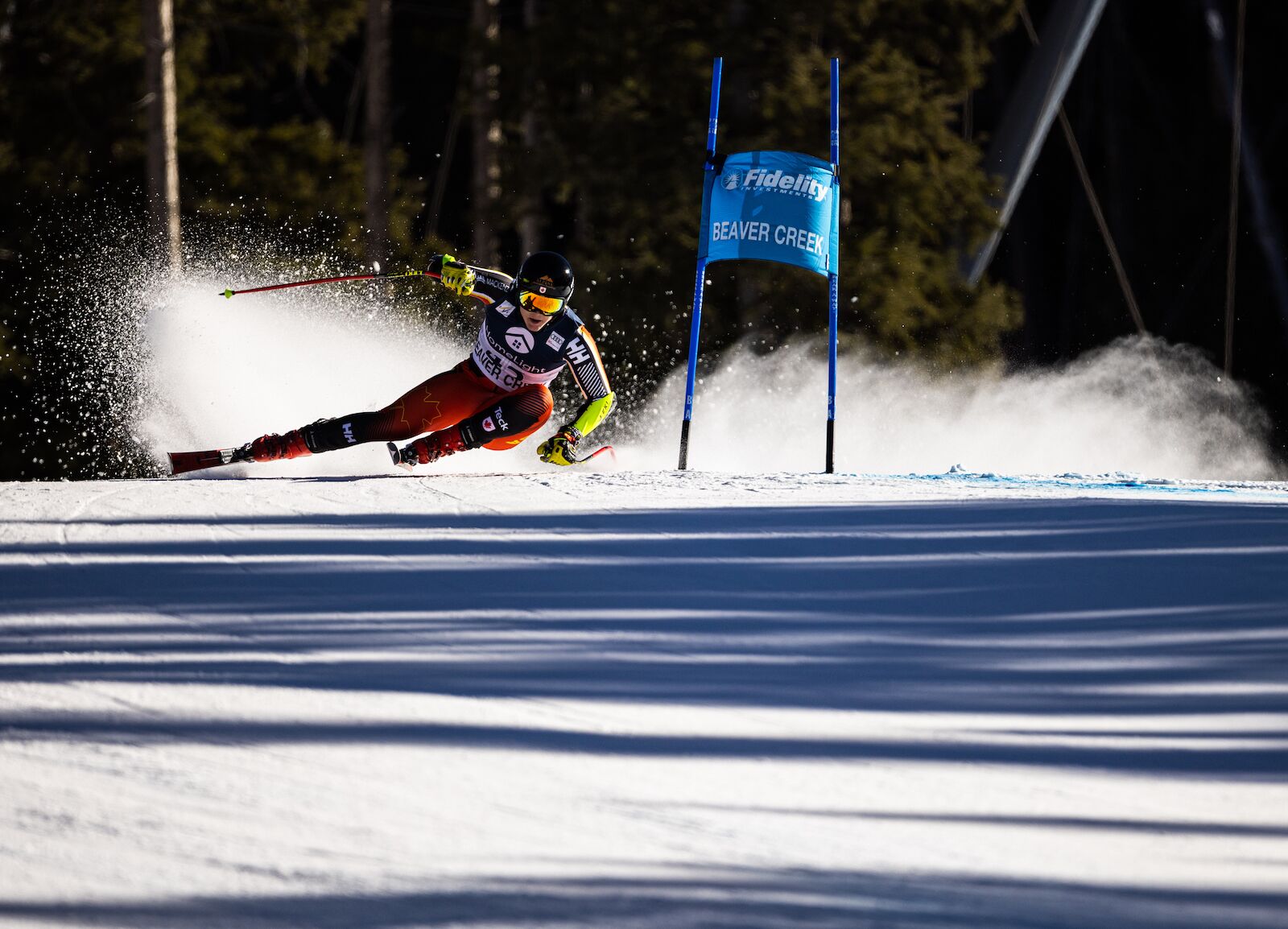 In some sense, yes. We don’t have the concern of thousands of random skiers getting themselves into bad situations, nor do we have the challenge that comes with significant snow. This venue is strictly a race venue. We may not see as many injuries, but the ones we see can be serious. [Editor’s note: athletes completing in the Olympic Games Super-G event can regularly reach speeds of 85 miles per hour.]

How many of you are on the team? Does everyone speak English?

The international patrol team has two primary groups. I am part of the training team (myself and three other Americans) who arrived in November to help prepare the local patrol team. Starting on January 23, 22 additional international patrollers will arrive from around the world to support the local team and meet the FIS [International Ski Foundation] requirement for minimum number of rescue personal on the mountain. It’s a group of men and women coming from six additional countries plus China, and I believe most people will speak a basic level of English to help us communicate on the mountain.

Events are at the National Alpine Ski Center (NACS), a custom-built alpine race venue in Yanqing. It has separate base lodges, five gondolas, four chair lifts, and three surface lifts. There are separate slopes for the technical events (slalom and giant slalom) and speed events (Super-G and downhill) and each has at least one training run plus the official race course. There’s a separate venue at an already existing resort (Genting Snow Park) for events like halfpipe and slopestyle.

Where do you stay? Do you socialize with other staff? Athletes? What’s it like behind the scenes?

We’re in Yanqing, 1.5 hours north of Beijing. We’re actually in a beautiful five-star hotel: the Crown Plaza. Living in a hotel for months sounds like a nightmare but the extended stay is just part of the deal (imagine the reward points!) I consider it my massive 200-room house. I share a restaurant/dining room with lots of friends, we have several different lounges to kick-up our feet, and a fitness center to burn off the occasional beer(s). When the day is done, I retreat to my private room with a king-size bed, walk-in shower, soaking tub, cozy couch, and office space. 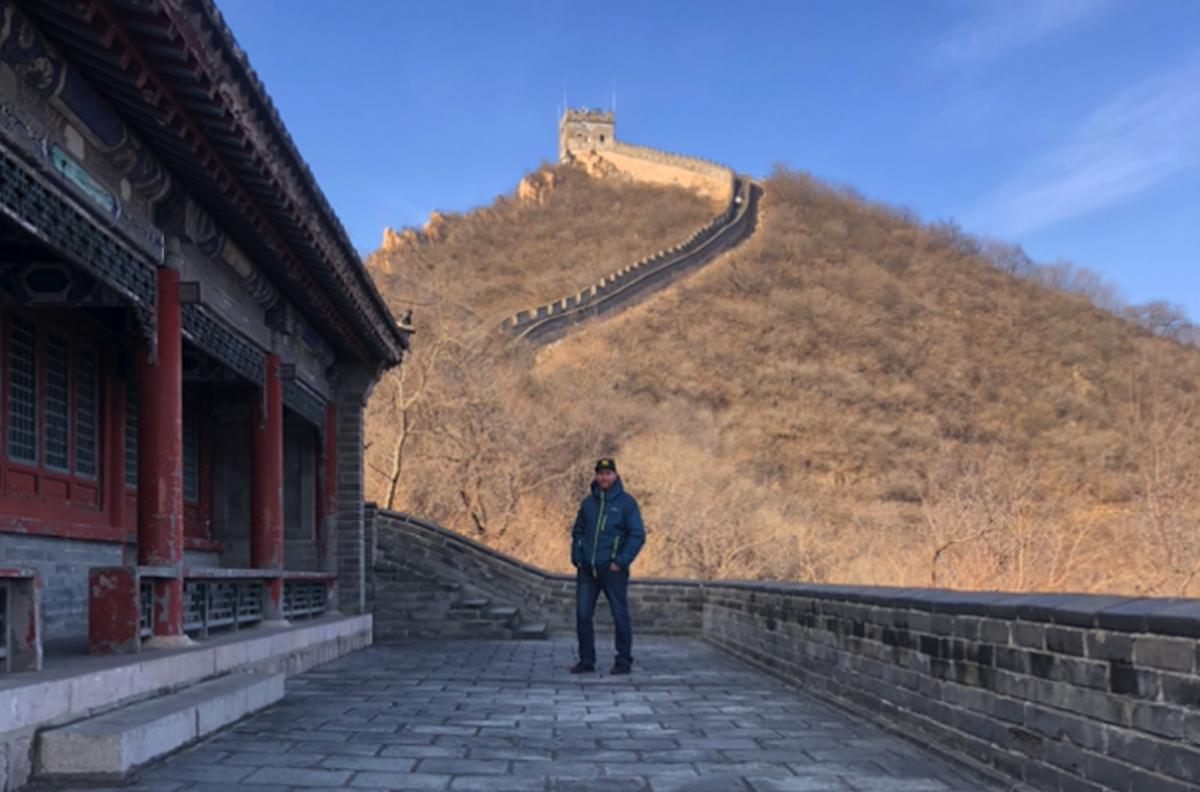 I’m in the same hotel with snowcat [snow grooming machine] operators and race crew. We have the opportunity to go out to dinner as often as we would like. Days off are a balance between soaking in the local area, taking care of laundry, and recouping from a long week. Sites like the Great Wall of China are only a 15-minute cab ride away and there are endless restaurants and shops within walking distance of the hotel. Lodging and meals are included as part of our compensation, so we only have to cover our expenses if we go out to dinner.

What has been your favorite thing about China so far? What surprised you the most?

The excitement that surrounds the Olympics speaks for itself. Being involved in the Olympics is about the connections with the people of China and the world. This experience is about the memories of teaching locals basic English, learning about the culture, and eating unfamiliar foods. It’s about sharing a part of my life that I love so much with great people halfway around the world. Doing so in a different language and remembering that as much as I am here to teach them ski skills, they can teach me even more.

What comes next? Will you start ski patrolling at all Olympics? Come back to your home mountain?

I have made some incredible connections in China, and the winter games of Italy in 2026 are certainly on my radar, but it’s too early to tell. For now, I’m looking forward to a couple days of rest and relaxation, time spent telling stories and catching up with the ones I love back home. I plan on having an amazing spring season with the Palisades Tahoe Ski Patrol, sharing this incredible journey and hopefully inspiring others to adventure whenever they have the opportunity.

News10 Photos of How the Winter Olympics Have Changed Over the Years
Tagged
Outdoor Ski & Snow Beijing, China
What did you think of this story?
Meh
Good
Awesome