I’ve lived everywhere from Windhoek to West London, Abuja to Aachen, but up until five years ago, I had never traveled on my own. The very idea brought me sweat-dripping discomfort. During a period of disquiet and dissatisfaction with my life in London, however, I took the plunge and booked a ticket to Central America for my first large-scale solo journey. The beach boosts my mind and lifts my spirit, so when I need replenishment, I go to the ocean. This time, I wasn’t going to let a lack of companionship stop me.

Armed with one suitcase, I headed to Costa Rica in 2015. I booked accommodation for the first few days; other than that, I indulged in very little other planning. Hawaiians say “let’s go holoholo” when embarking on a long day at the beach or blissfully cruising around the islands. There is no set destination or aim. The mantra is that it’s not where they plan to go but where they end up. I decided to embrace that lifestyle and ended up in Panama a month later. I loved it so much that I returned to Panama 2017. Little did I know that a chance encounter on this trip would set me on a surprising, ultimately fulfilling, new journey.

The slender isthmus brought many scintillating experiences my way, but one of the most groundbreaking was that fateful Panama City bar crawl on July 29. To add some sizzle to my Friday evening I decided to hop on a liquid tour of the old quarter with just myself for company. I was a little apprehensive about the prospect though. The anxiety brought on by turning up to a party alone is already immense, not to mention in a new city that is still (pleasantly or unpleasantly) unfamiliar to you.

I shouldn’t have worried: The bar crawl hosts, Sonia and Jenny, embraced me from the very start.

“Venetian mask or pirate hat, you choose”, Sonia said. She also placed a “Panama Bar Crawl” badge onto my dress, so I could easily be identified as one of their guests. More revelers poured in, and it was time for the games to begin. We broke the ice by telling sweet truths and untruths that our new friends had to uncover. Reggaeton music blasted through the venue which happened to be spacious enough for a round of limbo or two.

Armed with our plastic swords, eye patches and miscellaneous party regalia, we marched conspicuously to venue two where mojitos provided liquid courage for our next icebreaker task. Questions like “What does love mean to you?” and “If you were arrested, what would your family think the crime was?” opened the door for both bonding and belly laughs.

The giggles continued at the third establishment, Chupitos, a shot bar. As if that wasn’t enough, Sonia and Jenny brought a confetti cannon along for the ride, too. I was already suitably impressed, but the next rooftop bar proved I made the right choice by joining the bar crawl. 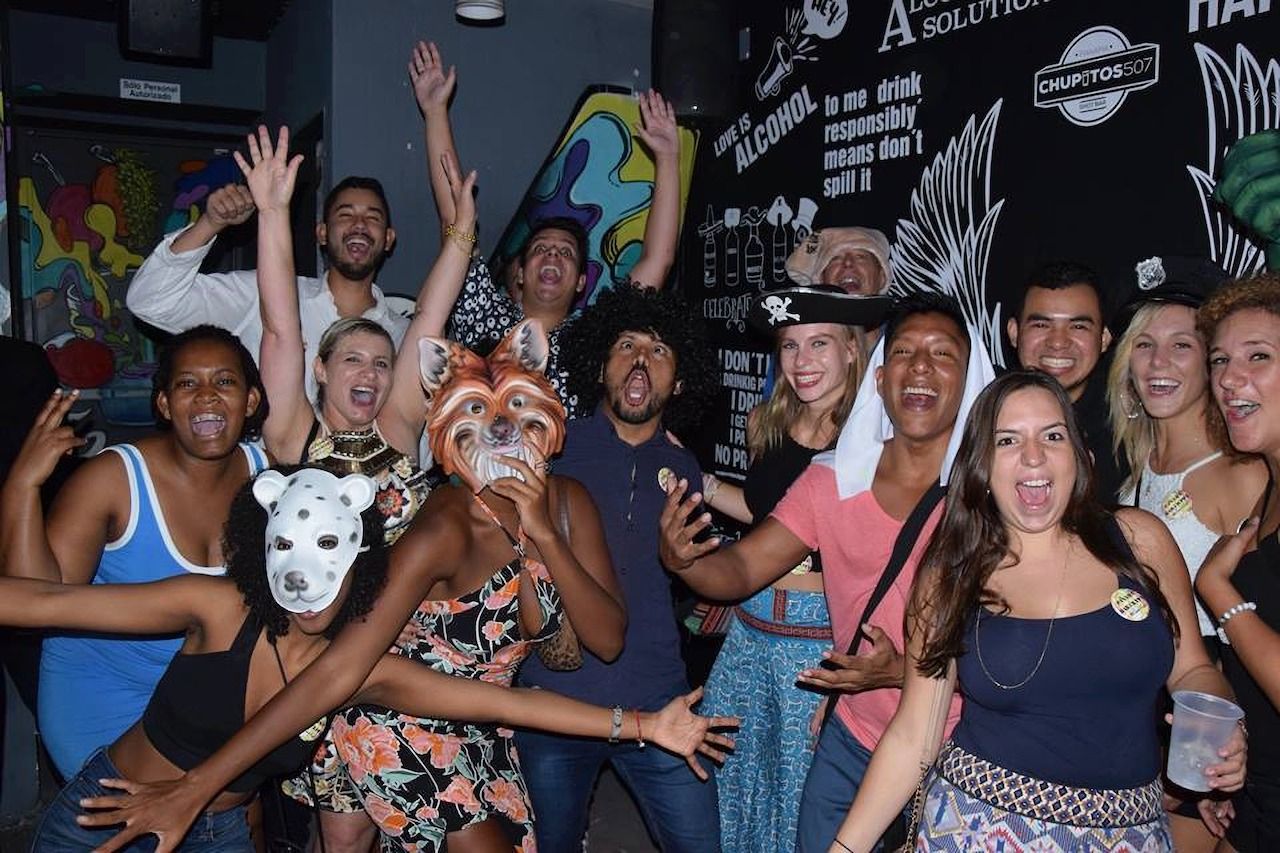 At Tantalo, we swayed with the wind in our hair and looked down at Panama Bay as the stars above in turn watched over us. This is how good life can feel, I thought. Full of beautiful moments that take your breath away. This was a priceless evening with convivial crawlers from all corners but the undisputed stars of the show were Sonia and Jenny who would later become two of my dearest friends.

The day after the crawl Sonia invited me for tea. There I learned that our commonalities went beyond the love of a good boogie. We spent hours discussing loss, debating love, and dissecting our entrepreneurial dreams. A multilingual, multi-hyphenate tour de force, she truly inspired me. Her accolades and activities included krav maga, being a whiz at chess, milking cows, and the ability to make her own goat’s cheese — not to mention that she had flown 5,000-odd miles from Belgium to Panama to start a new life and business.

I told her of my travel plans and uncertainty about my next destination. Without hesitation, she invited me to take up her and Jenny’s spare room in case I fancied calling Panama home for a while. Without hesitation, I accepted. I knew I was smitten with Panama, but I wasn’t sure I could actually live there until that moment. Meeting these women was the cosmic push I needed and the assurance I could make it out there.

Saying yes to Sonia’s proposal turned into a passport to discover more of Panama’s corners. I darted between the capital city and the blinding blue archipelagos. Sonia, Jenny, and I planned our first trip almost instantly, to the islands of Bocas del Toro, where we would feast on decorative ceviche and travel by water taxi from one envy-inducing beach to the next. Our ocean-view apartment in the city was an epicenter of fun, and we soon built a robust social circle of like-minded wanderers. I found my travel companions supportive, luminous, and entertaining; I had truly won the roommate Olympics.

That chance encounter at the bar crawl on one spirited evening would influence my decision to move to Panama on a semi-permanent basis, and that decision has had a powerful ripple effect on every facet of my life. Panama tends to fly under the radar compared to its neighbors Costa Rica and Colombia, so numerous travel writing opportunities came my way as a result of being based there, and my career blossomed.

Being in a physical environment that lit my flames benefitted by my writing, too. I spent afternoons perched in colourful, quaint cafes in the old town where I wrote my life design book Escape to Self. I also witnessed unimaginable beauty: On a secluded two-family island, I saw a bright orange moon slowly setting into the sea. I cured my malaise and learned that I can thrive wherever the wind blows me.

I still carry my “Panama Bar Crawl” badge in my purse as a reminder of that night. As a reminder of what can happen when you take a leap of faith. Sometimes even the most unexpected moments, even those involving pirate hats and confetti cannons, have the power to change your life forever.

Every type of Japanese sex club and what you’ll find inside
The 6 best intimacy and sexual retreats for couples around the world
Orgasm workshops are a thing, and these are the best ones to try
The most romantic couples massages in Las Vegas
How to move to Costa Rica and live there on the cheap

Panama is reopening to international tourism on October 12

Forget the canal. Here are 11 epic ways to experience Panama

Why you should go to Panama

Inside the Darien Gap: An exploration in 19 photos

I lived with a Guna family in Panama. What happened when I left is one of my best stories.

I crashed my drone into a river in Panama

Panama from the air

11 Latina travelers you need to be following on Instagram