Italy’s major appeals are its landscapes, food, and rich history. By taking the best train trips in Italy, you’ll get to give into la dolce vita and enjoy all three at a leisurely pace.

One thing to note: Though the country has a vast and dense train network, there are frequent disruptions, delays, and sometimes replacement bus services, so it’s good to have a zen attitude and a flexible itinerary.

Italy’s first train line was completed in 1839 and ran between Naples and Portici. Although many high-speed lines, known as direttissime or DD, were built during the 20th century, some regional lines, especially in southern Italy, run at the same speed as they did over 150 years ago. These slower lines are referred to as linea lenta, or LL.

For many journeys between major cities, you’ll have the option of taking a fast and direct route or a slower train with more stops. If you have time to spare, do the latter. That way you can crisscross the country unhurriedly, contemplate the scenery, get off when the fancy takes you, and savor a cappuccino at the station bar while you wait for your next ride.

Here are six of the best train trips in Italy that will take you from north to south and along some of the country’s most beautiful coastlines. 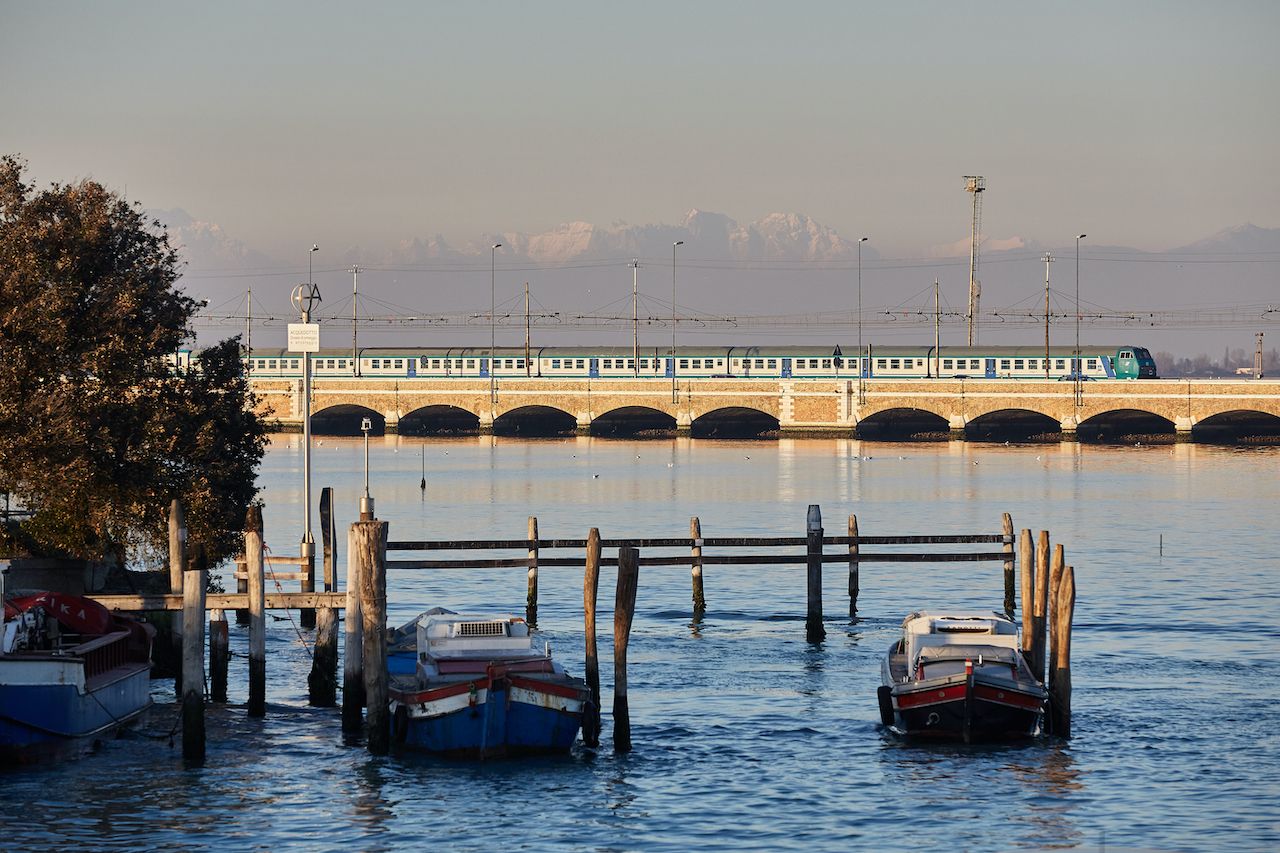 The relatively short journey between Milan and Venice takes you through some must-see cities.

Verona, Vicenza, and Padua all have well-preserved historical city centers worth the stop. In Verona, wander colorful piazzas and stay for an open-air opera in the Roman amphitheatre. In Vicenza, check out the Olympic Theater and the Palazzo Leoni Montanari that’s a mere four-minute walk away. In Padua, don’t miss Giotto’s frescoes at the Scrovegni Chapel and the surrounding gardens.

Perhaps the most memorable part of this train journey is the end when you arrive at the Venice lagoon over a 19th-century railway bridge. For over two miles, you’ll feel as if your train is cruising on water.

Trains along this line are very frequent. The direct train from Milan to Venice takes roughly 2.5 hours and costs about $73. The slower option, which takes one extra hour and includes a brief connection in Verona, is only about $25. If you get individual tickets to make extra stops in Vicenza and Padua, the total price is just a few dollars more. 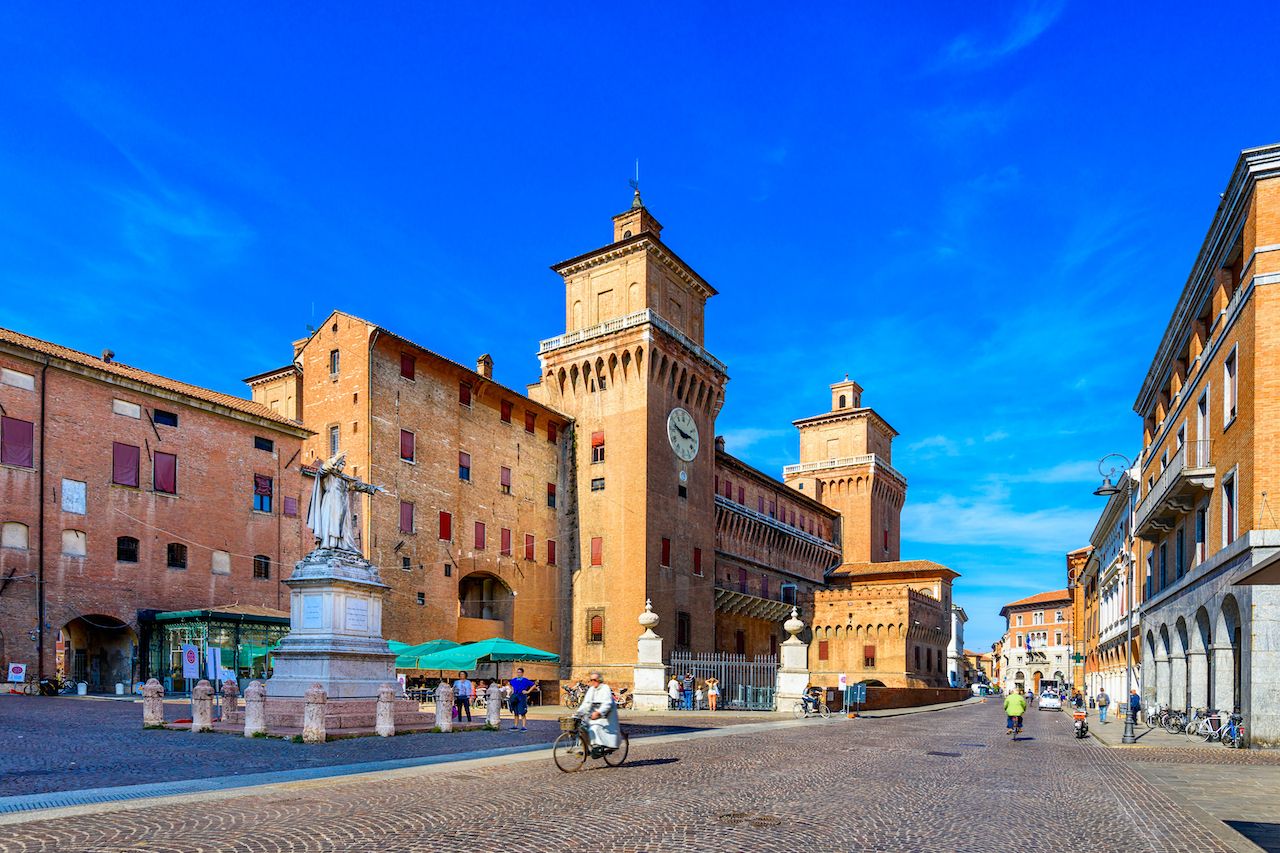 There are few better ways to travel from Venice to Florence than the slow train. It may take twice as long as the fast option, but it’ll give you the chance to stop and explore some of the less touristy towns along this route.

You can visit some imposing medieval structures along the way to the capital of the Italian Renaissance. Stop to see Ferrara’s moated medieval Castello Estense, the seat of the powerful Este family. In Bologna, be sure to eat a plate of pasta al ragù, the Italian name for the spaghetti bolognese that’s named after this city. And when in Prato, visit the Castello dell’Imperatore.

The train journey from Venice will take you through the sprawling region of Emilia-Romagna before guiding you back down to Florence. You’ll know you’re in Tuscany when you see rows of cypress trees snaking along the rolling hills.

The direct route via high-speed train takes about two hours. There are usually seven direct trains per day with prices starting at about $61. The longer journey can take anywhere from three to five hours, including changeovers in Bologna and Prato, but costs a mere $25. 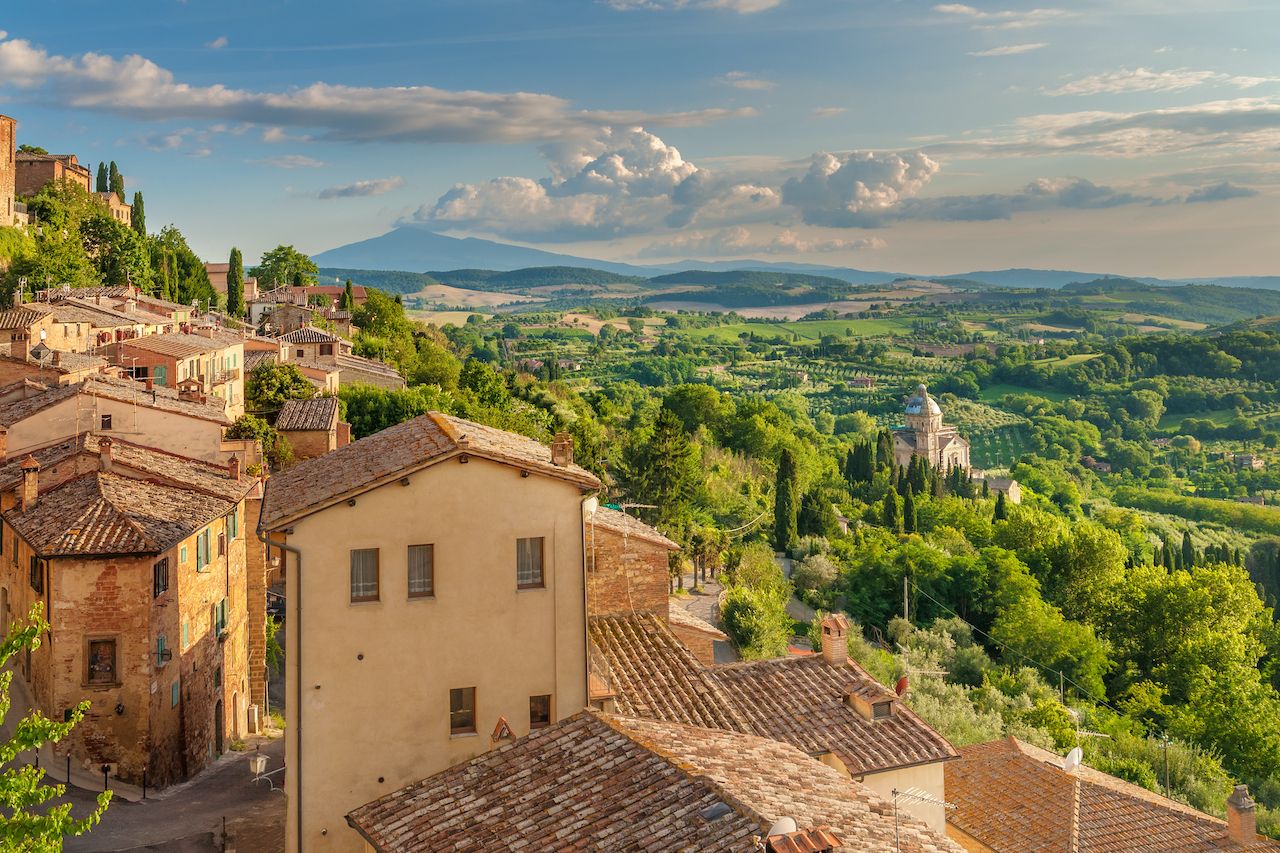 If you close your eyes and conjure up images of Italy, that mental picture is probably akin to what you’ll see from your window on this train journey. Think medieval hill-top villages, bright blue skies punctuated with wisps of clouds above a green and ochre landscape, and crumbling stone churches.

On the journey from Florence to Rome, you’ll pass through Arezzo, Cortona, Montepulciano, Orvieto, and more. All are towns where you’ll find a laid-back atmosphere, great wine, locally-produced meats, pastas, and cheeses. If some of the streets evoke a sense of déjà-vu, it may be because you’ve seen them in films like the Oscar-winning Life is Beautiful (filmed in Arezzo), Under the Tuscan Sun (Cortona), or the Twilight sequel New Moon (Montepulciano).

The direct trains from Florence to Rome take around 1.5 hour and can cost anywhere from $60 to more than $120. The regional trains are much slower (some take up to five hours and can involve a couple of changeovers), but only cost about $27. There are multiple train options every hour. 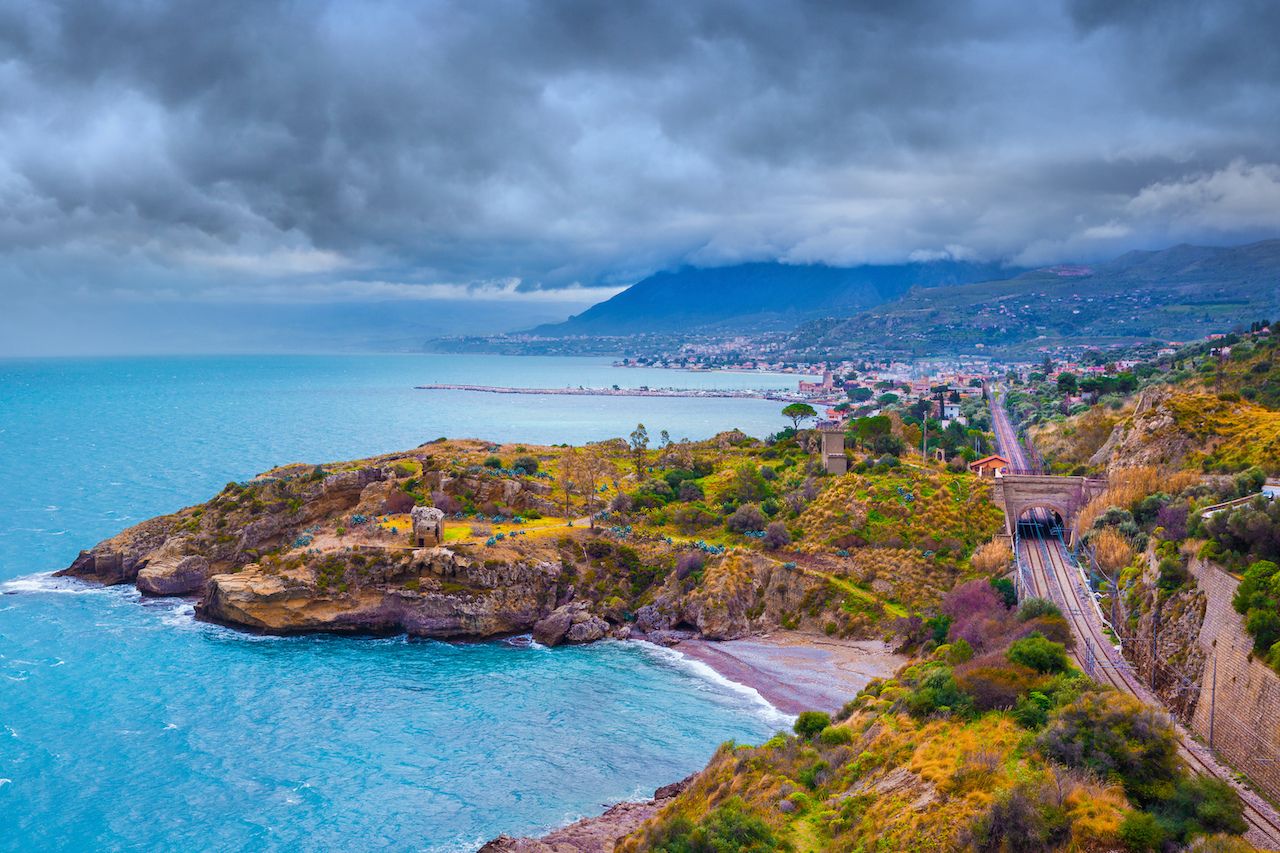 The ride from Rome to Palermo is long, but it’s memorable. The journey covers 500 miles in about 12 hours, and it’s among the few in the world where your train goes on a boat trip.

The train loads onto a ferry equipped with railway tracks in Villa San Giovanni and emerges in Messina, Sicily. You can stay inside or walk up to the boat deck for a coffee and sea views (or to watch the sunrise if you’re on the overnight train).

But before that, you’ll be riding for about six hours through the southwestern regions of Italy: Lazio, Campagna, Basilicata, and Calabria. You’ll glimpse the Bay of Naples and Mount Vesuvius. As you ride south of Naples, the landscape gets drier and more rugged. You’ll have splendid views of the sea as the tracks follow the coastline for most of the way down this section, and again across northern Sicily.

There are 11 trains per day from Rome to Palermo. One option is to take the Intercity Notte and ride overnight, so you save on accommodation. These trains were recently refurbished, so they’re modern and comfortable. Journey times vary from 10.5 hours to over 13 hours. Prices start from as little as $40 if you book well in advance.

Best train trip in Italy #5: The villages of Cinque Terre 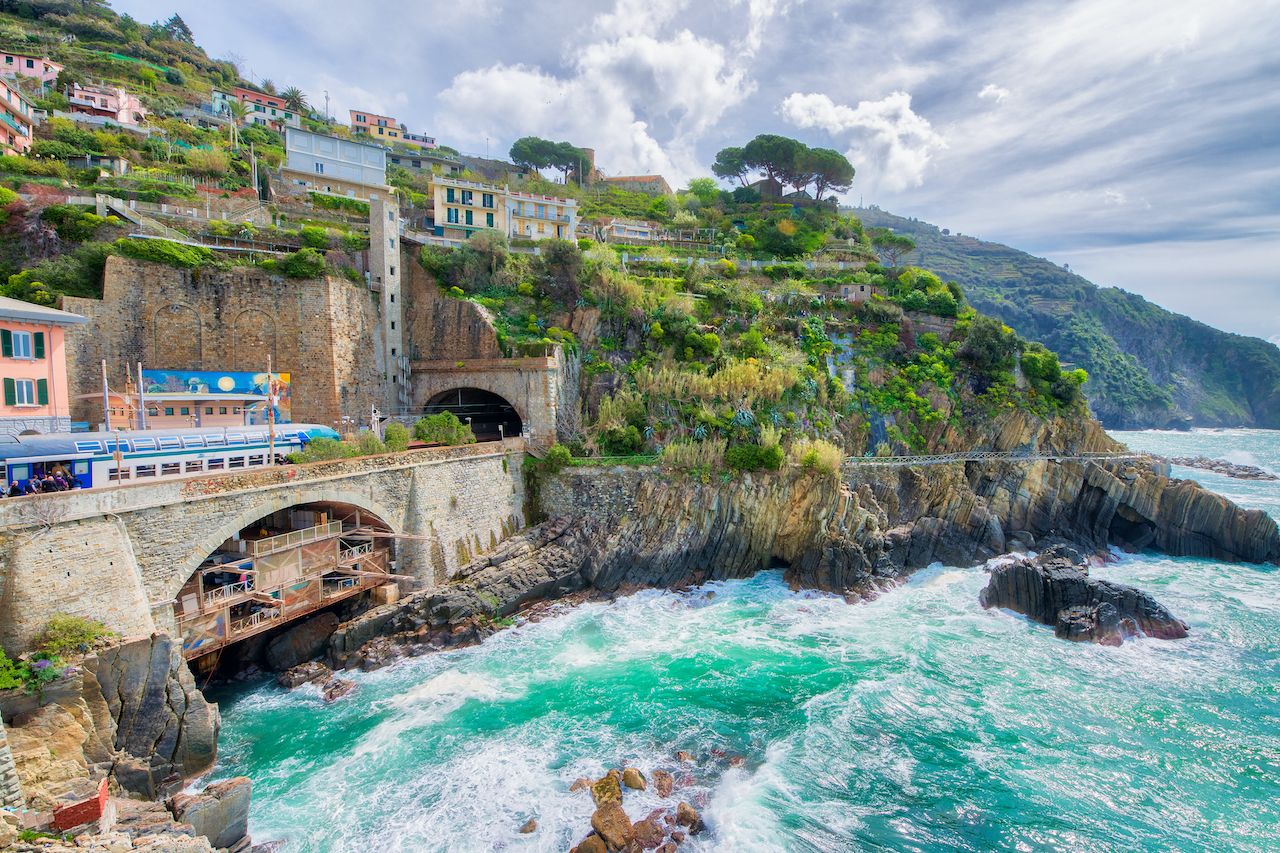 If the train journey from Rome to Palermo seems too daunting, going through the area known as Cinque Terre is a much shorter option with equally fantastic views of Italy’s coastline from Levanto to La Spezia.

Cinque Terre, or Five Lands, refers to the five colorful coastal towns that you’ll pass: Monterosso al Mare, Vernazza, Corniglia, Manarola, and Riomaggiore. All five have been declared UNESCO World Heritage sites. Take an entire day or two to hop on and off this little train, visit the towns, and sample the local goods like Monterosso’s special anchovies and Corniglia’s honey ice cream.

Starting in Levanto, with no stops, the journey will only take between 20 to 40 minutes depending on the train, and it costs about $13. Sit on the right side for the sea views and on the left for a closer look at the vineyards and olive groves that characterize this steep, rugged landscape.

Best train trip in Italy #6: Bari to Otranto or Gallipoli 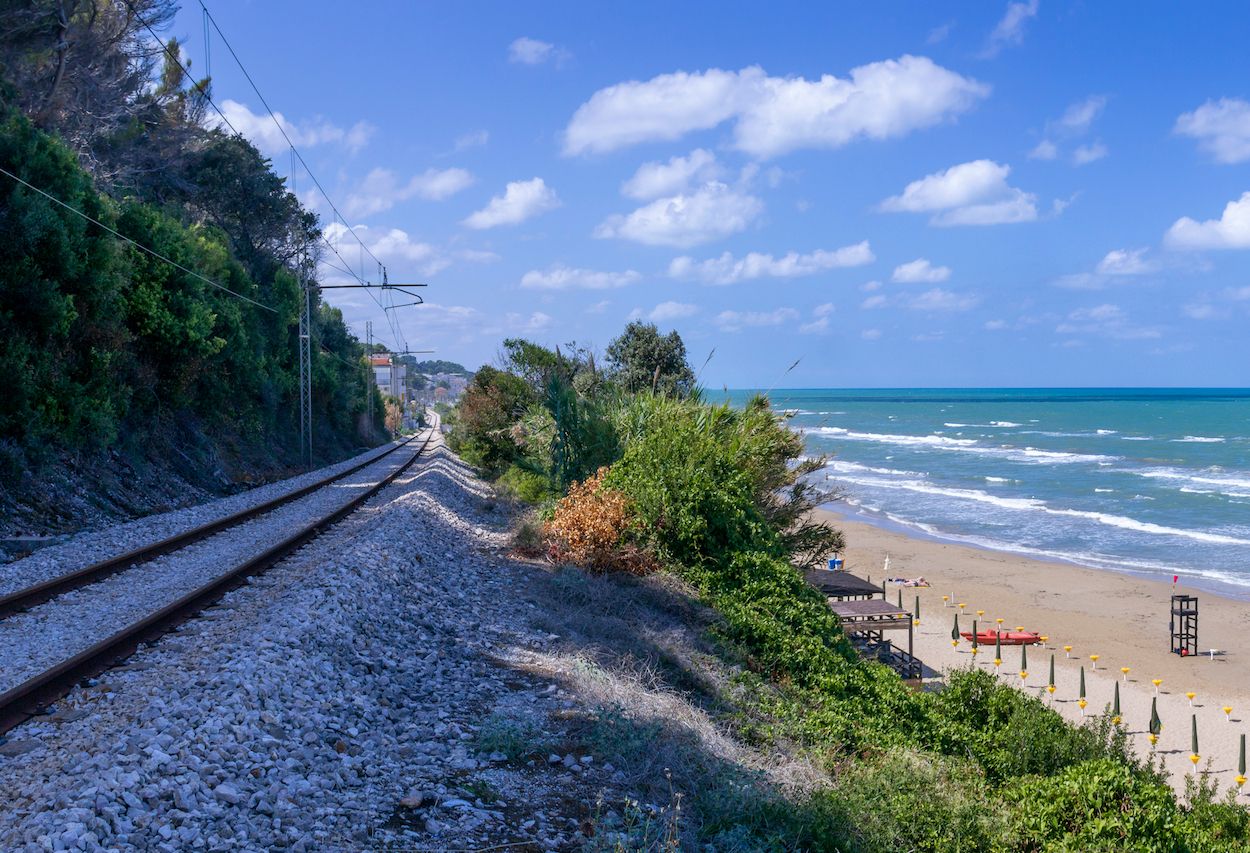 It’s impossible to grasp everything that’s contained in Italy’s heel in one straightforward journey. You’ll be hard-pressed to find a more surprising and varied region in Italy, and the best way to discover it is to zigzag along its train tracks.

Start in Bari. This fun port city has multiple train stations, so be sure to double-check which one you’re leaving from. First head to Alberobello, known for its cone-shaped-roof houses, or trulli. Five miles and a few minutes away by train, Locorotondo has taken a very different approach to architecture. Its cummerse (narrow white houses with pointed gable roofs) are more reminiscent of buildings in Flanders than anything Italian. As the town’s name suggests, it is also surprisingly round, with curved streets that hug the contours of the hill on which it sits.

From here, you can ride southeast to Ostuni, although this will likely involve a couple of changeovers. Ostuni is a medieval labyrinth of narrow streets and staircases known as La Città Bianca (the white town) because of its lime-washed houses. Less than an hour’s ride away is Lecce, a beautiful Baroque city that studs Italy’s heel. End your journey on the coast by traveling east to Otranto or west to Gallipoli. Both towns have imposing fortifications, seafront promenades, and turquoise waters.

Most of these trips will take you through dense olive groves. Puglia is home to 60 million olive trees and produces about 45 percent of all Italian olive oil. The journeys between towns are generally under two hours and cost very little — less than $15. Note that the trains on this route are old, so don’t expect air conditioning.

CultureTrieste Is the Coolest Italian City You’ve Never Thought of Visiting
Tagged
Train Travel Italy
What did you think of this story?
Meh
Good
Awesome